The Dell Precision 7920 Tower is a power-driven workstation (dubbed by the company as “the world’s most powerful workstation” no less) designed to handle complex and demanding applications with a huge focus on being able to scale as organizations grow. This is most evident in its extensive customizable options, as configurations range from $2,000 to tens of thousands of dollars. Businesses of all sizes will certainly be able to create a system that best suits their needs.

The Dell Precision 7920 Tower is a power-driven workstation (dubbed by the company as “the world’s most powerful workstation” no less) designed to handle complex and demanding applications with a huge focus on being able to scale as organizations grow. This is most evident in its extensive customizable options, as configurations range from $2,000 to tens of thousands of dollars. Businesses of all sizes will certainly be able to create a system that best suits their needs.

For example, memory options range from 16GB all the way up to 3TB of 2666 MHz RDIMM/LRDIMM RAM, which uses 6-channel memory architecture when using select CPUs. In addition, it comes equipped with the latest Intel Xeon processor Scalable family, which features up to 28 cores per processor or a total of 56 cores when customized with Dual processors. For storage, the 7920 uses a new FlexBay design with up to ten 2.5″ or 3.5″ SATA/SAS drives or up to four M.2 or U.2 PCIe NVMe SSD. The workstation also leverages the hot-swap feature for the M.2 and U.2 PCIe NVMe SSDs, allowing you to actually remove the drives without having to shut down the 7920. 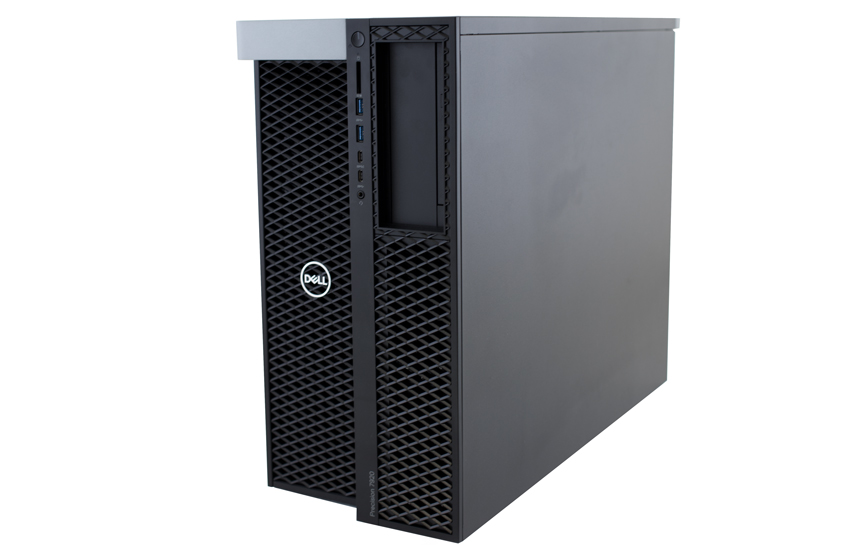 The Dell Precision 7920 Tower also features a huge choice for graphics cards. You can equip the workstation with NVIDIA or AMD cards like the entry-level 2GB Quadro P620 and Radeon Pro WX 2100 cards or the mid-range 8GB NVIDIA Quadro P4000 or Dual Radeon Pro WX 5100 cards. Those with unlimited budgets can go all out with the 32GB Triple NVLink NVIDIA Quadro GV100 option, which adds over $30,000 to the build. There are dozens of other GPU options to choose from.

With a starting weight of 45 pounds, this tower is a monstrous machine that measures 17.13″ high x 8.5″ wide x 21.46″ deep. The Precision 7920 packs a ton of power inside this beefy chassis that is arguably suitable for self defense. Much hasn’t changed from his predecessor as its design goes: it features a both HDD and a front bezel (which can easily be removed) and connectivity is stacked vertically in the center. The 7920 is also comes with a same handle protruding at the top left, making it easy to transport or move around in the office.

For connectivity and functionality, the front panel features a Power button/light, a drive activity light, an SD card slot, 2x USB 3.0 ports, two USB 3.0 Type-C ports (one with PowerShare), a headset port, and an optical drive tray. The panel can be easily removed to access the drives while the PCIe sled allows for easy access/replacement of the M.2 drive.

Our review unit is equipped the uber-powerful NVIDIA Quadro RTX 8000 high-end professional graphics card. Priced at roughly $5,500, the RTX 8000 has whopping 48GB of high-speed GDDR6 memory and supports NVIDIA NVLink. It also features 4,608 CUDA and 576 NVIDIA tensor cores, making this a powerful GPU for artists and designers that is VR capable. 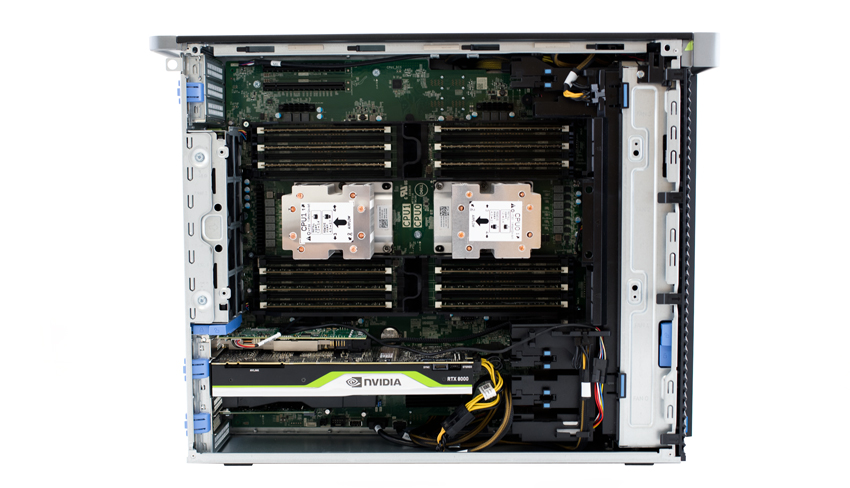 The Dell Precision 7920 showed us some very impressive results for a desktop workstation. It is hugely customizable with configurations ranging in price from $2,000 to tens of thousands of dollars, which will certainly allow organizations to build a system that best suits their needs and budget. Options include many different professional graphics card options ranging from entry level cards like the Radeon Pro WX 2100 and NVIDIA Quadro P1000 to expensive, high-end ones like the Radeon Pro WX 9100 and the NVIDIA Quadro RTX 8000. For memory, options range from 16GB all the way up to a whopping 3TB of RAM, while processors include the latest Intel Xeon Scalable family with up to 28 cores per processor or a total of 56 cores when customized with Dual processors. Storage options are plentiful as well. Needless to say, this is a highly scalable workstation.

The configuration of our Dell Precision 7920 was a bit unique in regards to its processors, being dual Intel Platinum 8260 CPUs. These are nearly top of class server-grade CPUs, with 24 cores each (48 cores combined). In a server or a highly multi-threaded application setting, these perform very well, but for some more traditional workloads they can actually start to force some corner cases. This was the case with some of our benchmarks, that were never designed for such high core count CPUs. With that in mind, to gauge its performance, we put the 7920 through two distinct graphics-intensive workstation benchmarks (the SPECviewperf and SPECworkstation) and compared it to the Dell Precision 7740 mobile workstation, which we reviewed last  year. Looking at the graphics-intensive SPECviewperf test, the 7920 unsurprisingly demonstrated outstanding performance in all categories and shined in Snx-03 (501.21), Maya-05 (335.9), Catia-05 (312.07), and 3dsmax-06 (261.27).  In our SPECwpc benchmark (which gauges CPU, graphics, I/O, and memory bandwidth performance) the 7920 didn’t fair as well comparatively, but was more related to the way multi-threading is handled with the benchmark. While it demonstrated its ability to perform under intensive workloads it didn’t quite hit the high numbers one might expect, but this was more a trade off of the CPUs selected, not the platform.

Overall, the 7920 is a highly customizable workstation offering some of the best hardware options on the market. It performed well in our workstation-class SPECviewperf  and SPECworkstation benchmarks, although with a slightly more toned-down processor it would most likely yield even higher results.