The Dell UltraSharp U4320Q is a massive multi-client monitor that offers a high-end 4K experience. This is a display that offers some pretty unique functionality, including the ability to simultaneously display content from up to four different inputs in FHD (1920×1080), as well as from a single input at a 4K (3840×2160) resolution, which essentially does the work of four individuals monitors in a single frame.

The Dell UltraSharp U4320Q is a massive multi-client monitor that offers a high-end 4K experience. This is a display that offers some pretty unique functionality, including the ability to simultaneously display content from up to four different inputs in FHD (1920×1080), as well as from a single input at a 4K (3840×2160) resolution, which essentially does the work of four individuals monitors. 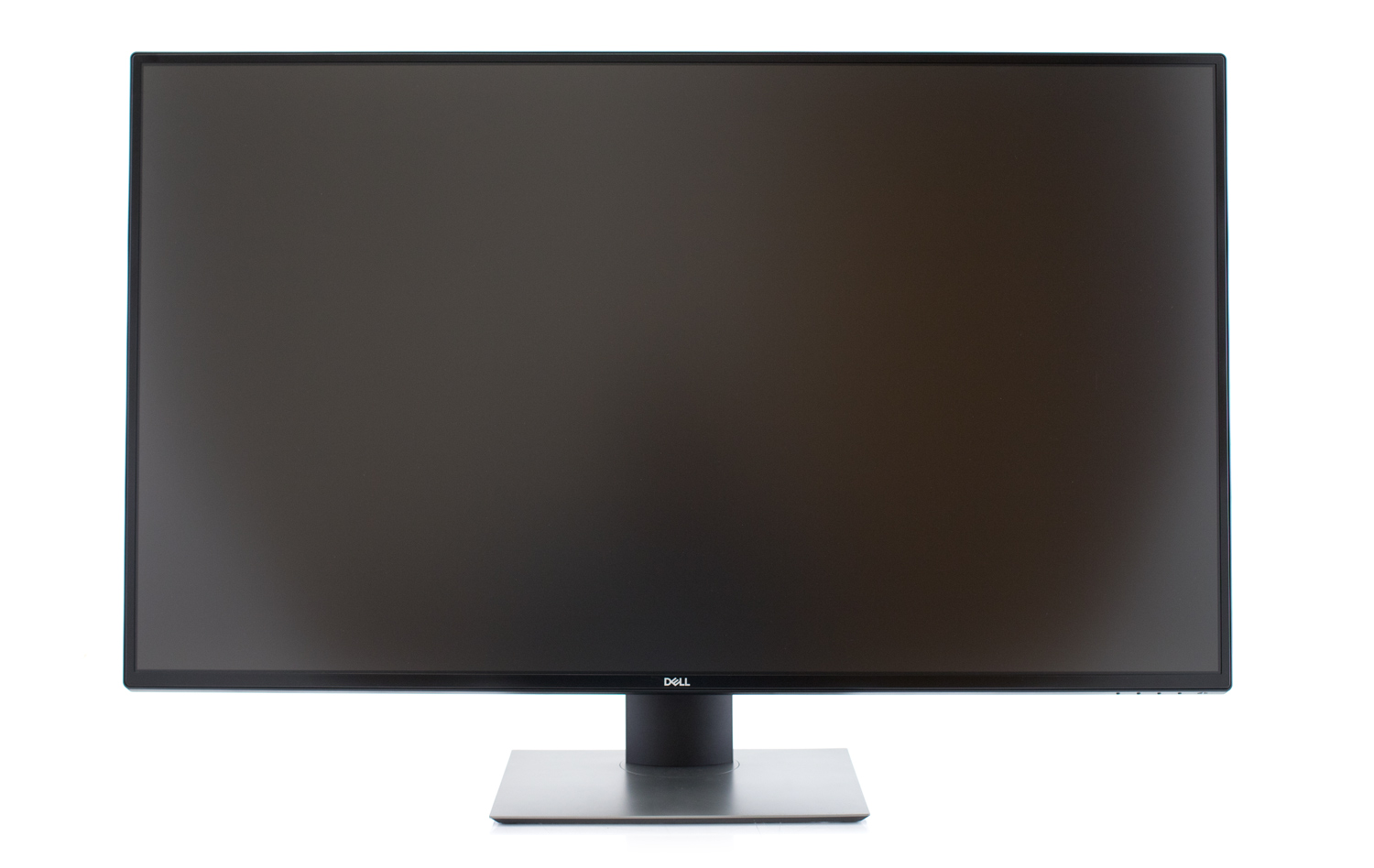 There are many professionals looking for a 4K display with a huge amount of real estate, like those in the financial industry that need to have trading screens up while monitoring alerts or those who need email and web browser visible while creating a PowerPoint presentation. Creatives also might want a 4K monitor with a ton of real estate. However, the Dell monitor is also ideal for those who need to look at multiple computer screens simultaneously.  These types of professionals focus less on the color accuracy aspect of monitors and more towards feeding multiple sources into one panel to monitor at once, an area in which the U4320Q certainly excels. For example, IT administrators can use the four discrete inputs to manage multiple workstations or servers without needing to switch between inputs.

From a hardware perspective, the 3840 x 2160 (16:9) display features an active-matrix, thinfilm transistor, LCD, and LED backlight, while fully supporting lower resolutions for those who need it. It’s also highlighted by its wide-viewing angles at 96% sRGB color, flicker-free screen and Dell’s ComfortView technology (reduces up to 60% of blue light emissions), allowing for a pretty comfortable viewing experience.

The UltraSharp U4320Q comes with a range of connectivity, including two HDMI ports, two DP Ports, and four USB ports (including two Type-C). This allows you to drive out four displays using a single U4320Q monitor using a thin client, which is an impressive feat. Additionally, USB-C provides up to 90W of power to keep compatible laptops charged while in use. It also uses a single USB Type-C to supply power to compatible notebooks while simultaneously receiving the video signal.

At 43 inches in size, this certainly isn’t a monitor for everyone and you’ll need a relatively large workspace to properly use it. That said, the base is very small for its size, which minimizes the amount of surface area needed for this massive monitor. It also features removable pedestal and VESA 100 mm and 200 mm mounting holes for more mounting solutions. 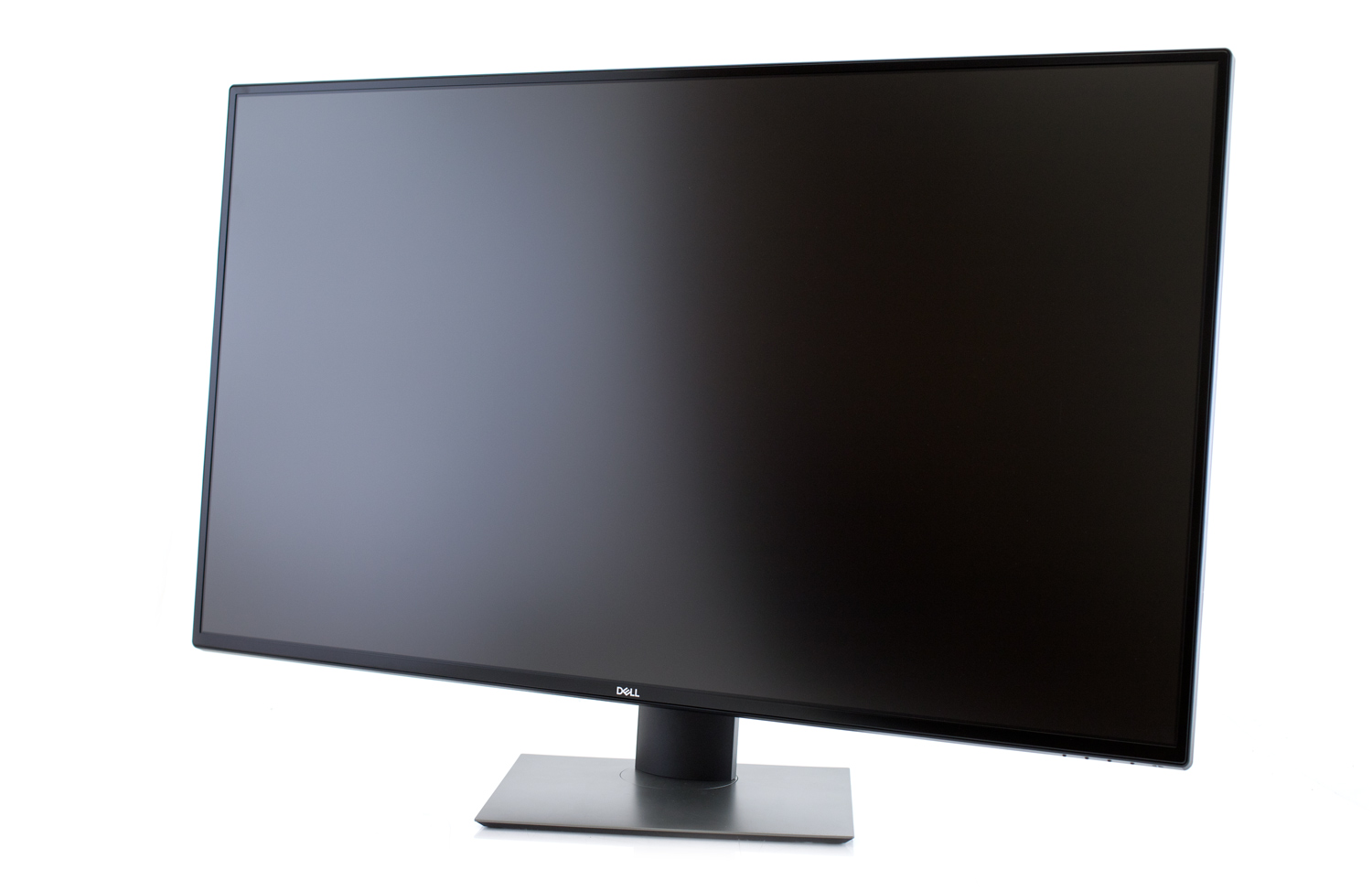 We placed it on one of our corner desks, situated to be connected to different thin clients and notebooks being tested. With its width and height, it really needs a spot carved out for it. In terms of build quality, the U4320Q is a beautiful piece of technology. It features an ultra-thin bezel, which minimizes a bulky bezel that might add further clutter to the viewing experience.

The stand is height adjustable (which is something you really don’t see with larger monitors) and you can tilt, swivel and adjust the display to pretty much any way you like it. While we were testing it, we loved how versatile and simple it was to maneuver coupled with how easy it was to put it together; you just need to snap the monitor into place using the quick release slots at the back of the monitor panel. And as we indicated above, there is also a variety of mounting options with the bundled stand and VESA holes. 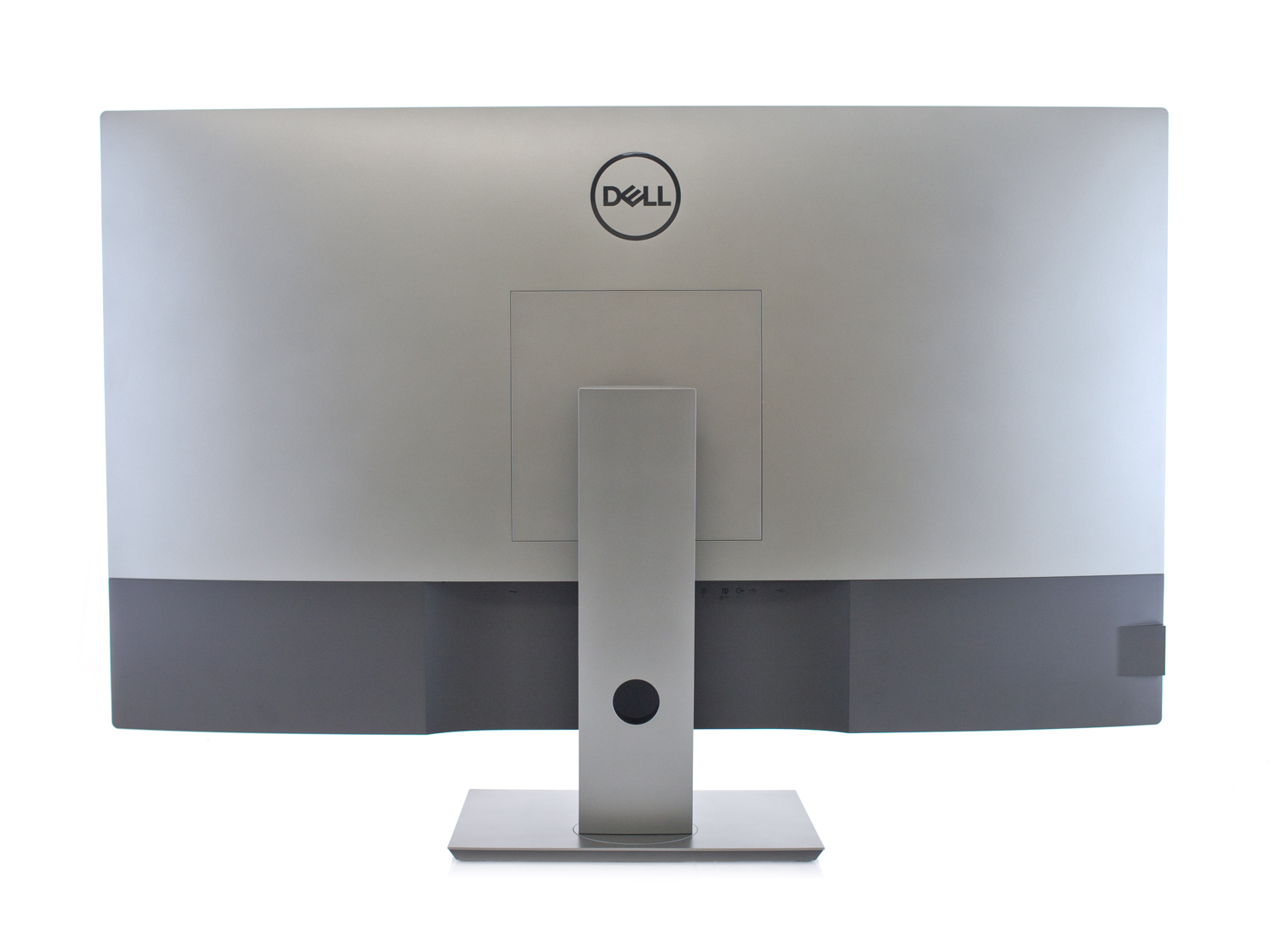 As far as connectivity goes, most of it resides on the back underside of the monitor, including The AC power port, security lock slot, two HDMI ports, two DP ports, a USB Type-C/Display port, audio port, and dual USB Type-A ports. The two USB 3.0 downstream ports are located on the side of the monitor. 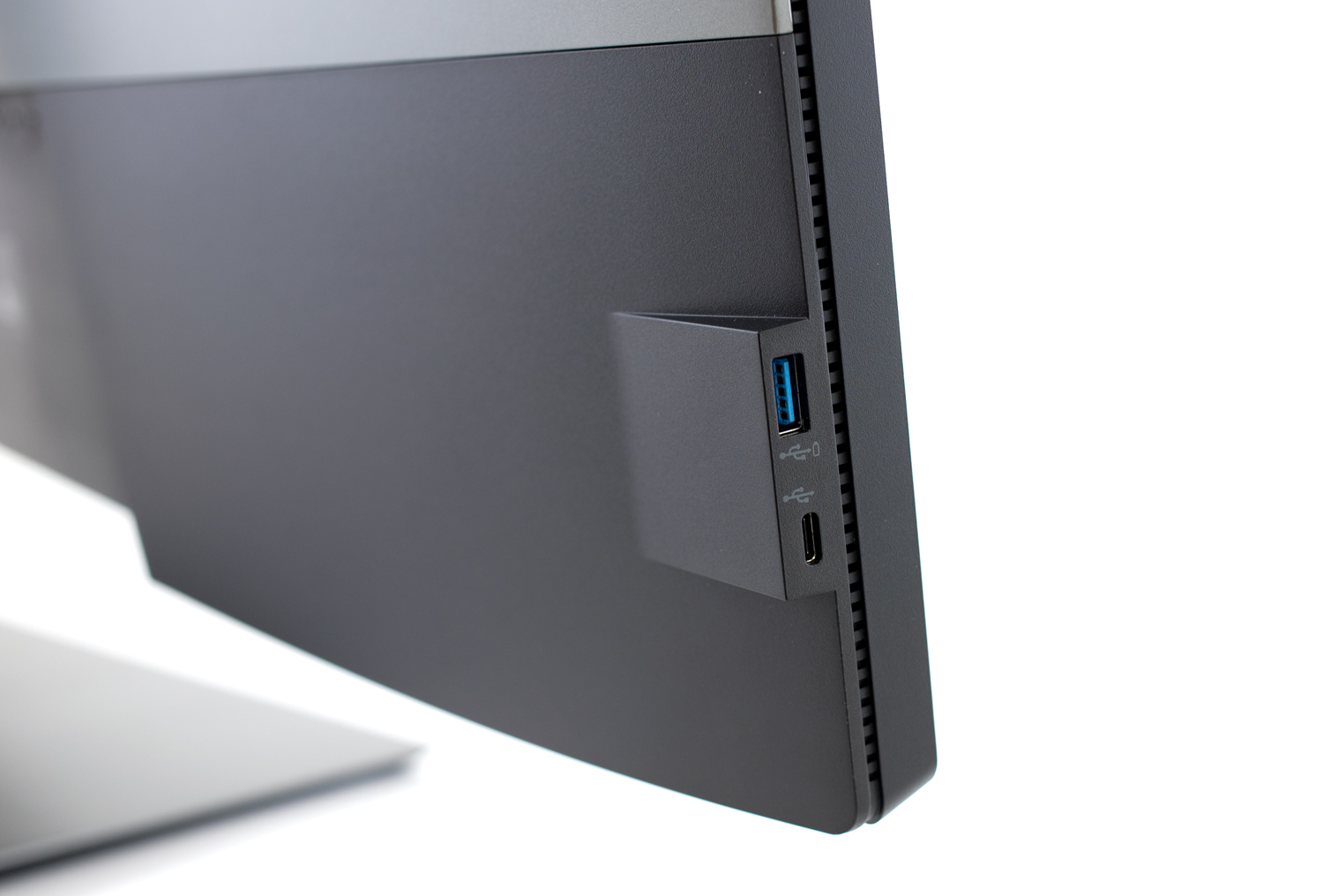 The U4320Q also features built-in speakers (2 x 8W) from New Sunlink. They don’t produce room filling sound, but for viewing videos or participating in conference calls they shine without requiring additional items on your desk (if they still fit with this in place).

We had the chance to do some multi-input testing during our HP t740 Thin Client review. The monitor was easy to get setup with multiple inputs and in quad-screen mode was very useful for multi-tasking. Displaying four screens at once helps in multiple system workflows, or even in certain single system workflows with multiple monitor outputs. Different habits of multitasking can be consolidated into one monitor, allowing someone to monitor multiple systems at once without needing a KVM platform.

In terms of managing the monitor, the control buttons are located underneath the front of the U4320Q and are used to load preset modes, input sources, the OSD menu, exit and power on/off. Once you access the OSD, however, they function as the navigating buttons for the menu system.

The U4320Q uses the same clean black, grey and white layout OCD as previous Dell monitors (e.g., P2720DC), so everything was familiar to us. We found it very easy to navigate and read the onscreen text, while things loaded instantly, allowing us to quickly access what we want and get out.

To lock the menu and power buttons, you simply need to hold the Exit key (located by the power button) for 4 seconds; a very useful function if you don’t want to worry about accidentally changing settings on the monitor. Just hold it for 4 seconds again to exit the lock mode.

Overall though, from a usability perspective we tossed a lot of work at this monitor. The t740 thin client use was key, proving out that one thin client can drive four displays. And of course the more casual daily use in the lab as the main display for the bevy of notebook workstations, thin clients and even edge IoT devices performed as needed.

In the following section we go over some testing with did with the Dell P4317Q. While not the exact same model, the monitor is the same in all ways except the USB-C support and usage. The older 17 model used the same panel and platform (including split monitor capabilities). 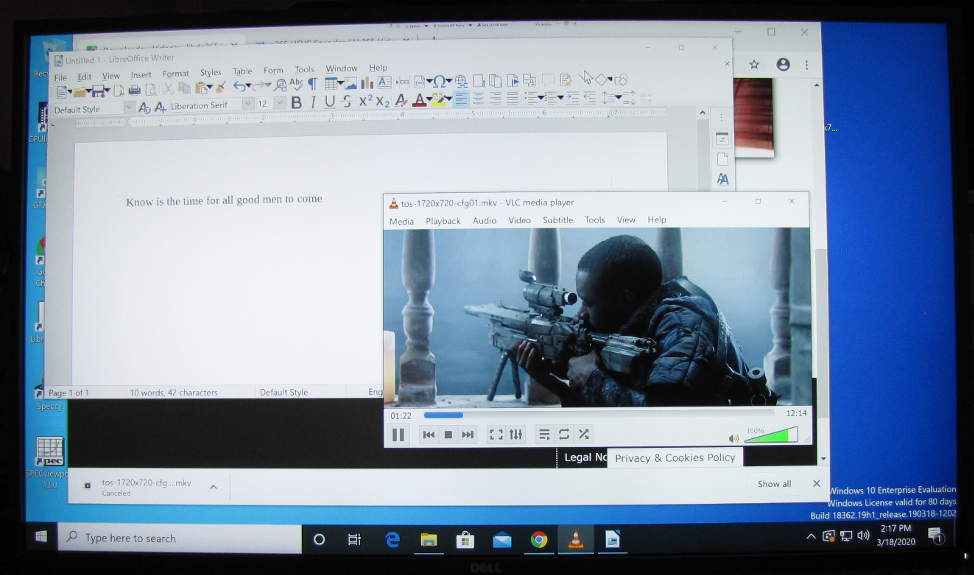 We next used the Dell P4317Q monitors picture-by-picture (PBP) feature to display 2 x FHD (1920×1080) displays on it and connected the monitor to the device using the expansion card. Then we connected to the GPU enabled virtual desktop and displayed to both of the monitors. The device attached to the virtual desktop without any issues. We then played a 1080p video to stress the Wyse 5707 and worked with LibreOffice documents. During this testing we didn’t notice any degradation of performance. 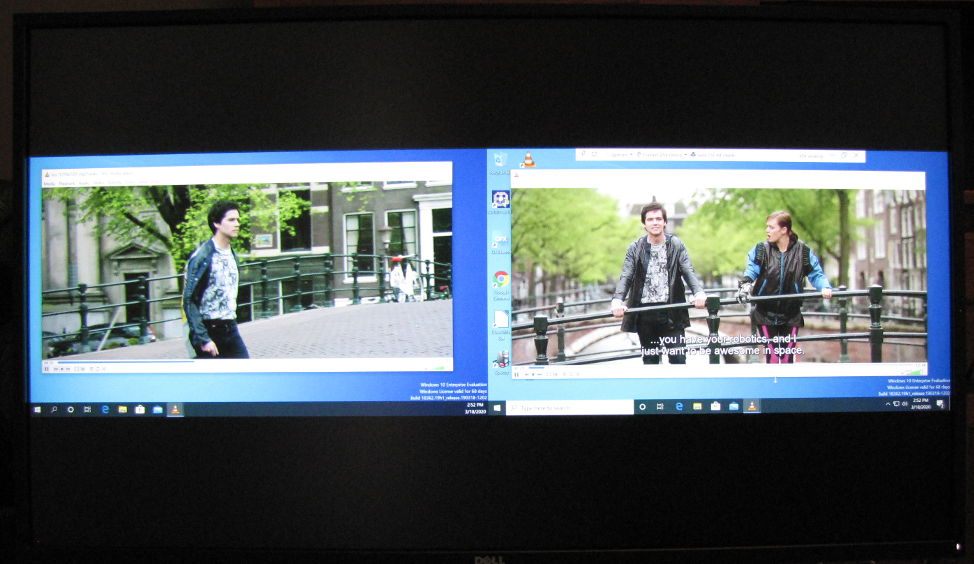 We used the Dell UltraSharp U4320Q monitors PBP feature to display 4 x FHD (1920×1080) displays and connected to it to the thin client by a third and fourth cable to the expansion card. We attached the GPU enabled desktop to it and displayed to all four of the monitors using the single GPU enabled virtual desktop. The device attached to the virtual desktops without any issues. We then played a 1080p video on all of the monitors to stress the Wyse 5707 and worked with LibreOffice documents on all of the monitors. During this testing we didn’t notice any degradation of performance or responsiveness on the monitor. 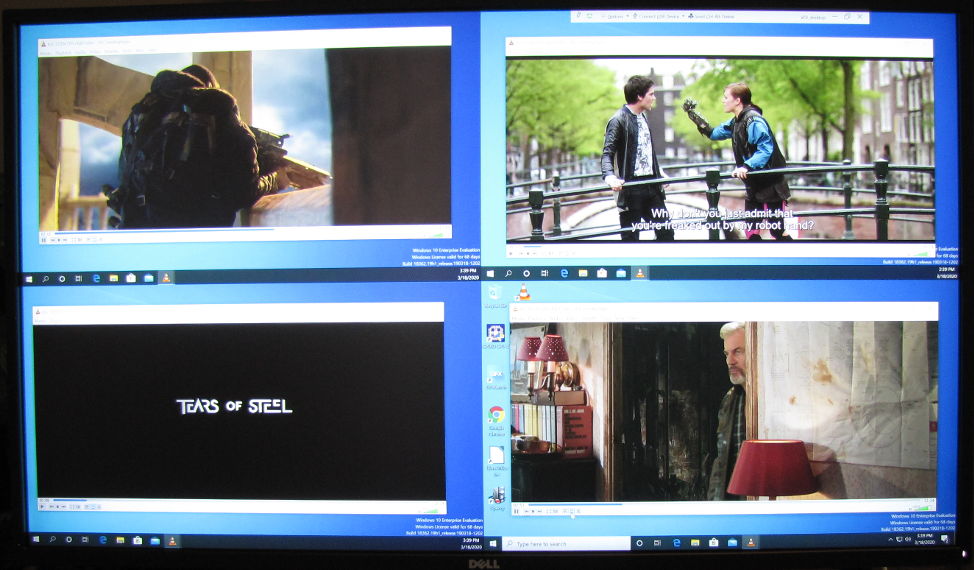 For multi-monitor usage, we connected the HP t740 thin client to a Dell 43 Ultra HD 4K multi-client monitor (P4317Q). We like using this monitor as it can simultaneously display content from up to four different inputs in FHD (1920×1080), or from a single input at a resolution of 4K (3840×2160) to do the work of four independent monitors. The monitor has two HDMI/MHL inputs, a Mini DisplayPort input, a full-size DisplayPort input, a VGA input, and a pair of 8-watt speakers.

We used the two ports on the t740 expansion card and the Dell P4317Q monitor’s picture-by-picture (PBP) feature to display 2 x FHD displays on it. We connected to a virtual desktop and displayed it to both monitors. After the device attached to the virtual desktop without any issues, we played a 640×360 30fps video on both of the screens and worked with LibreOffice documents to stress the device. We played the videos in native resolution and in full screen without any jitter, and were able to work with our documents at the same time without any issues. During our testing, Task Monitor showed a CPU usage of 5%, a GPU usage of 51%, and a max bandwidth of 4.7Mbps.

We then connected the ports marked DP1and DP2on the t740 to the Dell P4317Q monitor, and configured the picture-by-picture (PBP) feature to display 4 x FHD displays on it. Then we connected to a virtual desktop and displayed it on all four of the monitors without any issues. We then played 640×360 30fps videos on all four screens and worked with LibreOffice documents to stress the device. The videos played in native resolution and in full screen mode without any jitter, and we were able to work with our documents without any issues. 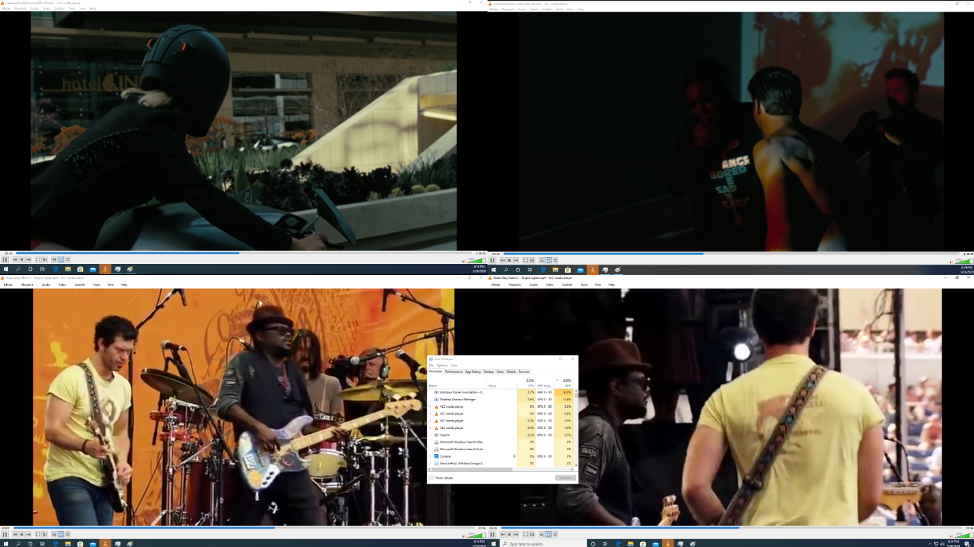 Launched earlier this year at CES, the Dell UltraSharp U4320Q is an absolute monster, literally in physical form, but also in terms of capabilities. On the desk of a standard issue business professional, the ability to use one machine to drive a giant display is a great starting point. But you can also use multiple systems to slice the monitor into four distinct quadrants, combining a good deal of compute power into a single view.

In our testing we spent a good amount of time looking at the display from a thin client perspective. In the HP t740 thin client review, we used that single thin client to drive four distinct inputs in one display. The same can be done of course with Dell’s high-end thin clients, like the Wyse 5070 thin client. In these scenarios, VDI users have tremendous opportunities without the need to have expensive and loud PCs on the desk. With the ability to take advantage of NVIDIA GPUs for VDI, there’s an excellent case to be made for pairing this display with the Wyse 5070 and the proper back-end infrastructure to deliver a high-performing workspace with all of the security the enterprise needs for remote workers.

Whatever your use case, if you can benefit either from the ability to split the display into four or prefer the giant real estate as a single panel, the Dell UltraSharp U4320Q is a phenomenal option with a ton of connectivity in a standard 16:9 widescreen form factor.