The Echostreams DSS320 is a redundant storage server platform, part of the DuraStreams family. The DSS320 is designed specifically for SMB verticals, integrating the LSI Syncro CS solution for HA storage access. The DSS320 supports two hot-swap compute nodes with different motherboard options to support either uniprocessor (UP) or dual processor (DP) configurations. Unlike traditional approaches to high-availability, there is no need to cluster multiple separate servers together as both nodes are housed in the same chassis in a single CiB solution.

The Echostreams DSS320 is a redundant storage server platform, part of the DuraStreams family. The DSS320 is designed specifically for SMB verticals, integrating the LSI Syncro CS solution for HA storage access. The DSS320 supports two hot-swap compute nodes with different motherboard options to support either uniprocessor (UP) or dual processor (DP) configurations. Unlike traditional approaches to high-availability, there is no need to cluster multiple separate servers together as both nodes are housed in the same chassis in a single CiB solution.

Using LSI Syncro CS Solution, the Echostreams DSS320 becomes a true high availability converged server and storage solution. SMB and ROBO offices using DSS320 with LSI Syncro will have an HA solution that ensures they always have access to their data. This should allow businesses to have better total cost of ownership, a high performance Direct Attached Storage (DAS), and an HA with storage controller failover and RAID data protection.

The platform is designed for distribution through OEMs and is modeled around flexible customization per use case. The DSS320 3U chassis is unique in the Syncro-enabled space, it offers 16 3.5″ bays and 4 2.5″ 7mm bays, along with four hot-swappable redundant 120mm fans for cooling. Depending on motherboard and CPU configuration, the compute cluster can support up to 1TB of RAM (512GB per node). With the addition of the four “extra” 2.5″ bays, users can insert some level of flash into the configuration for caching or as a flash volume, without sacrificing HDD capacity by giving up the 3.5″ bays.

The Echostreams’ DSS320 is a CiB solution with two compute nodes and front-access storage in a 3U chassis. The front of the system has power and ID lights/buttons on either side for each compute node, including network activity lights, as well as 16 3.5″ HDD trays and four 2.5″ 7mm SSD trays running across the middle. Compared to other 3U CiB solutions we’ve seen that have offered just 16 3.5″ bays, EchoStreams ups the ante by including four slim 7mm SSD slots to create a more dense platform with greater storage and performance potential. 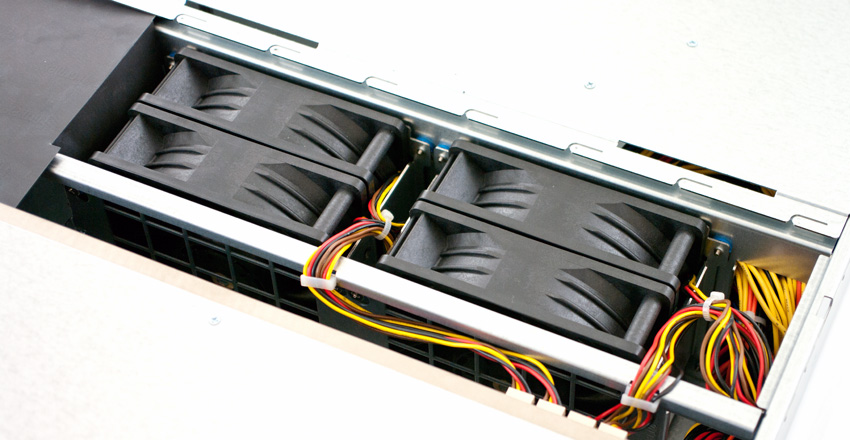 The rear of the system has access to both compute nodes with one on top of another. Redundant power supplies are located on the left side, with redundant cooling accessible from under the top cover. Along the rear of each compute node are the management ports including USB, VGA, KVM, 1GbE (iKVM) as well as twin 1GbE for network access. EchoStreams also goes a great deal further to maximize customization potential by offering 5 HHHL PCIe slots for expansion, including one internal slot dedicated to the clustered RAID card or HBA. In our configuration we have the internal slot populated with the LSI Syncro CS adapter, as well as one dual-port Mellanox ConnectX-3 40GbE card for high-speed network connectivity.

EchoStreams goes to great lengths to squeeze as much performance as possible from the DSS320, going as far as offering specialized firmware for the JBOD backplane to dedicate half the SAS channels to the SSDs and half to the HDDs. This allows the SSDs to stream data at their full bandwidth, helping in caching scenarios or those where a dedicated SSD volume is presented through shared storage.

For our testing in each DSS320 compute node we used:

Storage shared across both compute nodes:

Each of the arrays benchmarked in our SQL Server protocol is well-qualified to handle 15,000 virtual users, the DSS320 trailed behind the others coming in second to last. This isn’t bad however considering the hybrid arrays up top and the massive capacity the 6TB 7K Seagate drives offer. 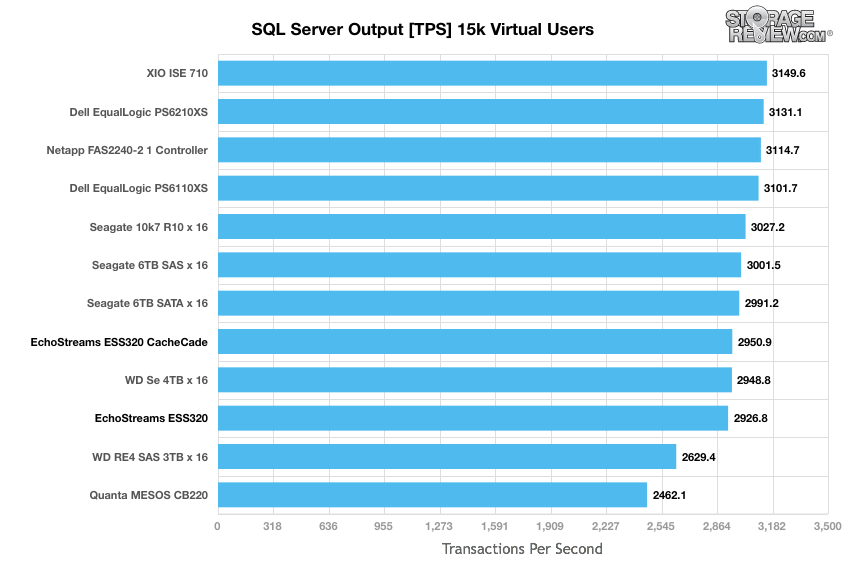 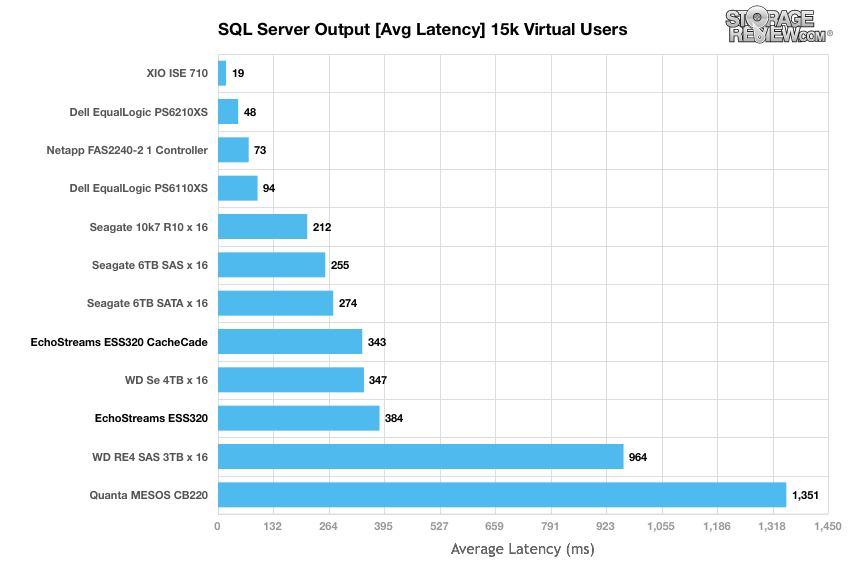 The average latency uses a large effective queue depth of 512, or 256QD. We saw somewhat similar results to the above outcome. All the DSS320 test results were much higher than the CB220 but the SMB cached again was far ahead of the others with a read latency of 4.53ms and a write latency of 61.82ms which again was only slightly better than the other write latencies.

The maximum latency results reflect the worst case scenario from the 4k throughput benchmark. Once again the DSS320 SMB cached was the top performer with max read latency at 181.81ms but it fell to second in write latency behind the DSS320 iSCSI non-cached which had a write latency of 329ms.

In contrast to the maximum latency report, standard deviation reflects how consistent the Echostreams’ DSS320 with LSI Syncro CS was able to maintain latency performance rather than the worst case scenario. We saw similar results to those above with the DSS320 SMB cached out performing the others with read latency of 0.698ms and write latency of 6.6ms.

The next synthetic enterprise benchmark measures throughput with an 8k transfer size and 70% read operations and 30% write operations. This benchmark utilizes a variety of thread and queue depth combinations from 2 threads and a queue of 2 up to 16 threads and a queue depth of 16. Similar to the 4k random throughput, the DSS320 SMB cached blew the others away taking an early lead and maintaining throughout. The DSS320 SMB cached peaked at 7,111 IOPS. 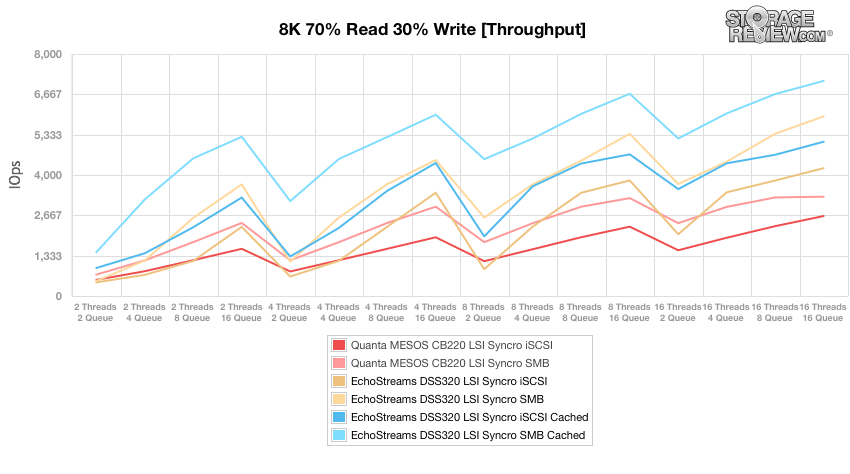 Charting the average latency in the 8k 70% read and 30% write benchmark shows similar results to the above with the DSS320 SMB cached starting off and then maintained the lead with a lower latency throughout. 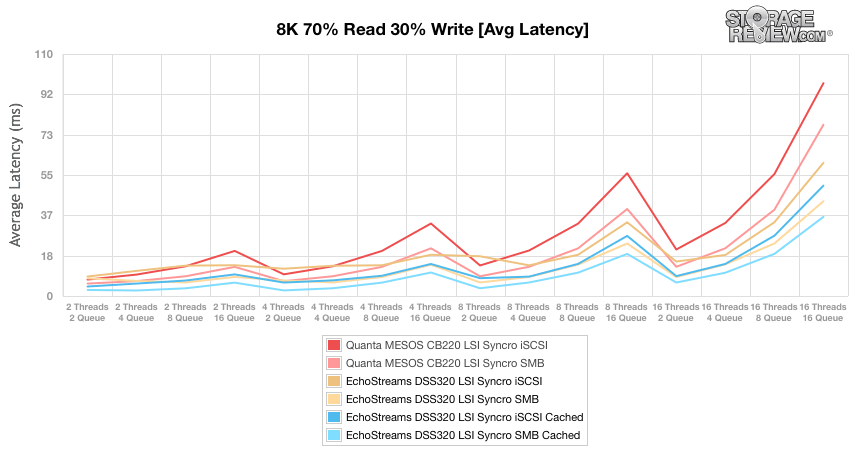 With max latency we again see a big shift in results. The DSS320 SMB cached, which had been out performing the others, had the poorest showing with higher latency for the better part of the test. The lowest latency came between the CB220 iSCSI, the DSS320 iSCSI and iSCSI cached. Overall the CB220 iSCSI had the lowest max latency taking an average of all the readings. 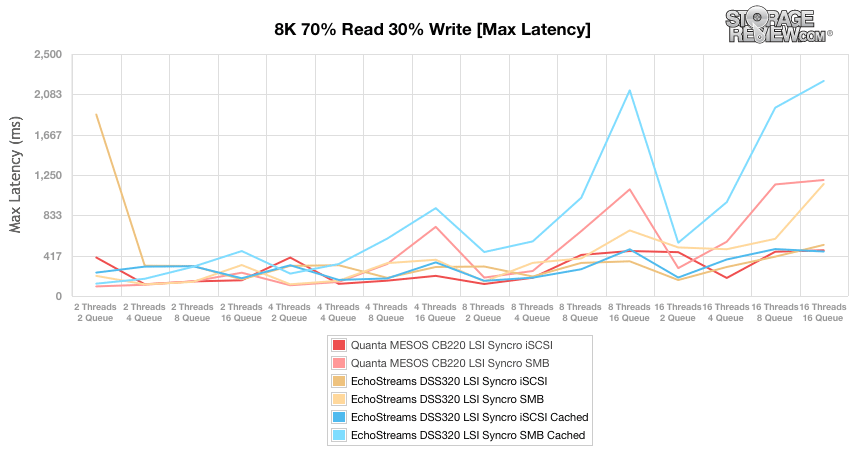 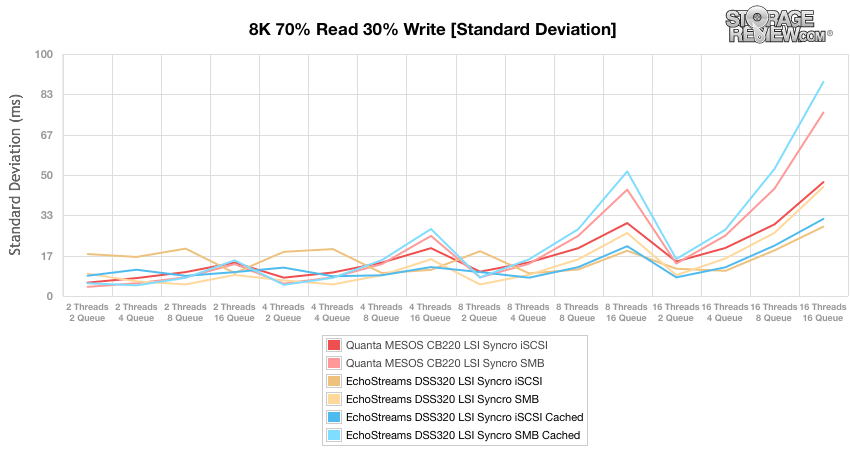 The Echostreams DuraStreams DSS320 is a highly-available storage server platform designed specifically for SMBs that want a simple and cost effective storage solution. The DSS320 offers two compute nodes configurable with up to two Intel Xeon E5-2600 Xeon V2 (Ivy Bridge) processors and can have up to 512GB of DDR3 memory. The chassis supports up to 16 3.5″ HDDs and 4 2.5″ SSDs, packing up to 96TB of raw storage with 6TB HDDs plus additional flash capacity leveraging the top four 7mm bays. The addition of LSI Syncro CS makes the DSS320 into an HA CiB, reducing downtime in businesses that require storage availability.

In our SQL Server application testing with a RAID10 configuration across 16 6TB Seagate SAS HDDs we found the DSS320 to perform fairly well sharing an iSCSI LUN to our benchmark system. Compared to a DAS environment using the same drives, the Syncro CS solution took a slight hit in latency presenting that storage over the network. With CacheCade added that gap narrowed, and would probably drop even further if the SQL Server instance was running on the cluster locally.

In terms of peak I/O in our synthetic tests we were able to pull upwards of 60k sequential IOPS write in our 8K workload over SMB, dropping to around 3,930 IOPS write with a random 4K workload also over SMB. Peak bandwidth from the DSS320 measured 1.11GB/s write over SMB and 1.57GB/s read over SMB cached. We saw a significant improvement in random read performance with our CacheCade-enabled configuration, improving 4K random read performance from 8k IOPS over SMB to over 56K IOPS. In our 8k 70/30 test was saw gains as well, with performance increasing from 65% at low thread/queue levels to 16% at high thread/queue levels. Overall the EchoStreams DuraStreams DSS320 packs a ton of storage potential into a comparatively compact 3U chassis.

The Echostreams DuraStreams DSS320 brings new levels of flexibility to the LSI Syncro HA storage solution, cramming 16 3.5″ bays and 4 2.5″ bays into a 3U footprint. The net result is an HA solution that’s easy to put to work with the option of adding a little bit of flash to accelerate the CiB’s performance.