The Samsung SM843T is an enterprise-grade SSD that is designed to offer a consistent level of performance (99.9% reliable latency and QoS) over its lifespan, and is ideal for core enterprise use cases including Big Data systems, VDI and other high-performance enterprise platforms. The SM843T is a companion to the Samsung SM843 drive, which was originally reviewed approximately a year ago. Though both Samsung SSDs use the same MDX S4LN021X01-8030 Controller, the new SM843T is architected specifically for mixed data center use cases, while the SM843 is designed to be used in environments that require read-intensive behavior like server boot drives, higher-end enterprise client workstations and certain embedded applications. The other main difference between the two is that the SM843T uses enterprise NAND (eMLC), which focuses on prolonging the reliability of the drive, while the SM843 uses client MLC NAND.

The Samsung SM843T is an enterprise-grade SSD that is designed to offer a consistent level of performance (99.9% reliable latency and QoS) over its lifespan, and is ideal for core enterprise use cases including Big Data systems, VDI and other high-performance enterprise platforms. The SM843T is a companion to the Samsung SM843 drive, which was originally reviewed approximately a year ago. Though both Samsung SSDs use the same MDX S4LN021X01-8030 Controller, the new SM843T is architected specifically for mixed data center use cases, while the SM843 is designed to be used in environments that require read-intensive behavior like server boot drives, higher-end enterprise client workstations and certain embedded applications. The other main difference between the two is that the SM843T uses enterprise NAND (eMLC), which focuses on prolonging the reliability of the drive, while the SM843 uses client MLC NAND. 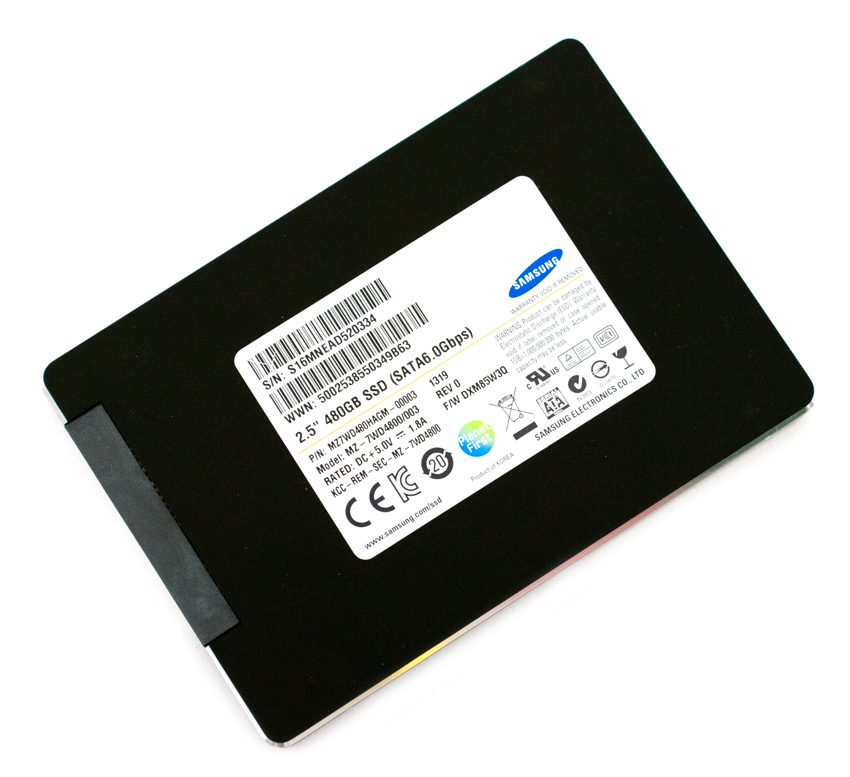 In what seems to be a growing trend among enterprise SSDs, all SM843T capacities are built with tantalum capacitors, which protect user data located in the write cache during unexpected power failures. This enterprise-grade power-loss protection provides an added level of security, ensuring that important write information is protected against data corruption that may be caused by power-loss.

Samsung continued to use its sleek and minimalistic design with the SM843T, using a charcoal color 2.5-inch, 7mm enclosure in a solid metal construction for a rugged composition. The Samsung logo and “Solid State Drive” text in white font are located on the front side of the device. 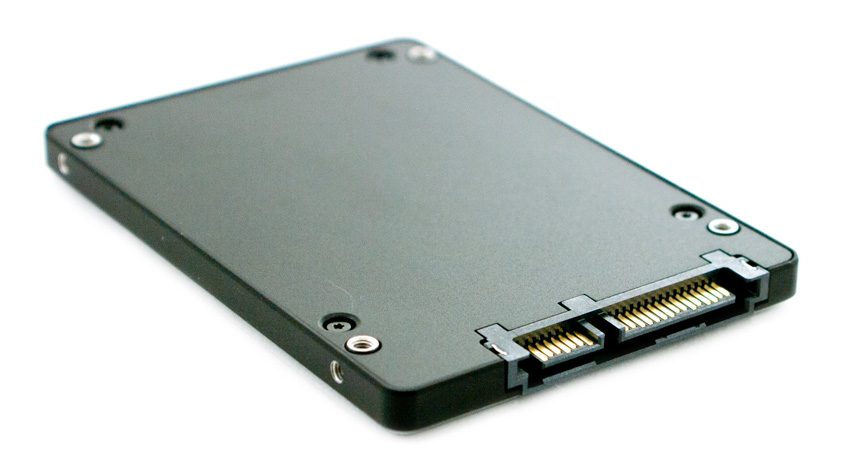 The SM843T’s form factor allows the SSD to support a variety of applications and use cases, from ultra-high density enterprise applications to demanding enterprise client applications such as notebooks and desktops. The back-side of the SM843T gives users a plethora of information, including the product information label (which displays relevant information such as the capacity and model number).

The SM843T can be easily mounted via its four screw holes located on the side profiles. 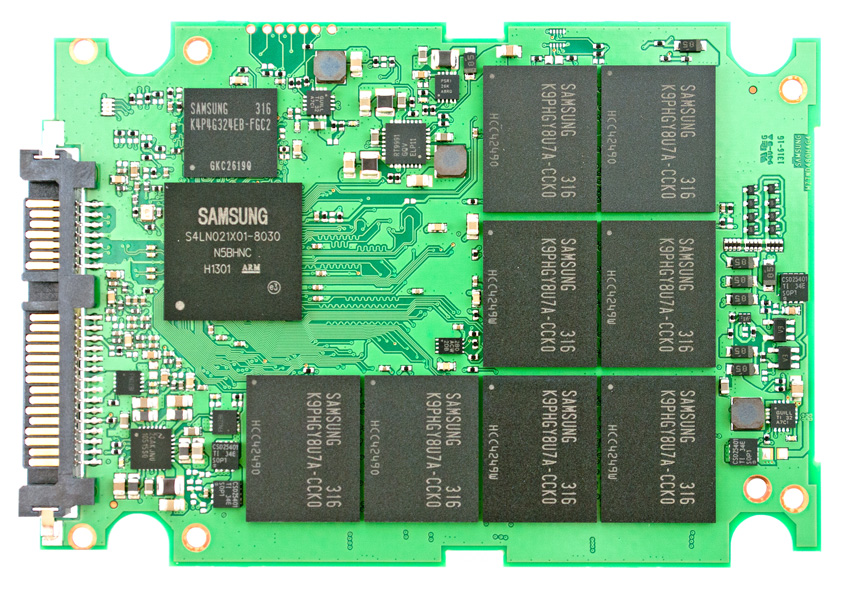 The SM843T’s storage derives from Samsung’s 20nm-class eMLC NAND Flash. Also visible is the SSD’s tantalum capacitors, which protects all data in the write cache in the case of an unexpected power failure. 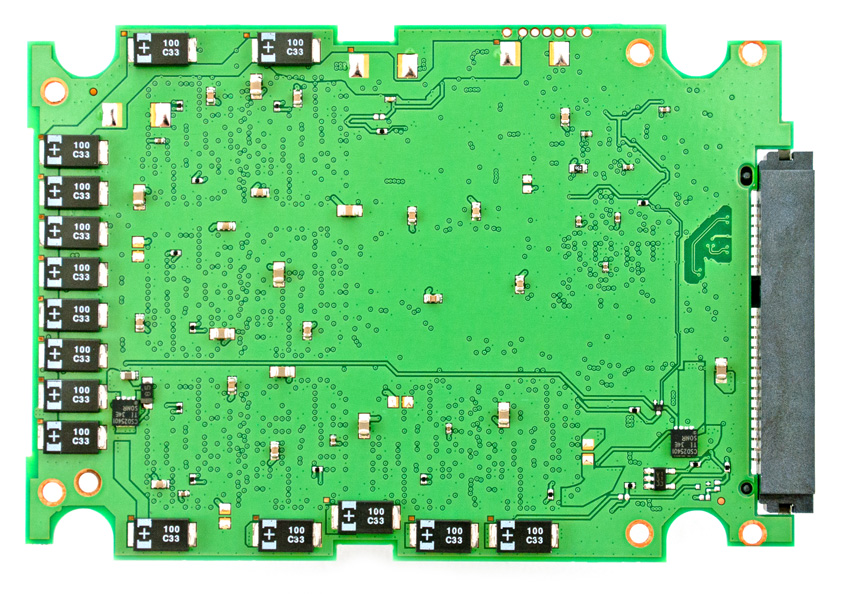 In order to understand the performance characteristics of enterprise storage devices, it is essential to model the infrastructure and the application workloads found in live production environments. Our first three benchmarks of the Samsung SM843T are therefore the MarkLogic NoSQL Database Storage Benchmark, MySQL OLTP performance via SysBench and Microsoft SQL Server OLTP performance with a simulated TCP-C workload.

In our overall average latency benchmark, the Samsung SM843T fared well against its competition, coming in towards the middle of the pack with an average latency of 3.83ms, just behind the other Samsung drive. 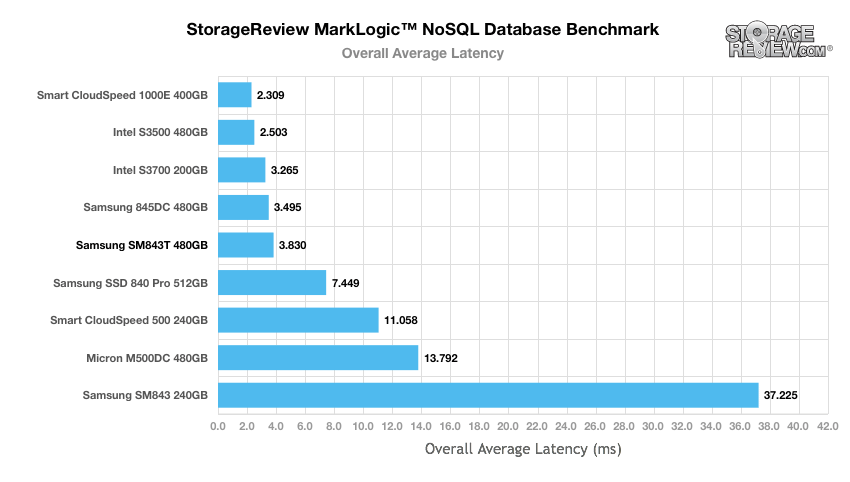 The latency results for the majority of the operations during the NoSQL benchmark show that the SM843T did experience a latency spike (although this is normal for SSDs). 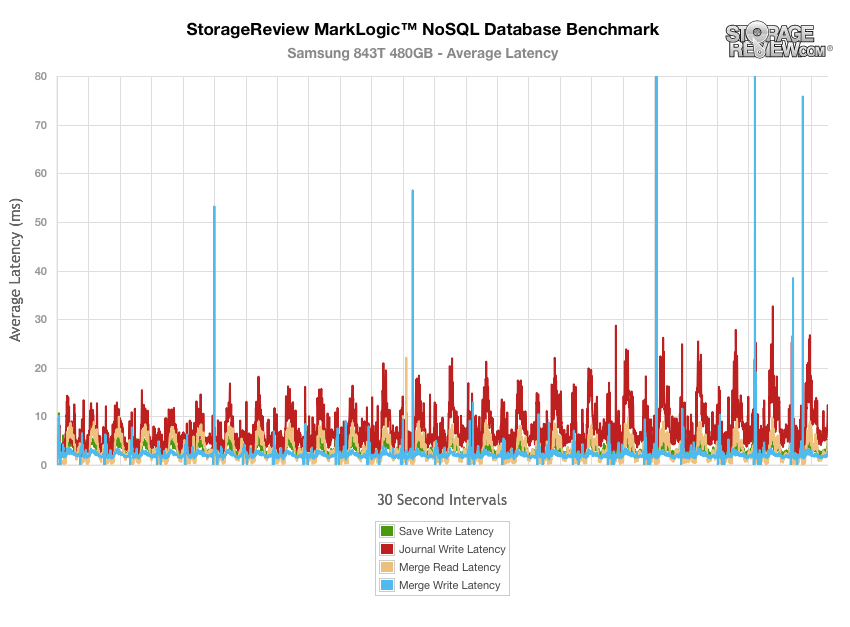 Our next application test consists of Percona MySQL database test via SysBench, which measures the performance of OLTP activity. In this testing configuration, we use a group of Lenovo ThinkServer RD630s and load a database environment onto a single SATA, SAS or PCIe drive. This test measures average TPS (Transactions Per Second), average latency, as well as average 99th percentile latency over a range of 2 to 32 threads.

The Samsung SM843T’s average TPS ranked near the middle of the pack and the Intel S3700 showed the best performance by a large margin. 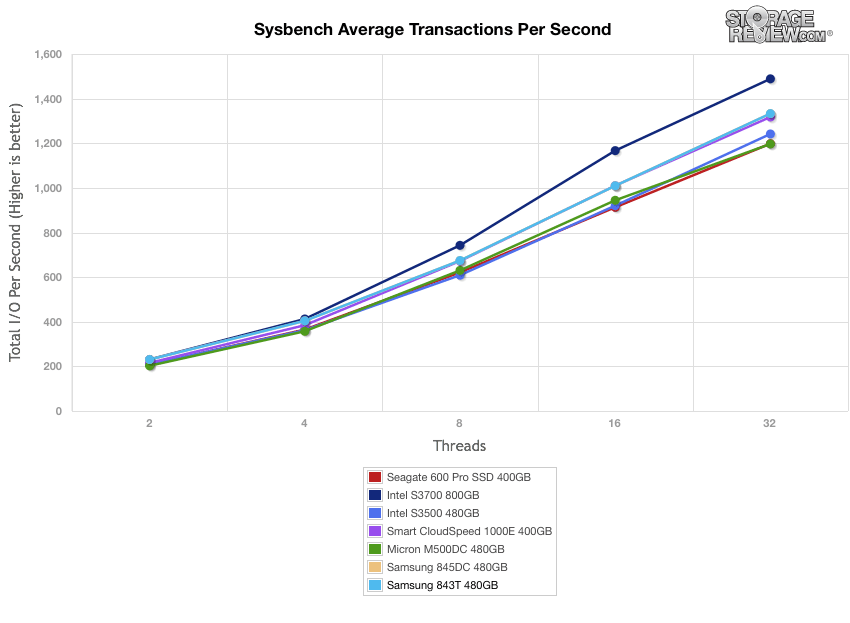 The rankings in the average latency benchmark were nearly identical with the Samsung SM843T continuing to perform near the middle ranking with the Intel S3700 leading the pack. 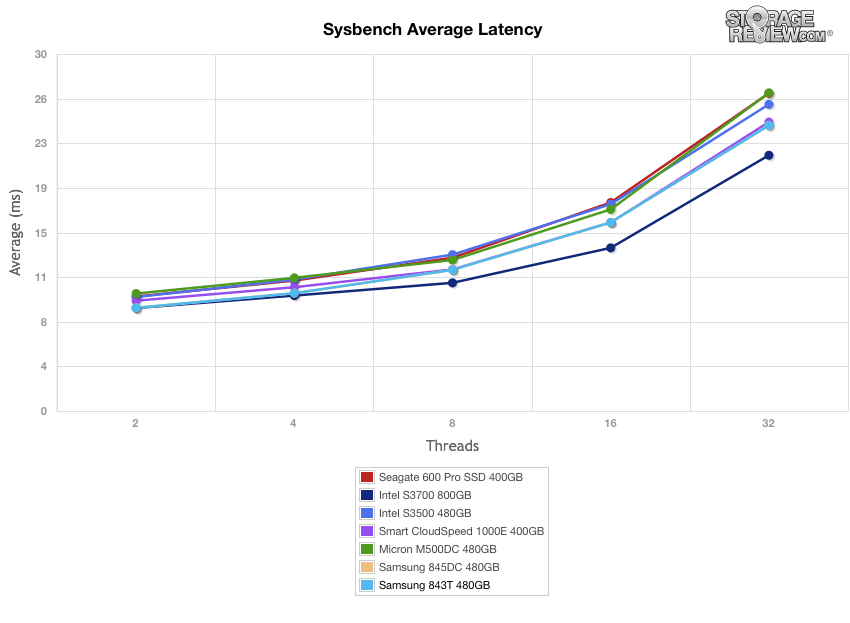 At the lowest overall 99th percentile latency, the Samsung SM843T again took third place with an average latency of 54.24ms by 32T. The Intel S3700 continued its dominance. 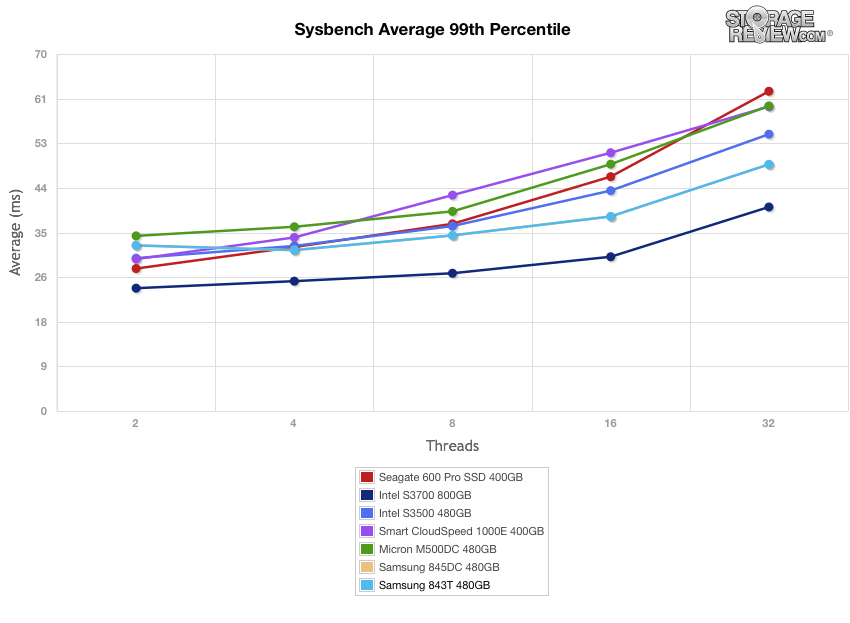 In our SQL Server test, the Samsung SM843T came in 2nd place, though there was virtually no difference in results between comparables except for the poor performance of the Micron M500DC. 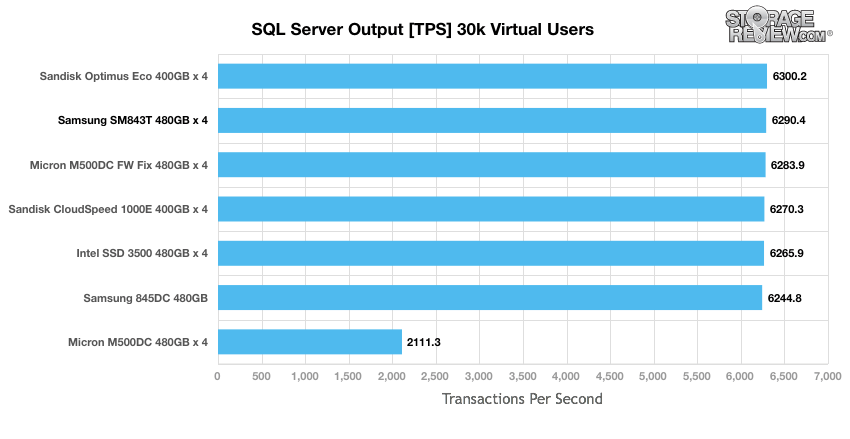 Looking at the overall average latency, the Samsung SM843T ranked a very impressive second place, with the Micron M500DC once again trailing well behind by a large margin. 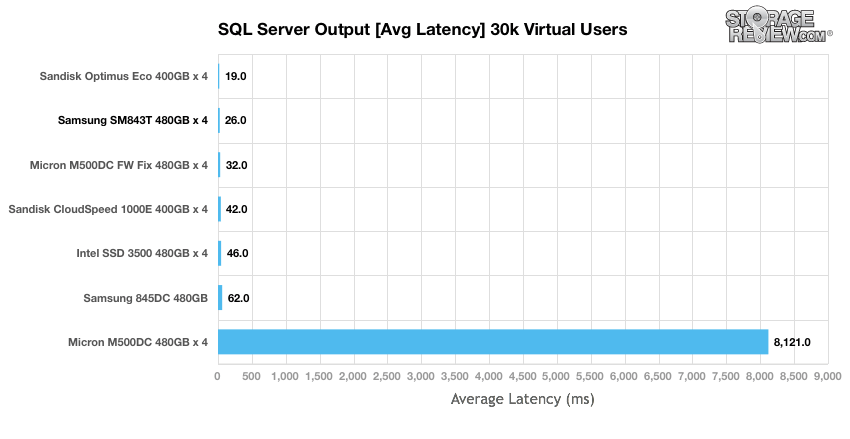 Flash performance varies as the drive becomes conditioned to its workload, meaning that flash storage must be preconditioned before each of the fio synthetic benchmarks in order to ensure that the benchmarks are accurate. Each of the comparable drives are secure erased using the vendor's tools and preconditioned into steady-state with a heavy load of 16 threads and an outstanding queue of 16 per thread.

Once preconditioning is complete, each device is then tested in intervals across multiple thread/queue depth profiles to show performance under light and heavy usage. Our synthetic workload analysis for the Samsung 840 Pro uses two profiles which are widely used in manufacturer specifications and benchmarks.

During preconditioning for the 4k synthetic benchmark, the Samsung SM843T performed relatively well at burst stage of our charts; however, after leveling off it ended up being one of the slower drives. The Micron M500DC boasted the best performance through its steady-state. 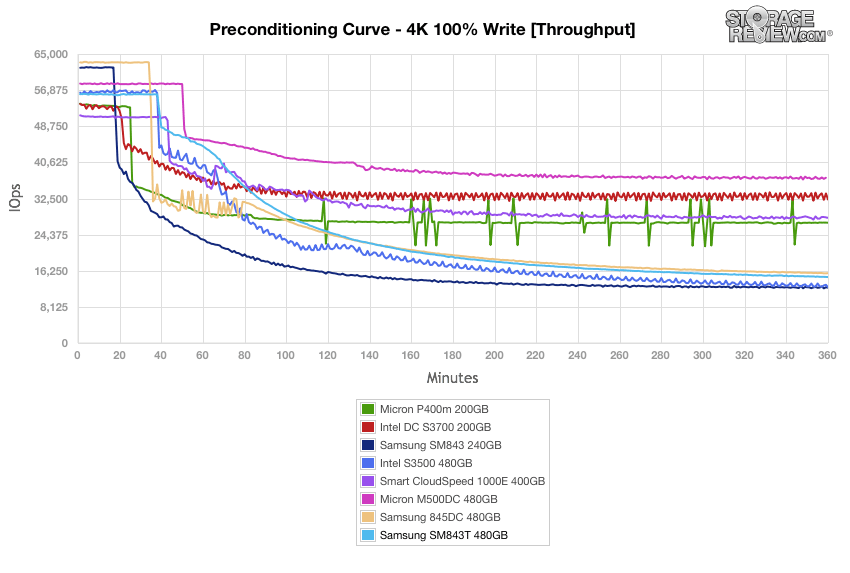 The Samsung SM843T showed good results during the burst stage of our average latency tests, though it showed an increase in latency starting near the 40-minute mark and ended up being one of the slower drives. The Intel DC S3700 and Micron M500DC were the second fastest and fastest drives, respectively. 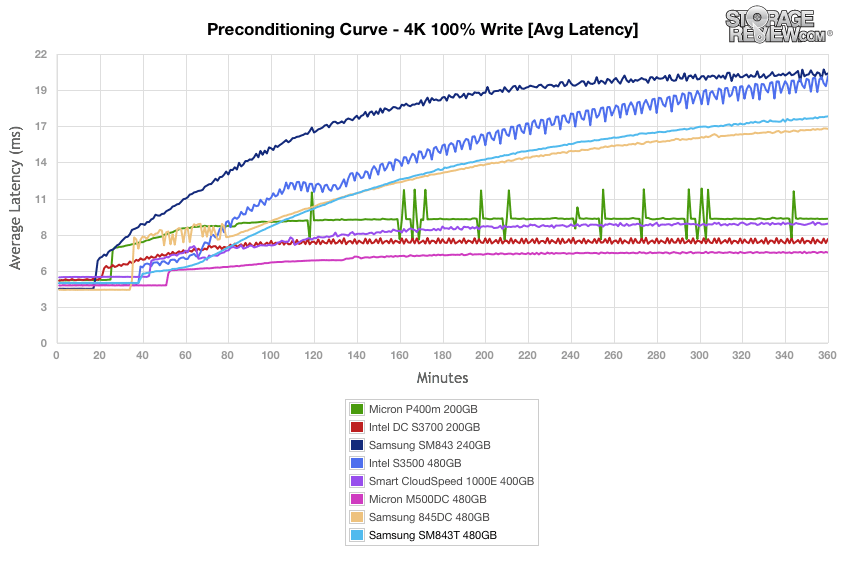 In our maximum latency benchmark, the Samsung SM843T showed a very consistent rate with no noticeable spikes. 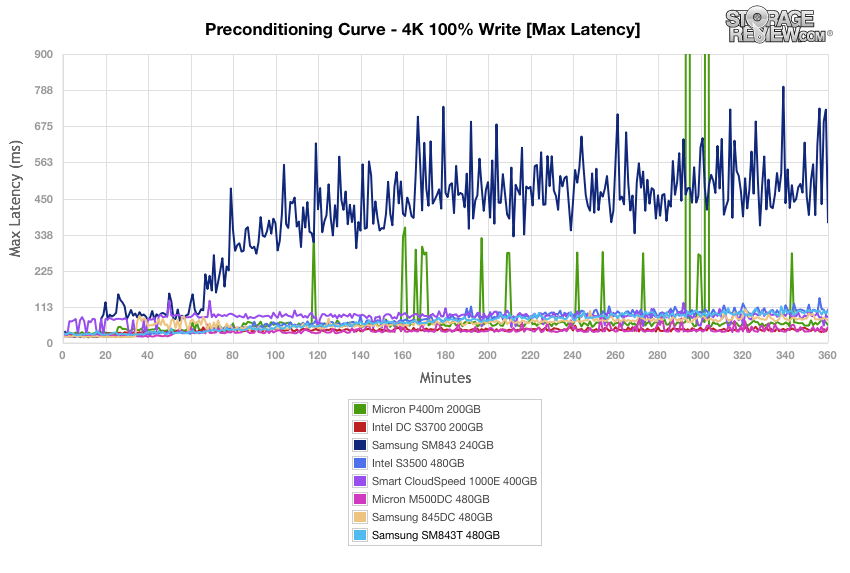 The Samsung SM843T continued its good performance in our standard deviation benchmarks, with only a gradual gain in latency and showing no spikes whatsoever. The Intel DC S3700 and CloudSpeed drives were the most consistent. 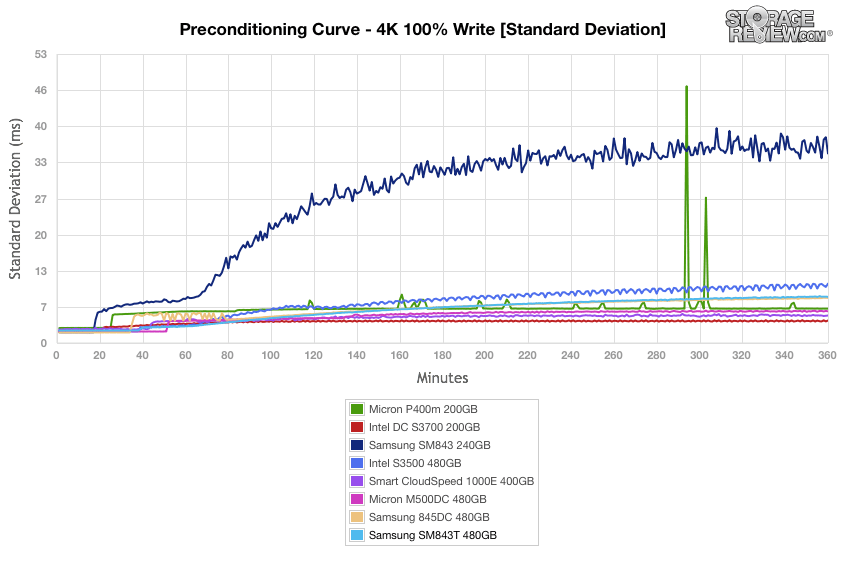 When looking at 4K throughput, the Samsung SM843T showed the lowest scores in read activity and the third lowest in the write column with 58,533IOPS and 14,560IOPS, respectively. Its brethren, the Samsung 845DC, boasted the top read performance.

The Samsung SM843T also was ranked at the bottom of the pack in average read and write latency with 4.371ms and 17.58ms, respectively.

Samsung’s SM843T continued to sit at the bottom of the pack in the max latency tests, though the SM843 posted the slowest write latency speed by a significant margin.

Though the SM843T continued its last place performance (2.13ms read and 8.64ms write), the difference between first and last place is subtle.

Our next workload uses 8k transfers with a ratio of 70% read operations and 30% write operations. The SM843T started out in the middle of the pack for its burst-rate, and ended up coming in third place by the end, just above the Smart CloudSpeed. 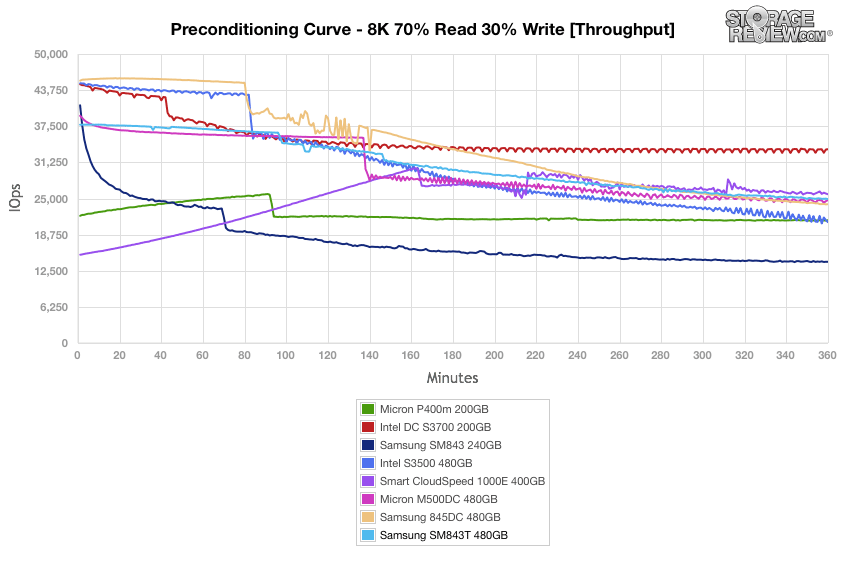 The Samsung SM843T consistently stayed near the upper part of the pack during the average latency testing. The Intel DC S3700 was the fastest in this benchmark. 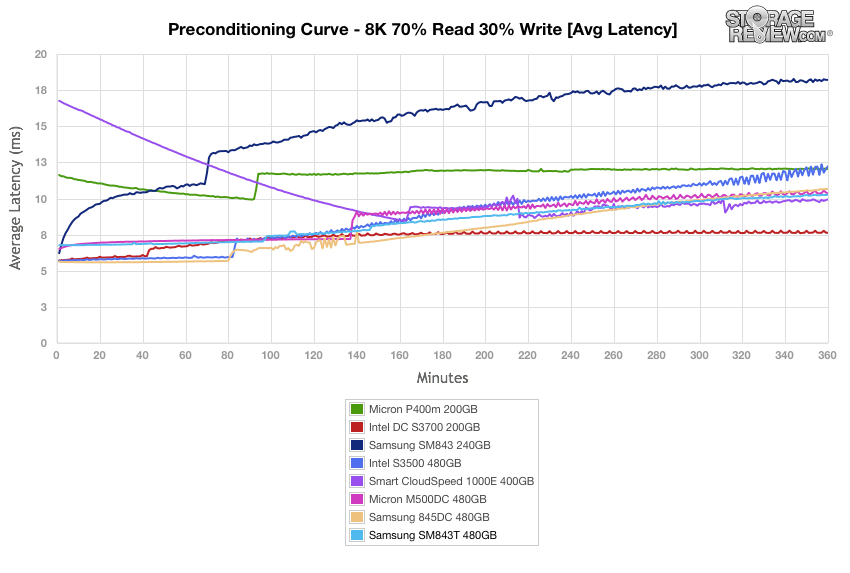 The Samsung SM843T continued to show its great latency performance during the maximum latency test showing no major spikes and taking the third spot overall. 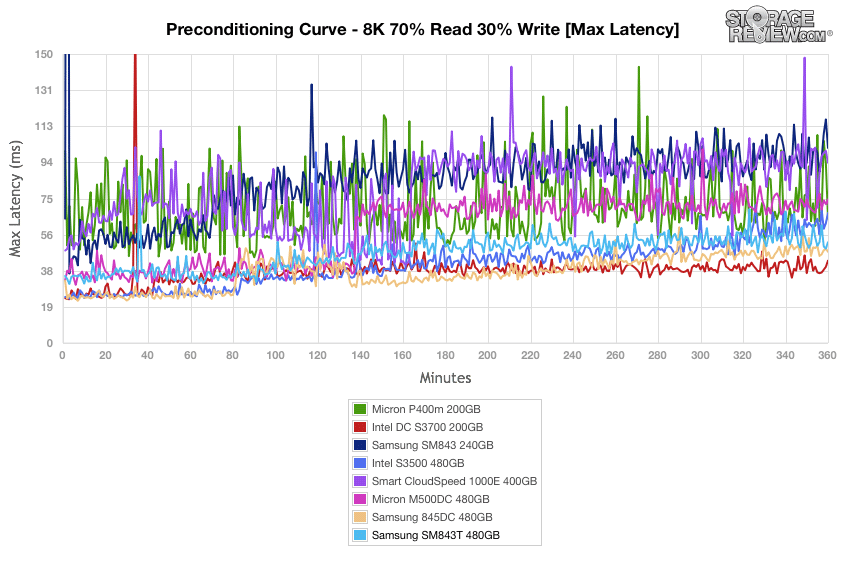 During the standard deviation tests, the SM843T continued to perform well with no noticeable spikes, falling just behind the consistency of the Intel DC S3700. The Crucial M500, Micron P400m, and Smart CloudSpeed all showed huge spikes during the test. 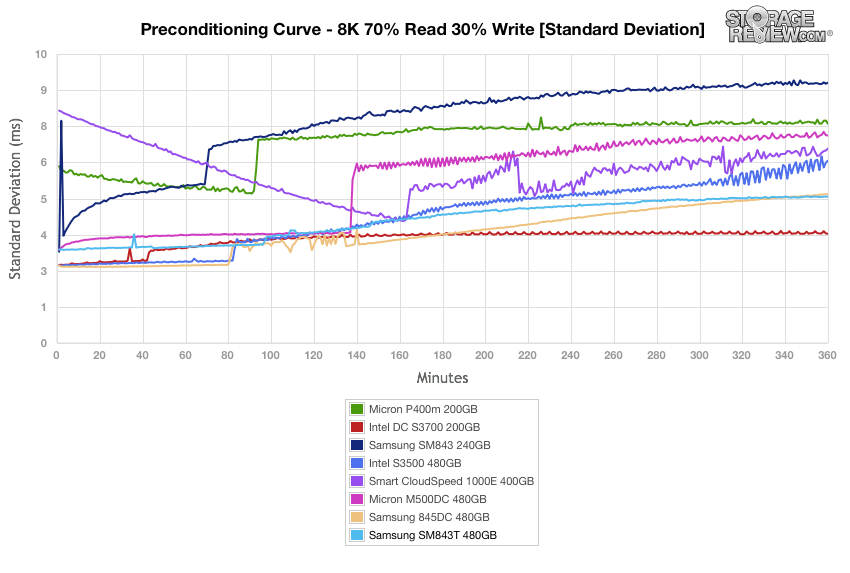 Once the drives are preconditioned, the 8k 70/30 throughput benchmark varies workload intensity from 2 threads and 2 queue up to 16 threads and 16 queue. The Samsung SM843T performed fairly well during this benchmark, coming in third place by the 16T/16Q with 24,606IOPS, just behind the Smart CloudSpeed. The Intel DC S3700 was the highest performer by a significant margin boasting an impressive 33,337IOPS. 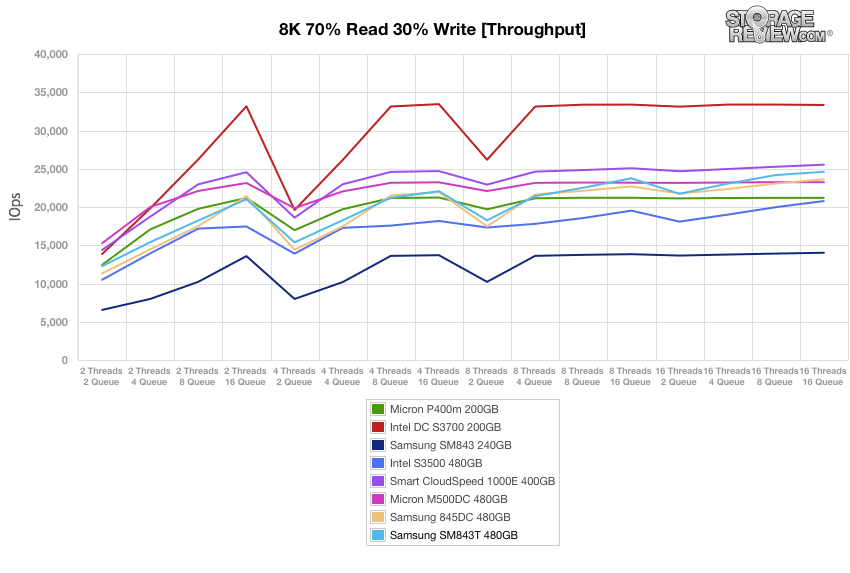 The Samsung SM843T was an upper middle performer in average latency measurement, while the Intel DC S3700 was the fastest. 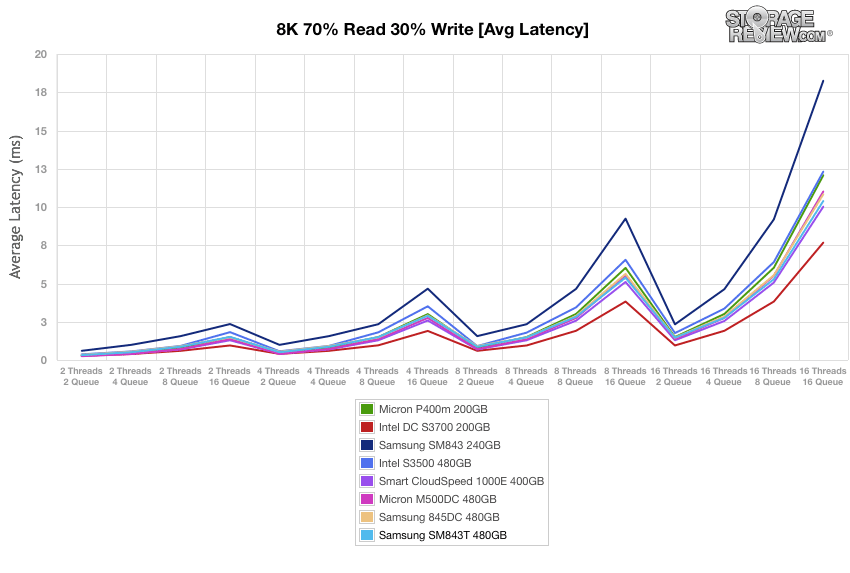 Results were very similar in the maximum latency test; the Samsung SM843T ranked third place again and the Intel DC S3700 was the fastest. 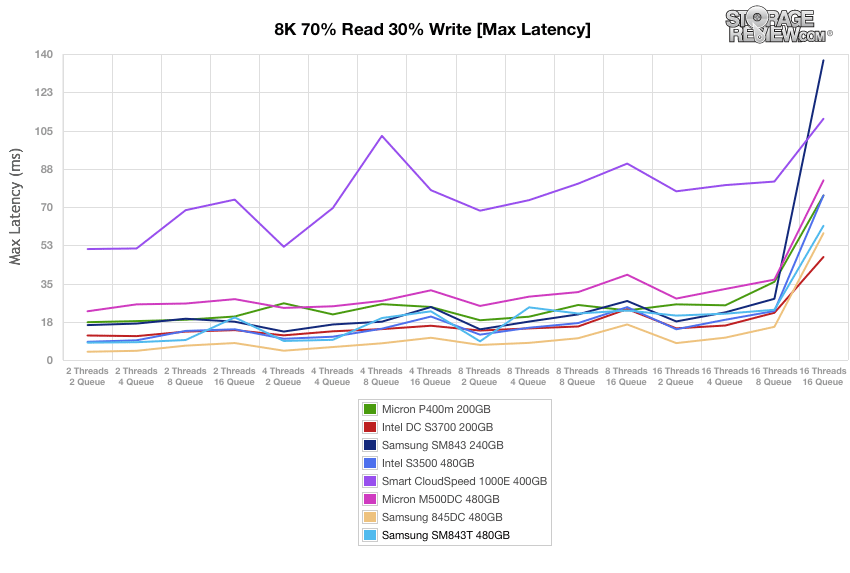 Looking at our standard deviation benchmark, the Samsung SM843T once again performed well, virtually mirroring the performance of the Samsung 845DC. 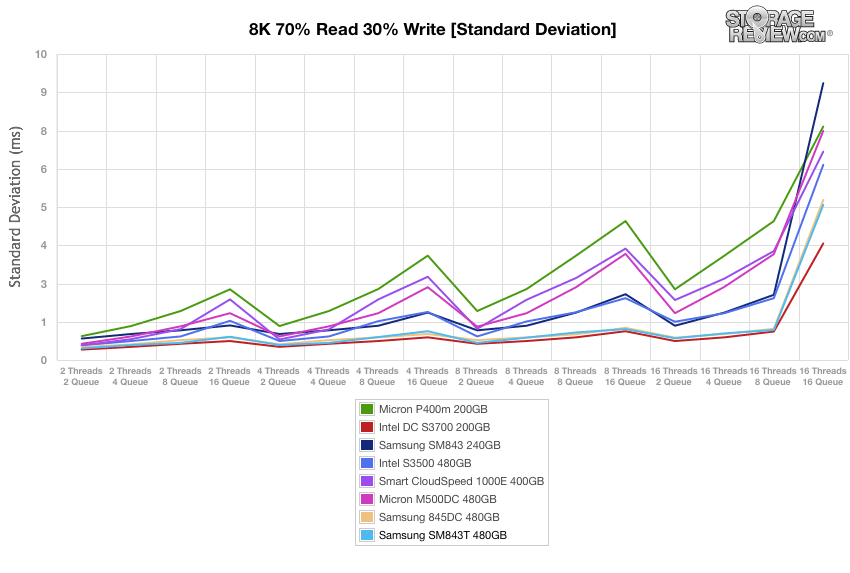 The Samsung SM843T SSD is designed specifically for Data Centers working with Big Data, VDI and other high-performance enterprise platforms. Samsung claims that the SM843T, which is equipped with enterprise 20nm-class MLC NAND flash, offers a consistent level of performance (99.9% reliable latency and QoS) over the course of its lifespan. After putting it through our gauntlet of tests, this claim by Samsung definitely holds true and is a significant improvement over its predecessor, the PM830.

When looking into its performance in further detail, the Samsung SM843T posted great results in most of our application and synthetic benchmarks. During our synthetic tests, the Samsung SM843T was a middle-to-top performer in our Percona MySQL database tests (which measures the performance of OLTP activity). Our SQL Server test showed that the SM843T had no trouble keeping up with the high-performance SSDs, while the results of the Sysbench MySQL test told a similar story.

In our 4k 100% read and 100% write benchmarks, the SM843T posted numbers that ranked at the bottom of the pack; however, the performance discrepancy between the top drive and the Samsung drive was very small in relative terms. In our 8k 70/30 workload and preconditioning tests, the Samsung drive showed some pretty impressive results, boasting numbers near the top of the leaderboard in each of our tests. We were particularly impressed with its consistency during our latency readings, as we barely saw any spikes when other top-performing enterprise SSDs showed numerous ones.

Coupled with its built-in tantalum capacitors to protect user data from file corruption caused by sudden power-loss as well as its focus on sustained random read and write workloads, the Samsung SM843T line of SSDs are a perfect fit for enterprises with mixed workload profiles.

The Samsung SM843T SSD does exactly what it is designed to do by offering great consistency, sustained performance, and latency as well as reliable data protection with its built-in tantalum capacitors.