EcoFlow sent their 160W Solar Panel to the field lab as a companion to the RIVER 2 we recently reviewed. The 160-watt solar panel is a 4×40-watt portable folding solar charger for portable PowerBanks. It comes in a nice cloth carrying case that doubles as a stand, and weighs in at 15.4 lbs. With 160W of maximum output, we decided to try out taking the remote observatory off-grid to see what we could accomplish.

EcoFlow sent their 160W Solar Panel to the field lab as a companion to the RIVER 2 we recently reviewed. The 160-watt solar panel is a 4×40-watt portable folding solar charger for portable PowerBanks. It comes in a nice cloth carrying case that doubles as a stand, and weighs in at 15.4 lbs. With 160W of maximum output, we decided to try out taking the remote observatory off-grid to see what we could accomplish.

The 160W solar panel arrived with an outer cardboard box for shipping and a nice EcoFlow solar box inside of it. Overall the product is prepared very well, and the package was painless to open and set up. Inside you get the 4-panel 160W solar, and 4 clips for attaching it to the stand. 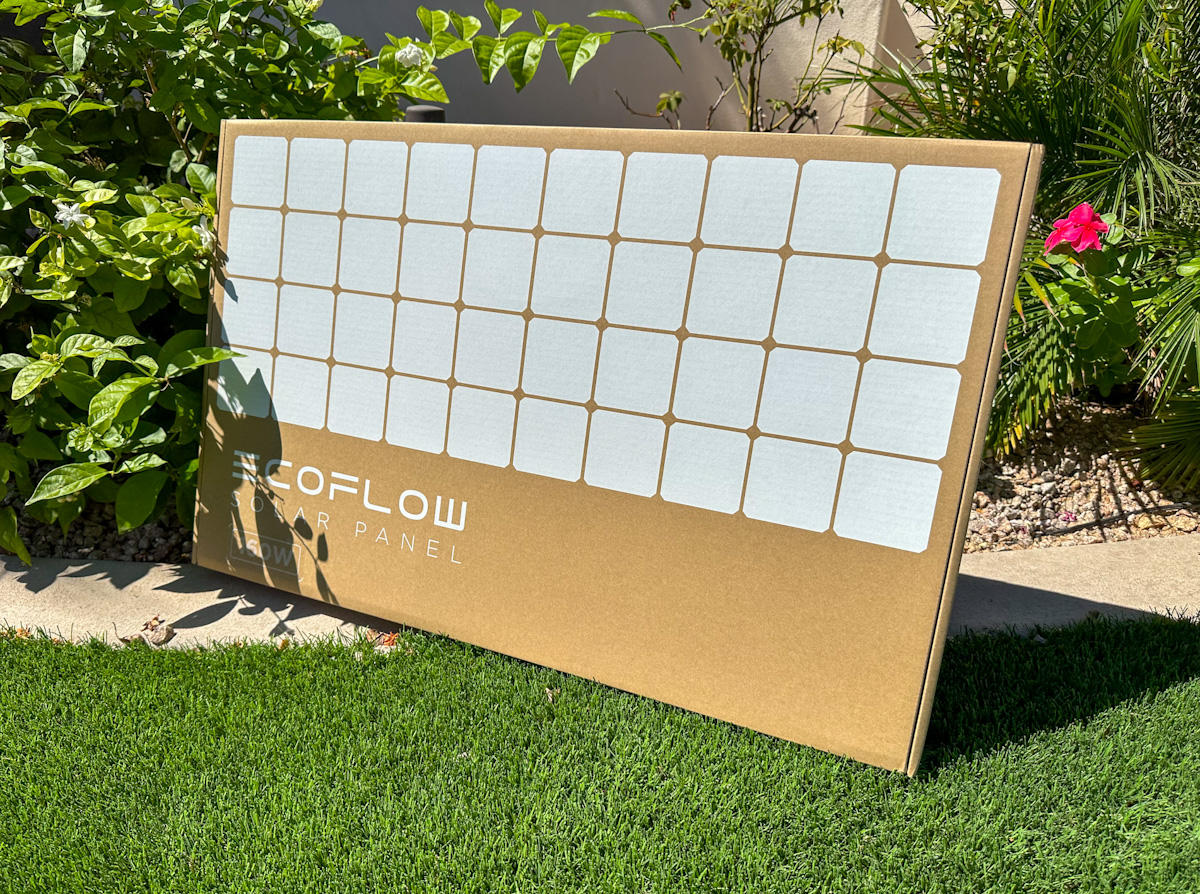 There is a piece of foam that was also in the middle of the folded solar panels, which we recommend keeping on hand for transport and storage. Of note, there are no MC4 solar connector adapters included. At the premium price point, this seems like something that could be included. With current coupons, the panel goes for $260 on Amazon.

Unlike some other offerings from EcoFlow, the 160W panel is only single-sided, but it still does pack a punch. In our extended testing, we saw inputs on our River 2 Max as high as 150W at peak times in the middle of a late summer day, with the panel more than capable of delivering around 100W at less-than-ideal sun angles and later in the day.

With our River 2 MAX attached, and a Starlink terminal, we were able to run completely off-grid for more than 2 days thanks to the solar panel providing more than enough power to top off the power station, and run the Starlink terminal all day. 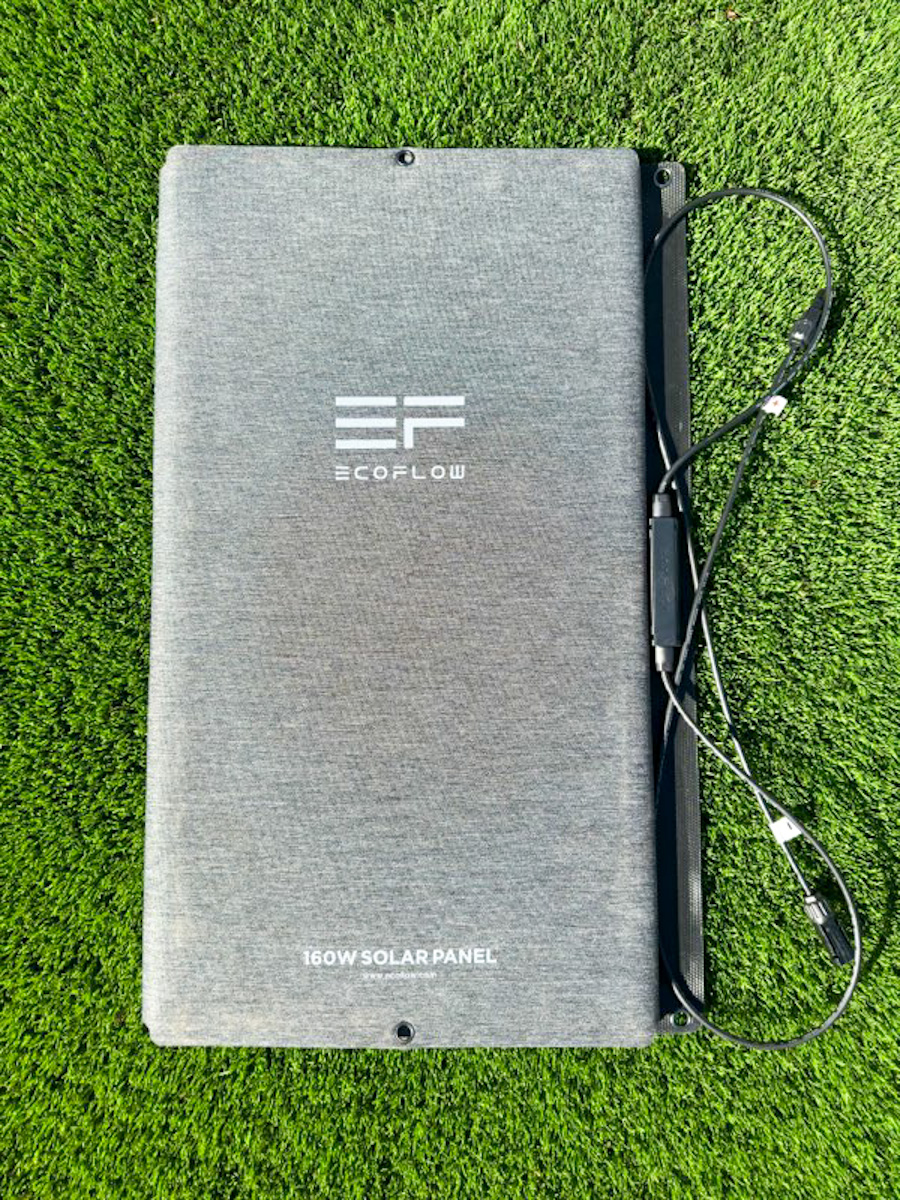 One thing to note with the EcoFlow River lineup is that some units are only able to accept up to 100W of DC input, so you will want to check your model and see what it is rated for. If the power station is only capable of 100W of DC input, you can still use the 160W model of Solar just fine, and even split the charging between a couple of power stations. All of the EcoFlow Delta Line is capable of taking in all of the power this can deliver.

While rather large when folded up, it is narrow enough to slip in between other items packed up. We found we got the best results by just laying the panel on a flat surface, as using the case as a stand is less than ideal in anything but the calmest of wind, and harder surfaces. Finding a nice flat surface, like on top of your car, and running a longer cable to the power station proved to be the best way for continuous use. Thanks to the MC4 Solar connectors, you can also combine multiple panels to get more charging current for larger Power Stations, something we hope to test out in the near future. 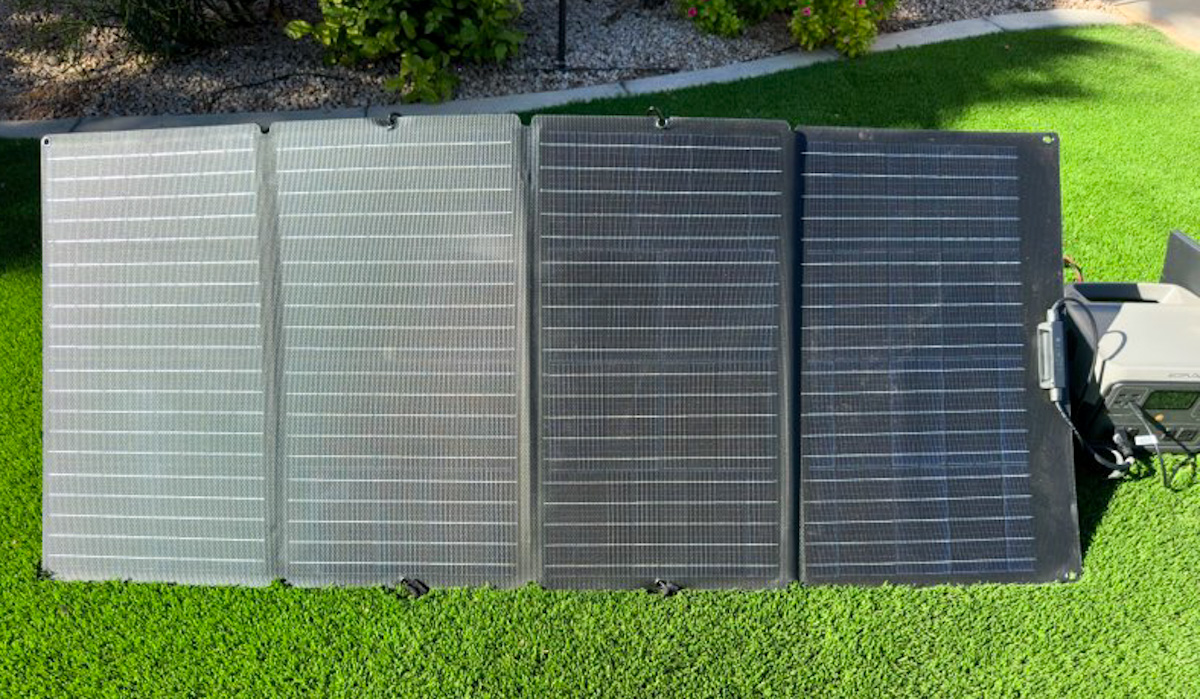 The panel is very easy to pack up and toss back in the case when used like this and only takes about 1 minute to do so thanks to the well-built carrying case. On more than one occasion during testing weather, or other factors meant we had to pack up rapidly, thanks to it being so easy, and the IP68 rating of the panel, it was never a concern as much as the rest of the random IT equipment it was powering.

As someone who has a job with flexibility in connected-but-remote-location, the EcoFlow 160w solar panel is icing on the cake for remote deployment. Paired with a decent power station, and a 5G or Starlink terminal, it is the ideal package to be able to get away from the city during the week and still be able to work.

I long for a better stand solution to be able to capture more power when the sun is at a lower angle, but the included case that doubles as a stand does get the job done. I also would exercise caution when using it with animals and children around, as the resident remote lab dog found it to be quite a warm cozy place to plop down and take a nap on when out in the field.

Overall though, given the $260 price tag, the question is does it work well? Given the efficiency we saw coming in, the answer to that question is a resounding yes.