From a hardware perspective, HPE SimpliVity has gone exclusive to HPE servers for new models. While they’re still supporting legacy servers, with HPE involved, clearly the intent is to further integrate with the ProLiant and Apollo lines if for nothing else than to simplify the validation and support processes. Fundamentally though, not a lot has changed in terms of hardware. The mainline HPE SimpliVity 380 is a 2U system based on the DL380 Gen 10 server. This system uses the HPE OnmiCube accelerator card to offload the data reduction processes from CPU to their custom ASIC. 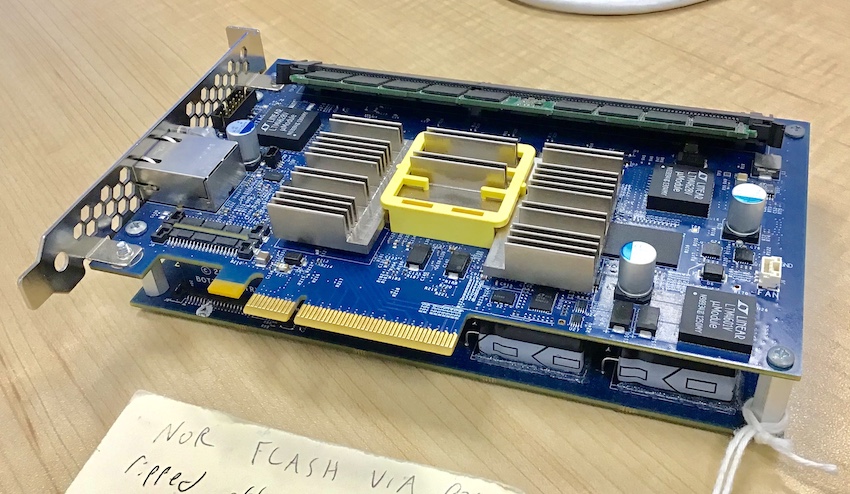 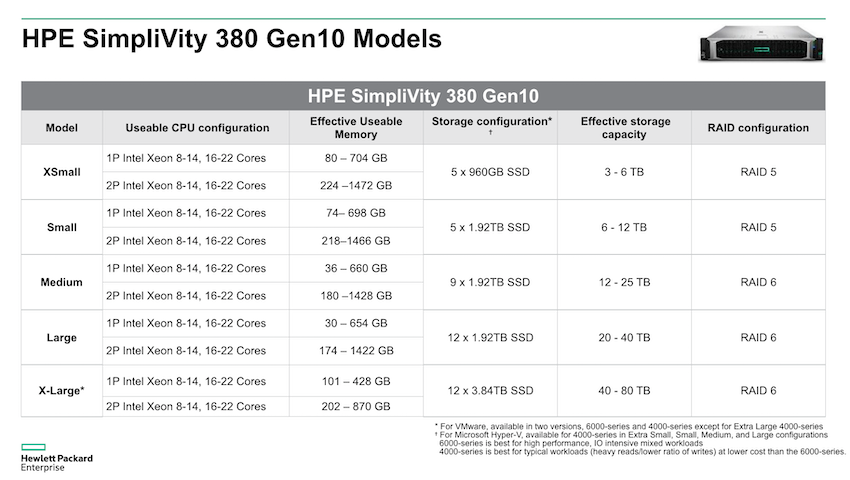 There’s also a more dense HPE SimpliVity system based on Apollo servers. The 2600 offers up to four nodes in a single 2U system, but does so without the ASIC. This solution is designed more for use cases like ROBO, small office, retail and VDI where applications tend to be less latency sensitive and infrastructure can benefit from the smaller chassis footprint. 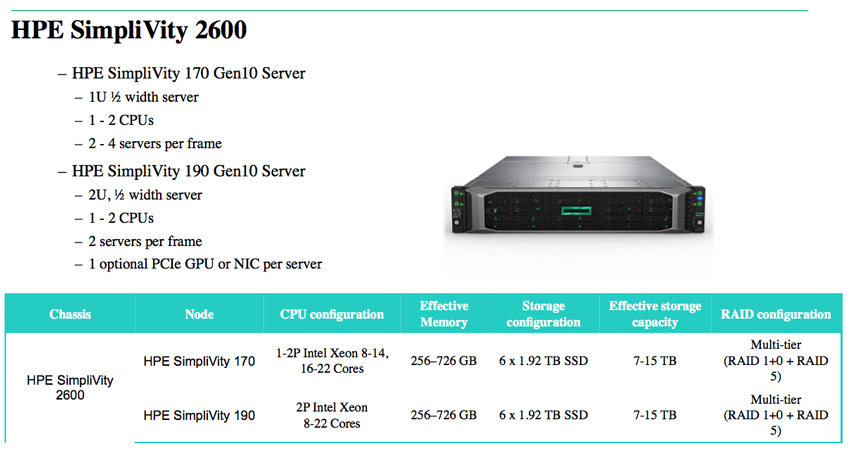 While the hardware is important and the ASIC is a neat piece of engineering, the biggest value brought to the table is around flexibility, ease of operations, and availability features. In terms of flexibility, that means support for both Hyper-V and VMware, along with their respective clouds. While most of the business today is on VMware, Hyper-V is popular in certain segments like education. In either event, deployment and management of VMs is simple and contained largely within the hypervisor itself, meaning HPE SimpliVity is deeply ingrained and doesn’t have a lot of dedicated management or processes that interfere with typical user behaviors. HPE SimpliVity also supports a variety of third parties as well, like Veeam, who can provide additional points of integration for cloud-forward organizations.

While working with HPE SimpliVity in a variety of demo environments, it’s easy to understand the ease of use. The management interface is very well thought out and simple to follow. HPE SimpliVity offers extensive integration with VMware allowing users to manage storage and functionality through the same vSphere Web Client they would be inside of already to manage other infrastructure operations. This includes full VM operations such as restoring a VM, restoring individual files, or diving into other areas of backup on a per VM basis. 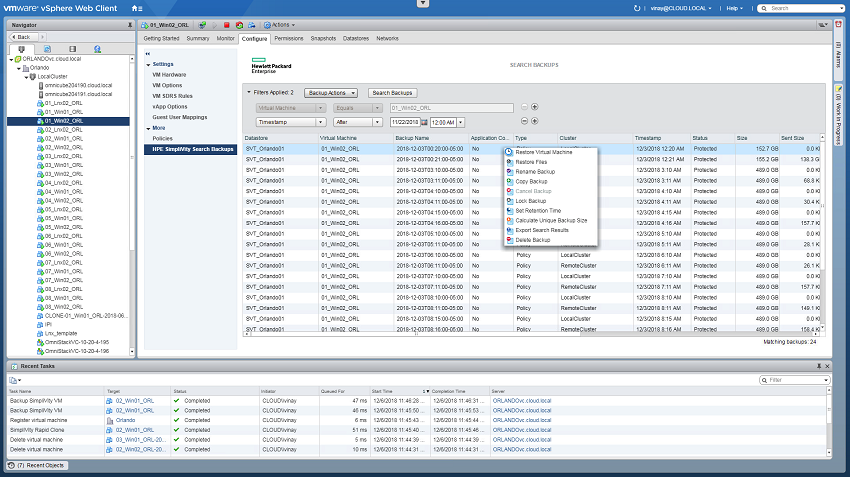 Primary HPE SimpliVity actions are also built in at the cluster level in vSphere, allowing users to handle items such as creating new datastores off available storage, viewing array capacity, monitoring performance or searching through backups. 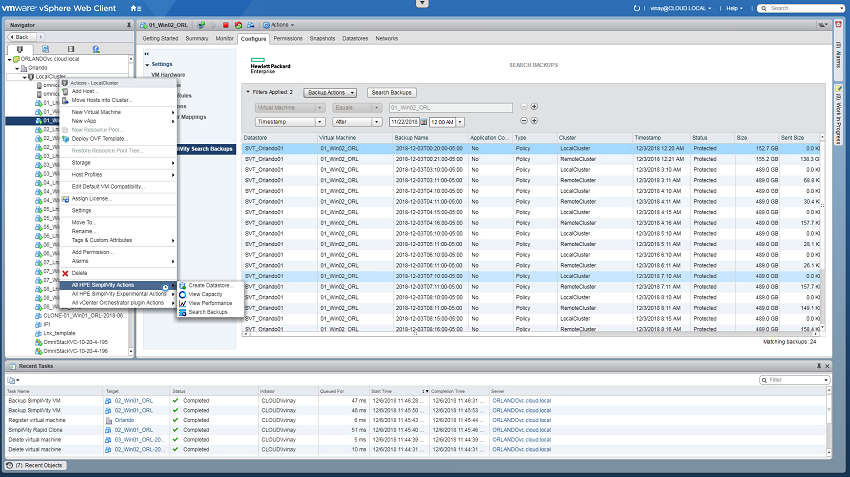 In addition to being easy to operate, maybe the most undersold value of SimpliVity is around what they call the HPE SimpliVity HyperGuarantee. This is a set of features that ensure cluster-wide data efficiency and protection policies are in place while also ensuring simple configuration and fast recoveries. HPE SimpliVity in addition to being HCI, is also accounting for data availability in ways most others in this space are not. To appreciate the benefits of how HPE SimpliVity views availability, it’s important to understand how its software works.

Global dedupe pools are what allows the platform to be so data efficiency, including across sites. Only new data blocks are sent to other clusters for replication to minimize the footprint of storage overall. This also has the benefit of faster replication of backup data itself. Less data needing to be transferred translates into faster backup windows, as well as the ability to replicate data across much slower network links. Some customers push out data over satellite links, which would generally be too slow or too high of latency for others to handle. To increase the speed of data transferred over the WAN, HPE SimpliVity forgoes the tracking of changes or replicated blocks. Instead it leverages an algorithm and metadata to only send unique data that the receiving site has never seen before.

Of course being able to monitor the storage efficiency itself is also built into the management. While the efficiency numbers are quite high in this area, it is important to remember that these figures incorporate both primary storage data reduction as well as backup data reduction. 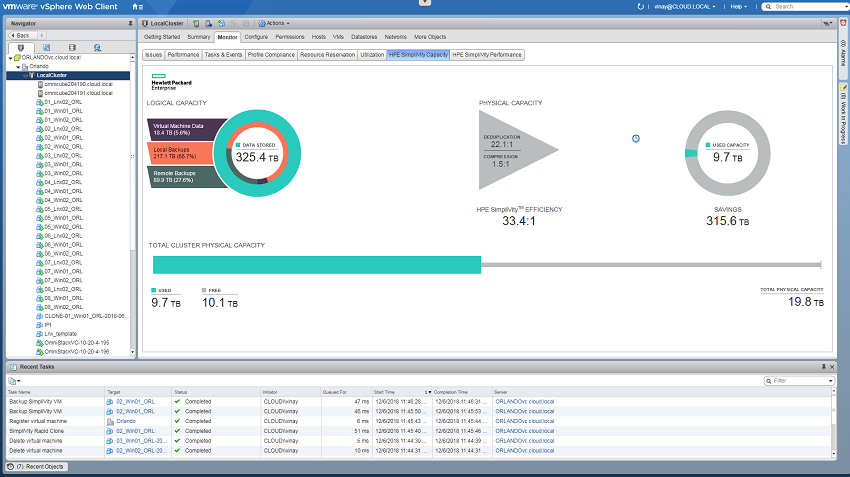 Backup is an integral part of the message, beyond just snapshots and replication that other storage systems focus on. Backup policies are simple to manage, with control also through the vSphere Web Client. 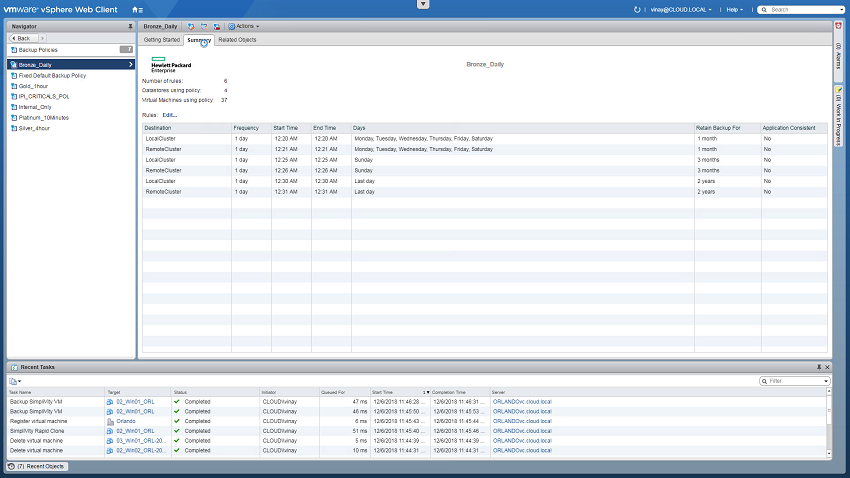 RapidDR is a solution that is designed to address a very specific area of concern for any organization, shortening downtime. The first step HPE SimpliVity takes is automating the recovery processes that include the order in which VMs are powered on, IP address and other network settings, resource centers, and pre- and post-recovery scripts. DR setup and execution itself has been streamlined to save time and costs. The automation lends itself well to improve compliance and reduce risk. Users can create DR plans that put them in the best possible place to avoid financial and legal issues. 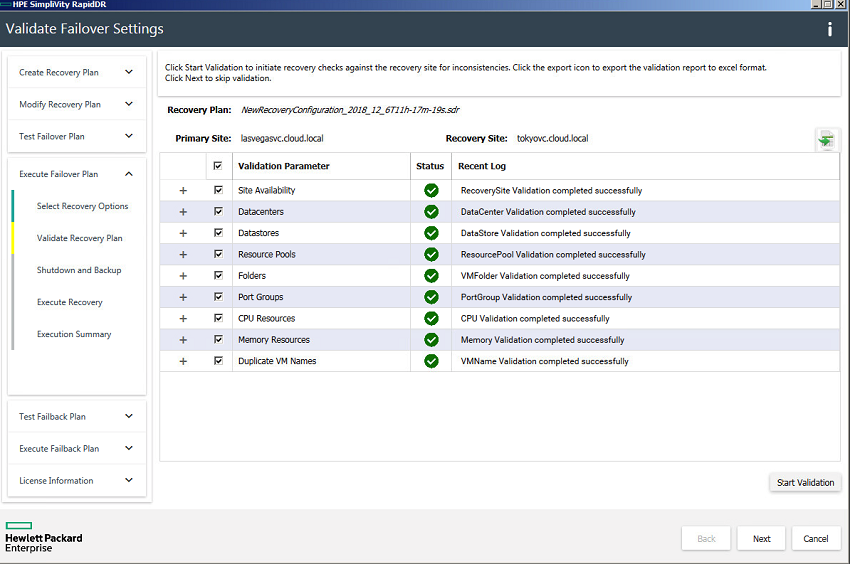 While clearly not intended to be a comprehensive review, this is our first deep dive with HPE SimpliVity since it’s been in the HPE family. From our time hands on, the system is definitely easy to work with, integrating into VMware environments with ease. Further, the entire set of data availability and disaster recovery features are very impressive. Most in HCI leave those sorts of things up to third party applications, which of course HPE SimpliVity supports as well, but for the SMB or remote use case, having such a robust feature set available out of the gate is impressive.

In terms of nodes available, HPE SimpliVity is exclusively on HPE ProLiant hardware. Whether or not that’s a positive depends to some degree about how your IT shop is set up. Large operations may prefer one server over another for management or other reasons, it’s possible HPE SimpliVity will lose out in these cases. The HPE SimpliVity nodes also aren’t yet embracing emerging storage technologies. Some like persistent memory may be overkill for a boxes of this nature, especially given the ASIC. It would be nice though to see NVMe an option to enhance the performance story and to act as a shield from competitors who ding them on this point. HPE may also consider offering larger SSDs or nodes that can take more than 12 drives for a better density story. Their target audience doesn’t appear to be asking for either though as they tend to need compute in conjunction with more capacity, so it’s possible this is a non issue.

From what we can tell the allure with HPE SimpliVity still goes back to their initial roots; from the beginning the team has been working to simplify IT. On that count the product is successful, in the environments we worked in its all very simple. Right click menus have what you need and the options makes sense in the context of the menus. Ramp up time with HPE SimpliVity should be minimal for any virtualization expert, we started at a vanilla install and were operational with backup policies in a few minutes.