Samsung has moved into the market that aims to fill the gap between system memory and storage with its new 983 ZET SSD. So far in this arena we’ve seen, not necessarily the most performant drives, but drives with very low latency. The 983 ZET is an NVMe SSD designed specifically for low latency (with claims Quality of Service (QoS) read/writes of up to 0.03ms at a minimal 20μs latency) for high-performance computing applications as well as emerging technologies that are becoming more common such as AI and IoT.

Samsung has moved into the market that aims to fill the gap between system memory and storage with its new 983 ZET SSD. So far in this arena we’ve seen, not necessarily the most performant drives, but drives with very low latency. The 983 ZET is an NVMe SSD designed specifically for low latency (with claims Quality of Service (QoS) read/writes of up to 0.03ms at a minimal 20μs latency) for high-performance computing applications as well as emerging technologies that are becoming more common such as AI and IoT. 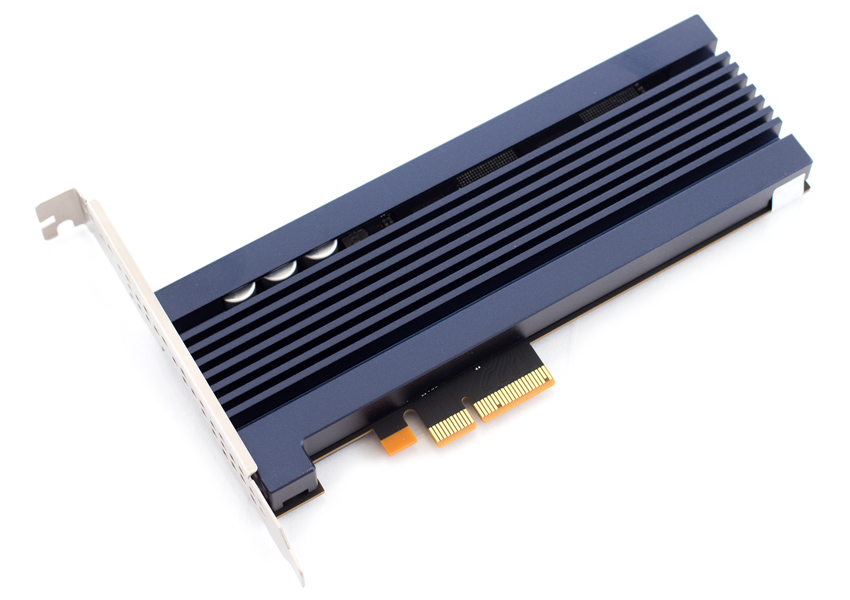 The Samsung 983 ZET leverages a half-height, half-length (HHHL) form factor with PCIe Gen3 x4, NVMe 1.2 interface. Somewhat surprising here is that the drive is built off of Samsung's V-NAND (despite initial Z-NAND marketing) as opposed to some new NAND technology. V-NAND is no slouch when it comes to performance; in fact it tends to lead the field in the testing we’ve done. V-NAND has also proven itself thoroughly for performance, reliability, and overall quality. On the performance side, the 983 ZET is quoted to deliver up to 3.4GB/s and 3GB/s sequential read/write speed, respectively, as well as up to 750K IOPS and 60K IOPS random read/writes, respectively.

For our review of the Samsung 983 ZET we will be testing both the 480GB and the 960GB capacities. At the time of this writing these are the only two capacities offered and again mirror the trend in the gap between memory and storage we’ve seen thus far.

The Samsung 983 ZET SSD’s sport the half-height half-length add-in card (HHHL AIC) form factor. The top of the drive utilizes a ventilated design to protect the internal components from overheating. 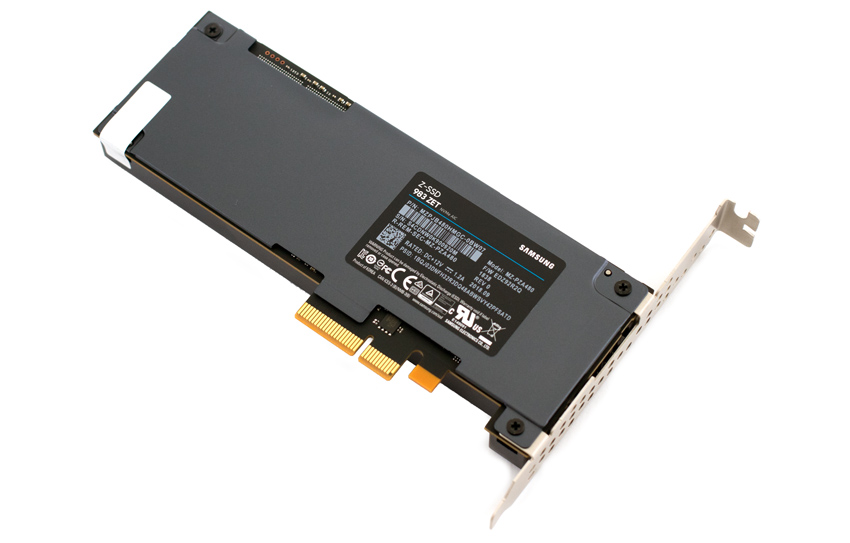 On the bottom of the drive, you’ll find the sticker, which displays the drives information, such as the name, model number, etc. The drive uses a PCI Express Gen3 x4, NVMe 1.2 interface and fits in both full-height and half-height PCIe slots.

The Samsung 983 ZET family disrupted the total Intel Optane reign in our Houdini benchmark, outperforming the 900P 280GB and both of the drives in the 800P class. While it didn’t outperform the P4800X and 900P 480GB, it’s nice to see a drive that brings the Optane family some competition. 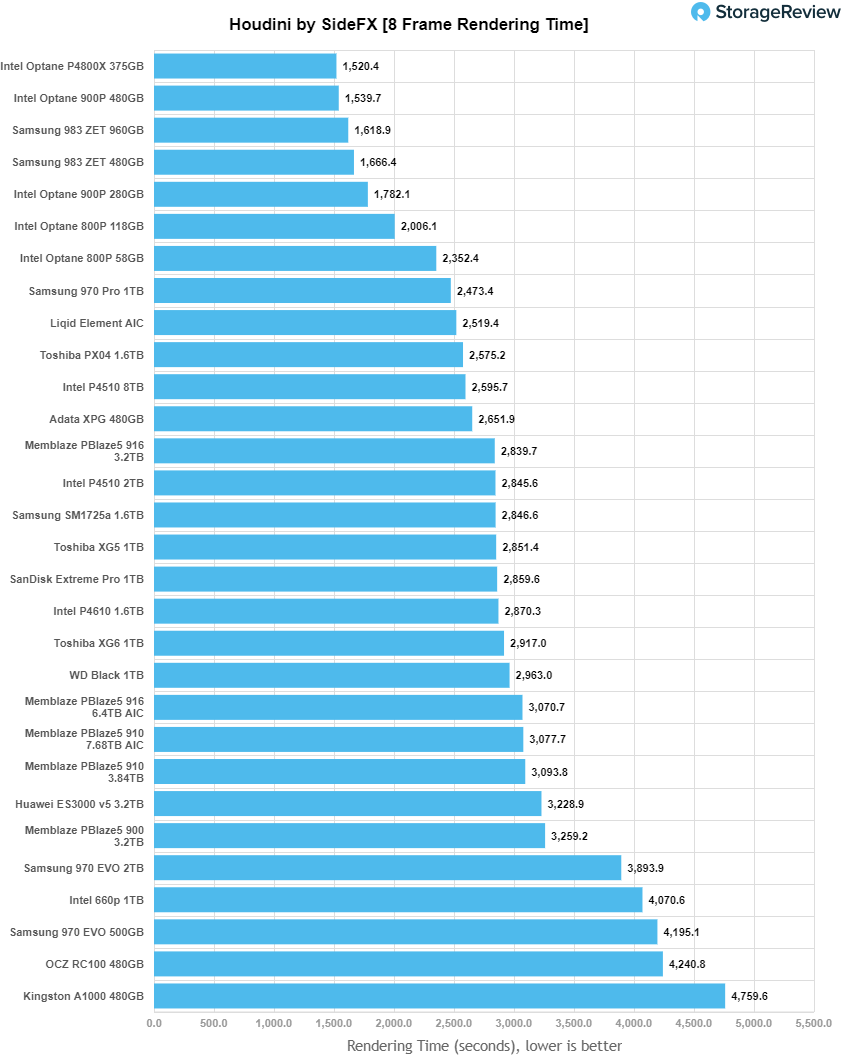 In our first VDBench Workload Analysis, we looked at random 4K read performance. Here, the Samsung 983 ZET 960GB and 480GB models had virtually identical outcomes at 794,946.8 IOPS and 795,418.3 IOPS successfully moving them ahead of the competitive Optane drives. Looking at latency, both drives started around 21.5μs at 159K IOPS and stayed under 50μs until they broke 700K IOPS.

Next, we look at our SQL workload. Here, from a throughput perspective, the ZET drives are able to slightly edge out the Optane comparables in peak performance, but come in with a higher latency across the board. While the ZET offered an impressive 28μs latency and 32.2K IOPS off the bat, the Optane drives measured under 15μs. This gap widened as the loads picked up. So, while the ZET is no doubt faster than traditional NVMe SSD’s, it has trouble keeping up with the low latency offered from Optane. The 480GB ended with 320,007 IOPS with a latency of 99.6μs, and the 960GB with 330,432 IOPS with a latency of 96.4μs.

Next, we switched over to our VDI clone test, Full Clone (FC) and Linked Clone (LC). For VDI FC Boot, when looking at throughput, the ZET drives performed slightly better than the Optane drives. Again though, from a latency perspective, the ZET’s started off several microseconds behind (35μs to 22.7μs), and we see that gap widen as IOPS increase. The ZET drives finished with the 480GB at 168,652.8 IOPS and the 960GB at 177,326 IOPS. The 480GB ran under 100μs until about 145K IOPS and the 960GB went until about 160K IOPS.

With VDI FC Initial Login, the Intel drives largely outperformed the ZET drives in both throughput and IOPS. The 480GB and 960GB ZET’s finished the test at 36,907.96 IOPS and 37,170.65 IOPS, respectively. The Samsung drives started at just under 100μs (84μs) and quickly rose above going on to their peaks.

For the last Full Clone test, we look at VDI FC Monday Login. Here, the ZET drives paint a similar picture, where the Intel drives were the obvious winner. Falling way behind, the ZET 480GB finished with 40,327.82 IOPS and the 960GB with 41,044.6 IOPS. Again both drives started out just under 100μs (75μs at 4,095 IOPS) and quickly rose to their peaks.

The Samsung 983 ZET is the company’s first foray into the market that sits between memory and storage. Like other similar products, the 983 ZET aims for low latency above all else but comes with strong performance claims of 3.4GB/s bandwidth and up to 750K IOPS throughput. The SSD leverages Samsung’s tried and true V-NAND and an NVMe interface. The 983 ZET is designed for high-performance computing applications as well as AI and IoT.

Due to the capacity of the drives we had to forgo our typical Applications Workload Analysis testing with the exception of the Houdini by SideFX. Here the Samsung 983 ZET was able to do something we had not seen before and unseat several of the Optane-based drives. The 960GB version was able to come in third with 1,618.9 seconds and the 480GB was right behind it with 1,666.4 seconds.

For our VDBech Workload Analysis we put it up against the Intel Optane P4800X and 900P, two other drives that would fall into this emerging high-speed storage category. Some of the highlights in overall performance include 795K IOPS in 4K read for both capacities, 3.1GB/s in 64K sequential reads for both, top place in SQL with 320K IOPS for 480GB and 330K IOPS for 960GB, 231K IOPS and 255K IOPS in SQL 90-10, 227K IOPS and 254K IOPS in Oracle 90-10, top place in our VDI FC Boot with 169K IOPS and 177K IOPS, and in our VDI LC Boot it hit 102K IOPS and 105K IOPS. While these are fairly good numbers, this type of technology is more geared around low latency. Here the 983 ZET had several shining moments including staying under 50μs in 4K read until it was over 700K IOPS, staying neck and neck with the Optane in 4K write until 190K IOPS or so, staying in sub 100μs in 64K read until 2.3GB/s, and running along with the Optane in 64K write until about 843MB/s. In our Oracle and SQL tests the latency was less impressive but tended to start around or under 30μs and peaked between 96.3μs and 243μs. While the drive trailed the Optane in most tests, it flat out crushes a "normal" NVMe drive in terms of latency.

Overall, the 983 ZET shows a commitment by Samsung to join Intel in offering a storage product that sits between system memory and traditional SSDs in terms of latency. While low latency V-NAND doesn't unseat Optane in these our tests with write workloads mixed in, we do see advantages in pockets such as read performance. The 983 ZET drives are able to offer an edge in peak read throughput, both small and large block, although at a higher overall response time. There is no doubt the 983 ZET offers a substantial improvement over traditional NVMe SSDs, putting the pressure back on pricing and capacity requirements.