The HGST Ultrastar C10K900 is an enterprise-class, 2.5" HDD that interfaces over SAS, has a spindle speed of 10,000RPM and ranges up to 900GB in capacity. The Ultrastar C10K900 also comes in at a 14.8mm z-Height, classing it in the 15mm category. That small form factor helps to reduce organizations’ overall TCO, especially in networked storage arrays or any space and/or power constrained environments. On top of that, other optimal environments for the Ultrastar C10K900 are blade and rack-mounted servers for applications such as online transaction processing (OLTP), any high performance scenario, and cloud computing.

The HGST Ultrastar C10K900 is an enterprise-class, 2.5" HDD that interfaces over SAS, has a spindle speed of 10,000RPM and ranges up to 900GB in capacity. The Ultrastar C10K900 also comes in at a 14.8mm z-Height, classing it in the 15mm category. That small form factor helps to reduce organizations’ overall TCO, especially in networked storage arrays or any space and/or power constrained environments. On top of that, other optimal environments for the Ultrastar C10K900 are blade and rack-mounted servers for applications such as online transaction processing (OLTP), any high performance scenario, and cloud computing. 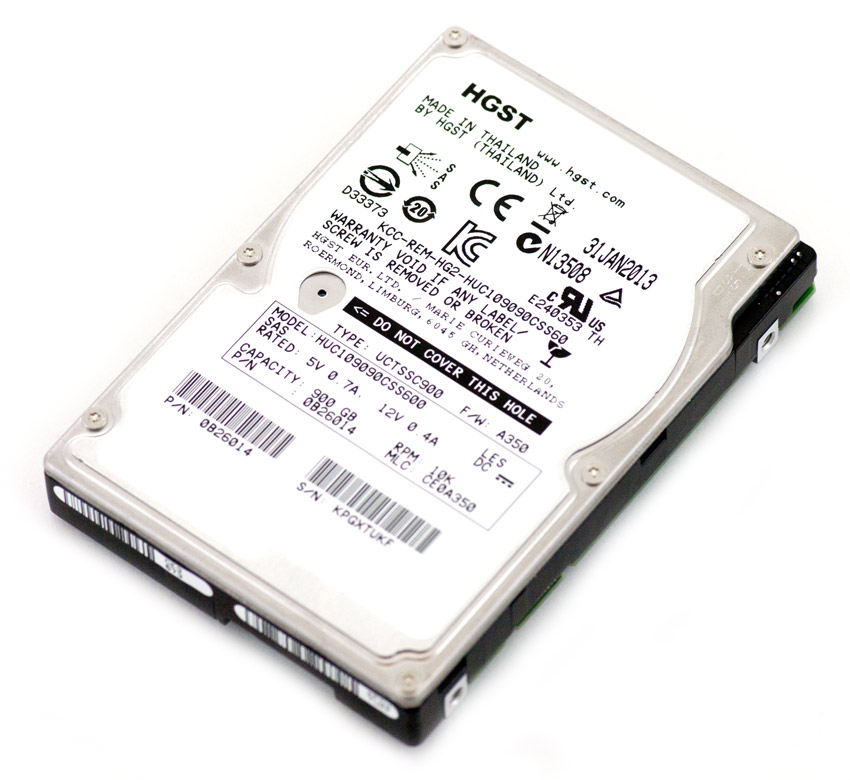 The Ultrastar C10K900 is also offered as a self-encrypting drive (SED), which is indicated by a 1 instead of a 0 at the end of the model number (for instance HUC109090CSS601). Hitachi has been working with TCG (Trusted Computing Group) to meet its SED specs which promote interoperability based on industry standards. Both the C10K900 and its higher capacity sibling C10K1200 are designed to the TCG Enterprise A Security Subsystem Class encryption specification. There are several benefits to the spec including faster setup, improved portability, enhanced system performance, and greater scalability in multi-drive scenarios. All of these benefits come as the encryption is done locally on the drive.

The HGST Ultrastar C10K900 enterprise hard drives have a professional appearance. The top cover is entirely taken up by the HGST product information label which provides relevant drive information (SAS interface, 900GB, model number, etc.). Six visible screws help to keep the cover in place. The sides of the HGST Ultrastar C10K900 feature four screw holes that enable convenient mounting. On the rear of the drive, there are connectors for both power and SAS. 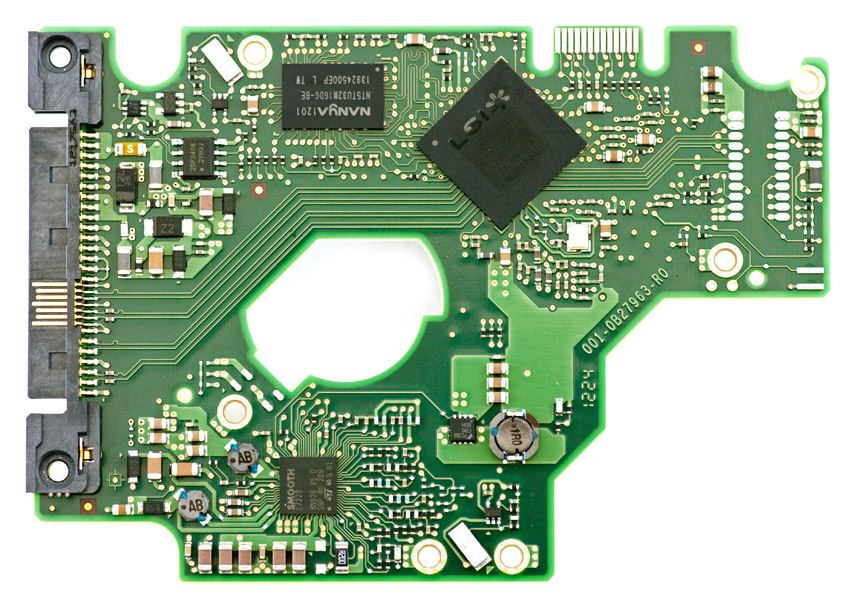 The circuit board features an LSI OB26546 controller and 64MB of cache from the Nanya NT5U32M16DG-BE DRAM. Internally, there are 3 platters at 300GB each on 900GB models.

In the first of our enterprise workloads, we measured a long sample of random 4k performance with 100% write and 100% read activity to get our main results. The HGST Ultrastar C10K900 measured 460 IOPS read and 405 IOPS write, both of which were class-leading figures.

In our main average latency segment with a load of 16T/16Q, we measured an average read latency of 555.66ms and a write latency of 630.71ms from the HGST Ultrastar C10K900, which again was in the best from the group.

Reviewing the 4k latency consistency in our standard deviation section, the HGST Ultrastar C10K900 tested at the back of the group in standard deviation with 314.16ms (edging out just the Toshiba MBF2600RC 600GB) for read activity and 241.62ms for write activity.

Compared to the fixed 16 thread, 16 queue max workload we performed in the 100% 4k write test, our mixed workload profiles scale the performance across a wide range of thread/queue combinations. In these tests, we span workload intensity from 2 threads and 2 queue up to 16 threads and 16 queue. In the expanded 8k 70/30 test, the HGST Ultrastar C10K900 placed at the top with its throughput eventually exceeding that of the Seagate Savvio 10K.6’s with around 440 IOPS in the terminal queue depth. 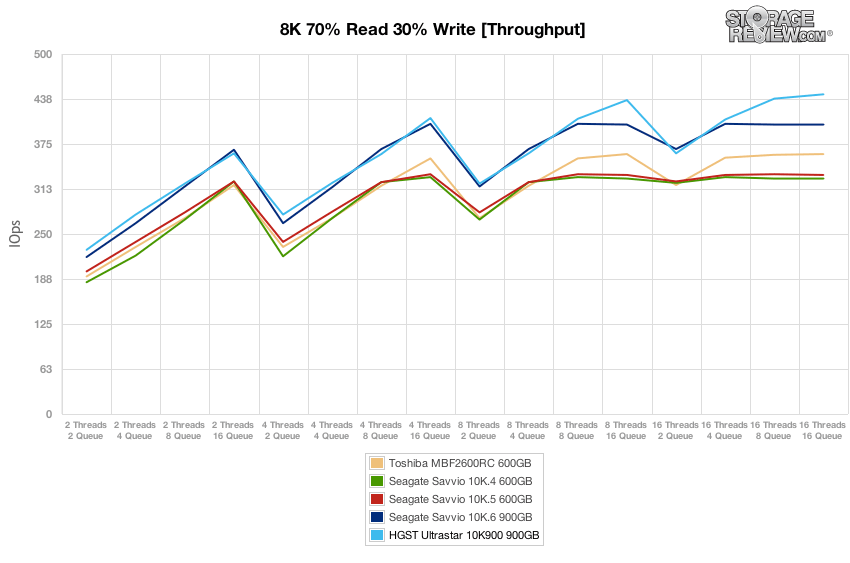 Looking over the 8k 70/30 average response times, the drives all maintained pace with the HGST Ultrastar C10K900, though the HGST drive was able to edge them out in the terminal queue depths. 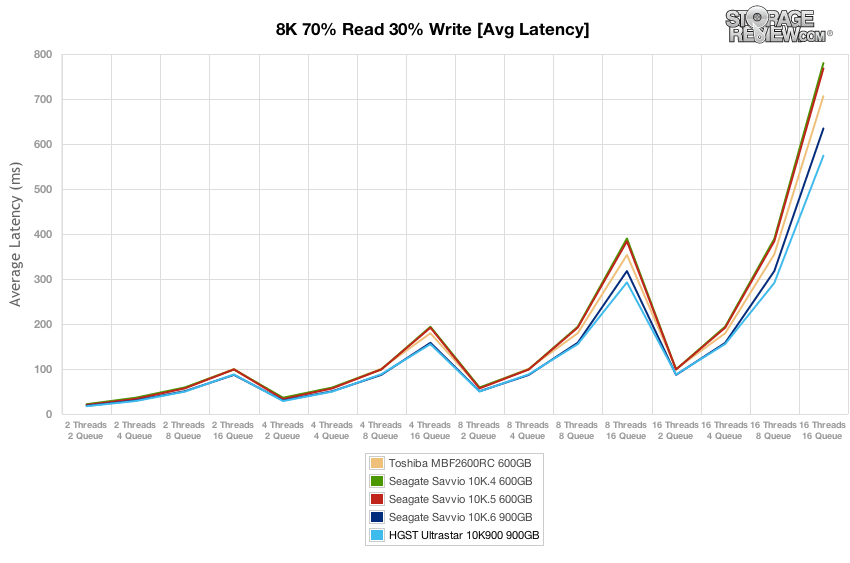 Over the duration of our primary tests at varying thread and queue depth levels, the HGST Ultrastar C10K900 had competitive max latency with the lowest max latency at 2T2Q along with the Toshiba MBF2600RC, though both of those drives peaked for the highest max latency at 16T16Q around 2700ms. 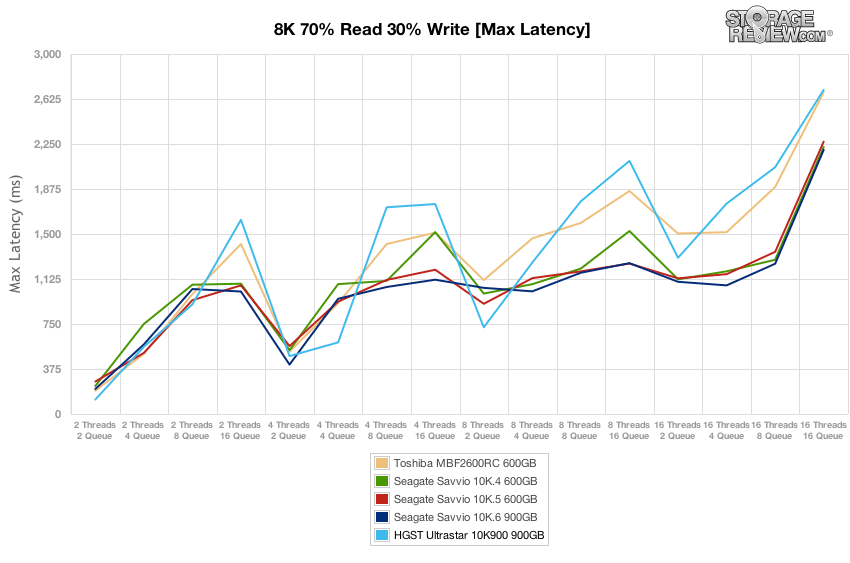 For the majority of the thread/queue spectrum, the HGST Ultrastar C10K900 maintained latency just higher than most of the competition until 8T16Q. Then, it spiked quite a bit higher than the other drives for the remainder of the testing. 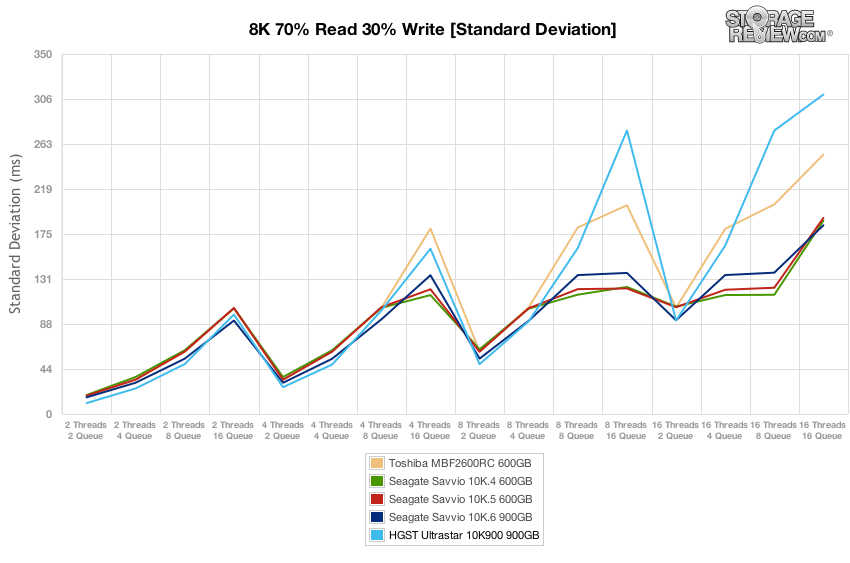 The next workload we used is our File Server profile which puts the drives through a varying workload. We scaled the thread and queue count from 2T/2Q up to 16T/16Q. Under this range of workloads, the HGST Ultrastar C10K900 ranked at the top the group with a max of around 440 IOPS for the best overall throughput again. 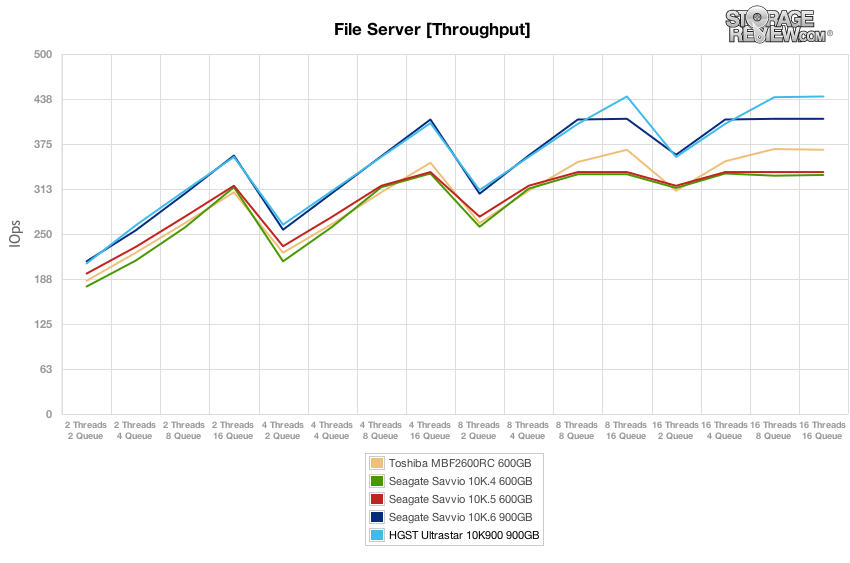 At all queue depths, the HGST Ultrastar C10K900 managed to beat out the other drives with its average latency peaking at about 580ms. 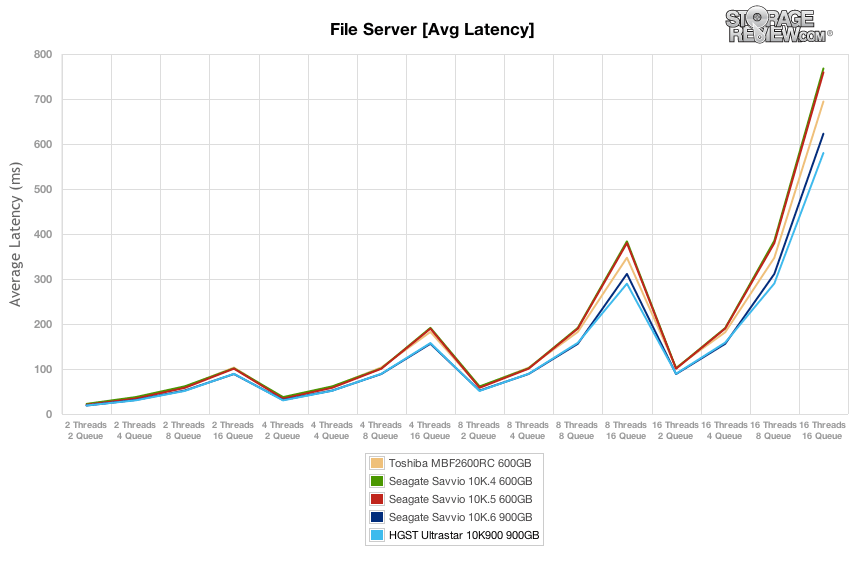 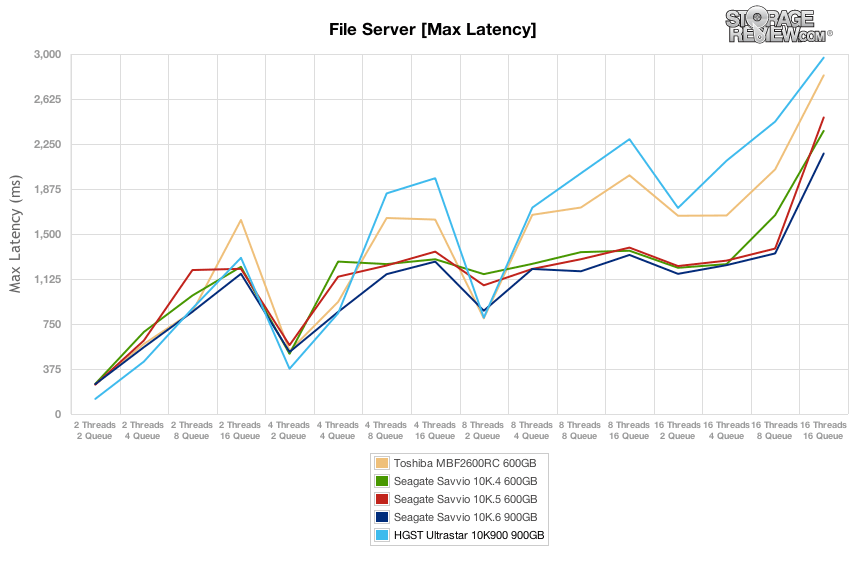 Looking at the latency standard deviation, the HGST Ultrastar C10K900 was at the back of the group again in this category of the testing. 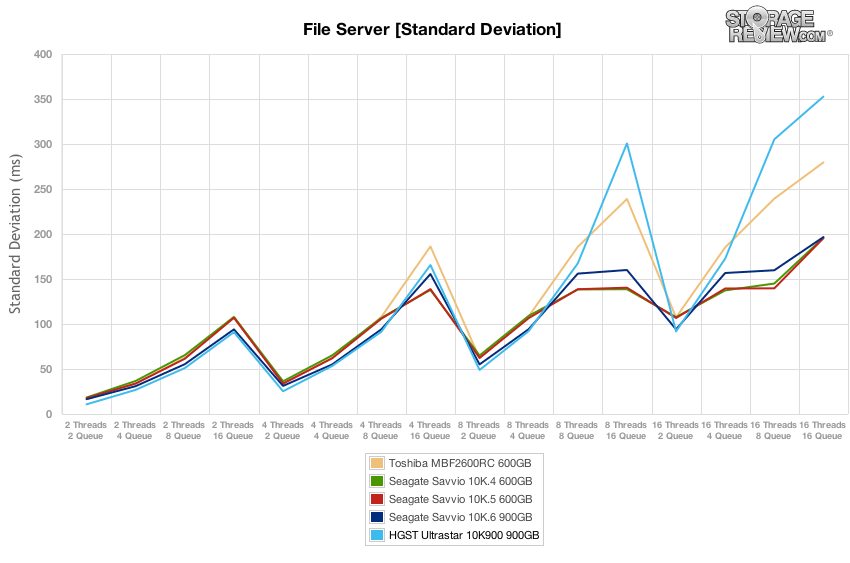 Our final test is the Web Server test, which is traditional 100% read activity. The HGST Ultrastar C10K900 peaked at around 435 IOPS at 16T8Q. That placed it just above the Seagate Savvio 10K6. 900GB. The HGST performed just above the Seagate Savvio 10K.6 in our next test of average latency in the Web Server profile for a class-best mark. Looking at Max Latency in our Web Server profile, the HGST Ultrastar C10K900 performed with the highest max response in the terminal queue depth at around 3300ms. 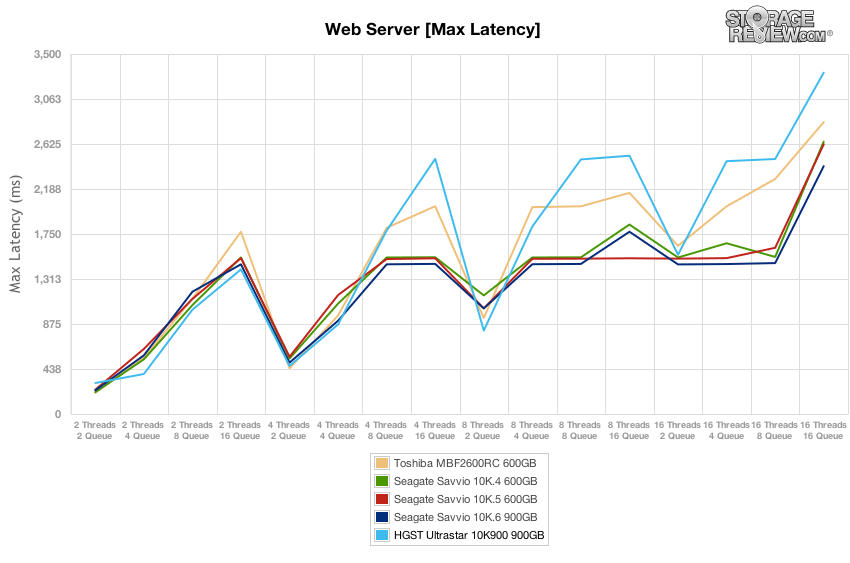 Comparing latency consistency in our read-only Web Server profile, the HGST Ultrastar C10K900 again found itself at the back of the group, though it was able to edge the Toshiba drive this time. The HGST Ultrastar C10K900 slots into the 2.5", 15mm z-Height class and offers up to 900GB of capacity in that small form factor. The size means that organizations can still fit a bunch of drives, and consequently a lot of raw storage, in space-constrained environments. Adding to that, the C10K900’s low power rating should drive down the TCO. The C10K900 is also a SAS drive that spins at 10,000RPM which designates it as a more performance-intensive drive than a SATA interface and/or 7,200RPM drive. HGST envisions organizations implementing the C10K900 for OLTP, cloud computing, etc. in blade or rack-mounted servers. Being that the drive is optionally offered as self-encrypting, the Ultrastar C10K900 can provide the high level data security that organizations may require.

Organizations implementing HDDs with a 10,000RPM spindle speed aren’t simply looking for robust capacity in a small form factor; they also require performance. In our testing, the HGST Ultrastar C10K900 provided more than enough performance to satisfy those needs. The drive consistently had the greatest throughput, beating out all of the drives in all of the testing: 4k, 8k, as well as the file server and web server profiles. When it came to latency performance, it was fairly impressive, though not quite as robust. The Ultrastar C10K900 had the highest peaks for max latency and standard deviation in all of the testing environments except for the Web Server max latency where it was second from the bottom. On the other hand, the drive’s pace was class-leading in average latency in all of the tests.

Organizations looking for relatively robust storage capacity in a small form factor with class-leading throughput will find just that in the SED-optional HGST Ultrastar C10K900.