The Synology DS1513+ is a 5-bay NAS that provides up to 20TB of raw storage with the ability to scale out to 60TB using expansion bays, and it features a dual core 2.13GHz processor, 2GB of RAM and Synology’s DiskStation Manager 4.2 (DSM 4.2) software. The device is also shipped with loads of connectivity via USB 3.0 and 2.0, Ethernet and eSATA ports. The next-generation DS1513+ adds on to the DS1512+ (which will still sell concurrently) and is designed for the enterprise SMB market. Compared to the DS1512+, the DS1513+ provides increased throughput, more redundancy and easier business application usage. Another stanadard feature that Synology includes is High Availability which works to prevent drawn-out downtime and performs network load balancing to optimize storage across drives.

The Synology DS1513+ is a 5-bay NAS that provides up to 20TB of raw storage with the ability to scale out to 60TB using expansion bays, and it features a dual core 2.13GHz processor, 2GB of RAM and Synology’s DiskStation Manager 4.2 (DSM 4.2) software. The device is also shipped with loads of connectivity via USB 3.0 and 2.0, Ethernet and eSATA ports. The next-generation DS1513+ adds on to the DS1512+ (which will still sell concurrently) and is designed for the enterprise SMB market. Compared to the DS1512+, the DS1513+ provides increased throughput, more redundancy and easier business application usage. Another stanadard feature that Synology includes is High Availability which works to prevent drawn-out downtime and performs network load balancing to optimize storage across drives. 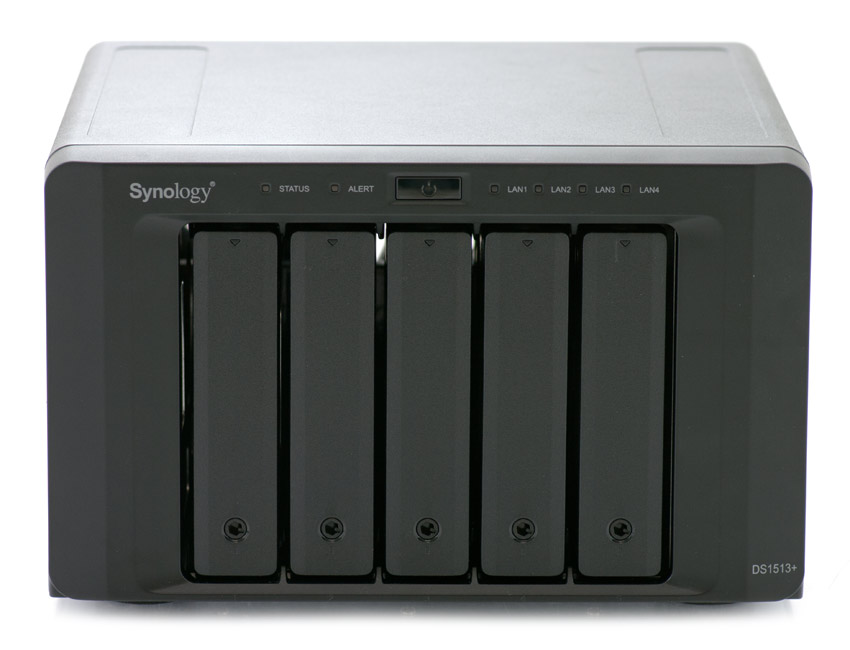 Scalability is an important issue for businesses that are growing or anticipate data growth. The Synology DS1513+ is designed with this in mind and provides two eSATA ports which can connect to DX513 expansion units. The DX513 offers users an additional 5 bays, meaning that with two added on, users can have as many as 15 drives populating their DS1513+ and DX513 units. Also adding to value, Synology has designed the DS1513+ so that is supports both 2.5″ and 3.5″ SSDs and HDDs in varying capacities. IT can implement existing drives, use new drives mixed with legacy drives, or can implement a range of capacities to meet a specific budget goal.

The DS1513+ also implements link aggregation that utilizes all four Ethernet ports (up from two on the previous generation) so that the NAS unit can reach quoted speeds as high as 200MB/s write and 350MB/s read. Link aggregation also provides redundancy in the event of network link failure. Further, the Ethernet ports can be configured for MPIO, iSCSI, increased throughput and network node redundancy. MPIO and High Availability were previously only available on RackStation devices from Synology.

The Synology DS1513+ has a street price of around $880 and comes with a three year warranty.

The design of the DS1513+, while definitely employing some notable additions, is similar to that of the DS1512+. The unit is composed of solid black metal that implements plastic sparingly (drive trays, etc.). On the front of the DS1513+, there are LED indicators showing activity across the top front of the unit. Also featured in the center, there is the power button. Meanwhile, the sides of the unit simply display Synology branding. 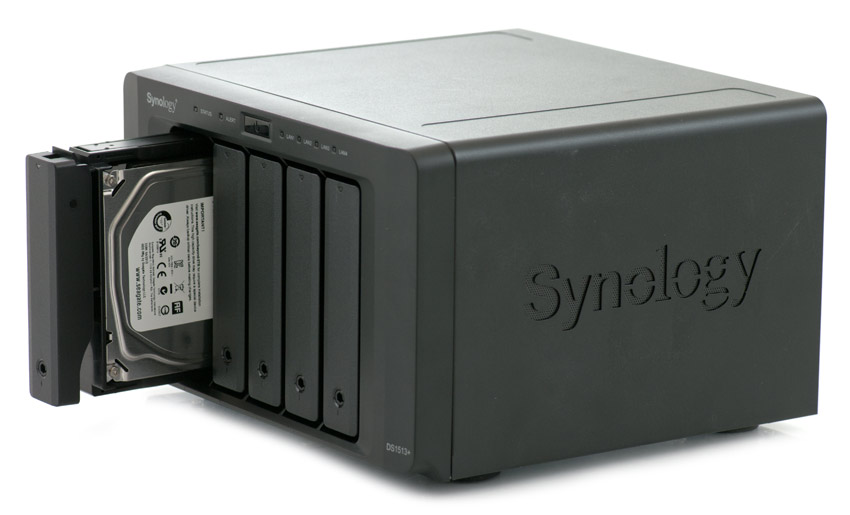 Moving to the rear of the unit, there are dual 80x80mm fans, along with the ports: 4x Ethernet LAN, 2x eSATA, 2x USB 3.0 and 4x USB 2.0. The left side also provides a Kensington lock slot and power connection, while the right side features a pinhole reset button. 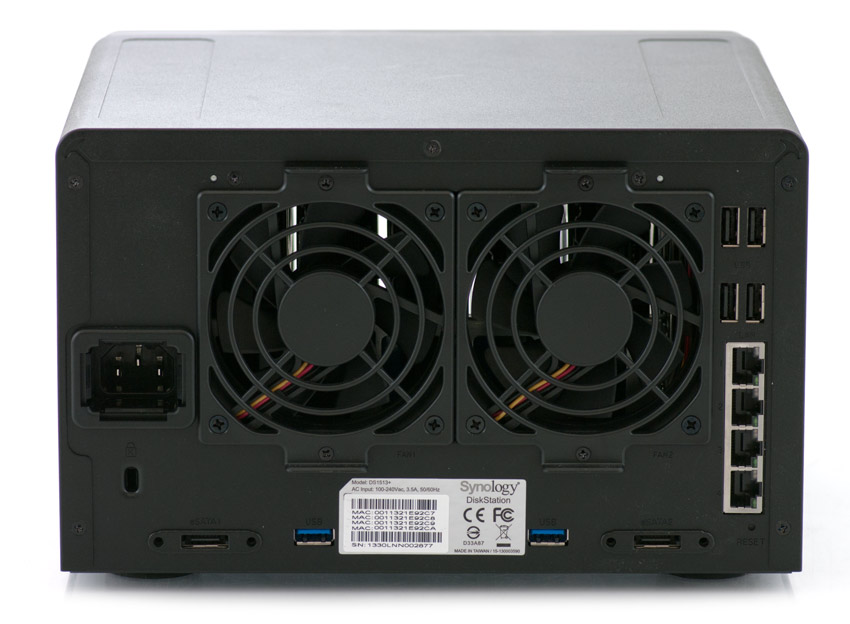 To open the drive bays on the DS1513+, users just push the doors which have a spring-loaded latch. (The doors can be locked to prevent unauthorized access.) The DS1513+ uses standard 3.5″ drive trays and the five bays are all hot-swappable. 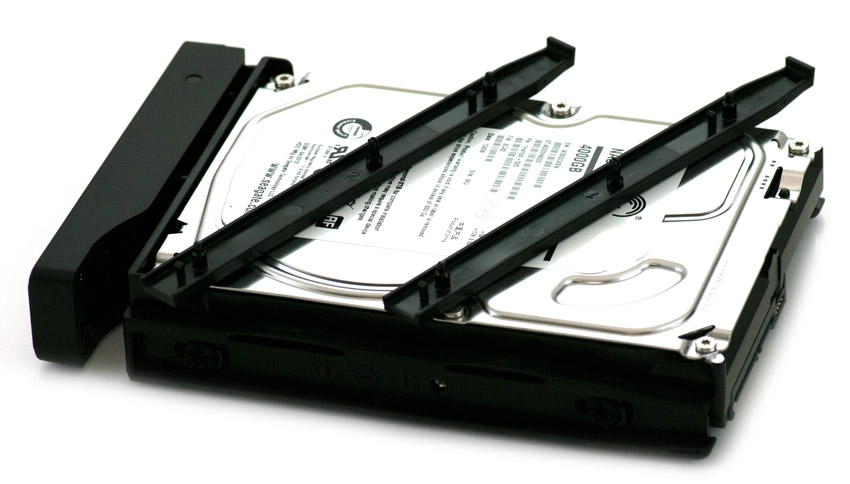 The bays provide tool-less access making installation and maintenance a breeze. As with the previous model, drives can be mixed and matched to fill the five bays.

For this test, we tested over both SMB and iSCSI shares in a RAID 5 configuration for all three drives: the WD Red, Hitachi 7K4000 and Seagate NAS. This also marks the first time we’ve tested in this sort of environment utilizing the new Seagate NAS that we just recently reviewed. Both the Seagate NAS and WD Red are designed specifically to tackle NAS workloads and operate in NAS environments.

This benchmarking for the Synology DS1513+ was completed on our second-generation enterprise testing platform based on a Lenovo ThinkServer RD630. This new Linux-based testing platform includes the latest interconnect hardware such as the LSI 9207-8i HBA as well as I/O scheduling optimizations geared towards best-case flash performance. For synthetic benchmarks, we utilize FIO version 2.0.10 for Linux and version 2.0.12.2 for Windows.

In the first of our enterprise workloads, we measured a long sample of random 4k performance with 100% write and 100% read activity to get our main results. The Seagate NAS 4TB RAID 5 iSCSI provided the greatest throughput in read activity at 1085 IOPS, while the best for write activity was delivered from the Hitachi 7K4000 RAID 5 SMB at 656 IOPS.

In our main average latency segment with a load of 16T/16Q, we measured an average read latency of 235.71ms and a write latency of 939.62ms from the Seagate NAS 4TB RAID 5 iSCSI. The read figure was the lowest response time, but the write was edged out by the Hitachi 7K4000 4TB RAID 5 iSCSI.

Measuring just read activity, the WD Red 3TB RAID 5 iSCSI had a class-leading max response time of 878.0ms while the write activity max latency was the highest amongst the group at 18,515.0ms. The lowest write max latency came from the Seagate NAS 4TB RAID 5 SMB.

Compared to the fixed 16 thread, 16 queue max workload we performed in the 100% 4k write test, our mixed workload profiles scale the performance across a wide range of thread/queue combinations. In these tests, we span workload intensity from 2 threads and 2 queue up to 16 threads and 16 queue. In the expanded 8k 70/30 test, the Seagate NAS 4TB iSCSI provided the greatest throughput for a solid majority of the test before being outpaced by the Hitachi 7K4000 4TB iSCSI in the terminal queue depths. 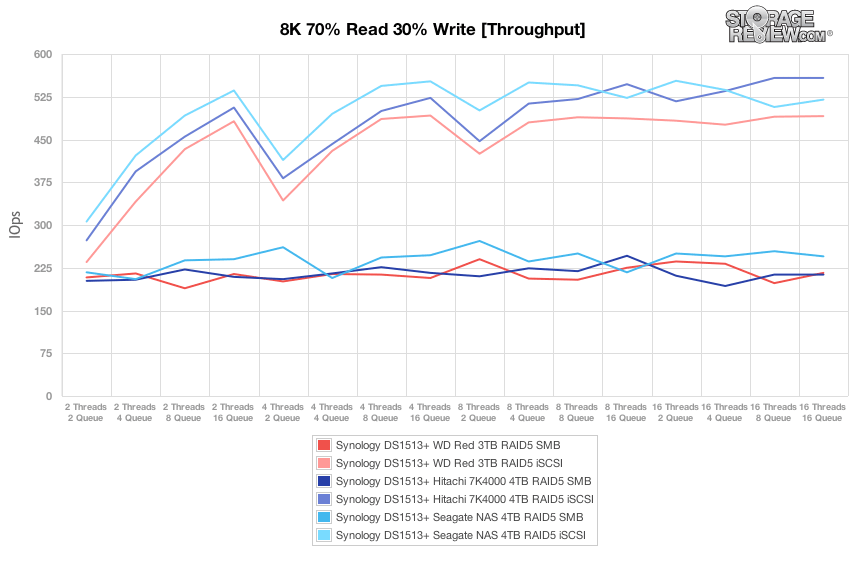 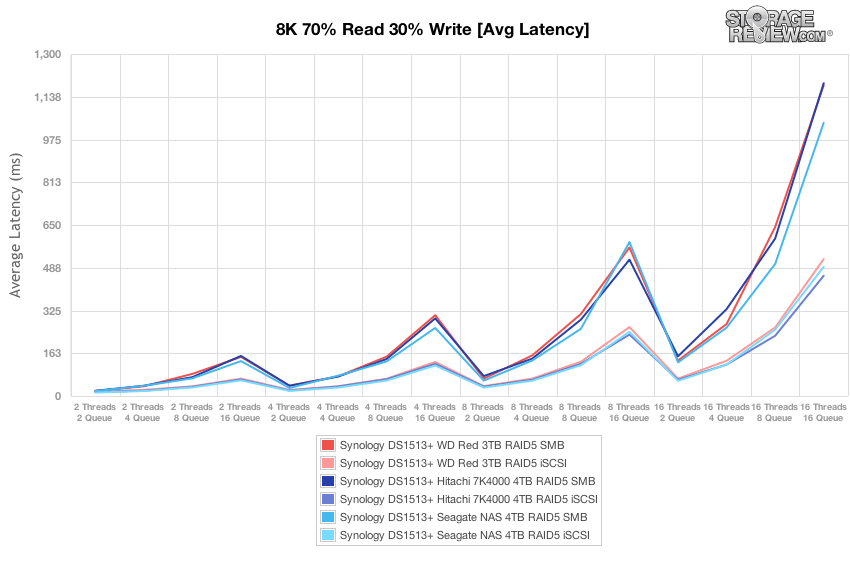 Over the duration of our primary tests at varying thread and queue depth levels, the WD Red 3TB iSCSI had consistently lower max latency than the other drives peaking near 2000ms. Just barely above it, the Seagate NAS 4TB iSCSI also placed well. 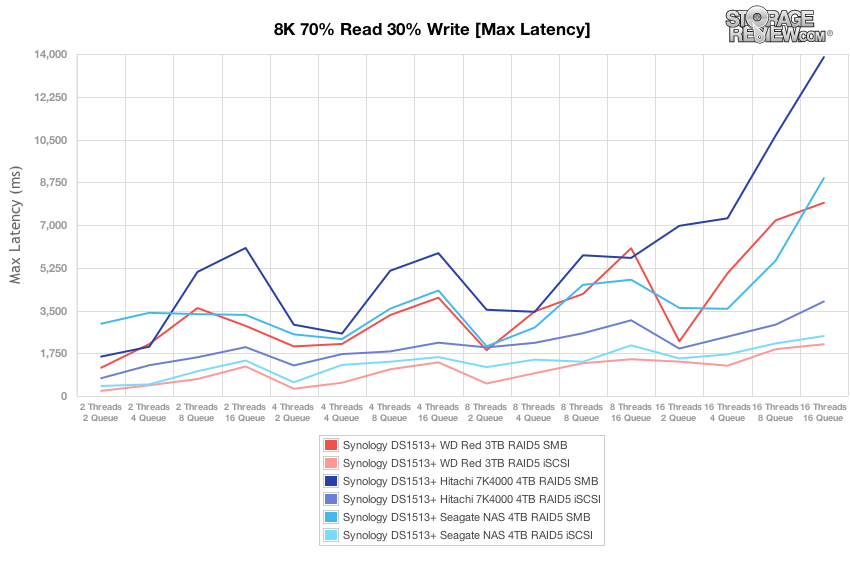 For the entirety of the thread/queue spectrum, the Seagate NAS 4TB iSCSI and the WD Red 3TB iSCSI performed neck and neck, and the Seagate NAS won out by just a tiny bit. 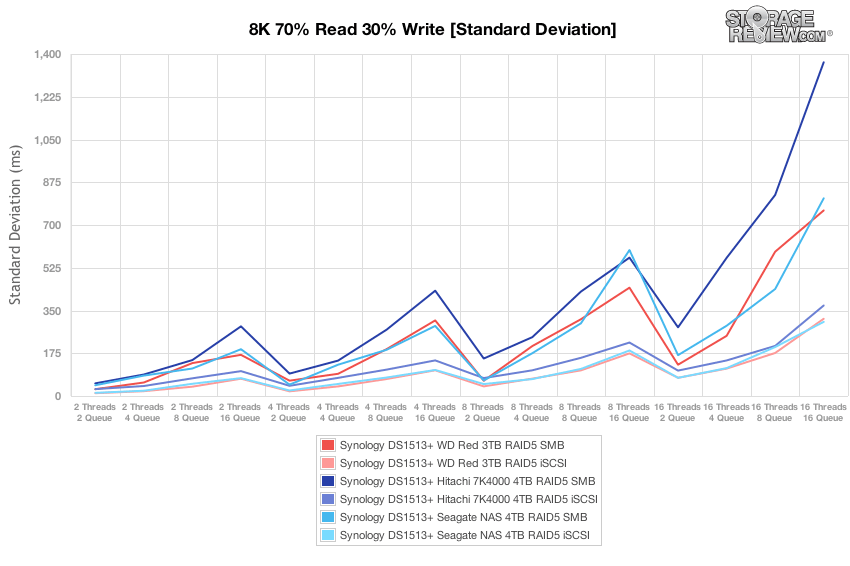 The next test in our Enterprise Synthetic Workload testing is the 128k test which is a large block sequential test that shows the highest sequential transfer speed for a platter drive. Looking at the 128k performance of 100% write and 100% read activity, the Seagate NAS 4TB iSCSI delivered the greatest throughput for read activity at 226,719KB/s, while its SMB performance delivered the greatest write activity mark by a large margin at 170,058KB/s write.

The Synology DS1513+ is a 5-bay NAS that provides up to 20TB of raw storage that can be scaled to 60TB using DX513 expansion bays. For performance, the DS1513+ now offers 2GB of RAM (which can be expanded to 4GB) and features a daul core 2.13GHz processor. Another update for this generation is the implementation of 4 Ethernet ports that tack on the USB 3.0, USB 2.0 and eSATA ports. The DS1513+ also can also utilize Synology Hybrid RAID which automatically optimizes the RAID configuration across multiple dissimilar HDDs populating the 5 bays. Those five bays can also be populated with a range of drives from SSDs to HDDs, or a mix.

Measuring performance for our testing, we implemented a RAID5 configuration utilizing three different HDDs employing both block and file shares with iSCSI and SMB. Two of the HDDs we tested are 5K-class drives – the WD Red and the Seagate NAS. As the branding indicates however, the HGST 7K4000 is a 7K-class drive. Additionally, the 5K-class HDDs are designed specifically for 24/7 operation in NAS environments running NAS workloads. Testing the Synology DS1513+ in this manner provides a balanced evaluation that displays results from a range of environments showing what the system is capable of with a variety of drives.

When we look at throughput, the top performer for 4k, 8k and 128k shifted between 5K and the 7K drives. The Seagate NAS delivered the greatest 4k Read activity throughput, but the HGST 7K4000 bested all drives in write activity. Overall, the Synology DS1513+ was able to pump out 1100 IOPS read and 650 IOPS write from the top performers. In 8k testing, the Seagate NAS and HGST 7K4000 jousted, though the HGST eventually won out with over 550 IOPS. For 128k, the 5K-class drive produced far greater throughput, ranging as high as 226,000KB/s for read activity and 170,000KB/s for write activity.

In terms of latency performance, again there wasn’t a clearcut top performer when populating the Synology DS1513+. The 4k and 8k average latency proved a generally stronger area for the HGST 7K4000, but the 4k and 8k max figures swung strongly in favor of the 5K-class drives. In 4k standard deviation, the HGST 7K4000 was solid in write activity, but was bested in reads. For 8k standard deviation, the 5K-class drives had the edge.

The Synology DS1513+ 5-bay NAS enables SMBs to scale to growth with raw capacity that ranges up to 20TB natively and can be augmented by DX513 units for up to 60TB. The system also delivers robust performance with link aggregation functionality that can utilize all four Ethernet ports.