Hitachi SimpleDrive external hard drives are value-oriented storage solutions with the core essentials.  This version of the SimpleDrive is Hitachi’s third and comes in 500GB, 1TB and 2TB capacities.  Our review model has a whopping 2.0TB of storage, a USB 2.0 interface and is ready to handle as much data as you can throw at it.

Hitachi SimpleDrive external hard drives are value-oriented storage solutions with the core essentials.  This version of the SimpleDrive is Hitachi’s third and comes in 500GB, 1TB and 2TB capacities.  Our review model has a whopping 2.0TB of storage, a USB 2.0 interface and is ready to handle as much data as you can throw at it. 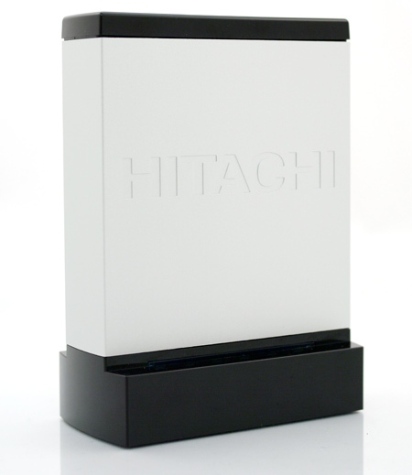 The Deskstar 7K2000 supports Hitachi’s HiVERT (Hitachi Voltage Efficiency Regulator Technology) power-saving technology. According to Hitachi, HiVERT improves the efficiency of “stepping down” the power the drive receives from the 5V and 12V lines to lower voltages to power other components inside the hard drive. The voltage step-down method is the primary determinant of the hard drive’s overall power efficiency.

The SimpleDrive looks like its name implies: simple. It has a very clean design with a two-tone silver and black color scheme with blue LED accent that wraps around the base when the drive is powered on.  The black parts are a glossy plastic while the silver enclosure is aluminum. The drive feels quite solid (at 2.2 pounds it should) in the hand and has excellent fit and finish; all parts fit together neatly with even spacing. There are no visible screw holes anywhere on the unit. 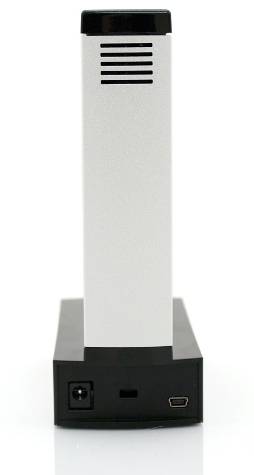 This drive is only designed to be used in an upright position; the stand is permanently attached. The drive can tip about 15 degrees left or right before it will fall on its side. There are four rubber feet embedded in the bottom of the stand which help keep the drive from slipping.

The drive’s connections are located in the back of the stand base. The DC power jack is on the left, a Kensington lock slot is in the center, and the mini-USB connector is on the right. All ports are labeled, and the power and USB ports have a secure, wiggle-free fit with the included cables. 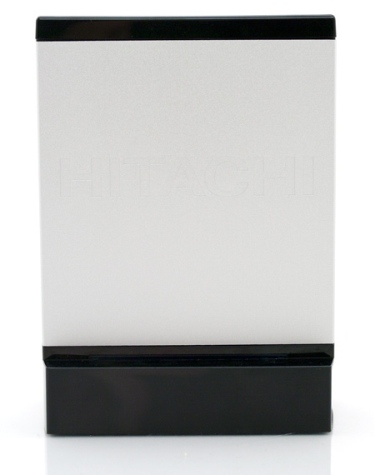 Attempting to disassemble the SimpleDrive’s case was an exercise in futility; this drive appears to be permanently sealed. We consider this to be one of the SimpleDrive’s cons; while opening the drive voids the warranty, the case could still be useful should the internal drive fail after the warranty period expires.

The SimpleDrive 2.0TB drive takes a significant amount of time to spin up – 15 seconds. This can get annoying when the drive powers down after inactivity; any program that wants to access the drive will be held up while the drive is spinning up until it is ready.

I could feel the vibrations from the SimpleDrive through the desk surface it was resting on. I eventually became used to it however the vibrations made it difficult to forget the drive was on. When the drive is powered off the difference is very noticeable.

The SimpleDrive’s activity indicator light consists of a horizontal blue light bar running along the top of the stand, just below where the aluminum enclosure starts. It is always on when there are USB and power connections and blinks when the drive is accessed by the computer. The light is not too bright and the rectangular shape adds to the drive’s simple lines.

The SimpleDrive 2.0TB unfortunately has a significant noise level; read/write clicks are easily noticeable while having a normal conversation with someone. In our localized sound test where we apply a stethoscope to the center of the external drive’s casing, we saw average rates of 47 decibels during read and 63 decibels during peak drive use. Comparatively, these rates make the Hitachi SimpleDrive one of the loudest external drives we’ve tested.

Additionally, the drive has a high ambient noise level; from several feet away, the SimpleDrive can be heard humming away. The aluminum casing exacerbates the noise level; in a plastic enclosure (or even if this enclosure was lined with plastic), the noise would be more muffled.

After an hour of read/write disk activity we measured the external temperature at 100.5F with a laser thermometer, and HDTune reported the internal hard drive temperature at 56C (133F). The SimpleDrive is evidently not as well cooled as we prefer; 56C is close to the drive’s maximum rated operating temperature of 60C. The SimpleDrive’s enclosure has some vent holes but no active cooling mechanism. The aluminum enclosure functions partially as a passive heatsink but is no substitute for a proper active cooling system.

The SimpleDrive 2.0TB’s sole means of connecting to a computer is through USB 2.0, which maxes out around ~30MB/s for sequential reads and writes. The SimpleDrive is easily capable of maxing out USB 2.0’s bandwidth as our benchmarks show: 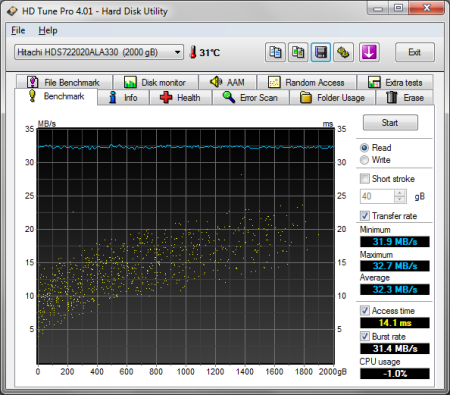 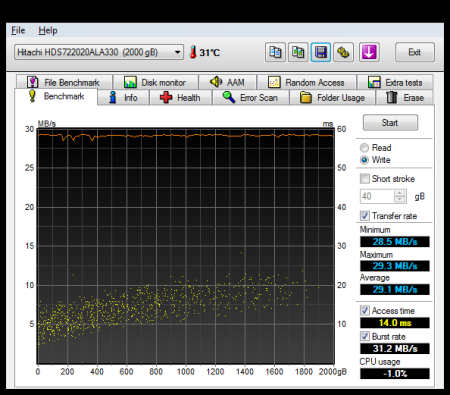 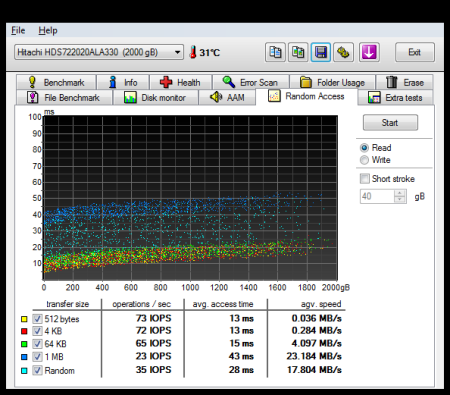 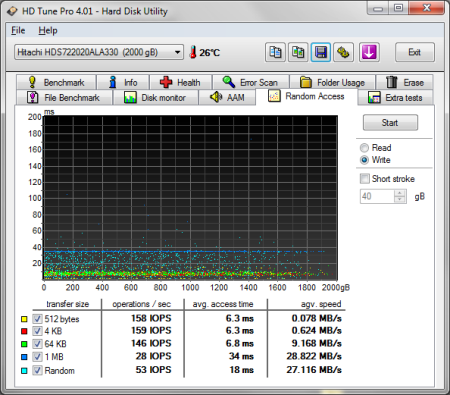 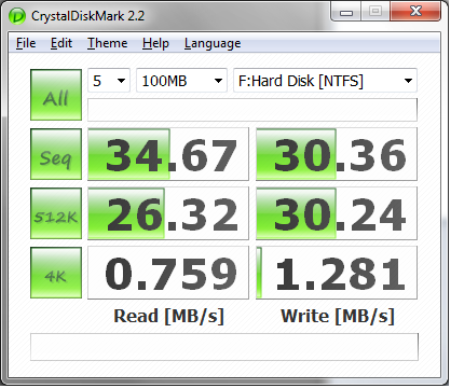 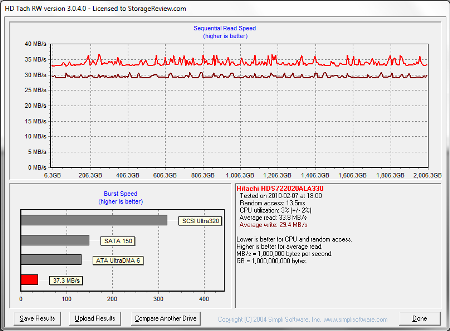 Our file transfer test consists of transferring a folder filled with nearly 30GB (9,055 files in 518 folders) of images, MP3 files, videos, and documents of various types from our test computer to the external hard drive.  We timed the transfer to the SimpleDrive at 20 minutes and 32 seconds. This is typical for USB 2.0; while ordinarily a 2TB drive would be backup-friendly, the USB 2.0 interface of the SimpleDrive makes it almost impractical to use for large backups.

The SimpleDrive 2.0TB requires an external power source to power the desktop drive inside. The included power adapter is a large wall plug unit about two-thirds the length of the SimpleDrive’s base and about one and a third times as thick. The adapter has the following specifications: 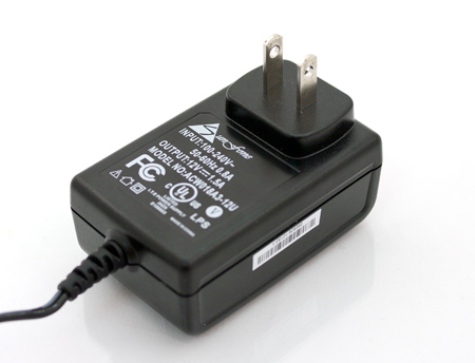 Aesthetically there is nothing stand-out about the adapter. We do not like how it is a large wall mount plug instead of a standard adapter because unless it is inserted into a lower socket it blocks the outlet below it. Additionally, when inserted into a power strip it blocks the plugs on either side of it.

To measure the power consumption of external AC-powered drives we use a Kill A Watt located in-between the drive and the wall. Idle power is measured when the drive has stabilized in the Windows environment and is not being accessed. Start-up is the maximum recorded wattage as the drive is spinning up. Random Access is recorded during the HDTune Pro Read Random Access benchmark. HDTune Write and Read Tests are recorded while running the sequential read/write tests inside HDTune Pro and noting the wattage consumed during the first stage before it starts the random access portion of the test.

The SimpleDrive comes with a small amount of software pre-loaded on the drive. The “Get Started” launcher on the drive brings up the following window: 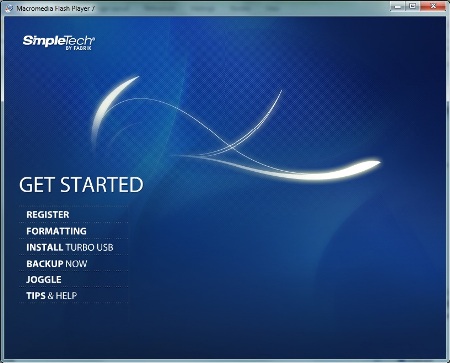 This window allows users to access help, format the drive, and most importantly, install the backup software advertised on the box.

The ArcSoft TotalMedia Backup & Record software application allows users to do the following:

In the scope of this review, we will briefly cover the data backup utility.

Selecting the Advanced backup option, which allows users to specify files/folders, brings up the following window: 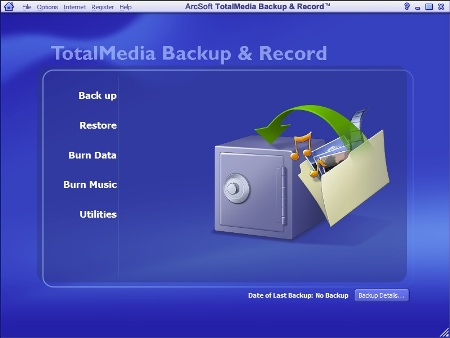 Checking the boxes next to any folder will select them for backup. Once users have selected the specific files/folders they want backed up, the following window: 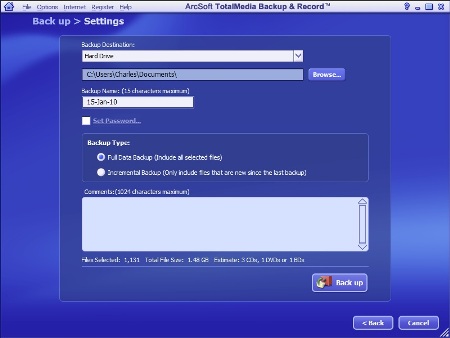 We like how the backup can be password protected; this is especially useful if using an external drive for backups. A status bar is displayed at the bottom of the window after the backup button is clicked:

The backup is stored in the user-specified folder. Backed up data is stored in .NBZ files; to restore the data, users must click on the “uQuickRestore.exe” in the folder, which launches the ArcSoft Restore Utility application. 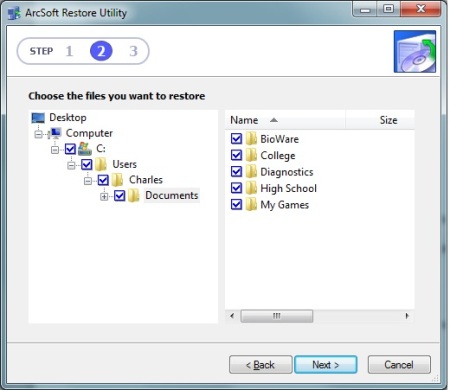 Once launched, the Restore Utility guides users through the restore process which is simple – users select the data they want restored, choose whether to restore it to original location or a different one, and click Restore.

The SimpleDrive 2.0TB comes with a three-year limited warranty, valid if the drive was purchased from an authorized Hitachi dealer for normal use. If users have trouble with the SimpleDrive, they must obtain an RMA and ship the drive at their expense using approved packaging to the specified repair center.

The warranty is longer than Western Digital’s one-year on its My Book Elements external hard drives and the same length as their higher-end My Book Elite series. However, Hitachi’s warranty is not as long as Seagate’s five-year on their FreeAgent series of external drives.

The Hitachi SimpleDrive 2.0TB has solid construction and gobs of capacity and gets the job done, if not spectacularly with the USB 2.0 limiting the Deskstar 7K2000’s full capabilities. USB 2.0 is limited to a 30MB/s transfer rate at best, which means large backups will be best done overnight.  The drive will work fine though to warehousing loads of digital files and even the USB 2.0 limitation won’t hamper the SimpleDrive from reliably streaming video. While we love the performance of the latest USB 3.0 external drives, few computers support that interface; so a solid USB 2.0 offering is still in demand.

Our biggest issue with the drive is the noise level; it has a high ambient “hum” from the platters spinning and the read/write clicks are too noticeable. We also have some concerns with the drive’s heat level after extended use periods and the large power adapter which takes up multiple outlets.

Bottom Line
While it’s loud and we have nits about the power supply and heat, the drive offers consumers a ton of storage space in a durable easy-to-use package that’s semi-portable. If you want a large external storage option that can be moved around and doesn’t have to live on your desk, the latest generation Hitachi SimpleDrive is worth considering.
Availability
The 500GB (LS-0500-US), 1TB ( LS-1000-US) and 2TB (LS-2000-US) Hitachi SimpleDrive Rev 3 are available now for a suggested $99.99, $129.99 and $249.99 respectively.
Discuss This Review
0 comment
0
FacebookTwitterPinterestEmail