Western Digital is the first of the hard drive manufacturers to embrace SSD technology. Their new SiliconEdge Blue SSD is a mainstream SSD available in 64GB, 128GB and 256GB capacities, and claim 250MB/s sequential read and 170MB/s write speeds.

Western Digital is the first of the hard drive manufacturers to embrace SSD technology. Their new SiliconEdge Blue SSD is a mainstream SSD available in 64GB, 128GB and 256GB capacities, and claim 250MB/s sequential read and 170MB/s write speeds.

The Western Digital SiliconEdge Blue SSD has a durable stainless steel exterior shell with an attractive clear-coat covering its brushed metal finish. Even though most people don’t intend to drop the drive itself or carry it outside of a computer, it looks durable enough to take the abuse being tossed around while still maintaining a clean appearance.

We noticed some minor blemishes out of the sealed baggie in our Blue’s clear-coat but it was not visible unless you were closely inspecting it. The shell looks user-serviceable – made up of two overlapping covers which are held together with Phillips-head screws – compared to some cases which are either glued together or held shut with plastic snaps. With proper cable management I can’t think of any reason why the drive couldn’t be shown off as a center-piece inside your computer… it looks that nice.

No cables or accessories were included with our SiliconEdge Blue SSD review package. If you intend to mount this inside a desktop computer or other device that takes a 3.5" hard drive you will need to purchase commonly available 2.5" to 3.5" adapter rails.

Our review model didn’t have any warranty void if removed stickers preventing us from taking a peak inside but given the cost and generous warranty we don’t recommend the end-user disassembles the drive. Our pictures of the inside top and bottom should cure your curiosity anyway.

The internals are comprised of two stamped and tightly fitting stainless steel shells held firmly together with machined Phillips-head screws. With the top cover removed we see the heart of the drive is attached to the lower cover with four additional Phillips-head screws.

The board includes a custom Western Digital branded memory controller (they are very tight-lipped about who made it), a 64MB DDR2 RAM chip (updated, originally said 32MB), and 32 double-stacked Samsung k9mdg08u5m MLC flash modules. The drive has an advertised capacity of 256GB and user-available capacity of 238GB; roughly 18GB is reserved for internal use and wear leveling.

To measure the raw read and write speed of the SiliconEdge Blue SSD we used IOMeter to measure the speed in different scenarios. For reference Western Digital claims a max speed of 250MB/s read and 170MB/s write. To give a better impression of real-world performance the drive was heavily used over several days – filling it up entirely more than a few times – to simulate what might happen after the drive fills up from a few weeks of use. Unlike standard hard disk drives, flash storage takes a slight performance hit over time. Features like TRIM help to alleviate this and restore as much of a "like-new" condition as possible. 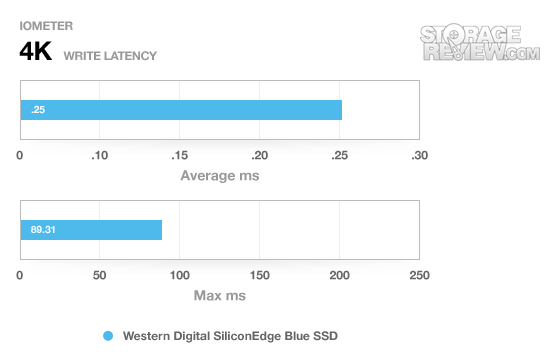 The drive performed 22MB/s slower on read compared to the factory claims but on write speed it actually performed almost 6MB/s faster than listed. 4K random I/O performance averaged a good measure under the listed spec of 5000 for read and 5000 for write. No abnormal slowdown was found in the average write latency or max latency. 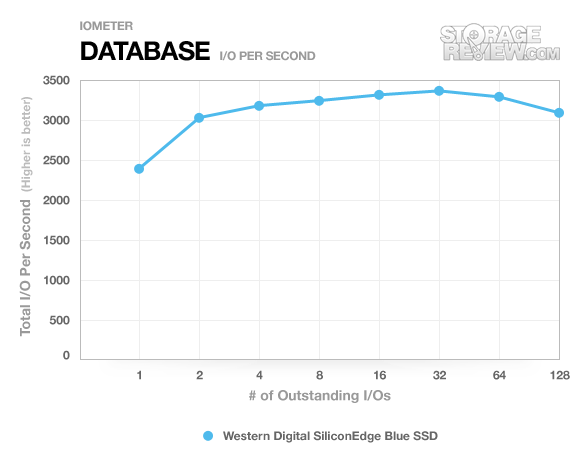 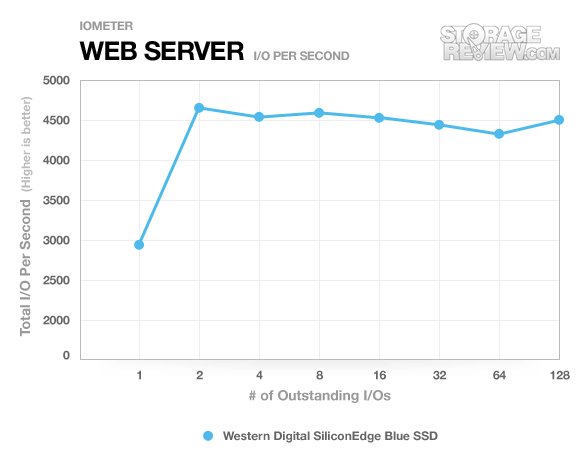 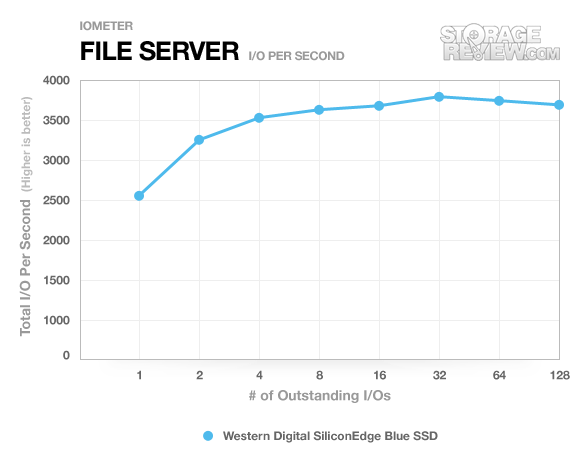 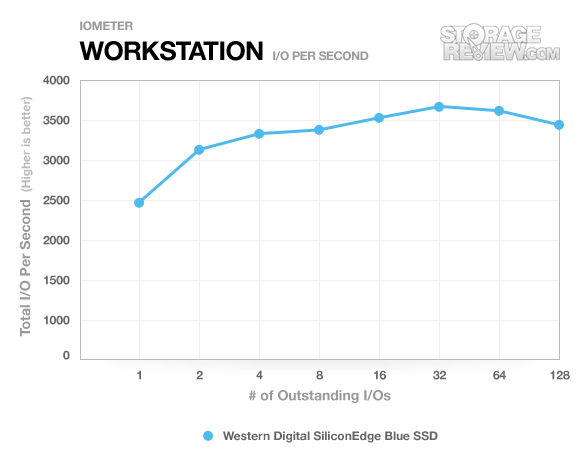 One of the unique features Western Digital talked about with this new SSD is its internal TRIM support. Unlike normal garbage collection which requires support from the operating system or an outside utility, the SiliconEdge Blue can process this in the background on its own. For users still running Windows XP or Vista this means you get many of the benefits of TRIM which is native to Windows 7.

Depending on the situation we found this internal garbage collection to be problematic at times if there was heavy random write access taking place. Running synthetic benchmarks such as HDTune or HDTach which spread out write activity over the entire drive surface could activate this as well as very large file transfers which span thousands of files.

In our file copy test where we move a folder containing 9,055 files totaling 29.2GB we saw worst case and best case times. At worst the drive needs 14 minutes and 49 seconds but at full speed only requires 6 minutes and 4 seconds. We spoke with Western Digital about this issue they noted they were able to replicate some of the problems we were seeing and were going to work on finding a fix. We will update this review if a firmware patch is released.

Until the TRIM activity stopped, the overall write performance of the SSD was slower than anything we had experienced to date.

Compared to their spinning counterparts SSDs have a huge advantage when it comes to power consumption. When your computer is sitting idle with no disk activity a SSD will be sipping power conservatively while a hard disk still has to draw power to spin a platter at a few thousand RPM. For desktop users this isn’t a huge concern with a few watts of energy savings unless you are SUPER-green but for a mobile user this could mean a couple of hours of battery life. We saw the following results in our power tests under specific drive conditions:

One additional power measurement we include with SSDs that support TRIM is the idle power consumption while the drive is working internally to move data around. Even if your computer is sitting perfectly idle in this situation the SSD is still consuming quite a bit of power to clean things up. In some cases this activity can go on for 20-30 minutes before returning to true idle. Outside of long sequential write activity the highest usage of power came from TRIM activity running in the background.

In both desktop and notebook environments power dissipation always translates into how hot an item will get. During our extensive testing the Western Digital SiliconEdge Blue peaked at 103F measured from the top cover after going through 10-15 minutes of random write activity and 30 minutes of followup TRIM activity in a static air environment.

Western Digital includes an impressive three-year warranty with the SiliconEdge Blue SSD which is one of the longest in the industry. Even though this drive will probably outlast the desktop or notebook it is installed in, a long warranty is always reassuring when the price tag on the product is high. The SSD itself has a rated 5-year lifespan in a scenario where 42.1GB of data is written to the drive daily. Even if you are downloading multiple new HD-movies per day your computer will probably fail before this drive will.

For its first SSD Western Digital seems to have taken a calm and steady attitude with the SiliconeEdge Blue. It is not the fastest mainstream SSD on the market right now… but it is probably one of the most extensively tested for compatibility and reliability.

For users who are concerned about the longevity of their SSD the Western Digital SiliconEdge Blue offers a lengthy 3-year warranty and they even come out and give the drive a 5-year lifespan if you happen to write 42GB of data to the drive every single day. For most users this means the drive should stay operational well past the useful life of the computer it is installed in.

If you are looking for the fastest drive on the market or best price per GB the SiliconEdge Blue is middle of the pack on speed and one of the more pricey. Overall it was good to see at least one hard disk drive maker come to terms with reality and finally releasing a flash-based drive. All I can say is if Western Digital follows their standard naming scheme (green = eco-friendly, blue = mainstream, black = performance) I can’t wait to see the SiliconEdge Black SSD.

If you want a reliable SSD that will probably outlast your computer, look no further than the Western Digital SiliconEdge Blue.