With 7mm ultra-thin hard drives all the rage, Hitachi aims to blast one out of the park with its new 500GB single-platter Z5K500 – that’s right, 500GB on a single platter. Getting to this higher capacity in such a slim package has been a big deal for drive manufactures, since in the 7mm drive space you are limited to a single drive platter, instead of two in a 9.5mm drive or three in a 12.5mm drive. While capacity might be the biggest selling point of this drive, it is also important to see how well it does in the performance category, which we dive into in this review.

With 7mm ultra-thin hard drives all the rage, Hitachi aims to blast one out of the park with its new 500GB single-platter Z5K500 – that’s right, 500GB on a single platter. Getting to this higher capacity in such a slim package has been a big deal for drive manufactures, since in the 7mm drive space you are limited to a single drive platter, instead of two in a 9.5mm drive or three in a 12.5mm drive. While capacity might be the biggest selling point of this drive, it is also important to see how well it does in the performance category, which we dive into in this review.

Let’s talk about some benefits of having a single-platter hard drive. First of all, there is less power consumption; the motor only has to spin one platter around. Combined with their thinness, this makes 7mm drives very attractive for use in ultraportable notebooks such as the Lenovo ThinkPad X series. Additionally, the 7mm drives produce less noise on average since there are less moving parts. And last but not least, 7mm drives also weigh a tad bit less than a standard 9.5mm drive.

Aside from its monster 500GB single platter design and 7mm z-height, the Z5K500 has little in the way of uniqueness. It does use the new 4K Advanced Format, which increases the age-old 512b sector size by a factor of eight; theoretically this improves performance and reliability by a small amount (though in our testing, the difference is quite small). Rounding out the specifications, the Z5K500 has a standard 5400RPM spindle speed and an unremarkable 8MB cache. The Z5K500 is also available in 250GB and 320GB versions (HTS545032A7E380 and HTS545025A7E380, respectively). 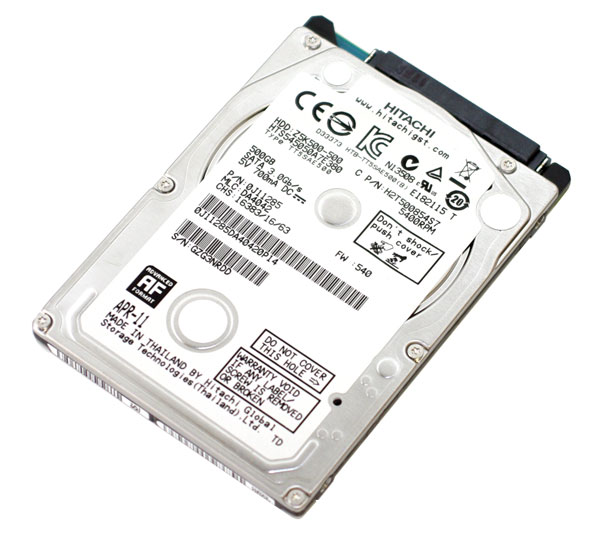 The Hitachi Travelstar Z5K500 looks like any other 2.5-inch hard drive – put on a successful diet. Compared to the standard 9.5mm height, the 7mm size is barely taller than the mounting screw holes on the sides of the case.

The top cover follows the same design scheme as other Hitachi hard drives, with a white sticker with black text covering most of the top. This label includes the drive and part number, shipping firmware revision, and other drive specifics. 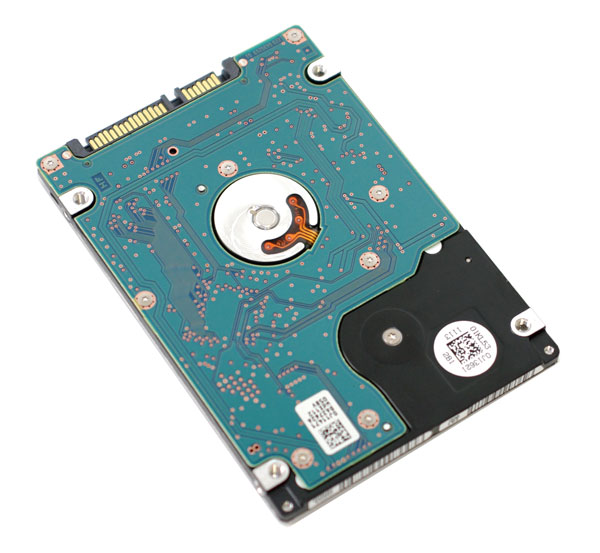 The Hitachi Z5K500 is held together with eight T-4 Torx screws. Once these screws are removed, the PCB easily lifts off the drive body exposing all of the hidden components on the other side of the circuit board. 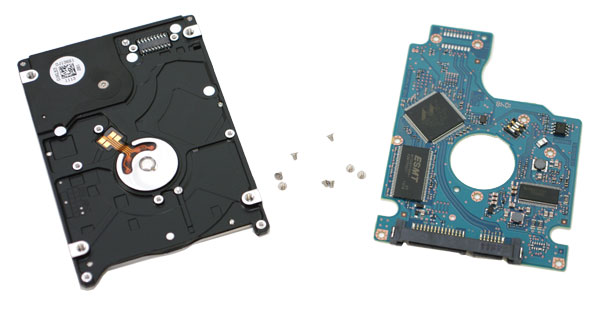 At the heart of the Z5K500 is a Marvell 88i9105-TLA2 controller, which was also found on the Z5K320 we previously reviewed. This drive also includes the same 8MB of cache. 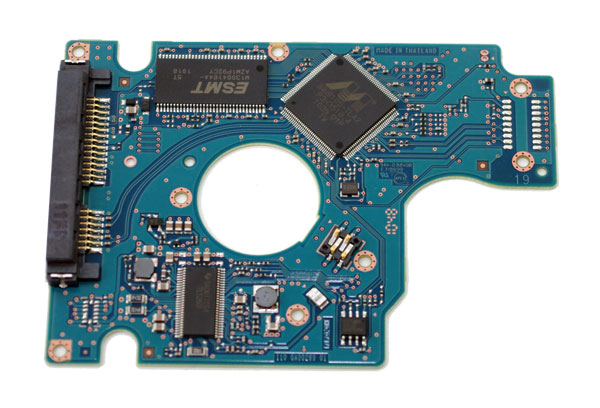 Synthetic benchmarks are predictors of real-world performance. Many of the benchmarks we run prey on a certain characteristic of the drive; for example, this first IOMETER 2MB sequential transfer benchmark usually favors drives with a high platter density. 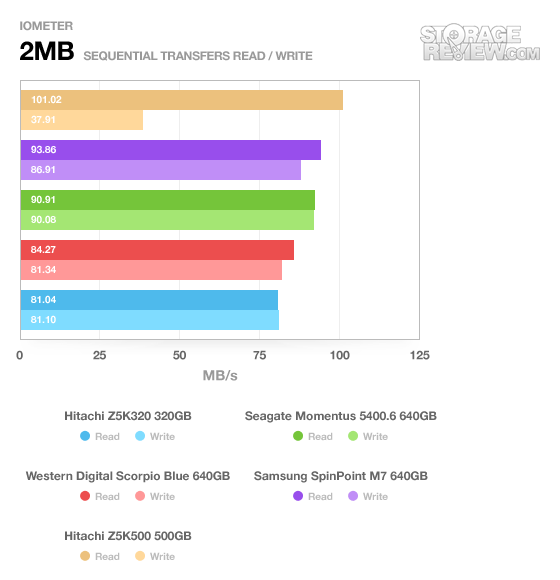 With the exception of the Z5K320, which is related to the Z5K500, all of the drives competing with the Z5K500 are two-platter mainstream 9.5mm height drives.

Off the bat we can see the Z5K500 is having inconsistent performance. It led the pack on read speeds but fell flat on its face for writes; it’s only 40% as fast as the leading Samsung SpinPoint M7 640GB and about half as fast as the others. 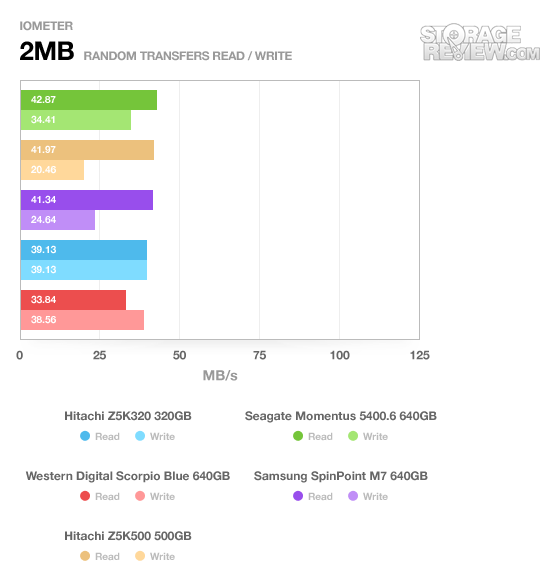 In the random transfer benchmark, the Z5K500 is having similar issues; it does fine on the read speeds but gets murdered in the writes. For the record, the Samsung drive is doing almost as bad here, which is somewhat surprising given it did well in the sequential benchmark. 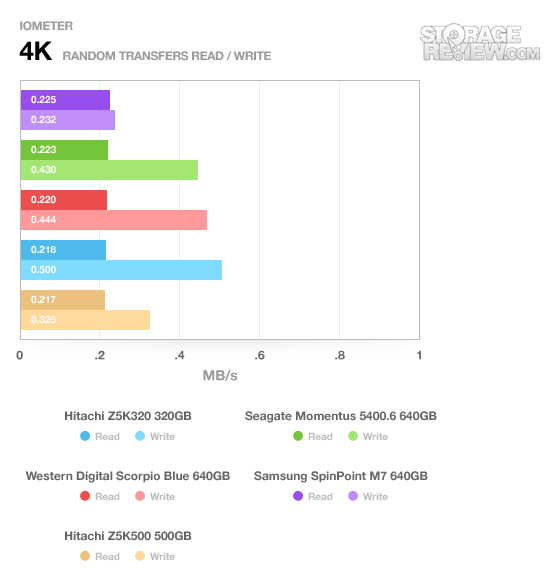 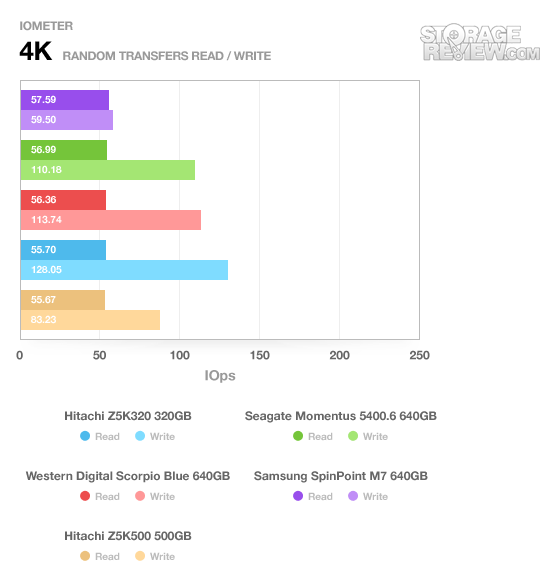 This benchmark switches to a smaller file size. We are starting to see a pattern; the Z5K500 does just fine in reads but is only about 75% as fast as the next-fastest drive. The Samsung does positively awful here; it has only gotten worse. 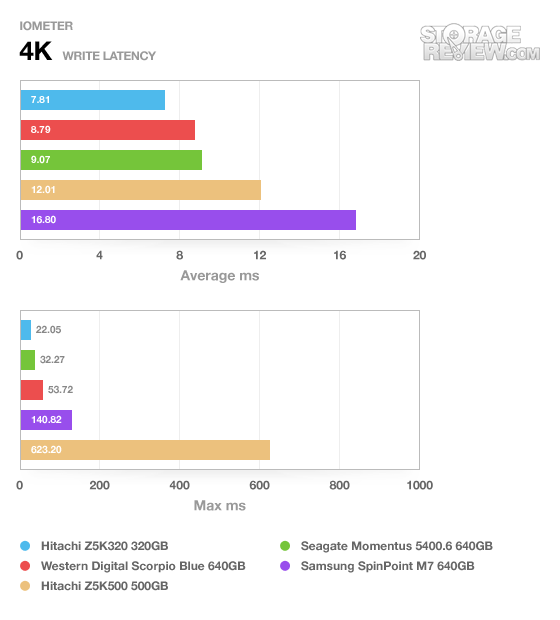 Write latency is a good indicator of a drive’s responsiveness. The Z5K500 does not look good, placing at the back of the line ahead of the pathetic Samsung. The max write latency is astronomical on the Z5K500 however, the highest we have ever seen. Wow. 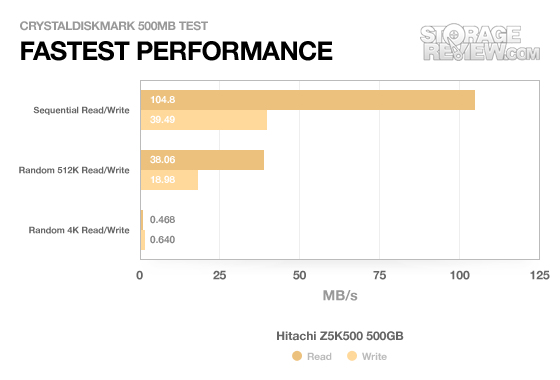 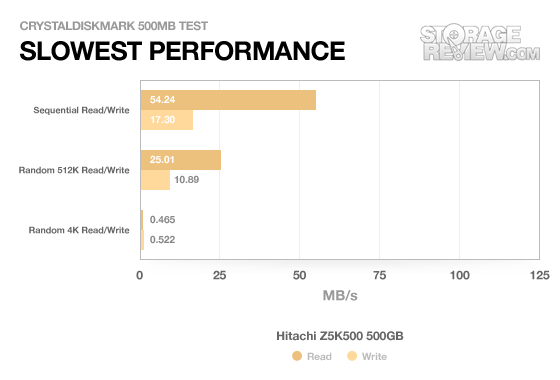 CrystalDiskMark repeats the pattern we have been seeing since the first benchmark – there is something just not good with the Z5K500’s write operations. The write performance is dreadful. The most puzzling part is that its brother, the Z5K320, is keeping up just fine. 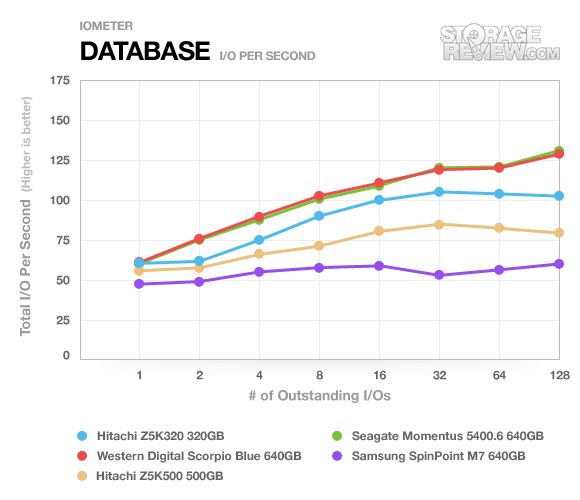 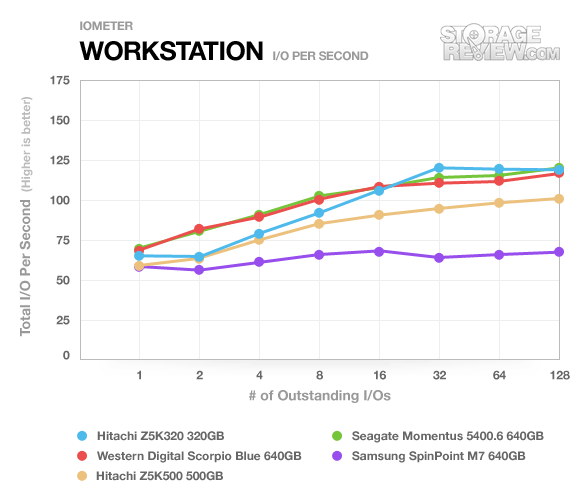 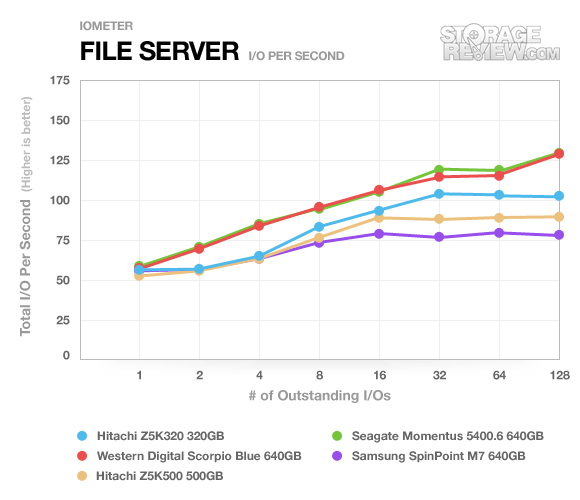 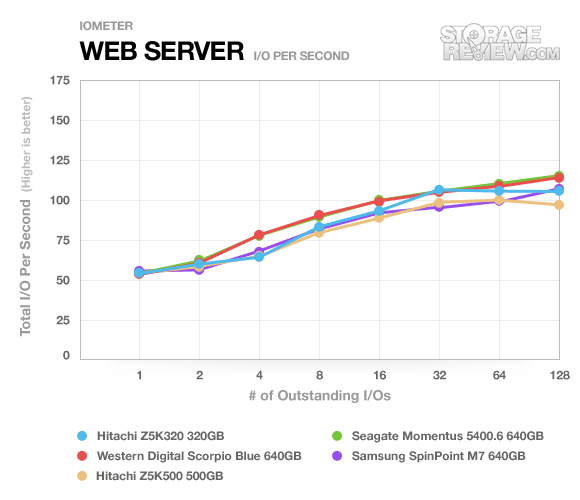 Our last set of benchmarks put the drives through a server-style load, increasing the queue depth from 1 to 128. Normal drives show an increase in performance from left to right. For once we are actually looking at some normal graphs; the Z5K500 is not putting up a great showing and is still beat by its little brother, however. That said, we will let our real-world custom benchmarks tell the true story.

Our next real-life test covers disk activity in a gaming environment – 6% write and 94% read. The test consists of a Windows 7 Ultimate 64-bit system pre-configured with Steam, with Grand Theft Auto 4, Left 4 Dead 2, and Mass Effect 2 already downloaded and installed. The trace captures the heavy read activity of each game loading from the start, as well as textures as the game progresses. In this trace we recorded 426MB being written to the drive and 7,235MB being read. 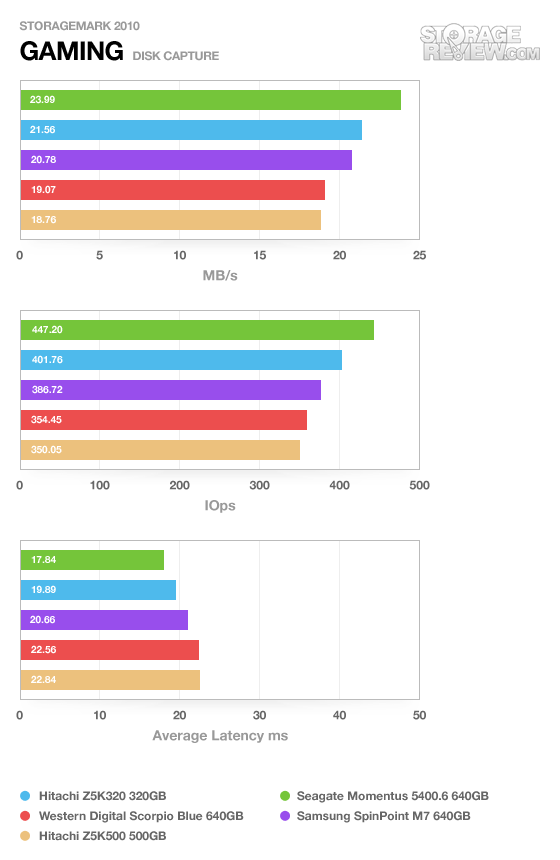 This test focuses on read performance to the Z5K500 does OK, but nothing more. The real-world benchmarks reflect the Z5K500’s high average latency like the synthetic benchmarks did. A high average write latency is always a bad thing.

The Z5K500 has low power consumption for a 2.5-inch drive, there’s no doubt about that. It is not that much lower than that of a two-platter 5400RPM drive, however. Compared to the Western Digital Scorpio Blue 750GB, it is more or less the same except for write speeds. So in reality, we have not seen much of an advantage to the single-platter design in this review save for the fact that it is physically thin. 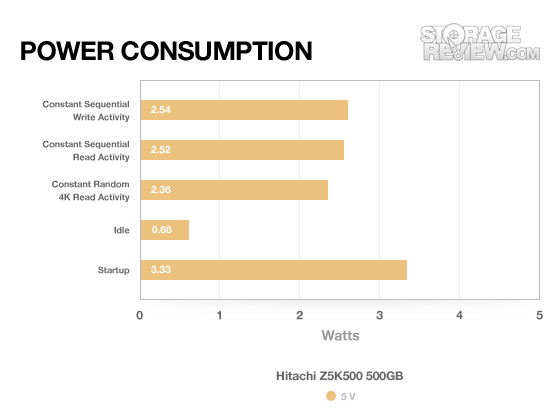 The Travelstar Z5K500 is backed by an industry-standard three-year limited warranty.

The Hitachi Travelstar Z5K500 is more impressive on paper than in real life. Its sole selling point is at 500GB, it is the highest-capacity 7mm height drive available today. This is great news for ultraportable computer users and manufacturers alike; previously the largest capacity thin hard drive was 320GB.

The Z5K500 suffers considerably when it comes to performance, however; its read performance is middle of the pack but its write performance is downright awful. Furthermore it has a high average write latency, which hurts performance across the board.

That said, the Z5K500 is still recommendable given its 500GB of storage space. For ultraportable notebooks that can only take 7mm drives, this is as good as it gets.