Recently, Dell EMC released an updated version of their Cloud Tiering Appliance, or CTA. Some of our readers may already be using this completely free virtual software appliance from Dell EMC, some may know about it but haven’t utilized it, and some may ask “what’s a CTA?” Allow us to explain.

Recently, Dell EMC released an updated version of their Cloud Tiering Appliance, or CTA. Some of our readers may already be using this completely free virtual software appliance from Dell EMC, some may know about it but haven’t utilized it, and some may ask “what’s a CTA?” Allow us to explain.

The right-to-use license for CTA is included with every Dell EMC Unity XT array as part of its all-inclusive software model. The software comes packaged as a hardened SUSE appliance, in an .ova format which you can download free, no additional licensing required, from Dell EMC here, Dell account required).

Once this virtual appliance is deployed and configured (either as a standalone appliance or an HA configuration of multiple appliances) in an environment, it allows administrators to archive Unity XT block storage and tier Unity XT file storage out to several different cloud providers’ storage offerings. This can be done automatically using Policies and Schedules, an API call to the CTA’s REST interface, or manually through the CTA’s new HTML5 GUI.

Additionally, CTA can be used to restore file or block data from cloud storage to an on premises, primary storage Unity XT array in a retrieval process known as recall for file and restore for block. And finally, CTA can be used to migrate file repositories between older storage arrays and a Unity array, as well as between cloud providers (Fig 1.). Currently the CTA integrates with the following cloud storage providers: Dell EMC Elastic Cloud Services (ECS), IBM Cloud Object Storage, Microsoft Azure, and AWS S3.

When archiving block storage, the CTA operates as a policy engine, interfacing with the Unity XT array and identifying block snapshots that are assigned specific criteria which the CTA administrator defines (the Policies or Schedules mentioned above). Those snapshots are then archived to cloud storage (again, as defined in Policies and Schedules), and once the transfer finishes, the snapshot on the Unity XT array can be erased, reclaiming valuable storage capacity for your on-premises operations. To restore block data from the cloud through CTA, an administrator can utilize a target of block storage on the source array, or block storage on a new Unity XT array in any location.

For file tiering, CTA again acts as a policy engine, connecting to a Unity XT array and ascertaining which Policies and Schedules apply to which files. When those files are identified, the CTA creates a stub in the original location, and tiers the file to cloud storage. When a stub is read, the CTA will either recall the file to the local array or pass IO through to the file located in the cloud. For clients and end users, this process delivers a seamless experience, regardless of the origination of the file. The real benefit here is that the stub that CTA creates utilizes only 8KB of disk, versus the entire consumed capacity of the file itself that would exist. This is another great way to reclaim consumed capacity on the Unity XT array and utilize it for your more latency sensitive applications and operations that require storage in the data center.

It’s the CTA’s ability to migrate files from older arrays (identified above) to Unity XT arrays and between clouds that really caught our eye. If a storage administrator can use the CTA as a migration tool for files (and even CTA file stubs from VNX systems) from old hardware to new, that will save CapEx on a migration tool, and if an organization can choose their cloud storage provider easily based on cost of storage, that’s a serious boon to OpEx.

There’s two additional ways we see the CTA benefiting customers who utilize it. The first is through saving space on cloud storage utilizing the CTA’s built in compression. When moving data to the cloud, administrators can choose between fast or strong compression, and can monitor compression rates through the Tiered Usage Chart located on the Dashboard page of the CTA GUI (Fig 2). The second is through backup cost savings. By reducing the amount of actual on-premises data that needs written off to other local media, CTA can help save spending on on-prem backup hardware and software. However, based on SLAs with your cloud storage provider, we would still highly suggest backing up any existing data on cloud storage to ensure that you can meet your organizational SLAs as required. 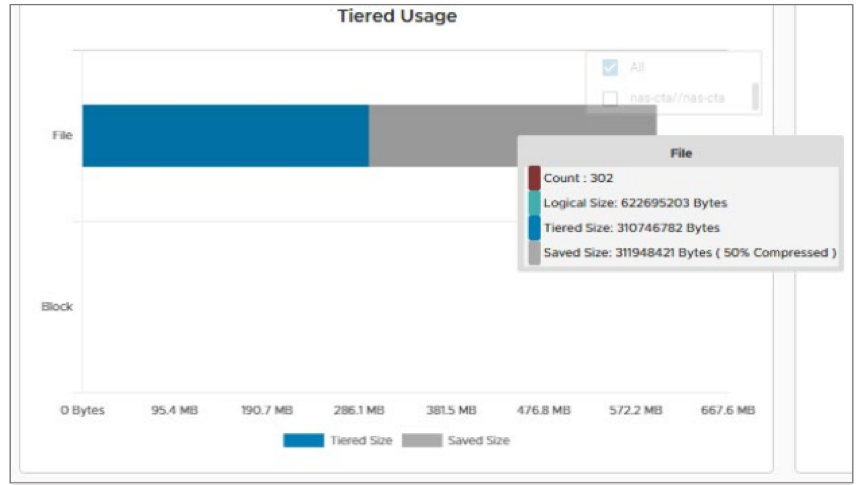 We have to give credit to Dell EMC. Not only do they have a nice new, upgraded appliance, they have rolled out several new features to go with it. The new HTML 5 interface is crisp and responsive (goodbye Flash!), and Dell EMC has done an excellent job with UI design, giving the CTA GUI an identical feel to a Unity XT, PowerStore or PowerMax GUI. It’s always easier to operate when the interfaces that engineers and administrators utilize feel seamless.

As far as security updates go, there is now added support for SMB 3.0.2 as well as SMB 2.1, including SMB auto-negotiation, signing, Kerberos and NTLM authentication. Additionally, performance improvements have been implemented for large files, with Dell EMC optimized R/W packet length to 512Kb.

Security is something to take seriously, and we’re pleased that the Encryption option for the CTA requires an HA deployment (Fig. 3). Having a single point of failure key store in a security architecture that could potentially result in a loss of data if it failed, a serious risk, and Dell EMC makes sure you avoid it by requiring multiple CTAs. That’s a good thing. They’re keeping end users from doing bad things to themselves. We’d like to see more vendors adopt common-sense guard rails in their products. 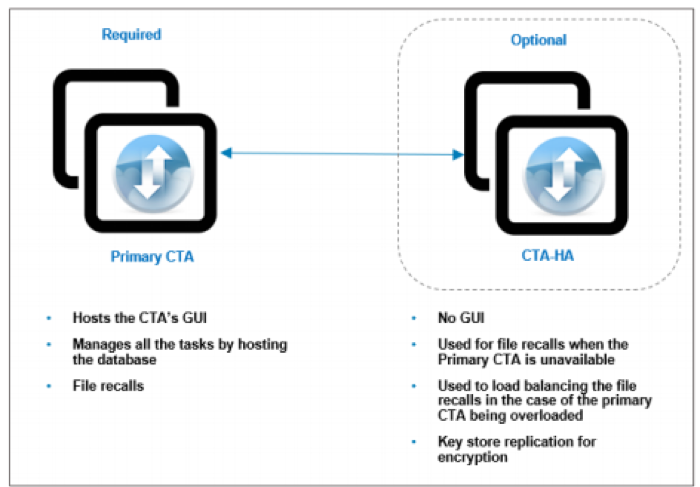 Now that we’ve covered the high-level overview, let’s dig into the CTA to give you a more in-depth experience.

There is a small amount of guided CLI (Fig. 4) during the initial setup. However, it’s not onerous, consisting mainly of time zone, networking, and setting the password. From deploying the. ova to logging into the GUI, this process took us approximately 5 minutes.

For those who prefer a more conversational walkthrough, we have a video:

Once we’ve finished the CLI setup, it’s time to log into the GUI interface (Fig. 5). Again, we’d like to praise Dell EMC for the new clean UI design. 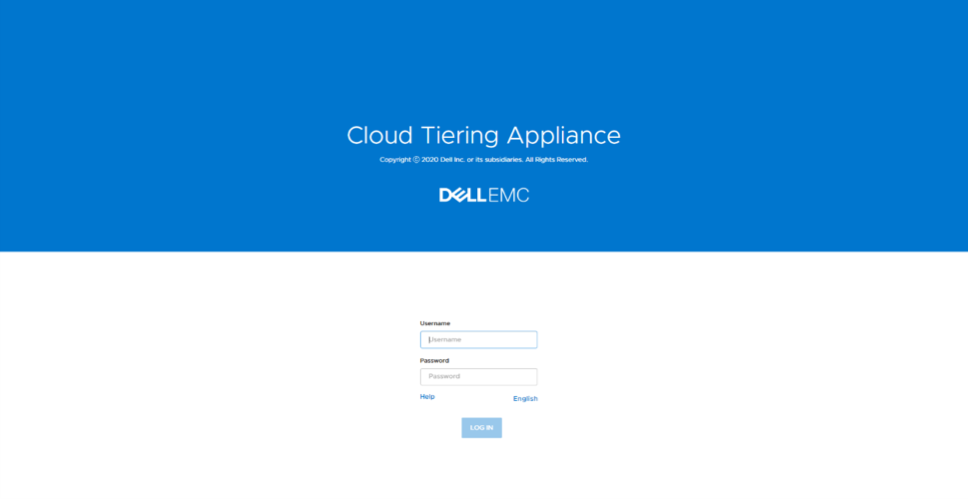 Once logged in, the default Dashboard page appears (Fig. 6). 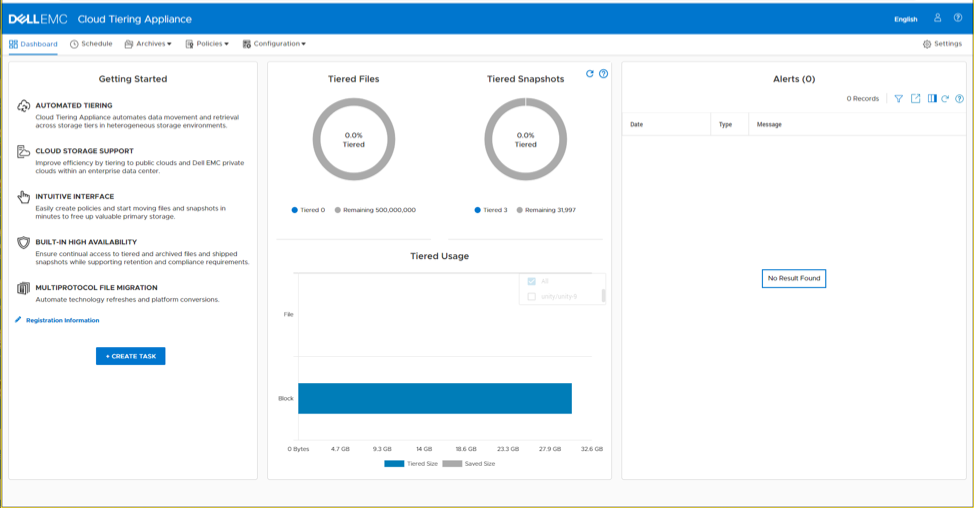 The Dashboard shows total amount of Tiered Files and Snapshots that have been moved to cloud storage, any Alerts that have occurred, and the Task Wizard.

The Create a Task Wizard is a welcome upgrade to the prior version available on the CTA. In the newest version, a quick walkthrough of the wizard appears as the following:  select task type > select server > add ip > policy (or create policy) > schedule (or create schedule) > summary confirmation (Figs. 7-14). 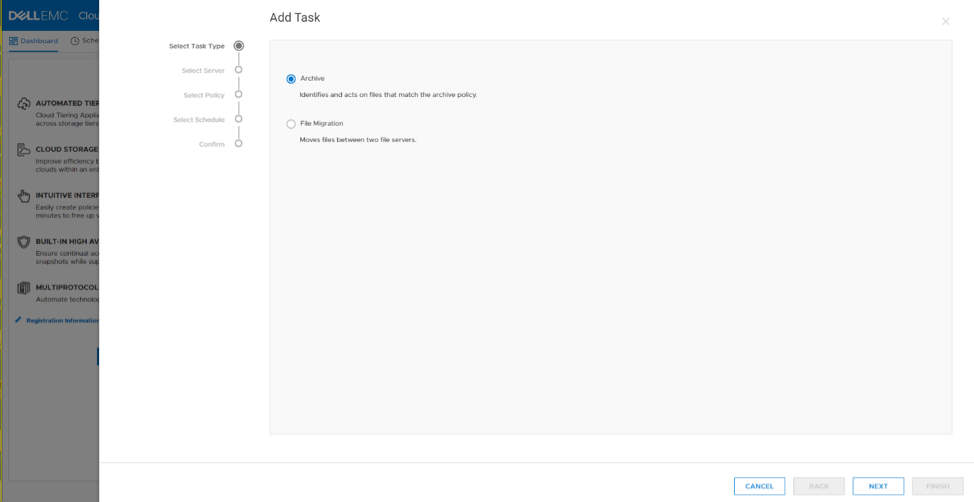 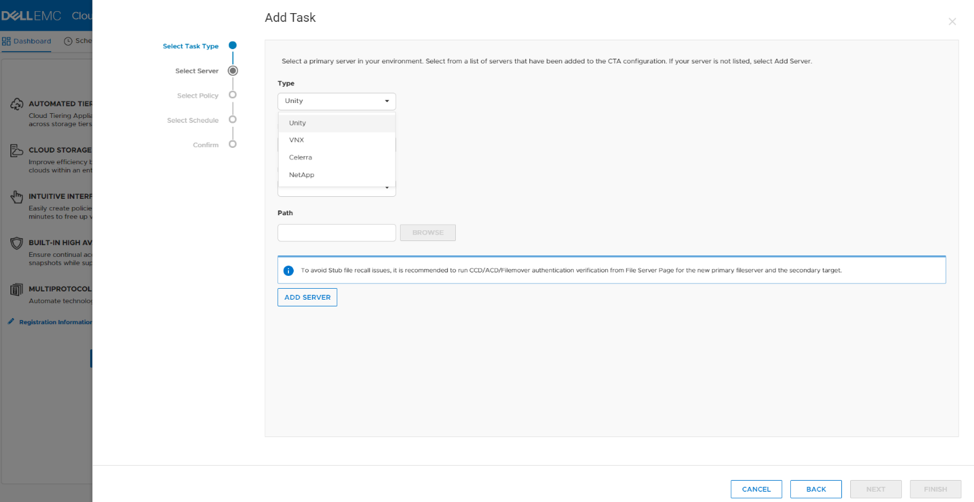 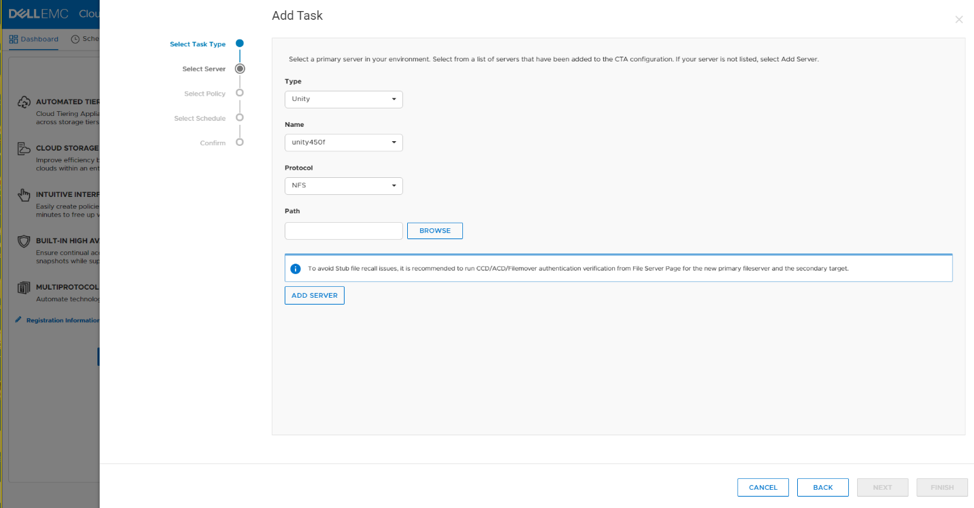 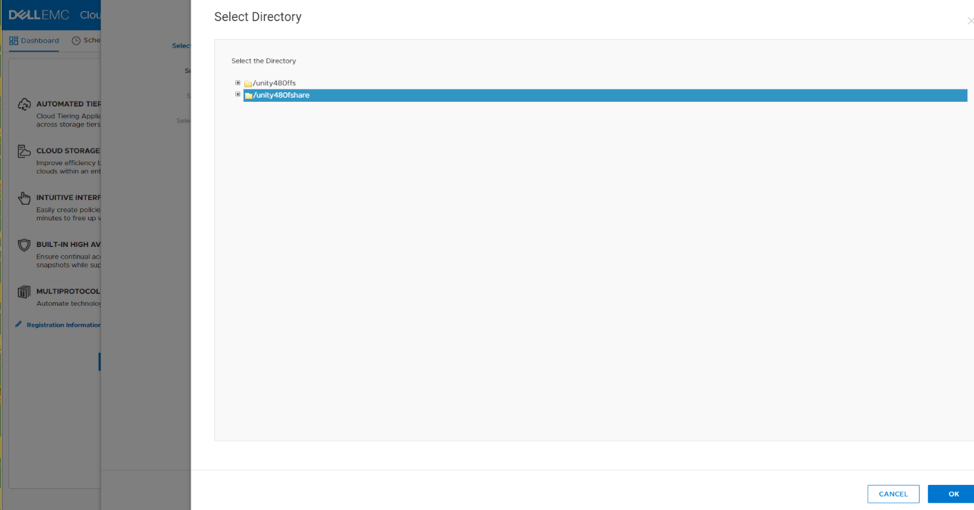 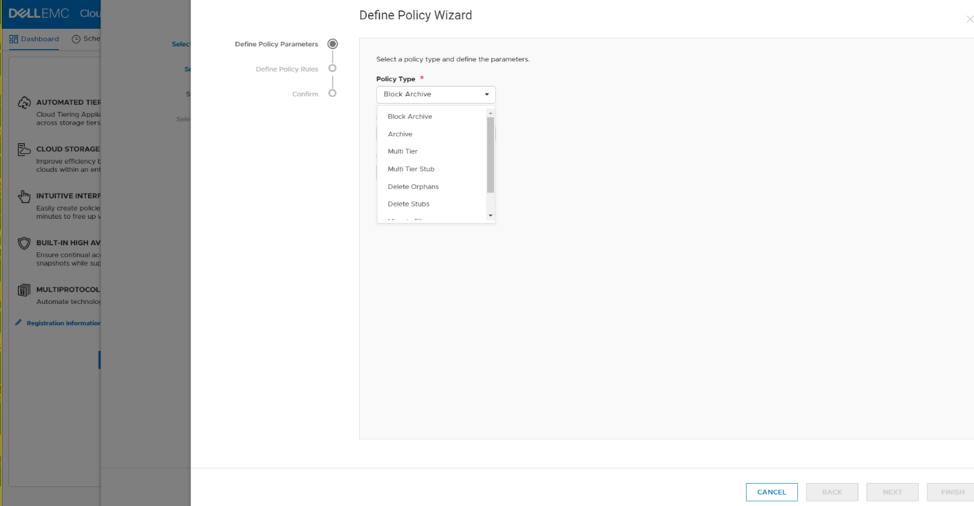 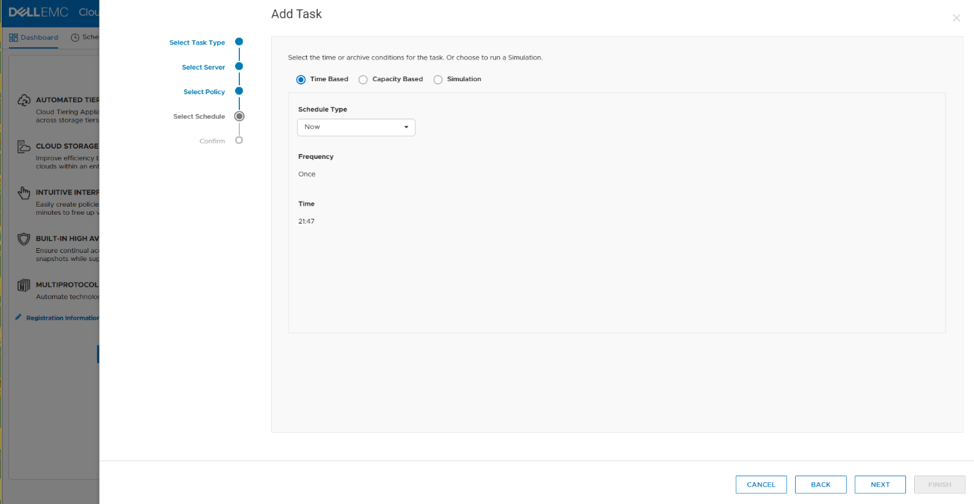 Under the Schedule selection from the top menu, you’re able to see all the schedules created, and if you select a specific schedule, you’re able to drill down into the History of that Scheduled Task (Fig. 15). 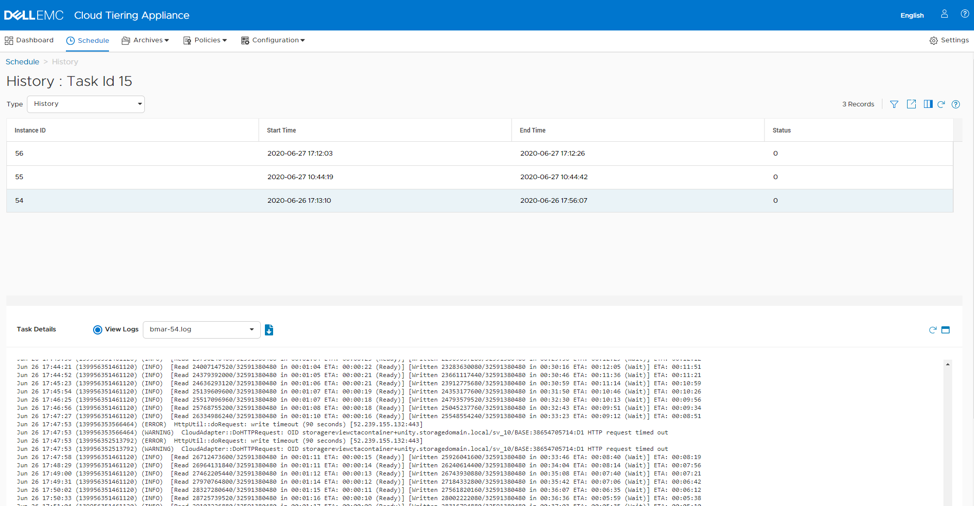 Another nice feature under Schedule, you can run a Schedule as a Simulation, to ensure that a job will finish correctly and won’t encounter errors after you create or change a Schedule (Fig. 16). 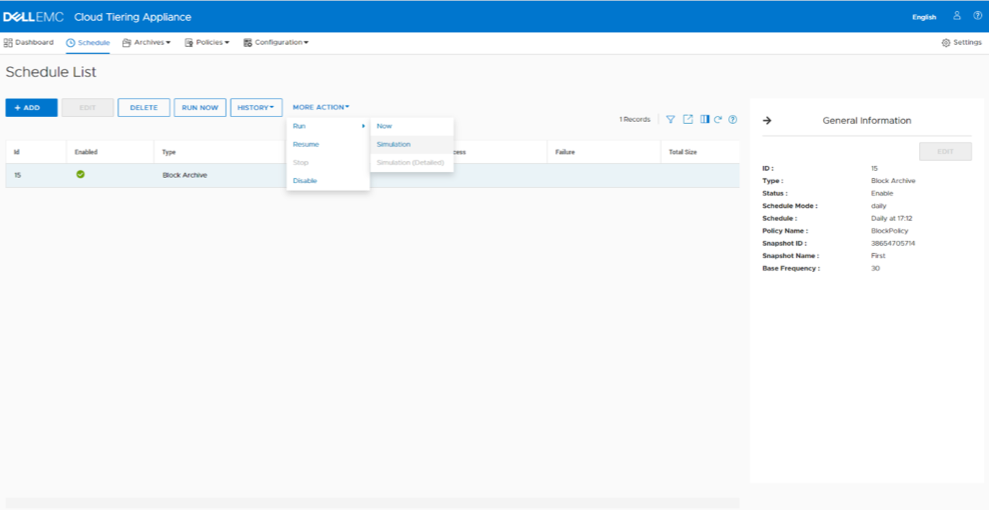 Moving on to the Archives tab of the menu, this screen shows you which LUNs and Consistency Groups are setup for archiving (Fig. 17). 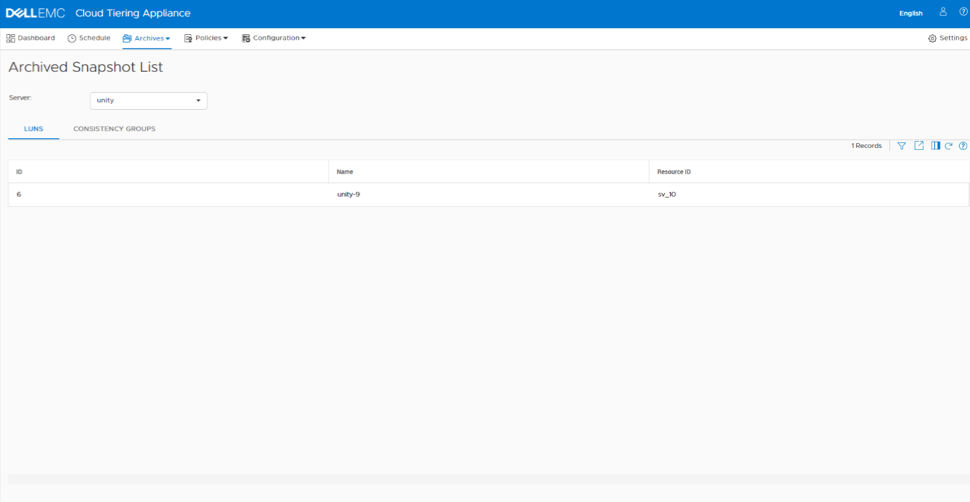 You can also see what files have been archived, review history of those files, the stub recovery and orphan deletion logs under the Archives menu (Fig. 18)

The CTA offers a good view of data in use as well via the view reports screen (Fig. 19).

Under the Policies menu, you’re able to view all Policies that have been created on the CTA, or create a new one (Fig. 21). 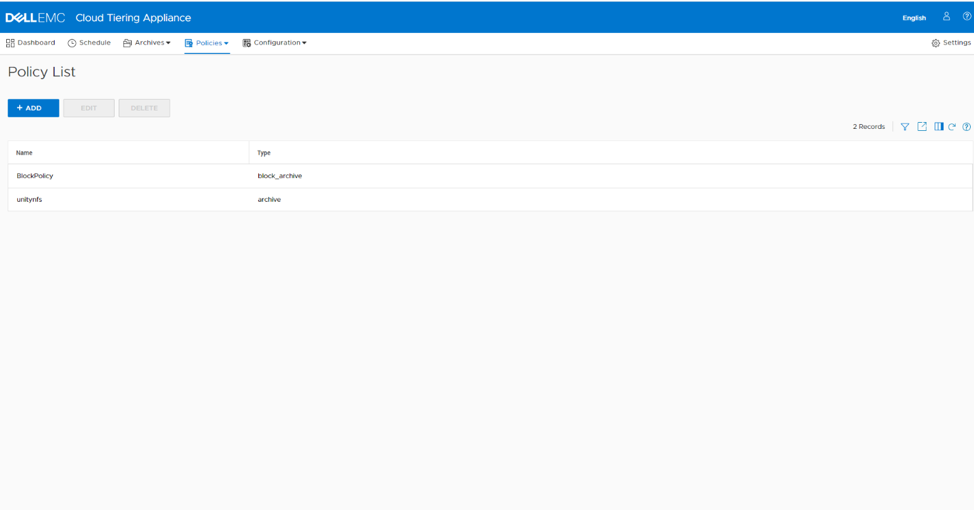 Note that on the Policies screen, when you choose a policy, a General Information pane will appear, offering more information about that particular policy (Fig. 22) 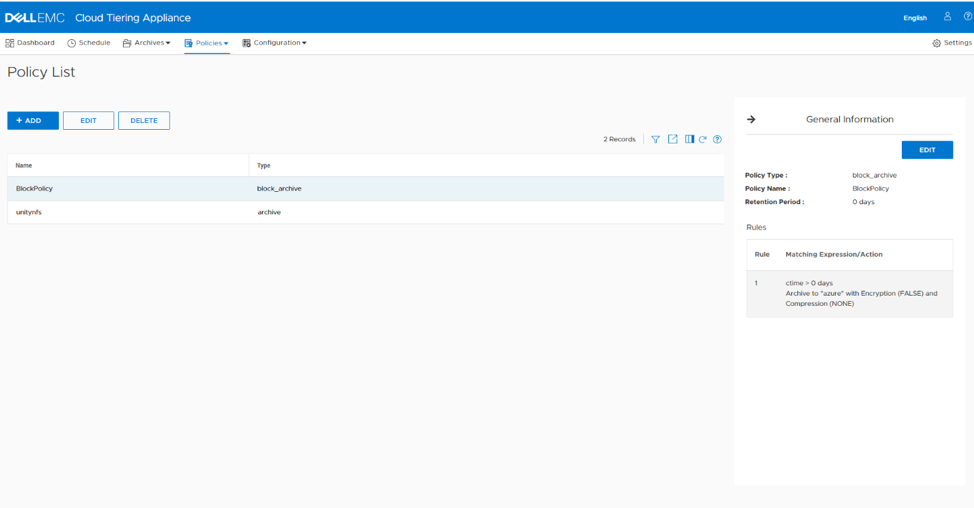 The final menu item available in the CTA GUI is the Configuration. It’s under here that you’ll find items such as encryption (Fig. 23) 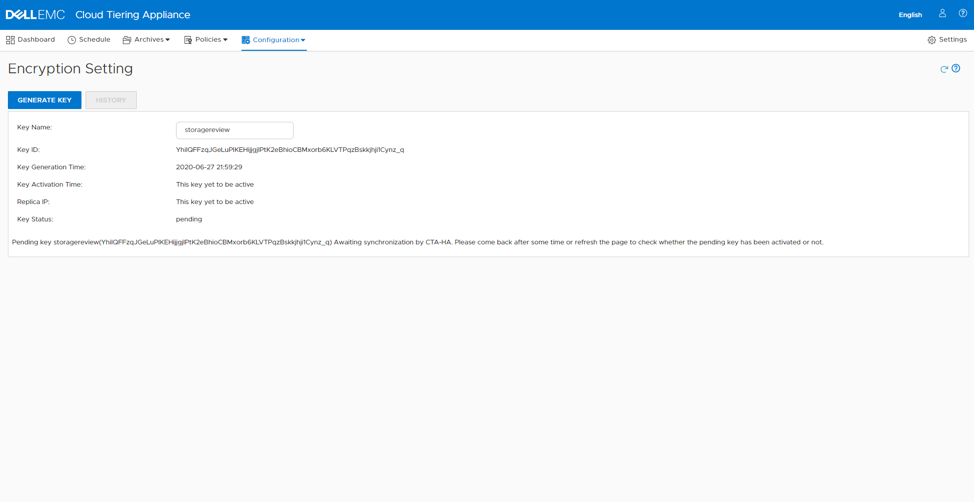 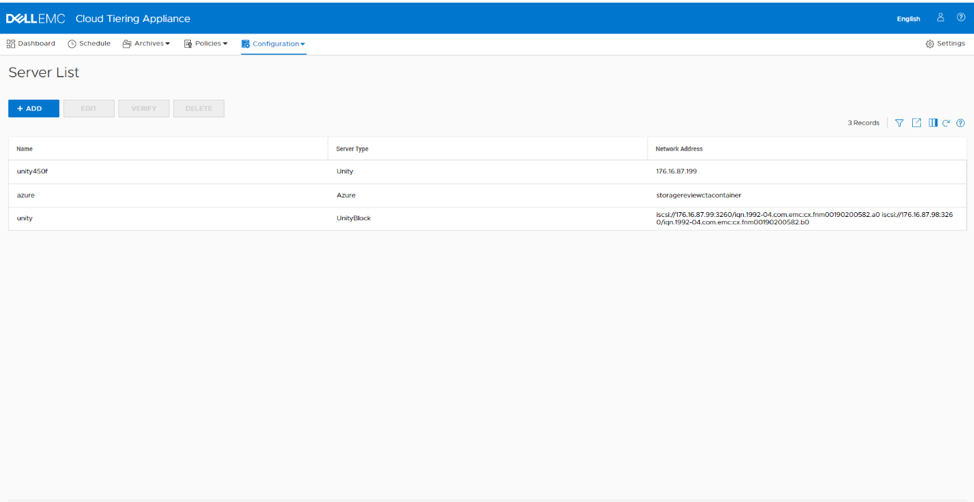 As well as common API settings including File Mover and Unity Credentials (Fig. 25). 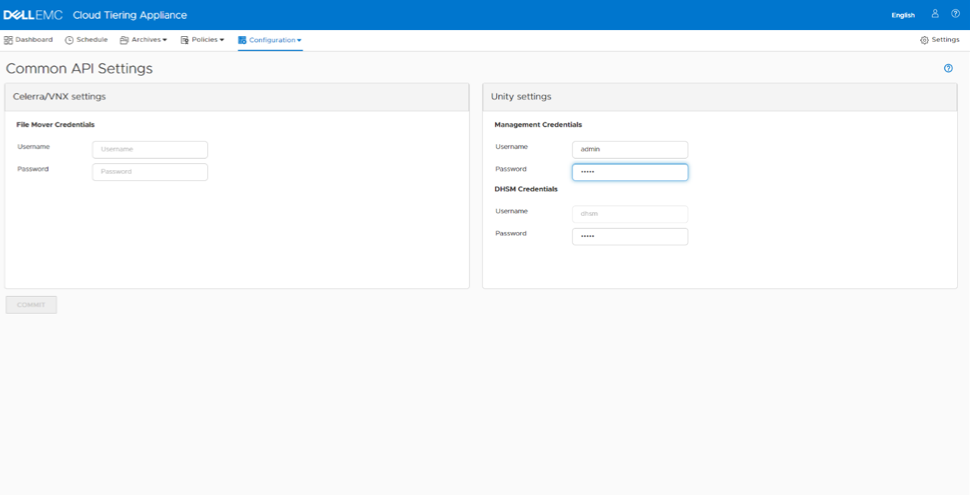 One thing we would like to point out in relation to this configuration: if you want to attach multiple Unity arrays to the CTA, Dell EMC wants you to create a CTA administrative as well as a DHSM user account and password on each array, as you can only specify single accounts for this connectivity in the CTA interface. If users need to use different credentials per Unity, they could deploy a CTA to use per Unity.

To close, we at StorageReview are rather impressed with the Dell EMC Cloud Tiering Appliance overall and especially the newly released version 13.0, with much improved UI.  It’s bringing the benefit of tiering and cloud archiving to organizations as a zero-cost engine (reminder: it doesn’t include your cloud storage or network costs) for existing and prospective Unity XT storage array customers. We highly expect to see an uptick in market adoption of the Unity XT cloud tiering appliance moving forward.

If you’d like to read more about the Cloud Tiering Appliance, you can access the Dell EMC whitepaper here.

This report is sponsored by Dell EMC. All views and opinions expressed in this report are based on our unbiased view of the product(s) under consideration.