The HP Z2 Mini workstation is exactly what the name implies; it's a tiny workstation that looks more like a thin client than a full-fledged workstation. Make no mistake though, despite the diminutive  size, the Z2 Mini is still packed with everything most creative and design professionals need. Inside the case there's an NVIDIA Quadro M620-class GPU along with an HP Z Turbo PCIe SSD. For those who need a bit more local storage, there's also a standard 2.5" SATA bay that can house a hard drive or potentially a second SSD if needed. For those with visual performance requirements, the Z2 can drive up to six displays.

The HP Z2 Mini workstation is exactly what the name implies; it's a tiny workstation that looks more like a thin client than a full-fledged workstation. Make no mistake though, despite the diminutive  size, the Z2 Mini is still packed with everything most creative and design professionals need. Inside the case there's an NVIDIA Quadro M620-class GPU along with an HP Z Turbo PCIe SSD. For those who need a bit more local storage, there's also a standard 2.5" SATA bay that can house a hard drive or potentially a second SSD if needed. For those with visual performance requirements, the Z2 can drive up to six displays.

The Z2 Mini clearly addresses a major business need, that is, to deliver a high-end computing experience in space-constrained environments. In collaborative workspaces for instance, at 10% the size of a traditional HP desktop, the Z2 Mini will be much more welcome. With cohabitants in mind, HP has invested heavily in acoustics to make sure that even when under load, the Z2 pretty much keeps to itself. To increase flexibility in mounting, HP will offer a VESA sleeve mount, which will let the Z2 be positioned under a desk or even behind a monitor, to further free up desk space.

Anticipating that it may be difficult for customers to believe that a computer roughly the size of a small pizza box can handle intensive graphics applications, HP had the Z2 Mini certified with over 20 popular applications. Many of the common names lead the list, AutoCAD, Revit, SOLIDWORKS and many others headline. The Z2 Mini starts at $699 for a modest configuration. Our review unit carries an MSRP of $1698 and includes all the goodies like PCIe SSD, extra HDD and 32GB RAM.

The HP Z2 Mini really is a marvel of engineering when you compare it to other systems on the market. While smaller computers do exist, there are significant tradeoffs as they usually include low-end processors or integrated graphics. The enclosure itself is toolless, making access to the internal components very easy. Two fans and heat sinks ensure the Z2 Mini is quiet even under heavy load. Also, to say the Z2 Mini has lots on connectivity is putting it mildly; it has more ports than some full-size desktops!

The rear of the device is where a bulk of the connectivity resides. Here there is an RJ45 LAN port, two USB 3.0 ports, two USB-C ports, a legacy serial port, four Display Ports, and the DC power input. Along with the ports there is an HDD LED status light, a security slot, and the cover latch.

The cover comes off easily with no need to break out a screwdriver. Beneath the cover are the two fans and a 2.5" HDD. While a hard drive might seem dated, it's included it purely for additional storage capacity. The main boot drive is a high-performing HP Z Turbo PCIe SSD. 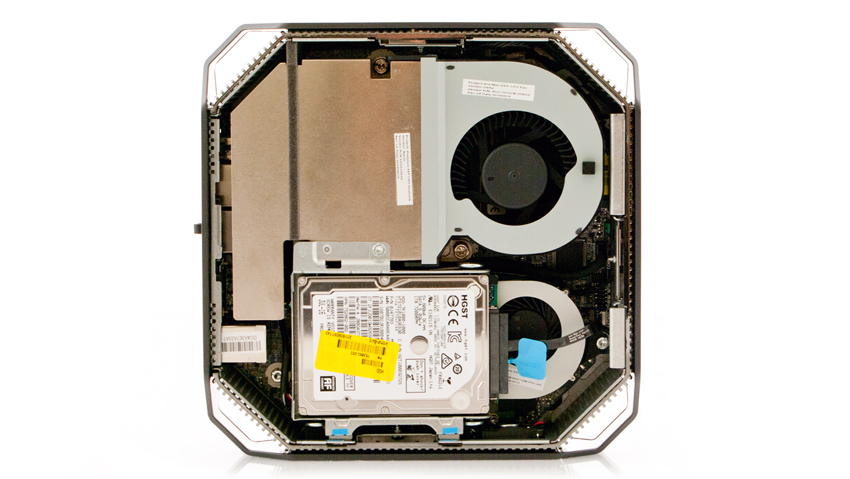 The larger of the two fans can be folded down for easy access to the DRAM, again with no tools required. 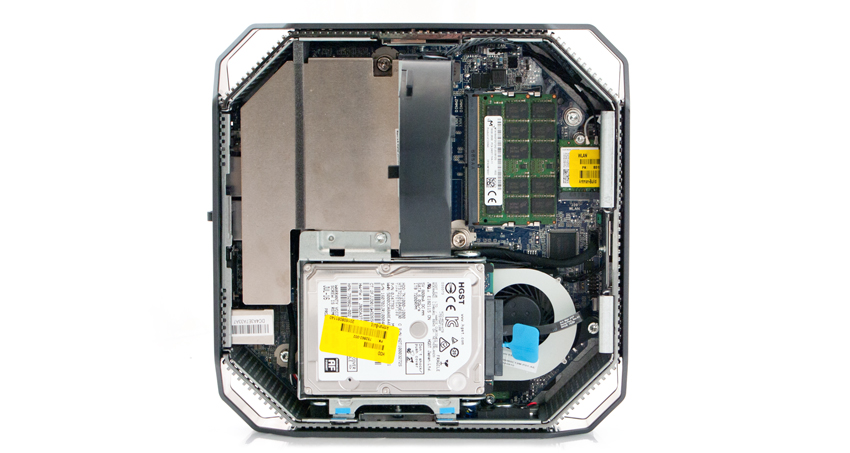 Not pictured here are the Z2 Mini’s multiple mounting options. The Mini being small makes it easy to place on a desk, but if the desk is already full, the Mini can be just as easily used without taking up any space. The Mini can easily be attached to monitor stands. If users have display arms instead of a monitor stand, the rubber feet come off beneath the Mini and the workstation can be mounted between the display arm and the monitor. Users can also add on a security sleeve that enables them to mount the Mini under the desk. The sleeve allows for a padlock loop for one level of protection and the sleeve can be turned to block the side USB ports to keep ne’er-do-wells from popping in a flash drive and taking something off of the Mini or adding something to it.

In order to test the HP Z2 Mini workstation, we will be using various benchmarks that demonstrate how the workstation performs in resource-intensive workloads and storage tests. For comparison purposes, we've included the z640 data with both M2000 and M5000 GPUs as well as the data from the HP Z1 G3 all-in-one workstation. This isn't meant to be a head-to-head comparison; the data simply provides context for the Z2 and the NVIDIA Quadro M620.

The first benchmark is SPECviewperf 12, the worldwide standard for measuring graphics performance based on professional applications. SPECviewperf runs 8 benchmarks it calls viewsets, all of which represent graphics content and behavior from actual applications. The results of these viewsets include: CATIA (34.38), Creo (36.99), Energy (0.64), Maya (30.02), Medical (10.82), Showcase (20.40), Siemens NX (28.60), and Solidworks (58.56). Overall, the Z2 does give a strong performance for something in such a compact form factor. As expected, these results were not as strong compared to workstations like the Z640 and the Z1 that have the room to offer higher end GPUs.

Using our ESRI benchmark, we look at several aspects of the ArcGIS program; however, we are most interested in the average of the drawtime, average frames per second (Average FPS), and minimum frames per second (Minimum FPS). Looking at drawtime, the Z2 showed impressive average time with 00:00:04.93. Average FPS gave us 179.39 and Minimum FPS showed the Z2 performing at 97.58.

While there are multiple categories PCMark looks at (including typical work usage, home usage, and creative usage) we will only be looking at Storage. The Storage benchmark tests the performance of any drives installed in the system. Specifically, it leverages traces recorded from Adobe Creative Suite, Microsoft Office and a selection of more popular video games to measure real-world performance differences between storage devices. Here, the Z2 hit a PCMark score of 5066 with a bandwidth of 484MB/s. It should be noted these are all the same underlying SSD and the z640's drive was tested as a secondary drive, where the other two are the boot drive with Windows installed.

The HP Z2 Mini solves the issue of getting a lot of power into a workstation without taking up precious real estate on the desk or in the ever-shrinking cubicles. Not sacrificing performance for size, the Z2 Mini can pack two drives (a PCIe SSD and an extra 2.5" drive 1TB—HDD or SSD), an NVIDIA Quadro M620-class GPU, and up to 32GB of RAM. The Mini can support up to 6 displays, which is ideal for those in the financial industry. Not only does the Z2 have a small footprint, but also it has multiple mounting options to further save space including: under the desk, off the back of a monitor stand, and, most interestingly, on display arms in between the arm and the back of the monitor. Aside from so many appealing options, the HP Z2 Mini starts at just $699.

For workstation performance we run a barrage of graphics-intensive testing. On the graphic intensive side we ran SPECviewperf where the Z2 Mini had good scores however it was still outpaced by larger HP workstations that have more robust GPUs. Looking at SPECwpc the Z2 Mini showed a stronger performance over the All-In-One, but to no surprise was trailing the larger desktops. Our final graphics-intensive benchmark, ESRI, showed once again that the Z2 Mini could easily outperform the All-In-One. For storage benchmarks we ran our PCMark benchmark. With the PCMark the Z2 Mini actually performed better in total score, 5,066, and bandwidth, 484MB/s, than the larger desktop, however, the All-In-One did perform better than the Mini.

The Z2 Mini is a very impressive machine in both design and performance. The system has everything needed for most tasks, even those that are GPU-intensive, while managing to make very few sacrifices. Sure, there are many cases with a larger desktop will be needed for expansion slots, more aggressive GPUs and the like, but those cases are shrinking. What HP has done with the Z2 is successfully convince us that a majority of PC CAD/design use cases can be transitioned to this mini workstation. The HP Z2 Mini is by far the most compelling workstation in terms of uniqueness and feature set that we've seen in the lab.

The HP Z2 Mini is a small workstation that can not only keep up with the big dogs, it can pass them. The Z2 Mini can be mounted in a number of ways, supports multiple displays, and starts at under $700.