The Micron 5100 SSD family is the new series of SATA SSDs aimed at data-center adoption. Micron has released three flavors for specific use cases: the ECO for read-intensive workloads such as video streaming, the PRO for latency-sensitive transactional databases, and the MAX for write-intensive logging applications. All of the drives come in two form factors: 2.5-inch and M.2, and in capacities up to 8TB for the 2.5-inch and 2TB for the M.2.

The Micron 5100 SSD family is the new series of SATA SSDs aimed at data-center adoption. Micron has released three flavors for specific use cases: the ECO for read-intensive workloads such as video streaming, the PRO for latency-sensitive transactional databases, and the MAX for write-intensive logging applications. All of the drives come in two form factors: 2.5-inch and M.2, and in capacities up to 8TB for the 2.5-inch and 2TB for the M.2. 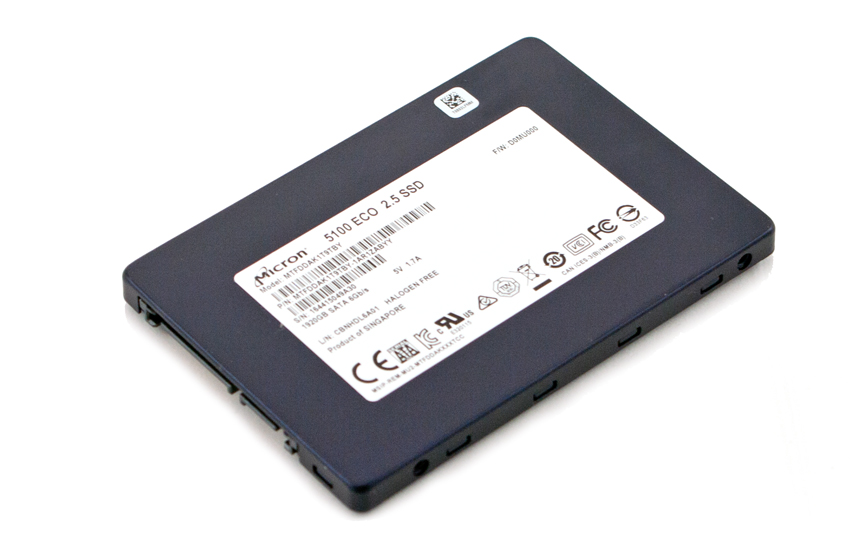 For this review, we will be looking at the ECO or read-intensive drive. The 5100 ECO has several benefits that make it appealing to the data center. High capacity in a small form factor is an always-welcome benefit, as it keeps overall footprint down. As stated above, the 2.5” version runs up to 8TB and the M.2 can run up to 2TB. Micron is claiming consistent, steady state performance writes at 74K IOPS. From a security standpoint, the drives come with AED-256 bit encryption. The drive can be optimized to the workload by using Micron’s FlexPro firmware. The best use cases for the drive are Big Data, content delivery, database management, virtualized environments, and open compute.

The Micron 5100 ECO has the same typical design one has come to expect with data center drives. It has no bells or whistles; just a dark bluish case. On the top is the typical sticker with drive information such as name, branding, and capacity. The bottom of the drive is a solid blank with the tamper seals visible. 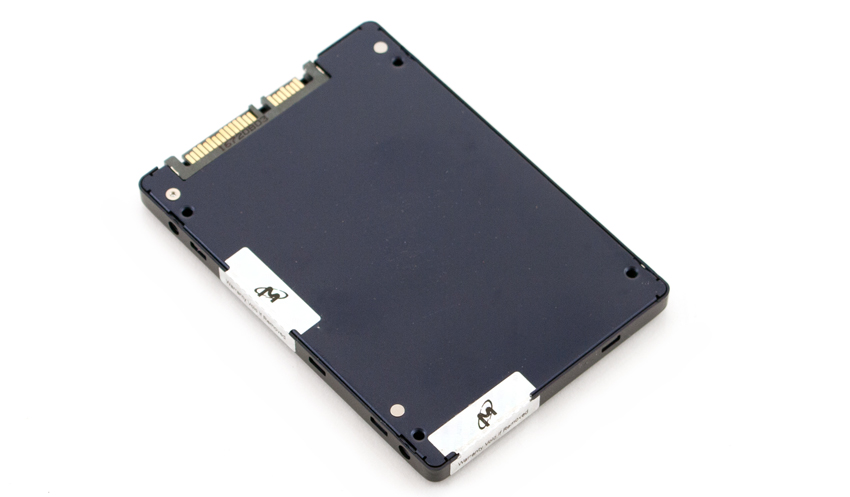 The case, like most Micron SSDs, pops apart with a little bit of effort. Underneath, one can see four Micron NAND packages and Micron controller on top. 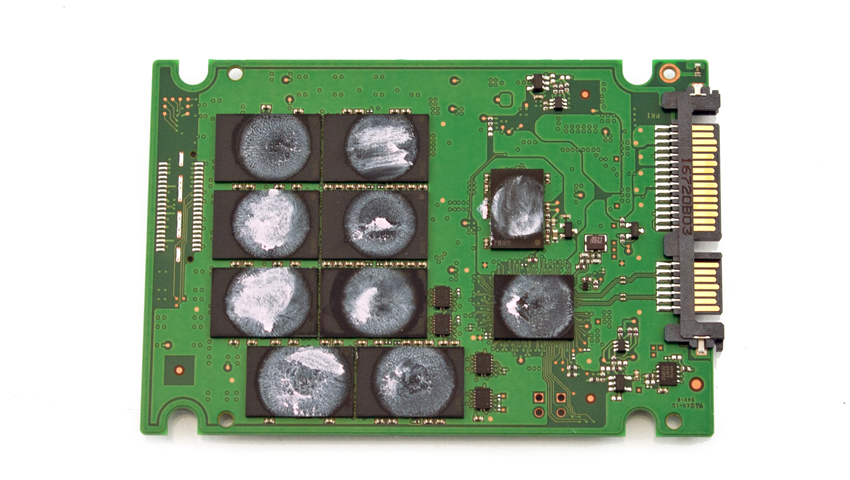 On the flip side is the rest of the NAND packs and DRAM. 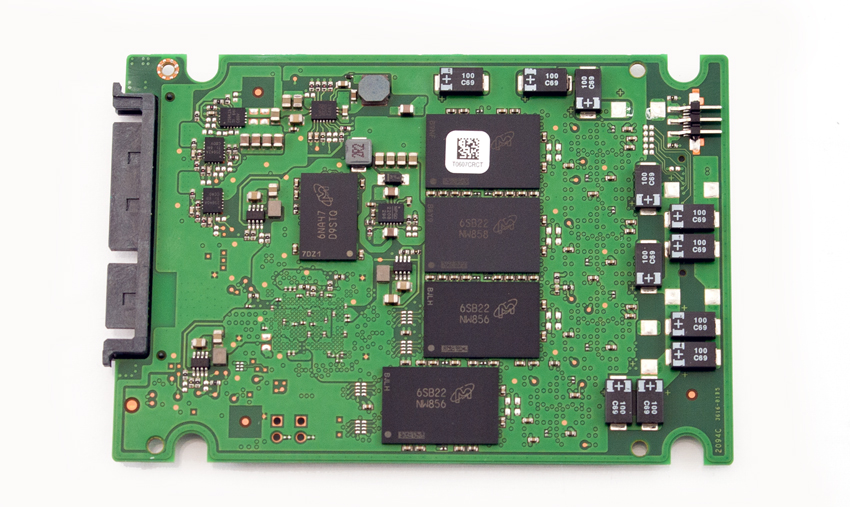 As the capacity and performance for SATA and SAS drives increase, StorageReview has pivoted to a more aggressive testing regimen for individual SSDs. This testing process is mirrored across NVMe products as well, making the comparison process easier–even though products perform in vastly different classes at the top-end. In this review, we compare the 1.92TB Micron Eco to the 1.92TB Toshiba HK4R, as well as three additional SAS3 products that help set a high-performance reference point. As more drives come into the test lab with a capacity greater than 1.2TB, we will continue to add comparables into this group.

In order to understand the performance characteristics of enterprise storage devices, it is essential to model the infrastructure and the application workloads found in live production environments. Our first benchmarks for the Micron 5100 ECO are therefore the MySQL OLTP performance via SysBench and Microsoft SQL Server OLTP performance with a simulated TCP-C workload. For our application workloads, each drive will be running 2-4 identically configured VMs. 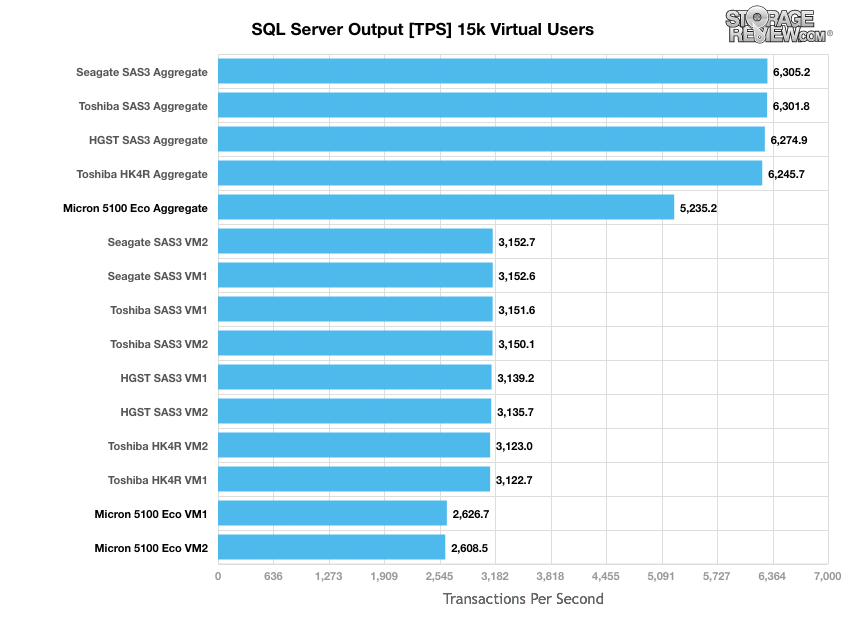 Average latency showed the 5100 ECO once again placing last, only by a much more considerable margin. Individual VMs ran between 954ms and 991ms with an aggregate score of 973ms. The HK4R had an aggregate latency of 61ms. 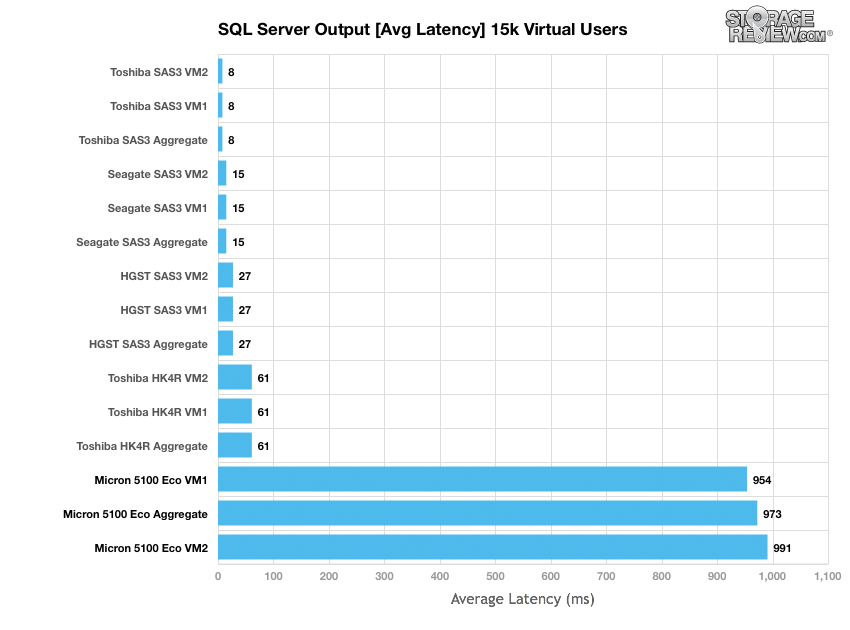 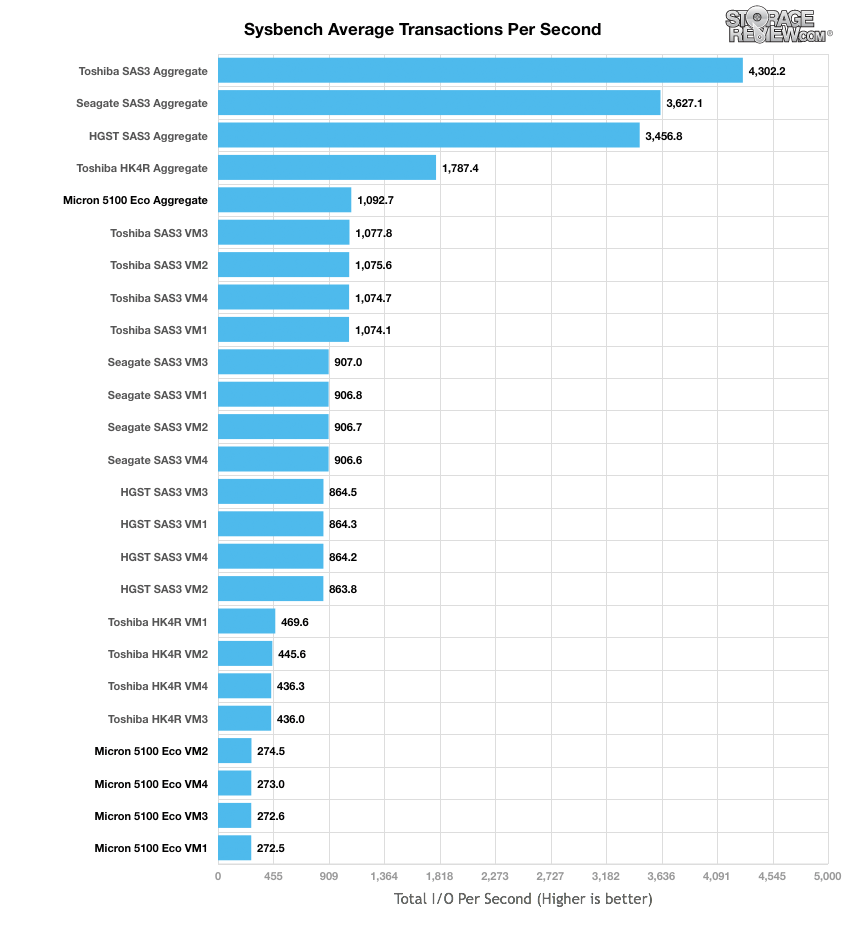 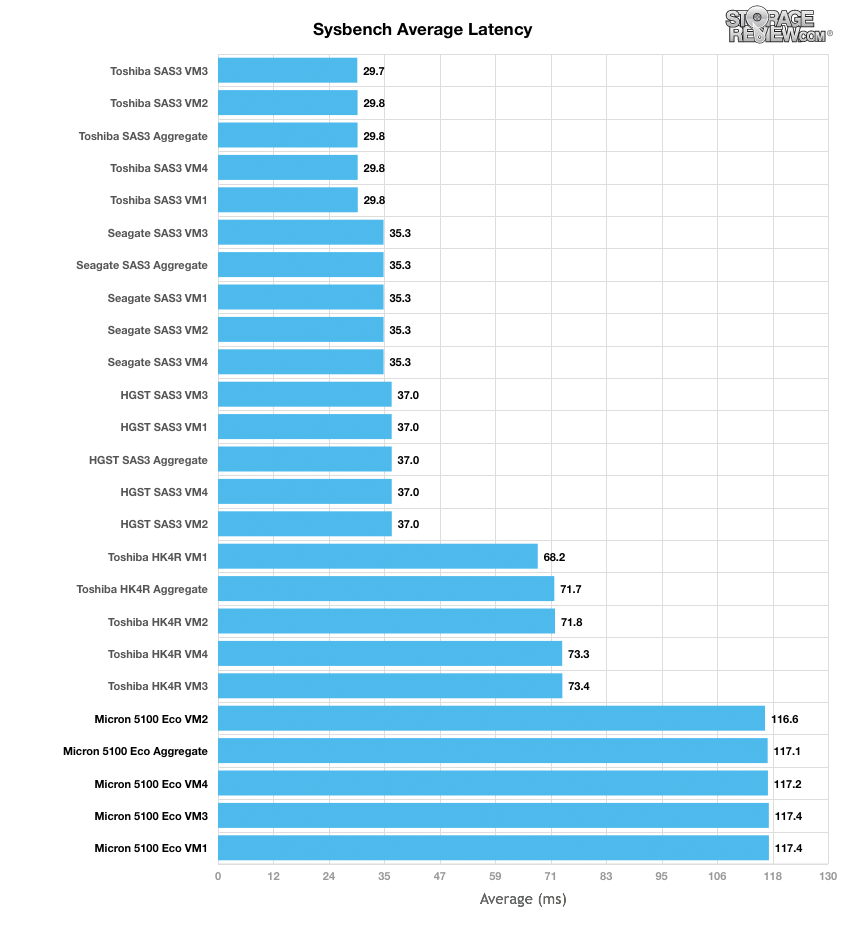 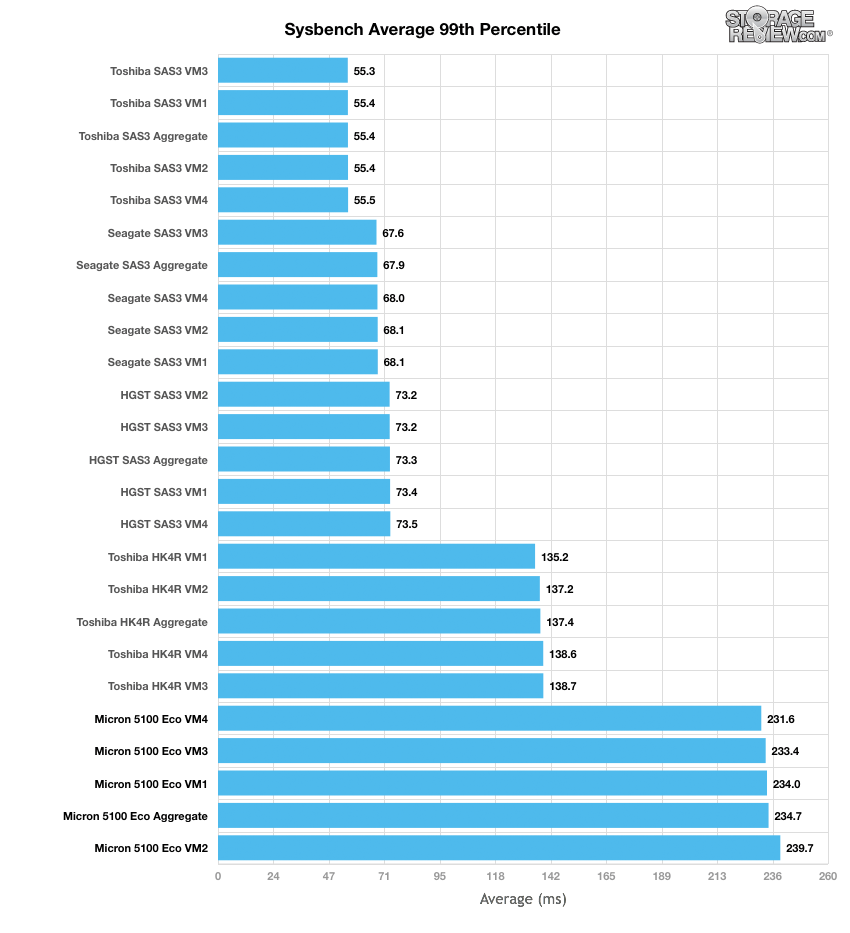 The ECO is the read-intensive model of Micron’s new 5100 family of data-center drives. This SATA drive comes in capacities up to 8TB for the 7mm 2.5” model and up to 2TB for the M.2 model. The drive has security features such as AES-256-bit encryption and users will be able to optimize the drive using Micron’s FlexPro firmware. According to Micron, the new drives are targeted for use cases such as Big Data, content delivery, database management, virtualized environments, and open compute.

The trick with the SATA SSD space sometimes is defining what exactly it's targeting. Broad targets like big data sound nice and make intuitive sense, but let's categorize it another way and think about the SATA SSD in a few key roles: server boot, in-server storage and capacity tier for SDS (think vSAN). In these cases, there are several important considerations, but performance isn't generally the top one or two or even three. In fact, in many scenarios, a SATA SSD will be the first line replacement for 10K and 15K HDDs that still dominate the performance/capacity story in the enterprise today.

In regards to the 5100 ECO specifically, it's not a great performer. However, it doesn't necessarily have to be. Booting an ESXi server isn't particularly hard, and running a clustered database that's considering SATA drives clearly isn't a performance-first operation. In vSAN, the goal is to have reads and writes hit the cache, and the capacity tier mostly just needs to be reliable and available. And just think about the object-store efficiency and TCO gains when pricing of the 8TB 5100 makes sense from an HDD replacement perspective. The key to success with this drive is going to be based on cost optimization, something Micron has a good deal of control over given the vertical integration. They've proven reliability over a very long term; now the drive needs to be cost-effective to justify the like-for-like replacement (with a sizable performance bump) over the legacy performance HDD business.

The Micron 5100 ECO is a data center drive with up to 8TB of capacity and a track record of reliability and stability, but lacks in performance compared to other read-centric SATA enterprise SSDs.