The HP Z2 Tower G4 workstation is the next generation up from the Z240. HP is targeting the Z2 at entry and mid-range creators needs in AEC/Product Dev (e.g., CAD), Higher Education (e.g., Engineering labs), as well as Media and Entertainment (e.g., Maya). It is 13% smaller but with options for graphics packages providing 60% more power than the Z240.

The HP Z2 Tower G4 workstation is the next generation up from the Z240. HP is targeting the Z2 at entry and mid-range creators needs in AEC/Product Dev (e.g., CAD), Higher Education (e.g., Engineering labs), as well as Media and Entertainment (e.g., Maya). It is 13% smaller but with options for graphics packages providing 60% more power than the Z240. 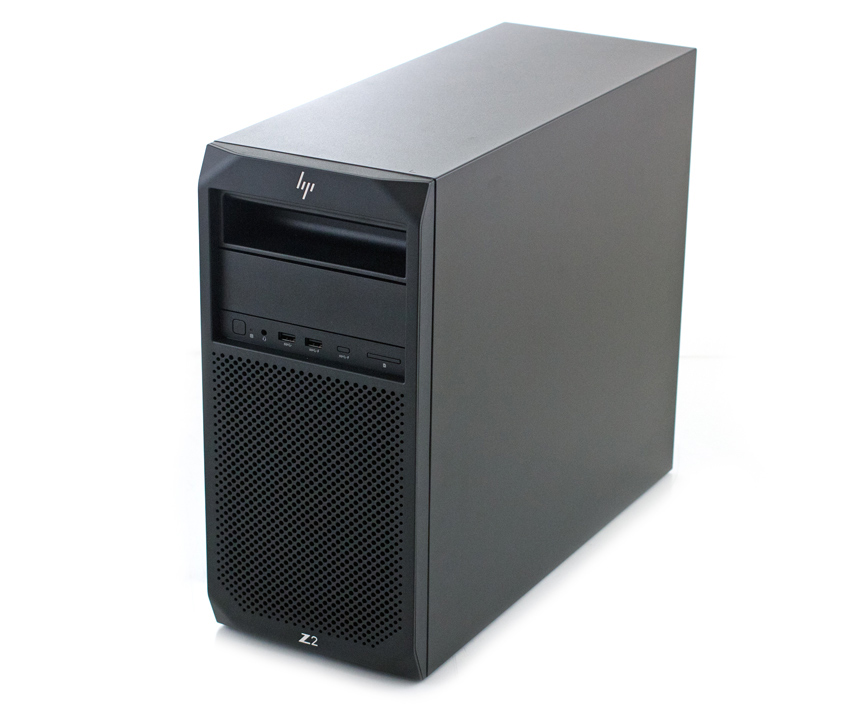 Like many HP and other off the shelf workstations, the Z2 offers several customization options. For processors, it leans towards 8th generation Intel processors but also supports several Xeon processors and even a Pentium. Notably, many of the CPU options boast six cores, a major plus for anyone doing multi-threaded work. The Z2 also offers a range of hard drives depending on your storage and access speed needs, including their HP Z Turbo Drive G2 PCIe NVMe SSD. The NVMe drives provide some pretty significant performance gains over standard high-performing SSDs. This includes faster boot up, calculation, and graphics response times. It also allows for ideal work conditions under resource-heavy applications, adding a ton of versatility and power to the Z2.

Up front, there's a headphone/microphone combo port for easy access. In addition to the headphone port. Between them, they should cover all of your in-office audio output needs to help drown out distractions. The front ports are rounded out by 2 USB 3.0 ports, but only 1 of them provides charging. There's also the option of adding 1 USB 3.1 Gen 2 Type-Cport. It is nice to see support for Type-C ports spreading. In back there are four more USB 3.0 ports in most models as well as several other ports including a DVI-I single link and 2 DisplayPort1.2s.

The front comes with a removable dust cover. After blocking off space for the optical drive bays, the Z2 still has over 50% of its front surface area devoted to facilitating airflow and thus cooling. Not bad, especially considering the smaller surface area compared to its predecessor. Like most of the other Z models, the corners are chiseled which makes them ever so slightly less painful to prop up with a foot while plugging cables in or when you inevitably bump into it during installation. 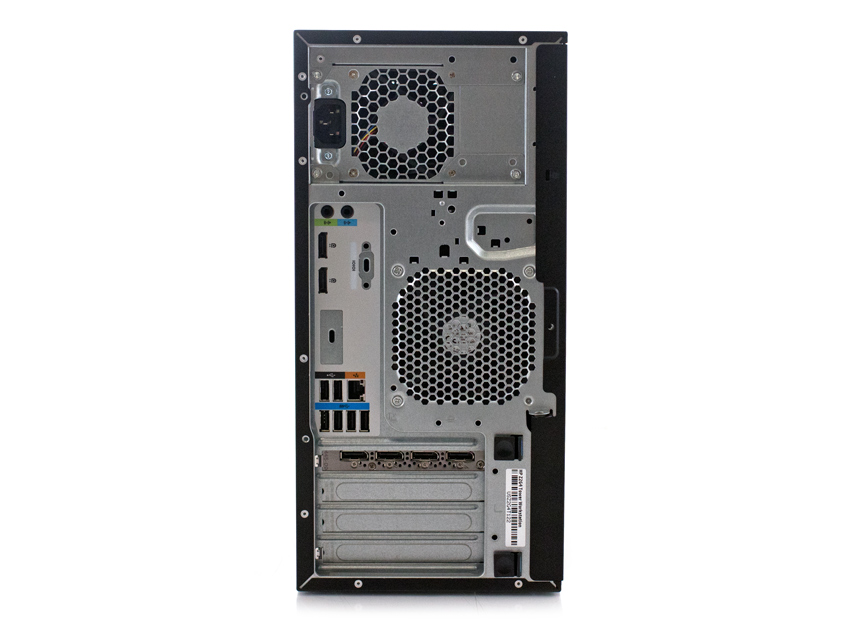 Flipping the Z2 around to take a look at the rear we can see how HP went all out to cut down the size. The only parts of the rear that provide airflow have fans backed up right against them. The top is for the power supply of course. The other one is aligned with the cooling tower for the CPU. Also seen here is the flexible rear I/O port which HP allows the customer to choose one of several options for as listed in the specifications above. 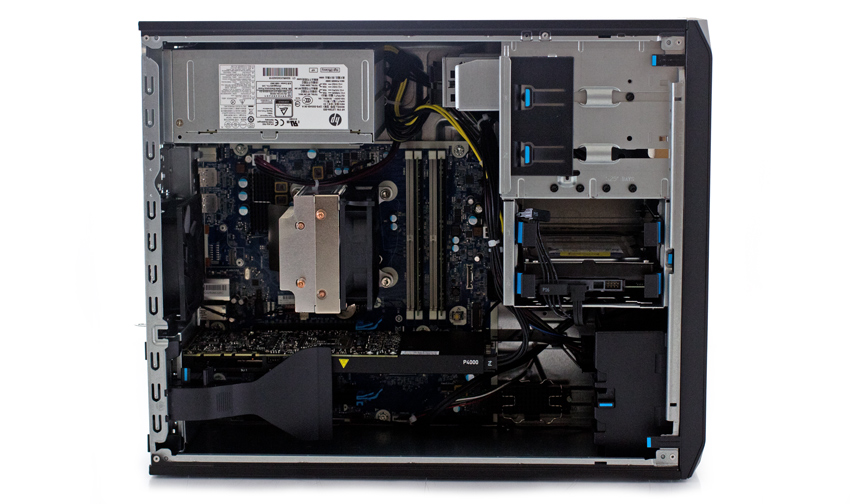 Removing the side panel, we can see the tightly packed interior. Despite the restricted space, the cables were still tucked away neatly for the most part. Our review model came with a NVIDIA Quadro P4000 Graphics as well as two 16gb memory sticks as you can see here. You can also see the two unused memory slots. Clustered at the bottom and largely hidden by the graphics card and the tab are additional PCIe ports.

To test the HP Z2 Tower's performance in resource-intensive environments, we put the workstation through three specific benchmarks. These tests will also show how well the Quadro P4000 performs inside the Dell mobile workstation. We've also compared it to the following workstations:

This first benchmark used to test the Z2 is the SPECviewperf 12 benchmark, which is the worldwide standard for measuring graphics performance based on professional applications. SPECviewperf runs 9 benchmarks called “viewsets.” These represent graphics content and behavior from actual applications and include categories such as 3D Max, CATIA, Creo, Energy, Maya, Medical, Showcase, Siemens NX, and Solidworks.

Next up is our SPECwpc test. This benchmark is designed for gauging all of key aspects of workstation performance and consists of over 30 workloads related to CPU, graphics, I/O, and memory bandwidth. The workloads fall under broader categories, such as media and entertainment, financial services, product development, energy, life sciences, and general operations, which are an average of all the individual workloads in each category. The HP Z2 G4 showed the following results when equipped with a Quadro P4000.

For SPECwpc the new Z2 Tower was able to easily outperform the mini version but trailed behind the more powerful desktops.

Using our ESRI benchmark, we look at several aspects of the ArcGIS program; however, we are most interested in the average of the drawtime, average frames per second (Average FPS), and minimum frames per second (Minimum FPS). Looking at drawtime, the HP Z2 tower G4 showed an average time of 0:06.372, while average and minimum FPS recorded a solid 494.04 and 259.09, respectively.

The HP Z2 G4 workstation is an entirely adequate entry-level desktop workstation. Noticeably smaller than its predecessor, it still manages to offer significant customization options that can boost its performance to the next level including support for full-size add in cards. Users can equip the workstation with 8th generation Intel Core processors, up to 64GB of DDR4 memory, and multiple storage options form SATA to NVMe depending on storage performance needs. Also depending on needs, the Z2 G4 can be outfitted with a slew of GPU options form Intel to AMD Radeon Pro to NVIDIA Quadro.

Though it is an entry-level workstation, the HP Z2 G4 had some impressive performance, particularly in our SPECviewperf where it outperformed the much more powerful Z640 across the board. In the less graphics intense but more overall check of performance in the SPECwpc the Z2 G4 was able to out perform the mini but unsurprisingly couldn’t keep up with the larger more powerful Z640. In our ESRI benchmark the Z2 G4 had an average drawtime of 6.372 seconds but it really shined in average FPS at 94.04 and Minimum FOS at 259.09 on average for both.

Being an entry-level workstation, the HP Z2 Tower G4 can still bring some impressive performance as well as lots of customizations in order to fit into several use cases.