HP has released the HP ZBook 14u G6, the 6th generation of their mobile workstation line. It features a thin and light design with beefed up specs and a stunning display. Designed to meet the demands of modern workflows the HP ZBook 14U G6 offers high performance without the weight. It is geared towards power users and designers who need daily dependability running resource intensive applications like Adobe or Solidworks while on the go. A look at the specs show a range of options notably 8th gen Intel Quad-Core i7 processors, up to 64 GB of RAM, and AMD Radeon Pro 3D Graphics (4GB). Multiple on board features aid in collaborative work as well.

HP has released the HP ZBook 14u G6, the 6th generation of their mobile workstation line. It features a thin and light design with beefed up specs and a stunning display. Designed to meet the demands of modern workflows the HP ZBook 14U G6 offers high performance without the weight. It is geared towards power users and designers who need daily dependability running resource intensive applications like Adobe or Solidworks while on the go. A look at the specs show a range of options notably 8th gen Intel Quad-Core i7 processors, up to 64 GB of RAM, and AMD Radeon Pro 3D Graphics (4GB). Multiple on board features aid in collaborative work as well. 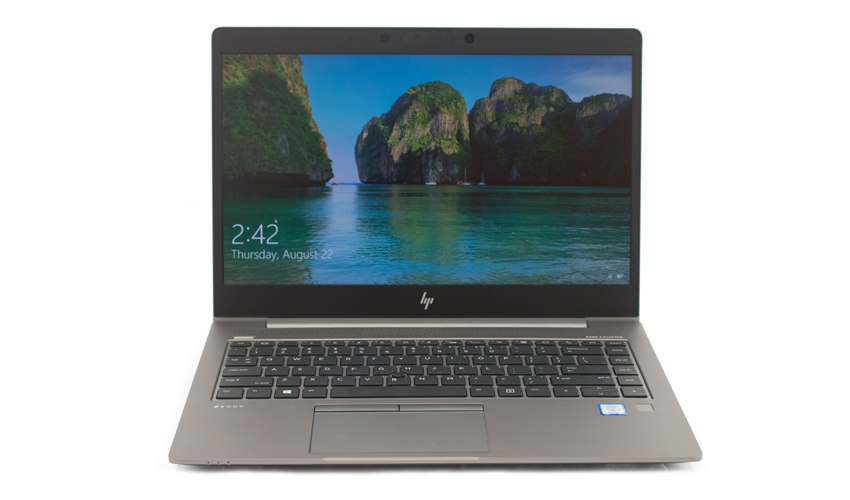 Whether you want all the bells and whistles or if you choose budget minded options every aspect features upgrades with more power than a standard notebook. For customization the base price starts at $1,400, with upgrades and add ons the final cost increases and can be as much as around $3,000.

The design of the HP 14u G6 has a premium look and feel. The quality of the design is in the details. It features a precision-crafted all-aluminum design with a rich anodized turbo silver finish and narrow bezel display. It weighs only 3.27 pounds and it features a thinness of 17.9 mm. Built to last with tried and true durability, it was designed to pass 19 extensive military, MIL-STD 810G, tests and went through over 120K hours of testing before hitting the market.

Users of the previous generations of the HP Zbook 14u called for a display that is super bright with a wider color gamut and HP delivered. The HP 14u G6 features an upgraded 100% Adobe RGB display which provides access to more colors than sRGB. Other upgrades from the previous generation include faster file transfer with WIFI 6, 50% more graphics processing power with 4GB of DDR5, and more RAM is supported (up to 32 GB). 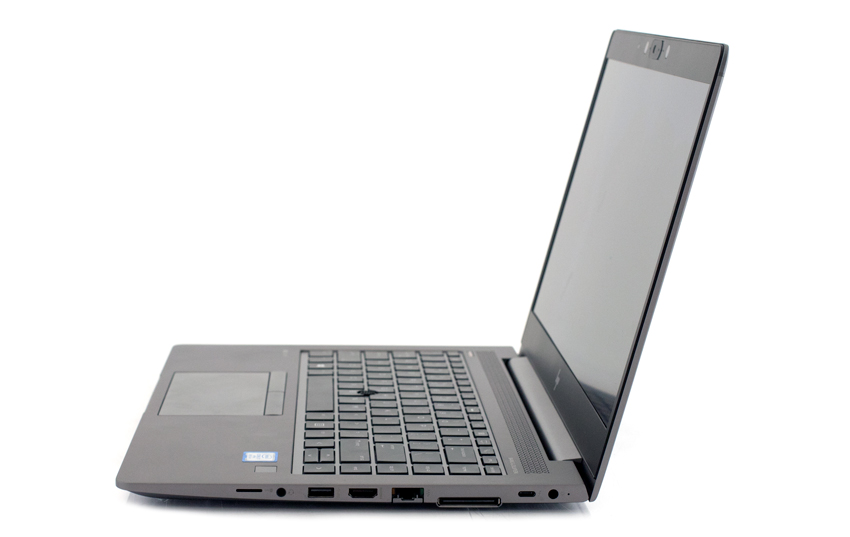 Looking at connectivity not much has changed from the previous generation. Most of the ports and features are found on the sides. Located on the right side is a sim card slot, an audio jack, USB 3.1 port, HDMI port, an RJ-45 jack, an ultra slim dock connector, a Thunderbolt 3 USB-C, and a power connector. The left side features another USB 3.1 port, a smart card reader, a lock slot, and ventilation.

Collaborative features for easy conferencing have also been built in with the HP collaboration keyboard, a world facing mic, and HP privacy camera. The collaboration keys adjust volume, join a call, end a call, mute, and unmute. With a third microphone facing outwards you can pick up other people’s voices in a meeting room, or cancel ambient noise. Also, the days of covering your camera with a sticky note are gone. You no longer have to worry about your camera when it’s not in use because the HP privacy camera slides to physically cover the camera.

Upgrades and repairs have also been made easy with quick access to multiple components, including memory, storage, WLAN, and WWAN modules with bottom panel removal. 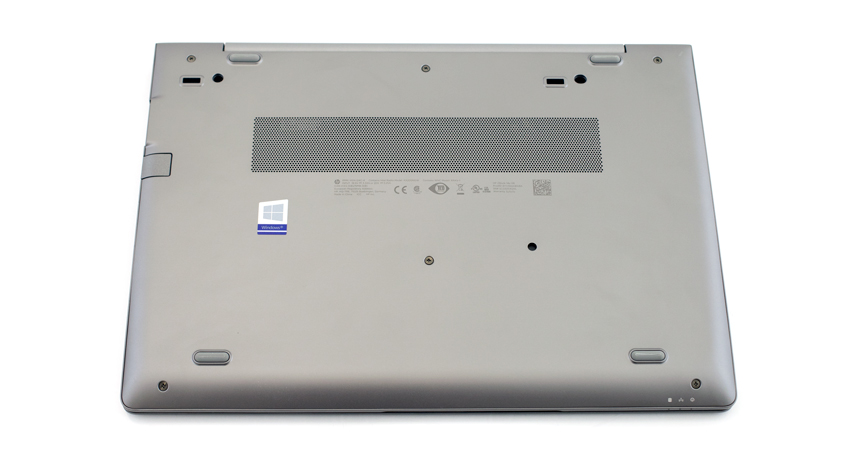 To boost graphics power and capability the AMD Radeon PRO WX 3200 is an available option which is an upgrade from the previous generations AMD PRO WX 3100. The Radeon Pro WX 3200 is a performance professional graphics card by AMD. The WX 3200, based on the 14 nm Polaris GPU architecture, features 10 compute units with 640 next stream processors and 4GB DDR5 (96GB/s bandwidth). It also offers 1.66 TFLOPs single precision compute with four mini DP 1.4 outputs capable of supporting four 4K or single 8K displays.

We all know when it comes to computers what’s inside is what really matters and a virus can just as easily destroy a laptop just as much as any potential physical damage. Reinforcing dedication to security and protection in all aspects ZBooks feature comprehensive layered protection with HP trademark technologies HP Sure Sense, HP Sure Click, and HP Endpoint Security Controller. ZBooks are designed to be secure from the time they leave the factory with security built in and not added on. A new feature this year, adding another layer of protection is HP Sure Sense, which leverages AI deep learning to protect against zero day attacks and offer enhanced ransomware protection. However, the hallmark of HP from a security standpoint is HP Sure Start, a self healing PC BIOS that automatically protects firmware that antivirus solutions can’t from malware, rootkits, or corruption.

We put the HP ZBook 14u G6 through three resource intensive tests to see what it can do as well as test the capabilities of the AMD Radeon Pro WX 3200. For, comparison we brought in the HP ZBook Studio x360. First we ran SPECworkstation3, a test that specializes benchmark designed for testing all key aspects of workstation performance; it uses over 30 workloads to test CPU, graphics, I/O, and memory bandwidth. The workloads fall into broader categories such as Media and Entertainment, Financial Services, Product Development, Energy, Life Sciences, and General Operations. We are going to list the broad-category results for each, as opposed to the individual workloads. The results are an average of all the individual workloads in each category.

The second test we performed s the SPECviewperf 13 benchmark, which is the worldwide standard for measuring graphics performance based on professional applications. SPECviewperf runs 9 benchmarks called “viewsets,” which represent graphics content and behavior from actual applications and include categories such as 3D Max, CATIA, Creo, Energy, Maya, Medical, Showcase, Siemens NX, and Solidworks.

The HP ZBook 14u G6 is a mobile workstation sized for portability. When compared to other workstations this workstation might seem restricted but, traditional and more powerful workstations tend to be heavy. When carrying around a laptop all day a few pounds makes a big difference. The HP 14u is budget friendly, incredibly thin, and certified to run a host of professional applications. Notable improvements from the previous generation include a better display, more graphics power, faster WIFI transfer speeds, and more RAM. It is a product where form follows function. The 100% Adobe RGB UHD display is optimized for on the go graphics jobs and the built in collaborative features offer easy on-site and virtual conferencing. At top specs the ZBook 14u features an 8th Generation Intel i7 processor, up to 64 GB DDR4 2400MHz non-ECC SDRAM, up to 2TB NVMe SSD storage, and an AMD Radeon Pro WX 3200 (4 GB GDDR5) GPU.

Looking at performance we didn’t necessarily have a comparable equal to match the HP ZBook 14u G6 with. The HP 14u and x360 are in two different leagues and it’s clear as day when looking at the results. The HP 14u G6 is more of an entry workstation notebook, while the ZBook x360 is up market with a bit more punch and price. The HP 14u G6 is a workstation aimed at entry to midrange users and brings great performance for that targeted audience. In our ESRI ArcGIS Pro tests, it produced solid scores and performed better than the x360 in several tests including having better Average FPS and Minimum FPS in two of the three tests.

Overall, this is a great pick for a smaller form factor with more power than a standard work computer.