The HP ZBook Studio x360 G5 workstation is a versatile hybrid notebook that is ideal for those working in fields like 3D developing, architecture, and design. All you have to do is glance at the spec sheet to know it is well-suited for resource-intensive workloads, as it can be decked out with options such as a range of next-generation six-core Intel Core i9 or Xeon processors, an ample  amount of RAM, and NVIDIA Quadro professional graphics. The new ZBook’s build also makes it easy to use in collaborative environments: the aptly named x360 features a 360-degree hinge for some pretty seamless maneuverability.

The HP ZBook Studio x360 G5 workstation is a versatile hybrid notebook that is ideal for those working in fields like 3D developing, architecture, and design. All you have to do is glance at the spec sheet to know it is well-suited for resource-intensive workloads, as it can be decked out with options such as a range of next-generation six-core Intel Core i9 or Xeon processors, an ample amount of RAM, and NVIDIA Quadro professional graphics. The new ZBook’s build also makes it easy to use in collaborative environments: the aptly named x360 features a 360-degree hinge for some pretty seamless maneuverability. 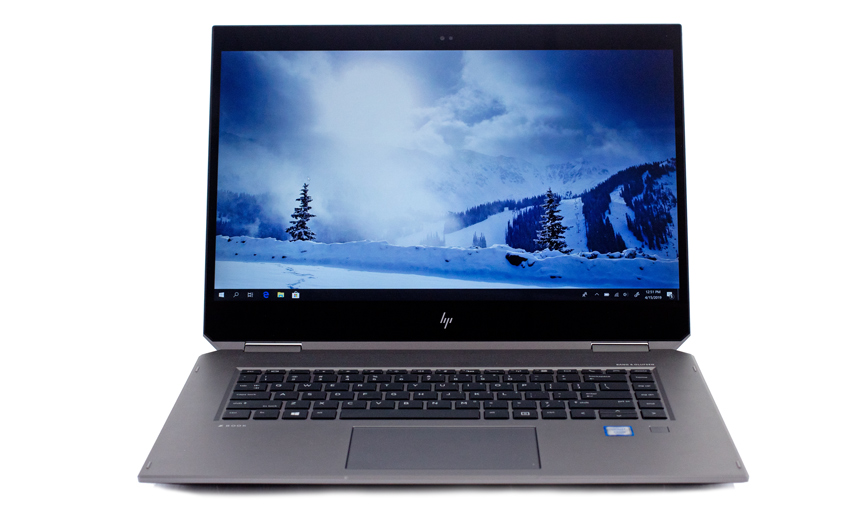 As for connectively, the x360 is equipped with 2 USB 3.0 ports, 2 USB 3.1 Type-C Thunderbolt 3 ports, and 1 HDMI port. It also comes with a 720p IR camera for facial recognition and a fast charging, battery that can soak up to 16 hours of usage before it needs to be plugged in, which is great for professionals on the go.

The x360 is highlighted by its components. Users can outfit their x360 with up to two 2TB PCIe NVMe M.2 SSDs, a hearty 64GB DDR4-2667 non-ECC SDRAM, an NVIDIA Quadro P2000 (4GB GDDR5 dedicated) and an Intel Xeon E 2186M vPro that features 2.9 GHz base frequency, up to 4.8 GHz with Intel Turbo Boost Technology, 12 MB cache and 6 cores). Those who have a limited budget can build their notebook with more economical hardware, including less RAM, Intel i5 processors, integrated graphics and SATA SSDs.

The HP ZBook Studio x360 G5 offers the styling elements of a high-end notebook with the versatility of a convertible tablet. While the ZBook x2 G4 has a completely detachable keyboard to turn into a full tablet, the Studio x360 is geared more at users who want traditional functionality with the ability to be used as a tablet as well. To further explain the traditional functionality comment, solid hinges are a differentiating item when comparing notebooks to a tablet with a magnet-attached keyboard. If you were to use the notebook on your lap for example, a kickstand and flexible keyboard barely works while you use it on your lap. Solid hinges though keep the screen stable, without requiring the depth of the stand behind the screen that something like the x2 G4 would require. This isn't to say one is better than the other, but instead that each system as its own usecase in mind, and if you try to put one in the wrong scenario the results can be frustrating.

With the folding hinge design the ZBook Studio x360 can be transformed into four different usability modes: the standard issue laptop mode, stand and tend modes for collaboration with the notebook standing as an A-frame, tablet mode for traditional tablet functionality with out a physical keyboard and docked mode for multiple displays. In notebook mode the x360 holds up quite well with minimal screen movement compared to a standard notebook. 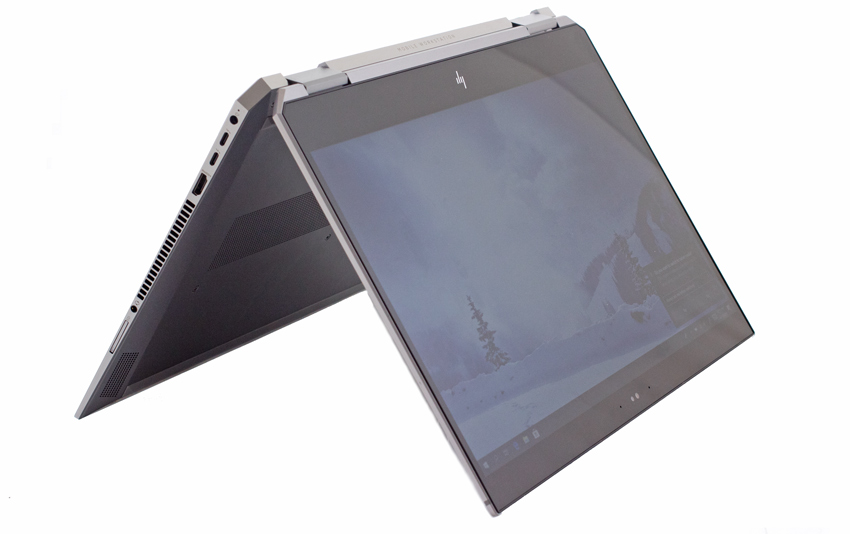 As for the screen itself the glossy 15.6" 4K panel is beautiful. Our review system came equipped with the 400 cd/m2 LED-backlit touch-sensitive panel and Corning Gorilla Glass 4 top surface. With the touch-sensitive panel bound to deal with more fingerprints and interaction, having a highly scratch-resistant surface is important. For users who demand an even brighter panel with a high color accuracy, HP offers a DreamColor option. The DreamColor panels come in glossy or matte finishes, with 100% AdobeRGB accuracy and a 600 cd/m2 brightness. Screen functionality includes the HD camera, IR camera and microphone at the top middle of the bezel. 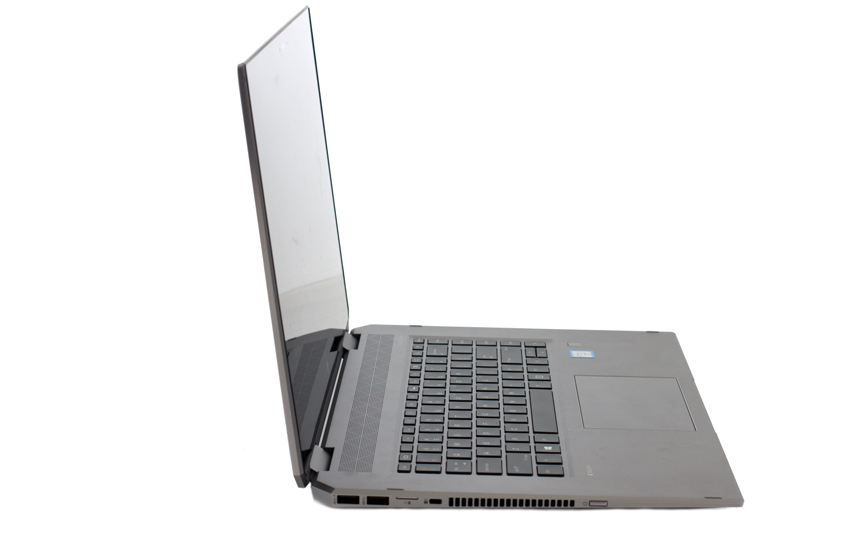 The keyboard itself is comfortable to use and features a click pad, fingerprint sensor, speakers and built-in collaboration keys, the latter, which allows users to manage calls. With other keyboard designs going to shorter throw designs (with questionable long-term durability) the HP ZBook x360 offers a breath of fresh air. It is delightful to type on, offering strong tactile feedback and is fully backlit for easy typing in poorly lit conditions.

On the left side are two USB 3.0 ports (one for charging), a security cable slot, the power button and a micro SD slot. Turning the notebook around to the right is the stereo microphone in / headphone-out combo jack, power connector, an HDMI 2.0 port, two Thunderbolt 3 ports, and an SD Card Reader.

We put the HP ZBook Studio x360 G5 through three resource-intensive tests to see what it can do as well as gauge the capabilities of the equipped Quadro P1000. We've also compared it to the HP ZBook x2 G4. We retested the ZBook x2 with our new benchmarks for this review. 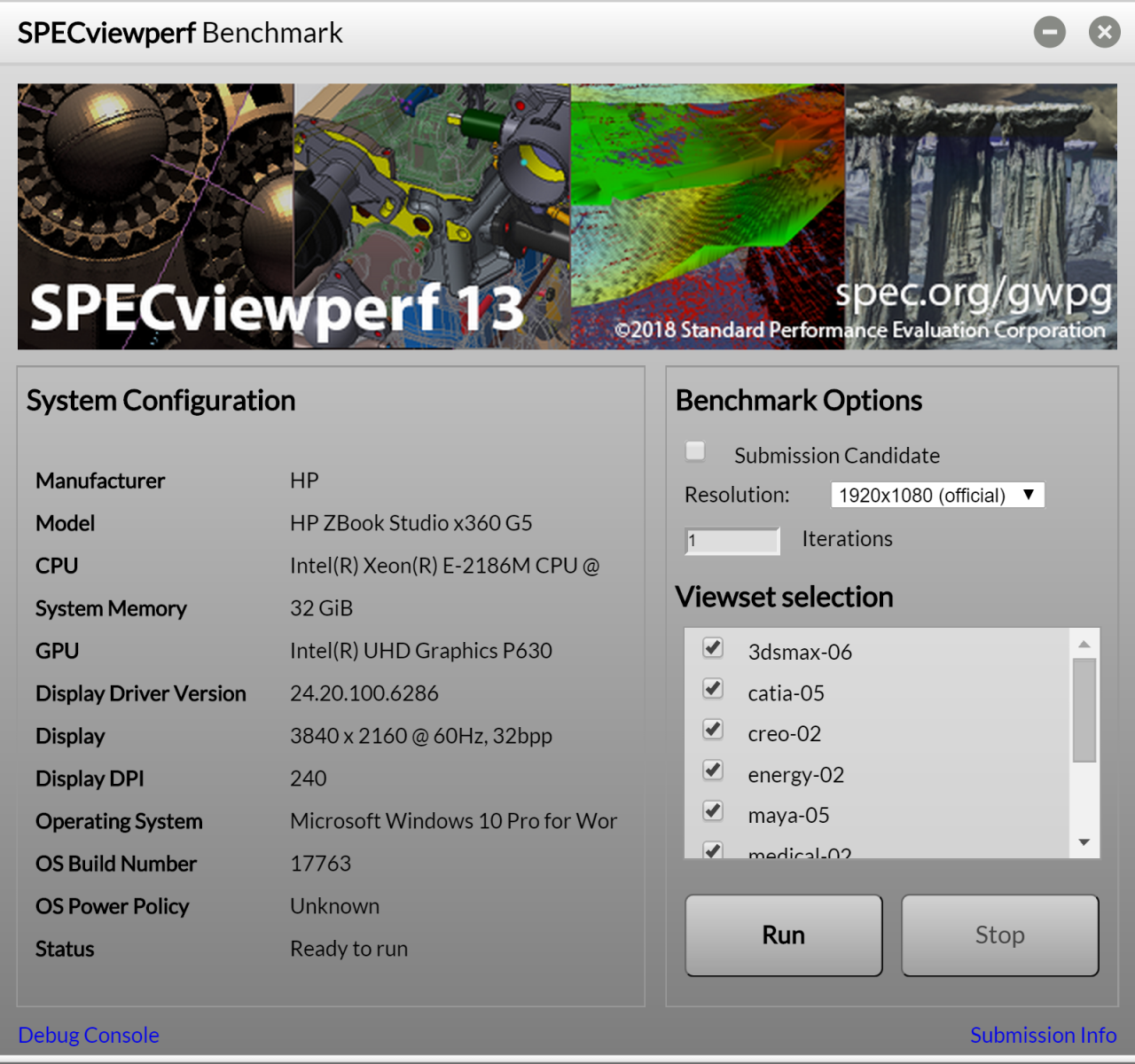 The ZBook x360 recorded solid results for its class and out performed the HP ZBook x2 G4 by a significant margin. 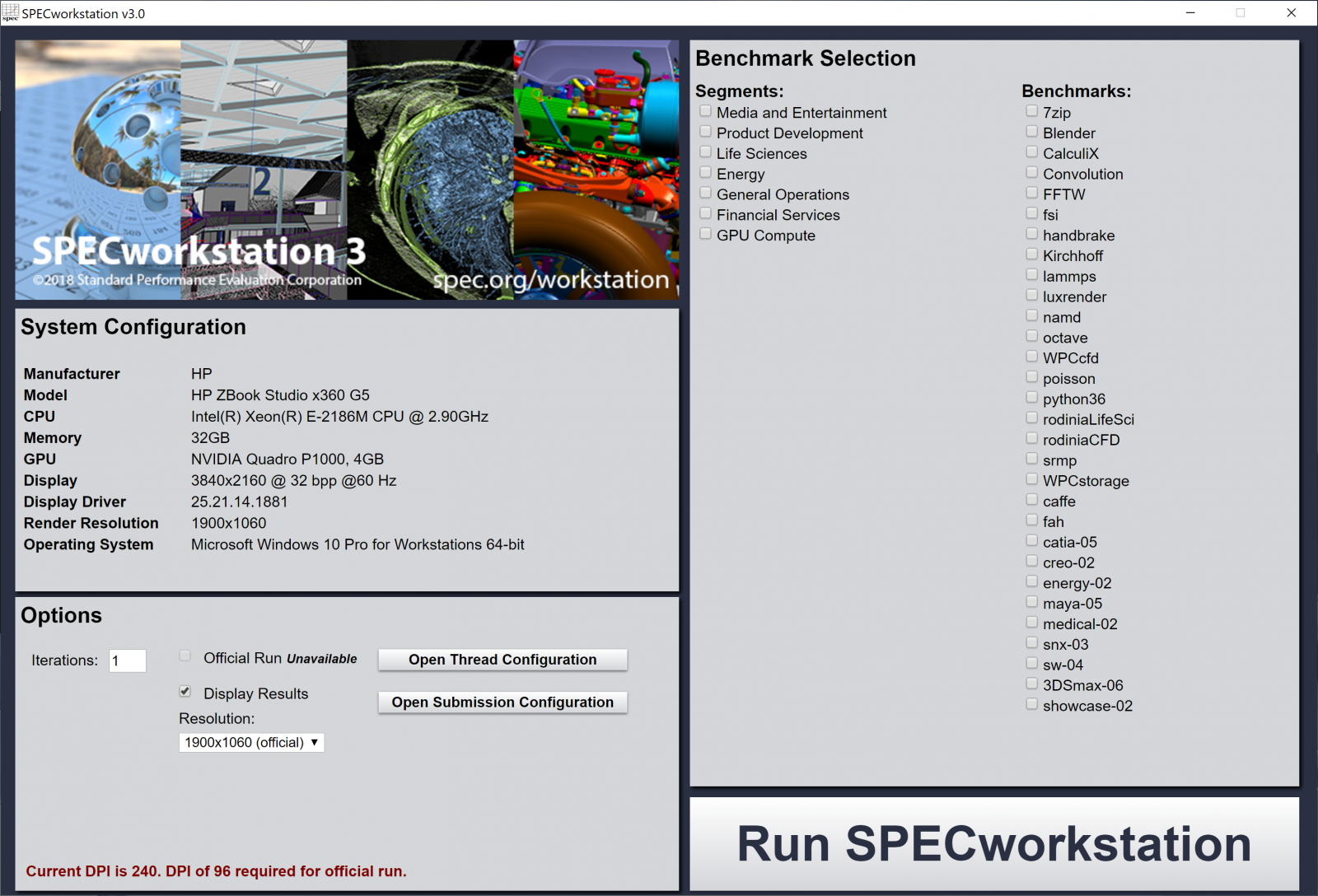 Here, the x360 again out-classed the HP ZBook x2 G4 in every category with the exception of General Operations where it was edged out by a tenth of a point.

HP’s ZBook Studio x360 G5 is a hybrid mobile workstation that comes packed with powerful components in a small footprint. Users can choose from Intel Core i9 or Xeon processors, up to 64GB of DDR4 non-ECC SDRAM, up to 2TB of NVMe storage, and up to a NVIDIA Quadro P2000 GPU at top specs. Though the workstation can be outfitted with more cost-effective components and still be powerful. The HP ZBook Studio x360 is ideal for 3D developing, architecture, and design

For performance we ran our new barrage of graphic and resource intensive tests and compared the ZBook x360 to a ZBook x2 (the x2 was retested with the new benchmarks). To no real surprise, the ZBook x360 was able to out perform the x2 in just about every category, in every benchmark. In SPECviewperf 13 the x360 was able to double the x2 in come cases (though the x2 had a Catia score of 200.53 compared to the x360’s 77.58). In SPECworkstation the x360 was able to perform roughly 1.5 times better in most benchmarks. In our ESRi benchmarks the two workstations had similar drawtimes but the x360 had dramatically better Average FPS and Minimum FPS in Philly and Montreal, with the x2 performing much better in Portland.

The HP ZBook Studio x360 G5 is an ideal choice for a worker on the go that needs lots of performance but doesn’t want to lug around one of the larger mobile workstations. The x360 can easier be configured up or down depending on budget and needs.