The ZBook 15 G6 is the newest addition to the company’s power-driven mobile workstation line. The next-gen HP laptop features a range of upgraded hardware over the G5 model, including the latest 9th Gen Intel Core i9 and Xeon Processors (for complex, multithreaded applications), a generous 128GB of RAM, and three GPU options including the new NVIDIA Quadro RTX 3000. The new ZBook can also be outfitted with up to three 1TB PCIe Gen 3 x4 NVMe TLC SSDs and features a wide range of connectivity including 3 USB 3.0 ports, 2 USB Type-C ports (Thunderbolt 3  + DP 1.4 + USB 3.1 Gen 2) and an HDMI port.

The ZBook 15 G6 is the newest addition to the company’s power-driven mobile workstation line. The next-gen HP laptop features a range of upgraded hardware over the G5 model, including the latest 9th Gen Intel Core i9 and Xeon Processors (for complex, multithreaded applications), a generous 128GB of RAM, and three GPU options including the new NVIDIA Quadro RTX 3000. The new ZBook can also be outfitted with up to three 1TB PCIe Gen 3 x4 NVMe TLC SSDs and features a wide range of connectivity including 3 USB 3.0 ports, 2 USB Type-C ports (Thunderbolt 3  + DP 1.4 + USB 3.1 Gen 2) and an HDMI port. 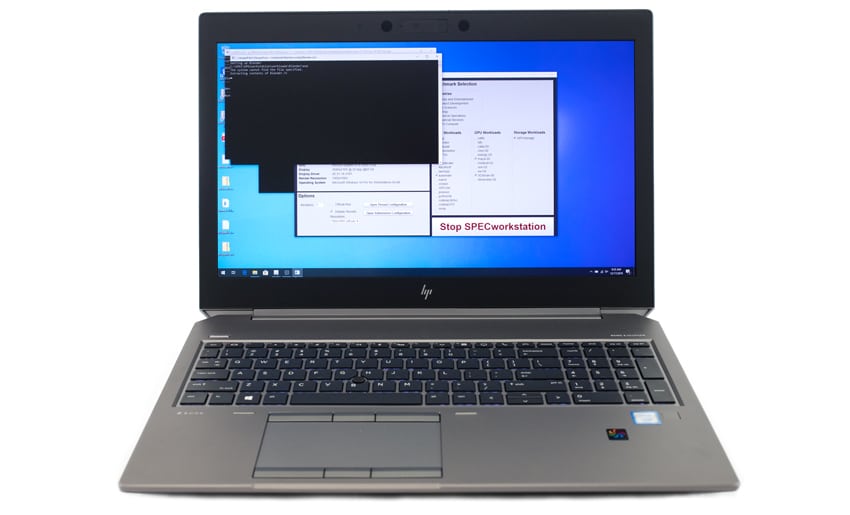 Though you can certainly equip the workstation with an impressive set of components, those looking to spend less can tone it down and customize their build to fit a range of budgets. For example, the ZBook 15 G6 features a wide range of storage options, such as M.2 PCIe, M.2. SATA and 2.5-inch SATA SSDS, while graphics also include lesser options like the Intel UHD Graphics 630 and NVIDIA Quadro T1000 and T2000 cards.

The ZBook 15 G6 also comes equipped with a lot of useful functionality for those who often find themselves in virtual meetings and collaboration scenarios, or simply for those who use multimedia features for personal use. For example, the HP Privacy Camera physically covers the camera when it’s not in use, while the HP Collaboration Keyboard allows users to easily adjust the volume, join/end a call, and mute/unmute people. The ZBook 15 G6 also supports a 3rd microphone designed to pick up other people’s voices in a meeting room, which can will benefit from HP’s ambient noise cancellation technology.

At 5.79lbs (weight will differ depending on components) and just 1-inch thick, the durable ZBook 15 G6 is highly portable and will fit in pretty much any carrying bag. It also features an nice aluminum build with a slick metallic finish. 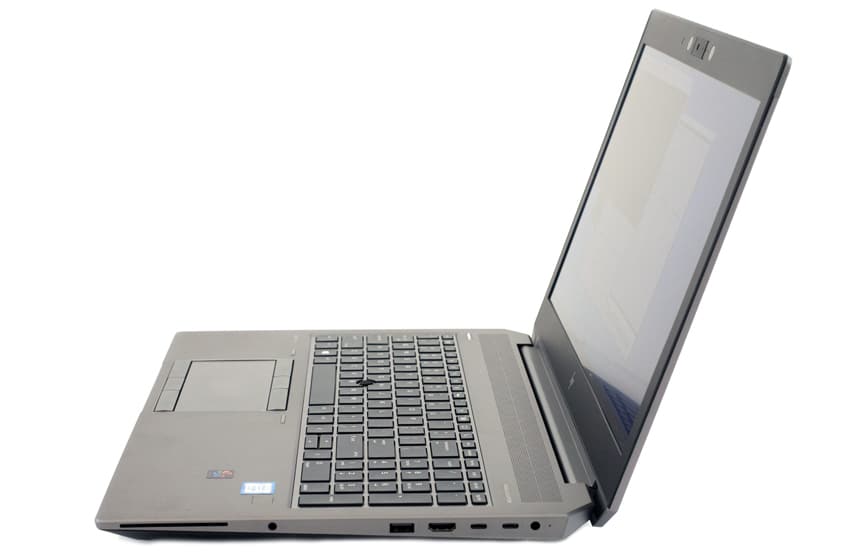 On the left side of the ZBook is the Security cable slot, RJ45 port, two USB 3.0 ports (one for charging), and an SD Card Reader. Turning it around to the other side reveals the Smart Card Reader, Headphone/Microphone Combo, a USB 3.0 port, an HDMI port, two Thunderbolt (USB-C) ports, and the power connector.

Facing the screen shows the backlit keyboard, which features the HP Collaboration Keyboard for easy access to volume adjustment, joining/ending a call, and muting/unmuting people. The touchpad features 3 select buttons on both the top and bottom, with 2-finger scrolling and 2-finger zoom (pinch) on the center pad itself. There’s also a color collaboration sensor for those who have the HP DreamColor display option. Unfortunately, the touchpad itself doesn’t click, only the buttons do. This can be a bit annoying and can slow down workflows for those who don’t use a mouse. It’s definitely and old-school design.

Along the top of the display is the web cam w/ Privacy Camera Shutter (a physical shutter the can be manually slid over the camera to protect users from malicious surveillance), an infra red camera and the HP World Facing Microphone.

The bottom of the G6 workstation shows horizontal ventilation along the top, as well as the tool less access lock and keyboard liquid drain hole.

As expected, the screen is bright and beautiful and is perfect for those working in areas such as content creation and design.

The most powerful GPU option is the NVIDIA Quadro RTX 3000. This PCI Express 3.0 x 16 professional graphics card is powered by the NVIDIA Turing architecture and the NVIDIA RTX platform, which allows designers and artists to leverage hardware-accelerated ray tracing, deep learning, and advanced shading. It features 6GB of GDDR6 and is equipped with 2,304 CUDA Parallel-Processing Cores. Though it’s the entry level model of the RTX line, it still packs a serious punch and is roughly on par with the GTX 1080 desktop GPU.

To see what the HP ZBook 15 G6 can do, we put it through three resource-intensive tests. These tests are also designed to gauge the capabilities of the equipped Quadro NVIDIA Quadro RTX3000. We will be comparing it to the HP 14u G6 workstation. This is less of a which is better, and more of a what to expect comparison. For example, the 14u comes equipped with an Intel Core i7-8665U CPU, 32GB of DDR4 2400MHz of RAM, and an AMD Radeon Pro WX32000 (4G VRAM) GPU.

The ZBook 15 G6 recorded very impressive results, while the 14u performed well for its class and price point.

The HP ZBook 15 G6 is power-driven mobile workstation that has proven to us that it is capable of effectively running virtually any resource-intensive professional application that comes its way. The new ZBook is a noticeable improvement over the previous G5 generation, as it features more powerful processors, better professional graphics, and more maximum RAM. It also features a brilliant 100% Adobe RGB UHD display and built in collaborative features for professionals who do a lot of on-site and virtual conferencing. Outfitting the ZBook 15 G6 can get seriously expensive, but well worth it if you have the budget. Top of the line build includes an Intel Xeon processor, up to 128 GB nECC DDR4 (2667 MHz), up to 2x 2TB NVMe SSD storage, and an NVIDIA Quadro RTX3000 (6GB memory).

As for its performance, we compared the HP ZBook 15 G6 to the HP ZBook 14u G6 to show what both workstations. Though certainly not in the same class, the results will help potential buyers decide which best meets their needs: a more budget-friendly workstation aimed at entry to midrange users, or a more expensive notebook geared towards upper-range, content professionals that need high-end components. Looking at ESRI ArcGIS Pro performance, the ZBook 15 G6 showed impressive scores with average FPS and Minimum FPS in all three of our tests, sometimes more than quadrupling its performance over the 14u.  SPECworkstation3 and SPECviewperf 13 told a similar story, as the G6 ZBook scored some seriously high marks. Of course, users will have to spend quite a bit if they want to see these same results, as our test-model would cost roughly $4,400.

While our comparisons definitely wasn’t apples to apples, comparing a modern Z-Series with a 14u, it is interesting to see the performance difference that the NVIDIA Quadro RTX 3000 (and a system that supports) it can bring. Users in the market for a machine that can deliver tremendous performance for their graphic needs, can hedge a safe bet with the HP ZBook 15 G6.