HP has released the ZBook 15u G5, the 5th generation of their popular mobile workstation line. Announced back in April of this year, HP describes the 15u G5 as an entry-level, performance-driven workstation that is ideal for professionals on the go, which is pretty much in line with other 15u models we looked at over the past few years (we found that they are generally solid mobile rigs that offer a good bang for their lower price tag). The new 15u is highlighted by an optional 4K, touch display, quad core Intel Core processors and 3D professional graphics, all packed inside a thin mobile workstation.

HP has released the ZBook 15u G5, the 5th generation of their popular mobile workstation line. Announced back in April of this year, HP describes the 15u G5 as an entry-level, performance-driven workstation that is ideal for professionals on the go, which is pretty much in line with other 15u models we looked at over the past few years (we found that they are generally solid mobile rigs that offer a good bang for their lower price tag). The new 15u is highlighted by an optional 4K, touch display, quad core Intel Core processors and 3D professional graphics, all packed inside a thin mobile workstation. 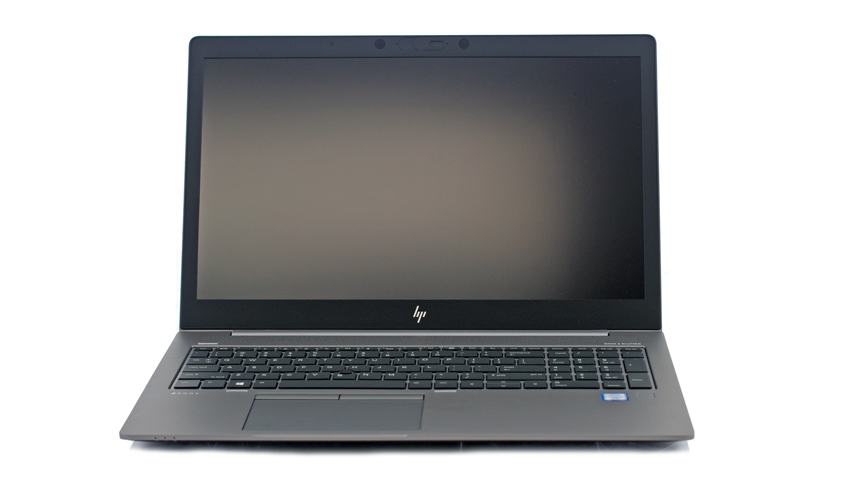 The 15u G5 is powered by an 8th generation Intel Core CPU ranging from high end options (an i7 with 1.9 GHz with up to 4.2 GHz using Intel Turbo Boost Technology, 8 MB cache and 4 cores) to lower end models (an i5 with 1.7 GHz base frequency, up to 3.6 GHz with Intel Turbo Boost Technology, 6 MB cache, and 4 cores). Like previous HP workstation, the 5th gen ZBook is also compatible with HP’s Z Turbo Drive G2 SSD (256GB, 512GB and 1TB capacities), allowing for some major performance gains over standard SSDs, which are also available depending on budget and needs.

Though a bit lacking In the graphics department compared to higher-end mobile workstations, the optional AMD Radeon Pro WX 3100 Graphics with 2GB of dedicated GDDR5 should be enough to satisfy its intended use cases; this isn't a workstation for graphics/CAD designers or videographers.

Weighing in at just 3.89 pounds and measuring 18.6 mm thin, the ZBook 15u G5 is certainly one of the more portable premium mobile workstations around. It features a metallic finish and has a sleeker look then the previous generation, which weighed 4.18 pounds at 19.9 mm thick. 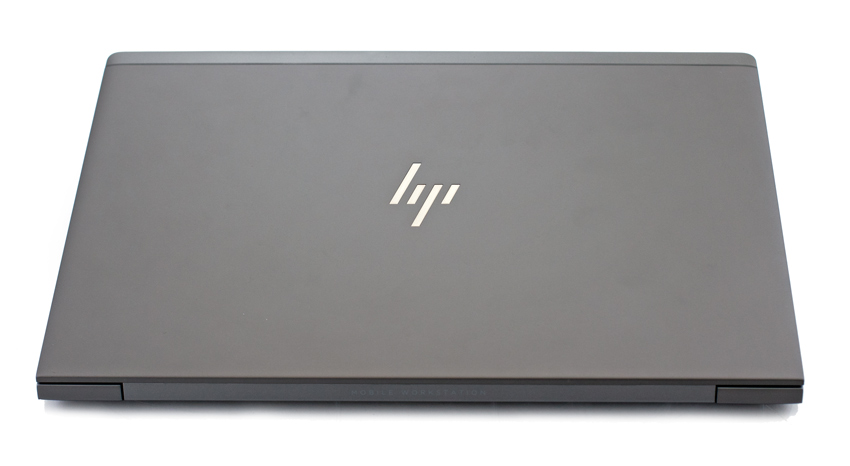 The screen and keyboards feature the functionality common of most modern workstations; you have the usual internal microphone and webcam are located just above the display. Moreover, the TouchPad features a Near Field Communications (NFC) tapping area and antenna (if you choose a specific option in your build), which allows users to wirelessly share information when you tap it (located at the top right area) with an NFC-enabled device. Users also have the option to log on to Windows via Fingerprint reader. 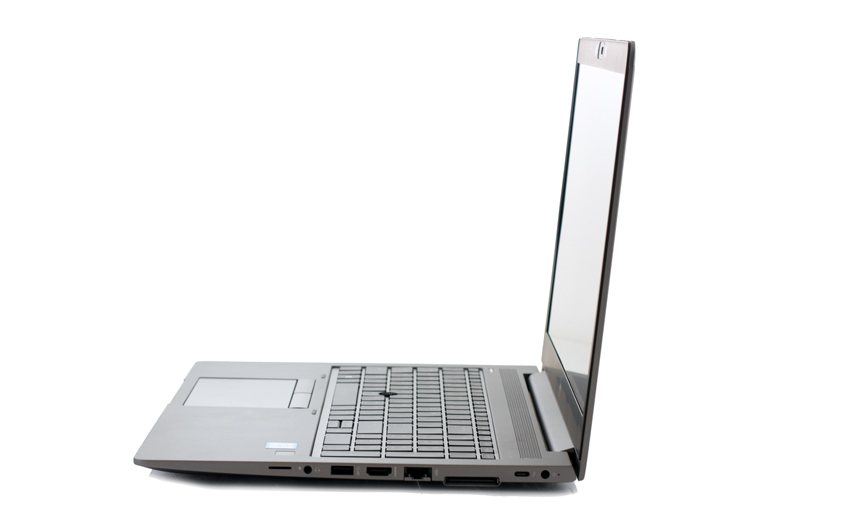 The sides of the 15u G5 are home to the majority of the connectivity and features the usual suspects as well. On the right is a SIM card slot, an audio-out/Audio-in combo jack, a USB 3.x SuperSpeed port, an HDMI port, an RJ-45 jack, a docking connector, a USB Type-C SuperSpeed port and DisplayPort, a USB Type-C power connector and Thunderbolt port with HP Sleep and Charge, and the power port. The ventilation is located on the left side, along with a security cable slot, a USB 3.x SuperSpeed port with HP Sleep and Charge, and a Smart card reader. 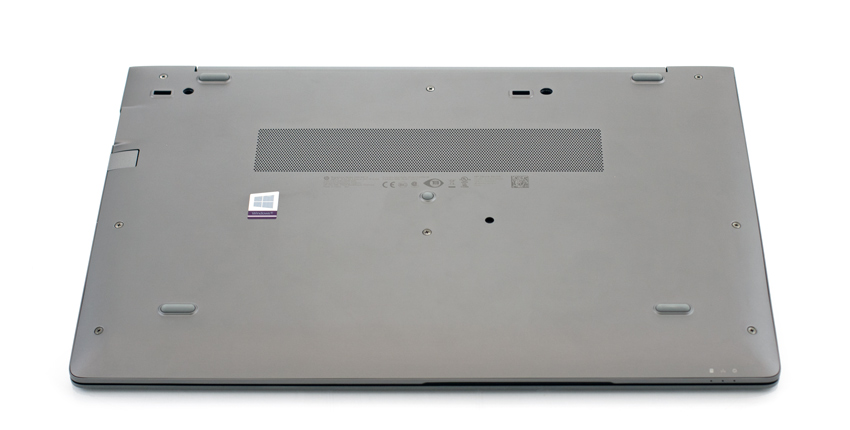 For a bit extra, users can outfit their ZBook with a Radeon Pro WX 3100, an entry-level workstation graphics card. We reviewed this WX3100 roughly a year ago and, though it is not a power-driven professional graphics card, we found that it accelerated professional applications quite well for its inexpensive price tag. We tested it inside the HP Z640 desktop workstation, so it will be interesting to see how it fares in a smaller form factor with more compact components. Nonetheless, the WX3100 is based on the 14nm Polaris GPU architecture and comes equipped with eight compute units (512 stream processors), and 4GB GDDR5 memory (96GB/s bandwidth). It also offers 1.25 TFLOPS single precision compute and includes a DP and two mini DP 1.4 outputs that capable of driving both 4K and 5K displays.

To find out just how well the ZBook 15u G5 performs under resource-intensive workloads, we put the workstation through several benchmarks that are designed to measure how well it performs in specific environments. These tests will also show how well the AMD Radeon Pro WX 3100 performs inside the new 15u G5 workstation.

We will be comparing it the previous generation of the ZBook 15u and 15 mobile workstations, the latter which is a higher-end model.

This first benchmark used to test the 15u G5 is the SPECviewperf 12 benchmark, which is the worldwide standard for measuring graphics performance based on professional applications. SPECviewperf runs 9 benchmarks called “viewsets.” These represent graphics content and behavior from actual applications and include categories such as 3D Max, CATIA, Creo, Energy, Maya, Medical, Showcase, Siemens NX, and Solidworks.

The 15u G5 recorded results ranked lower, placing it behind the previous generation model in most of the viewsets.

Next up is our SPECwpc test, which is a benchmark designed specifically for gauging all of the key aspects of workstation performance, consisting of over 30 workloads related to CPU, graphics, I/O, and memory bandwidth. The workloads fall under broader categories, such as media and entertainment, financial services, product development, energy, life sciences, and general operations, which are an average of all the individual workloads in each category. When equipped with an AMD Radeon Pro WX 3100, the results showed the following results.

Here, the new 15u showed a decent improvement over the last-gen model, which is likely due to performance capabilities of the G4's NVIDA Quadro M2200 versus the G5's AMD Radeon Pro WX 3100.

Using our ESRI benchmark, we look at several aspects of the ArcGIS program; however, we are most interested in the average of the drawtime, average frames per second (Average FPS), and minimum frames per second (Minimum FPS). Looking at drawtime, the new ZBook 15u showed an average time of 02:03.086, while average and minimum FPS gave us a very low 25.37 and 8.75, respectively.

Though customizing the ZBook 15u G5 may seem a bit limited compared to HP's other mobile workstations, this budget friendly mobile workstation still has enough flexibility to satisfy its intended applications. It features up to an Intel Core i7-8550U and 32GB of DDR4 non-ECC memory, and supports a range of different high-performance storage options including the HP Z Turbo Drive G2 PCIe NVMe SSD (up to 1TB). The 15u G5 also comes equipped with the usual connectivity options, including one USB Type-C, which supports Thunderbolt 3, DisplayPort 1.2, and USB 3.1, while offering a decent upgrade in GPU over the previous generation with the AMD Radeon Pro WX 3100.

As far as performance goes, HP's new 5th generation mobile workstation certainly was a mixed bag. In our graphics-intensive benchmarks (SPECviewperf, SPECwpc, and ESRI) we compared it to the higher end ZBook 15 and the previous generation ZBook 15u, both of which were outfitted with some of the highest available components for their specific model. In our SPECviewperf test, the ZBook 15u G4 performed well behind the ZBook 15 and even less than the previous generation model. However, things picked up a bit in our SPECwpc benchmark (which tests CPU, graphics, I/O, and memory bandwidth) where posted decently higher scores than the previous generation of the 15u (though still well behind the higher-end ZBook). Unfortunately it stumbled greatly during the ESRI test, showing draw time, minimum FPS and average FPS scores that were surprisingly low.

Overall, the new HP Zbook 15u G5 had a lot to offer on paper, but didn't exactly hit it out of the park when it came to our application tests. In many areas it fell behind previous generation models, and had plenty of trouble driving more demanding GPU-intensive workloads.