The HP ZBook x2 G4 is the company’s newest addition to their ZBook line. The ZBook x2 G4 makes mobility effortless and is probably the truest form of a mobile workstation we’ve reviewed so far. With its slim form factor and detachable and powerful components, the x2 brings the best of both worlds in performance and versatility. This is because, unlike tablet hybrids like Microsoft’s Surface Pro, the x2 has all components in the tablet itself, so it performs the same with or without the keyboard.

The HP ZBook x2 G4 is the company’s newest addition to their ZBook line. The ZBook x2 G4 makes mobility effortless and is probably the truest form of a mobile workstation we’ve reviewed so far. With its slim form factor and detachable and powerful components, the x2 brings the best of both worlds in performance and versatility. This is because, unlike tablet hybrids like Microsoft’s Surface Pro, the x2 has all components in the tablet itself, so it performs the same with or without the keyboard. 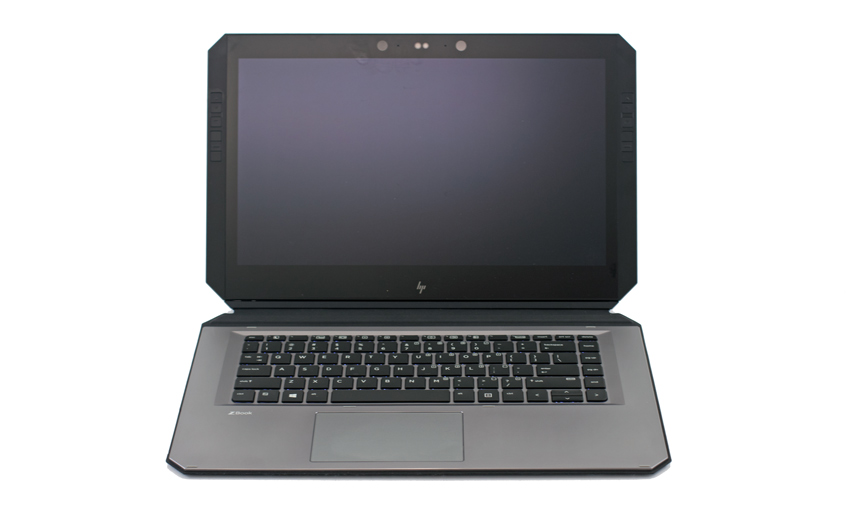 This combination of mobility and performance in a single system can translate into a lot of savings in costs and space, as many creative professionals often have a tablet and a portable workstation. The x2 can do both. HP has also put a huge focus on the screen quality with their new ZBook, with its brilliant matte-like touch display for reduced glare and its multi-touch experience via the surface treatment, the latter which allows for touch glide as well as a “paper-like inking” experience when the pen is used.

The ZBook x2 is a versatile tablet, giving users the option of setting it up in a variety of different ways: Tablet mode, where you can use it as a traditional tablet; detach mode, where you can detach the display but still use the wireless keyboard; dock mode, which allows you to connect the tablet to a monitor; and a laptop mode, which allows users to use the x2 as a traditional desktop. 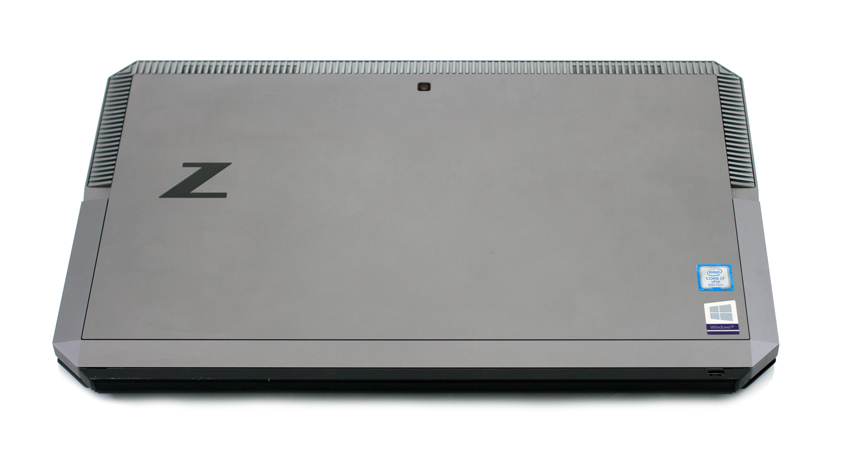 HP has also put a lot of focus into the pen experience, featuring a battery-less design and Wacom EMR technology. EMR offers advantages over other types of pens including high resistance to scratches, continued operation even if the surface area is damaged, and a more accurate simulation of an ink pen’s writing and signing behavior. Moreover, HP claims there is virtually zero latency.

The 14-inch screen features a 4K resolution (3840×2160 @ 32 bpp). It is bright, responsive and easy to read via due to its chemically etched antiglare treatment. Users also have multi-touch functionality via further surface treatment, which allows for touch glide while its textured surface makes for a real-writing experience.

The build of the new X2 is quite unique and comes with quite a bit of functionality. Across the top of the screen are the IR LEDs, microphone, RGB camera, and IR camera. On the left and right are 6 HP Quick Keys on each side, which provide 18 different shortcuts for Adobe apps.

On the left side of the keyboard base is the combo headset, smart card reader, volume up and down buttons, integrated kickstand, security lock slot, and power button. The other side is home to all the connectivity, including the power connector with LED, two Thunderbolt 3 ports, an HDMI 1.3 port, the other integrated kickstand, an SD card slot and the fingerprint reader. The kickstand works by simply swinging out making it feel more like a laptop. 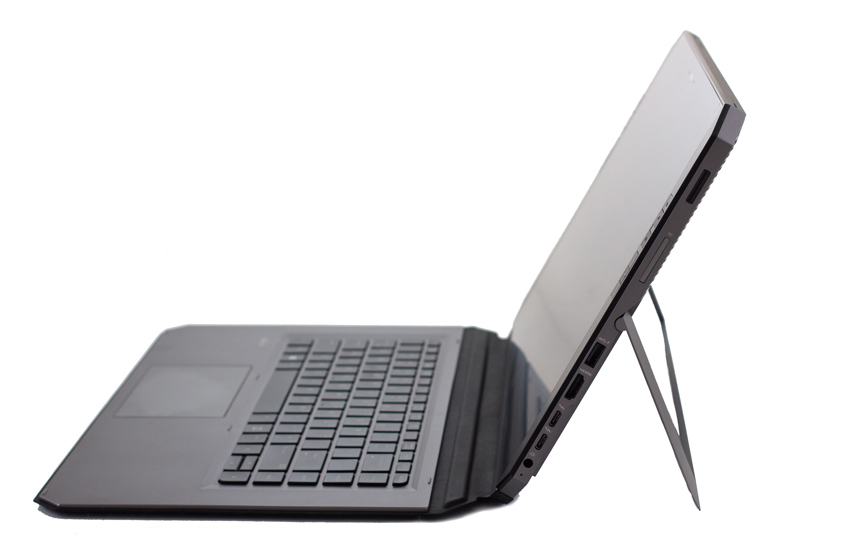 Our build is outfitted with an NVIDIA Quadro M620 professional graphics card that features a Maxwell architecture and 512 CUDA cores. Compared to cards in other workstations we reviewed, this is more of a lower-end model as far as specs go, featuring just 2GB of GDDR5 VRAM. That said, it has been optimized for computer-aided design (CAD), computer-generated imagery (CGI), digital content creation (DCC) software applications via specialized NVIDIA drivers.

To test its performance of the ZBook x2, we ran it through a range of benchmarks that are designed to measure its ability to perform in resource-intensive scenarios and to test what the NVIDIA Quadro M620 performs is capable of when inside HP’s new workstation. We will be comparing the ZBook x2 to the company’s HP Z2 Mini and ZBook 15u mobile workstations.

This first benchmark was the SPECviewperf 12 benchmark–the worldwide standard for measuring graphics performance based on professional applications. SPECviewperf runs 9 benchmarks it calls “viewsets,” all of which represent graphics content and behavior from actual applications. These viewsets include 3D Max, CATIA, Creo, Energy, Maya, Medical, Showcase, Siemens NX, and Solidworks.

Equipped with a Quadro M620, the X2 recorded expected results of a lower-range professional graphics card placing it somewhere in the middle of the other two HP workstations.

We also ran SPECwpc, which is a benchmark designed specifically for testing all key aspects of workstation performance. SPECwpc consists of over 30 workloads that it uses to test CPU, graphics, I/O, and memory bandwidth. The workloads fall under broader categories (average of all the individual workloads in each category) and are comprised of media and entertainment, financial services, product development, energy, life sciences, and general operations. Here, the X2 continued its lower-range performance and again placing it somewhere in between the ZBook 15 and the Mini; however, its general operations score was noticeably impressive.

Using our ESRI benchmark, we look at several aspects of the ArcGIS program; however, we are most interested in the average of the drawtime, average frames per second (Average FPS), and minimum frames per second (Minimum FPS). Looking at drawtime, the new ZBook x2 showed an average time of 00:00:16.97, while average and minimum FPS recorded 60.963 and 18.755, respectively.

HP ZBook x2 G4 is a mid-range workstation that executes a unique combination of performance and mobility due to some intelligent hardware design. This is mostly due to HP’s choice of putting all the components in the tablet itself (and not some in the keyboard), which allows it to boast the same performance with or without the keyboard. Moreover, another smart decision by HP was giving users a variety of different ways to use the x2, including the traditional Tablet mode, a detached mode that separates the screen and the wireless keyboard, a dock mode so you can connect to another monitor and the normal a laptop mode.

Though not as customizable as other workstations we’ve seen, the x2 still offers a variety component choice as well, such as an NVIDIA Quadro M620 or integrated professional graphics cards, 7th and 8th generation Intel i5 and i7 core processors, a maximum of 32GB DDR4 RAM, and a variety of different M.2, PCIe and SATA drives. The new x2 also features two Thunderbolt 3 ports for ultra-fast transferring of large files.

To gauge its performance, we put the x2 through three distinct graphics-intensive benchmarks (the SPECviewperf, SPECwpc, and ESRI tests) and compared it against two other HP workstations, the ZBook 15u and Z2 Mini. We outfitted our build with an Intel Core i7-8650U, 32GB of DDR3 RAM, a Samsung SM961 M.2 NVMe SSD, and, most importantly, an NVIDIA Quadro M620. Looking at the graphics-intensive SPECviewperf test, the x2 recorded solid results, placing somewhere in between the two HP workstations. During the SPECwpc benchmark, which measures CPU, graphics, I/O, and memory bandwidth performance), the x2 showed solid, mid-range performance as well, and even boasted top performance in the general operations and financial services categories. In our ESRI test, we recorded an average drawtime of 00:00:16.97, while average FPS and minimum FPS boasted 60.963 and 18.755, respectively.

While the ZBook x2 certainly won’t turn any heads as far as performance goes, the mobile workstation’s versatility and true mobility are areas where it shines, offering consumers a dynamic workstation with a wide range of use cases.