DL160 includes a few different configurations, such as the small form factor option, which is populated with eight 2.5-inch drives, or the four 3.5-inch drive configuration for people who want a little more capacity in their build. HPE shipped us the model with four drives: two 300GB SSDs for paired boot and two 2.4GB SSDs for the main storage. We will be swapping out these drives with 8 x Toshiba PX04SS 400GB SAS3 SSDs.

Though the DL160 starts at around $800 or $900, it can be configured with outfitted a range of components that will significantly raise the price tag: dual 1st and 2nd generation Xeon Gold Silver and Bronze processors and up to 1TB of DDR4 RAM. Our build includes an Intel Xeon 4110 (8 cores, 2.1 GHz), 16GB of RAM and an E208i-a Smart Array Controller.

This is a compact 1U server with the same build quality and look-and-feel we usually get from HPE. All drives are loaded from the front. In the middle of the front panel is the ID card, while the right side houses the ILO port, USB 3.0 port, LED indicators and power button.

Turning it around, our model shows just a single 500W power supply (as we only have one CPU inside), though there is a slot for another PSU for higher-end builds. There is also a slot for a riser card and support for two PCI cards; one half-height and one full height. At the bottom left are the NICs ports, two USB ports (for keyboard and mouse), and a VGA port.

To access the inside, simply pull the lever on the top of the chassis and slide the cover off. As we mentioned above, this is an entry-level server, so it’s not surprising that it looks pretty barren inside. 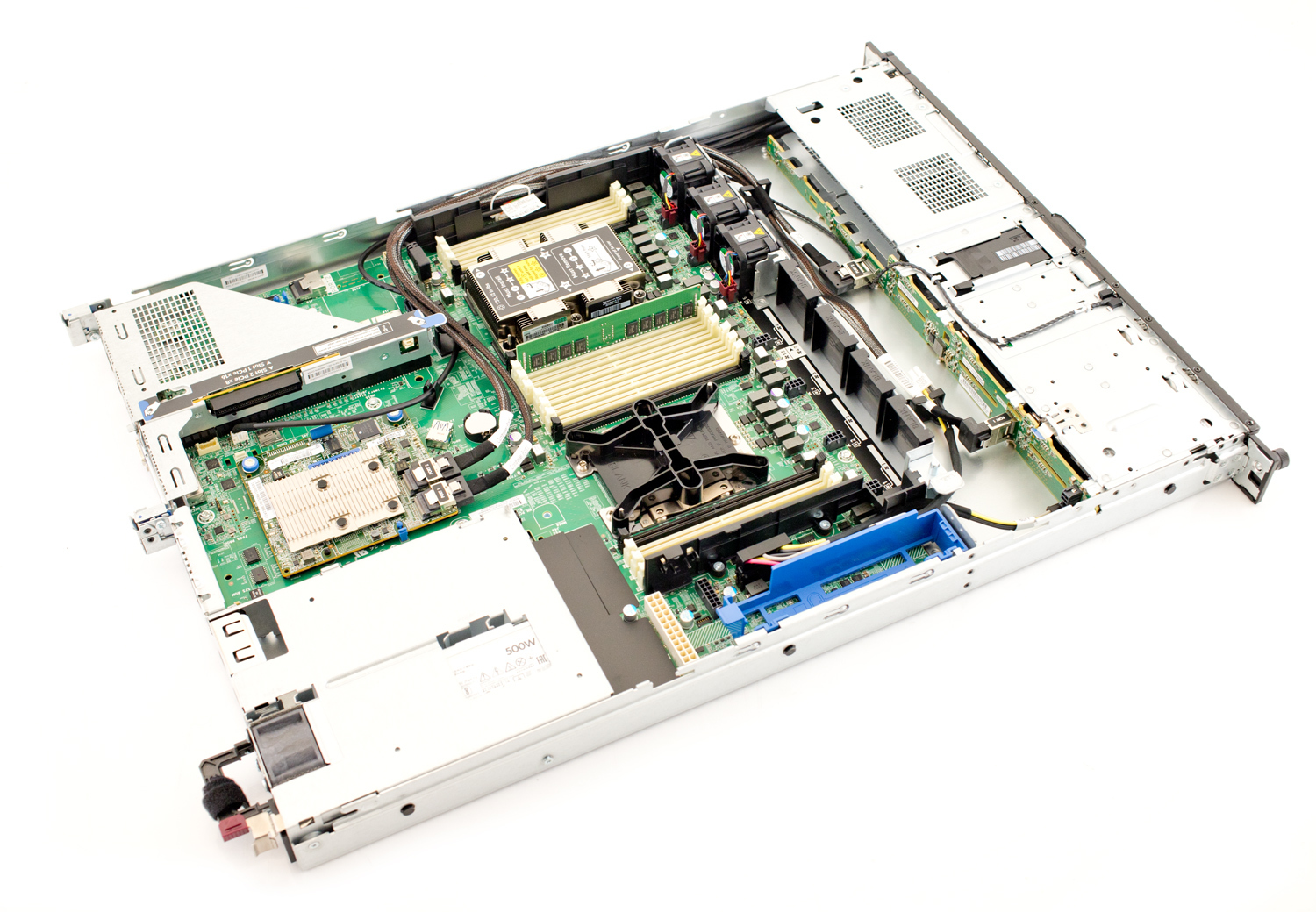 Looking at the front we see the backplane where all the drives are located. For our configuration, there are three fans; however, if we had gone with the dual-CPU configuration, all seven fan slots would be populated. The fans are small (which is normal for a 1U server due to the limited space available) and easily snap into the board for quick installation if you need to add more.

There are plenty of DIMM slots (a total of 12). The model sent to us by HPE only has one of them populated. Looking around further reveals a full RAID card at the back, which is very beneficial for managing the drives. Right next to it are the two PCIe slots, one 16x the other 8x.

It’s quite obvious that there isn’t a lot going on under the hood of the DL160; however, it comes with everything its target demographic needs at a price point around a $1,000. This is very reasonable for the hardware it provides. It also has ILO5, which is the big step up in the Gen10 models, so small businesses will get all of the manageability with ProLiant components.

The HPE ProLiant DL160 Gen10 leverages Integrated Lights-Out (iLO) 5 for management. We’ve done a fairly in depth look at iLO 5 that can be found here. Below are a few points on how it would look on the DL160. 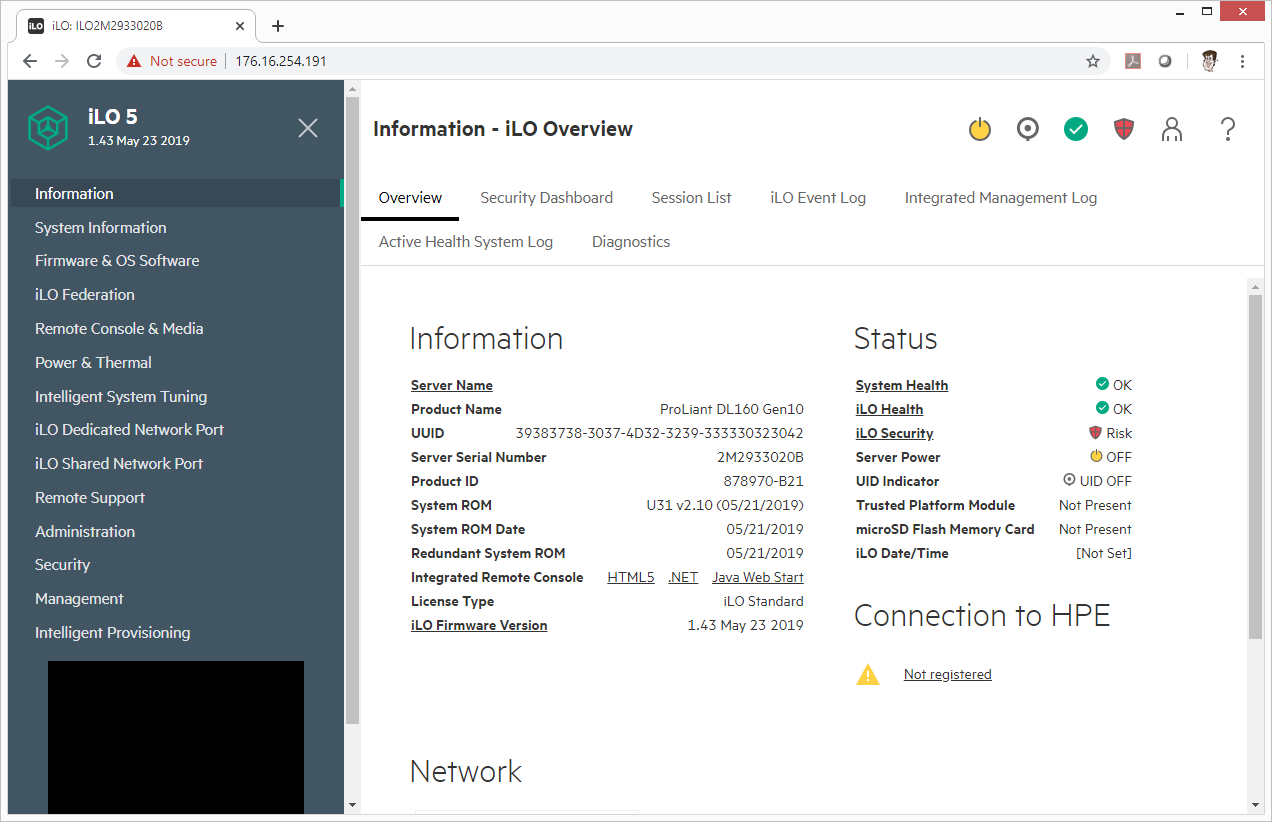 Under Power & Thermal there are various sub-tabs dealing with power usage including Sever Power, Power Meter, Power Settings, Power, Fans, and Temperatures. Here users can power on or off the server and check on various metrics of the system. 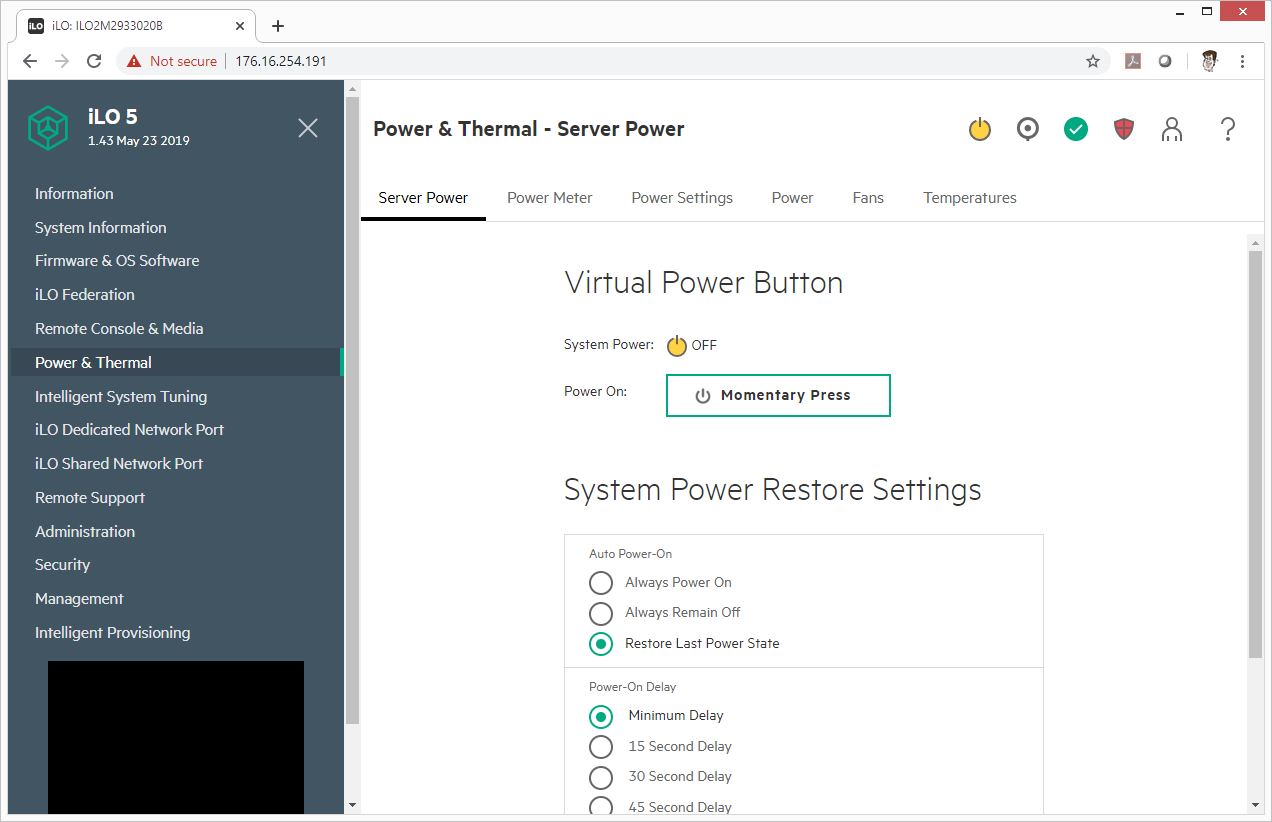 In these times remote support becomes even more important. Under the Remote Support tab, users can connect their device to HPE to help quickly troubleshoot issues. 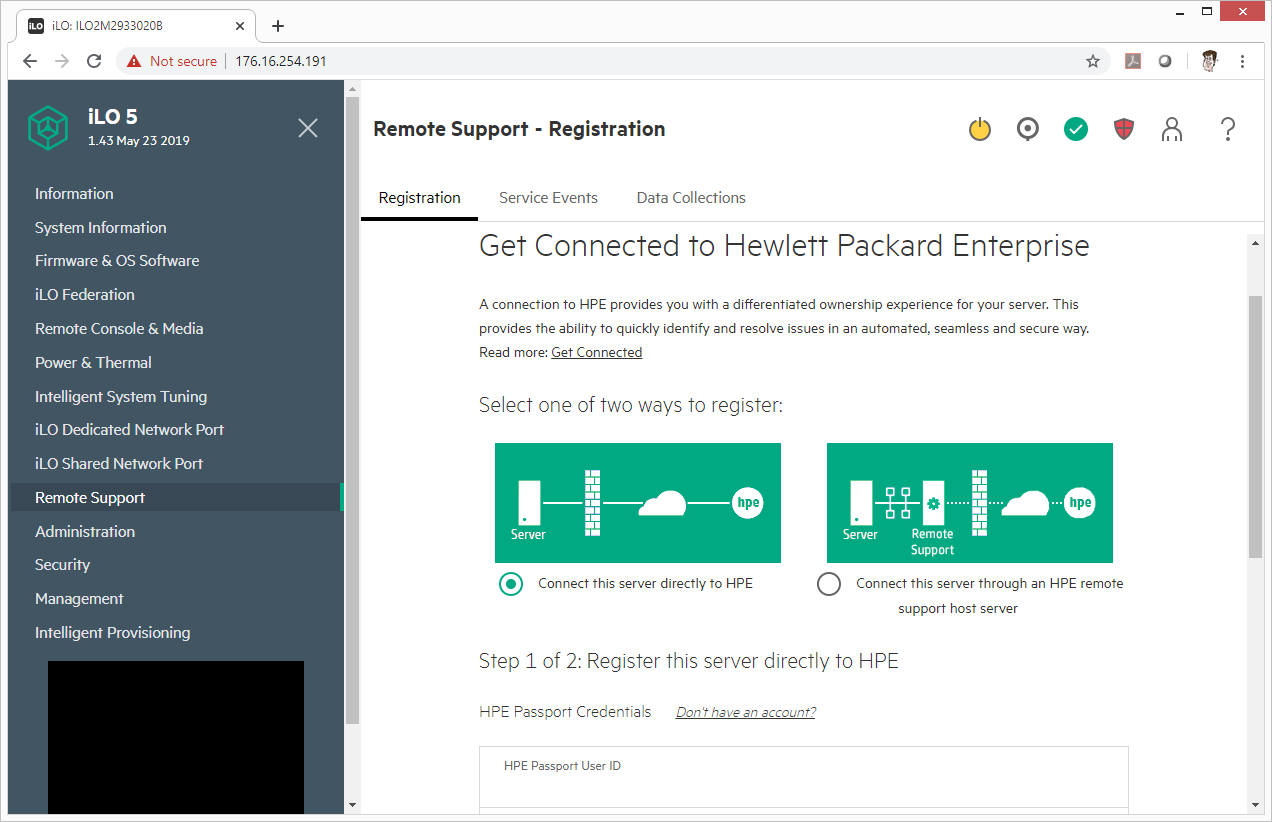 For measuring the synthetic performance of the DL160 server, we outfitted the 2.5″ bays with eight Toshiba 400GB PX04SS SSDs which we tested in JBOD.

Switching over to sequential performance and starting with our 64K read, the DL160 continued its good latency results, showing sub-millisecond performance throughout a majority of the test (only breaking 1ms at just under 99K IOPS or 6.2GB/s. The HPE server peaked at about 105K IOPS or 6.2GB/s at 2.43ms.

For 64K write, the DL160 showed sub-millisecond performance throughout the test until it hit 90K IOPS where it took a major spike in performance, ending at 1.4ms at 79K IOPS.

For Oracle 90-10, the DL160 showed sub-millisecond latency throughout the test, peaking at about 258K IOPS at 687µs latency.

For Oracle 80-20, the DL160 continued its sub-millisecond latency showing, peaking at about 255K IOPS at 689µs latency.

Next, we switched over to our VDI clone test, Full and Linked. For VDI Full Clone (FC) Boot, the HPE DL160 stayed under 1ms for most of the test and peaked at 174K IOPS at a latency of 1.44ms.

VDI FC Initial Login saw the DL160 with sub-millisecond latency performance until about 135K IOPS and a peak of about 139K IOPS at 1.62ms before dropping off a bit.

For VDI FC Monday Login the DL160 had sub-millisecond latency throughout the entire test while peaking at 173K IOPS with a latency of 5.74ms before dropping off a bit again.

For VDI Linked Clone (LC) Boot, the DL160 had sub-millisecond latency performance throughput with a peak of 191,625 IOPS and a latency of 550.4µs.

VDI LC Initial Login saw performance well under a millisecond throughout, peaking at 130,798 IOPS with a latency of 346µs.

Lastly, our VDI LC Monday Login showed the DL160 with sub-1ms performance again, peaking at 131,571 IOPS at a latency of 704µs before.

The HPE ProLiant DL160 Gen10 is a dual-socket 1U server designed for SMBs that have a very limited IT budget. Though it is priced around just 800 to 900 for a barebones model, users can outfit it with dual CPUs (a range of Xeon processors) with a generous amount of RAM (maximum build at 16 x 64 GB LRDIMM @ 2933 MT/s). It also has several storage configurations and can be populated with upwards of 77TB in capacity when using 7.68TB drives in the 8-bay server and the two expansion slots. The DL160 is another entry in HPE’s budget friendly ProLiant line, like the PE ProLiant DL180 Gen10.

Overall, the DL160 performed as expected for an entry-level server. Though it certainly caters to those who don’t need all the configuration and features of high-end models, the DL160 is an excellent choice for small businesses with a tight budget that still want a high-quality offering from HPE.