The Lenovo ThinkSystem SR635 Server is a 1U, single socket server that supports the second generation AMD EPYC CPUs. There are now dozens of servers that support the newer AMD processors, but the SR635 looks to capitalize on the unique benefits that come with the second gen EPYC CPUs. In the case of this little server, one could load it up with up to 2TB of 3200MHz of DRAM and it supports PCIe 4.0 from end-to-end, depending on the backplane installed. The SSR635 can be leveraged for a wide variety of use cases though Lenovo states that it would be ideal for virtualization (VDI), data analytics, and cloud.

The Lenovo ThinkSystem SR635 Server is a 1U, single socket server that supports the second generation AMD EPYC CPUs. There are now dozens of servers that support the newer AMD processors, but the SR635 looks to capitalize on the unique benefits that come with the second gen EPYC CPUs. In the case of this little server, one could load it up with up to 2TB of 3200MHz of DRAM and it supports PCIe 4.0 from end-to-end, depending on the backplane installed. The SSR635 can be leveraged for a wide variety of use cases though Lenovo states that it would be ideal for virtualization (VDI), data analytics, and cloud.

The elephant in the room is PCIe 4.0. This is the new interface up from PCIe 3.0. Currently the only way to get PCIe 4.0 support is through 2nd gen AMD EPYC processor servers (though Intel will get in the game this year) assuming the server has a motherboard that supports PCIe 4.0. PCIe 4.0 has been covered here on StorageReview in the past, but in a nutshell it isn’t just an upgrade, it is twice the performance doubling the bandwidth and channels. There are several PCIe 4.0 devices that can take advantage of this and be added to the SR635 including GPUs, FPGAs, NICs, and certain SSDs such as KIOXIA’s CM6 and CD6.

The SR635 comes with some configurability aside from the expansion slots. As stated above, depending on the backplane users can install PCIe 4.0 NVMe SSDs. Overall the server supports up to 16 NVMe SSDs leveraging front, back, and mid-accessibility. If storage performance isn’t what one is after, they can add four 3.5” HDD bays or a mixture of SATA/SAS SSDs and HDDs.

We did a video review of the server when it came into the lab here:

The Lenovo ThinkSystem SR635 is a 1U sever with a design that is familiar to anyone that has worked with Lenovo server before. A majority of the front of the server is taken up with 2.5” drive bays. Over to the right is the power button, two USB 3.1 ports and a spot for an optional VGA port (from our image above one can see that we didn’t use that option).

Flipping the server around to its butt, on the right are two hot-swap PSUs. The middle holds two more drive bays. Beneath the bays are, going from left to right, the management port, locator LED, a video port, two USB 3.1 ports, a serial port, and an NMI. 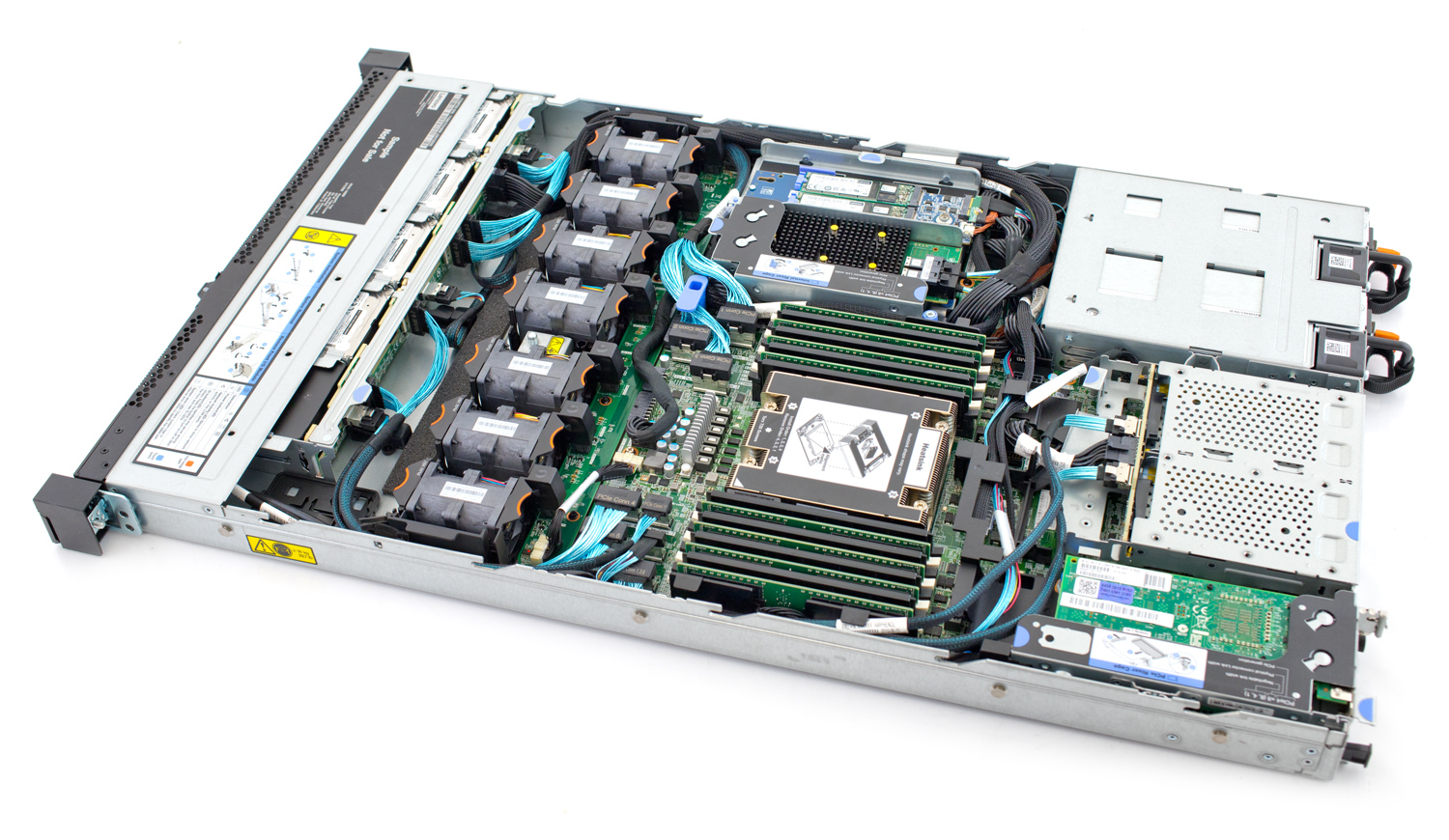 Popping the top off of the server, the first thing that stands out is the single socket and the DRAM on either side of it. Right above the DRAM in the above photo is the RAID adaptor and past that is the M.2 module. Not super easily accessible, but an admin can get to it in under a minute.

Also under the hood are the seven hot-swappable fans. One fails, pop that guy out and pop a new one in and it is ready to go again. Also, here one can see the new backplane we added to PCIe 4.0 support.

Here is a video of us replacing the backplane for PCIe 4.0 NVMe SSDs in the front:

The onboard ASPEED BMC dashboard tab gives users general information such as the various hardware components and their respective health. To the right, there is general system information as well as network information. Users can turn the power switch and FP switch off and on from here as well. 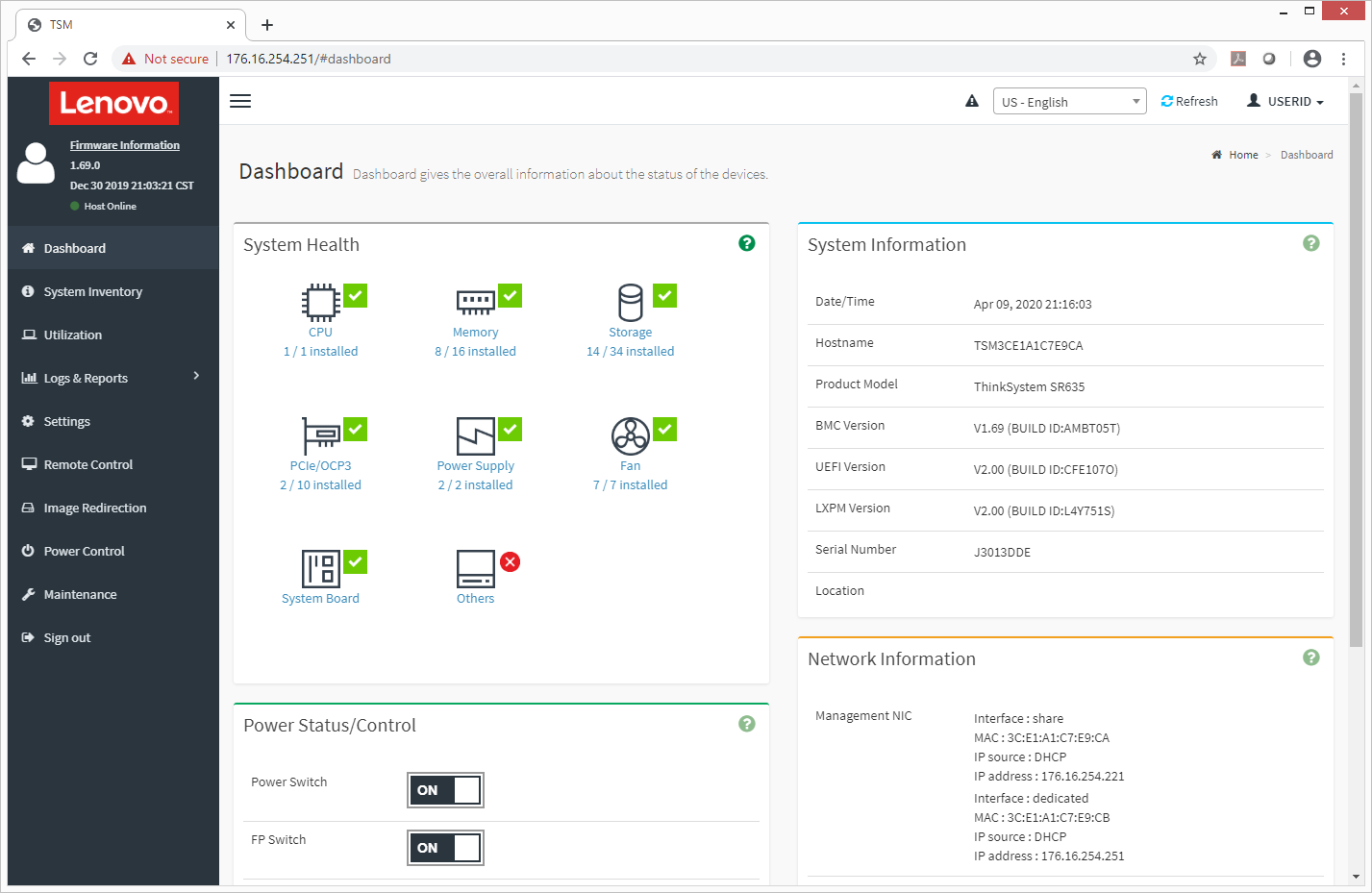 The System Inventory tab is a more in-depth look at the hardware components with information on each including part numbers. 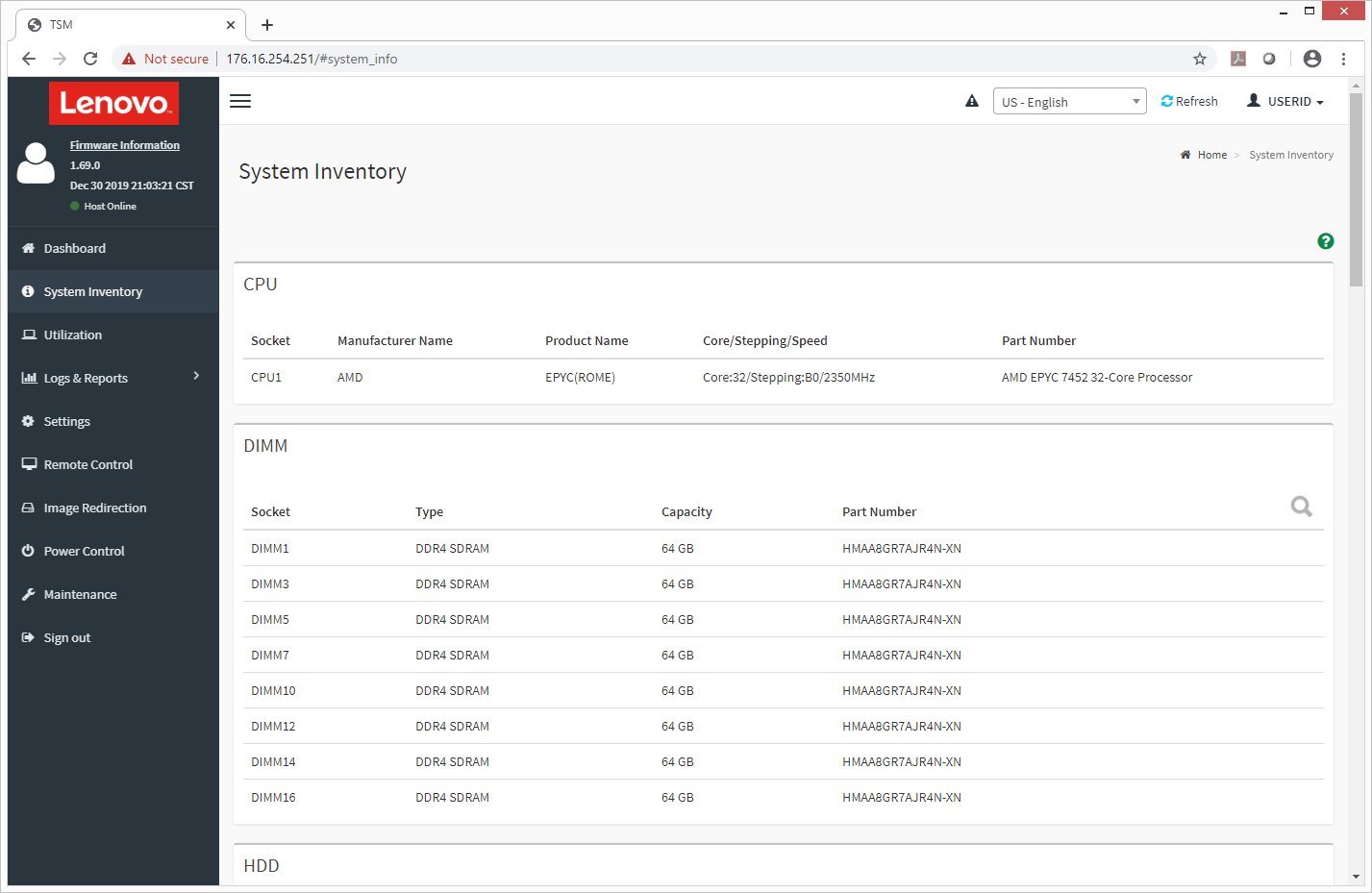 As the name implies, the Remote Control tab enables admins to control the server on various devices. 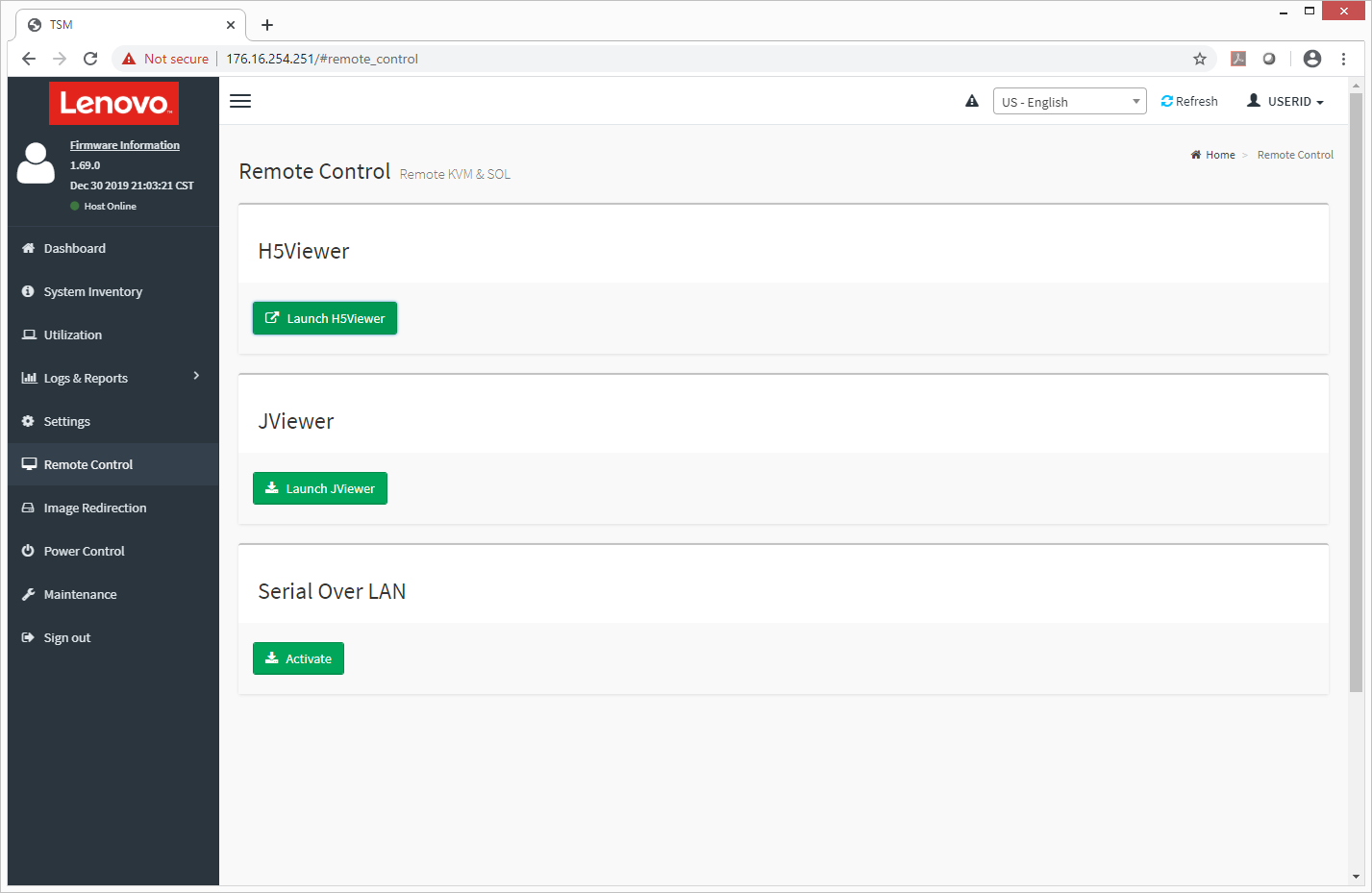 Users can leverage Remote Control when they are adding devices into the expansion slots in the rear. 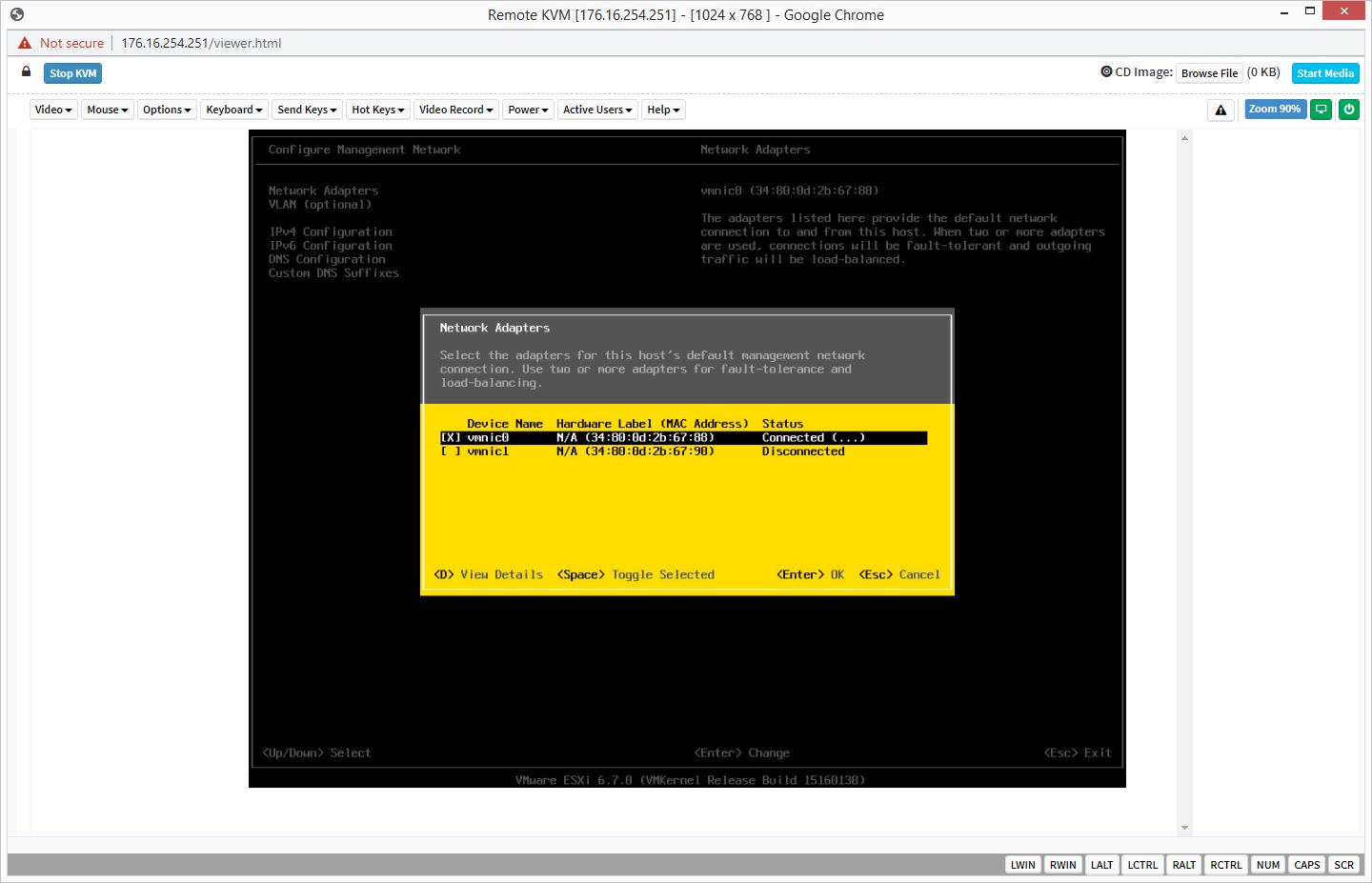 As power usage is important for this guy. Users can dive into utilization to see what is drawing the most power as well as the temperatures of various devices. 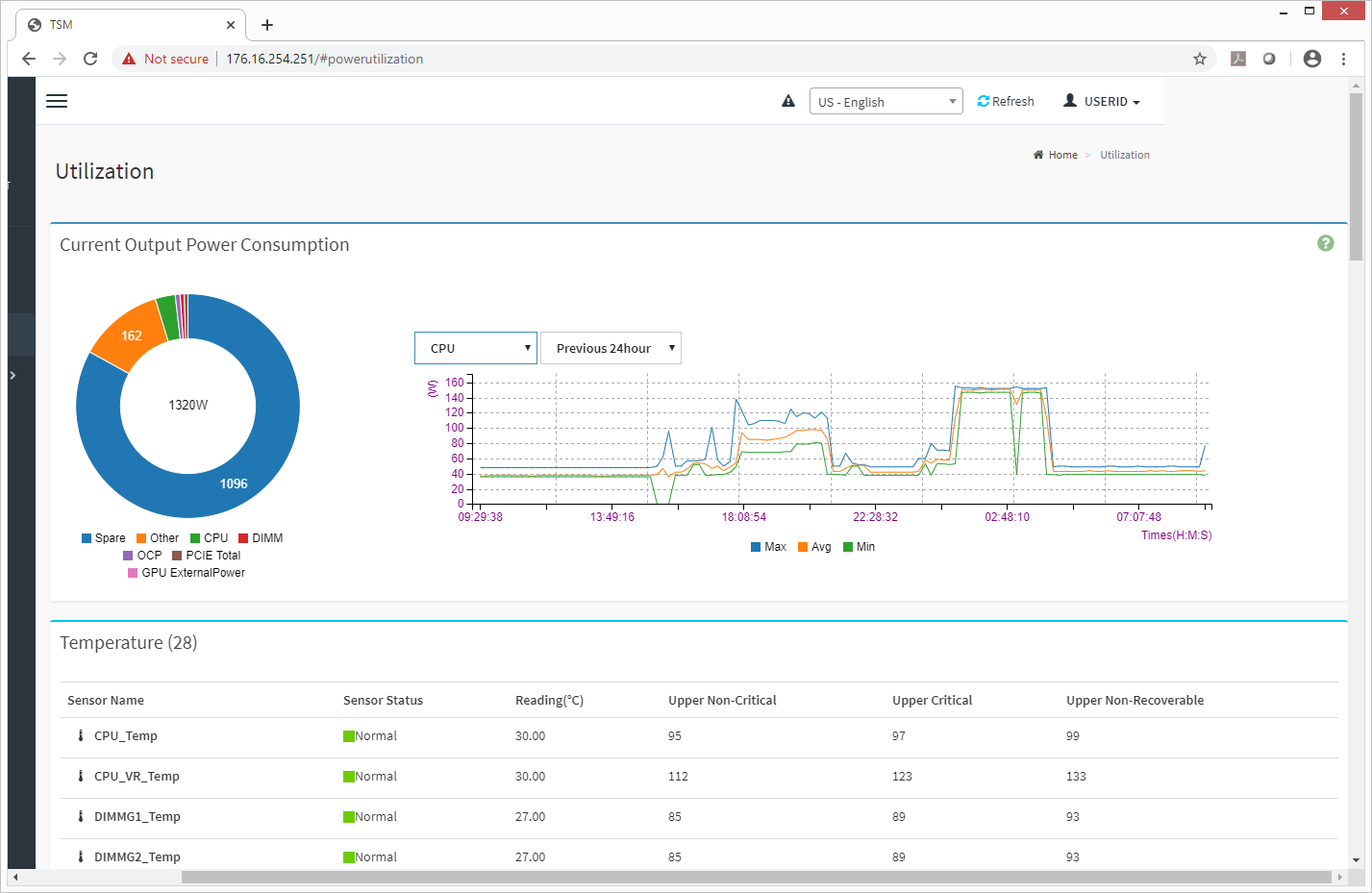 For SQL Sever average latency the SR635 had an aggregate of 3.5ms with individual VMs running from 2ms to 4ms.

For Sysbench average latency we saw the server hit an aggregate score of 21.68ms.

For our worst-case scenario latency (99th percentile) the SR635 had an aggregate latency of 48.03ms.

For 4K random write, we saw another strong peak of about 1.4 million IOPS at roughly 197µs before dropping off a bit.

Next, we switched over to our VDI clone test, Full and Linked. For VDI Full Clone (FC) Boot, the Lenovo ThinkSystem SR635 Server peaked at 1,277,815 IOPS with a latency of 183.5µs before dropping off slightly.

The Lenovo ThinkSystem SR635 Server is a powerful little 1U server. With support for the second generation AMD EPYC processors brings all the benefits that that can bring. Specific to this server, the support for PCIe 4.0 interface. With the correct backplane, the SR635 can support PCIe 4.0 end-to-end, bring the latest GPUs, FPGAs, NICs, and SSDs;  unleashing their full potential. For those that don’t need such extreme power punch, the server can be configured in several different ways from all NVMe to 3.5” HDDs, depending on one’s needs.

With all the PCIe 4.0 build up, we were leading the reader on a bit. There are PCIe 4.0 SSDs working their way into our lab, but for now we leveraged PCIe 3.0 drives in the form of Micron 9300 SSDs. While PCIe 4.0 SSDs could potentially be the next big thing, they are not yet widely available in quantities we need for testing servers. That should change soon however, we will revisit the performance profile of the SR635 as those drives trickle in.

Those that are looking to take advantage of the fastest possible gear in a tiny footprint are in good company with the Lenovo ThinkSystem SR635 Server. The proper backplane can bring end-to-end PCIe 4.0 performance with support for up to 16 2.5″ Gen 4 NVMe SSDs; but as one can see above, broadly available SSD technology also packs quite a punch. The ingenuity and modularity of the Lenovo design is extremely impressive, no other top tier server vendor has anything like what Lenovo has done with the SR635. The fact that so much 2.5″ Gen4 storage can be smashed into this box is astounding, making the SR635 one of our favorite servers and our first Editor’s Choice Award winner of 2020.