The HPE ProLiant DL325 Gen10 one-socket 1U rack profile server is highlighted by its 2nd-gen AMD EPYC 7000 Series processor, which significantly increases performance compared to the previous generation AMD EYPC CPU. It has been a while since we reviewed a server from the ProLiant line (the last being the DL360), so we were eager to get our hands on this thing and see what it can do. As such, HPE has put a huge focus on intelligent automation, security and optimization for its newest iteration of the power-driven server line, adding more cores and faster memory bandwidth. The DL325 also server offers up to 8 SFF, 10 SFF, and 4 LFF drive configurations and 3 PCIe 3.0 slots for further expansion.

The HPE ProLiant DL325 Gen10 one-socket 1U rack profile server is highlighted by its 2nd-gen AMD EPYC 7000 Series processor, which significantly increases performance compared to the previous generation AMD EYPC CPU. It has been a while since we reviewed a server from the ProLiant line (the last being the DL360), so we were eager to get our hands on this thing and see what it can do. As such, HPE has put a huge focus on intelligent automation, security and optimization for its newest iteration of the power-driven server line, adding more cores and faster memory bandwidth. The DL325 also server offers up to 8 SFF, 10 SFF, and 4 LFF drive configurations and 3 PCIe 3.0 slots for further expansion.

Diving into the features and specifications show some significant improvements to the DL325 over previous models. For example, its new AMD EPYC 7xx2 Series 7nm processor allows users to equip the server with up to 64 cores and 128 threads so they can run more multithreaded simulations/single-threaded workloads simultaneously and more effectively. HPE has also indicated faster application performance with memory speeds quoted to reach 2933 MT/s. It also supports S100i Smart Array Controllers and, as we indicated above, up to ten low latency NVMe drives to further drive performance. In addition, the embedded SATA HPE Smart Array S100i Controller comes standard with all builds, giving organizations option to upgrade their server to a 12 Gbps controller. Other bandwidth options include the HPE FlexibleLOM and PCIe standup adapters (from 1GbE to 4x10GbE) so organizations can scale as needed.

As far as security goes, the DL325 has you covered. For example, its “Silicon Root of Trust” in the iLO silicon validates all vital systems, such as firmware, BIOS and software, to ensure a “known good state,” while its dedicated AMD security processor is embedded in the AMD EPYC system on a chip (SoC). This allows the DL325 to support secure boots, virtualization and memory encryption. Moreover, its Run Time Firmware Validation validates the iLO and UEFI/BIOS firmware during runtimes, and will alert users of automated recoveries when it identifies compromised firmware.

The DL325 offers a variety of automation features as well, including HPE’s Integrated Lights-Out (HPE iLO 5 Review) server management technology, which monitors servers for ongoing/remote management, service alerting, and reporting. This allows users to effectively (and remotely) resolve any issues that might arise, so the IT team can manage the servers from anywhere around the globe, driving down operational costs by eliminating on-site visits. Moreover, HPE OneView automates tasks by transforming compute, storage, and networking into software-defined infrastructure, while InfoSight provides a built-in, proactive AI that can anticipate problems before they even occur.

The HPE ProLiant DL325 Gen10 is a one-socket 1U rack profile server, with all functionality and drive access located on the front panel. Users have the option of three chassis types:

Depending on which chassis you choose, the layout of the front panel will be different; for this review, we will look at the 8 SFF configuration. On the right side is the Power On/Standby button and the system power, Health and UID LEDS, as well as the iLO Service Port. Just to the left is the optional media bay (surrounded by the drive bays), while the quick removal access panel is located at the right top corner of the front panel.

This is a solidly build server and access to all main components are quick and easy. 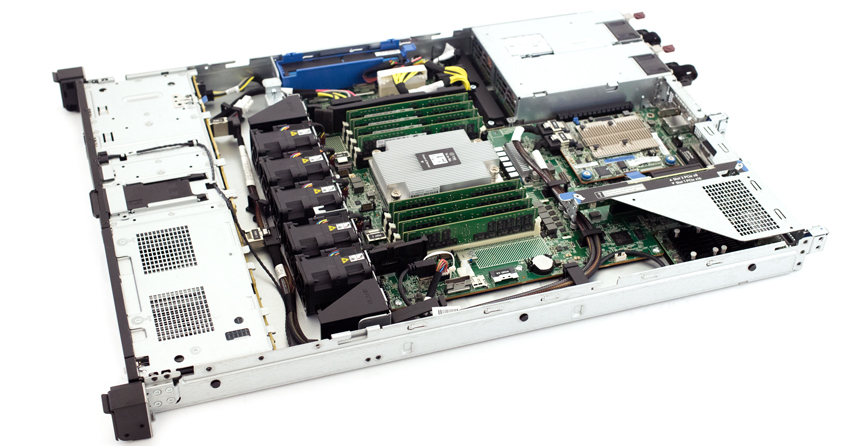 On the inside, we have the fan cages facing the drive bays, which house up to 5 performance hot-swappable fans to keep this system cool and running well. Next to the fans are the DDR4 DIMM slots (up to 16) that surround the processor and heatsink horizontally. Just to the right are the hot plug redundant HPE Flexible Slot Power supplies and the Optional HPE Flexible Smart Array Controller. Below that is the PCI riser, which comes standard, as well as the flexible LOM slot, which is optional.

Along the top of the back panel are the three standard PCIe 3.0 slots (the far right slot being optional) and two HPE Flexible Slot power supply bays.  The bottom houses all the connectivity, including the optional FlexibleLOM (4x 1GbE), VGA port, embedded 4x 1GbE Adapter (if the user equips it), iLO Management Port and dual USB 3.0 ports.

For our synthetic and application testing on the HPE ProLiant DL325 we tested a configuration equipped with an AMD EPYC 7702 CPU, 8 x 32GB 2933MHz DDR4 memory, as well as two HHHL NVMe SSDs giving the platform just under 6TB of high-performance storage. We used VMware ESXi 6.7u3 for the Hypervisor to operate our SQL and Sysbench VMs for testing. 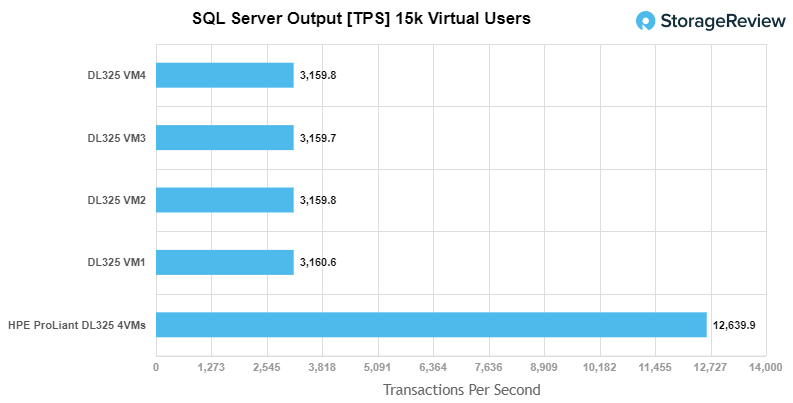 With SQL Server average latency the SR570 gave us an aggregate score of 3.5ms with individual VMs ranging from 2ms to 4ms. 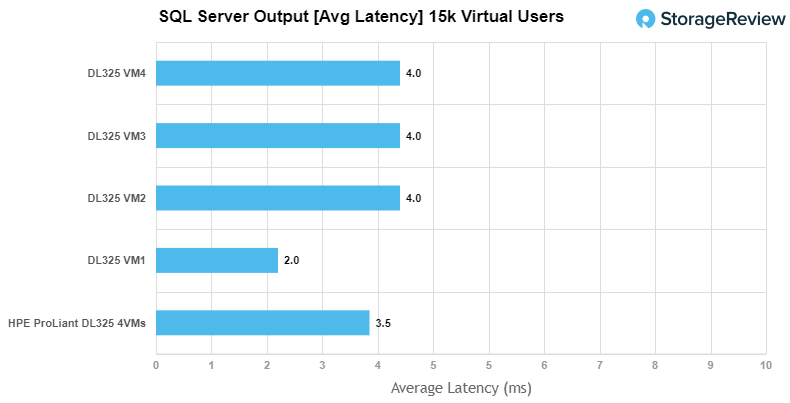 With Sysbench latency the server had an average of 15.87ms.

The HPE ProLiant DL325 Gen10 is a security-focused, one-socket 1U rack server designed to thrive in virtualization and I/O intensive workloads. Centered around the latest AMD EPYC 7xx2 Series processors, the DL325 offers users a variety of useful build options, including up to 10 SFF (all NVMe optional) or 4 LFF drive configurations, as well as up to 3 PCIe 3.0 slots. Both small offices to larger enterprises will find a lot to like here, as this compact server can be outfitted with 2TB of RAM and up to 153TB of capacity, depending on the drive configuration.

For our application workload analysis tests, we equipped the HPE ProLiant DL325 with the EPYC 7702 CPU (64 cores @ 2.0Ghz) and 256GB of 2933MHz RAM, along with two NVMe HHHL SSDs for the performance testing storage. This configuration was able to hit aggregate scores of 12,639.87 TPS and an average latency of 3.5ms in SQL Server benchmarks. In Sysbench, the HPE sever recorded an impressive average TPS score of 8,071.8 with average latency of 15.9ms and worst-case scenario latency of 29.84ms.

We are always glad to see competitive offerings continuing to expand in the enterprise server space, as the HPE ProLiant DL325 Gen10 is a versatile server that can meet the demands of both small and large organizations. Moreover, its 2nd gen AMD EPYC processors offer a strong alternative to the Intel lineup you often see in servers of this class. Currently, pricing or feature comparisons can make either side competitive (AMD vs Intel); however, for licensing cost differences, AMD-based servers are looking very nice for businesses looking to optimize their server platform investment.