The Imation RDX Media Secure Docking Station and its paired RDX cartridges featuring Media Secure Client software provide users with an alternative to tape storage solutions and standard external hard drives used for backup purposes. The RDX Docking Station furnishes users with the speed of USB 3.0 connectivity and the long-term scalability tapes have historically provided. The cartridges have wide-ranging capacity offerings and beyond that, they come in both standard and encrypted models allowing users to choose the features that they need to meet budget or compliance restraints. That said, the Imation RDX Media Secure is positioned for the SMB market and this particular iteration can meet the backup needs of either a workstation or a small server group.

The Imation RDX Media Secure Docking Station and its paired RDX cartridges featuring Media Secure Client software provide users with an alternative to tape storage solutions and standard external hard drives used for backup purposes. The RDX Docking Station furnishes users with the speed of USB 3.0 connectivity and the long-term scalability tapes have historically provided. The cartridges have wide-ranging capacity offerings and beyond that, they come in both standard and encrypted models allowing users to choose the features that they need to meet budget or compliance restraints. That said, the Imation RDX Media Secure is positioned for the SMB market and this particular iteration can meet the backup needs of either a workstation or a small server group. 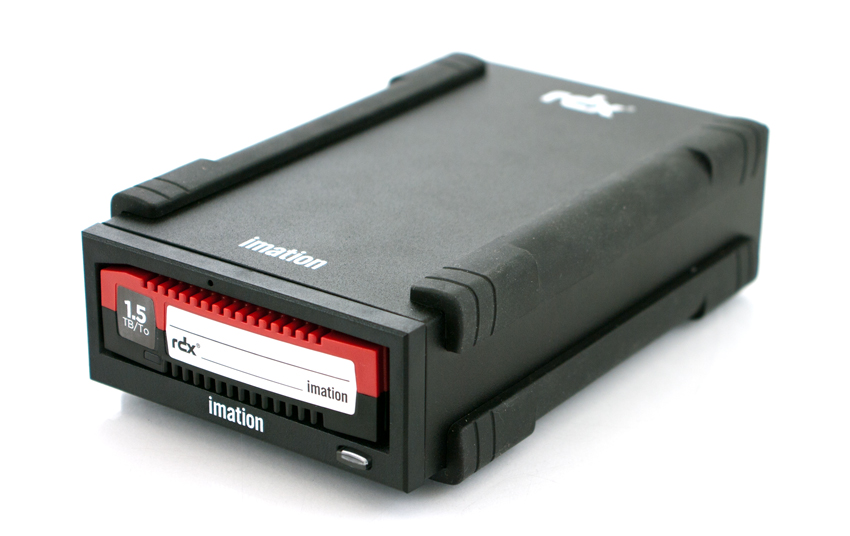 On top of the features already listed, the Imation RDX Media Secure has several other impressive features. RDX media can be used with existing RDX direct-attach docks, and the encrypted models can simply function as unencrypted models when used with systems that don’t have the Media Secure Client software installed. For convenience, the RDX is mounted as a removable drive icon for drag-and-drop backups. Also important for this class, the RDX comes in both external and internal form factors. Our test model is an external device which features an independent power supply for consistent performance.

Imation RDX’s is placed in an existing storage arena that includes the likes of tape drives, external drives, and NAS devices. However, Imation is hedging its bets that a large enough user base will prefer the benefits of RDX Media over those options. While tape is fairly ubiquitous, offers some compression, and  the tapes themselves are rather inexpensive, the dock is an expensive upfront investment and tapes are limited by single read or write activity. External hard drives are a solid option, but the RDX includes impressive software to help back up and monitor data. NAS units also border the RDX’s targeted market by offering users the ability to easily insert and remove drives, including backup software, etc. However, the RDX has automatic encryption and is far easier to transport between branch offices or other off-site facilities. In this arena, users will have to weigh their needs; for those who need encryption, portability, cost-savings, and backup capabilities, the RDX will be on their radar.

That doesn’t even mention that the Imation line provides users with a decent range of products to attain additional scalability. Aside from the internal and external dock, there are also a couple of enclosures for server racks and some other interesting offerings. There are two rack-mountable models: the first is unique in that it offers support for both LTO tape and RDX and the storage library enclosure can hold up to 8 drives (or 12TB). There is also a NAS device that enables users to utilize cloud storage and integrate the RDX into existing storage infrastructure.

Imation RDX docks and cartridges are available now. The cartridges come in various sizes (160GB, 320GB, 500GB, 640GB, 750GB, 1TB, and 1.5TB) with prices ranging from $130-$375 depending on capacity and if the cartridge is encrypted. The RDX external has a street price of $169.95, while the internal runs slightly cheaper $159.95. Our test model is the external dock and we will test both encrypted and unencrypted media.

The Imation RDX Media Secure USB 3.0 external has a sturdy, metal exterior casing supported by four large, protective rubber bumpers on the four side edges. The metal external enclosure feels very solid, but these bumpers just add to that by both protecting and securing the dock from bumps and jolts as well as providing friction to keep the dock firmly in place.

The front housing features a power indicator light which also acts as an eject button. Also front and center are Imation branding and an emergency pinhole eject. The rear of the dock features the power and USB 3.0 plugs as well as a cooling fan that automatically shuts off when cartridges are removed. 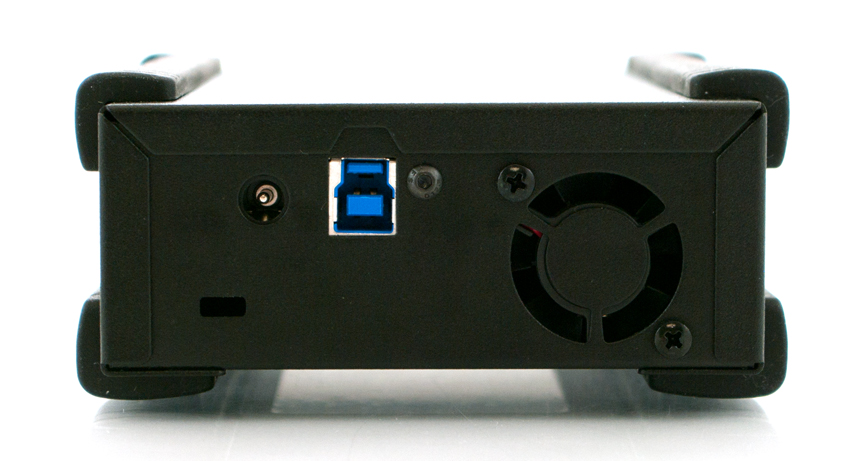 All cartridges are rugged with thick hard plastic and come in two schemes designating their model – red on black or black on black. Standard cartridges are all black, while encrypted models are black on the bottom and red on top.

On the front of each cartridge, there is an indicator light, a label, and a sticker with the capacity of the cartridge. The rear of the unit houses the interface and write protect switch.

Imation’s RDX Media Secure is designed to be exceptionally easy to use. As it is geared toward SMB and marketed as secure to transport, Imation obviously wanted to make it as easy as possible to deploy. Doing so requires little more effort than typically used for a standard portable or external hard drive. Beyond that, the RDX feels far sturdier than portable and external drives and offers automatic encryption, giving it an edge for business and critical data backup use cases.

To set up the dock, users plug in the USB and power cables and then install the included software. Users will want to make sure they have the 32-bit Java version as the media isn’t compatible with Java 64-bit. With the dock set up in just a minute, users are ready to move forward to the cartridges. With a cartridge inserted into the dock, users open up the drive and install the included RDX Secure Media software. 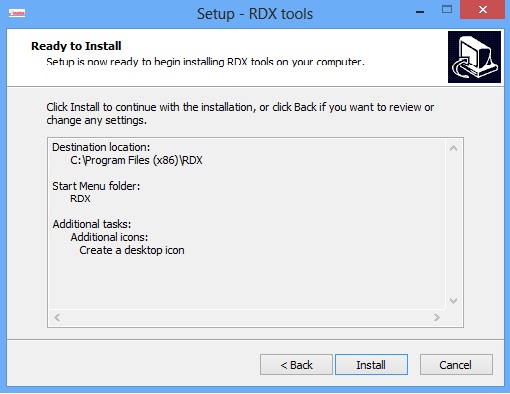 After that, users will be prompted to provide a password that includes at least one numeral to lock and unlock the drive. Incorrect password attempts lock users out of the drive. At this point with a password setup, users are essentially done with the only remaining step being dragging-and-dropping any files to the device. Files will be instantly and automatically encrypted. To assure users of security, RDX media features Cryptographic Erase to erase the encryption key rendering data unintelligble.

Users can optionally install Roxio Retrospect from the included media for free with their included license. Also available is a 45 day trial of Open File Backup (which does what it’s named – protects open or in-use files) and User Initiated Restore (users can restore without backup administrator permissions). To setup Roxio Retrospect, users select under which admin account Retrospect will run or the wizard can automatically select for the user. That’s essentially it for setup with the remaining steps being using the wizard or advanced settings to perform backups, eventually restore, obtain reports, etc.

For backups, the wizard directs users to select which files they want to backup. Then, users are prompted to choose a drive to send the files locally, via optical drive, or in our case, to the Imation RDX Media Secure. Scheduling is the next step, and users can perform a one-time backup or set a schedule choosing days and inputting a time for those days. Overall, it’s a very simple process with software functionality scaled though similar to the kind designed for much more expensive hardware.

Using our Consumer Testing Platform, we tested three RDX capacities to measure relative performance against one another over USB 3.0 interface. The 500GB and 1.5TB drives were RDX Secure encrypted models, while the 1TB was an unencrypted model. First, we measured 2MB sequential speeds, and the 500GB came in with 75.07MB/s read and 74.84MB/s write. The 1TB unencrypted tested at 93.35MB/s read and 87.97MB/s write, while the 1.5TB scored the highest numbers at 112.74MB/s read and 112.27MB/s write.

The drives have performance that compete solidly with one another with each taking a couple of victories along the way to even out and are aligned well in terms of performance we’d expect from traditional USB attached portable storage.

The Imation RDX Media Secure USB 3.0 and RDX media are viable alternatives to traditional tape and portable hard drive based backup and recovery systems. The RDX offers very good speeds with USB 3.0 connectivity and is a completely scalable product that allows enterprise SMB to increase storage at-will utilizing the media’s several capacity steps. Adding to the design’s implied security, RDX media offers users both unencrypted and encrypted models enabling businesses the choice to encrypt only the files in need of doing so.

The Imation RDX is extremely simple to use with a speedy setup, drag-and-drop technology, and an easy driver installation that sets up encryption immediately. The RDX and media have some serious, verifiable build strength as well. Match that with USB 3.0 connectivity for speed and a price that’s extraordinarily reasonable, and the Imation RDX is an obvious choice for businesses looking to phase out older tape systems or upgrade to reliable, rugged media. The ease of deployment also makes the RDX a great option for the single user professional who requires a more robust backup process.

The price point of the Imation RDX Media Secure and the security the device brings to small businesses backing up a workstation or single server make it a good alternative to standard HDDs and tape storage.