As we’ve continued to expand our Enterprise Testing Lab, we’ve needed to look for ways to improve our cooling within the lab environment without the large expense of external cooling units. The team over at Tripp Lite offered us an easy all-in-one solution with its SMARTRACK Series SRCOOL12K, Self-Contained Portable Air Conditioning Unit. The SRCOOL12K is available in 120V (SRCOOL12K) or 230V (SRXCOOL12K) models. The unit offers 12,000 BTU of cooling power that provides adequate cooling for a 500 square foot room. That makes the SRCOOL12K well-suited for our Enterprise Testing Lab’s footprint.

As we’ve continued to expand our Enterprise Testing Lab, we’ve needed to look for ways to improve our cooling within the lab environment without the large expense of external cooling units. The team over at Tripp Lite offered us an easy all-in-one solution with its SMARTRACK Series SRCOOL12K, Self-Contained Portable Air Conditioning Unit. The SRCOOL12K is available in 120V (SRCOOL12K) or 230V (SRXCOOL12K) models. The unit offers 12,000 BTU of cooling power that provides adequate cooling for a 500 square foot room. That makes the SRCOOL12K well-suited for our Enterprise Testing Lab’s footprint. 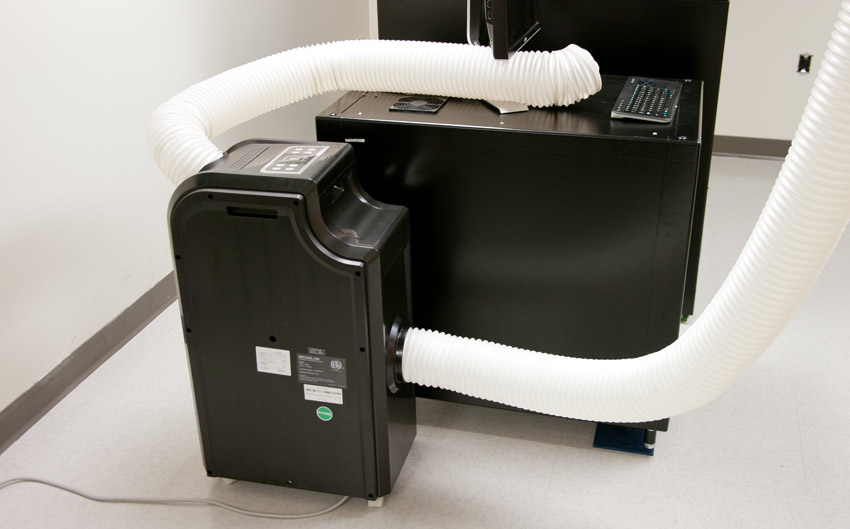 By being self-contained, the unit doesn’t require users to install a drain or constantly empty a water tank, as the unit automatically evaporates condensation and safely removes it through the exhaust. The SRCOOL12K uses environmentally friendly R410a refrigerant, which complies with EPA standards for 2010 and beyond and is accepted worldwide. It contains zero ozone-depleting R22 refrigerant to expand that environmentally friendly platform. The SRCOOL12K not only adjusts ambient room temperatures, but can also dehumidify and filter the air, providing better air quality for enhanced equipment performance with minimal noise and power consumption. The SRCOOL12K also comes equipped with an auto-restart feature that retains all system settings and returns the unit back to its last operational state after AC power is restored. The SRCOOL12K has a street price around $560.00 and the SRXCOOL12K can be found for around $690.00. They come with a 1 year warranty with an option to extend to up to 4 years.

The SRCOOL12K is easy to setup for a portable air conditioning unit. The front view offers a control panel, air filter covers, a drainage outlet, a cool air output vent and cooling duct adapter or louvered vent insert. The rear of the unit features the warm air exhaust outlet, along with recessed handles for the unit.

The control panel provides users with access to the “ON/OFF” button, “MODE” button, Temperature Control, Fan Speed, Timer features. Mode functions allow the unit to switch between Cool mode, Dehumidify mode and Fan mode. The Temperature Control allows you to set the cooling based your needs between 60oF and 900F. Fan speeds can be set on three levels; High, Mid and Low. The Timer feature allows the user to schedule the until to turn on or off for a specific amount of time regardless of target temperature. 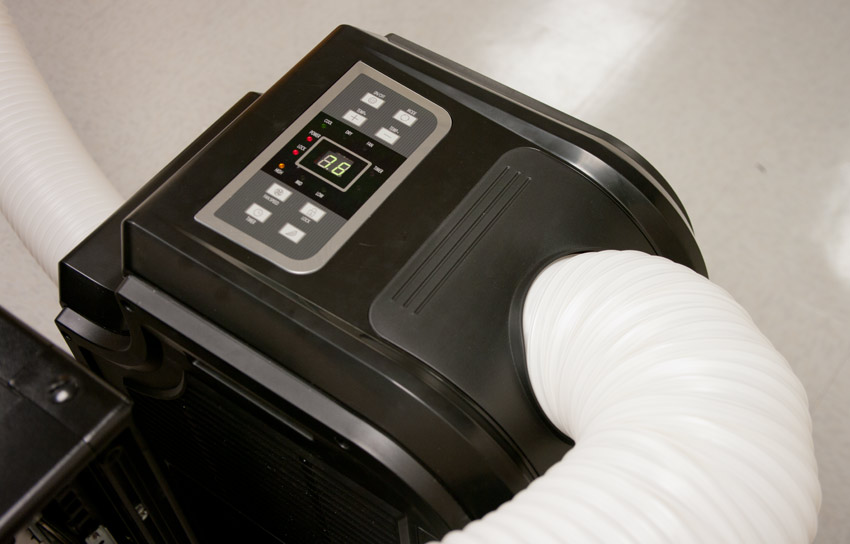 The SRCOOL12K offers two options for how to cool the work space. The first option, which typically comes pre-installed, is the Louvered vent. This just blows cold air into the room, much like your standard air conditioning unit. For the StorageReview labs, we selected the second option which is the cooling duct setup. This provides a more specific directional cooling that can connect directly into the server rack or be pointed at devices. In our setup, we have the duct pointed toward the front of our server racks, which creates a hot and cool aisle much like you would find in a larger datacenter. Cool air comes in through the front and hot air is expelled through the back of the racks and conditioned by the SRCOOL12K.

We looked at our server’s temperatures over a 39 day period – the first 35 days the SRCOOL12K was not running and the last four it was operating. The non-operational 35 days saw a lot of variation with the temperatures of the servers going up and down based on nightly workloads where the building’s conventional HVAC couldn’t keep up. Once we installed and setup the SRCOOL12K, the following four days saw the temperatures flat-line to a consistent 78oF across the workloads. We have the SRCOOL12K temperature control set at 77oF with fan speed at High. The unit is is barely audible over the noise of the servers, but is relatively louder than normal air conditioning units. Tripp Lite rates the unit at 50dB when running at full speed.

In terms of energy usage, Tripp Lite lists rates the SRCOOL12K at 1,250 watts max. During normal operating conditions, we found it to require just over 1,000 watts while operating with the compressor running, which dropped down to 77 watts after the room had reached its target temperature. When set to cooling mode, the fan runs at all times to maintain constant airflow in the room. With a power rate of 10.5 cents per kWH, our power meter has estimated an average monthly cost of $57 to operate the SRCOOL12K based on our workload and target temperature.

With its price to cooling performance, the SRCOOL12K sufficiently met our needs for additional cooling capacity within our Enterprise Test Lab. Offering a middle-ground compared to an expensive mini-split AC system, the SRCOOL12K portable air conditioning unit integrated quickly, without needing a dedicated circuit, drain line, or outside contractors. For small-businesses this type of system can easily save thousands of dollars and be up and running within minutes of delivery. Adding the auto-restart feature that retains all system settings, the SRCOOL12K provided the added peace of mind knowing that our lab won’t over-heat upon startup after a power outage during working or non-work hours.

Just posted a video of our latest Synology NAS in