Last year we had the chance to review two other Intel NUCs; NUC7CJYSa, low priced system powered by an Intel Celeron J4005 processor that we ended up installing IGEL and Wyse VDI client software on and used to connect to our virtual desktops. The other NUC was a more powerful NUC, the NUC8i7BEH, that we installed ESXi on after our review and we used it as an ESXi host for another project that we are working on. Both of the systems have been working extremely well for their assigned roles. This shows the flexibility and range of uses that NUCs can be used for. You can read our review of these systems here, here and here.

Below are the Intel NUC10i7FNH specifications:

The NUC comes packaged in a heavy cardboard box, with the device itself being nested between two black foam blocks and is wrapped in an electrostatic plastic bag. The box also contains a power brick adapter, an offset screw, and quick start, regulatory and safety guides. 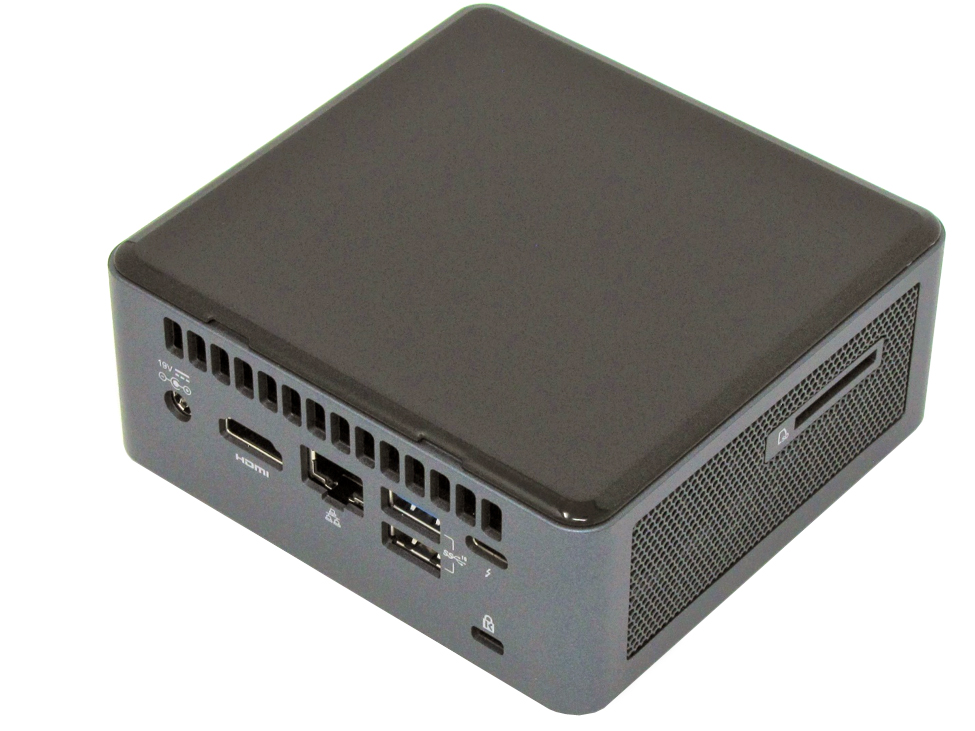 The front of the device has the power button/LED, USB 3.1 port, USB-C port, four DMICS digital microphones, a 3.5mm speaker/headset jack, HDD LED, consumer infrared (CIR) sensor. The left side of the device has an SD card slot. 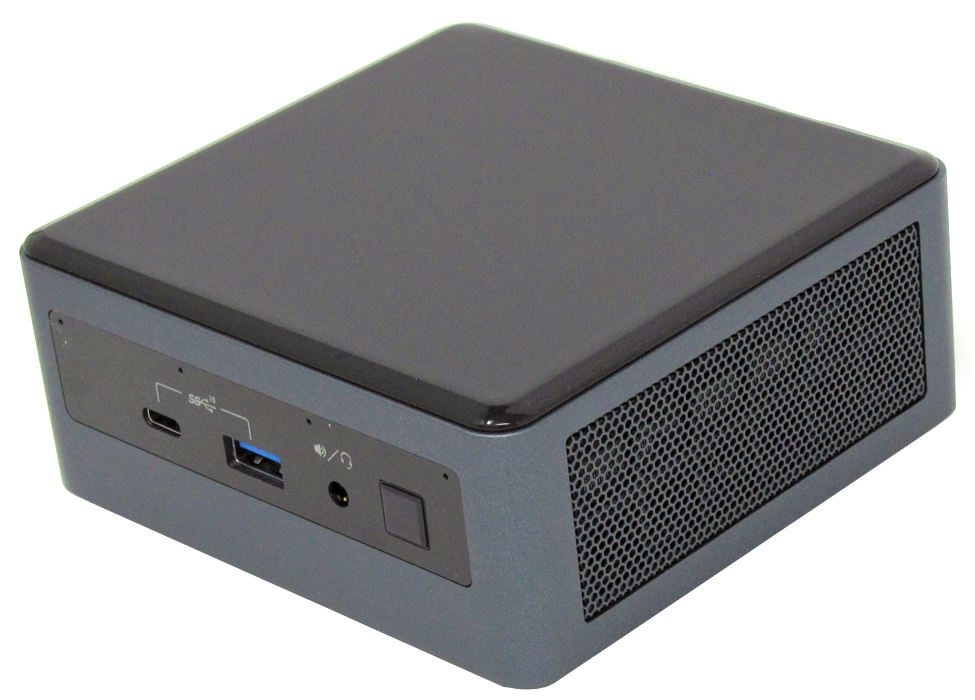 The sides and top of the device’s case are made of strong plastic with inlet metal panels with ventilation holes on the two sides, while the upper third of the back has 14 slots molded into the back for airflow. The bottom of the device is made of metal and has two threaded holes where a VESA mount can be attached. The top of the device has slight indentation and can easily pried off. Overall, the case on this device is very durable and should hold up well in a home, office, or datacenter. 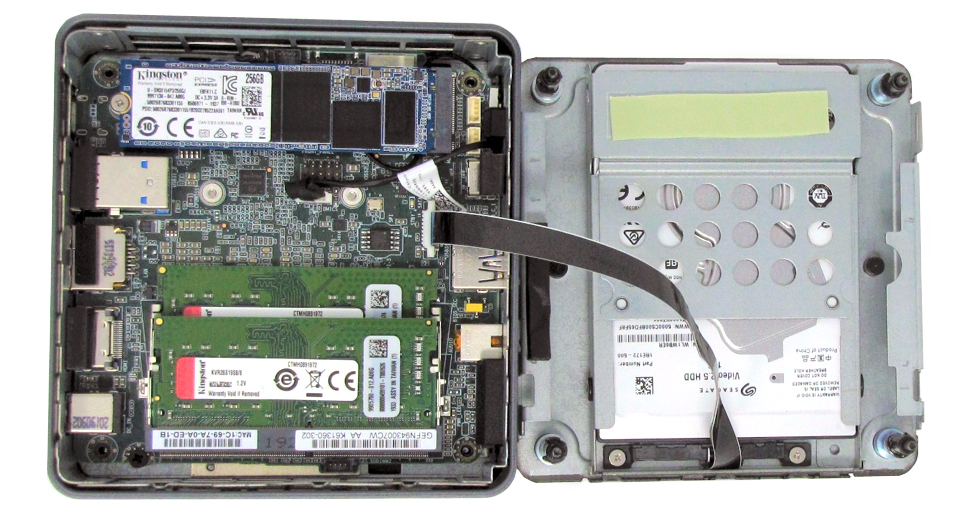 A block diagram of the device shows that both the SATA and M.2 have 6.0 Gbps connectivity. 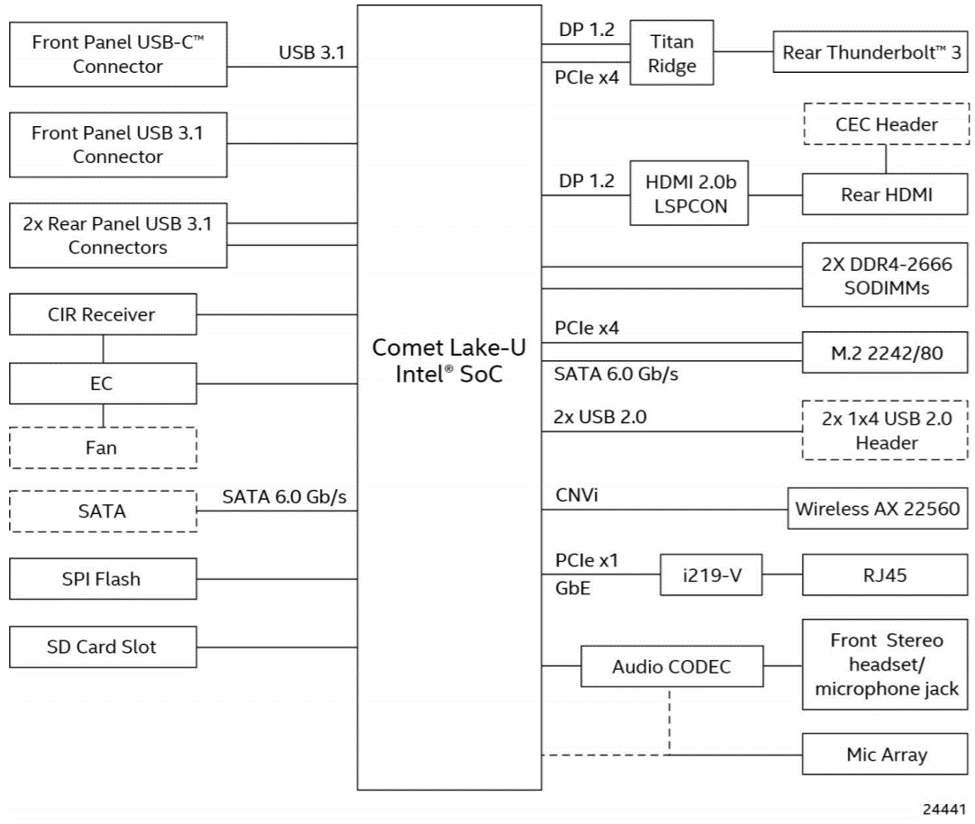 The unit has a single 10th Generation Intel Core i7-10710Ui7 processors. This CPU is a 64-bit six-core performance mobile x86 microprocessor with 12 MB Intel Smart Cache. It has support for Hyper-threading so a total of 12 threads can be running at a given time. The processor operates at normal speed of 1.1 GHz with a Turbo Boost of up to 4.7 GHz. It has a TDP (Thermal Design Power) rating of 15 W. It supports up to 64 GB of dual-channel DDR4-2666 memory.

The CPU has integrated Intel UHD Graphics 620 operating at 300 MHz with a burst frequency of 1.15 GHz. The GPU has 24 Execution Units (EU) and can support up to 3 4K displays; one through the HDMI port and two through the Thunderbolt 3 connector. The TPD and RAM are shared between the CPU and GPU.

The WLAN module in the NUC10i7FNH is the Intel Wi-Fi 6 AX201 which is capable of transfer rates of up to 2.4 Gbps.

For the initial boot and testing of the device, we connected the device to a Dell UltraSharp 32” 4K Monitor (U3219Q) via HDMI. The Dell monitor has a keyboard, mouse, and video (KVM) switch built into it. The monitors built-in KVM switch was extremely useful during our testing as it allowed us to switch between the NUC10i7FNH and our laptop with the push of a button. was used throughout our testing. We plugged a Dell wireless keyboard and mouse (part number KM636) keyboard/mouse’s dongle into the monitors upstream USB port.

We booted up the system and were presented with the Windows 10 Home (1903 build 18362.295) installation wizard. It took less than 5 minutes to install Windows and have the system running.

Rather than struggle with an unsupported OS on this system, we installed Window 10 Enterprise on the system, updated Windows and the BIOS to latest version, and installed all the suggested drivers on it.

To evaluate the performance of the device we ran SPECworkstation 3 benchmarking test on it and compared the results to a NUC8i7BEHthat we recently tested. The full reviews of the NUC8i7BEHsystem can be found here. 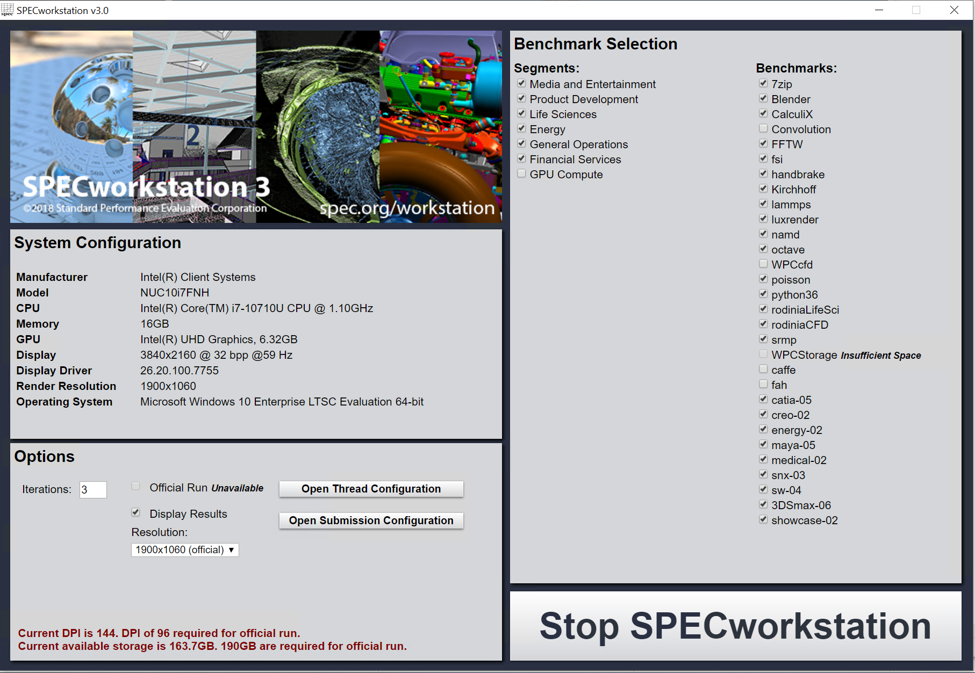 The results (Table1) show that the NUC10i7FNH system with its Intel i7-10710U hexa-core processor was more performant than the NUC8i7BEH system which had a quad-core i7-8559U CPU. We did have the SPECworkstation 3 GPU Compute category timeout due to an issue with the Caffe application on the NUC8i7BEH systems. Overall the results are inline, and what we would expect for a system with an Intel i7-10710U CPU that has 2 more cores which equates to 50% more cores and threads than the i7-8559U processor in the NUC8i7BEH.

SPECviewperf 12 benchmark, which is the worldwide standard for measuring graphics performance based on professional applications was run on the NUC10i7FNH. The SPECviewperf test runs 9 benchmarks called “viewsets,” which represent graphics content and behavior from actual applications and include categories such as 3D Max, CATIA, Creo, Energy, Maya, Medical, Showcase, Siemens NX, and Solidworks. 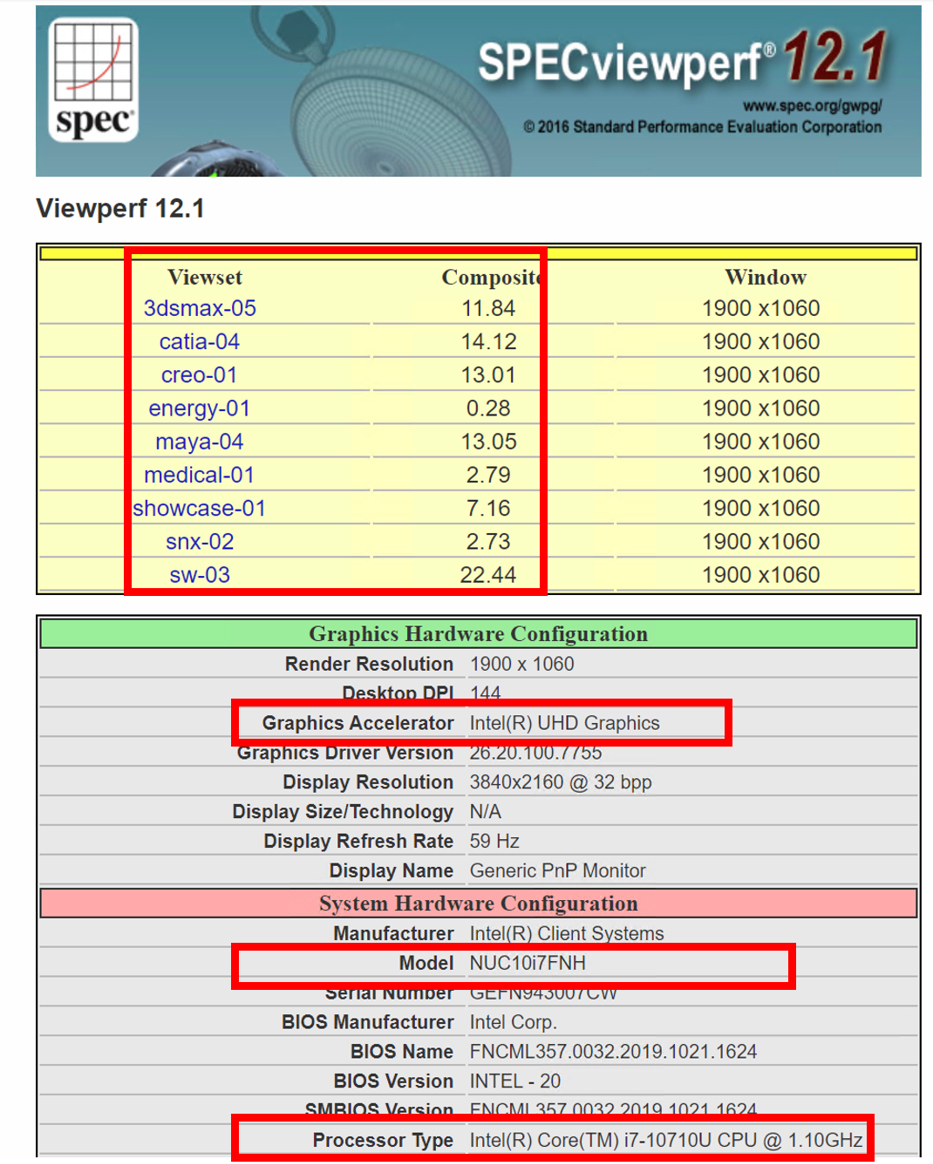 The NUC10i7FNH SPECviewperf was less performant than NUC8i7BEH which has a more powerful GPU. When viewing the SPECviewperf test on the NUC10i7FNH the output looked fine and our ad-hoc testing proved that the NUC10i7FNH is very usable in normal day-to-day usage, however for heavy graphics such as video editing or CAD work the NUC8i7BEH would be a better choice.

This was an interesting comparison as each of the systems had a different processor with a different number of cores but all of the systems had the same integrated GPU. As expected, the Intel NUC 10 NUC10i7FNH with its 6 cores had the highest total score, followed by the 4 core M90n Nano and then the 2 core M90n-1 Nano IoT. What was unexpected was that the Digital Content Creation score was slightly higher when we used the HDD on the NUC10i7FNH than when we used the SSD. 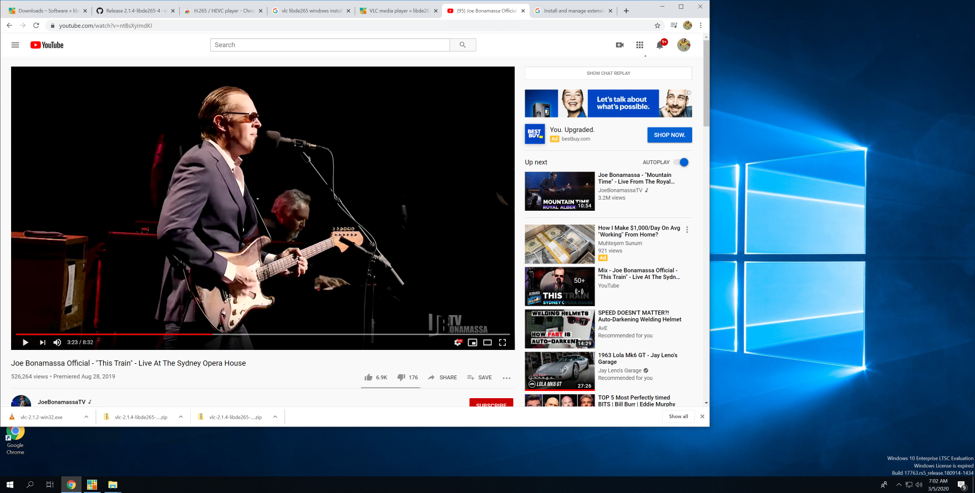 To test the performance of local video and audio we used the libde265 player to play a 640 x 360 30 fps video that was stored locally on the system in quarter scale mode and then in full screen mode. We didn’t notice any frame drops in either mode. We also played a 4K (4096 x 1720 @ 24 fps) video and found that it played with only a barely noticeable jitter. The audio played flawlessly through a headset plugged in to the device during all the tests. 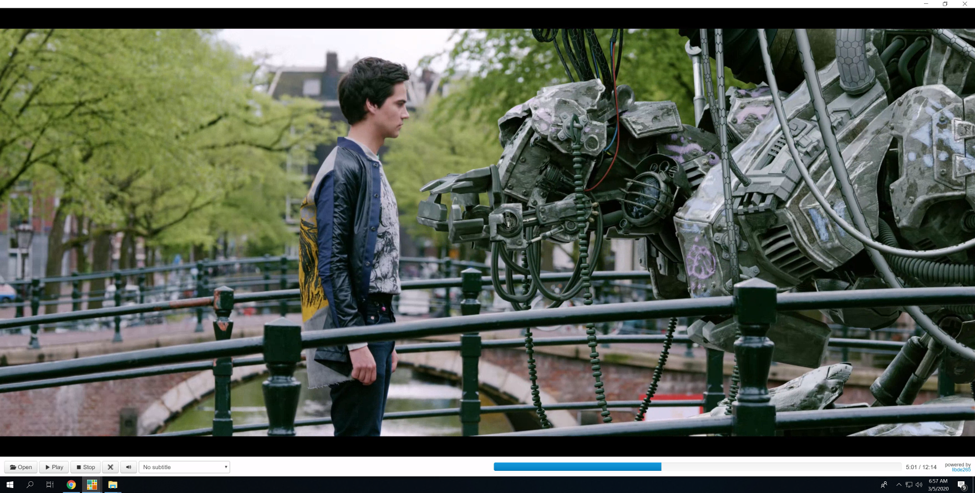 Invariable Intel’s new NUC10i7FNH will be compared to the 8th generation NUC8i7BEH. Below is comparison of the key hardware components. As this chart shows, and our testing proves out the NUC10i7FNH with its 6 cores, higher max clock speed and support of 64GB of DDR4 2666 RAM can handle simultaneous processes and heavily multi-threaded applications better than the NUC8i7BEH. It also has a more advanced WiFi chip. Its GPU is less powerful that the one in the NUC8i7BEH however if you are not doing GPU intensive applications, such as gaming, CAD, or video editing the GPU in the NUC10i7FHN should be fine.

One oddity that we found on the NUC10i7FNH is that it’s LED on indicator is a lot dimmer than that one on the NUC8i7BEH. It was a minor thing but in bright light it did make it difficult to tell if it was on.

We continue to be impressed by the NUC build quality and by how much power Intel can put into these small form factor systems. The Intel NUC 10 NUC10i7FNH can be purchased as a kit and the purchaser can equip it as they see fit or it can be purchased fully configured with RAM and storage. For those that are willing to sacrifice the 2.5” drive slot they can get the slightly shorter NUC10i7FNK system. The NUC10 family can also be purchased with a i3 or i5 processor.

It does have very good connectivity with its 3 external USB 3.1 ports and single USB Type-C Thunderbolt connector. It supports a single SATA drive, and a single M.2 drive. This is the first NUC system that supports 64GB of RAM.

Although not extensively tested we did find that the built-in Wi-Fi worked well, and the WLAN module is capable of up 2.4 Gbps. The system has a three-year international limited warranty.

Based on the performance of the benchmarks and the ad-hock testing that we performed on the system we feel that it would make a very good power-user system for demanding office users that use typical office applications, does demanding web browsing, and plays streaming videos. With its 6 cores and support for 64 GB of RAM it will be able to crunch through complex calculations from multi-threaded programs.

The more adventurous have found that they can install a hypervisor such as ESXi on it, in fact NUC systems have found quite a following in home labs.