We recently had the opportunity to review an Intel NUC7CJYS; a low priced NUC. We were impressed with the value that it delivered and thought it would be interesting to see how much power Intel packs into a mid-tier NUC systems, in this case the NUC8i7BEH (Bean Canyon). Intel NUC systems are used by enthusiast that want to build a home lab that take up a minimal amount of space, custom builders that configure them for a specific purpose such as entertainment systems, home users that are looking for a quiet, small computer, and others that want a system that take up a minimal amount of space.

We recently had the opportunity to review an Intel NUC7CJYS; a low priced NUC. We were impressed with the value that it delivered and thought it would be interesting to see how much power Intel packs into a mid-tier NUC systems, in this case the NUC8i7BEH (Bean Canyon). Intel NUC systems are used by enthusiast that want to build a home lab that take up a minimal amount of space, custom builders that configure them for a specific purpose such as entertainment systems, home users that are looking for a quiet, small computer, and others that want a system that take up a minimal amount of space.

We found that the NUC that we previously reviewed, the 7CJYS, made a great value system for light duty users that use typical office applications, do light web browsing, and play streaming videos. We also found that the 7CJYS made a good hardware platform for a VDI client. Our review of the 7CJYS can be found here and our writeup of using the 7CJYS as a VDI client. The system that we have for this review, the 8i7BEH, is geared towards moderate power users. The 8i7BEH can be used to do GPU and CPU intensive tasks such as gaming, video and audio editing, or even run a home lab. We are planning on using this 8i7BEH as a standalone Kubernetes server.

The Intel NUC8i7BEH which is a mid-priced, small form factor kit system. It is considered a kit as it does not come with any storage, RAM or an operating system. The 8i7BEH, as all of the NUC computer, is very small (4.5” x 4.5” x 2”) but Intel is able to pack a lot of power in to it as the 8i7BEH is powered by a quad-core Intel Core i7-8559U processor and an integrated Iris Plus Graphics 655 GPU. Connectivity into it very good as it has 6 USB ports, WiFi, and an RJ45 port.

The NUC comes packaged in a heavy box, with the device itself being wrapped in an electrostatic plastic bag. The box also contains a 19V, 4.7A AC-DC power brick adapter and a VESA mounting plate.

On the rear of the device is an HDMI port, two 2.0 USB ports, a USB Type-C port, and the power connection. 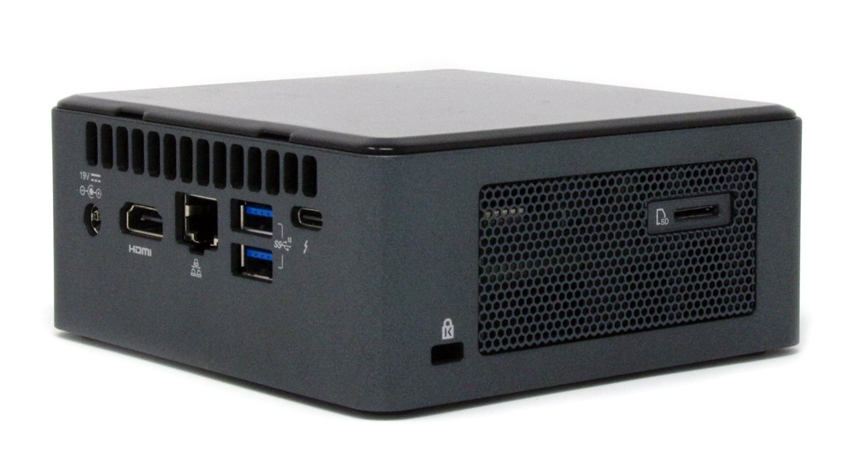 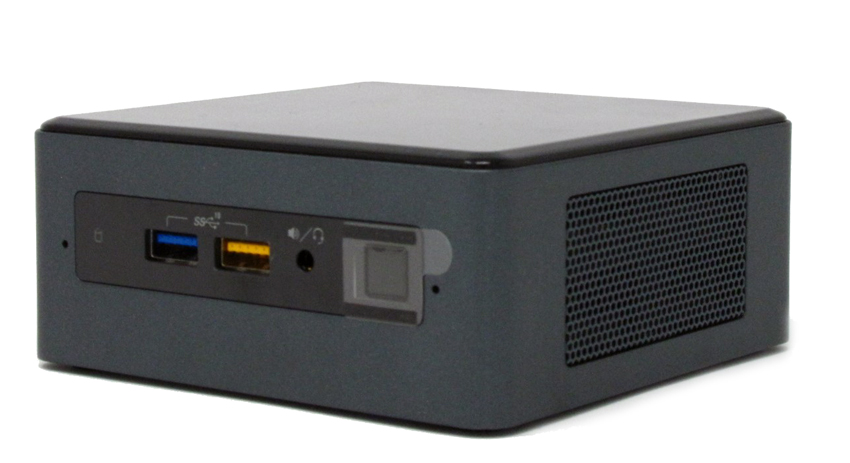 The sides and top of the device’s case are made of strong plastic with inlet metal panels with ventilation holes on the two sides, while the back has 14 slots molded into the back for airflow. The bottom of the device is made of metal and has two threaded holes where the included VESA mount can be attached. The top of the device is easily removable. Overall, the case on this device is very durable and should hold up well in a home, office or data center. 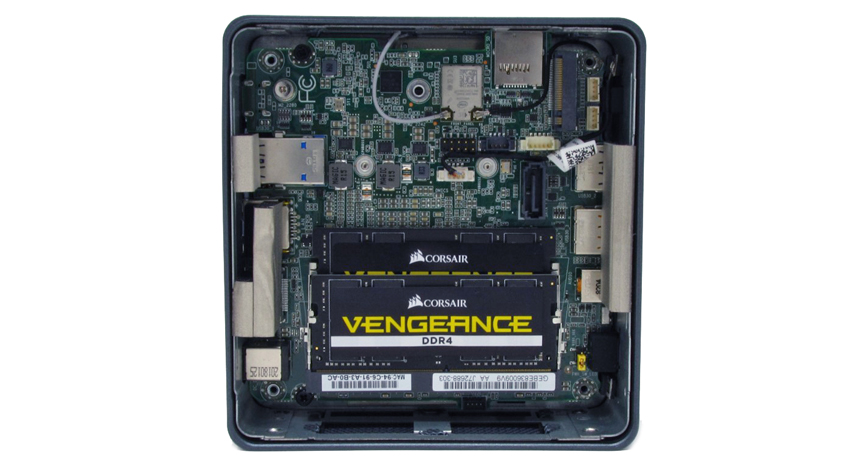 The Intel i7-8559U CPU, which powers the 8i7BEH is a 64-bit quad-core high-end performance x86 mobile microprocessor. It has support for Hyper-threading so a total of 8 threads can be running. The processor operates at 2.7 GHz with a TDP (Thermal Design Power) of 28W with a Turbo Boost of up to 4.5GHz. It supports up to 32GB of dual-channel DDR4-2400 memory. The CPU has an integrated Intel Iris Plus Graphics 655 GPU operating at 300MHz with a burst frequency of 1.2GHz. The GPU has 128MB of eDRAM L4 cache. The GPU has 47 Execution Units (EU) 47 and can support up to 3 displays (one through the HDMI port (4K @ 24Hz) and two through the Thunderbolt 3 connector (4K @ 60Hz)). The TPD and RAM are shared between the CPU and GPU.

As this was a bare computer kit after checking theIntel Product Compatibility Toolwe populated the system with two 16GB SO-DIMM’s for a total of 32GB of RAM (Corsair 32GB Kit 16GBx2 DDR4 2400 MT/S), installed an 480GB SSD (Samsung SSD MZ7GE480HMHP) and installed Windows 10 Enterprise on the system. Before we installed the SSD on the device we placed the drive in a Linux system and then used FIO to precondition the entire drive to ensure that the SSD results were not skewed by “first-writes” to the disk.

For the initial boot and testing of the device, we connected the device to a Dell UltraSharp 32” 4K Monitor (U3219Q) via HDMI. The Dell monitor has a keyboard, mouse, and video (KVM) switch built into it. The monitors built-in KVM switch was extremely useful during our testing as it allowed us to switch between the 8i7BEH and our laptop with the push of a button. was used throughout our testing. We plugged a Dell wireless keyboard and mouse (part number KM636) keyboard/mouse’s dongle into the monitors upstream USB port.

To evaluate the performance of the device we ran SPECworkstation3 benchmarking test on it with the CPU Turbo mode enabled and disabled in the bios and compared the results to a NUC7CJYS that we recently tested. 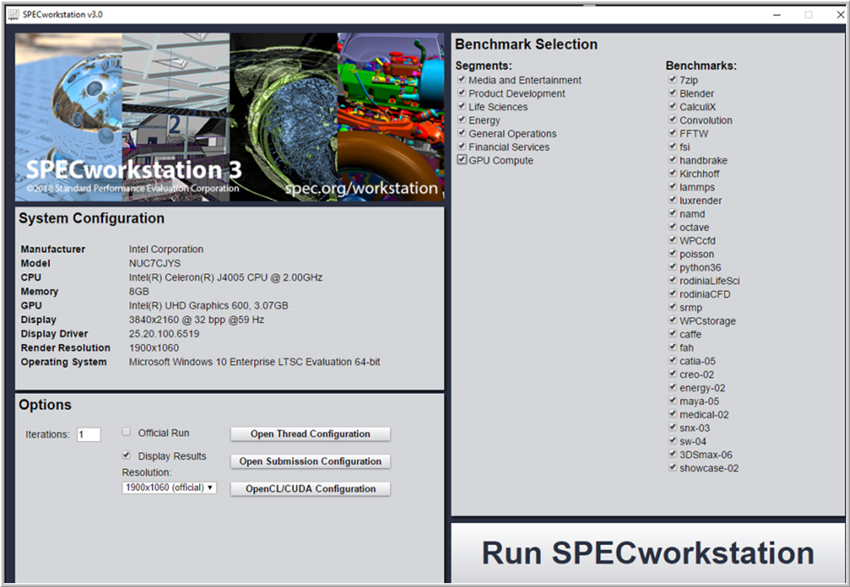 The results show that the 8i7BEH system was more performant than the NUC7CJYS system which had a dual-core Intel Celeron J4005 CPU. We did have the SPECworkstation 3 GPU Compute category timeout do to an issue with the Caffe application. Overall the results are inline, and what we would expect for a system with an Intel i7-8559U CPU.

SPECviewperf 12 benchmark, which is the worldwide standard for measuring graphics performance based on professional applications was run on the 8i7BEH. SPECviewperf runs 9 benchmarks called “viewsets,” which represent graphics content and behavior from actual applications and include categories such as 3D Max, CATIA, Creo, Energy, Maya, Medical, Showcase, Siemens NX, and Solidworks. 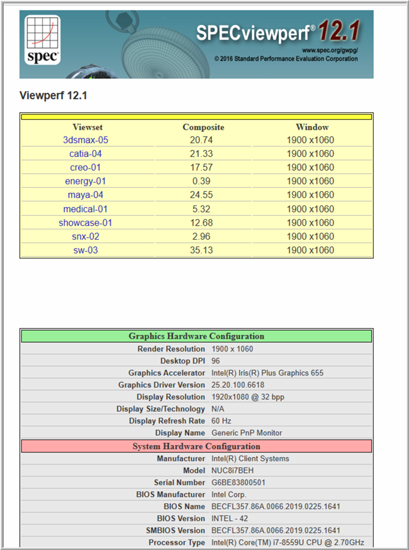 The NUC8i7BEH SPECviewperf was far more performant than NUC7CJSAL which has a less power CPU and GPU. When viewing the SPECviewperf test on the 8i7BEH the output looked fine and our ad-hoc testing provide that the 8i7BEH is very usable in normal day-to-day usage. 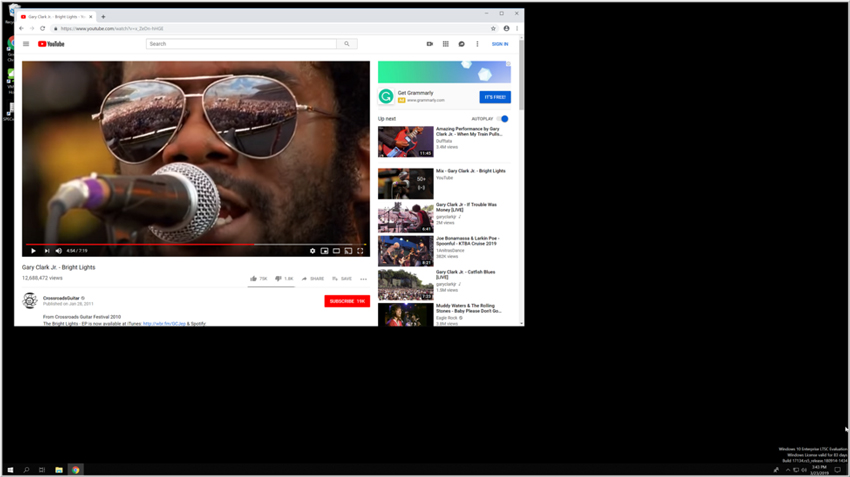 To test the performance of local video and audio we used VLC to play a 640 x 360 30 fps video that was stored locally on the system in quarter scale mode and then in full screen mode. We didn’t notice any frame drops in either mode. We also played a 4K (4096 x 1720 @ 24 fps) video and found that it played without any issues. The audio played flawlessly through a headset plugged in to the device during all the tests. 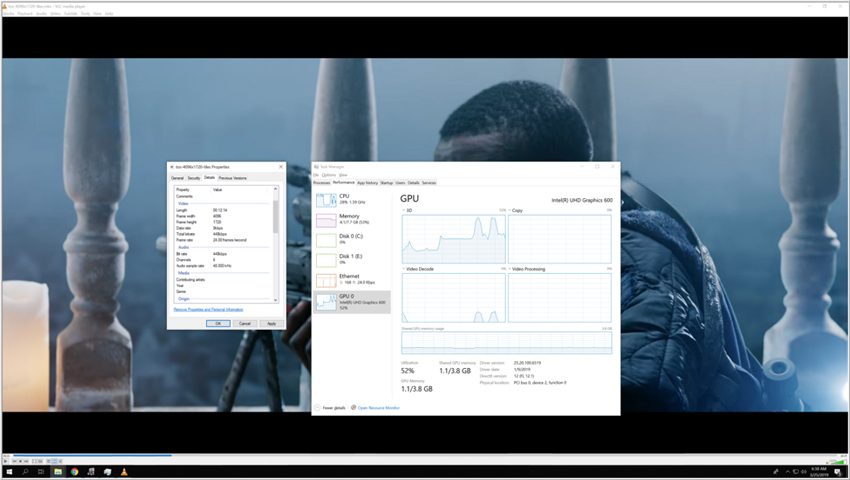 It does have very good connectivity with its 4 external USB 3.1 ports and single USB Type-C Thunderbolt connector. It is limited as it only supports a single SATA drive, but a m.2 drive can also be used with this system. It does advertise support for 32GB of RAM, but others have found that it works with 64GB of RAM.

We placed 32GB of RAM and added an enterprise grade 480GB SSD drive into our system in order to get a better idea of how performant the system would be when it is well-equipped. Although not extensively tested we did find that the built-in Wi-Fi worked well, and the WLAN module is capable of up 1.73 Gbps. The system has a three-year international limited warranty.

Based on the performance of the benchmarks and the ad-hoc testing that we performed on the system we feel that it would make a very good mid-range system for a demanding office user that uses typical office applications, does demanding web browsing, and plays streaming videos. The CPU and GPU in the system would work well as mid-range gaming or video and audio system. It should be noted that systems Type-C port gives this system the ability to work with eGFX enclosures.