Intel was one of the last manufacturers to adopt SandForce controllers for their enthusiast grade SSD 520, but apparently they seem to be doing well enough with it to commit to a second line of SandForce-based SSDs with the Intel SSD 330 family. The SSD 330 uses the same controller as the 520 does, the core differentiation being the change in NAND layout from the SSD 520 to SSD 330 and different firmware. The Intel SSD 330 makes use of fewer memory channels, resulting in slower write speeds in certain scenarios. Such diversification is common in the client SSD space as manufacturers look for ways to provide different levels of performance and pricing for broader market appeal.

Intel was one of the last manufacturers to adopt SandForce controllers for their enthusiast grade SSD 520, but apparently they seem to be doing well enough with it to commit to a second line of SandForce-based SSDs with the Intel SSD 330 family. The SSD 330 uses the same controller as the 520 does, the core differentiation being the change in NAND layout from the SSD 520 to SSD 330 and different firmware. The Intel SSD 330 makes use of fewer memory channels, resulting in slower write speeds in certain scenarios. Such diversification is common in the client SSD space as manufacturers look for ways to provide different levels of performance and pricing for broader market appeal.

While Intel was a bit coy in the SSD 330 announcement, most assumed they had switched to asynchronous NAND. They haven’t; Intel is still using their own 25nm synchronous MLC NAND for the SSD 330 family, which is the same part number that we saw in the SSD 520. Of course Intel loves to promote their NAND quality, which is hand-picked and engineered for mainstream SSD duty by Intel’s own fab. Consumers benefit from this integration, as Intel SSDs have historically provided levels of reliability and longevity matched by few other brands. Controlling your own NAND and supporting the drives with in-house engineering goes a long way to make the Intel drives perform reliably in the field.

Intel offers the SSD 330 in just three capacities geared toward the mainstream consumer: 60GB, 120GB and 180GB, and ships with a desktop 2.5-inch to 3.5-inch bracket and required cabling. The drives carry street pricing of $99.99, $150 and $265 respectively. The Intel SSD 330 includes a three year warranty, compared to a five year warranty for the SSD 520.

The Intel SSD 330 shifted away from the normal 9.5-mm two-piece construction of the SSD 320 and SSD 520, instead opting for a top case-half that takes up the full size without the use of an external spacer. The 9.5mm design is a bit curious, given Intel has long offered SSDs in a 7mm drive height, and that’s clearly the direction the market is going, as many new SSDs come with a 7mm drive height standard. By bulking up the SSD 330, it’s almost as if Intel is purposely avoiding the ultrathin compute market with this particular drive. 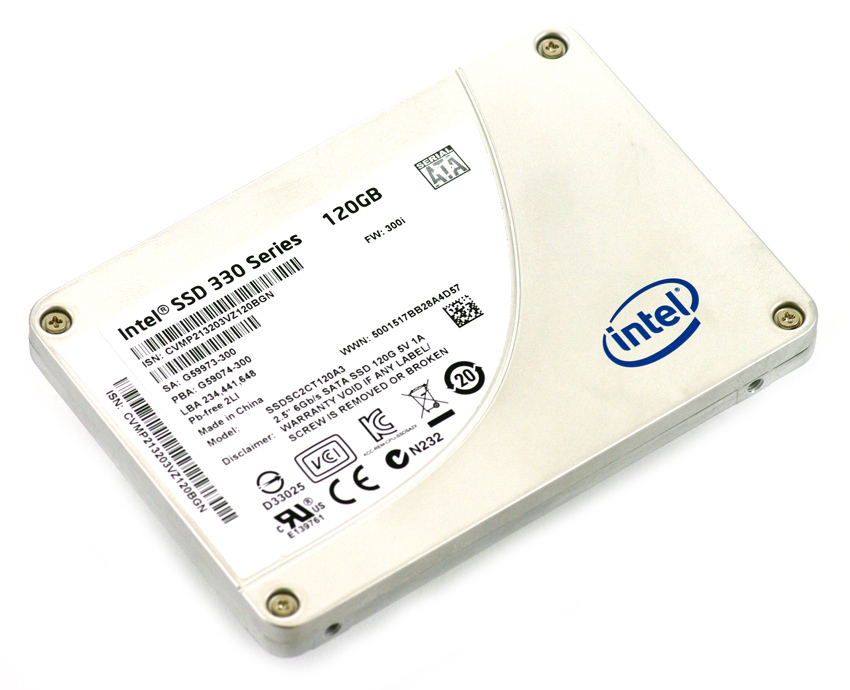 The bottom is bare metal without any stickers present. The top sticker is all that Intel has used over the years, listing the various important pieces of information such as model number, capacity, serial number, firmware version, and the like.

The front of the SSD 330 has the same SATA power and data connection without any service-mode pins located near it. All firmware updating takes place through the Intel SSD Toolbox, without any hardware intervention.

Taking the 120GB Intel SSD 330 apart is very easy with a simple Phillips head screwdriver. After removing the four screws located at the corners the top cover easily lift up. Once that is removed you are greeted with the underside of the circuit board, which in this case only includes NAND pieces. New compared to the SSD 320 or SSD 710 layout is a thermal pad on the bottom half of the case to draw heat away from the SandForce controller.

At the heart of the Intel SSD 330 is the LSI SandForce SF-2281 controller. The flash is comprised of eight 25nm Intel 29F16B08CCME2 16GB pieces, which according to Intel are the “cream of the crop” when it comes to selection from the Intel NAND Factory. When you make the NAND yourself, you can dictate who gets what, and in this case Intel picks the highest grade pieces for themselves. What this means for the consumer is no matter what, if you buy Intel SSDs you get the best Intel components. 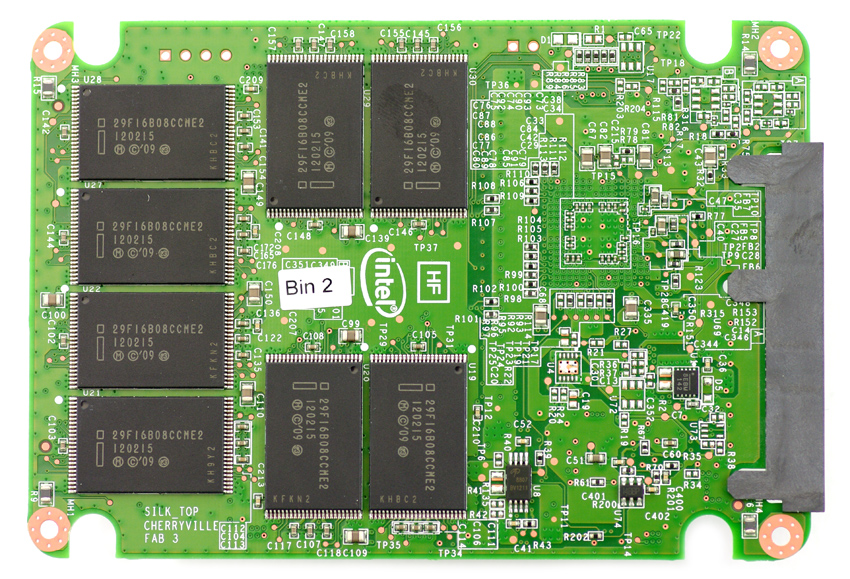 The bottom of the Intel SSD 330 is bare, except for the LSI SandForce SF-2281 controller. 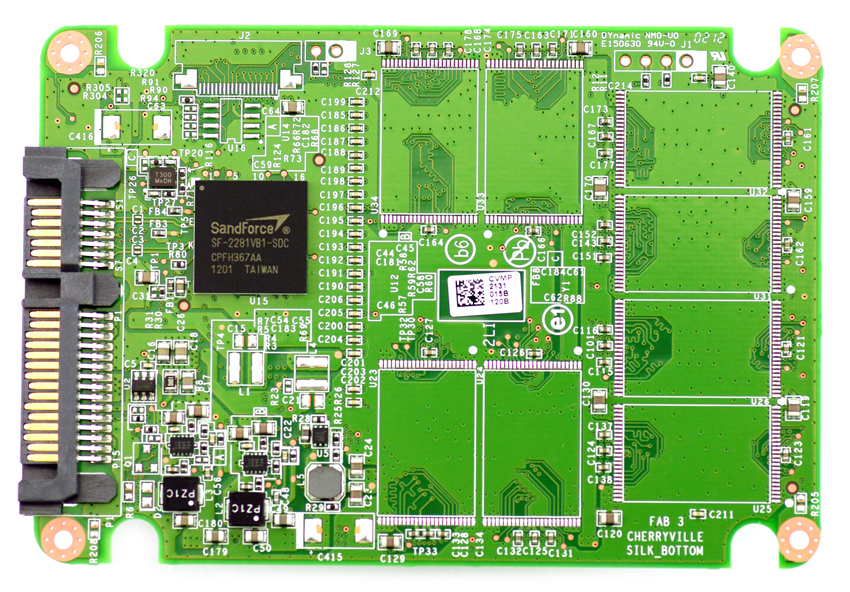 With a small 4K random transfer, the Intel SSD 330 and Intel SSD 520 offered near identical performance attributes, although the read speed with incompressible data dropped slightly more on the SSD 330 compared to the SSD 520. 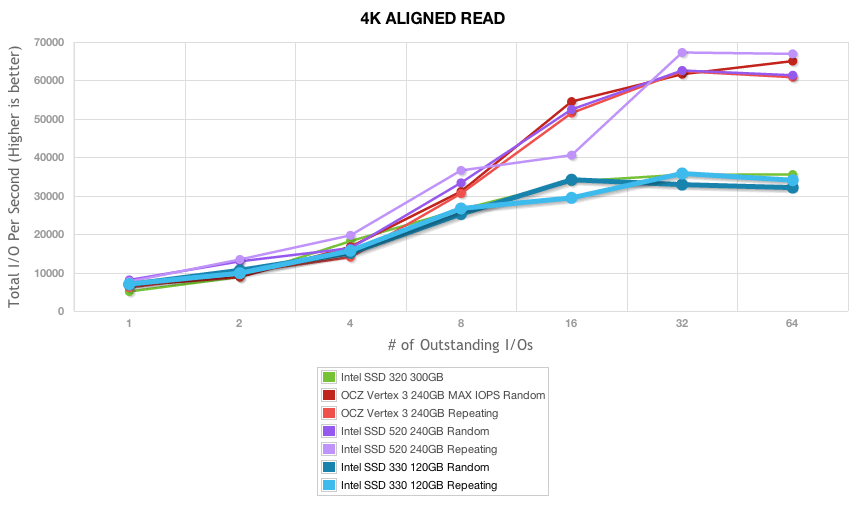 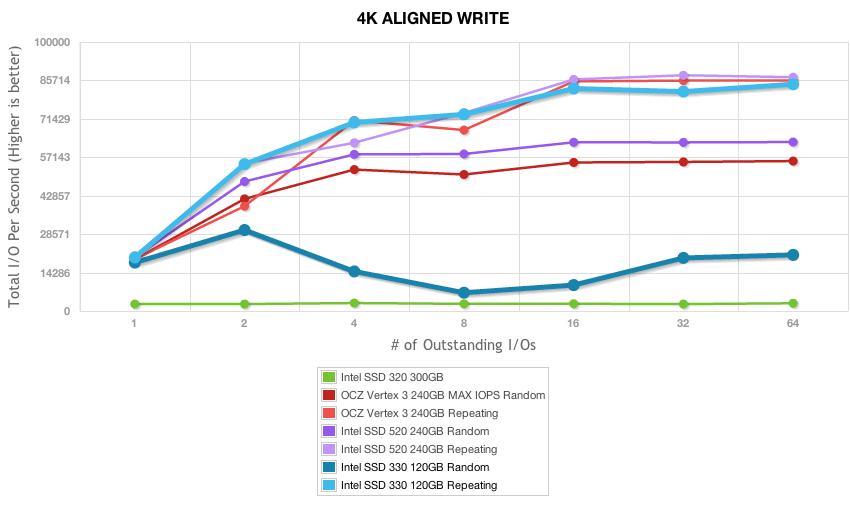 Looking at peak random 4K write speeds, Intel quotes 33,000 IOPS, while we measured a peak of 84,298 IOPS with repeating data or 30,098 IOPS with incompressible data.

In our 4K write latency test, which measures access times at a queue depth of 1, the 120GB Intel SSD 330 scored very well with average response times of 0.0492ms with compressible data and 0.0505ms with in compressible data. Peak latency times were also excellent, measuring 37.33ms and 39.42ms for repeating and randomized respectively. 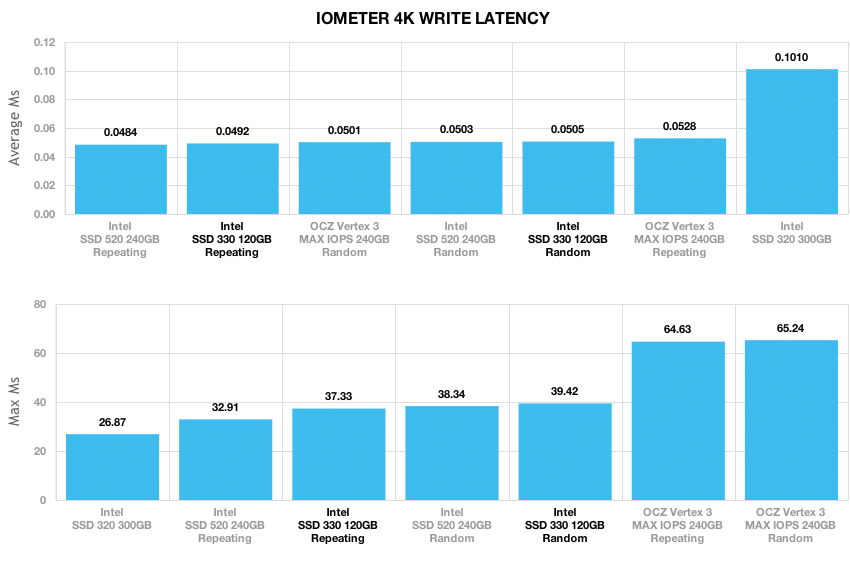 Our last group of consumer IOMeter synthetic benchmarks looks at mixed-load server profiles including Database, Workstation, File Server, and Webserver. Looking at the performance of the Intel SSD 330 with repeating data, it ran middle of the pack at higher queue depths. When we changed to incompressible data though, speeds dropped towards the bottom, but above the older Intel SSD 320. 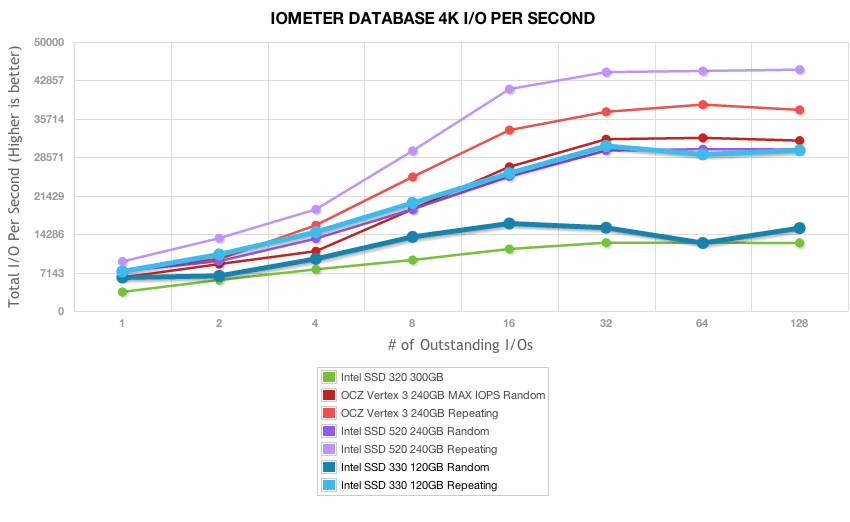 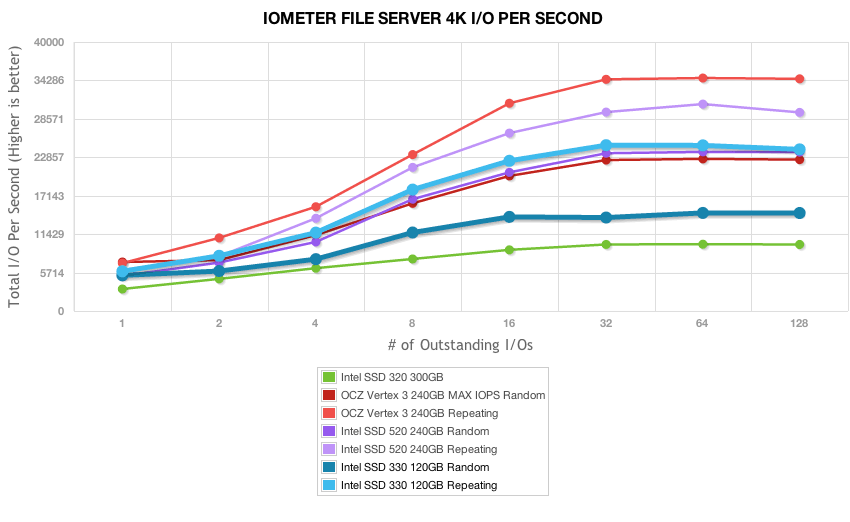 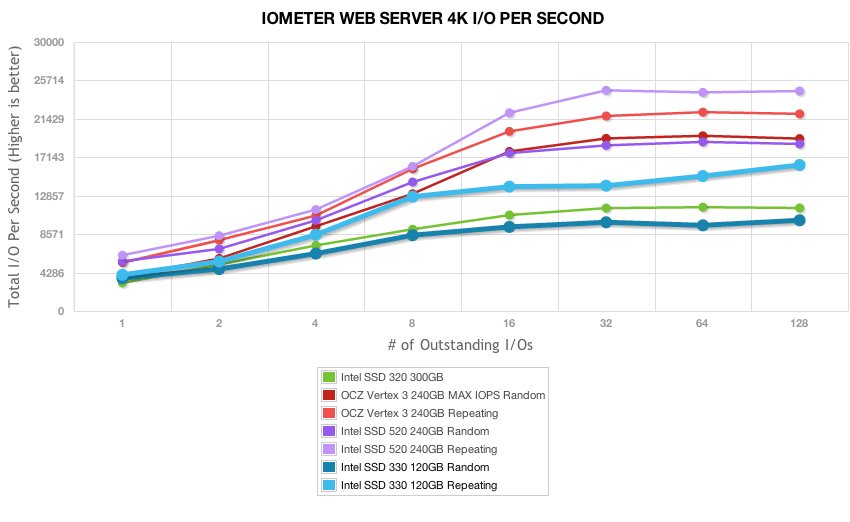 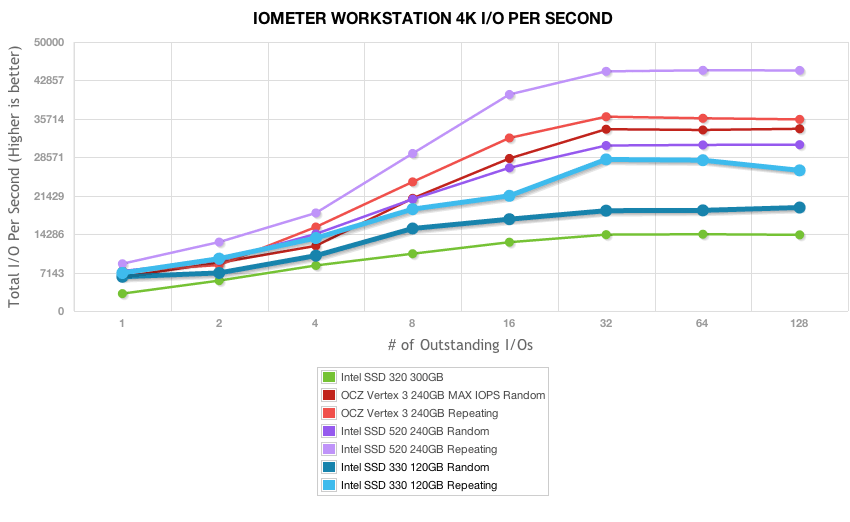 For the average user, trying to translate random 4K write speeds into an everyday situation is pretty difficult. It helps when comparing drives in every setting possible, but it doesn’t exactly work out into faster everyday usage or better game loading times. For this reason we turned to our StorageMark 2010 traces, which include HTPC, Productivity, and Gaming traces to help readers find out how a drive might rank under their conditions. 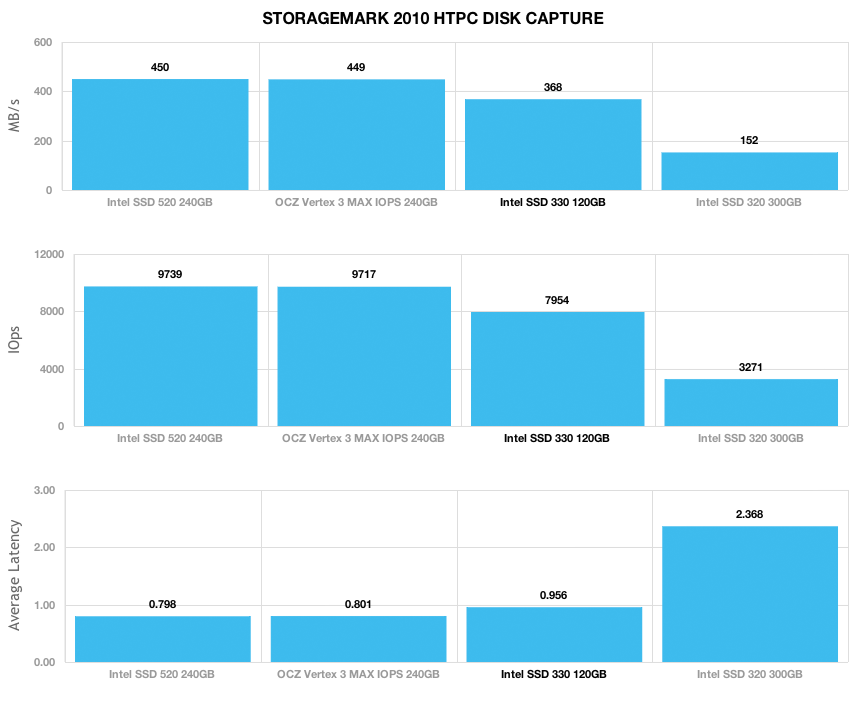 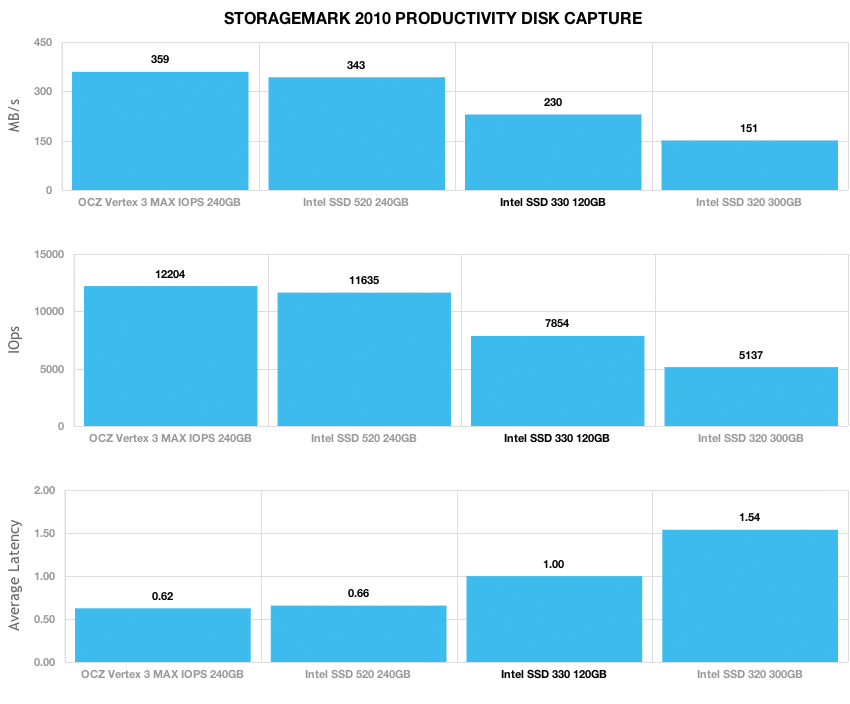 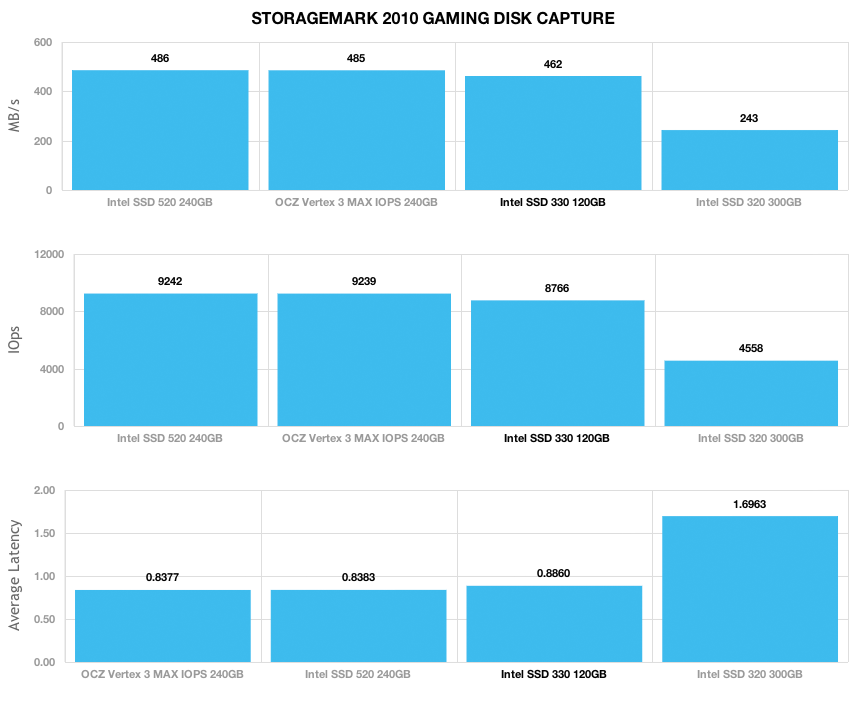 With one of the main draws towards SSDs being their lower power consumption for the side effect of extended battery life in notebooks, we pay close attention to how much power these drives consume during our tests. Applying the same read and write profiles that we performed at the beginning of this review, we measure the power used by the SSD during these read or write profiles. SandForce SSDs heavily rely on compression for faster speeds and less write amplification, as a result we measure power with both compressible and incompressible data.

Power consumption was on par with the Intel SSD 520, although we were surprised to see slightly higher power values for sequential writes with compressible data. With repeating data, power varied between 2.09 watts with sequential write to 1.70 watts with random read. Idle measured 0.83 watts.

Intel is presumably selling many SSD 520’s to enthusiasts and the like who want one of the fastest and most reliable SSDs around for use in client systems. It makes sense then that Intel would extend their brand further in the mainstream space, offering the SSD 330 for those who want Intel reliability but are willing to give up a little performance for a lower price tag.

When compared to the SSD 320 which the 330 will eventually supplant, it’s night and day. The SSD 330 wins out across the board, making it pretty clear that the switch to SandForce for these recent SandForce-based SSDs was a good decision, Intel’s client silicon just couldn’t keep pace. When positioned against the SSD 520, the SSD 330 holds its own much of the time, coming in a half step behind on our gaming trace. In many areas the 520 just can’t be contended with, which is exactly how Intel drew this up.

When looking at all the results in their entirety though, the SSD 330 does exactly what Intel wanted. It gives them a simple three capacity SSD option to market to the masses who want the benefits of a reliable SSD without the bigger investment the SSD 520 requires. Given the SSD 330 just started shipping this week, the street pricing won’t take long to start tagging the $1/GB mark, with a truly high-quality drive. As the pricing falls, the SSD 330 gets more attractive…that is unless you want to use it in an ultrathin notebook.

The Intel SSD 330 delivers on Intel’s plan to expand their mainstream SSD offering with a much more competitive drive than what they had to offer with the SSD 320. Even with current street pricing the SSD 330 is appealing, and the value proposition will only get better with time. For those looking for an SSD that’s reliable and won’t break the bank, the SSD 330 is a great option.