While SSDs get all the attention when it comes to high-performance storage, the venerable platter-based alternatives aren’t dead yet. Western Digital is out to prove that hard drives can still create substantial performance under the right conditions, with capacity points that would make most SSD users envious. The new WD VelociRaptor is a 10,000 RPM hard drive with enlarged 1TB total capacity, up from 600GB in the prior model. The goal is to provide enterprise-grade drive reliability for workstation users and creative professionals who want a high-performance, high-capacity drive, without the expense of SSDs.

While SSDs get all the attention when it comes to high-performance storage, the venerable platter-based alternatives aren’t dead yet. Western Digital is out to prove that hard drives can still create substantial performance under the right conditions, with capacity points that would make most SSD users envious. The new WD VelociRaptor is a 10,000 RPM hard drive with enlarged 1TB total capacity, up from 600GB in the prior model. The goal is to provide enterprise-grade drive reliability for workstation users and creative professionals who want a high-performance, high-capacity drive, without the expense of SSDs.

The VelociRaptor line has long been the fastest SATA hard drive available which when paired with typical hard drive characteristics, makes them very interesting for uses with heavy-write endurance workloads. While SSDs excel in read performance, when it comes to write access over long periods of time, they bog down and wear out, giving the high-performance hard drive an edge in these types of workloads. Given the 1TB top-end capacity, it’s easy to see why those in content creation or those who otherwise work with heavy read/write loads would find the VelociRaptor family appealing.

The design of the new 1TB VelociRaptor is essentially the same as the prior-generation 600GB drive. They both feature a 2.5″ drive body that gets mounted within a 3.5″ bay called the IcePack, which acts as a heatsink to shed off thermal output. Inside WD uses three 333GB platters for the 1TB capacity, short stroking the smaller capacity drives accordingly. The new WD VelociRaptor comes in 250GB, 500GB and 1TB capacities with suggested pricing of $160, $210 and $320 respectively. The VR family includes a warranty of five years. 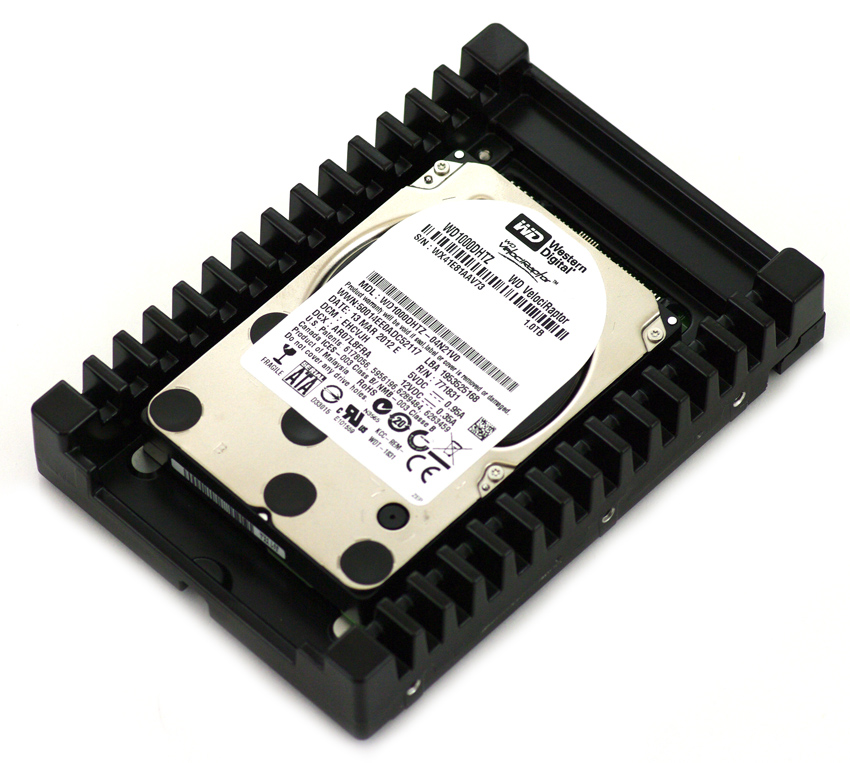 The Western Digital VelociRaptor has a very unique appearance compared to any other 3.5” drive on the market. The VelociRaptor is made up of a 2.5” enterprise-grade hard drive mounted to an “IcePack” heatsink frame with a pin-to-pin adapter to position the SATA and power connections in the universal location for backplane connections. The heatsink gives the drive a rugged and high-tech appearance.

Build quality is very good with oversized components used throughout the construction of the drive. Starting at the exterior and moving inward, the heatsink assembly is thick machined metal.

The drive is secured to the heatsink or IcePack with four large Torx screws. With the drive removed you can see a thermal transfer pad that is used to shed heat away from the drive and into the IcePack assembly.

The circuit board at the front of the IcePack is a connection adapter only with no controller chips or anything to modify the connection to a computer.

The 2.5” drive inside the VelociRaptor is not unlike many of the 2.5 SAS drives currently on the market. It has the same build as competing drives with the only primary difference being the direct SATA connection instead of using a SAS connector. The drive has a beefier feel than 2.5” notebook drives but is still vastly lighter than 3.5” desktop models.

The 2.5” VelociRaptor has its circuit board designed in such a way to keep all the heat-generating components tightly pressed to the bottom of the drive body. This allows the body to act as a heatsink instead of making the chips shed heat into the open air. Another advantage is this keeps the surface-mount electronics safer in the event of being knocked around.  Taking the drive apart we see a standard circuit board with a padded shim inbetween the board and the drive. The shim helps with vibration and impacts. Also note the shim has cutouts for each heat-generating component. 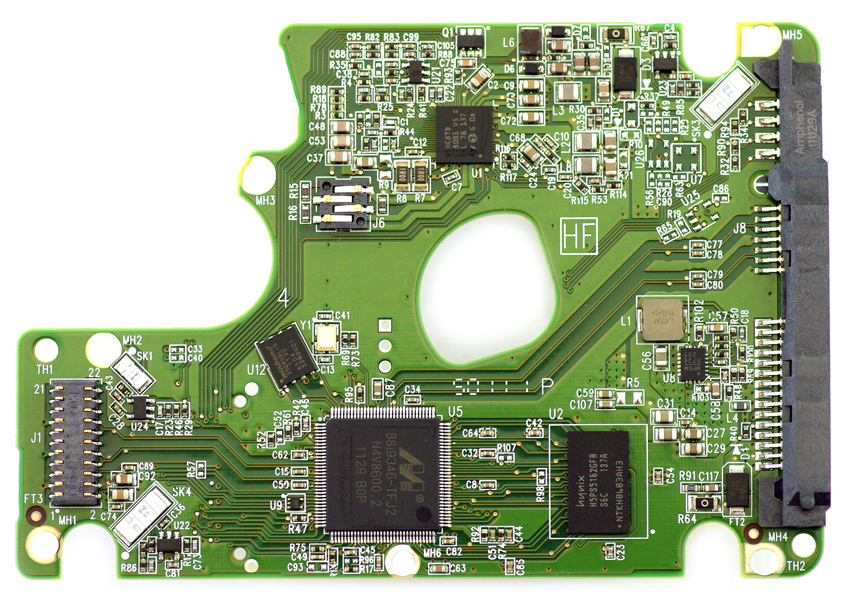 Our first synthetic benchmark tests the straight line performance of the 1TB VelociRaptor using a sequential large block transfer in IOMeter. Western Digital lists transfer speeds in excess of 200MB/s in this scenario.

With a 2MB sequential transfer in IOMeter, we measured an average read and write speed of 206MB/s from the 1TB VelociRaptor compared to 146-147MB/s from the 600GB previous-generation VelociRaptor.

Our next test switches from sequential to random transfers, but still maintains a large block-size of 2MB.

With a random large-block transfer we measured read speeds of 102MB/s and write speeds measuring 126MB/s, compared to 84MB/s read or 75MB/s write from the previous-generation model.

Moving down to even smaller block sizes, our next test measured 4K random read and write performance… one of the hardest tests for hard drives since the head must physically move to random locations on the platter.

Random 4K read speeds from the new 1TB VelociRaptor stayed the same as the previous 600GB mode, but write speeds picked up from 300 IOPS to 371 IOPS.

Expanding on our 4K random write test, we look at how long each transaction took to complete. When comparing hard drive write latency, faster rotational speed and increased platter density are the differing factors on models with lower or better scores. The 10,000RPM 1TB VelociRaptor dropped its average 4K latency to 2.69ms, compared to 3.33ms from the 600GB model. This is roughly half of a 7200RPM hard drive. Both VelociRaptors also offered very low peak latency times of 11.45ms and 11.85ms. 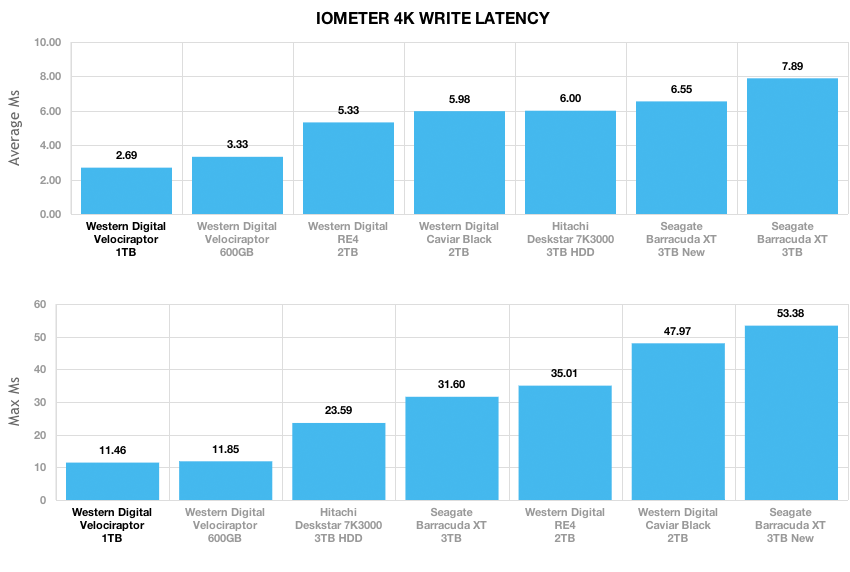 Using CrystalDiskMark, we measured the performance of the fastest (outer track) and slowest (inner track) sections of the new 1TB Western Digital VelociRaptor and compared it to the previous generation model. Significant gains were noticed across the board, with large and small-block random access improving dramatically. 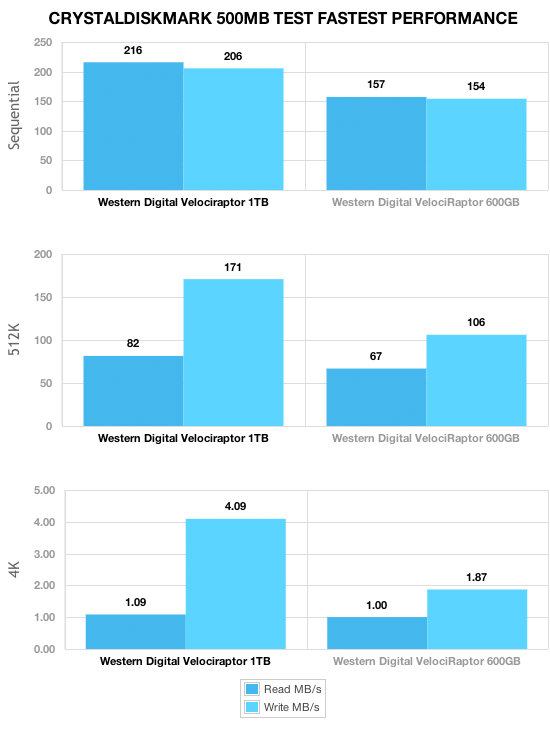 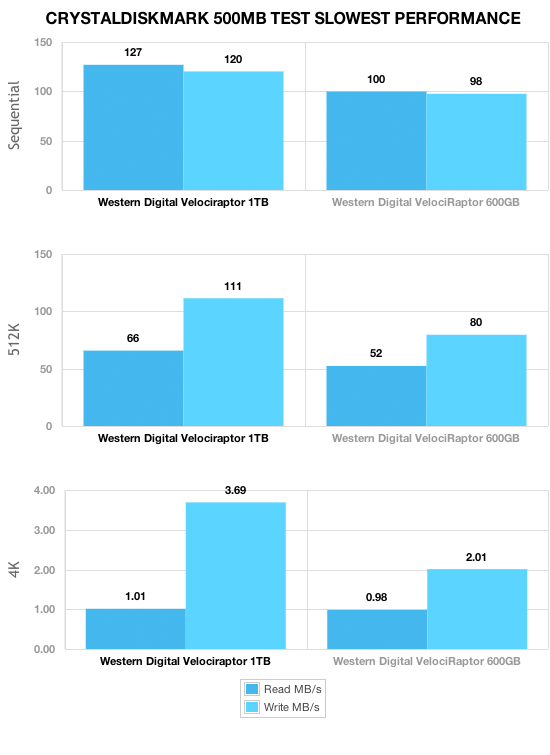 Our last group of consumer IOMeter synthetic benchmarks looks at mixed-load server profiles including Database, Workstation, File Server, and Webserver. In all tests the new 1TB VelociRaptor posted modest gains over the previous-generation model, and offered a strong performance boost over a 7200RPM hard drive. 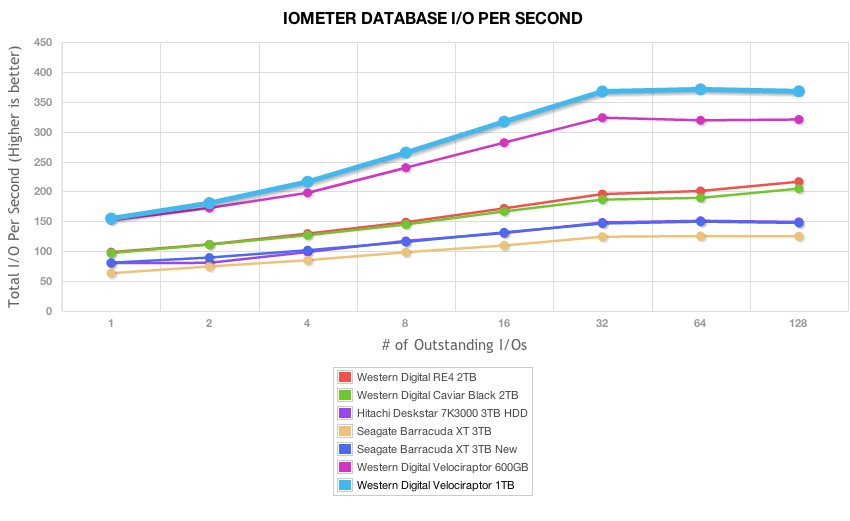 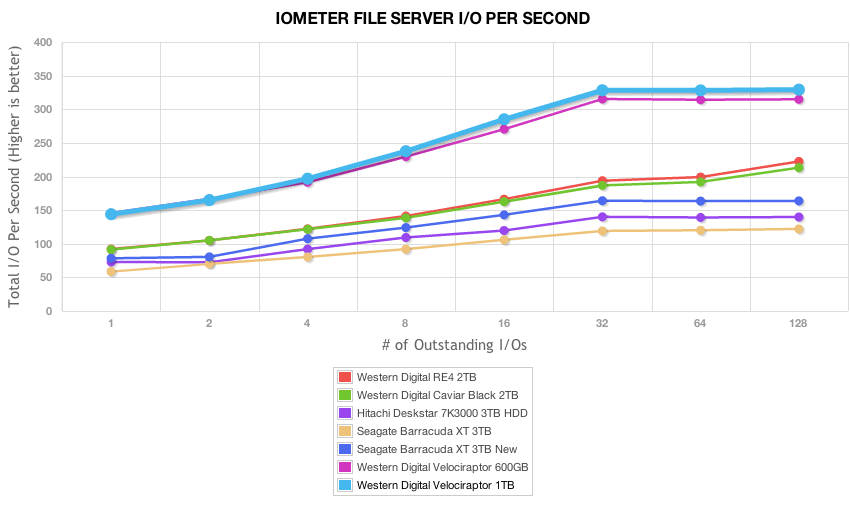 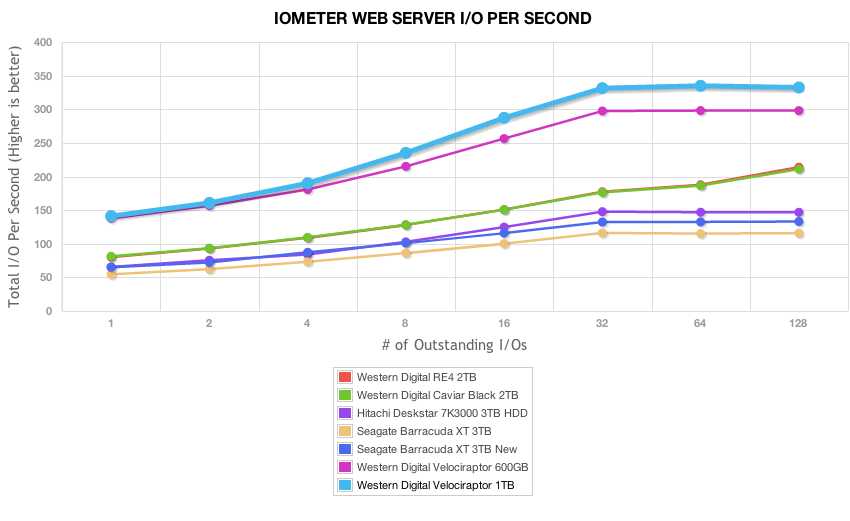 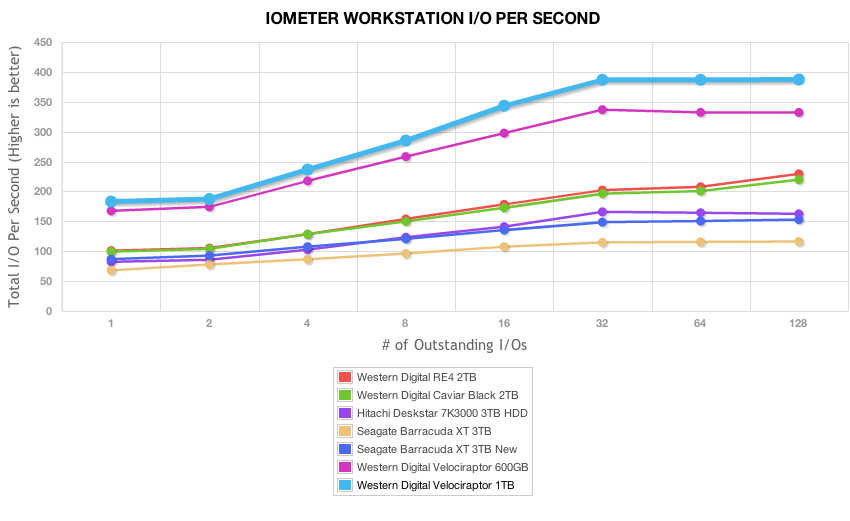 For the average consumer, trying to translate random 4K write speeds into an everyday situation is pretty difficult. It helps when comparing drives in every setting possible, but it doesn’t exactly work out into faster everyday usage or better game loading times. For this reason we turned to our StorageMark 2010 traces, which include HTPC and Gaming traces to help readers find out how a drive might rank under their conditions. 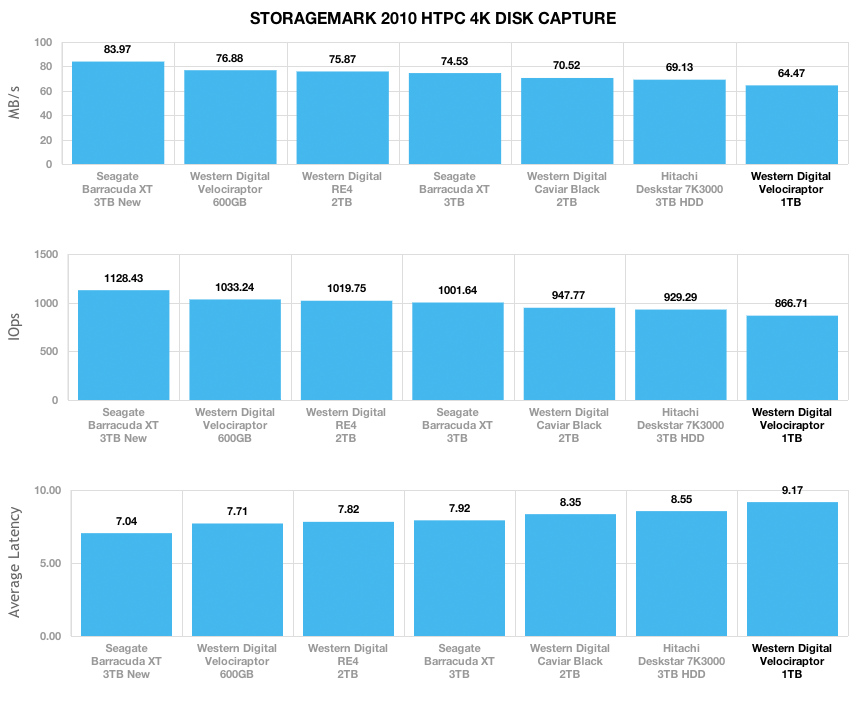 In an HTPC environment, the new 1TB VelociRaptor actually lost ground to the previous generation model, and fell to the back of the pack, behind the 7200RPM hard drives. In this area it had an average transfer speed of 64.47MB/s, compared to 76.88MB/s from the 600GB model.

Our next test covers disk activity in a gaming environment. Unlike the HTPC trace, this one relies heavily on the read performance of a drive. To give a simple breakdown of read/write percentages, the HTPC test is 64% write, 36% read, the Productivity test is 59% write and 41% read, while the gaming trace is 6% write and 94% read. The test consists of a Windows 7 Ultimate 64-bit system pre-configured with Steam, with Grand Theft Auto 4, Left 4 Dead 2, and Mass Effect 2 already downloaded and installed. The trace captures the heavy read activity of each game loading from the start, as well as textures as the game progresses. In this trace we recorded 426MB being written to the drive and 7,235MB being read. 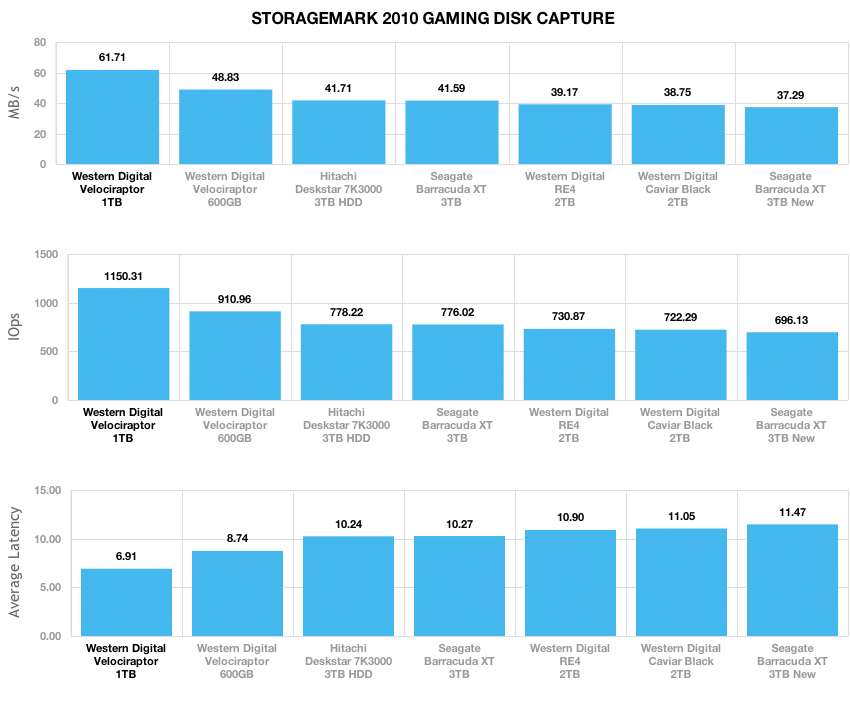 In a gaming setting, the new 1TB VelociRaptor excelled over the other consumer hard drives, posting strong gains against even the previous-generation drive with an average transfer speed of 61.71MB/s compared to 48.83MB/s.

While one might immediately assume that a 10,000RPM performance-oriented hard drive might have higher power consumption than a standard 7200RPM 3.5-inch hard drive, with the VelociRaptor that just isn’t the case. As we showed in our previous review of the 600GB VelociRaptor up against the 2TB Caviar Black, the 10K performance drive was able to beat it in every scenario. As we look at the latest-generation 1TB VelociRaptor, Western Digital has been able to squeeze out even more efficiency.

Western Digital lists the 1TB VelociRaptor as having a sequential transfer power usage of 5.8 watts, a random access usage of 5.1 watts, and an idle amount of 4.2 watts. In our tests we found sequential read and write power consumption to measure 5.48 and 5.51 watts respectively. In a random read scenario the drive used 5.39 watts, with idle coming up the listed amount at 3.91 watts. Startup requirements increased slightly over the previous generation model, needing 14.20 watts versus 13.96 watts before.

For users who want a combination of high speed storage and big capacity, there are few options that don’t break the bank. Sure there are caching solutions and SSDs meet the performance requirement, but as we’ve seen in our testing, there’s still plenty of room in the workstation and creative spaces for a high-performance hard drive. When we looked at the 600GB VelociRaptor, it held the title of fasted SATA hard drive, this time around the 1TB is no different.

We saw excellent performance in sequential access, offering transfer speeds in excess of 200MB/s. Even random access performance increased substantially over the previous generation model indicated in our 2MB random transfer test and 4K random write test. Mixed workloads also improved, although in smaller increments, but gains nonetheless. With these gains in performance, Western Digital was still able to squeeze more power efficiency out of the 1TB VelociRaptor.

In our real-world traces, we saw an initial slump in performance in an HTPC scenario, with the 1TB VR trailing behind the 7200RPM hard drives. In our Gaming trace though, performance spiked in favor of the new VelociRaptor as it topped the chart. In the majority of tests, the new 1TB model offered mild to significant gains over the previous-generation 10K RPM VelociRaptor and came in well above 7200RPM 3.5-inch drives, proving that hard drives can still innovate.

The Western Digital 1TB VelociRaptor showed substantial gains over the prior 600GB VR. WD retains the crown for fastest SATA hard drive on the market while bumping capacity by 400GB; providing a very appealing value proposition for those who want a blend of high performance storage, capacity and low cost.