Migrating VMs can be a huge pain in the neck for companies wanting to move from traditional architectures to the cloud; live migration is even worse. From the service provider perspective, they need a quick and relatively painless way to migrate VMs to both make customers happy, but perhaps more importantly in their view, get to the point of billing. JetStream Migrate is designed exactly for this purpose, helping service providers migrate customer VMs to the cloud completely, reliably, and without appliction service interruption.

Migrating VMs can be a huge pain in the neck for companies wanting to move from traditional architectures to the cloud; live migration is even worse. From the service provider perspective, they need a quick and relatively painless way to migrate VMs to both make customers happy, but perhaps more importantly in their view, get to the point of billing. JetStream Migrate is designed exactly for this purpose, helping service providers migrate customer VMs to the cloud completely, reliably, and without appliction service interruption. 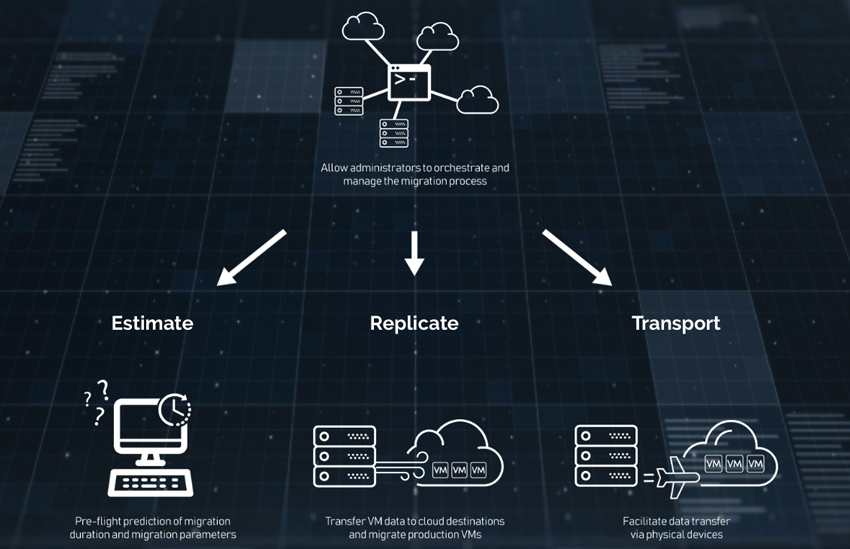 JetStream Migrate is a lightweight application that will live migrate virtual machines from on-premises VMware environments to cloud-based VMware environments. The secret sauce for JetStream is by acting as an IO filter integrated with vSphere through its VMware vSphere APIs for IO Filtering (VAIO). Being an IO filter, JetStream Migrate can seamlessly integrate with any VMware environment without any disruption to storage, backup, or DR solutions. The software installs as a VIB and is managed through vCenter. VMs continue to run while they are being migrated with no interruption from the user. Much of this process is handled by the service provider, giving them control over the migration during agreed upon service windows, while the customer has the comfort of relying on a tool that's native within their VMware environment.

Stating something is easy and proving it are two different worlds. Once JetStream Migrate is installed it can be accessed through vSphere. Running across the top of the screen are the main tabs of Migrate, Estimate, Statistics, Configure, and Audit Logs. 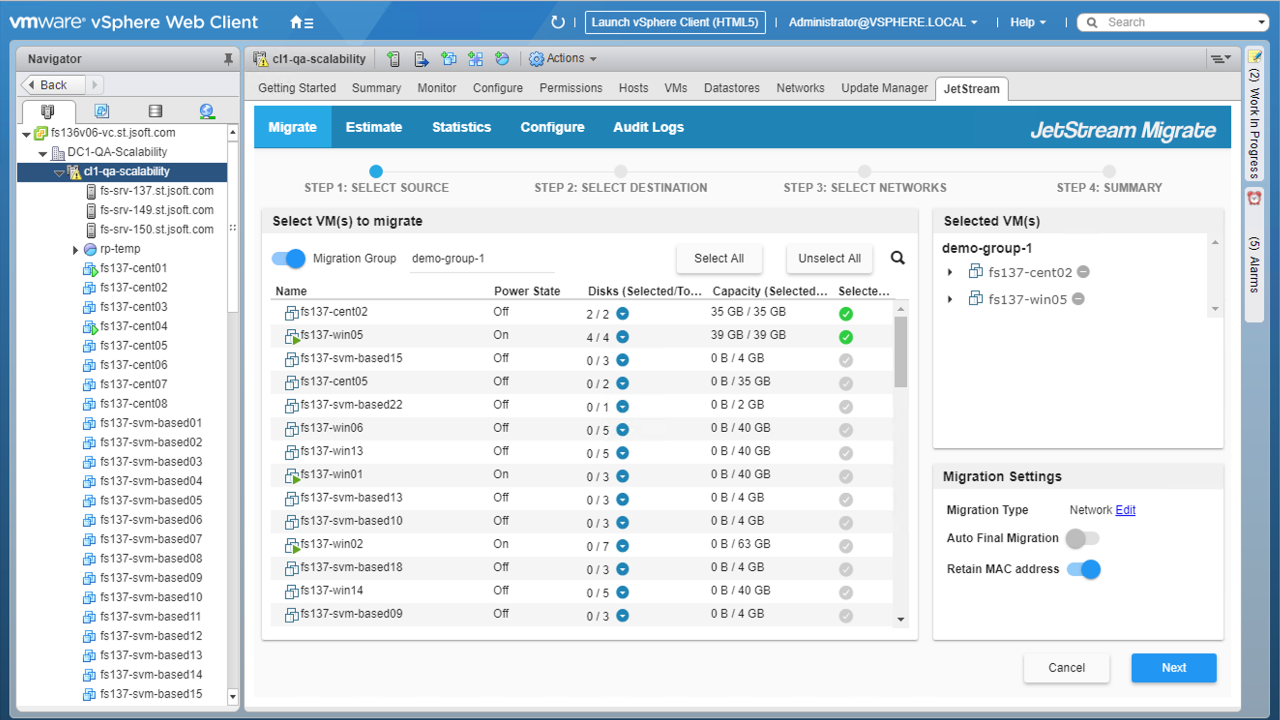 A very interesting feature is the Migration Estimator. Just like the name implies, this tool looks at the virtual disks size and network traffic and lets users know roughly how long it will take to migrate the VM or group of VMs. The Migration Estimator needs to run for some time to give users an accurate idea of what to expect, 24 hours seems to give it enough time to give a good estimation. Of course there's always the sneaker-net option that involves physically shipping a large data set, which JetStream estimates at 3 days in the estimator, but of course could vary based on several logistical issues. In this case, while the storage device is in transit, newly written data is detected by the IO Filter and propagated to the destination. 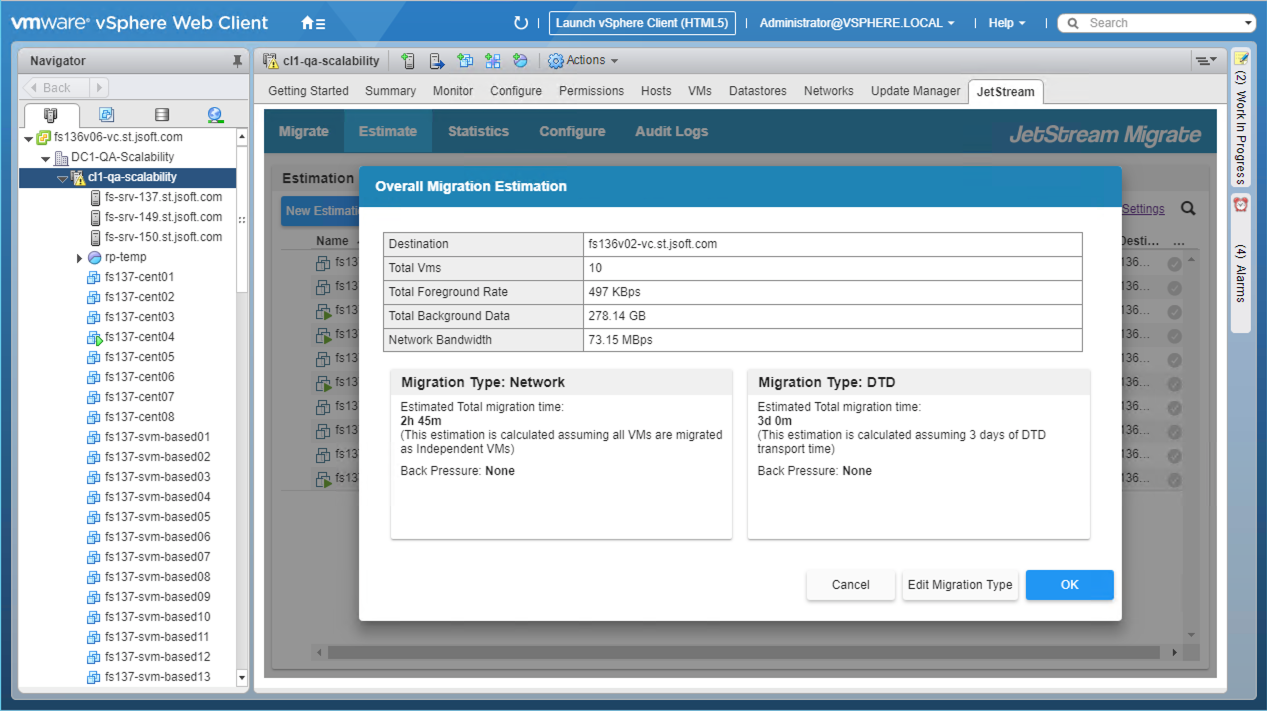 As stated, users can migrate one VM or several at the same time. This will be largely dependent on what needs to be moved (application dependencies for instance) and how much network traffic can be tied up. Users can select the type of migration and its destination. They will be presented with info on the migration before it starts. 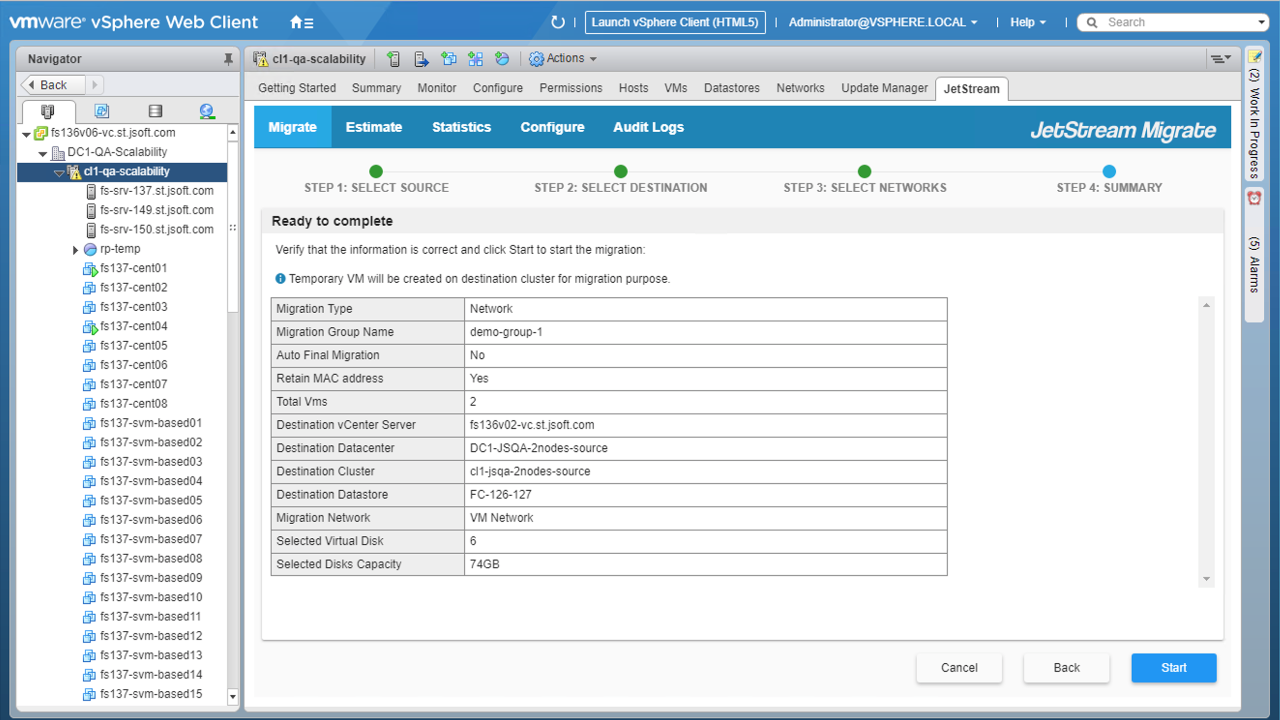 Once everything is selected and the migration has begun, users can check out all the pertinent information such as the overall estimate, the target destination, how many VMs are migrating, the total size of both the foreground and background data, and network bandwidth. Users can ensure that the shadow VMs at the destination point is connected as well as the HA slave. 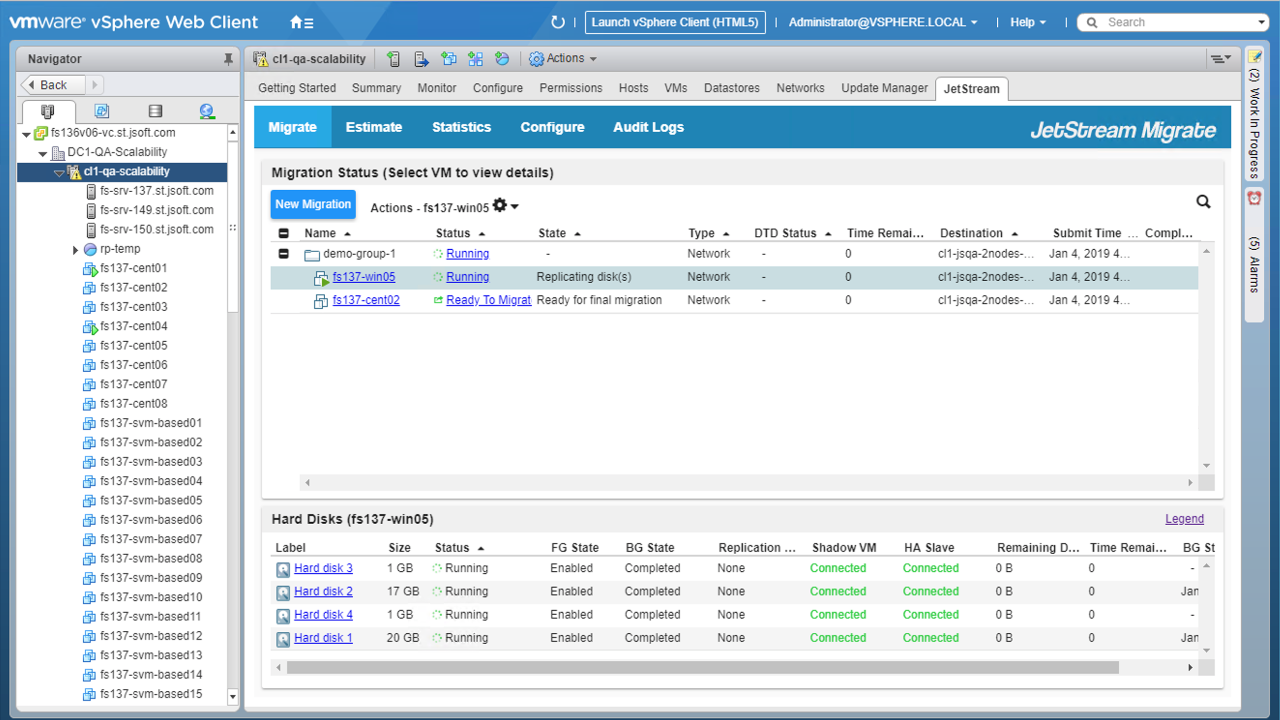 Non-disruption of the migrating VMs isn’t the same thing as disruption that can be caused to storage or the network from large files being moved. To help counter this, JetStream Migrate offers real-time performance reporting and tuning. If the migrating VM is causing an issue, the writes can be throttled back as well as the replication rate. 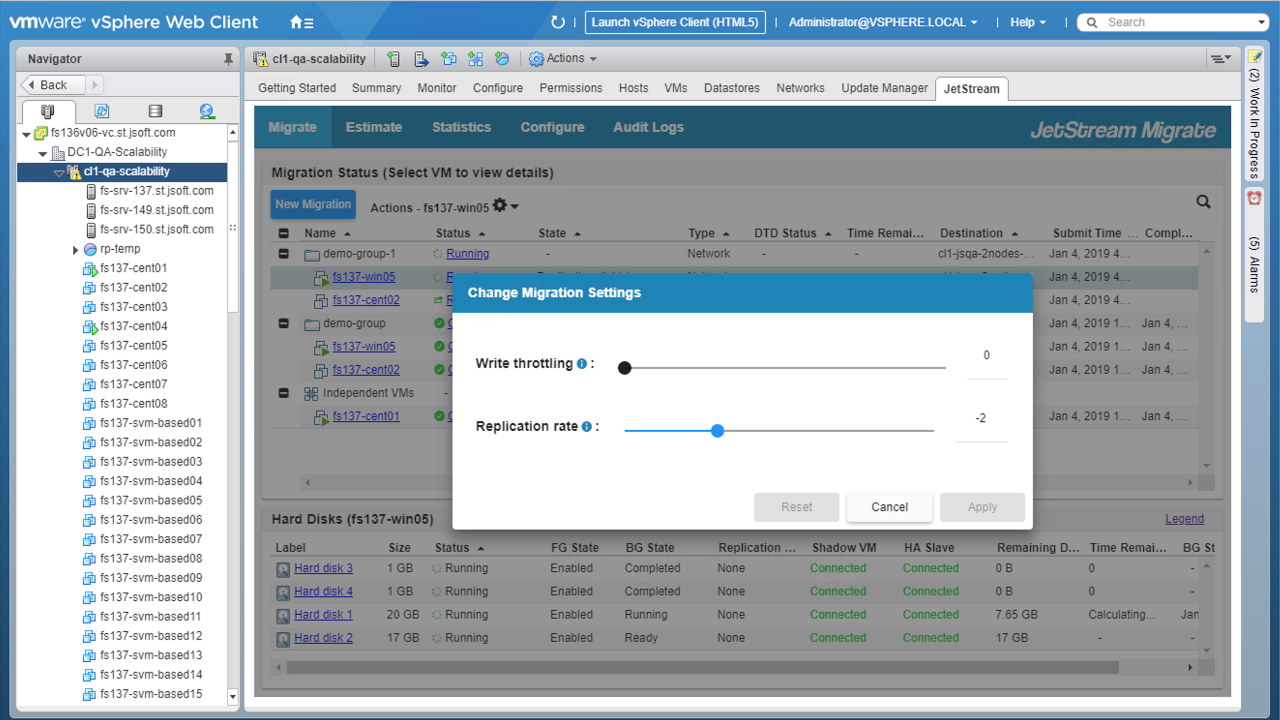 With Statistics, users can see real-time performance or see how the performance of the migration went after the fact. This is particularly useful for the service provider as they watch the migration in real time as it provides actionable insights throughout the process. 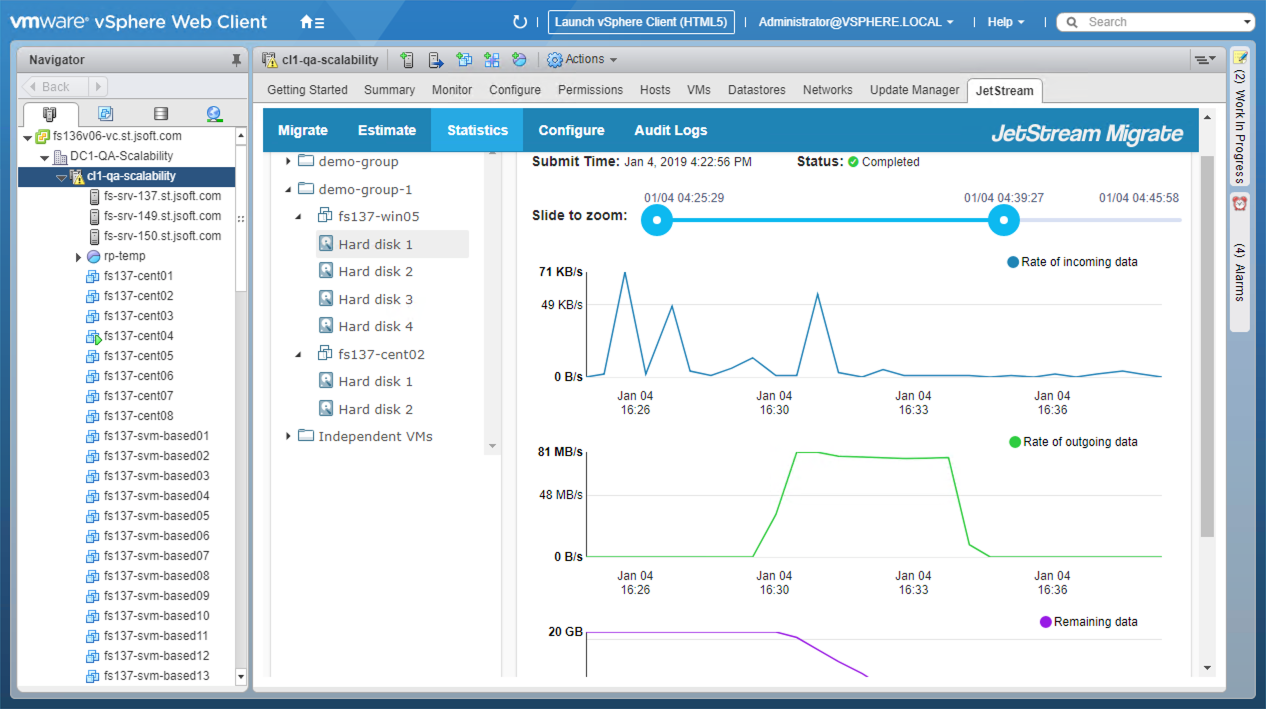 JetStream Migrate aims to take the pain out of VM migration and live migration from on-prem VMware environments to cloud-based VMware environments. This allows for users to get back to work and get back to billing without worrying about massive amounts of disruptions. JetStream Migrate acts as an IO filter integrated through vSphere, leveraging VAIO. This is the foundation of their product along with how they are easing the migration process.

As far as using it, it is pretty straightforward. The estimation tool is nice as it allows users to know how long and how many resources need to be dedicated to a migration. Every step of the process the migration can be monitored and even adjusted if too many resources are being used up. This marks a fairly simple process that allows hosting providers to move huge amounts of data while saving costs and resources. This migration can be done automatically, over any type of network connection, with virtually no interruption to hosting providers’ customers' operations.

It's not often we dive into software tools like this, but when we do it's great when everything just works. The JetStream tool doesn't look all that fancy on the surface, but the work under the covers is fantastic. Further, when talking to service providers about the value it provides, it's pretty clear that once they use this, there's no going back. As more organizations contemplate migrating VMware VMs to the cloud, JetStream Migrate is set up to be an invaluable partner in that process.