The NETGEAR ReadyNAS 2312 is a high-density 12-bay 1U rack NAS designed for SMB’s looking for low-cost storage with future expansion potential. The RN2312 features its OS business features that users have grown accustomed to, including automated backup, disaster recovery, and 5 levels of data protection. This 1U NAS is ideal for environments requiring high-performance and data scalability at a low initial investment.

The NETGEAR ReadyNAS 2312 is a high-density 12-bay 1U rack NAS designed for SMB’s looking for low-cost storage with future expansion potential. The RN2312 features its OS business features that users have grown accustomed to, including automated backup, disaster recovery, and 5 levels of data protection. This 1U NAS is ideal for environments requiring high-performance and data scalability at a low initial investment.

The RN2312 appears to be an economical decision for SMB’s, providing a generous raw storage capacity up to 144TB. It also comes in different SKUs, such as diskless, 12x 4TB HDD, 12x 6TB HDD, or half populated with 8TB HDD’s, giving SMB’s several different options that best align with their budget. It also features comprehensive storage functionality and data protection software in its ReadyNAS OS.

The NETGEAR ReadyNAS 2312 is a 12-bay 1U rack NAS, providing up to 144TB of storage capacity, making it one of the industry’s highest storage density NAS in a 1U form factor. The front of the device sports a sleek aluminum grill that incorporates a ventilated design for efficient airflow. On the top-left of the front, is the control panel that provides a power and reset switch, along with four indicator lights for system health.

The rear panel of the RN2312 is home to the device’s connectivity. On the left, there is the 350W power supply. The middle has the UART port, two USB 3.0 ports, and the quad gigabit Ethernet interface. The back also uses a ventilated system for additional airflow. 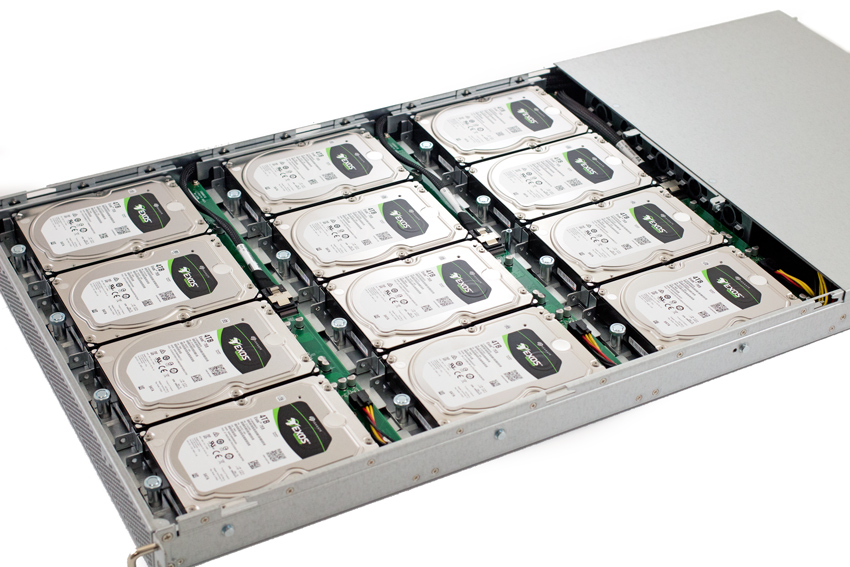 Removing the top cover exposes the twelve 3.5” HDD drive bays that are tooless.

Netgear’s ReadyNAS OS (currently in version 6.9.4) powers all ReadyNAS devices including the RN2312. We have looked at ReadyNAS OS a few times in the past and the layout of the GUI hasn’t changed much over time.

The landing page gives users info such as the device and its information, how much capacity has been used, what applications are running, and the featured apps. 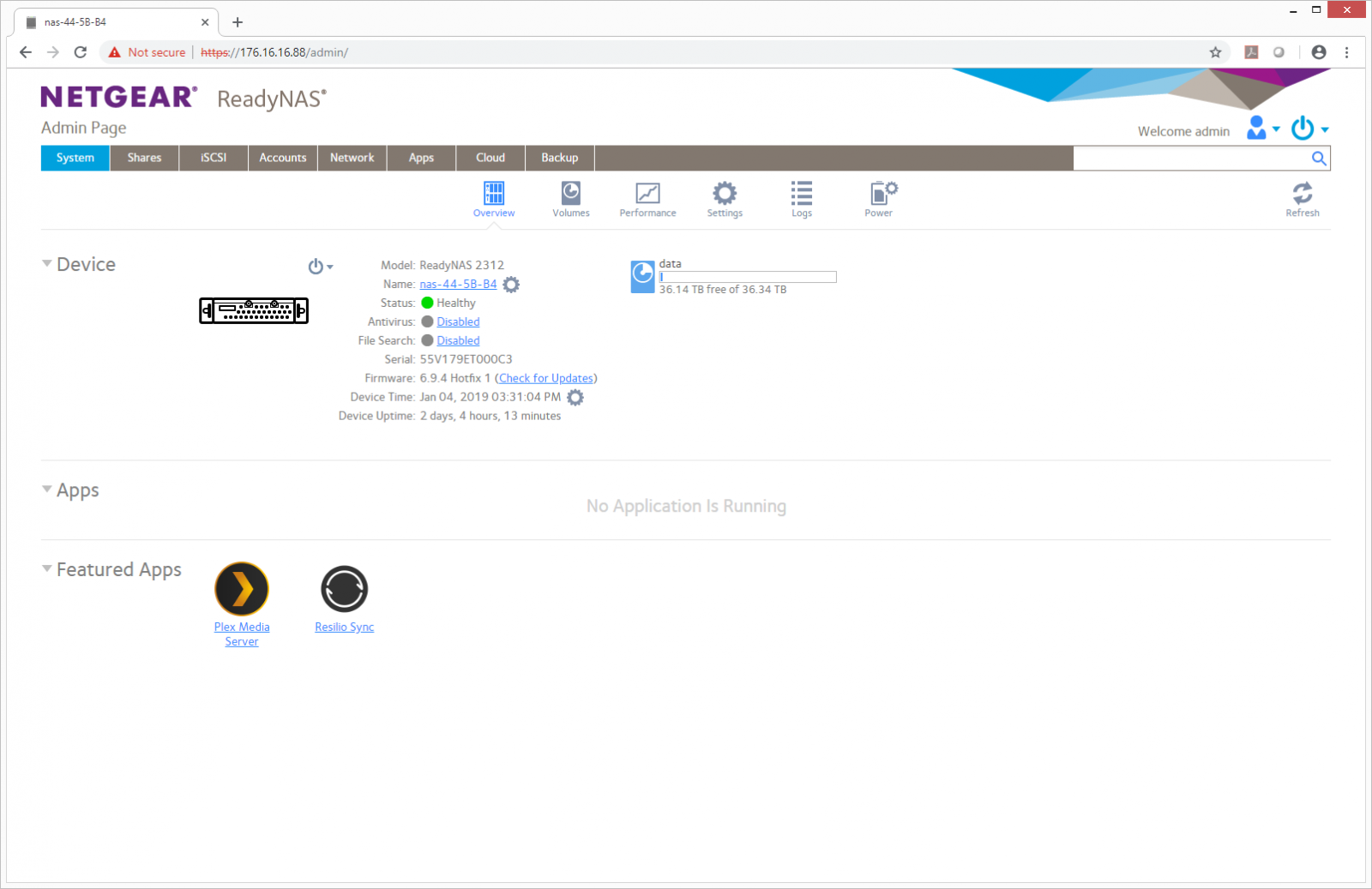 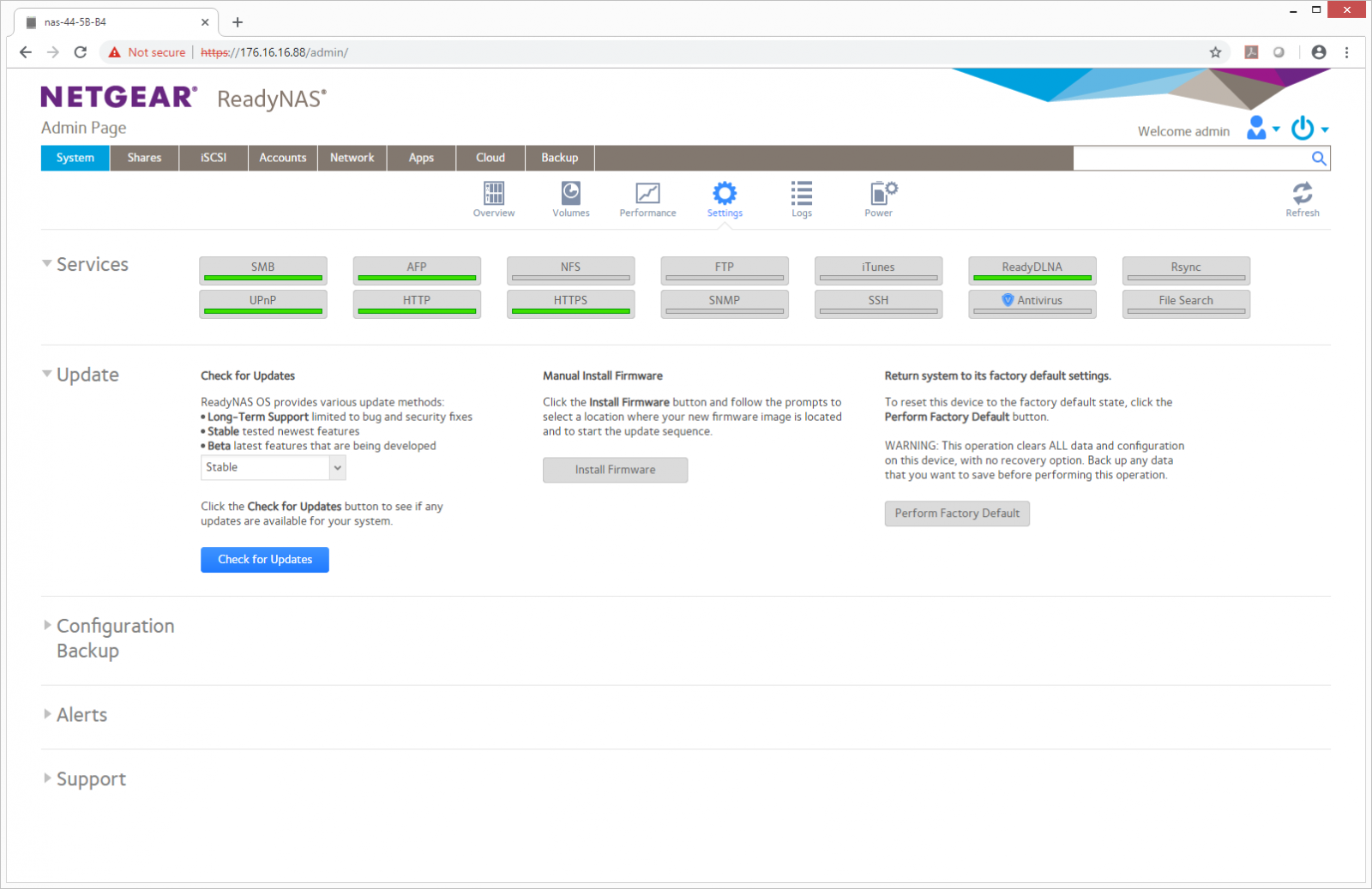 The Shares tab has the name, protocols, and snapshots of the shares. Here permissions can be viewed and changed by the admin. The free space can easily be noted on the left side. 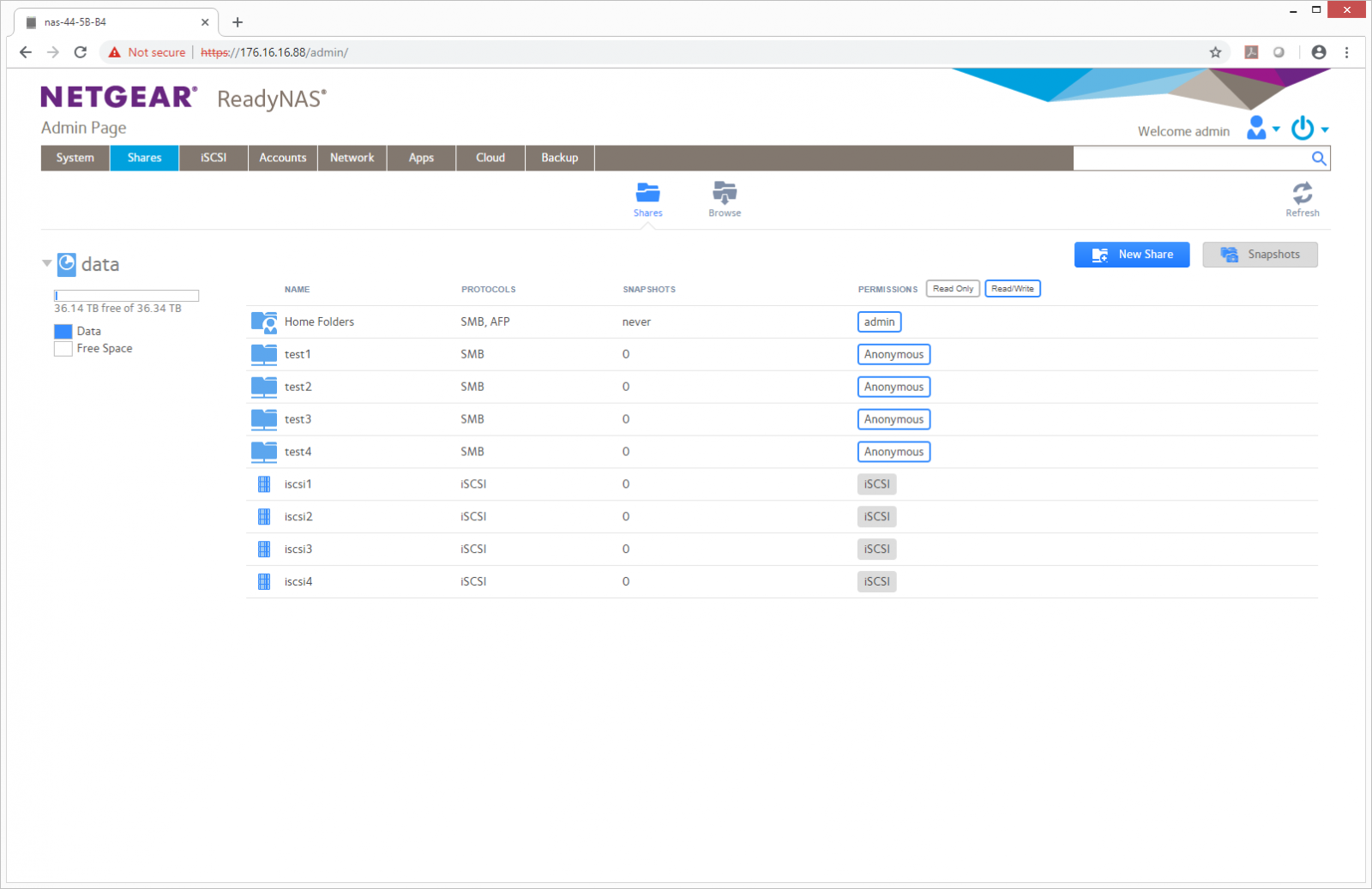 The Apps tab is a way to get into the NAS’s app “Store” to download the apps needed for users’ day-to-day operations. 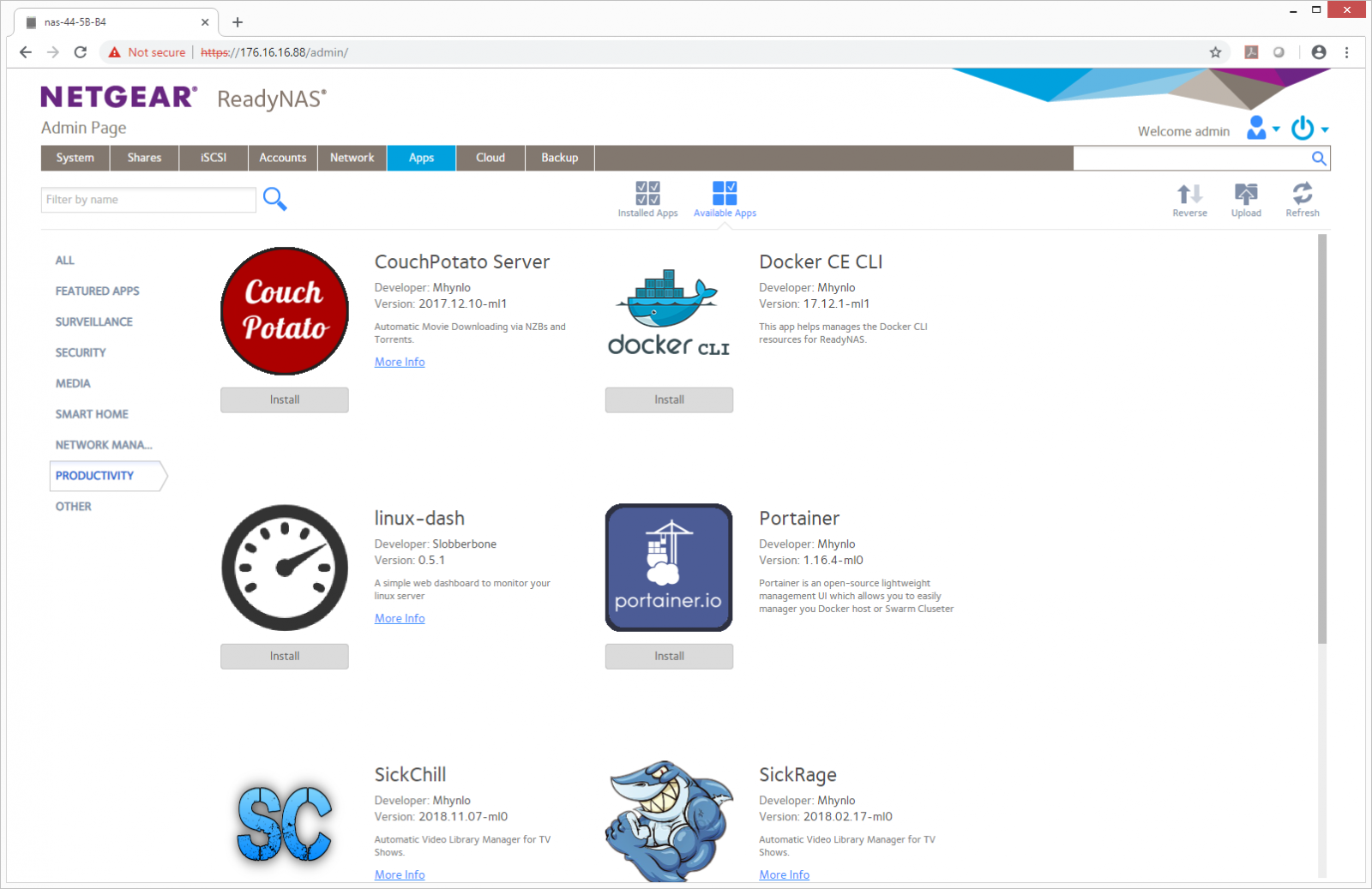 The Cloud tab lets users connect to either Netgear’s ReadyCLOUD or ReadyNAS Vault or several other public cloud options. 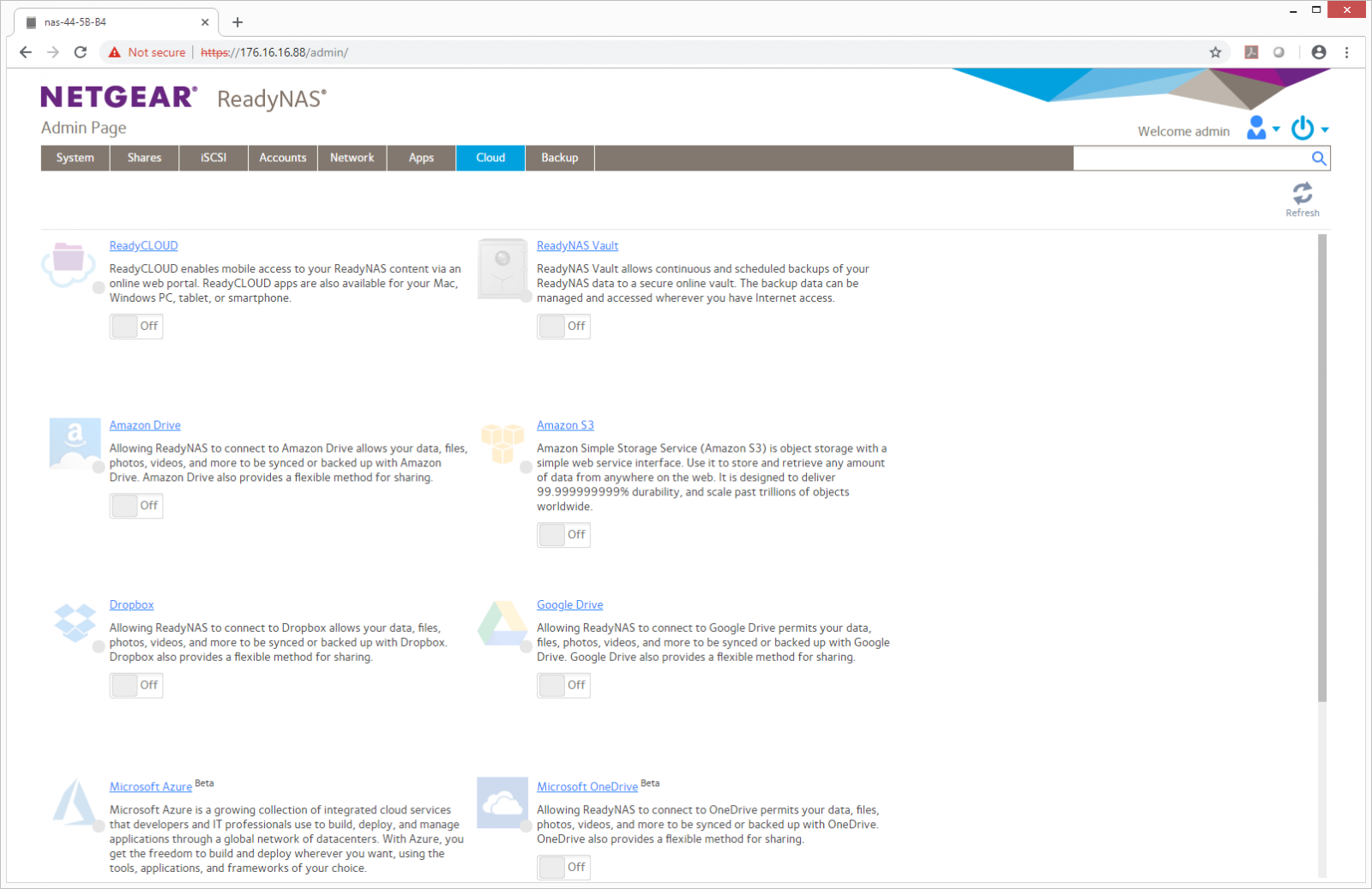 And the Backup tab allows users to schedule, set the source of, and see the status of backups. Through this tab is can easily been seen when the last backup was. Here the ReadyDR feature can be enable or disable as well. 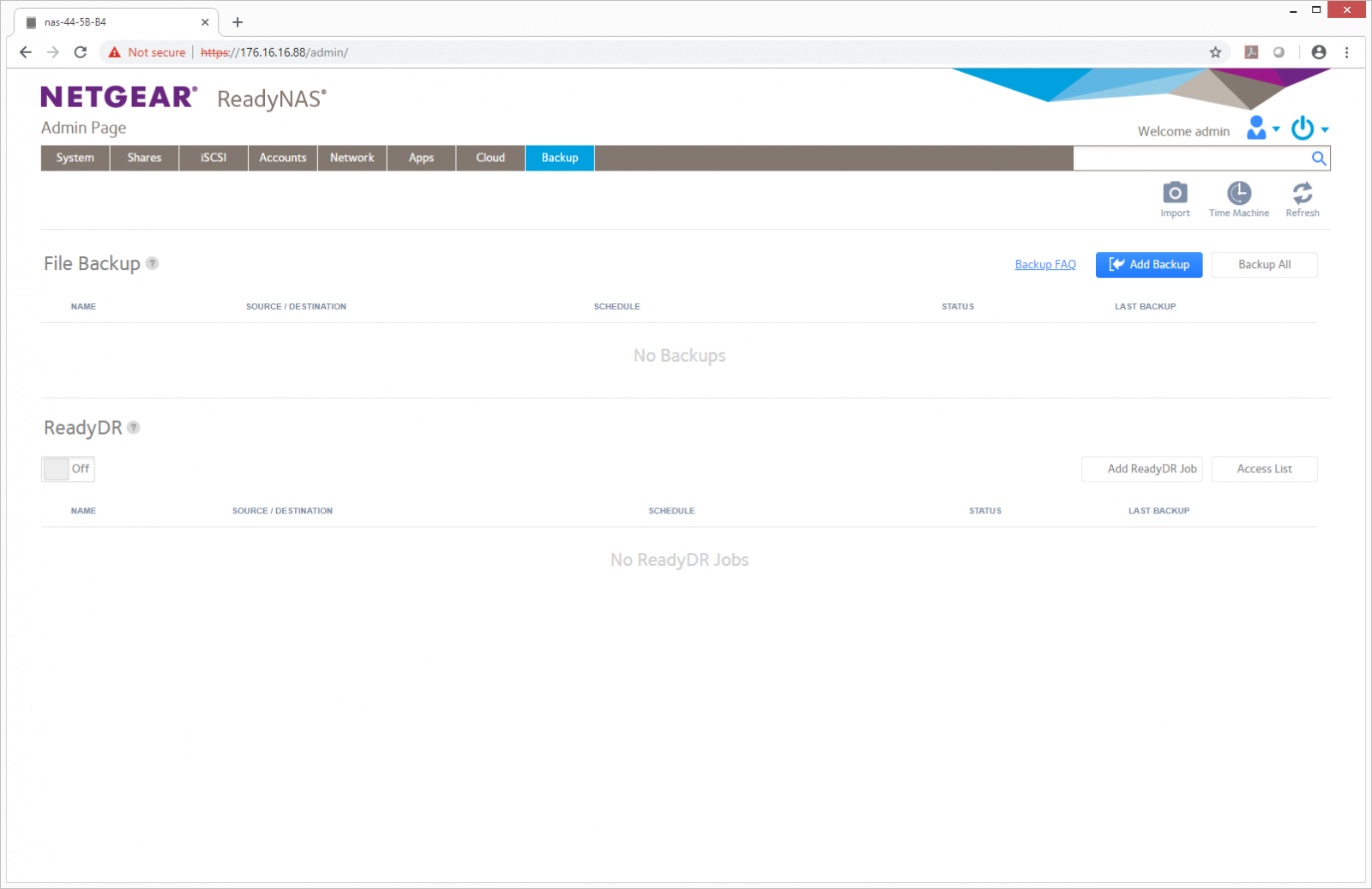 In the first of our enterprise workloads, we measured a long sample of random 4k performance with 100% write and 100% read activity using the CIFS and iSCSI protocol in RAID6. Here, the RN2312 showed its best performance in iSCSI, with 1,409 IOPS and 768 IOPS in write and read, respectively. CIFS showed a write performance of 830 IOPS and reads of 617 IOPS.

Average latency told a similar story with iSCSI keeping the lead in both reads and writes. CIFS fell behind again with 414.19ms read and 310.62ms write, while iSCSI posted results of 333.11ms read and 182.80ms write.

In terms of standard deviation during our 4k tests, iSCSI was, again, the best configuration for reads and writes, posting 361.45ms and 810.10ms, respectively, while CIFS showed a read latency of 426.03ms and writes of 1,297.91ms.

In our next benchmark, we doubled the transfer size to 8K. Read performance was nearly identical, with 57,153 IOPS in our iSCSI configuring, and 57,091 IOPS in CIFS. When looking at writes, iSCSI took a big lead, showing 49,162 IOPS compared to 35,033 in CIFS.

In our next four charts, we will be showing results based on a protocol consisting of 70% read operations and 30% write operations with an 8K transfer size. As such, the workload is then varied from 2 threads and a queue depth of 2 up to 16 threads and 16 queue. Here, the iSCSI protocol was the only configuration that had any significant performance gains as the test progressed, posting a range of 557 IOPS (2T/2Q) to 822 IOPS (16T/16Q). CIFS started off at 339 IOPS and finished at 395 IOPS, showing very little progression throughout.

Similar to throughput, the RN2312 iSCSI configuration showed better performance with 7.17ms at 2T/2Q and finishing with 310.88ms, while CIFS started off at a slightly higher latency of 11.77ms, but increased dramatically at the end, finishing off at 645.14ms.

When looking at max latency during our 8K 70% read operations and 30% write test, results were sporadic, as illustrated in the chart below. Kicking off the test, CIFS showed a latency of 735.33ms, but has a dramatic spike in 2T/4Q to 5,726.2ms, the highest latency CIFS saw in the entire test. Moving along, we see sporadic increases and drops in latency until finishing with a latency of 4,987.8ms. Using our iSCSI configuration, though not as dramatic in increases and drops, we see quite a few ups and downs throughout. Kicking off the test, iSCSI saw a latency of 1,086.21ms and ended with a 6,368.73ms latency level.

The final synthetic benchmark utilizes much larger 128k transfer sizes with 100% read and 100% write operations. In this scenario, both configurations posted very similar results, with CIFS showing 462.9MB/s read and 428.2MB/s write, while iSCSI showed 462.7MB/s and 430.7MB/s in reads and writes, respectively.

The NETGEAR ReadyNAS 2312 1U rack NAS, while it may be small in size, the same can’t be said about its storage capacity, as it provides a maximum capacity of 144TB. The RN2312 comes with its ReadyNAS OS, a data management software that provides businesses with automated backup and disaster recovery and 5 levels of data protection, such as Flex-RAID, built-in anti-virus, incremental backup copies with unlimited snapshots, bit-rot protection against media degradation, and replication.

Jumping into performance, the NETGEAR ReadyNAS 2312 showed overall decent results in most of our benchmarks. In our 4K tests, we saw numbers up to 1,409 IOPS and 768 IOPS in write and read, respectively, and an average latency as low as 333.11ms read and 182.80ms write, all in iSCSI configuration which was our overall best performing configuration. In our 8K testing, we saw numbers go as high as 57,153 IOPS in reads and 49,162 IOPS in writes. With our large-block sequential benchmark, we saw speeds go up to 462.9MB/s in reads and 430.7MB/s in writes.

The NETGEAR RN2312 provides a large data capacity in a small 1U rack NAS, and is an ideal candidate for SMB’s looking for an economical storage solution.