In every sense of the word, the 96GB Kingston SSDNow V+100 is a “midrange” SSD. Positioned as an entry-tier enterprise class drive in Kingston’s SSD catalog, the drive’s oddball 96GB capacity puts it squarely between the more common 64GB and 128GB solutions. A cynical take on all of this would be to point out that the V+100 won’t be competing for honors as the smallest, fastest, lightest, or most capacious SSD in any class. But with a few substantive updates to previous devices holding down this position in Kingston’s broad lineup–most notably, a new controller and a cleanup function that works with older, pre-TRIM operating systems–the V+100 may prove itself to be just what the doctor ordered for certain applications.

In every sense of the word, the 96GB Kingston SSDNow V+100 is a “midrange” SSD. Positioned as an entry-tier enterprise class drive in Kingston’s SSD catalog, the drive’s oddball 96GB capacity puts it squarely between the more common 64GB and 128GB solutions. A cynical take on all of this would be to point out that the V+100 won’t be competing for honors as the smallest, fastest, lightest, or most capacious SSD in any class. But with a few substantive updates to previous devices holding down this position in Kingston’s broad lineup–most notably, a new controller and a cleanup function that works with older, pre-TRIM operating systems–the V+100 may prove itself to be just what the doctor ordered for certain applications. 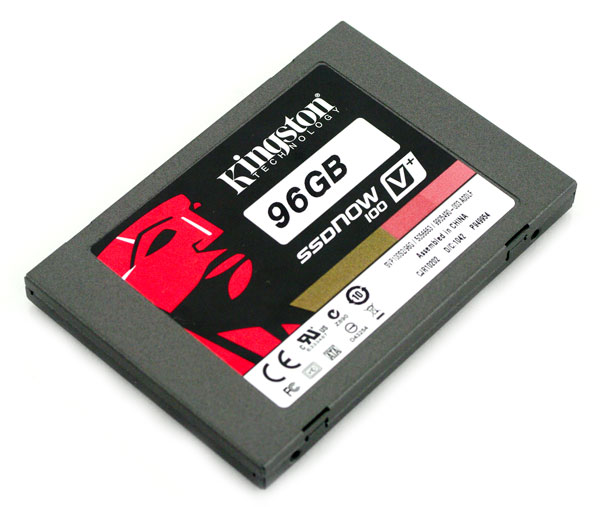 On the outside, the V+100 looks a lot like the rest of Kingston’s middle-of-the-road, 2.5-inch format SSDs. In hand, however, users of previous Kingston SSDs will feel a difference.

That’s because the V+100’s case is made from stamped steel, as opposed to the cast alloy housings common in this class. While those with ultraportable devices may not consider this added weight a positive attribute, the case design and construction lends a particularly solid feel to the V+100.

Four case screws hold the two halves of the V+100’s enclosure together. As is usually the case, opening the drive (technically, removing the warning label covering the fourth screw head) will void your warranty. 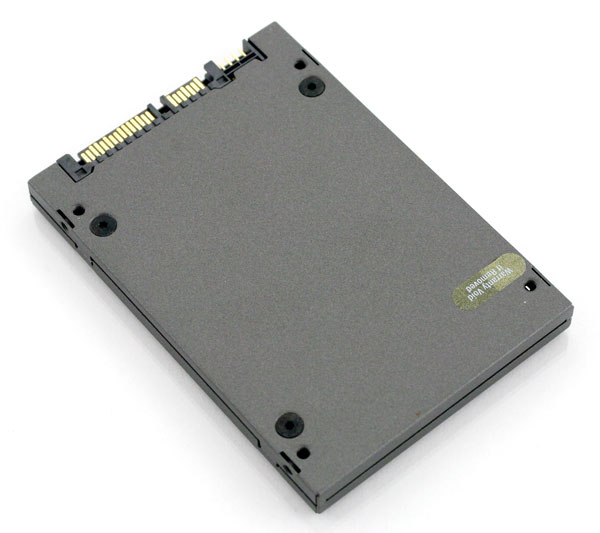 Kingston used the Toshiba T6UG1XBG, the same chip powering storage in the latest-gen Apple MacBook Air, to power the latest generation of the SSDNow. This controller offers a couple of key advantages over others on the market: extremely low power consumption (more on that a little later in the review), and the ability to perform OS-independent garbage collection (i.e. on operating systems that don’t support the TRIM protocol). 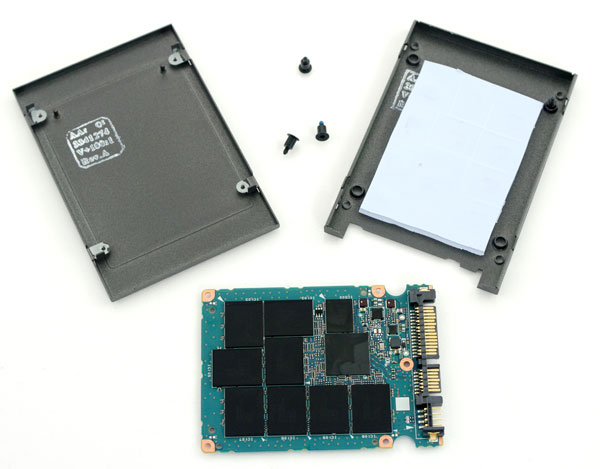 For SSDs and other devices using flash storage, garbage collection plays a key role in ensuring optimal, consistent write speeds over the life of the device. On the flip side, heavy-handed cleanup algorithms can appreciably shorten the life expectancy of an SSD’s flash chips. While it’s important to be aware of this trade-off, the Toshiba controller’s advantages over its predecessor should provide tangible, measurable performance benefits for most users–especially those running operating systems earlier than Windows 7. 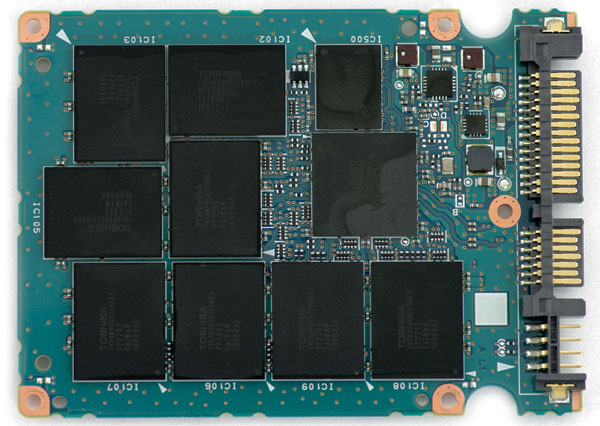 The Toshiba controller is paired with Toshiba’s TH58NV NAND chips for storage and a 128MB Micron OKA17 buffer. An adhesive-mounted thermal pad serves as a heat buffer/shock absorber for the PCB and its contents. 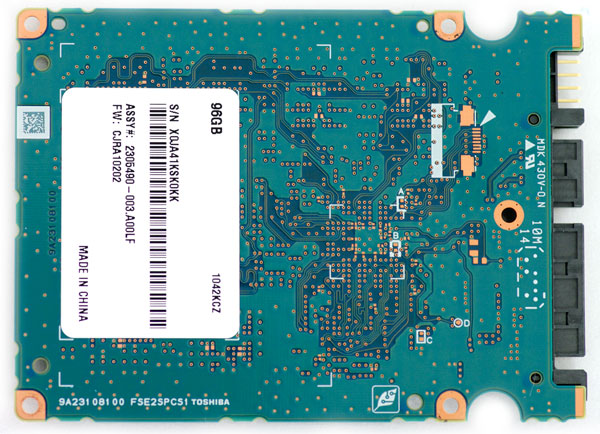 In light of its somewhat unusual capacity, it’s hard to find analogous devices against which the V+100’s performance/price ratio can be fairly measured. In terms of capacity, our V+100 falls in most closely with Corsair’s F90. While the V+100 can’t match the F90’s performance across the board, it’s also worth noting that it doesn’t match the F90’s price either, coming in appreciably cheaper than the latter drive. 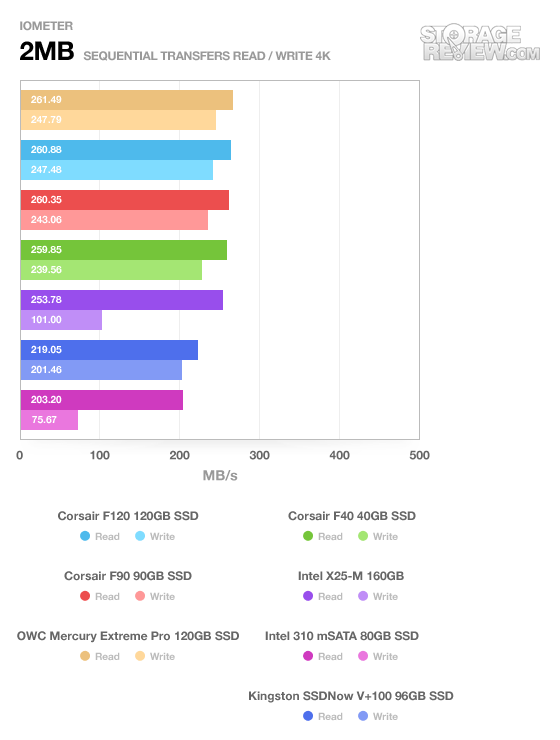 In our 2MB sequential read/write testing, the V+100 turns in respectable performance. It won’t touch SSD class leaders for speed, but it does have an edge in write speeds over either the venerable but consumer-oriented Intel X25-M or the smaller than a credit-card sized Intel SSD 310. 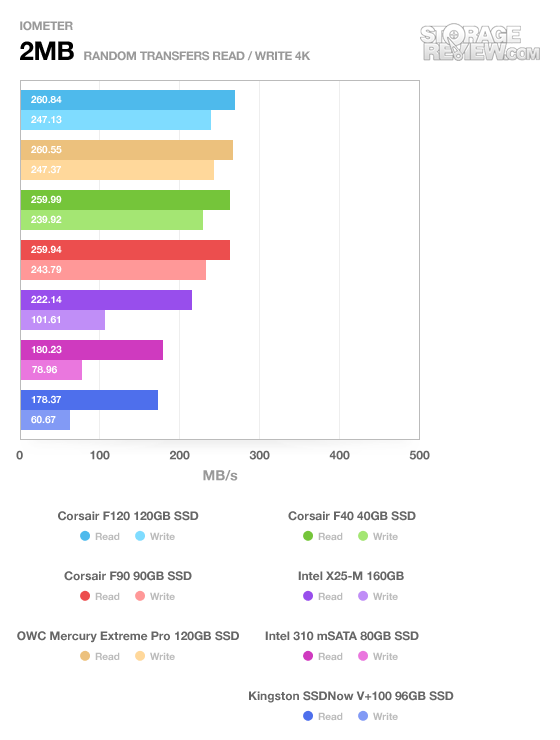 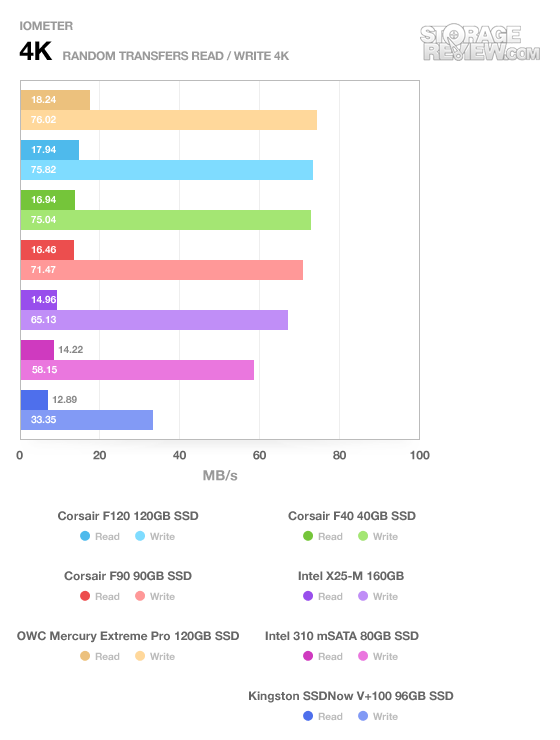 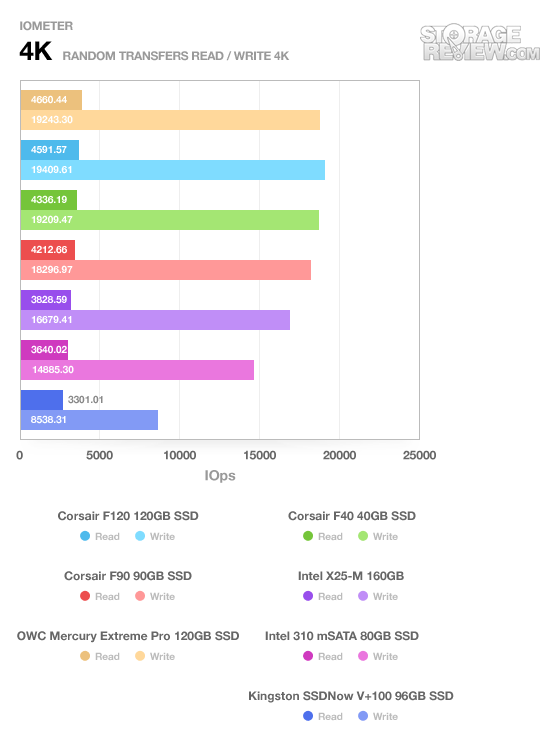 Switching over to smaller 4K random reads/writes, the V+100 similarly fails to impress, lagging behind the two aforementioned Intel devices in both transfer speed and operation volume. 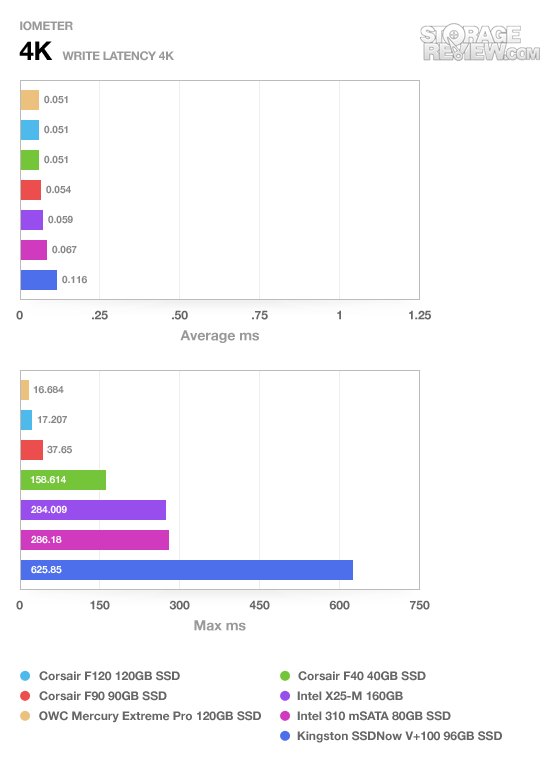 As before, in terms of write latency, the V+100 simply can’t compete with this admittedly very strong field of top-tier drives. Average write latency is approximately 70% slower than the next closest device, with maximum times completely redefining the scale for this class.

Likewise, all of these results correlate closely with our top-level testing results from CrystalDiskMark, suggesting that the V+100 is a solid–if somewhat unremarkable–performer given its positioning within Kingston’s lineup. 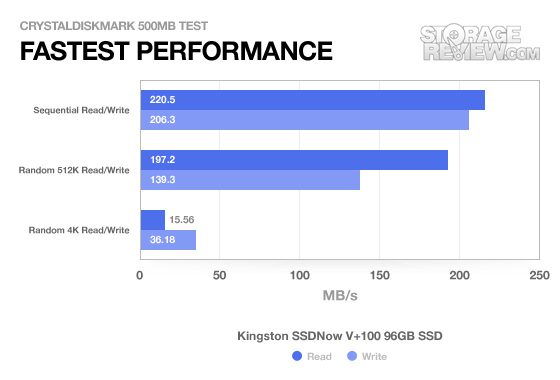 To better simulate real-world performance, we ran the V+100 through our series of IOMeter test profiles (which use data-transfer simulations for Database, Workstation, Web Server, and File Server environments). 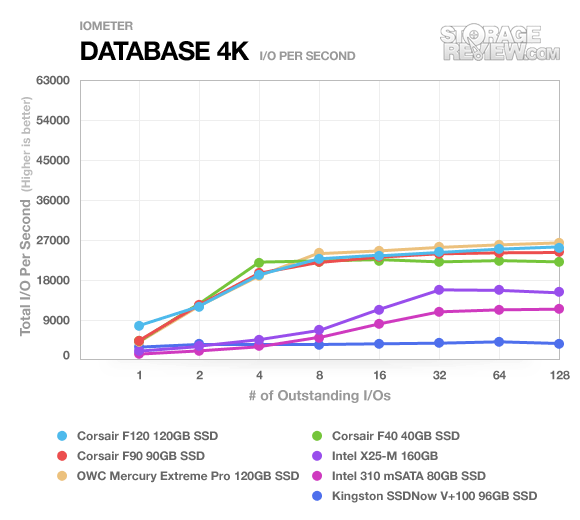 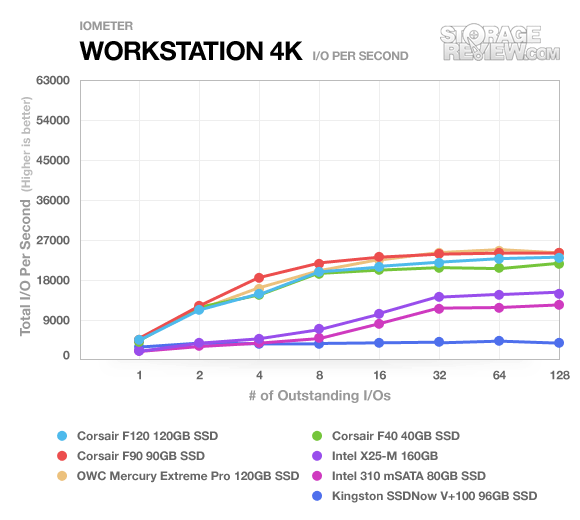 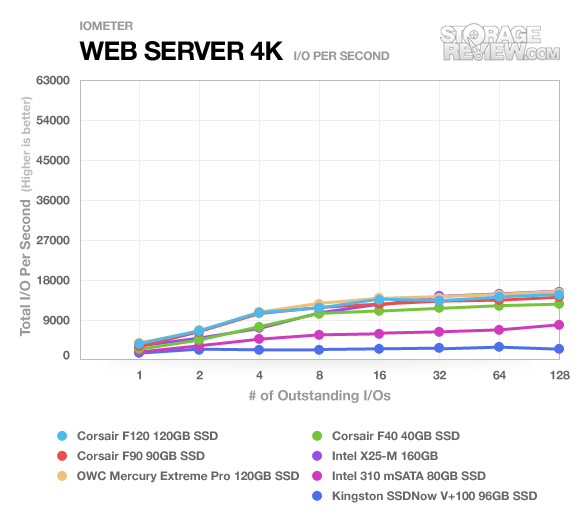 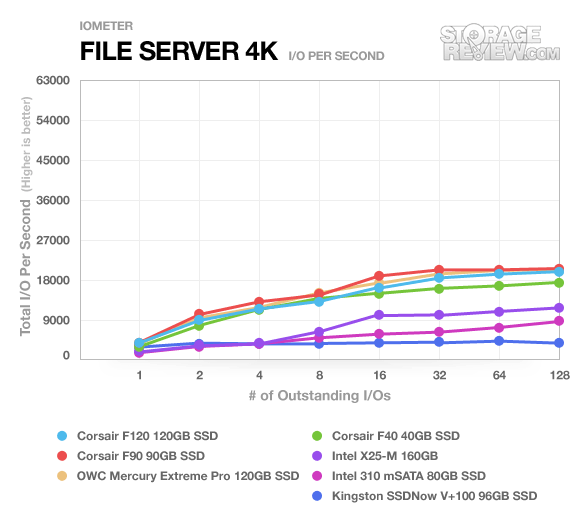 What’s most disappointing here is the complete lack of scaling on this drive’s part in any of the four tests. With low initial performance and almost no discernible ramp-up as demands increase, these measurements call into question the V+100’s NCQ implementation.

Our proprietary StorageMark testing provides a different perspective on performance analysis, allowing us to get a better sense of how various drives stack up in commonly encountered usage situations using I/O traces of actual disk access patterns. The first trace, designed to evaluate drive performance in a multimedia or home theater PC (HTPC) role, includes activity captures of: playing one 720P HD movie in Media Player Classic, one 480P SD movie playing in VLC, three movies downloading simultaneously through iTunes, and one 1080i HDTV stream being recorded through Windows Media Center over a 15 minute period.

(Note that higher IOps and MB/s rates with lower latency times are preferred.) 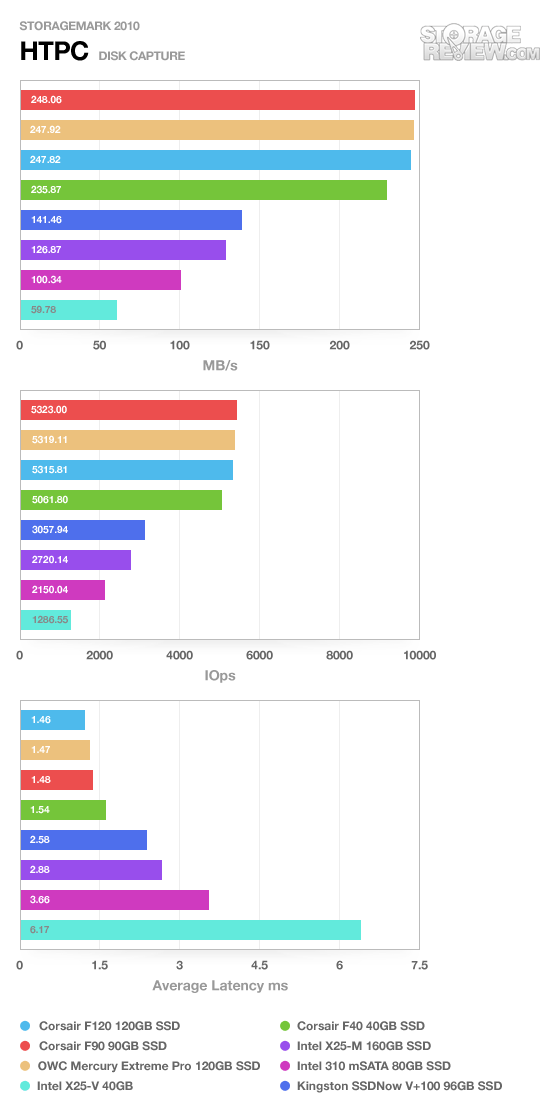 The difference between these real-world results and some of the synthetic benchmark outcomes is substantial. While the V+100 still doesn’t challenge the fastest offerings from Corsair and OWC, as a multimedia solution the Kingston drive proves to be a solid choice.

Our second StorageMark test presents a distinctly different scenario, focusing on a drive’s performance in what may be loosely termed a “productivity” setting. In short, this situation measures performance under the kinds of usage most of us encounter every day, including web surfing, word processing, and checking email. To this end, our Productivity trace includes: a three hour period operating in an office productivity environment with 32-bit Vista running Outlook 2007 connected to an Exchange server, web browsing using Chrome and IE8, editing files within Office 2007, viewing PDFs in Adobe Reader, and an hour of local music playback with two hours of additional online music via Pandora. 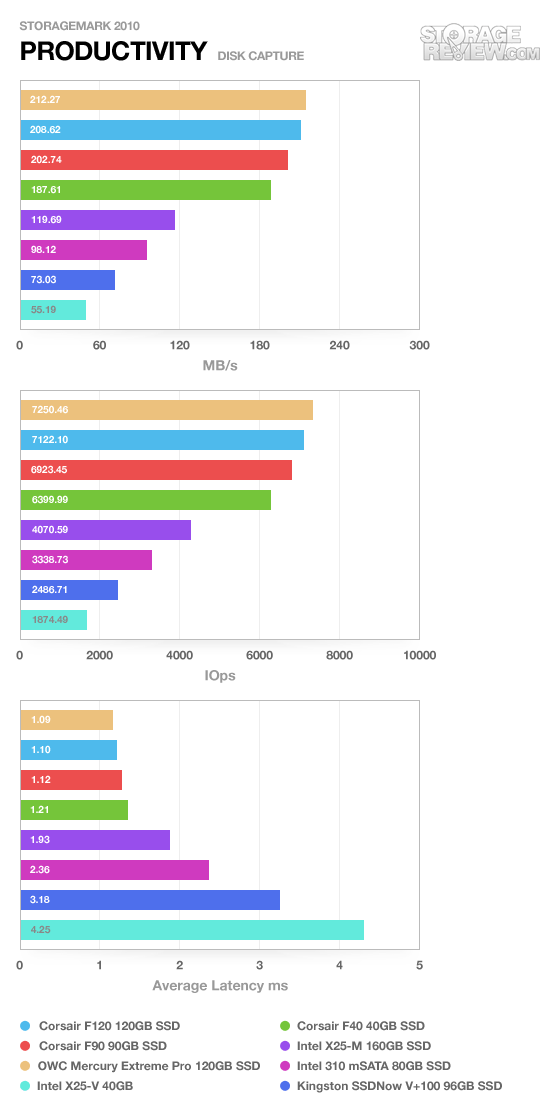 In these general-use situations, the V+100’s performance was slightly less robust, falling in again with Intel’s X25 offerings in terms of overall performance. 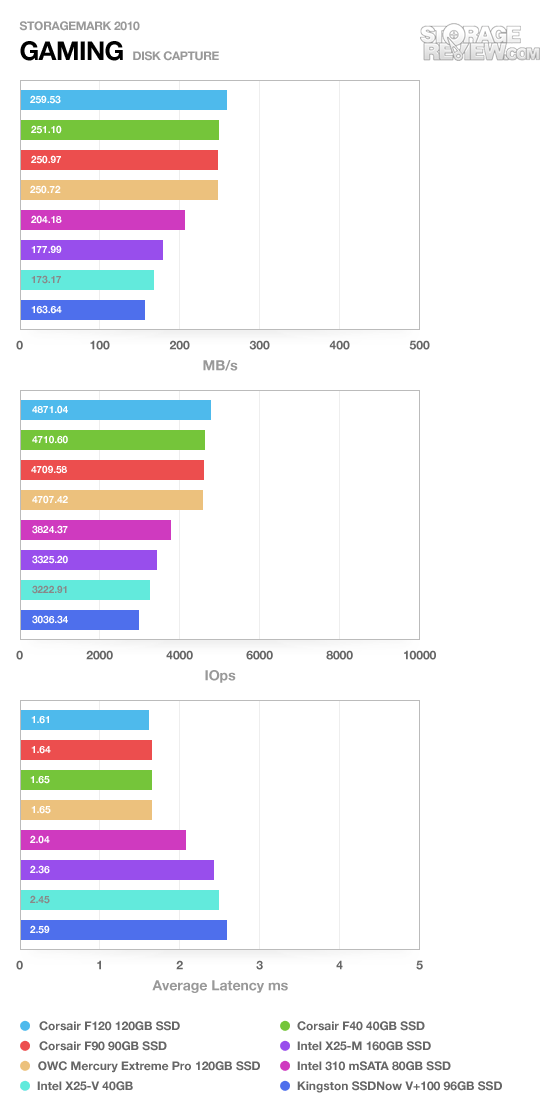 The V+100 is somewhat weak in this area as well, though performance (as above) aligns closely with many other similar devices. As a gaming drive, it’s probably safe to say that this device won’t be topping many enthusiast system-builder’s lists, instead targeting users looking for the best bang for their buck.

If results from both real-world and synthetic benchmarks left us feeling mixed about the V+100’s strengths, its power consumption was unambiguous in a very good way. 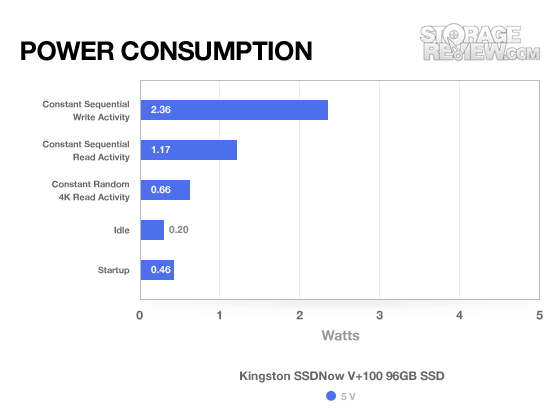 To say that the V+100 sips power is an understatement. Recording power draw that is consistently 50% to 80% below that seen on the last generation of this drive using the old controller, these numbers–especially, the nearly negligible draw at idle–are arguably the most impressive we’ve recorded for a device in this class.

Kingston offers the same fairly generous three-year warranty on every SSD they make–a point worth considering if you’re concerned about the impact that the V+100 data cleanup activities may have on drive lifespan. Kingston does offer the lowest MTBF of 1,000,000 hours of any modern SSD however. Not that we expect this to be a problem, but it is worth noting.

In the end, we put the somewhat awkwardly sized 96GB Kingston SSDNow V+100 up against some of the fastest SSDs we’ve tested. Given this, for a drive at this price point ($190 street), anything more than mediocre relative performance among such serious competition would have been a shocking result. Hence, while we’re not surprised that this particular drive didn’t blow us away, and we were decidedly disappointed on a few finer points of the V+100’s performance, Kingston’s latest mid-grade SSDNow certainly lives up to its middle-of-the-road billing. We do give Kingston credit though for offering an easy to use upgrade kit, perfect for those transitioning from a hard drive to an SSD for the first time and truly amazing numbers on power consumption.

If you’re looking for solid everyday performance with an easy upgrade path, the V+100 represents a decent value. For laptop users who can get past the drive’s extra heft, outstanding power consumption performance is a huge plus.