The Kingston SSDNow V+200 is Kingston’s latest entry in their business SSD category, designed to offer performance at a reasonable price to users within the enterprise environment. The V+200 features a SandForce processor and SATA 6Gb/s interface for the speed, and asynchronous NAND for the cost savings. The net result are drives that are reported to pump out up to 535 MB/s sequential reads and up to 480 MB/s writes.

The Kingston SSDNow V+200 is Kingston’s latest entry in their business SSD category, designed to offer performance at a reasonable price to users within the enterprise environment. The V+200 features a SandForce processor and SATA 6Gb/s interface for the speed, and asynchronous NAND for the cost savings. The net result are drives that are reported to pump out up to 535 MB/s sequential reads and up to 480 MB/s writes.

The V+200 represents an important offering for Kingston, as most major SSD brands that leverage SandForce processors offer a multi-headed portfolio of SSDs, each with a SandForce processor paired with a different type of NAND. Kingston checked off SandForce with synchronous NAND with their enthusiast class HyperX (Kingston HyperX SSD Review) and the business-class KC100 SSD. The V+200, as noted, uses asynchronous NAND which still gives the drive excellent speed in many areas, while reducing overall drive cost.

Kingston is offering the V+200 in several capacities including 60GB, 90GB, 120GB, 240GB and 480GB with street pricing of $105, $140, $175, $335 and $679 respectively. Kingston also offers all capacities in an upgrade bundle which includes an enclosure and software to clone an old drive to a new Kingston SSD. The kit normally adds roughly $15 to the drive cost, which is a worthwhile investment for anyone migrating drives. 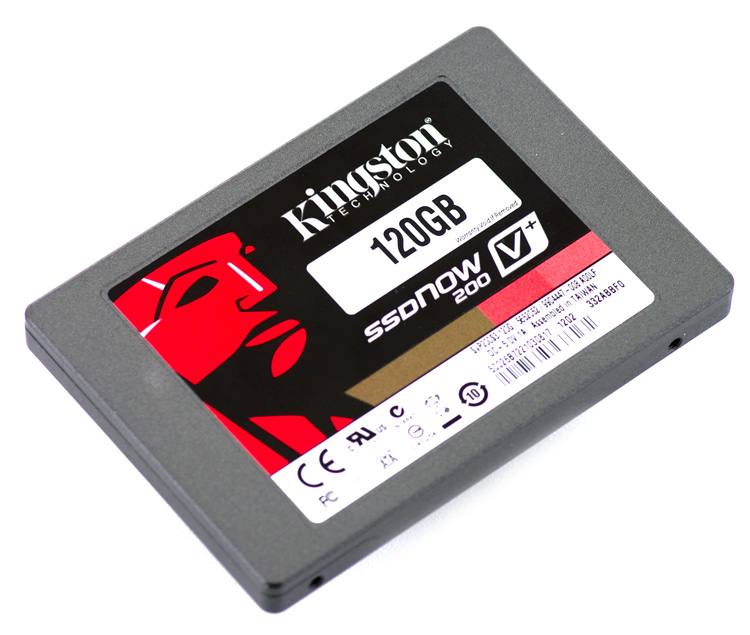 The Kingston SSDNow V+200 has a metal alloy case split between two halves connected with screws. The case has a bit of heft to it compared to other SSDs we have reviewed, with a very sturdy feel. The V+200 has a single drive sticker on the top, showing the drive information, including model, firmware revision, and serial number amongst other things.

The side profile of the SSD shows the seam where the top and bottom case segments meet and align for a precise fit in any 2.5-inch drive enclosure.

The front of the drive has a standard SATA data and power interface, with service pins next to it.

The SSDNow V+200 is simple to take apart, if you have a security Torx bit. While most other SSD manufacturers opt for using standard Phillips head or Torx screws, Kingston went a non-tamper route to further limit users from opening the drive. Considering there is a warranty void if removed sticker on the back and no user-serviceable parts inside, there is really no reason why anyone should need to open up the case during the use of this SSD.

Inside we see that Kingston continues the tradition of using thermal pads above and below the circuit board to draw heat away from components such as the SandForce SF-2200 controller and Intel NAND. This is rather unique, as few SSD manufacturers go this route for drives that are designed for PC/workstation use. Good thermals are important though, especially if an SSD is going to be pressed hard, so while a seemingly small design feature, for heavy use this is a critical addition. 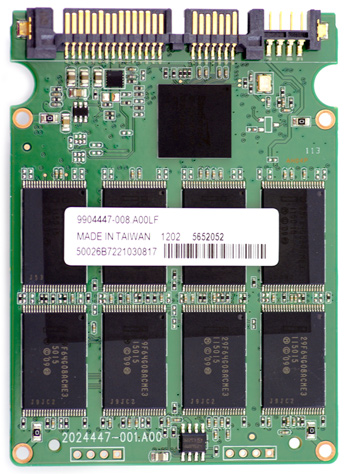 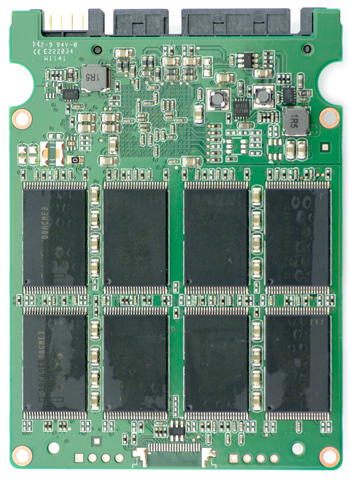 The Kingston SSDNow V+200 is powered by a SandForce SF-2281 processor, connected to sixteen 8GB Intel Asynchronous NAND pieces. They are divided evenly on both sides of the circuit board, with eight on top and eight on the bottom.

For the 120GB SSDNow V+200 capacity, Kingston lists a peak read speed of 535MB/s and a write speed of 480MB/s. To put these claims to the test, we used our 2MB sequential transfer test in IOMeter.

At a low queue depth the Kingston SSDNow V+200 ranked toward the top of the pack in 4K read speed, and topped the chart with its high 4K write speed with incompressible data. 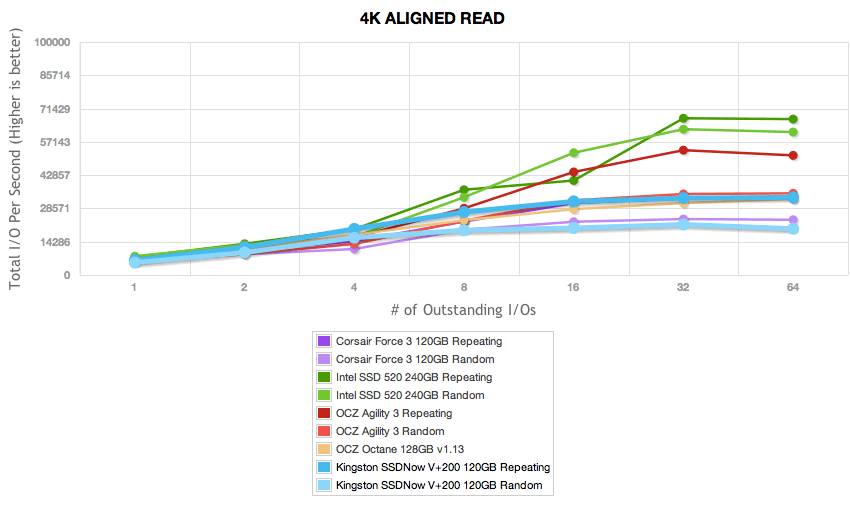 At higher queue depths the Kingston SSDNow V+200 fell back compared to higher capacity models topping at 33,300 IOPS read with compressible data. This slowed to 19,800 IOPS with randomized data. 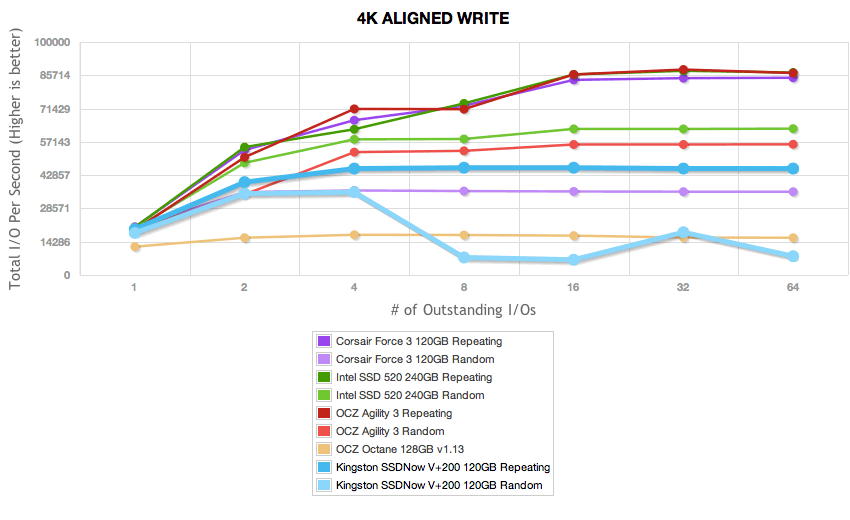 In our 4K write latency test, which measures access times at a queue depth of 1, the Kingston SSDNow V+200 scored very well with average response times of 0.0463ms with incompressible data and 0.0471ms with compressible data. Peak latency times were also excellent, measuring 43.25ms and 41.04ms for repeating and randomized respectively. 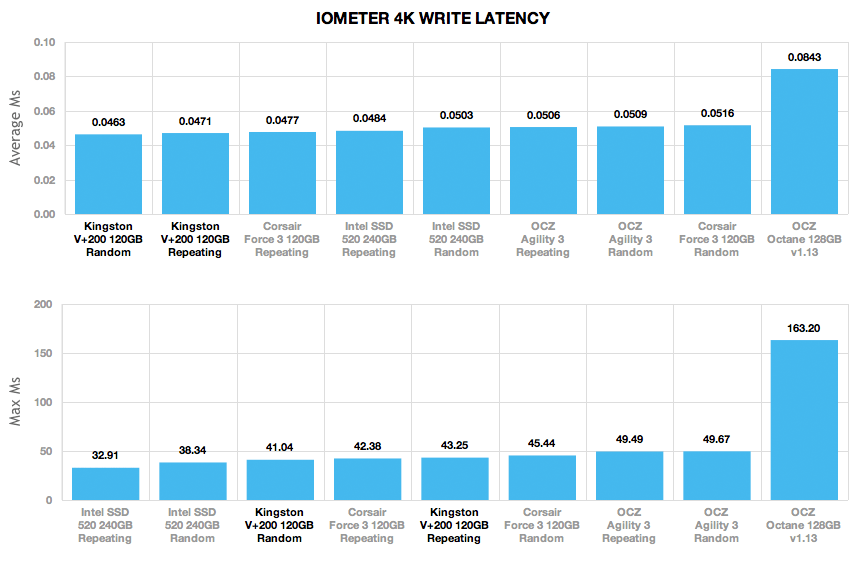 Using CrystalDiskMark with randomized data, we noted similar read and write speeds as what we found with our incompressible IOMeter testing, although CDM did give slightly higher read speed figures. 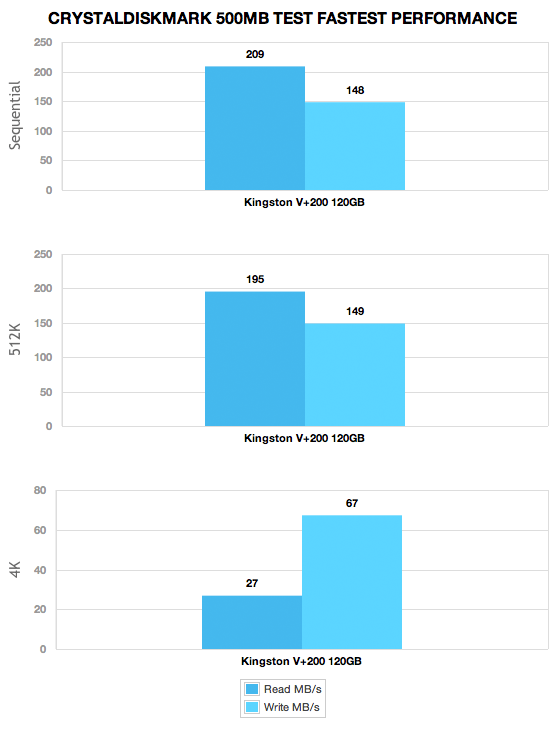 Our last group of consumer IOMeter synthetic benchmarks looks at mixed-load server profiles including Database, Workstation, File Server, and Webserver. In this group of tests the Kingston V+200 stayed towards the bottom of the pack, showing stronger performance with low-queue depth speed. 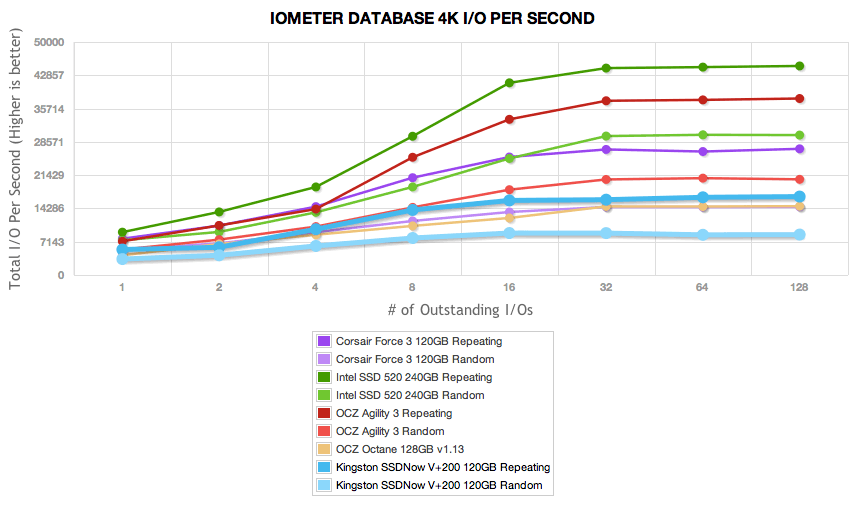 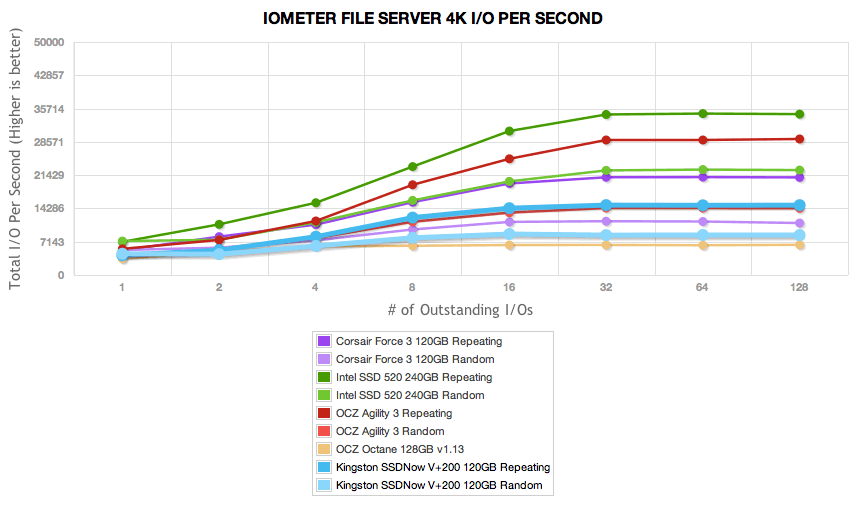 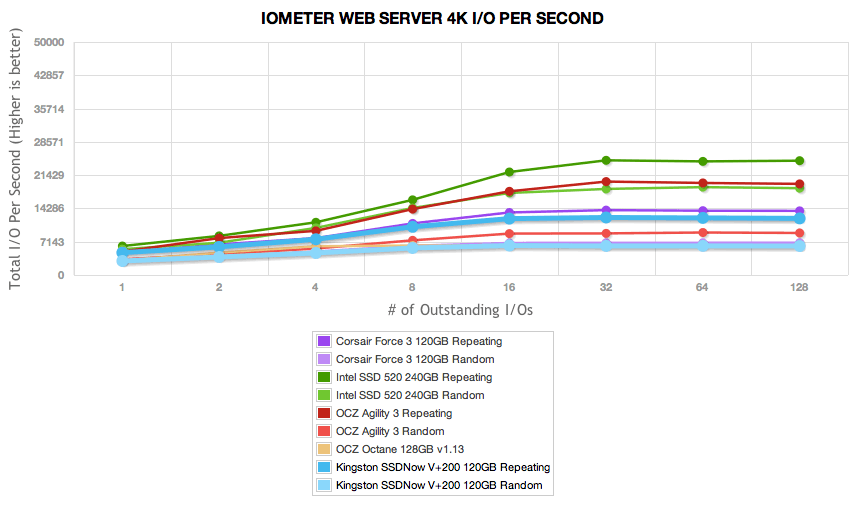 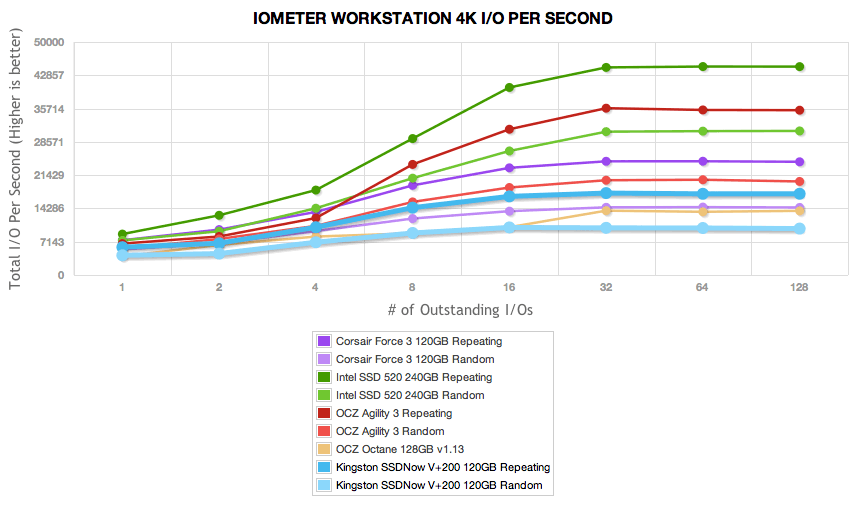 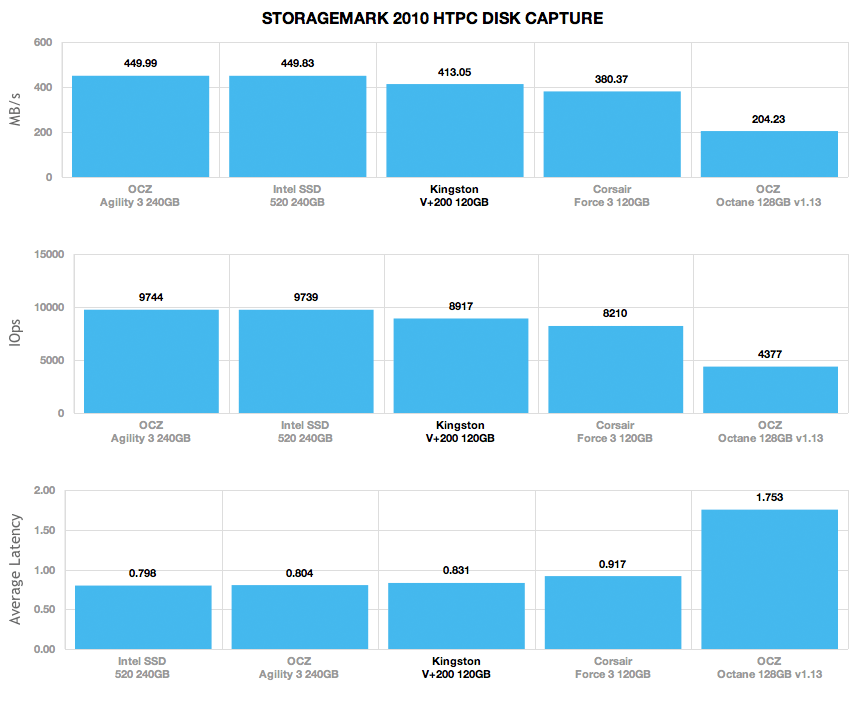 The Kingston SSDNow V+200 scored very well in our HTPC trace, coming in ahead of the Corsair Force 3 of the same capacity and configuration with a speed of 413MB/s and 8,917 IOPS average. 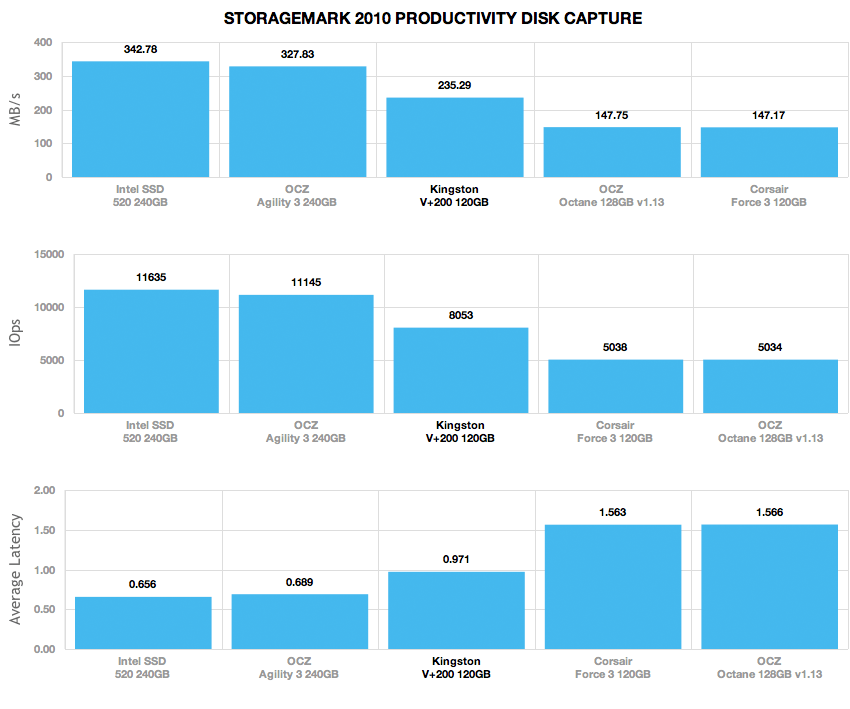 In our productivity trace the V+200 scored very well again compared to the 120GB Force 3, measuring 235MB/s average compared to 147MB/s of the Force 3. 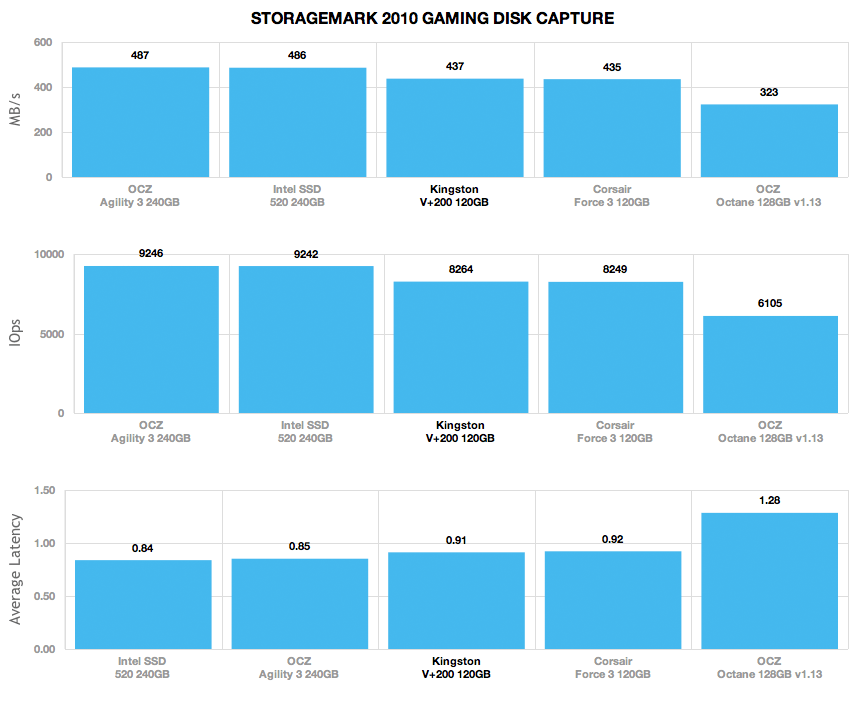 In our read-intensive Gaming scenario the Kingston V+200 and Corsair Force 3 both scored roughly the same speed, coming in at 437 and 435MB/s respectively.

The Kingston SSDNow V+200 fills an important gap in their SSD portfolio. While targeted toward end users within the enterprise, the V+200 will find itself widely adopted by consumers as well. Kingston has an offering targeted toward mainstream consumers in the SSDNow V200, but it’s performance is middling and it’s at price parity with the generally more robust V+200. Kingston of course is expecting traction with end users as well though since they offer an easy upgrade kit as an option for $15, something that appeals more to the client user than enterprise.

Regardless of the target, the V+200 holds up exactly as we’d expect for a SandForce enabled drive with asynchronous NAND. It’s in-line with the competitors, only falling down in some areas due to the 120GB NAND configuration. We were pleased with its performance, although in some business or enterprise-targeted benchmarks it did slip behind compared to similar drives. For end users though, the SSDNow V+200 packs a punch with strong low queue-depth performance with above average consideration for thermal dissipation under heavy workloads.

For buyers looking for a mainstream SSD with good performance and value, the Kingston V+200 is a solid option with extra attention paid to thermals. Upgraders should definitely take advantage of the upgrade kit, a tremendous value with only a $15 premium.