The Lenovo ThinkStation P920 Workstation Tower is a beast and is highly configurable to put up big numbers and make quick work of many different types of workloads. With up to three NVIDIA Quadro GV100s, you have the most powerful GPUs NVIDIA makes for workloads that require extremely fast HBM2 memory; or if your workload just needs a ton of GPU memory, you can get two NVIDIA Quadro RTX 8000’s for a total of 96GBs of video memory over the included NVLink. If your workload is more CPU bound, Lenovo has you covered there as well, with support of up to two Xeon Platinum 8280’s, for 56-cores and 112-threads at 4.0GHz.

The Lenovo ThinkStation P920 Workstation Tower is a beast and is highly configurable to put up big numbers and make quick work of many different types of workloads. With up to three NVIDIA Quadro GV100s, you have the most powerful GPUs NVIDIA makes for workloads that require extremely fast HBM2 memory; or if your workload just needs a ton of GPU memory, you can get two NVIDIA Quadro RTX 8000’s for a total of 96GBs of video memory over the included NVLink. If your workload is more CPU bound, Lenovo has you covered there as well, with support of up to two Xeon Platinum 8280’s, for 56-cores and 112-threads at 4.0GHz. 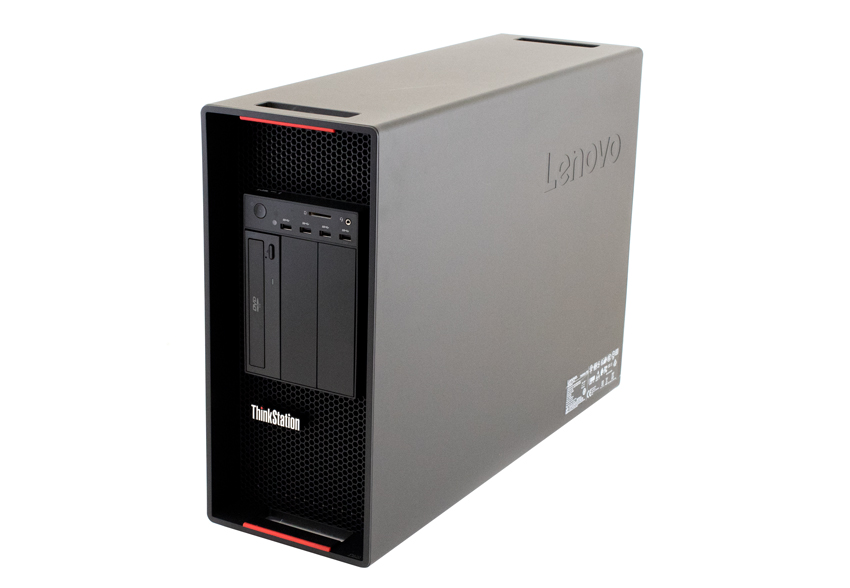 Use cases for this workstation range from architectural design, to CAD, to Hollywood-level VFX, or just editing high-resolution footage in 8K. Whatever your personal use case, these are available in made-to-order configurations. The base configuration starts at $2,354.22 (as of August 2020, normal MSRP is $4,059 but goes on sale frequently), but you can easily check all the boxes and skyrocket past $50,000 if you really wanted to; and let’s be honest, who doesn’t love messing with the online configurator to see how high you can go?

In this review, we’ll be focusing on the media and content creation aspects of this machine, checking out Blender renders, Davinci Resolve performance with 8k RED footage, V-Ray, and others that are hopefully relevant to your work. This is a follow up review with this system, our first review of the P920 can be found here.

Also, check out this handy PDF with the full configurable spec for the P920 as of June 2020 (it’s a lot; we weren’t lying about how configurable it is).

The Lenovo ThinkStation P920 is a tower form-factor workstation and it’s built like a tank. Made mostly of steel, it also weighs as much as a tank, too, with the heaviest configuration coming in at over 80lbs (>37kg). It is decidedly a Lenovo machine, with the tell-tale black with red highlights around the case. It’s understated and won’t make too much of a fuss at your workstation, other than its massive size.

The rear of the workstation is mostly ventilation (which it definitely needs) and an adequate amount of I/O. It also hints at the performance this machine can put out where the two Quadro RTX 8000s are visible. Also visible are its 8 PCIe slots and a punch-out where the optional serial port would go. 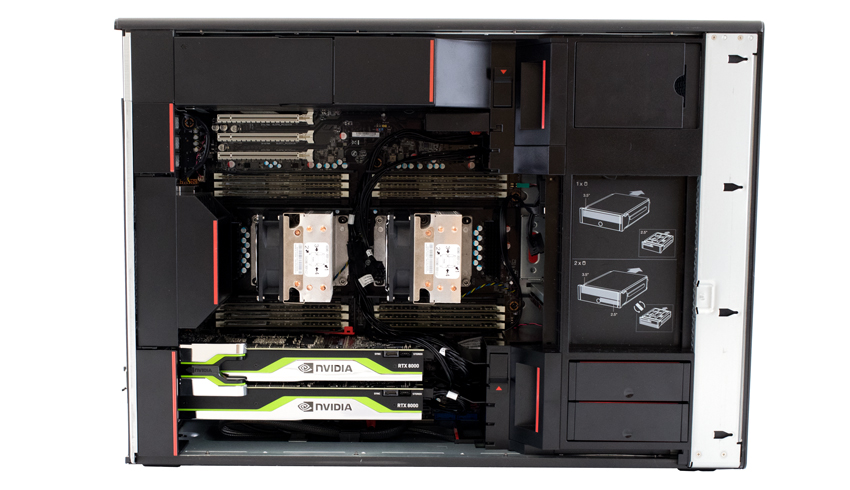 The inside of the machine is well laid out, with easy access to the PCIe slots and DIMM slots for future upgrades and expansion. Also, easily accessible is the front FlexBays and space for different configurations of storage drives. The whole thing is incredibly modular and almost everything that is user-serviceable or IT serviceable is toolless, including the entire PSU and the case fans.

Speaking of fans, in our extensive testing, this machine remained dead quiet. Even under full load, the GPU fans barely sped up while maintaining full performance. Granted, you could probably heat a single-family home while the two processors and two GPUs are being stressed, but that’s really only under artificial stress tests or rendering, not typical of normal work. Speaking of work, let’s get to the good stuff!

The configuration we’re testing here is nearly top of the line but geared much more towards GPU heavy workloads, specifically CUDA accelerated tasks that demand high amounts of VRAM, than towards CPU heavy workloads. Our system is running Windows 10 for Enterprise and is spec’d with two Xeon Gold 6234 (8c/16t) for a total of 16c/32t, 192GB of DDR4-2933, a 1TB NVMe SSD, and the pièce de résistance, two NVIDIA Quadro RTX 8000s for a total of 96GBs of VRAM. We’ve also thrown in a dual-port 10GbE card for testing purposes to eliminate data bottlenecks. Spoiler alert, it was still not enough for this monster. We’ll be comparing it to a wide variety of machines, but particularly to a system with a Ryzen 9 3900X and an NVIDIA GTX 980Ti, and the same system but with a single Quadro RTX 8000.

Let’s start with the one thing this workstation isn’t spec’d for, which is CPU performance. We ran Cinebench R20 and got a respectable 7169 on the multi-threaded test. For reference, a consumer AMD Ryzen 9 3900X (12c/24t) scored 7247, which makes sense considering that although the Ryzen has 8 fewer threads, it has a ~1.1GHz advantage in clock speed, not factoring IPC and 7nm vs 14nm and all that (it’s really an apples to oranges comparison, we’re oversimplifying for brevity). 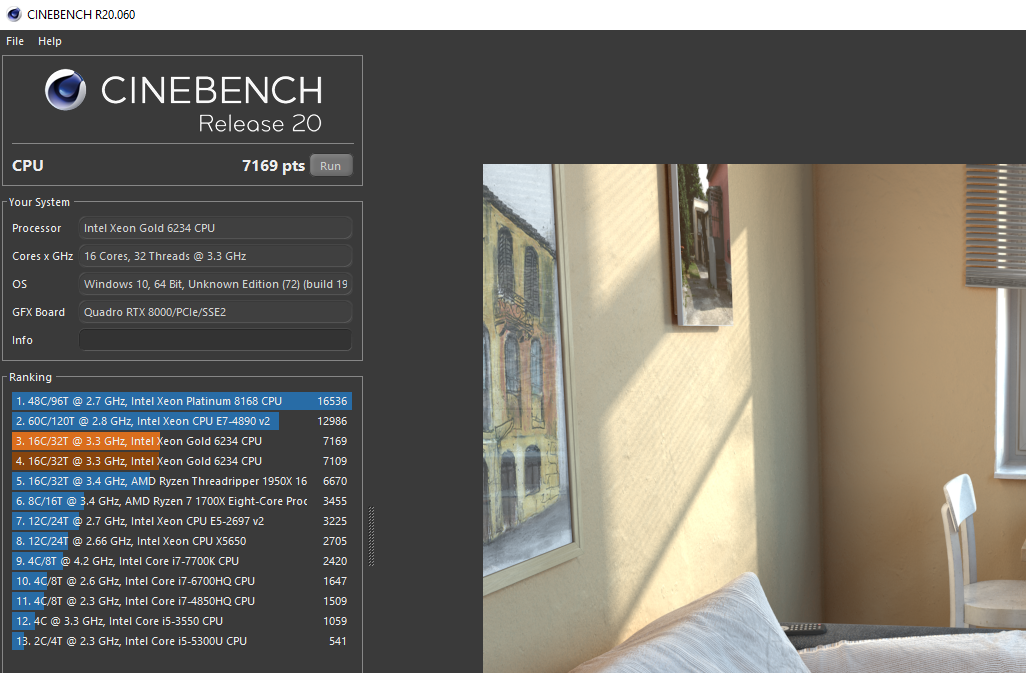 This is obviously not a great comparison, but it is a decent frame of reference for CPU performance. Again, not what this particular configuration is optimized for; higher core counts and faster clocks will greatly improve CPU score and are available as an option.

Now with that out of the way, let’s get to the good stuff! Next, we ran LuxMark 3.1 which is an OpenCL benchmark for GPUs. Unsurprisingly, the P920 performed well here. The dual GPUs really pulled their weight and more than doubled the score of the single RTX 8000 in the Ryzen system, the additional VRAM also being a contributing factor.

The next benchmark is SPECviewperf 13, the worldwide standard for measuring graphics performance based on professional applications. SPECviewperf 13 runs 9 benchmarks it calls viewsets, all of which represent graphics content and behavior from actual applications. These viewsets include CATIA, Creo, Energy, Maya, Medical, Showcase, Siemens NX, and Solidworks. We’re comparing it against the ThinkPad P72 and the previous review of the P920 workstation. You can find more information on that test setup here.

* This seems like an anomaly, especially compared to the other scores. The Siemens NX test of SPECworkstation, although not listed here, was more in line with expectations.

As expected, the dual GPU setup of the current P920 made quick work of SPECviewperf, especially compared to the single NVIDIA P6000 of the previous P920 review.

Here, the ThinkStation highlighted the difference of desktop versus mobile a bit more coming out way ahead of the P72. It also highlights, in GPU Compute, how much those dual RTX 8000s really pull their weight.

We’ll look at V-Ray from Chaos Group next. V-Ray is a 3D rendering plug-in that is widely used in architectural visualization, advertising, and visual effects for film and television. It’s available for many of the most common 3D modeling applications and like those 3D modeling applications, is very GPU dependent for performance.

Next, we’ll look at some Blender renders using the official Blender Open Data Benchmark tool. We’ll be benchmarking the BMW, Classroom, and Fishy Cat demo files using the OptiX back-end for the Cycles engine, which provides hardware-accelerated ray-tracing with NVIDIA RTX GPUs. This is new as of Blender 2.81 and is only applicable to RTX cards, so our 980Ti test is CUDA based. The tests on the P920 were done with the full Blender application since the benchmark tool doesn’t currently support multi-GPU setups; this doesn’t impact results. 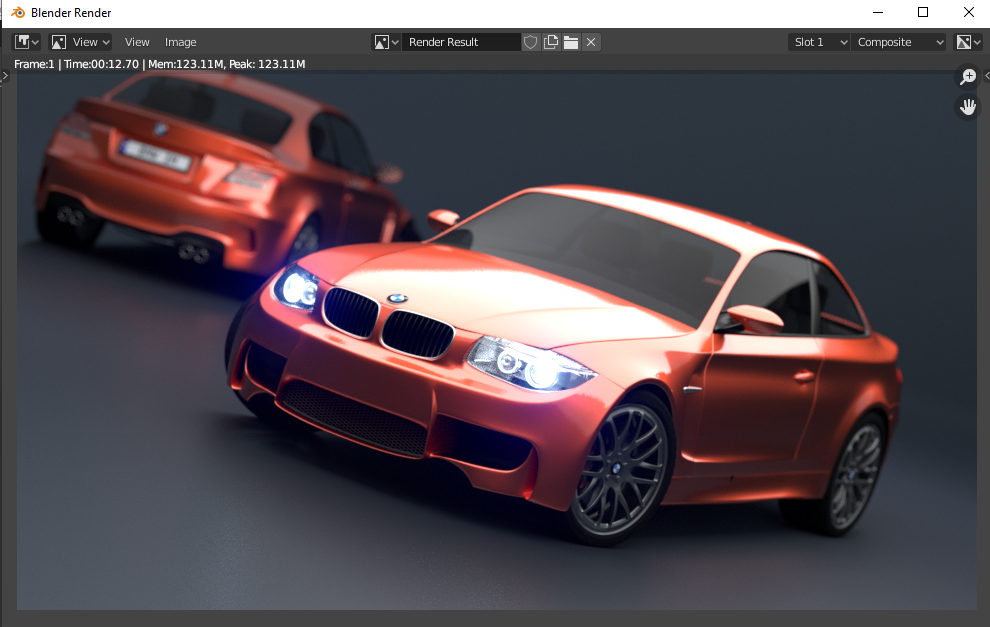 Aside from the OptiX back-end being way more efficient than CUDA, the Quadro RTX 8000 is great for Blender. The P920 does amazingly well here, as Blender scales pretty well with multiple GPUs and the 96GBs of VRAM will mean that even huge Blender projects can be rendered in a timely fashion. The link above has additional benchmark results from different GPUs to compare to. We opted to skip CPU tests this time since the test configuration is not optimized for CPU workloads. Also, worth noting that the Fishy Cat results are a little strange, as I don’t think that project is optimized for multi-GPU setups, hence the similar result as the single Quadro RTX 8000. Regardless, this machine is amazing for Blender.

Finally, we’ll look at some real-world use cases in Davinci Resolve. These results will be similar to results you can find in Adobe Premiere Pro and Adobe Media Encoder with the latest versions that support GPU-accelerated H.264 and H.265 rendering as well as excellent performance in GPU-accelerated effects. Davinci Resolve has most everything optimized for GPU acceleration and also natively supports multiple GPUs.

The methodology behind this test is seeing how straight renders perform and renders with GPU heavy effects perform. The straight renders simulate a scenario where you need to transcode a lot of footage for editorial or dailies, something I personally come across a lot in my daily work, especially when working with high-resolution footage or raw footage. The three sources of footage for this are 4.6k CinemaDNG RAW files from a Blackmagic URSA which can be found here (direct download), RED Gemini 5k Full Frame footage at 24fps, and RED Helium 8k Full Frame footage at 24fps, both of which can be found here. The effects we used are Watercolor, Emboss (Sobel), and Gaussian Blur. The files were being served over the network from a 2U FreeNAS server over 10GbE, but as you will see, even fully saturating the 10GbE network wasn’t fast enough for some of these clips. 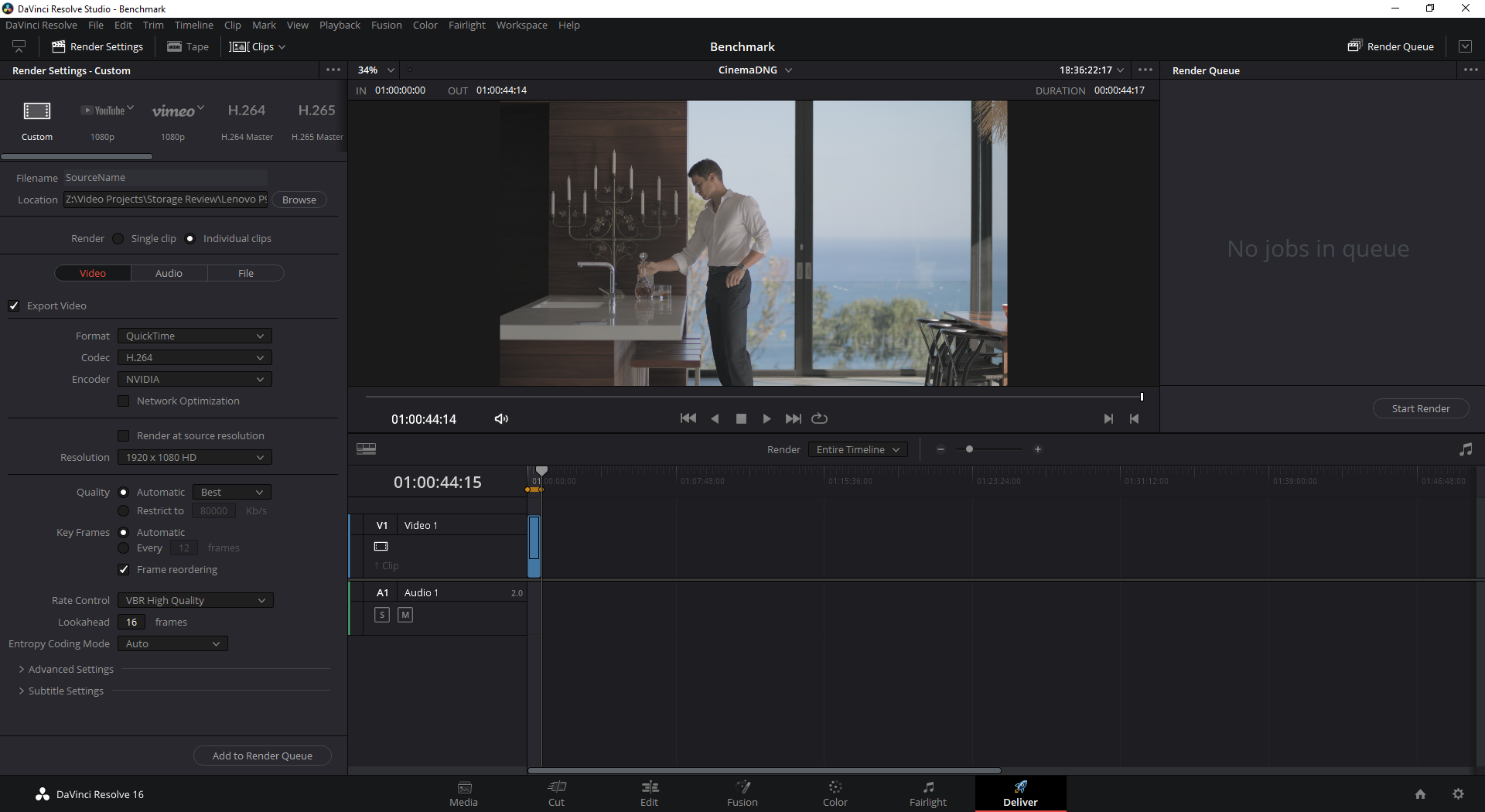 **Likely a storage bottleneck, even on 10GbE.

If you find yourself working with 8K RED footage often, the 96GBs of VRAM will be essential to keep a steady workflow and maintain reasonable playback speeds within Resolve. Even at 5K, there is an appreciable advantage to the dual GPUs in performance. The CinemaDNG results, while faster on the P920, will likely benefit more from faster storage. We were pulling over 900MB/s from the NAS during the heaviest tests resulting in the storage becoming the bottleneck and GPU usage only seeing about 48% in HWinfo64. Once we threw in FX, we started to really put the GPUs to work and can see the advantage of the dual GPU setup of the P920 and how efficiently Resolve can utilize them both.

The Lenovo ThinkStation P920 is truly a beast of a machine, but more so than that, it’s an excellent platform for many different applications and workflows. The highly configurable nature of this workstation allows for so many different possible specifications that can suit any needs. In addition, its modular build allows for easy upgrades and reconfiguring if the needs of your work change. Whether you’re a VFX artist, a CAD designer, or doing AI and machine learning or geological simulations, there is a configuration available for you. Lenovo offers the configuration we tested as an off the shelf solution, but they’re also available built-to-order to meet your specific needs.