The Sabrent ROCKET NVMe PCIe SSD is an end-user M.2 SSD that leverages the PCIe Gen3 x4 interface and 3D TLC NAND. Distinguished by the color of their branding, the black and blue Rocket is the mid-range line of Sabrent’s SSD portfolio. We also reviewed the high-end Sabrent Rocket PCIe 4.0 SSD back in July. Nonetheless, one of the more notable highlights of the Sabrent line is its generous range of capacities, which includes a 4TB model.  The drive also supports SMART and TRIM commands and features Advanced Wear Leveling, Bad Block Management, and Over-Provisioning.

The Sabrent ROCKET NVMe PCIe SSD is an end-user M.2 SSD that leverages the PCIe Gen3 x4 interface and 3D TLC NAND. Distinguished by the color of their branding, the black and blue Rocket is the mid-range line of Sabrent’s SSD portfolio. We also reviewed the high-end Sabrent Rocket PCIe 4.0 SSD back in July. Nonetheless, one of the more notable highlights of the Sabrent line is its generous range of capacities, which includes a 4TB model.  The drive also supports SMART and TRIM commands and features Advanced Wear Leveling, Bad Block Management, and Over-Provisioning. 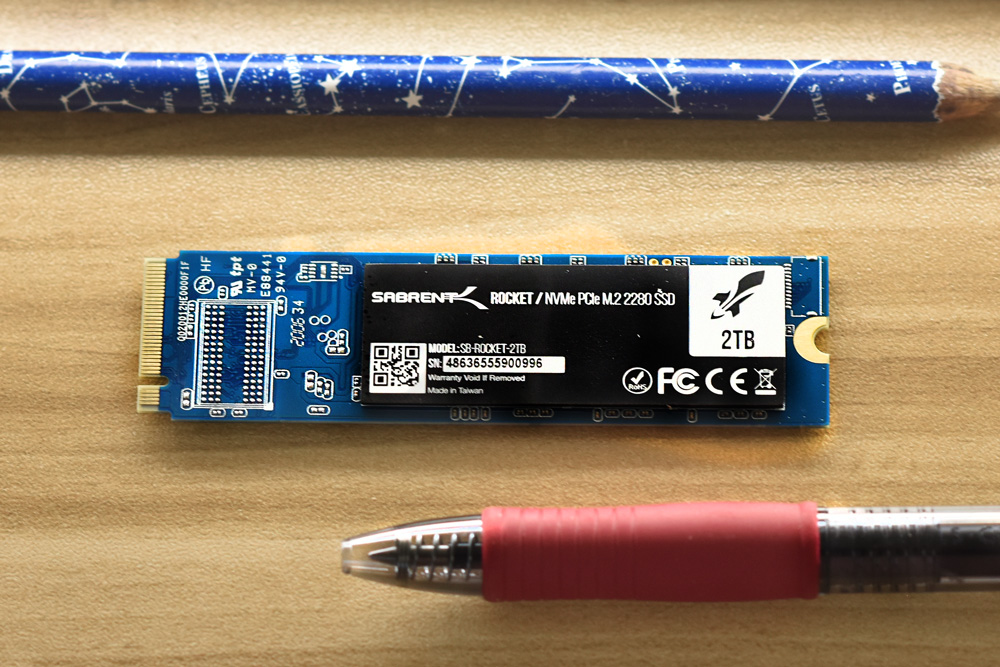 Like all consumer drives of this class, the Rocket targets users looking to upgrade their system to NVMe technology as well as those who simply need speedy supplemental storage to run their software or graphics-intensive games. Sabrent quotes the usual performance numbers we’ve come to expect with consumer NVMe SSDs, quoting up to 3,400 MB/s and 3,000MB/s in sequential reads and writes, while random performance is expected to hit up to 650,000 IOPS. The Sabrent Rocket also comes with some decent endurance numbers as well, including 1.8 million hours MTBF for all capacity models. 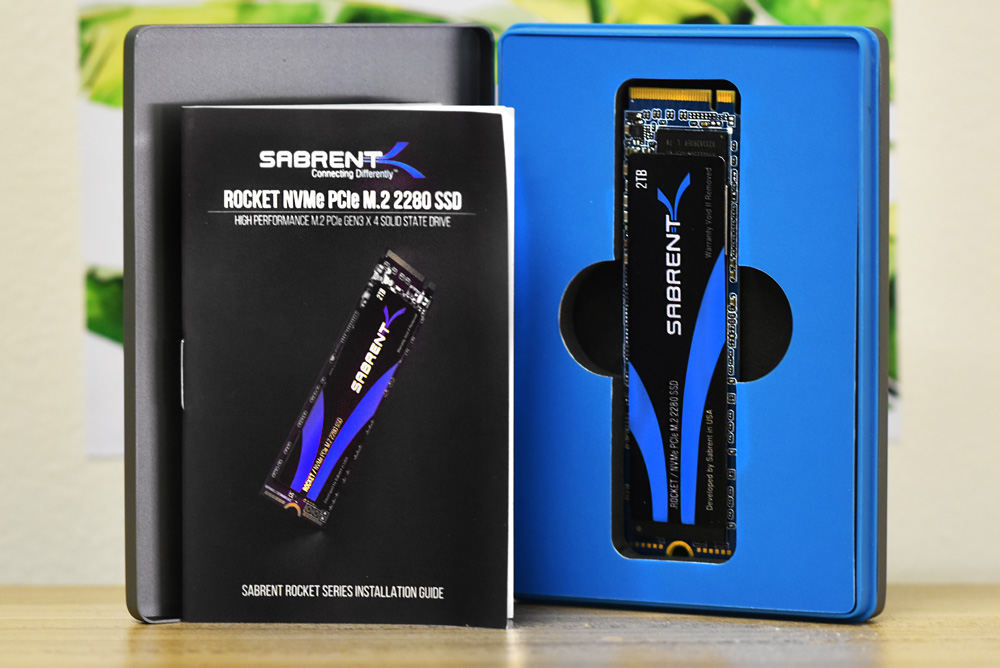 Our SSD reviews leverage a Lenovo ThinkSystem SR850 for application tests (Note: we had to use an adapter card instead of a front bay slot due to a compatibility issue) and a Dell PowerEdge R740xd for synthetic benchmarks. The ThinkSystem SR850 is a well-equipped quad-CPU platform, offering CPU power well in excess of what’s needed to stress high-performance local storage. Synthetic tests that don’t require a lot of CPU resources use the more traditional dual-processor server. In both cases, the intent is to showcase local storage in the best light possible that aligns with storage vendor maximum drive specs.

Here, we see the Sabrent Rocket with a score of 3,407.9 seconds, which placed it near the bottom of the leaderboard. 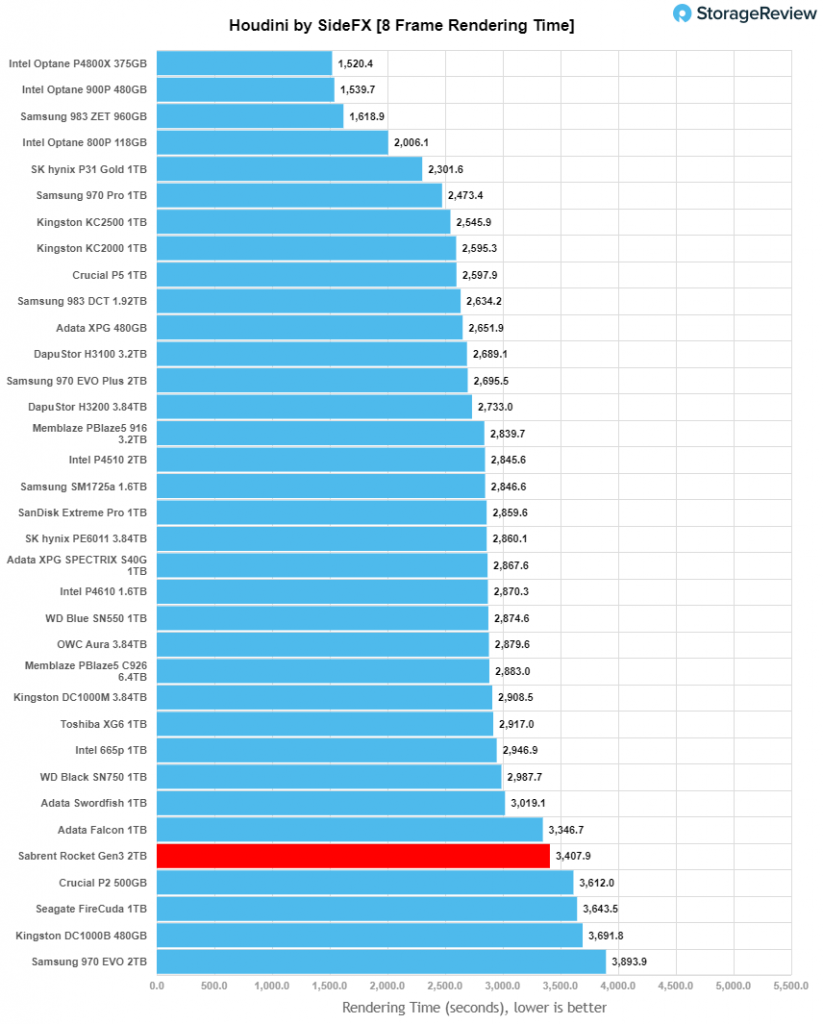 For our SQL Server transactional benchmark, the Sabrent Rocket posted a solid 3,161 TPS, which was only behind the pair of Samsung 970 EVO Plus drives for third place. 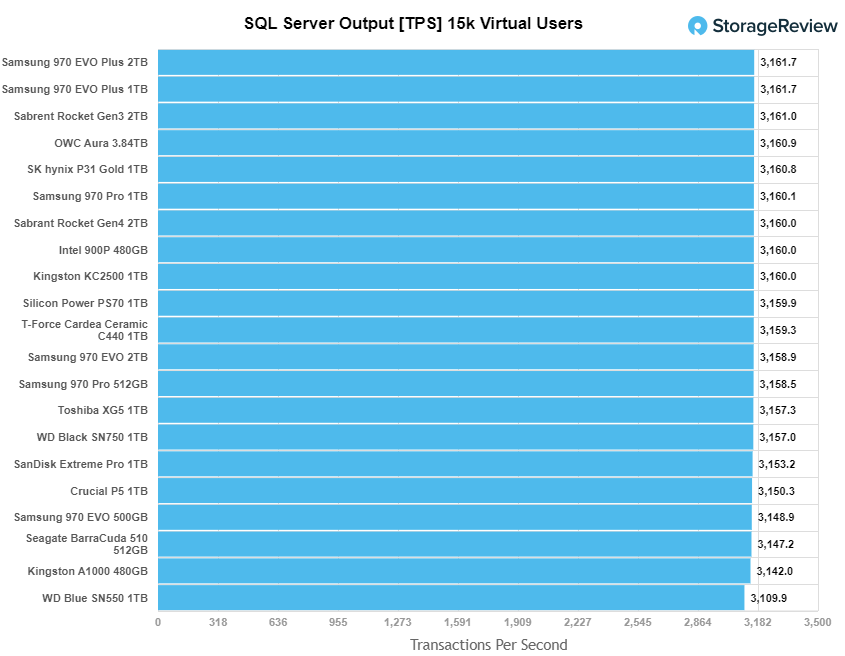 Moving on to latency, the Sabrent Rocket continued its great SQL performance with just 2ms in average latency, again only trailing the Samsung 970 EVO Plus drives. 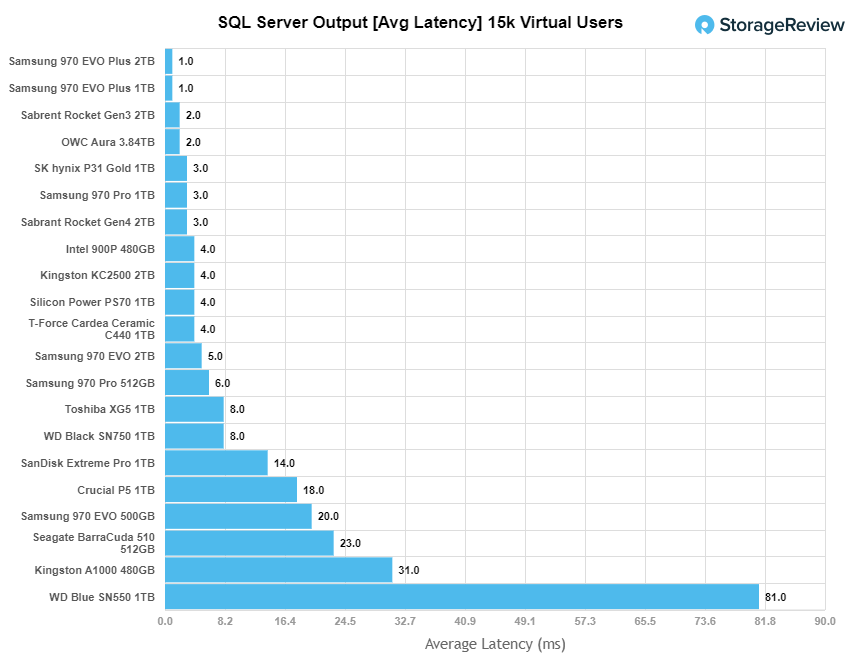 For random 4K read, the Sabrent Rocket showed middle-of-the-pack best-performing drive with a peak score of 407,107 IOPS at a latency of 313.3µs before a slight spike at the very end.

With random 4K write, the Rocket showed weak performance (placing second to last) with a peak score of 117,090 IOPS with a latency of 1091µs.

The Rocket performed much better when switching over to sequential read workloads, placing second in 64K read (just behind the SK Hynix Gold) with a peak performance of 3,8911 IOPS or 2.43GB/s at a latency of 410.9µs.

The Sabrent Rocket showed weaker write performance again in the sequential 64K test, peaking at just 11,250 IOPS (or 703MB/s) at a latency of 1,414ms. This placed it near the bottom of the leader board.

Next, we looked at our VDI benchmarks, which are designed to tax the drives even further. These tests include Boot, Initial Login, and Monday Login. Looking at the Boot test, the Sabrent Rocket PCIe Gen3 showed mid-range performance, peaking at 93,986 IOPS with a latency of 353.5µs before taking hit in performance at the end of the test.

VDI Initial Login, the Rocket showed some serious spikes in latency and IOPS throughout, peaking of 37,009 IOPS with a latency of 807µs before hitting a few last spikes.

Finally, VDI Monday Login saw the Rocket among the bottom performers with a peak score of 30,523 IOPS and a latency of 522µs before dropping off again

Overall, the Sabrent ROCKET M.2 form factor NVMe SSD is a viable, budget-friendly choice for those looking to upgrade their system. The Rocket is Sabrent’s mid-range model from the company’s consumer storage portfolio (the higher-end model is the Rocket Q4 NVMe PCIe 4.0) and is released to compete alongside other mid-range lines like the Samsung EVO Plus. Featuring 3D NAND and the PCIe Gen3 interface, it comes in a wide range of capacities from 250GB to 4TB, which gives users plenty of flexibility when deciding on the right drive for their needs. 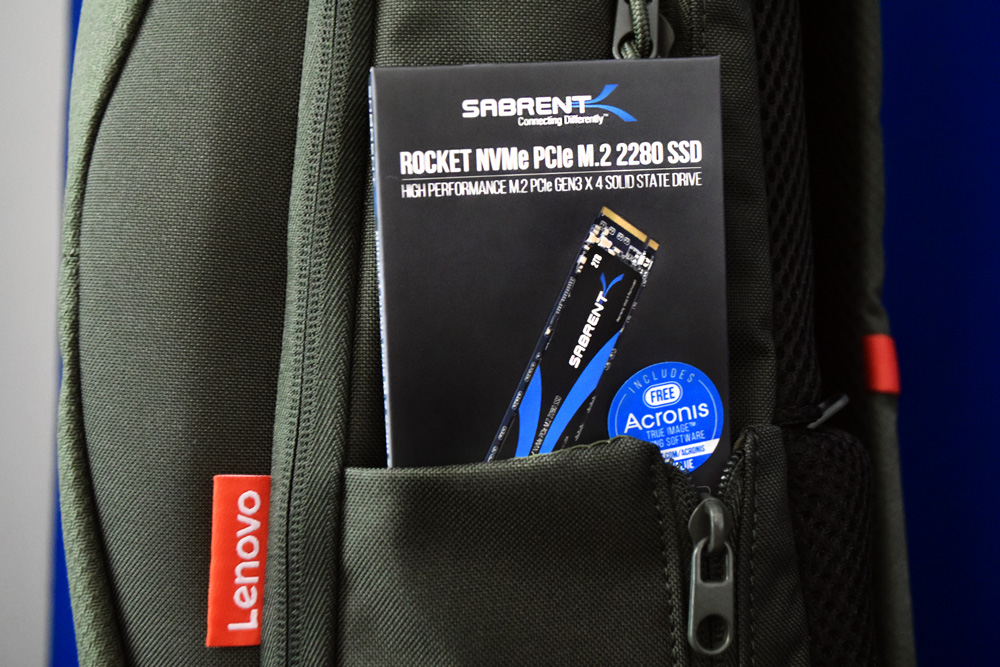 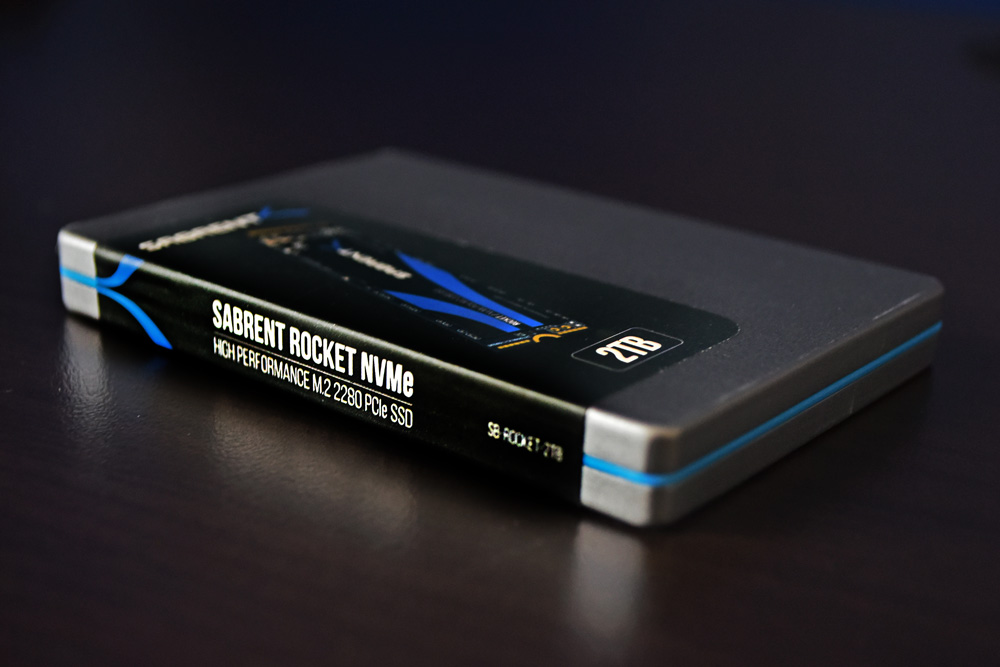 Though its performance was a bit disappointing in some areas, its price tag is certainly not. The 1TB and 2TB capacities currently go for $150 and $280, respectively, and if you’re just looking for a small capacity drive just for your operating system, it only costs 50 bucks for the 256GB model. In comparison, the Samsung EVO Plus retails around $190 (1TB) and $430 (2TB), while the Crucial P5 currently goes for roughly $180 (1TB) and $400 (2TB), both of which the Rocket outperformed in sequential reads (though as we mentioned above, it did fall behind in most other categories). That said, if you’re looking for an inexpensive NVMe drive, and you’re not too worried getting the best performance possible from a consumer drive, the Sabrent Rocket Gen3 PCIe NVMe SSD is definitely a solid option.