Late last month LSI released a new SAS/SATA 6.0Gbps RAID card; the MegaRAID 9265-8i. Built as an update to the MegaRAID 9260-8i, the 9265 brings a dual-core 800MHz processor and 512MB or 1GB DDR3 options all targeting faster speeds that the latest generation of SSDs demand. Today we give our first look on this new card and see how well it performs with four 250GB Intel SSD 510s in RAID0.

Late last month LSI released a new SAS/SATA 6.0Gbps RAID card; the MegaRAID 9265-8i. Built as an update to the MegaRAID 9260-8i, the 9265 brings a dual-core 800MHz processor and 512MB or 1GB DDR3 options all targeting faster speeds that the latest generation of SSDs demand. Today we give our first look on this new card and see how well it performs with four 250GB Intel SSD 510s in RAID0. 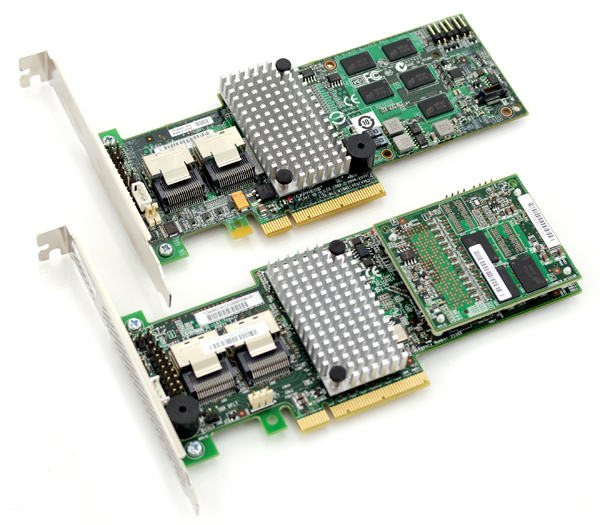 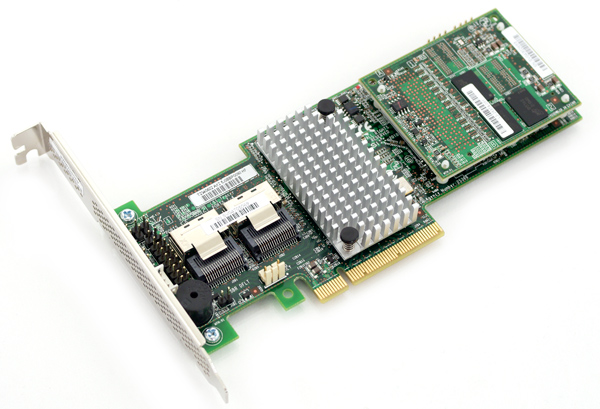 The LSI MegaRAID 9265-8i is designed for full and half-height slots, offering adapters for both sizes depending on the case you are installing it in. The board layout is very similar to the 9260-8i, although we did note the addition of a daughter board that contains the DDR3 cache. With this card being offered in both 512MB and 1GB sizes, it’s not surprising to see that they are interchangeable. 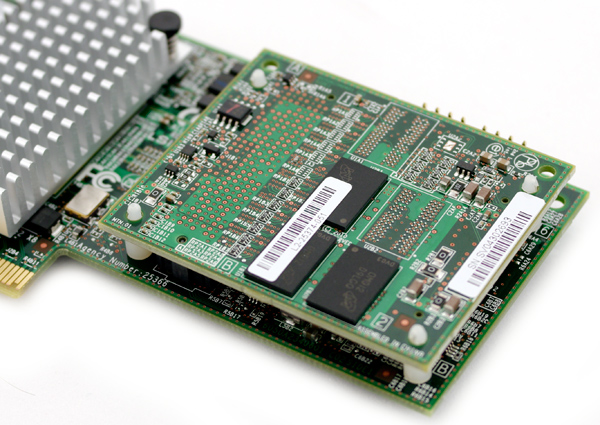 At the heart of the new 9265-8i is the LSI SAS2208 RAID-on-Chip dual-core 800MHz PowerPC processor. While the passive heatsink might suggest this chip doesn’t put off much heat, users should plan to at least have some amount of airflow through their chassis to keep the card happy. 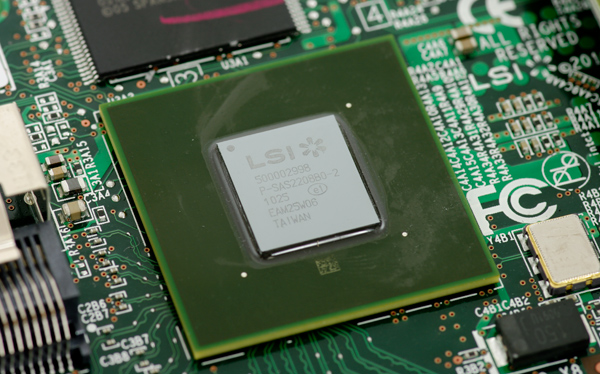 The enterprise and consumer storage space has been changing drastically over the past few years. The latest generation of SSDs have been pushing the IO boundaries of many interfaces, especially when it comes to random transfers. SSDs offer an order of magnitude greater speed compared to even the fastest platter drives, and they are showing no signs of slowing down. The newly released OCZ Vertex 3 is a great example, moving from previously saturating SATA II with the Vertex 2, to now nearly saturating SATA III with the current model. With speeds as high as 500MB/s and random 4K IOps upwards of 60,000, it’s no wonder why manufacturers are looking to beef up their previous generation controllers.

In this first look we compare the MegaRAID 9265-8i against the previous generation 9260-8i with the help of four 250GB Intel SSD 510s in RAID0. Both of these cards are kept on the same playing field, with FastPath enabled on both cards so one doesn’t have an unfair advantage. Note that this feature is an add-on for MegaRAID cards that is unlocked through software. The test configuration includes a RAID0 array spanning four SSDs with a stripe size of 128k, write back enabled, and drive cache enabled.

The first benchmark we turned to was IOMeter for its trusty 4K read and write profile. We expanded the test through queue depths 1 through 128, showing how each card handles higher workloads. The sample LBA size for this test was 5GB to move it outside of cache on both cards. 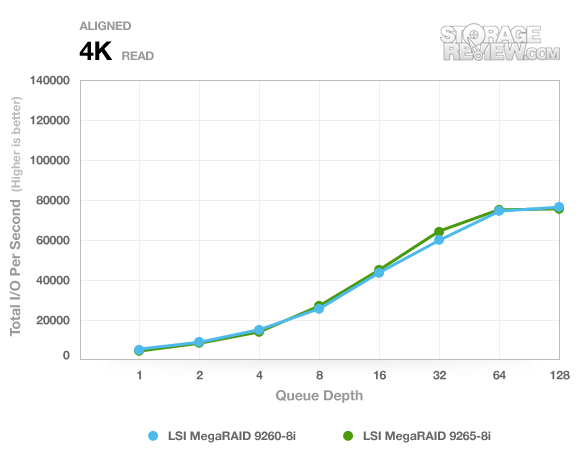 4K read speed with 4K-alignment was pretty much spot-on comparing each card. The MegaRAID 9265-8i had a small edge on the 9260-8i at a queue depth of 32, but both cards were at the same level as the workload increased. 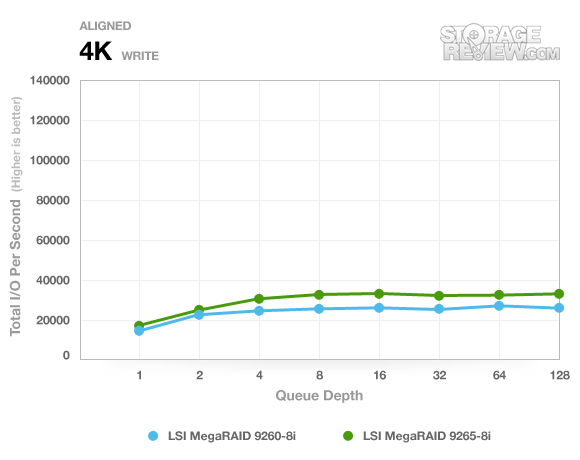 From our review of the 250GB Intel SSD 510, we found this particular drive wasn’t as peaky in 4K random write speeds, but it was surprising to see almost a 10k lead from the newer MEgaRAID 9265-8i. This lead came on early, leveling off around a queue depth of 4. With a faster drive like the OCZ Vertex 3 you would probably see the gap widen as demands increased.

Next we turned to our real-world benchmarks and were very surprised by the results. As you can see below, the 4K random write advantage didn’t play out as well in our mixed work-load traces. 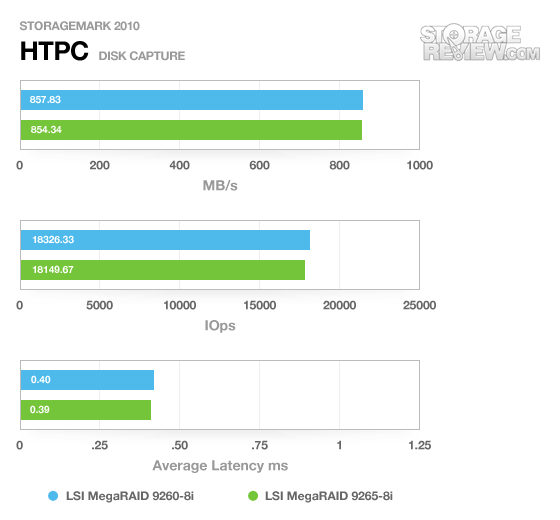 Both cards came in very close, although after averaging three sequential results the 9260-8i did have the edge on the 9265-8i. With a lead of roughly 3MB/s, it was able to squeak past its replacement. 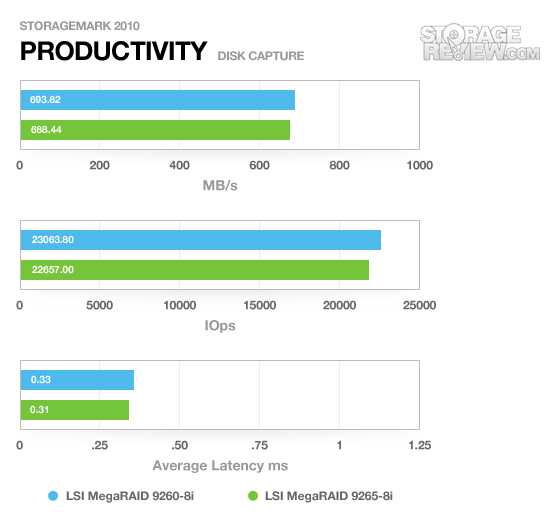 In our Productivity trace the gap actually increased between both cards, with the 9260-8i having yet again a very small lead. 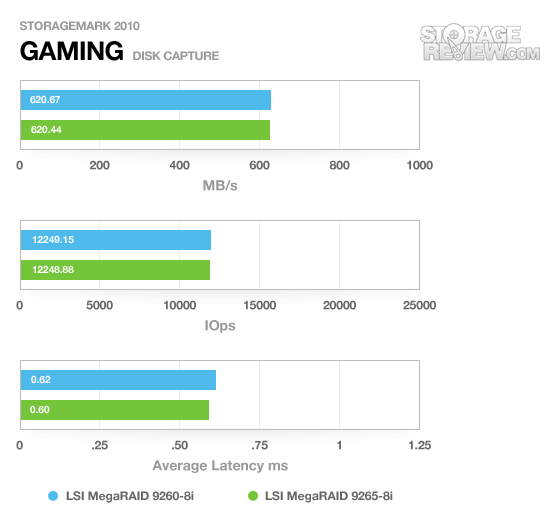 In the third and final trace both cards produced roughly the same score, although the 9260-8i did still have a small lead.

Over the following days we will be expanding on these tests, including more RAID scenarios and testing with a much larger pool of drives. Right now at a quick glance it looks like to really see a huge difference from the MegaRAID 9265-8i you really need to have a storage array fast enough to push its limits and show its strengths compared to the 9260-8i it’s replacing. Obviously it’s hard to make any solid claims from a sample of one type of drive in a select number of tests, but it does show both of these cards have a LOT of potential.