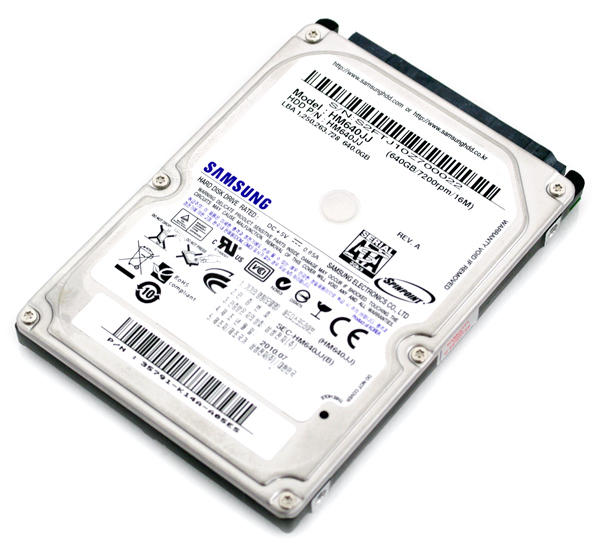 The HM640JJ’s two platters each hold 320GB. Interestingly enough, the HM640JJ does not use the new Advanced Format for hard drives with a 4kb sector size; it still uses the current 512-byte sector. Those still using Windows XP, which does not natively support Advanced Format drives, will appreciate this.
Aside from its capacity, the HM640JJ does not stand out in any particular way specification-wise.
Samsung Spinpoint MP4 (HM640JJ) Specs
Aesthetics
The HM640JJ looks and feels like a typical 2.5-inch, 9.5mm height drive. The label on top is standard and closely resembles the labels of other Samsung drives.

The inward-facing circuit board on the bottom is about the same size as used by competitors such as the Western Digital Scorpio Black 500GB. Notice the four pin jumpers on the right side – none are in use and their functionality is unknown. They may be useful for diagnostics or similar performed at the factory.
Disassembly
The HM640JJ is relatively easy to take apart; the circuit board comes free of the hard drive body with the removal of six screws. We found it amusing that none of the "warranty void" stickers break if the circuit board is removed. 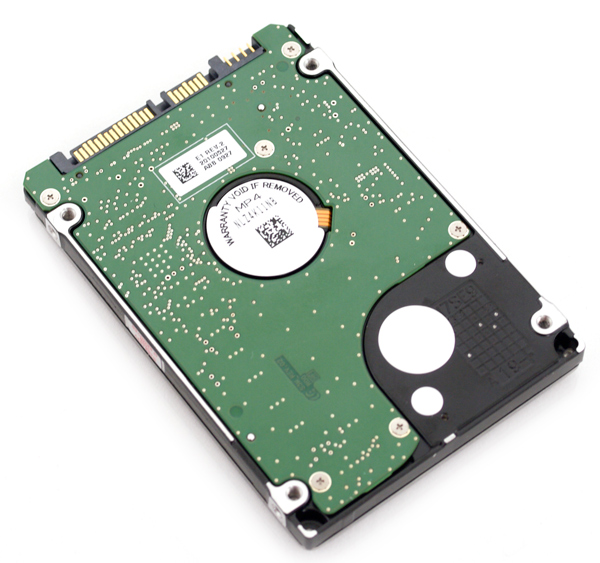 In between the circuit board and the hard drive body is a paper-thin flexible piece of electrical insulation. We have seen other drive makers use foam here instead as a vibration dampener. 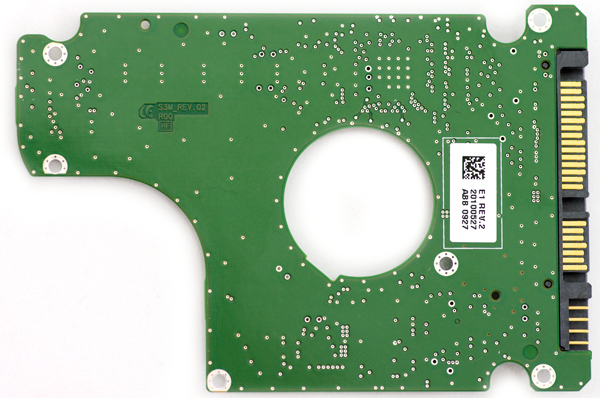 The HM640JJ, like many modern hard drives, comes with a circuit board that faces inwards; this way the metal body of the hard drive can act as a heatsink for it. This design also helps increase airflow on the outside of the drive, which is important in small places such as the inside of a notebook. 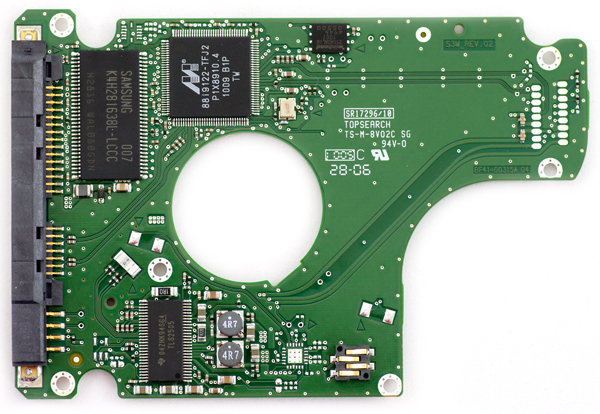 Synthetic Benchmarks
To see how the Samsung Spinpoint MP4 performs in its most optimal setting, we start off testing the driving with a 2MB sequential transfer using IOMeter. 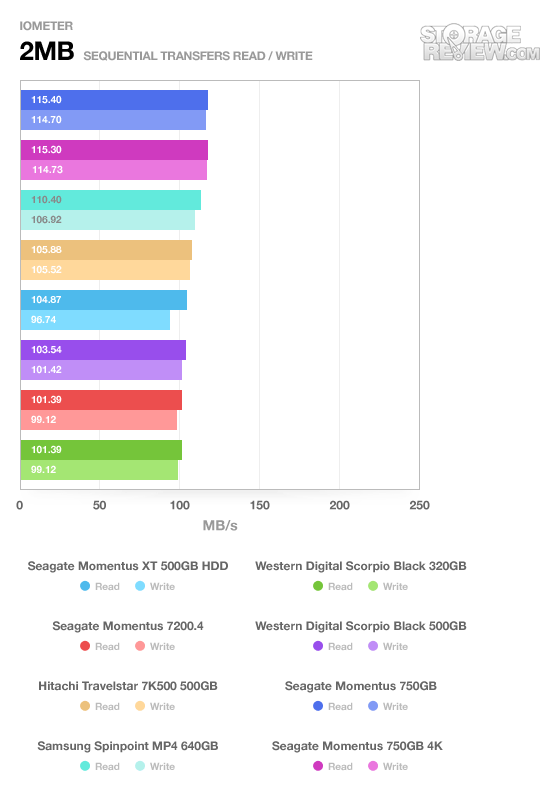 The HM640JJ’s high platter density pays off here, putting it above every 320GB and 500GB drive from competitors. It cannot touch the 750GB drives, however. These differences are minimal. 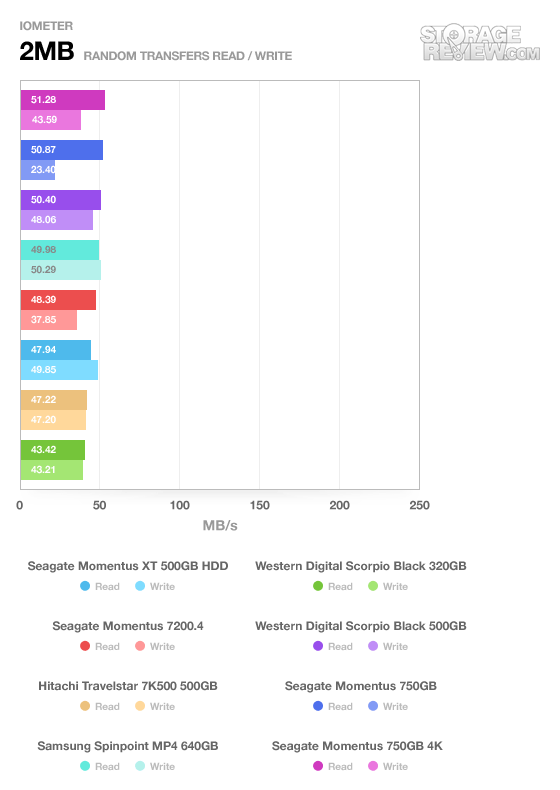 The HM640JJ makes a strong showing in the 2MB random transfer test, posting the best write numbers of the bunch. Even the Seagate Momentus XT is unable to match it. Again the Samsung’s numbers are nearly indistinguishable from the 500GB and 750GB competing drives. 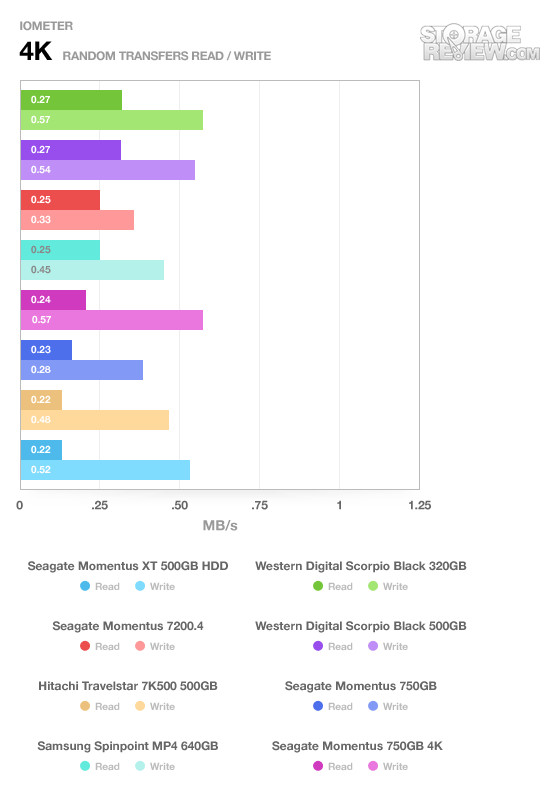 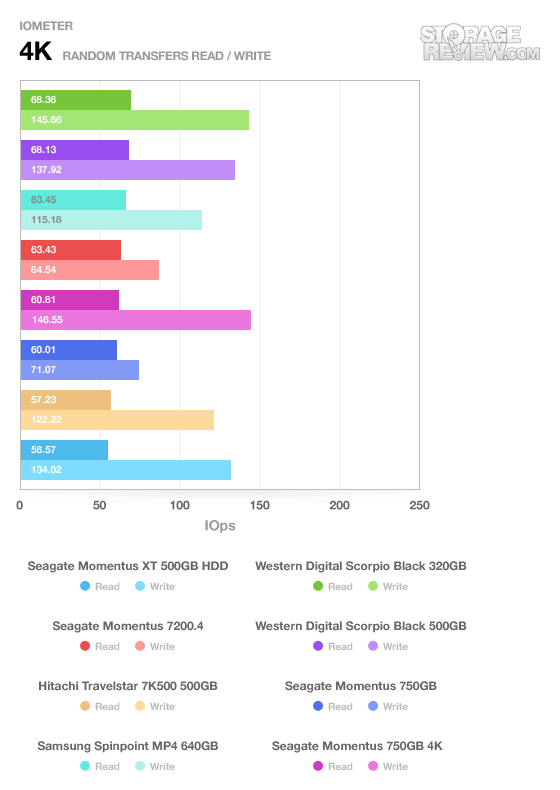 The Western Digital Scorpio Black drives, including the 320GB version, outclass the HM640JJ hands-down; the differences range from 7 to 20 percent. The Scorpio Black 320GB continues to be one of the best-performing notebook drives on the market. Nonetheless, the HM640JJ comes close to both drives and edges out or matches its Seagate and Hitachi competitors. So far, so good. 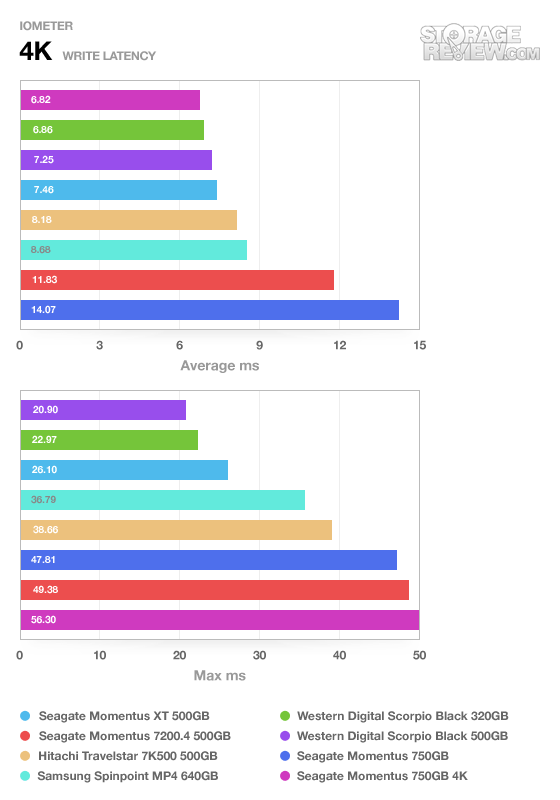 This is the first test where the Samsung is behind the majority of its competitors; its average latency trails behind the leading Seagate Momentus 750GB by 20%. This is nothing to get alarmed over, however; the HM640JJ certainly did not make a bad showing. 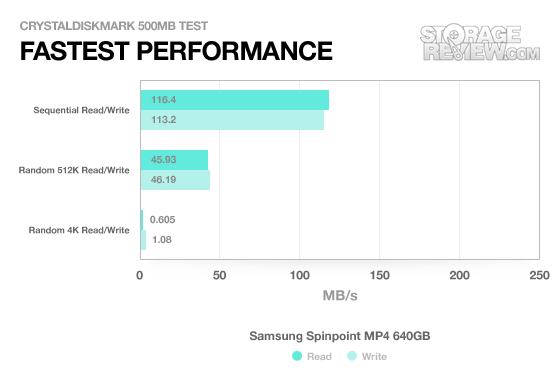 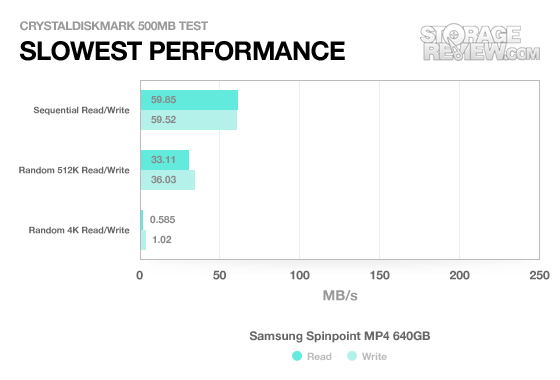 The HM640JJ performs admirably in CrystalDiskMark. The Fastest Performance test assesses the performance at the outside of the drive platters, which are spinning the fastest; the Slowest Performance is from the inside of the drive platters and indicates the worst data transfer performance. The HM640JJ’s numbers edge out the competing Western Digital Scorpio Black 500GB across the board.
Our server-style benchmarks place different demands on the drive than previous tests. These IOMeter benchmarks are different from other tests; they stress NCQ capabilities and use scaled loads ranging from a queue depth of 1 to 128. 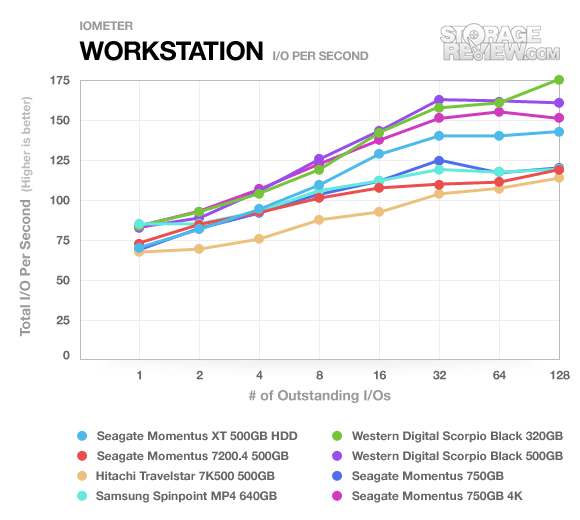 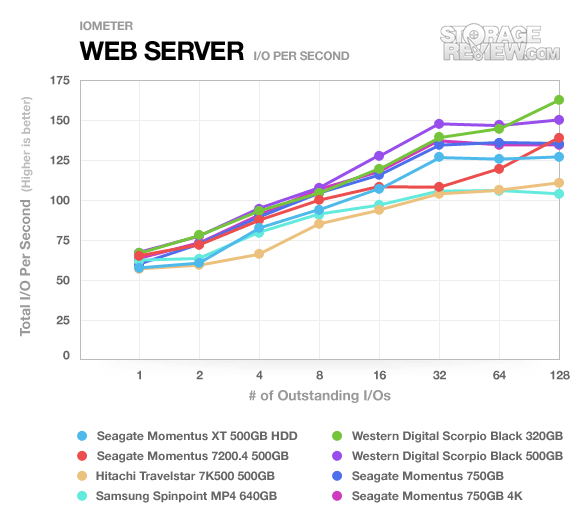 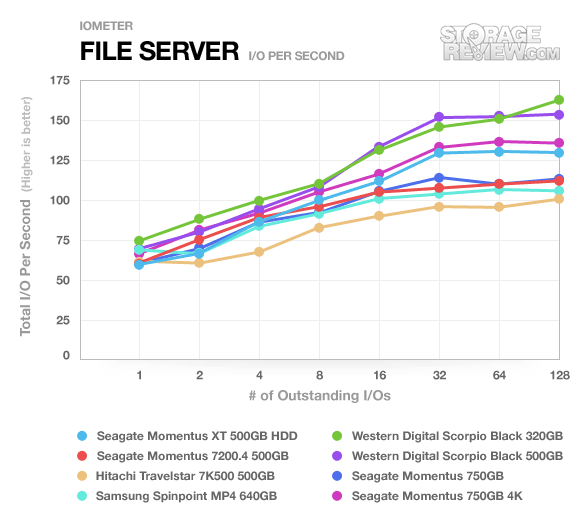 IOMeter is clearly not the HM640JJ’s forte; the drive struggles to keep its head above water. The only drive it was able to beat handily was the age-old Seagate Momentus 7200.4 500GB and occasionally the Hitachi 7K500. It doesn’t even come close to the Western Digital Scorpio Black drives.
That said, this is not the end of the world for the HM640JJ – let’s see how it performs in our real-world StorageMark 2010 benchmarks.
Real-World Benchmarks
StorageMark 2010 is our custom trace benchmark, designed to more accurately simulate the load a typical computer user would place on the drive. In this test we include: playing one 720P HD movie in Media Player Classic, one 480P SD movie playing in VLC, three movies downloading simultaneously through iTunes, and one 1080i HDTV stream being recorded through Windows Media Center over a 15 minute period. Higher IOps and MB/s rates with lower latency times are preferred. In this trace we recorded 2,986MB being written to the drive and 1,924MB being read.
The HM640JJ does very well here, ranking third out of all the drives behind the Seagates. No drive is able to touch the Momentus XT, which has some advantage given it has a built-in 4GB SSD smart cache. Our next real-life test covers disk activity in a gaming environment. Unlike the HTPC trace, this one relies heavily on the read performance of a drive. To give a simple breakdown of read/write percentages, the HTPC test is 64% write, 36% read, the Productivity test is 59% write and 41% read, while the gaming trace is 6% write and 94% read. The test consists of a Windows 7 Ultimate 64-bit system pre-configured with Steam, with Grand Theft Auto 4, Left 4 Dead 2, and Mass Effect 2 already downloaded and installed. The trace captures the heavy read activity of each game loading from the start, as well as textures as the game progresses. In this trace we recorded 426MB being written to the drive and 7,235MB being read.
Again the Seagate Momentus XT is untouchable, posting nearly double the scores of some drives. This test puts the HM640JJ smack in the middle. It is well behind the Western Digital Scorpio Black 500GB and comes within striking distance of the Seagate Momentus 750GB. Overall this test shows some weakness in the HM640JJ’s read performance. On the whole it is merely average.
Power Consumption
A common concern with 7200RPM drives is their power consumption and therefore their impact on battery life vs. a slower 5400RPM drive (and even other 7200RPM drives). 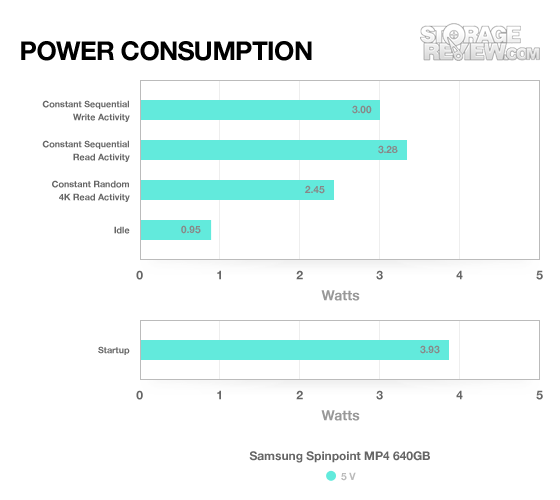 The HM640JJ is on the high side for power consumption amongst 7200RPM drives, drawing nearly one watt of power at idle. One of the lowest power consumption 2.5” drives currently on the market, the Hitachi TravelStar Z5K320, consumes 0.68W of power at idle or about 30% less. The HM640JJ’s read and write numbers are also higher though this is no surprise. None of the HM640JJ’s numbers are abnormal, though they are well above Samsung’s rated specifications (see the Specifications section at the top of this article). Compared to the drives that come in most notebooks, the HM640JJ will not practically affect battery life.
Warranty
The HM640JJ carries an industry-standard three-year limited warranty. Only Western Digital offers more than that: five years on its Scorpio Black series drives (the Blue series drives have three).
Conclusion
Samsung has a solid entry into the high-performance notebook hard drive market with the Spinpoint MP4. The HM640JJ version stayed competitive throughout our benchmarking process. Its main competitor, the Western Digital Scorpio Black 500GB, is a tad faster at random reads/writes and multitasking though the differences in real life are likely to be unnoticeable. Overall the HM640JJ produces consistently good performance and is well worth considering next to competing drives from Western Digital, Hitachi, and Seagate. Its large 640GB capacity is a big bonus (pun intended).
Pros:
Cons:
Bottom Line
Depending on the price, the HM640JJ might be your best bet for a high capacity, high performance notebook hard drive.
Product Page
Discuss This Review
0 comment
0
FacebookTwitterPinterestEmail