LSI’s line of MegaRAID RAID cards have tremendous market share for good reason, they’re looked at by many as the de facto standard thanks to solid hardware and a fantastic software stack. Of course LSI’s MegaRAID cards are capable of more than just tying together drives, their CacheCade Pro 2.0 add-on leverages the speed benefit of SSDs as cache pools for a larger capacity hard disk array.

LSI’s line of MegaRAID RAID cards have tremendous market share for good reason, they’re looked at by many as the de facto standard thanks to solid hardware and a fantastic software stack. Of course LSI’s MegaRAID cards are capable of more than just tying together drives, their CacheCade Pro 2.0 add-on leverages the speed benefit of SSDs as cache pools for a larger capacity hard disk array. 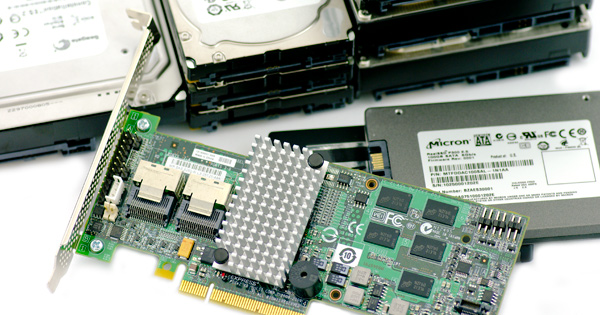 The concept of caching is simple – in this case LSI is using CacheCade to store frequently requested data on the SSD (or SSDs, up to 32 are supported). When hot data is requested, the SSD responds, delivering massive latency improvements in read and write-intensive applications. Web, file and data servers all stand to benefit a great deal from the increased read and write speeds of caching. CacheCade continues to operate in the background, using its algorithms to add or remove files from the SSD cache.

Perhaps the best part about CacheCade is its simplicity and low total cost of ownership. The software pack works with LSI’s 9260 and 9280 family of RAID cards and may be purchased on LSI’s website for $270. The TCO value is huge since an entire array of fast SSDs is no longer needed to get low latency access to data. Caching lowers costs by allowing users to size a data store with cheaper disks and only add as many SSDs as are necessary to handle the hot data. It also allows the caching array to grow as needed, supporting the addition of SSDs as hot data expands without impacting the rest of your array.

To show the improvements across multiple scenarios, we built three unique caching platforms to mimic an enthusiast, workstation, and enterprise disk environment. All three platforms were tested through our Lenovo RD240 ThinkServer testing platform with a SAS/SATA 6.0Gb/s LSI MegaRAID 9260-8i as the RAID and caching interface. The following configurations were used for each scenario:

In each scenario we are leveraging the capacity of the hard drive array with a 100-240GB SSD for caching. In the case of the Enthusiast setup, it would take over 16 240GB SSDs to match the total storage capacity offered by low-power 5,400RPM hard drives. With a street price of around $450 that array would cost over $7,000. Using LSI’s CacheCade Pro 2.0 software (assuming you already own the RAID card) it only costs $400 for the hard drives, plus $270 for CacheCade Pro 2.0, and $450 for a single SSD. Roughly $7,200 versus $1,120 for very similar performance across t

One of the main points to understand with each setup is we understand different users will have different needs in regards to storage space requirements and size of hot data for caching. In each situation though, the cost savings is nothing short of amazing.

Our method of testing LSI’s CacheCade Pro 2.0 software involved benchmarking each group of drives without caching enabled and then re-benchmarking each set with a 25GB hot-data zone and SSD caching at full speed. What these figures show is the performance of the "cold" data speeds versus the "hot" data speeds. Another way of looking at it is seeing just how fast caching is or how cached speeds are only limited by how fast your SSD caching array is.

We felt that the best way to show CacheCade in action was move away from our straight synthetic benchmarks (2MB sequential/random, 4K random) and use just mixed workloads to show how well caching can help in a given scenario. 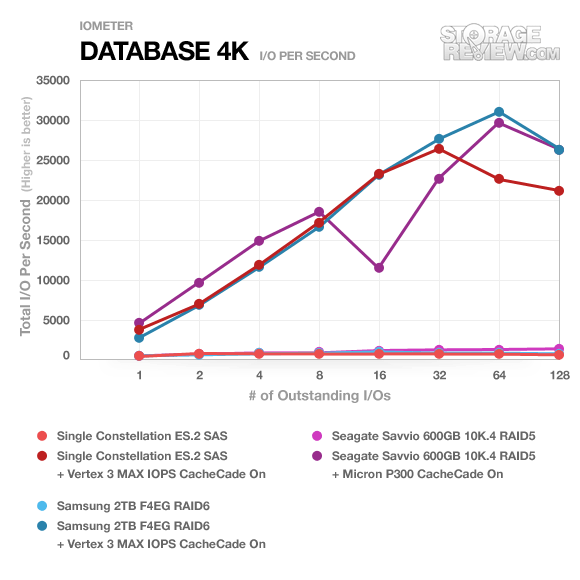 Looking at the performance of each of the three arrays, its hard not to see the drastic pickup in speed. Cached performance is not held back by the caching platform, but instead is the true speed of the SSD you are using. The difference is nothing short of amazing. 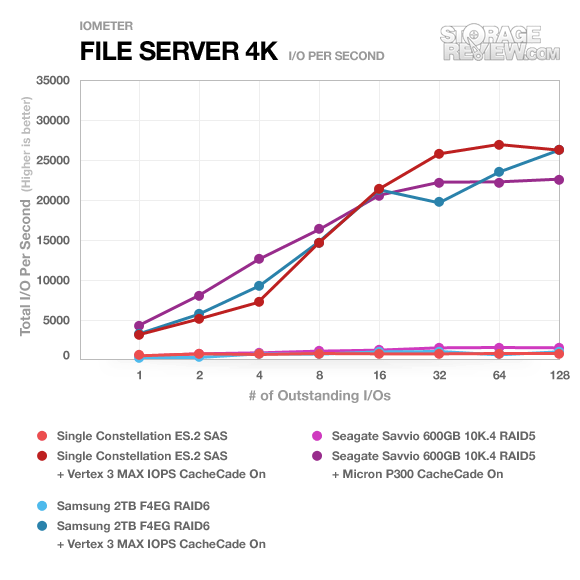 The same trend is followed for the file server profile, with the cached SSD/HDD speeds not being held back by anything but their own individual speeds. Taking a closer look at the Seagate Savvio’s paired with the Micron P300 SSD at the highest queue depth, the comparison is 1,157 IOPS to 22,902 IOPS between cold and hot data speeds

Our webserver profile is read-only with a spread of transfer sizes from 512-byte to 512KB. 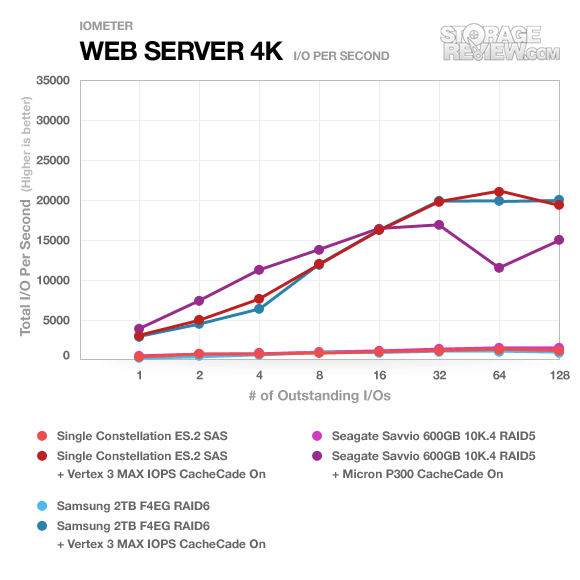 In this setup the configurations using the SandForce SF-2200 processor won out in the speed game to the Micron P300 thanks to its faster read speeds and offered huge gains in performance. Looking at the Samsung RAID6 array speeds jumped from 478 IOPS or 7.54MB/s to 20,079 IOPS and 308MB/s.

The last profile looks at a workstation, with a 20% write and 80% read mix around 8K transfers. 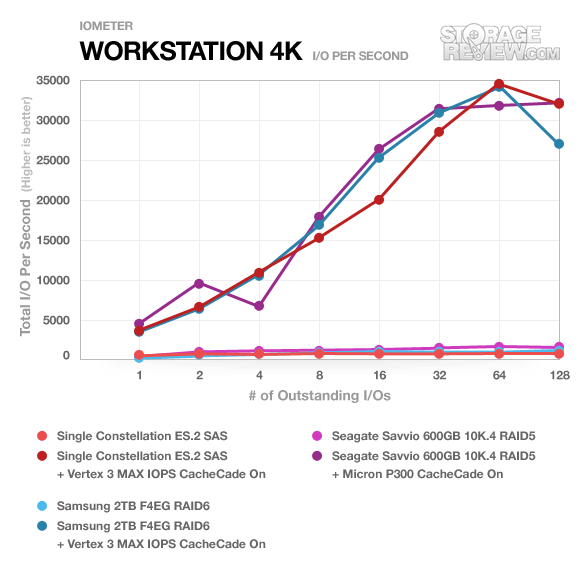 With a high mix of read transfers all arrays perform remarkably well with dramatic gains across the board. In the case of the Seagate Constellation ES.2, performance jumped from 267 IOPS to 32,422 IOPS at the 128 queue depth level.

To really see how drives perform under normal work-loads you need to record the exact traffic being passed to and from the device, and then use that to compare drives against one another. For this reason we turned to our StorageMark 2010 traces, which include consumer traces covering HTPC,  productivity, and gaming scenarios and enterprise traces including a mail-server and web server scenario. 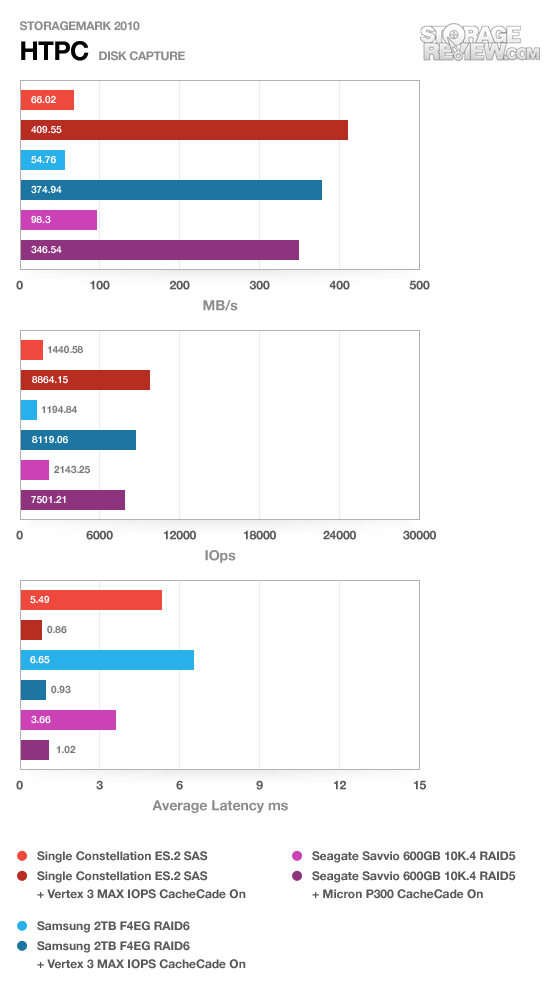 We found that CacheCade Pro 2.0 pulled through very well, posting an average gain of 512% in the HTPC trace on our test arrays. 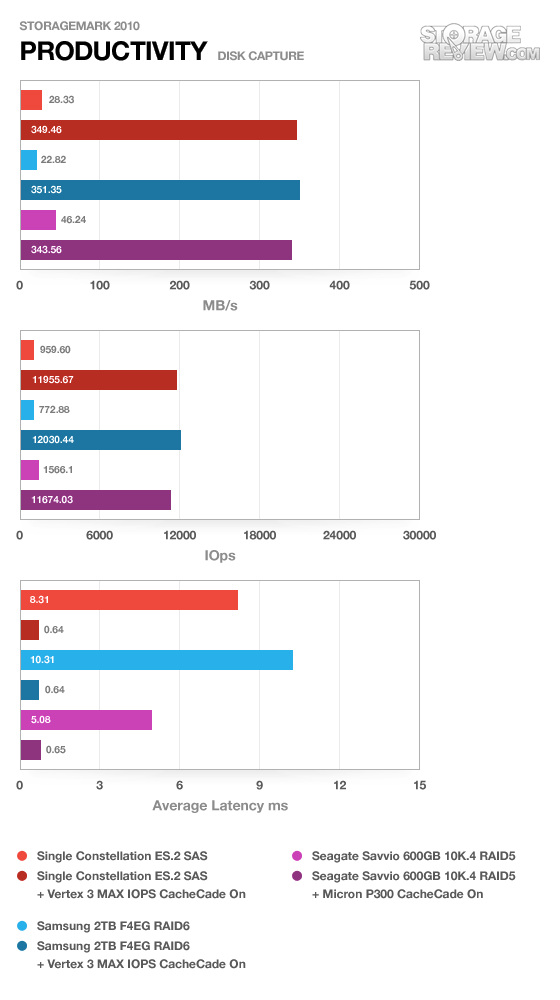 In the productivity trace the average gain was 1,080% with the largest jump seen with the Samsung F4EG array with caching enabled.

Our third client-based real-life test covers disk activity in a gaming environment. Unlike the HTPC or Productivity trace, this one relies heavily on the read performance of a drive. To give a simple breakdown of read/write percentages, the HTPC test is 64% write, 36% read, the Productivity test is 59% write and 41% read, while the gaming trace is 6% write and 94% read. The test consists of a Windows 7 Ultimate 64-bit system pre-configured with Steam, with Grand Theft Auto 4, Left 4 Dead 2, and Mass Effect 2 already downloaded and installed. The trace captures the heavy read activity of each game loading from the start, as well as textures as the game progresses. In this trace we recorded 426MB being written to the drive and 7,235MB being read. 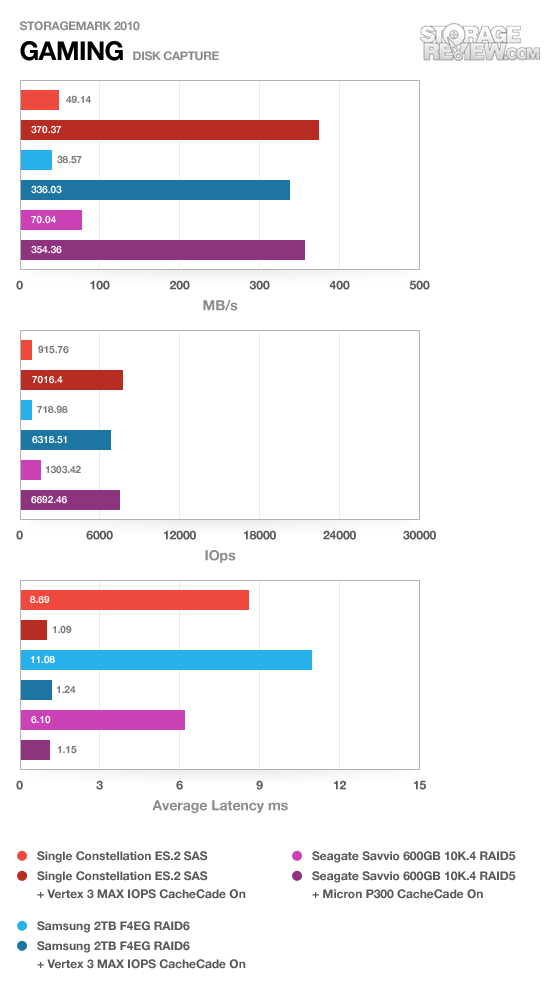 Average improvement in our read-heavy gaming trace was a healthy 682%, with the largest jump seen by the single Seagate Constellation ES.2.

Our first enterprise trace covers a Microsoft Exchange mail-server environment. We captured the activity of our StorageReview mail server over a period of a few days. This server hardware consists of a Dell PowerEdge 2970 running Windows Server 2003 R2 environment operating off of three 73GB 10k SAS hard drives in RAID5 on the Dell Perc 5/I integrated controller. The trace consists of many small transfer requests, with a strong 95% read load with 5% write traffic. 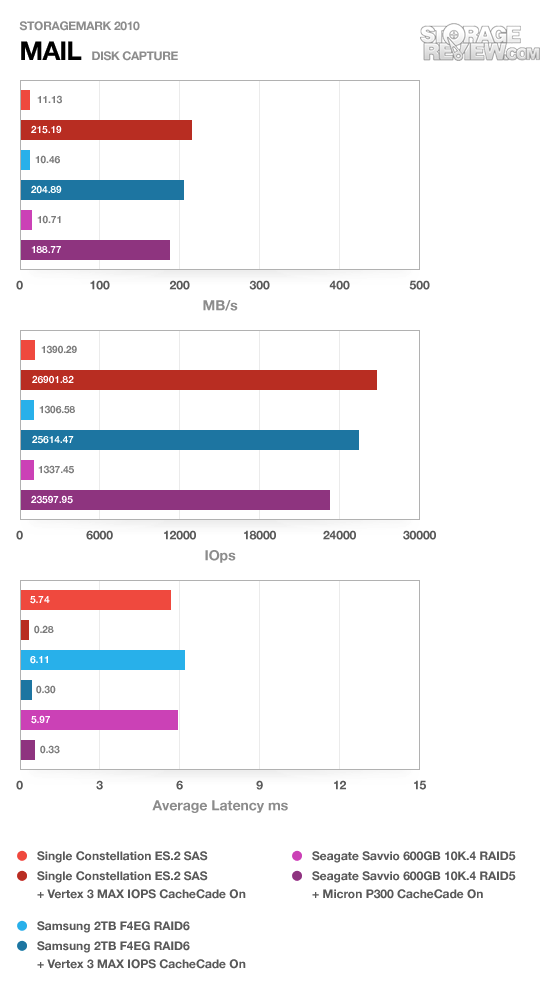 The mail server trace saw some of the largest gains across the board, with the average for each configuration being 1,868% between cached and uncached.

Our webserver trace was captured on a live webserver handling thousands of visitors per day. With active visitor logging, an average transfer size of 16K with a peak of 1024K, this trace was write-heavy having a 33% read / 67% write mixture. 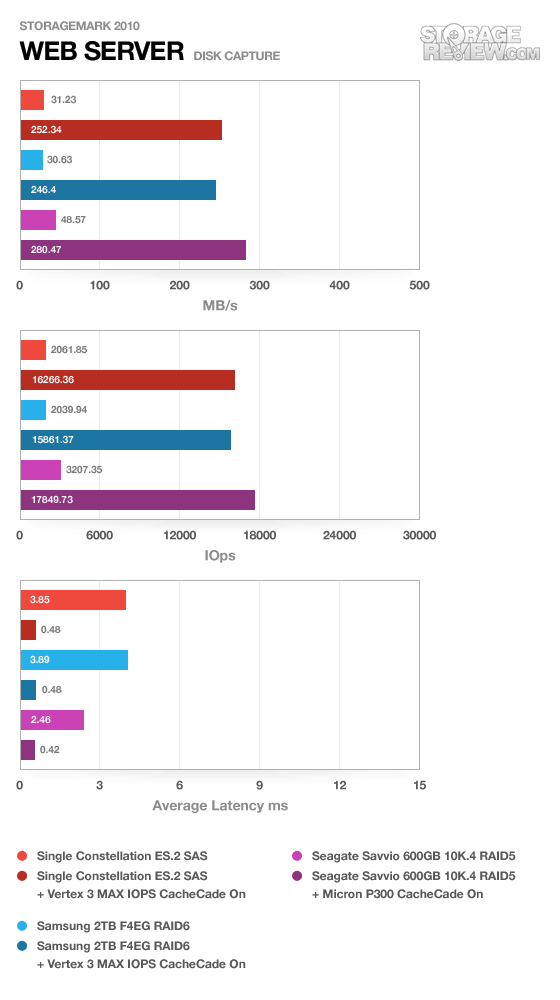 In our webserver trace the average gain seen was 684% between the uncached and fully cached storage arrays.

LSI’s CacheCade Pro 2.0 hardware/software setup is really hard to beat in the caching arena, especially considering the low cost of the software. We saw significant gains across the board when comparing cold to hot (full cached) benchmark results, with the highest real-world increasing being in our mail server trace that saw an improvement of over 1,800%. The only thing holding these improvements back was the speed of the SSD caching array which can be customized to suit the exact needs of the environment it’s being used in.

When it comes down to it, the entire point of caching is to get SSD speeds for frequently accessed data. Using CacheCade Pro 2.0 you can build an array of hard drives to whatever size you require and only add in as many SSDs you need to meet the hot data size or speed requirements. The expensive alternative would be creating an array entirely out of SSDs to match the capacity required at the needed speeds or sizing an array of thousands of short-stroked hard drives to meet the IOPS requirement over the capacity needed. Both of those alternatives are very costly, with the short-stroked hard drive method requiring vast amounts of physical space and power to even implement making it not even feasible in most cases.

The cost to implement a CacheCade array is minimal at only $270 for the software package. For the prosumer or enthusiast who needs more speed over an array of disks, chances are you may have a compatible LSI MegaRAID card already, so adding the software cost isn’t prohibitive. On the enterprise side, you are almost definitely using a compatible LSI RAID card and $270 is peanuts compared to the total cost of the server or storage array in use. In all cases, for a minimal cash outlay users get SSD speeds matched with cheap hard drive storage for the bulk of the load – one of the few win-win scenarios in technology.

LSI’s MegaRAID CacheCade Pro 2.0 software gives enterprise and enthusiasts alike a way to drive SSD speeds over a large hard drive array, with minimal additional cost. From the workstation to data center, CacheCade offers a fantastic value and is absolutely a must-have enhancement for those looking to drive the best performance per dollar out of their storage.