During their Step Ahead event in Beijing, Memblaze launched a new series of 500 NVME drives as well as an expansion of its 900 line to 910 and 916. We will be looking at the 910 series in this review. The new 910 drives are offered in two form factors and leverage 64-Layer 3D NAND, which allows the drives to come in capacities as high as 16TB. This higher density can lead to denser racks or rack consolidation in the data center.

During their Step Ahead event in Beijing, Memblaze launched a new series of 500 NVME drives as well as an expansion of its 900 line to 910 and 916. We will be looking at the 910 series in this review. The new 910 drives are offered in two form factors and leverage 64-Layer 3D NAND, which allows the drives to come in capacities as high as 16TB. This higher density can lead to denser racks or rack consolidation in the data center. 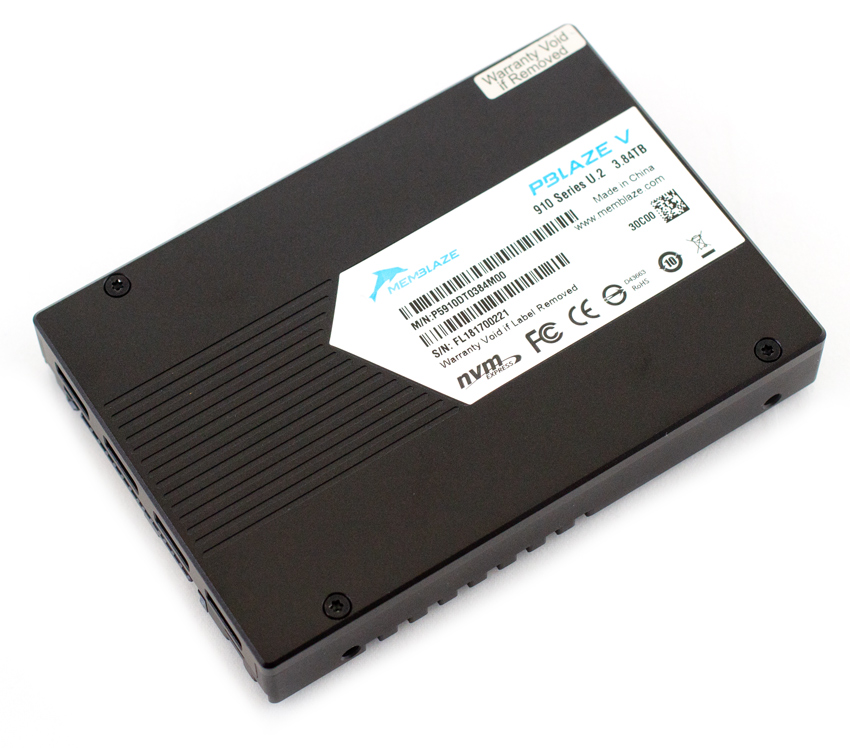 Aside from leveraging 64-Layer to hit higher capacities, the Memblaze PBlaze5 910 claims higher performance than previous models. The company states the drive can hit sequential reads up to 3.5GB/s and throughput up to 835K IOPS, all the while having sub-millisecond latency. The drive also comes with built in high availability, being dual ported, thus a single path of failure is removed. The 910 has 1 DWPD of endurance as well as two million hours MTBF. Ideal use cases include: database, searching, indexing, CDN, Cloud and Hyper-scale, SDS, deep learning and big data analytics, ERP, SAP HANA, BOSS, banking, taxing, high frequency trading, and online payment. 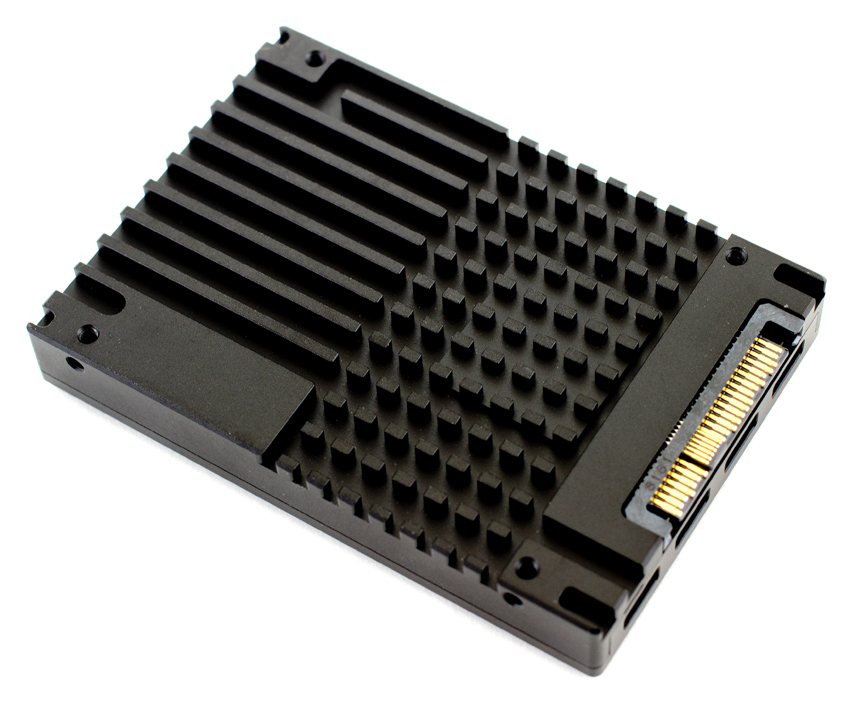 In order to understand the performance characteristics of enterprise storage devices, it is essential to model the infrastructure and the application workloads found in live-production environments. Our benchmarks for the Memblaze PBlaze5 910 are therefore the MySQL OLTP performance via SysBench and Microsoft SQL Server OLTP performance with a simulated TCP-C workload. For our application workloads, each drive will be running 2-4 identically configured VMs.

For our SQL Server transactional benchmark, the Memblaze PBlaze5 910 U.2 came in at the bottom of the pack with 12,546.5 TPS, lower than three other PBlaze drives.

Surprisingly, the 910 also had the highest latency at 38.8ms.

With the Sysbench transactional benchmark, the U.2 910 did better hitting 6,664.6 TPS landing about in the middle of the pack tested.

With Sysbench average latency the U.2 910 again found itself in the middle of the pack with a latency of 19.2ms.

Our worst-case scenario latency benchmark saw the U.2 910 land again near the middle with 37.8ms.

With the Houdini test the 910 U.2 placed middle to lower end, but right in line with other Memblaze products with a score of 3,093.8 seconds. 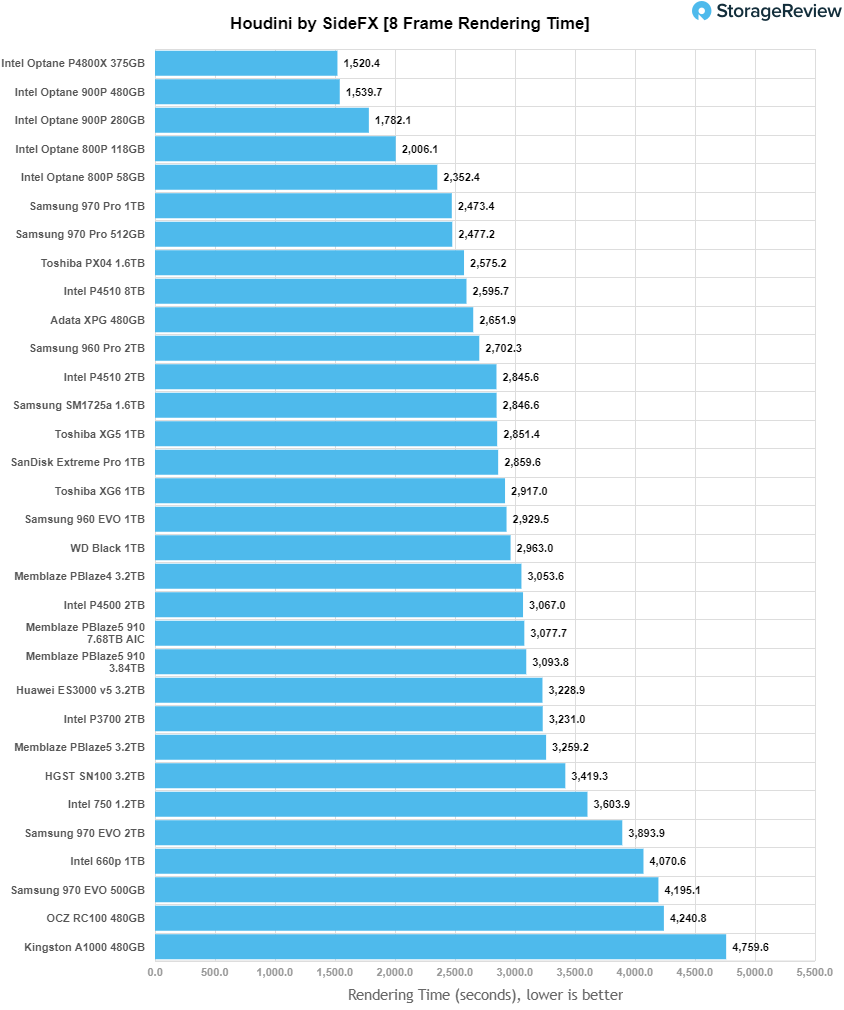 In our first VDBench Workload Analysis, Random 4K Read, the Memblaze PBlaze5 910 U.2 was able to stay under 1ms throughout with a peak of 665,679 IOPS and a latency of 191.3μs placing the drive roughly in the middle.

4K random write again saw sub-millisecond latency throughout. The 910 U.2 placed second to last with a peak performance of 296,639 IOPS and a latency of 429.6μs.

VDI FC Initial Login saw the 910 U.2 in fourth still but farther behind the top three drives with a peak performance of 66,925 IOPS and a latency of 445.1μs.

The Memblaze PBlaze5 910 is the companies new NVMe data center drive that leverage 64-Layer 3D NAND. The drive comes in two form factors (U.2 for this review) and in capacities of 3.84TB, 7.68TB, and 15.36TB. Memblaze claims performance of up to 3.5GB/s read, 3.5GB/s write, and throughput of up to 835K IOPS read and 150K IOPS write. The drive meets the criteria for a plethora of use cases and comes with security options such as AES 256 data encryption and supports TRIM function up to 8TB/s.

Looking at application workload analysis performance, the 910 U.2 came in last place in our SQL Server benchmarks with 12,546.5 TPS and an average latency of 38.8ms. In Sysbench the drive performed a bit better landing in the middle of the pack with 6,664.6 TPS, and average latency of 19.2ms, and a worst case scenario latency of 37.8ms. In our Houdini by SideFX benchmark the 910 U.2 had a score of 3,093.8 seconds putting it in the lower end of the field but in line with other Memblaze products.

For VDBench the Memblaze PBlaze5 910 U.2 had sub-millisecond latency throughout all tests. The drive tended to fall in the middle to mid-bottom of the pack in all tests. Key results include 666K IOPS on 4K read, 297K IOPs on 4K write, 2.4GB/s on 64K read, and 1.1GB/s on 64K write. The SQL results held around a quarter million IOPS with the Oracle tests running between 177K IOPS and 212K IOPS.

Overall it gave good performance, but performance did start to slip compared to the previous generation PBlaze5 900.