Memblaze has released another NVMe SSD series with the PBlaze5. This marks the company’s second generation of NVMe SSD products after the PBlaze4. The new drive comes in two form factors, U.2 and HHHL AIC, and in two series, the 700 and 900 series. The 700 series runs up in capacity to 11TB and is aimed for data center usage. The 900 series has higher endurance and is aimed for enterprise applications.

Memblaze has released another NVMe SSD series with the PBlaze5. This marks the company’s second generation of NVMe SSD products after the PBlaze4. The new drive comes in two form factors, U.2 and HHHL AIC, and in two series, the 700 and 900 series. The 700 series runs up in capacity to 11TB and is aimed for data center usage. The 900 series has higher endurance and is aimed for enterprise applications. 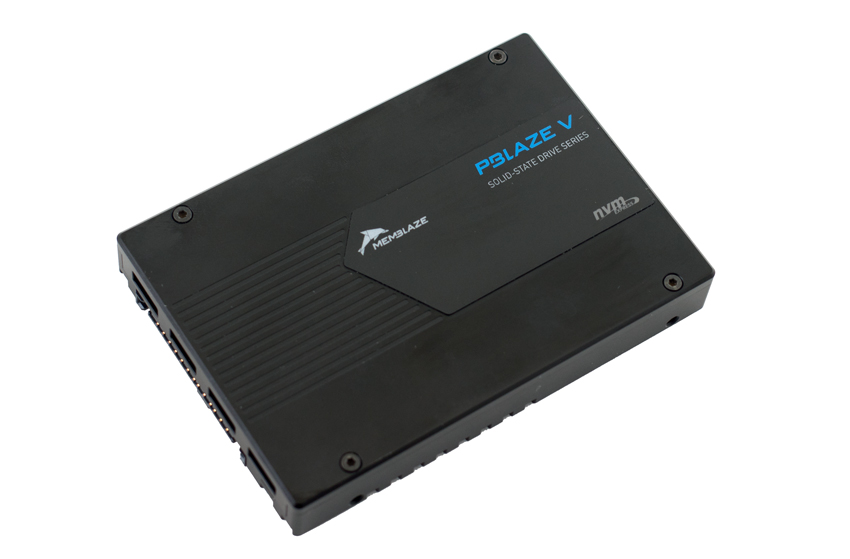 Both series are designed for the enterprise and have performance claims of up to 6GB/s sequential speeds with read latency as low as 90μs. Where the two series diverge is that the 700 series has a lower cost, lower endurance, and higher capacity. The 900 series, on the other hand, has higher endurance, dual ports for higher availability, and data encryption. These main differences lend themselves to different use cases: databases, cloud, hyperscale, SDS, Big Data, 3D rendering for the 700 series and mission critical database, ERP, SAP HANNA, BOSS, banking, taxing high frequency trading, and online payment for the 900 series.

The Memblaze PBlaze5 we are reviewing is a 2.5” U.2 form factor design. The drive has a solid, matt black case. The top of the drive has branding on the right-hand side. 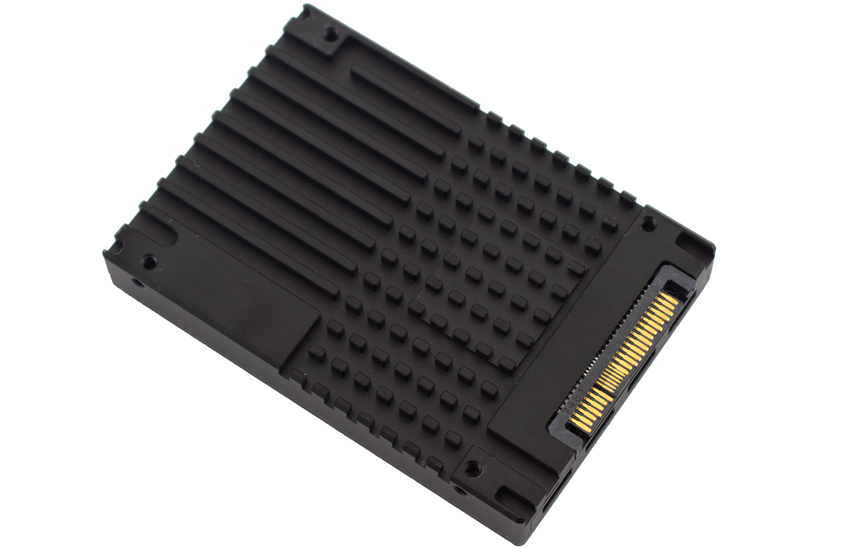 The bottom of the drive is taken up almost entirely by a heat sink.

On either end of the drive there are openings to aide in cooling. On the side away from the NVMe interface one can see the second port.

Our Enterprise SSD reviews leverage a Lenovo ThinkSystem SR850 for application tests and a Dell PowerEdge R740xd for synthetic benchmarks. The ThinkSystem SR850 is a well equipped quad-CPU platform, offering CPU power well in excess of what’s needed to stress high-performance local storage. Synthetic tests that don’t require a lot of CPU resources use the more traditional dual-processor server. In both cases, the intent is to showcase local storage in the best light possible that aligns with storage vendor maximum drive specs.

In order to understand the performance characteristics of enterprise storage devices, it is essential to model the infrastructure and the application workloads found in live production environments. Our benchmarks for the Memblaze PBlaze5 are therefore the MySQL OLTP performance via SysBench and Microsoft SQL Server OLTP performance with a simulated TCP-C workload. For our application workloads, each drive will be running 2-4 identically configured VMs.

For our SQL Server transactional benchmark, the Memblaze PBlaze5 landed in second behind the PBlaze4 with 12,6239.9 TPS. Though it should be noted that the difference in results from the lowest, HGST SN100, to the highest, Memblaze PBlaze4, was only 41.4 TPS. It should also be noted that the memblaze was ran with the original firmware and then updated firmware throughout our tests and can be seen in the results.

For SQL average latency, the PBlaze5 came in second once more with 7.5ms latency, with the PBlaze4 only having 5ms.

With the Sysbench transactional benchmark, we saw the Memblaze PBlaze5 take the top spot with 8,260.5 TPS.

Looking at Sysbench average latency, the PBlaze5 again had the best score with 15.5ms.

In terms of our worst-case MySQL latency scenario (99th percentile latency), the PBlaze5 took the top spot with 29.4ms.

In our Houdini workload, the Memblaze PBlaze5 lagged behind the PBlaze4 and others in the NVMe group, with an 8-frame rendering time of 3,259 seconds. 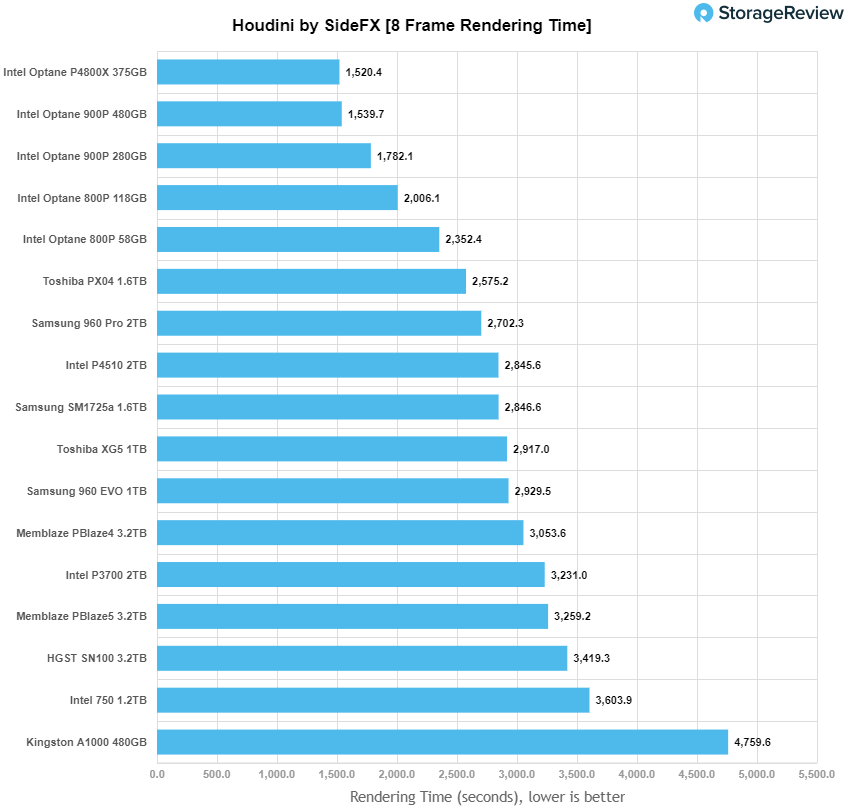 When it comes to benchmarking storage devices, application testing is best, and synthetic testing comes in second place. While not a perfect representation of actual workloads, synthetic tests do help to baseline storage devices with a repeatability factor that makes it easy to do apples-to-apples comparison between competing solutions. These workloads offer a range of different testing profiles ranging from “four corners” tests, common database transfer size tests, to trace captures from different VDI environments. All of these tests leverage the common vdBench workload generator, with a scripting engine to automate and capture results over a large compute testing cluster. This allows us to repeat the same workloads across a wide range of storage devices, including flash arrays and individual storage devices. Our testing process for these benchmarks fills the entire drive surface with data, then partitions a drive section equal to 25% of the drive capacity to simulate how the drive might respond to application workloads. This is different than full entropy tests which use 100% of the drive and take them into steady state. As a result these figures will reflect higher sustained write speeds.

In our first VDBench Workload Analysis, we looked at random 4K read performance. All drives tested had sub-millisecond latency throughout the benchmark. The Memblaze PBlaze5 peaked at 748,510 IOPS with a latency of 170μs, making it the top performer by far.

Next we looked at 4K write performance, and here the PBlaze5 peaked at 597,647 IOPS and 211μs latency, again the top performance by a wide margin.

Moving to sequential performance, we looked at our 64K benchmarks. With 64K sequential read, the PBlaze5 peaked at 43,653 IOPS or 2.72GB/s with a latency of 366μs, again taking the top spot.

Next we looked at our SQL workloads where again no drive went over 1ms latency. The Memblaze PBlaze5 peaked at 243,899 IOPS with a latency of 131μs.

Next we switched over to our VDI clone test, Full and Linked. For VDI Full Clone Boot, the PBlaze5 once again took the top spot with a peak of 184,936 IOPS with a latency of 189μs.

On the VDI LC Boot test, we saw that the Toshiba PX04 ran much closer to the PBlaze5 than any other drive had to up to this point. The PBlaze5 still came out on top with a peak score of 88,179 IOPS and a latency of 180μs.

The VDI LC Initial Login again saw the PBlaze5 break away with a peak score of 41,657 IOPS and 189μs latency.

The Memblaze PBlaze5 NVMe SSD is the company’s second-generation NVMe enterprise drive. The drive comes with a maximum capacity of 11TB (for the 700 series) and quotes speeds of 6GB/s, over 1 million IOPS, and latency as low as 15μs. The drive comes in two form factors: a hot-swappable 2.5” U.2 and a HHHL AIC. The drive is also offered with two series: the lower endurance, lower cost, higher capacity 700 series and the higher endurance, higher availability, and encrypted 900 series. For our review we measured the performance of the 900 series.

Looking at performance, in our application workload analysis, the Memblze PBlaze5 put up good numbers in SQL Server, with 12,629.9 TPS and an average latency of 7.5ms; however, the PBlaze4 was able to beat it by 2.5ms. In Sysbench, the PBlaze5 had the top score in the transactional test, 8,260.5 TPS, and average latency, 15.5ms, and worst-case scenario, 29.4ms. In our Houdini workload, the PBlaze5 fell behind the prior generation drive and other NVMe enterprise SSDs.

The Memblaze PBlaze5 NVMe SSD offers a nice progressive update over the prior-gen, while setting a capacity mark of 11TB, which is very high for NVMe interface SSDs.