The Micron 9100-series is a high-performance PCIe NVMe SSD that is configured as a read-centric or mixed-workload drive in capacities ranging from 800GB to 3.2TB. The two series are split into the PRO and MAX models, where the MAX-class leverages additional over-provisioning to improve write performance and endurance. Micron partnered with Memblaze for the launch of the 9100-series, which leverages the Memblaze PBlaze4 product with Micron NAND. As with all NVMe devices, the 9100 is designed to bring better performance and lower latency. The Micron 9100 is targeted for use cases in Big Data, content deliver, database solutions, hyperscale, high performance computing (HPC), and private cloud.

The Micron 9100-series is a high-performance PCIe NVMe SSD that is configured as a read-centric or mixed-workload drive in capacities ranging from 800GB to 3.2TB. The two series are split into the PRO and MAX models, where the MAX-class leverages additional over-provisioning to improve write performance and endurance. Micron partnered with Memblaze for the launch of the 9100-series, which leverages the Memblaze PBlaze4 product with Micron NAND. As with all NVMe devices, the 9100 is designed to bring better performance and lower latency. The Micron 9100 is targeted for use cases in Big Data, content deliver, database solutions, hyperscale, high performance computing (HPC), and private cloud. 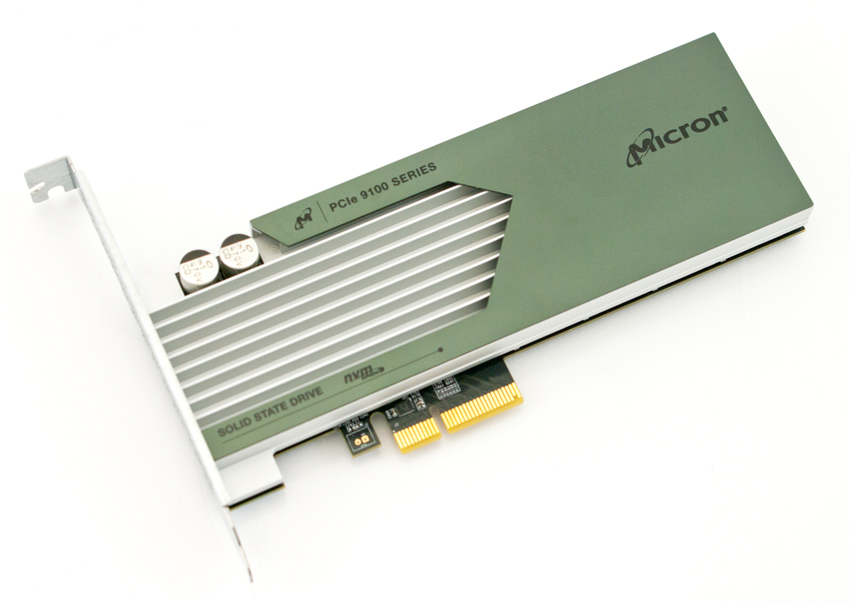 Aside from the benefits one would expect from NVMe (better performance, using fewer drives to get even more performance), the 9100 comes with power-loss protection, two endurance options: read-centric or mixed use, and XPERT firmware features. Aside from the HHHL add-in card, the 9100 also comes in a U.2 form factor for familiar front-loading. While most new operating systems support the NVMe protocol native driver support, Micron has also included their own drivers for additional performance or support for older environments.

Micron offers five capacities: 800GB, 1.2TB, 1.6TB, 2.4TB and 3.2TB. The drives are also available in two classes which include a PRO or read-centric class, and a MAX or mixed-use class. All capacities are the PRO class with the exception of the drive we are testing the 2.4TB and the 1.2TB, both of which are the mixed-use class. Both the 3.2TB and 2.4TB use 4TB of NAND; the key difference is that the 2.4TB, or MAX class, is over-provisioned for better performance and enhanced wear-leveling, which gives it greater endurance. The case is the same with the 1.6TB PRO and the 1.2TB MAX, again with the smaller capacity drive having the same raw capacity, just with overprovisioning.

The Micron 9100 drive we are looking at today is the 2.4TB MAX class that is a half-height half-length add-in card (HHHL AIC). On one side it has a silver heat sink with a dark gray cover with Micron branding on it. The other side is an exposed circuit board where one can see the Micron 16nm MLC NAND packs. This particular drive has thirty-two 128GB NAND packs (16 on either side) and nine 512MB Micron DRAM packs (5 on the bottom, 4 on the other side covered by the heat sink). 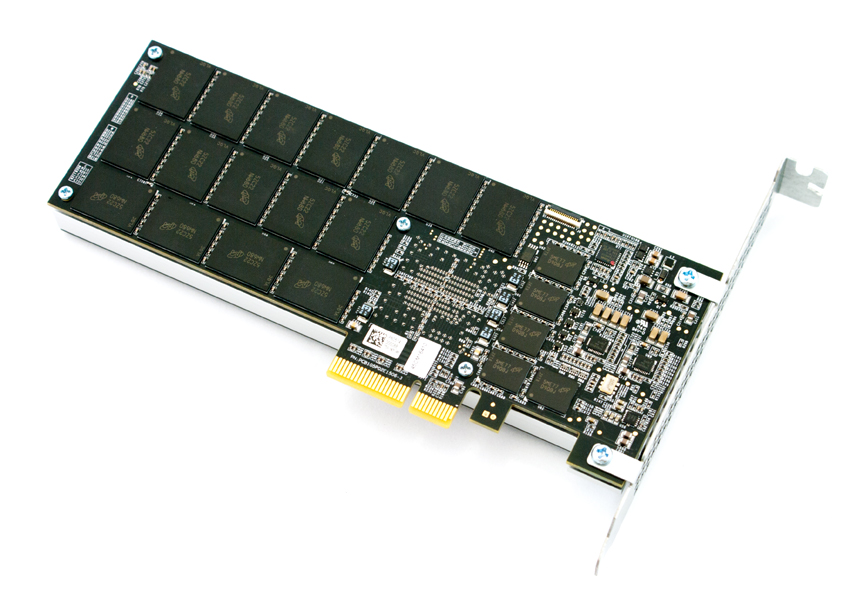 The 9100 uses a PCIe Gen 3 x 4 connector. Our AIC has a HHHL form-factor to fit in full-height and half-height PCIe slots.

We compared the Micron 9100 MAX 2.4TB HHHL SSD to the following HHHL models:

In order to understand the performance characteristics of enterprise storage devices, it is essential to model the infrastructure and the application workloads found in live production environments. Our first benchmarks for the Micron 9100 are therefore the MySQL OLTP performance via SysBench and Microsoft SQL Server OLTP performance with a simulated TCP-C workload. For our application workloads each drive will be running 4 identically configured VMs. 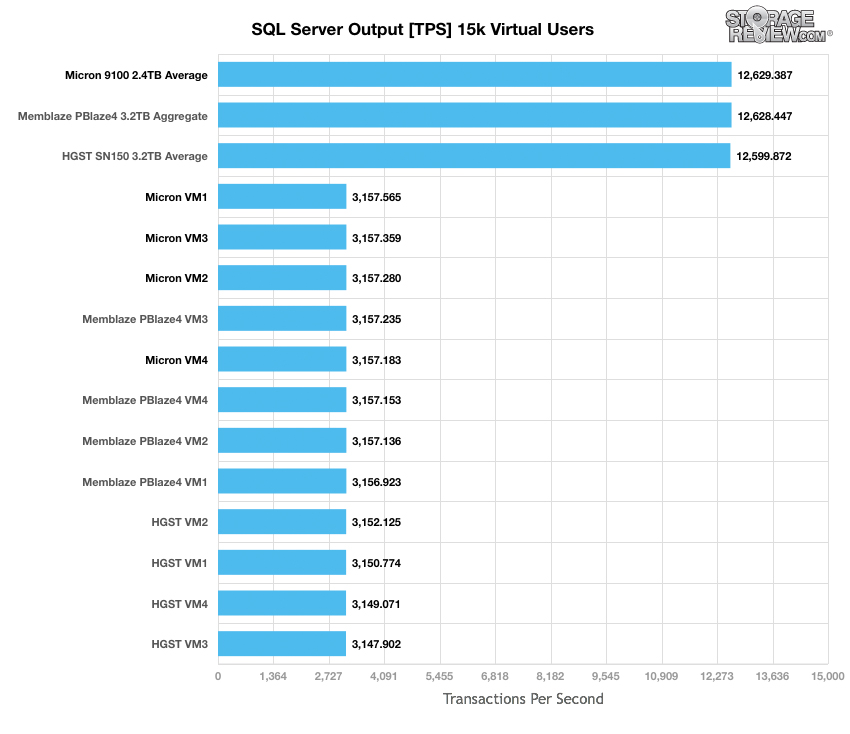 Average latency during the 15k virtual user SQL Server benchmark test showed the Micron 9100 once again taking the top spot with an average score of 6.8ms. 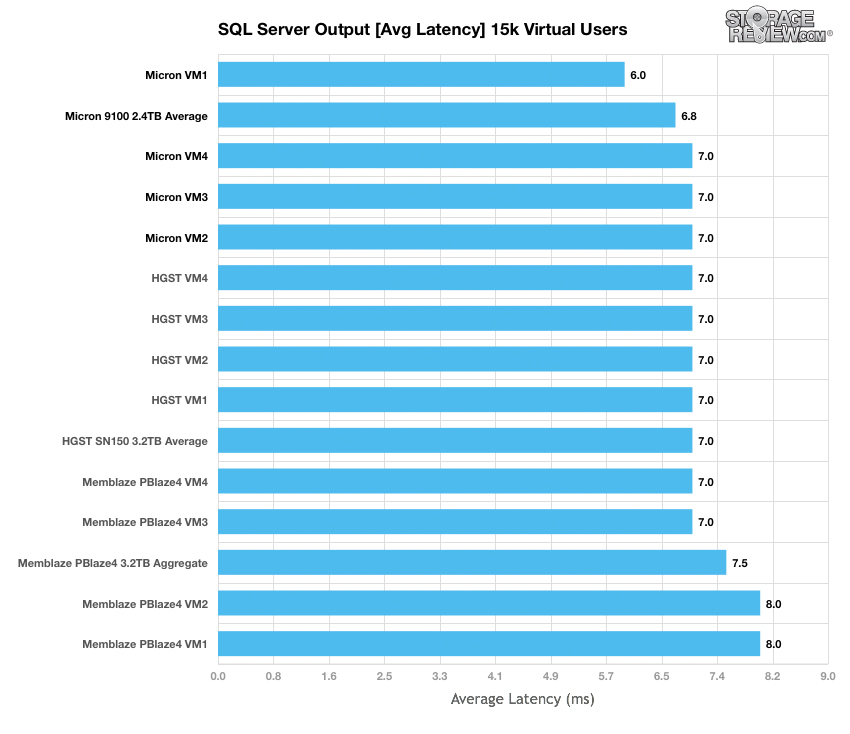 The next application benchmark consists of a Percona MySQL OLTP database measured via SysBench. This test measures average TPS (Transactions Per Second), average latency, as well as average 99th percentile latency. Percona and MariaDB are using the Fusion-io flash-aware application APIs in the most recent releases of their databases, although for the purposes of this comparison, we test each device in their "legacy" block-storage modes.

In the average transactions per second benchmark, the Micron 9100 was once again the best performer, this time pulling away from the pack slightly. The individual VMs showed performances from 1,538 to 1,597 TPS, with an aggregate 6,224.6 TPS. 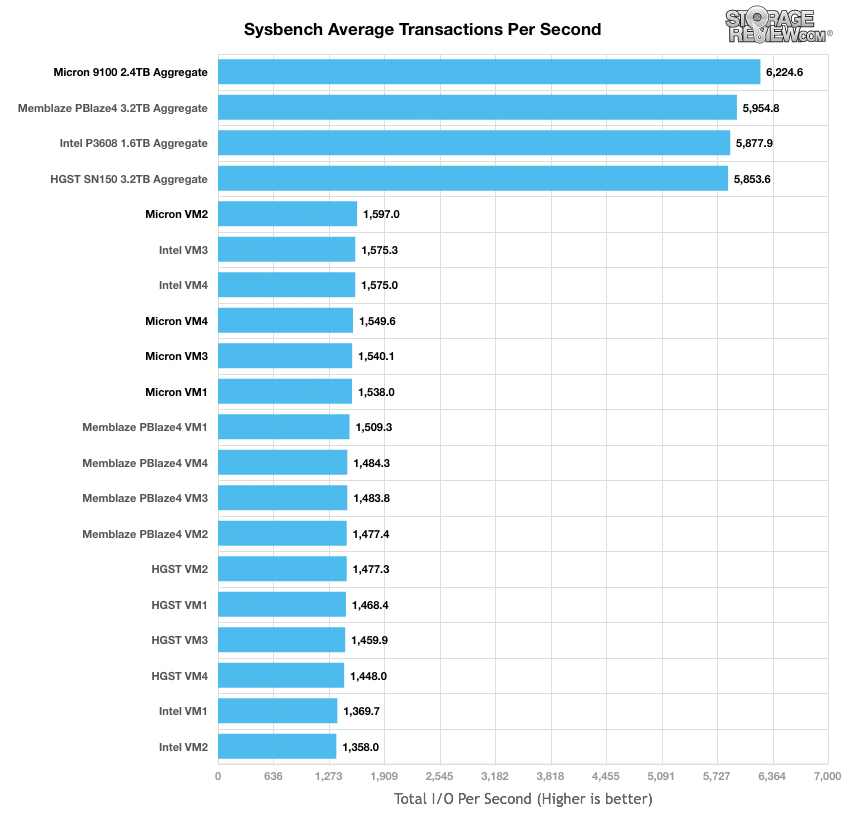 When looking at our average latency results, the Micron 9100 continued its reign at the top spot, though all the drives were within roughly 3ms of one another. The individual VMs ran between 20.04ms and 20.8ms, with an average score of 20.57ms. 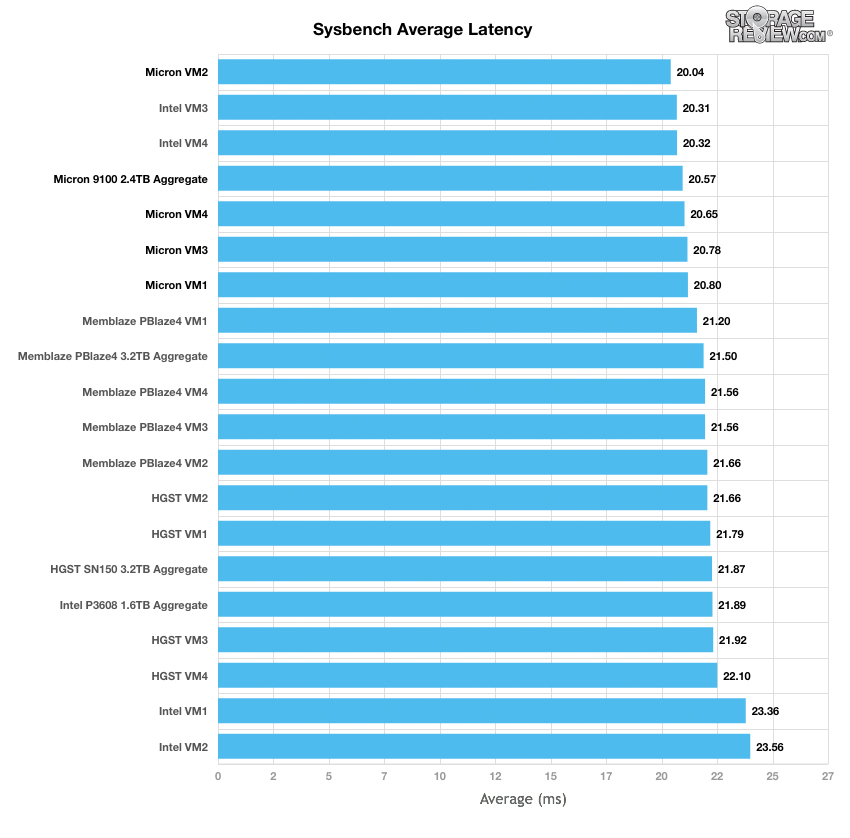 In our MySQL 99th percentile latency benchmark (worst-case scenario), the Micron 9100 finished up our round of testing consistently at the top of the drives tested. Individual VMs ran from 36.06ms to 36.41ms, with an average score of 36.28ms. 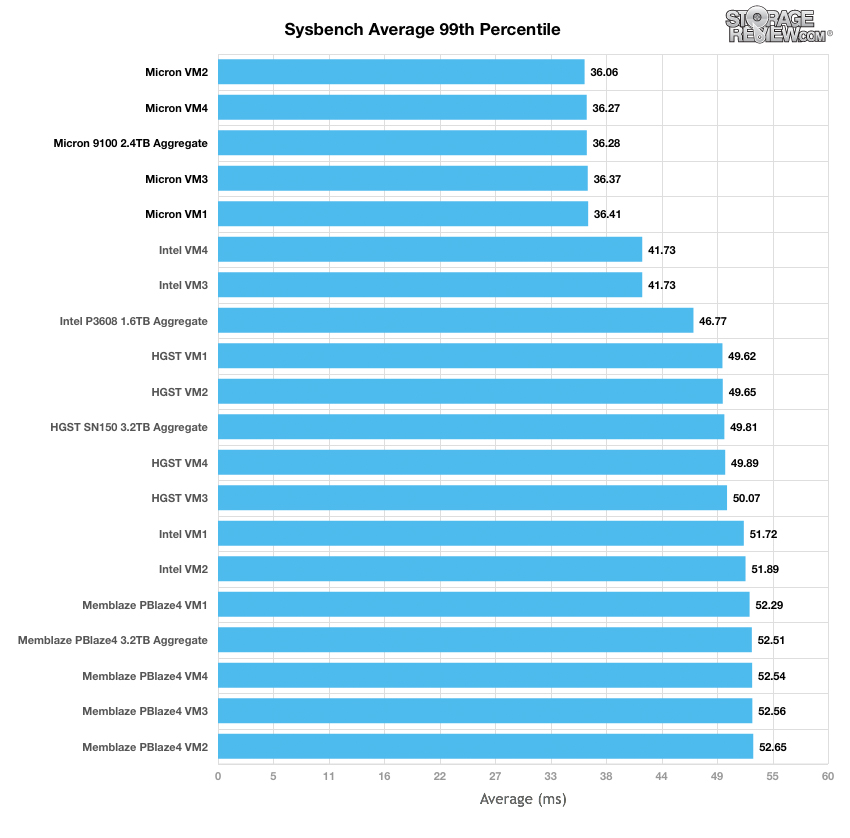 The Micron 9100 is an enterprise NVMe SSD that comes in 2.5" and HHHL form factors. The drive runs in capacities from 800GB to 3.2TB and ships with different over-provisioning levels for its Pro or MAX models. As with all NVMe devices, the Micron 9100 will bring better performance and lower latency and was designed specifically for Big Data, content delivery, database solutions, hyperscale, HPC, and private cloud. The drive also offers power-loss protection and Micron’s XPERT firmware features (RAIN, data path protection, reduced command access latency, adaptive read and thermal protection).

Micron sampled the 2.4TB MAX version of their HHHL 9100 SSD, which offers increased write performance at the cost of usable capacity. This makes the drive a bit difficult to compare apples to apples to competing models, which offer identical NAND configurations, with the exception of how much over-provisioning they shipped their drives with. So while the Micron 9100 MAX offered top spots across all of our application benchmarks, we'd most likely see similar performance from those competing models in the same heavily over-provisioned configuration. The 9100 took top spot in every benchmark we ran it through. While there wasn’t much difference in our SQL Server throughput (roughly 30 TPS) the 9100 took the top spot with an aggregate score of 12,629 TPS. SQL Server average latency was a similar story: all drives performed close to one another with the 9100 narrowly beating out the others with an average score of 6.8ms. With our Sysbench testing the 9100 was able to pull away from the other drives a bit, taking top spot in each of our tests with aggregate scores of 6,224 TPS, 20.57ms average latency, and 36.28ms worst-case scenario latency. The additional over-provisioning showed most of its strength in the 99th percentile latency chart, where results were much tighter than competing drives.

The Micron 9100 MAX is the highest performing enterprise NVMe SSD we have yet to test in our VMware environment, offered in 2.5" and HHHL form-factors.