In August of 2017, we posted our review of the NetApp A200 all flash array. We really enjoyed the performance and feature set; ultimately it earned one of only five Editor’s Choice Awards we gave out in 2017. It was with much excitement then that we obtained the next system from NetApp for review. The A300 was launched in the fall of 2016, and firmly targets the midrange storage customer. This isn’t entirely different than the A200’s target; the A300 just adds more performance and scalability oomph over its smaller cousin. The A300 of course runs the latest version of ONTAP and supports SSDs up to 30TB and is just as easy as the A200 to set up.

In August of 2017, we posted our review of the NetApp A200 all flash array. We really enjoyed the performance and feature set; ultimately it earned one of only five Editor’s Choice Awards we gave out in 2017. It was with much excitement then that we obtained the next system from NetApp for review. The A300 was launched in the fall of 2016, and firmly targets the midrange storage customer. This isn’t entirely different than the A200’s target; the A300 just adds more performance and scalability oomph over its smaller cousin. The A300 of course runs the latest version of ONTAP and supports SSDs up to 30TB and is just as easy as the A200 to set up.

Architecturally the units are a little different. While the A200 chassis combines drives and controllers in one 2U package, the A300 has a dedicated set of controllers in a 3U chassis and the drives are added as shelves (12Gb/s SAS). The A300 requires just 12 SSDs to start but scales to over 140PB raw (560PB effective) in NAS config and 70PB raw (280PB effective) as SAN. NetApp supports 10GbE, 40GbE as well as Fibre Channel up to 32Gb and NVMe/FC with the 32Gb FC adapter.

Our unit under review is configured with one DS224C shelf loaded with 24 960GB SSDs. Primary connectivity is eight 32Gb FC ports, through 2 dual-port cards in each controller. The A300 was running ONTAP version 9.4 at the time of the review.

The NetApp AFF A300 looks more or less like a slightly taller version of the A200. The bezel is silver and mainly designed for ventilation. NetApp branding is on the left side. Also on the left are the status LED lights. Across the front, we see the storage shelfs for inserting 2.5″ drives. 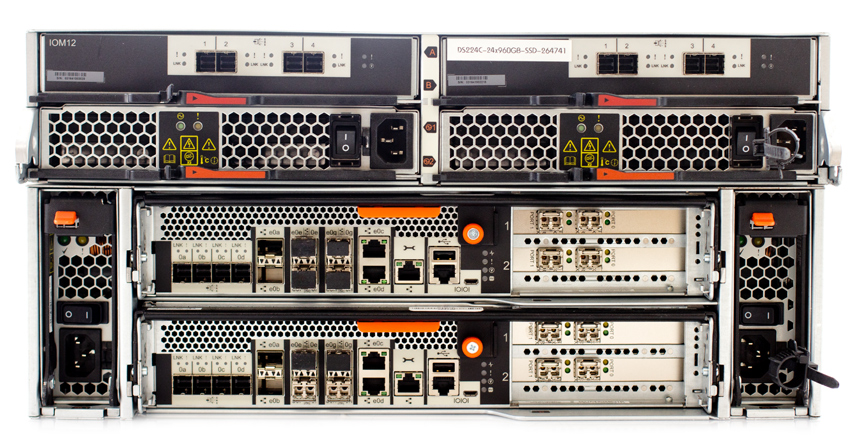 The rear of the device has redundant hot-swappable PSUs on either end, with hot-swappable fans as well. On the right side, next to the PSU, are four PCIe slots that allow for connections such as 40GbE and 32Gb FC, our model is loaded with four 32Gb FC cards. On the left, it is easy to see both controllers (one on top of the other). Here is where the SAS ports, as well as networking, and management ports are located.

For performance we will be comparing the A300 to the A200. Again this isn’t necessarily which one will perform better (the more powerful array, the A300, will win out). This is to show potential user what to expect given their performance and storage needs. In comparison of both NetApp models, we have full data reduction capabilities enabled, showing real-world performance. As we’ve noted in our previous A200 review, NetApp data reduction services have had a minimal impact towards performance.

The configuration of our NetApp AFF A300 included 8 32Gb FC ports as well as one 24-bay disk shelf. Out of the 24 960GB SSDs deployed in our A300, we split that up into two RAID-DP Aggregates consisting of each SSDs partitioned in half. While the drive count is the same as the previously reviewed A200, the A200 was completely topped out with CPU utilization. The A300 and subsequently higher models in the NetApp portfolio are each geared for deployments requiring more and more I/O and bandwidth.

The environment used to test the NetApp AFF A300 in our synthetic benchmarks consists of eight Dell EMC R740xd PowerEdge servers, each with a dual-port 16Gb FC HBA and a dual-switch FC fabric running on Brocade G620 switches.

This test uses SQL Server 2014 running on Windows Server 2012 R2 guest VMs, and is stressed by Quest’s Benchmark Factory for Databases. While our traditional usage of this benchmark has been to test large 3,000-scale databases on local or shared storage, in this iteration we focus on spreading out four 1,500-scale databases evenly across the A300 (two VMs per controller). 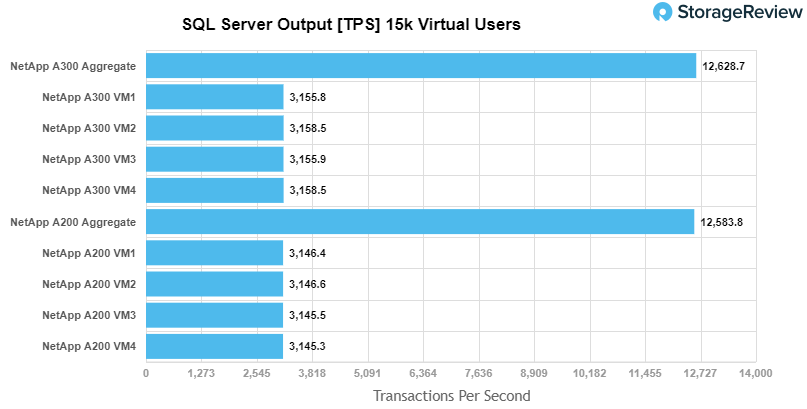 For average latency, the A300 had an aggregate score of 8ms, much faster than the A200’s 25ms. Individual VMs ranged from 6ms to 10ms. 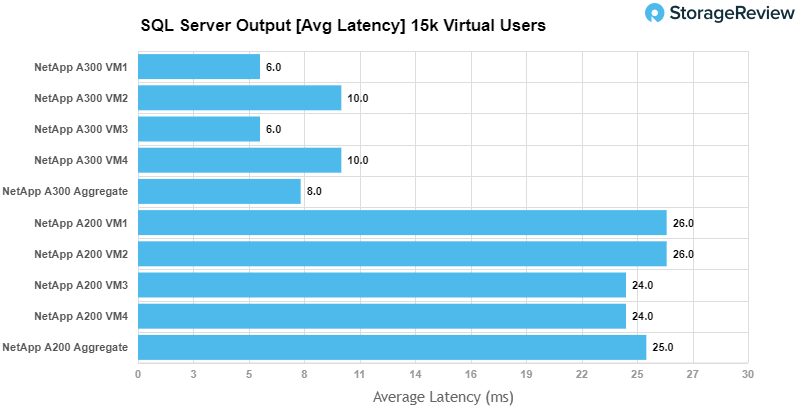 Each Sysbench VM is configured with three vDisks, one for boot (~92GB), one with the pre-built database (~447GB), and the third for the database under test (270GB). From a system resource perspective, we configured each VM with 16 vCPUs, 60GB of DRAM and leveraged the LSI Logic SAS SCSI controller. Load gen systems are Dell R730 servers; we range from four to eight in this review, scaling servers per 4VM group.

Switching over to sequential workloads, we look at peak 64K read performance, here the A300 made it to roughly 80K IOPS or 5GB/s before breaking sub-millisecond latency performance. The A300 peaked at about 84,766K IOPS or 5.71GB/s with 3.64ms latency before dropping off a bit compared to the A200’s peak of 60K IOPS or 3.75GB/s with a latency of 8.5ms.

For Oracle 80-20, we saw sub-millisecond latency until roughly 285K IOPS and a peak performance of 362,499 IOPS and a latency of 1.62ms. Again this showed over twice the performance and less than half the latency of the A200.

Next we switched over to our VDI Clone Test, Full and Linked. For VDI Full Clone Boot the A300 stayed under 1ms until about 225K IOPS and peaked at 300,128 IOPS with a latency of 3.46ms. This was a tremendous performance leap over the A200’s peak of 122K IOPS and latency of 8.6ms.

NetApp released the impressive A200 all-flash array last year that earned one of our Editor’s Choice awards. The release of the more powerful NetApp AFF A300 doesn’t represent a replacement for the A200, it is a more powerful AFA for users that need additional capacity and performance. The A300 is a 3U form factor for the dual active-active controller setup, plus disk shelves. The A300 can pack quite a bit more capacity than it’s smaller cousin: 140PB raw (560PB effective) in NAS and 70PB raw (280PB effective) as SAN. The A300 supports networking up to 40GbE and FC 32Gb.

In our reviews, we rarely compare units against each other, but in this case, the A200 to A300 comparison is appropriate if for nothing else to confirm what NetApp claims about the performance jump between the two systems. Where the A200 (and subsequently the A220) is great for smaller operations or perhaps even some ROBO scenarios, the A300 takes a big jump forward in terms of overall performance capabilities and is suitable for larger organizations with a lot of mixed workloads or perhaps for someone like a regional managed services provider. In the end, the A300 is quite similar to the A200, it’s just more in terms of scalability, IO port flexibility and overall performance. The NetApp A300 continues on where the A200 leaves off, making it another favorite in our lab and ultimately another great execution for NetApp’s ONTAP storage portfolio.