The Samsung 983 DCT is the company’s latest Data Center SSD. The 983 DCT leverages NVMe interface and comes in two form factors: 2.5” and M.2. The drive is built off of proven Samsung components and its battle proven V-NAND. The drive is specifically geared toward performance but also come end-to-end data protection, more efficient management through the Samsung SSD Toolkit software, and a 5-year warranty.

The Samsung 983 DCT is the company’s latest Data Center SSD. The 983 DCT leverages NVMe interface and comes in two form factors: 2.5” and M.2. The drive is built off of proven Samsung components and its battle proven V-NAND. The drive is specifically geared toward performance but also come end-to-end data protection, more efficient management through the Samsung SSD Toolkit software, and a 5-year warranty. 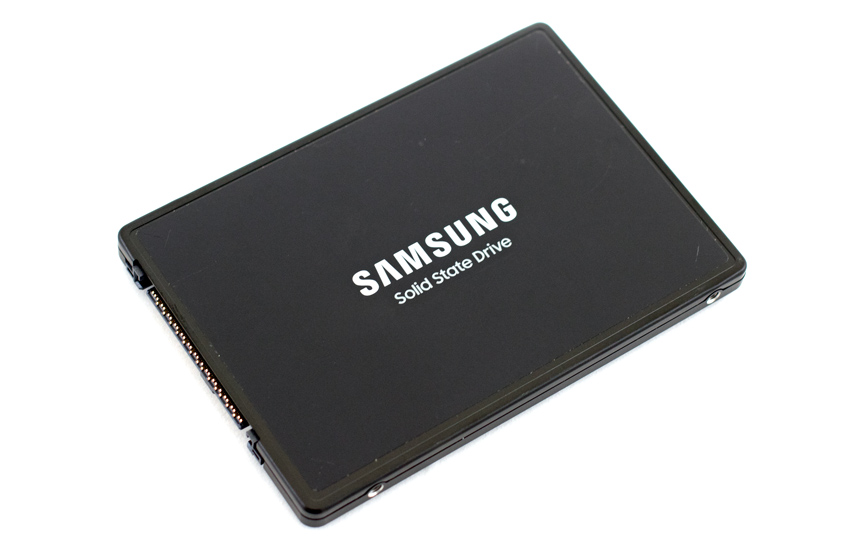 The company has recently refreshed its data center drives recently with the 983 DCT being the drive that aims for high speed and high responsiveness. Samsung states with will achieve this goal through NVMe technology as well as with its Phoenix controller. For the 2.5” version, the company states that the 983 DCT can hit up to 3,400MB/s sequential speeds, and up to 580,000 IOPS for random throughput. 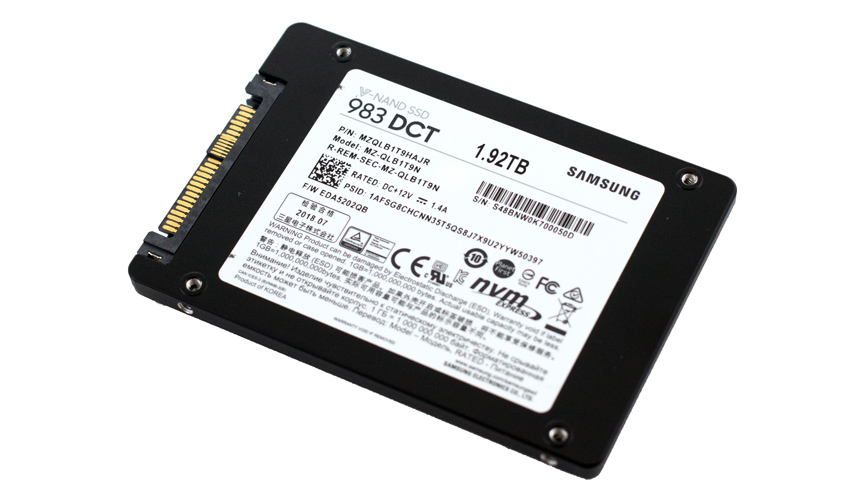 In order to understand the performance characteristics of enterprise storage devices, it is essential to model the infrastructure and the application workloads found in live-production environments. Our benchmarks for the Samsung 983 DCT are therefore the MySQL OLTP performance via SysBench. For our application workloads, each drive will be running 2-4 identically configured VMs. Note: The 1.92TB model wasn't big enough for our SQL application workload, so it wasn't included in this review.

With the Sysbench transactional benchmark, the Samsung 983 DCT (referred to as the Samsung throughout the rest of the performance section) came in last with 6,159.4 TPS. 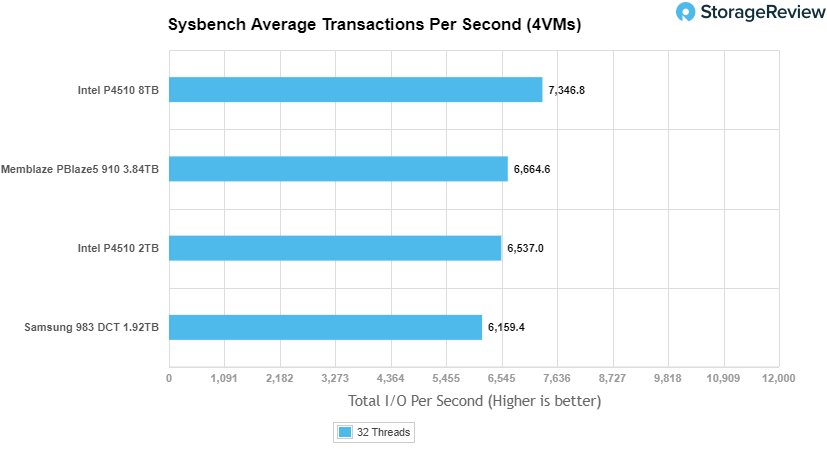 For Sysbench average latency, again the Samsung came in last with 20.8ms. 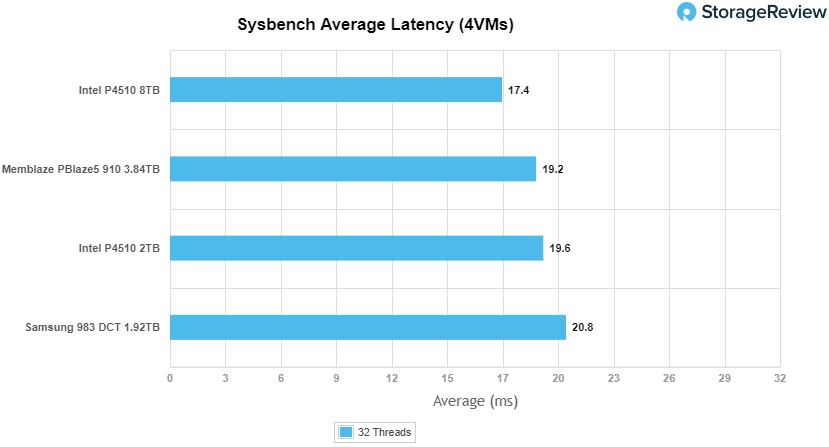 For our worst-case scenario latency (99th percentile) the Samsung stayed in last place with 38.6ms. 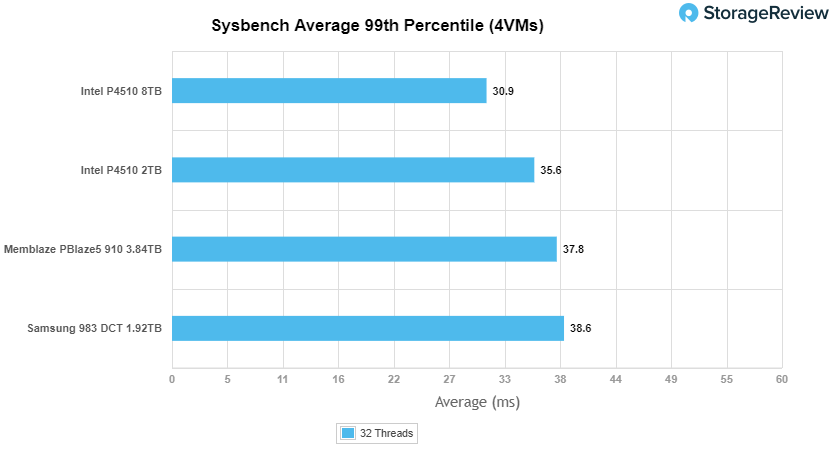 With the Houdini test, the Samsung landed in roughly the middle of our non-Optane drives with 2,634.2 seconds. 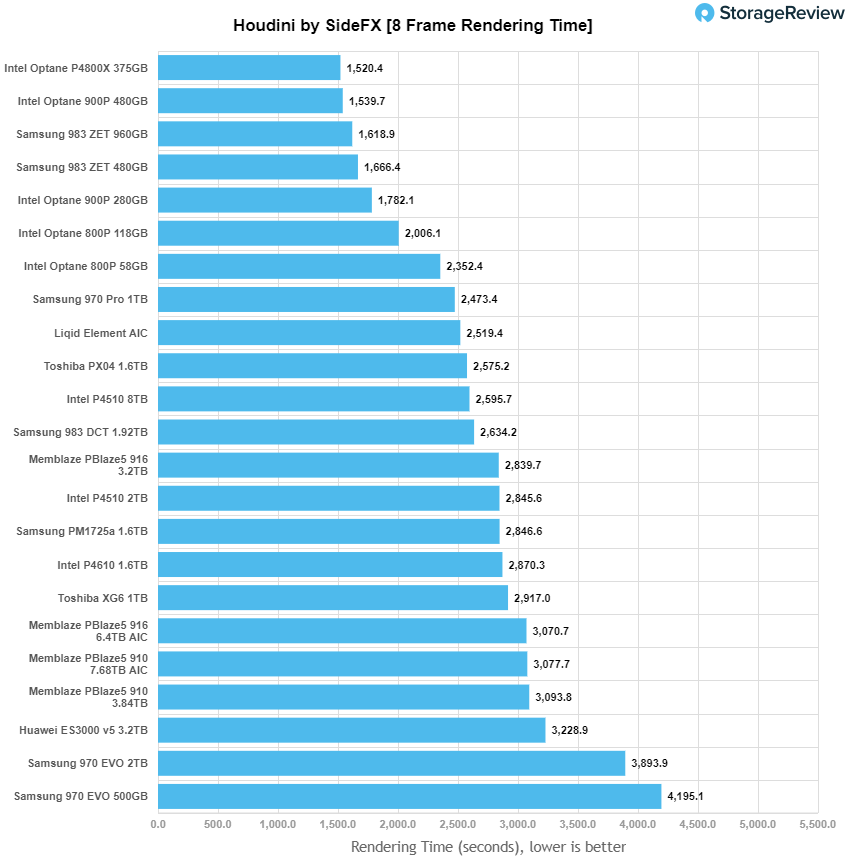 Switching over to sequential work, in our 64K read the Samsung started off with the lowest latency (187.8μs) and maintained a lower latency until about 32K IOPS or 2.1GB/s and peaked with the lowest performance of the group at 36,389 IOPS or 2.27GB/s.

For 64K writes we see yet another poor performance from the Samsung starting at only 67.3μs latency the drive quickly spiked up and peaked at 3,299 IOPS or 206MB/s at a latency of 4.84ms.

Our next batch of benchmarks focus on SQL workloads. For the first benchmark the Samsung started with the lowest latency at 82μs and 21,107 IOPS. The drive maintained the lowest latency until about 150K IOPS and went on to have the second overall peak performance at 210,323 IOPS with 149.5μs latency.

SQL 80-20 saw the drive slip a bit. While still starting with the lowest latency (86.8μs) the drive had the weakest peak performance of about 132K IOPS and 233μs for latency.

Moving onto Oracle Workloads we see the Samsung start off on the wrong foot. Again the drive enters with the lowest latency (82.7μs) but quickly shoots up and peaks at 95,205 IOPS with 418.9μs latency, well behind the other drives.

Next, we move on to our VDI clone test, Full and Linked. For VDI Full Clone Boot, the Samsung started just under 100μs to quickly go over it and land in third with a peak performance of 123,613 IOPS and a latency of 279.4μs.

VDI FC Initial Login had the Samsung start at 3,987 IOPS with 72.7μs. The latency stayed low, in fact it dropped so low that it looks as though it is zero on our charts, until about 12K IOPS where it shoots up rapidly peaking at 15,845 IOPS with a latency of 1.9ms.

With VDI Monday Login, the Samsung stayed in last starting just under 100μs before jumping up to a peak of 17,810 IOPS with a latency of 895μs.

For the VDI Linked Clone (LC) we start once again with the boot test. Here the Samsung showed its strongest performance in our Clone test running neck and neck with the Memblaze PBlaze5 910. However, the Samsung still came in last with a peak performance of 64,503 IOPS with a latency of 248.8μs.

VDI LC Initial Login had the Samsung start just over 100μs and quickly spike up to a peak of 9,959 IOPS with 799.4μs latency, well behind the other two drives.

Finally the VDI LC Monday Login showed that the Samsung continued on with its poor performance starting over 100μs and quickly spiking up to 10,410 IOPS with 1.52ms latency.

The Samsung 983 DCT is the read focused NVMe version of the company’s data center refresh. The 983 DCT comes in two form factors, 2.5” and M.2, as well as two capacities, 960GB and 1.92TB. The 983 DCT is slated as Samsung’s performance data center drive with quoted speeds of up to 3.4GB/s sequential and 580K IOPS random, read in both cases. The drive leverages V-NAND, the NVMe interface, and the company’s Phoenix controller in order to hit these numbers.

While others in the read-intensive category offer 1 DWPD, the Samsung 983 DCT is a bit lighter at just 0.8 DWPD. With that being the case, it wasn't a huge surprise to see the 983 DCT come in below others in this category that offered a small edge in write performance. In our application workload analysis the Samsung 983 DCT came in last in all three Sysbench tests with 6,159.4 TPS, an average latency of 20.8ms, and a worst-case scenario latency of 38.6ms. Houdini saw the drive land roughly in the middle of the traditional NVMe drives with 2,634.2 seconds. Due to its smaller capacity (1.92TB in this review) we were unable to run our SQL Server Application tests.

Moving on to VDBench testing the new for the Samsung 983 DCT we get a clearer view towards how the drive reacts to read and write workloads. The drive had decent read performance in 4K with 592K IOPS and in 64K it hit 2.27GB/s. In both cases the Samsung had the lowest latency longer than the other two drives. For Writes it was a stark contrast. 4K write peaked at a measly 53K IOPS and had a latency of 2.42ms. 64K writes saw only a peak of 206MB/s and a latency of 4.84ms. SQL and Oracle saw an improvement in performance and placement for Samsung with the drive typically having the lowest latency the longest. Highlights include 210K IOPS for SQL, 185K IOPS for SQL 90-10, 160K IOPs for Oracle 90-10, and 131K IOPS for Oracle 80-20. With the exception of the VDI Full Clone Boot test, the Samsung showed overall poor performance in our VDI Clone tests.

As the SSD market looks to further segment products, the Samsung 983 DCT comes in as an NVMe product offering 0.8 DWPD, slightly under competing products that focus on the 1 DWPD mark in their read-intensive positioned drives. As such, it wasn't shocking to see lower write performance from the 983 DCT. Instead the drive carries a larger emphasis on read-performance. Here it was able to offer lower initial latency in small and large-block transfers. Overall the 983 DCT will do good work in read-heavy environments that lean toward a more value-oriented NVMe drive.