The Netgear VueZone is a battery-powered camera system that is wire-free and delivers extremely simple 10 minute setup so that users can check-in on their pets, kids, home deliveries and anything else they need to monitor using a smartphone, PC or Mac. The second-generation camera system offers motion-detection, and recently Netgear has also introduced night vision cameras as well. The system utilizes a base station that connects to a home network using its Ethernet port. The station supports live streaming views of up to two camera, though with upgraded monthly plans stations can support as many as 15 cameras and can also record content and store it on the cloud.

The Netgear VueZone is a battery-powered camera system that is wire-free and delivers extremely simple 10 minute setup so that users can check-in on their pets, kids, home deliveries and anything else they need to monitor using a smartphone, PC or Mac. The second-generation camera system offers motion-detection, and recently Netgear has also introduced night vision cameras as well. The system utilizes a base station that connects to a home network using its Ethernet port. The station supports live streaming views of up to two camera, though with upgraded monthly plans stations can support as many as 15 cameras and can also record content and store it on the cloud. 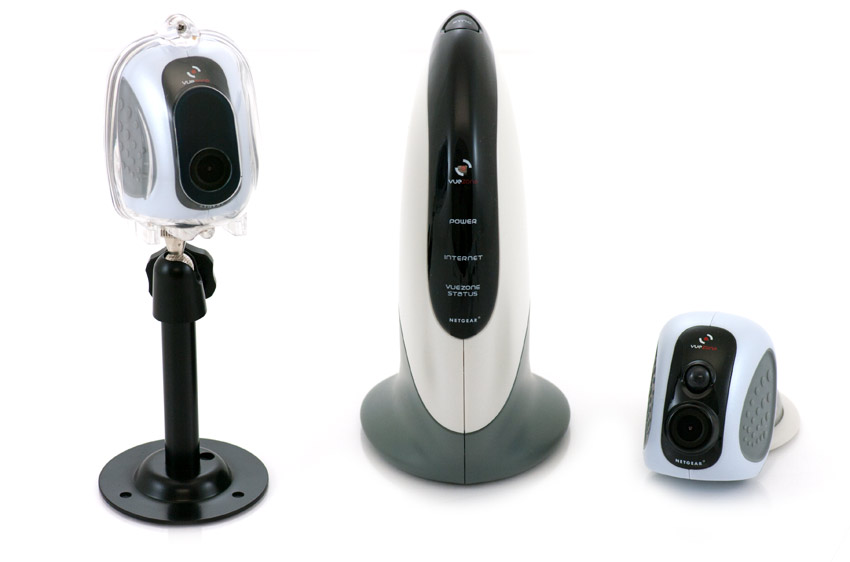 As we alluded to, all Netgear VueZone camera systems come with VueZone Basic service, and for a fee users can also upgrade to Premier or Elite service for additional functionality. The Basic service enables remote viewing of live streaming for up to two cameras’ feeds. Bump up to Premier, and users gain support for up to five cameras as well as digital pan and zoom functions and email alerts when motion is detected. The most robust features come with the Elite service. On top of offering all of Premier’s benefits, it adds support for up to 15 users and 3 different locations (using three base stations). Both Premier and Elite also enable users to record and store content in the cloud with 250MB and 500MB of storage, respectively. There are some additional features which we’ll dive into in the usability section below.

Being wire-free means using batteries. In the case of the VueZone, Netgear rates the photo batteries at up to 6 months of standard usage. That rating factors checking-in to view streaming or recorded content for about 5 minutes daily. VueZone achieves that long-lasting battery life by operating only when users view streams or record content. Netgear also states the camera will have wireless capabilities similar to other home 802.11 wireless devices. Range should be around 300 feet covering most 2,500 square feet homes, though that’ll depend on what obstructions are present.

Getting up and running with VueZone is amazingly simple, which of course is a big part of the value proposition. We deployed a VZSM2720 kit which includes a base station, two cameras and an all-weather camera case and mounting kit, along with a VZCN2060 night vision camera. Putting the cameras to work starts by plugging the base station into an Ethernet jack, then pairing each camera with the base. From there the cameras may be deployed as you wish. We used two of the adhesive magnetic mounts and the all-weather case that can be screwed into place. 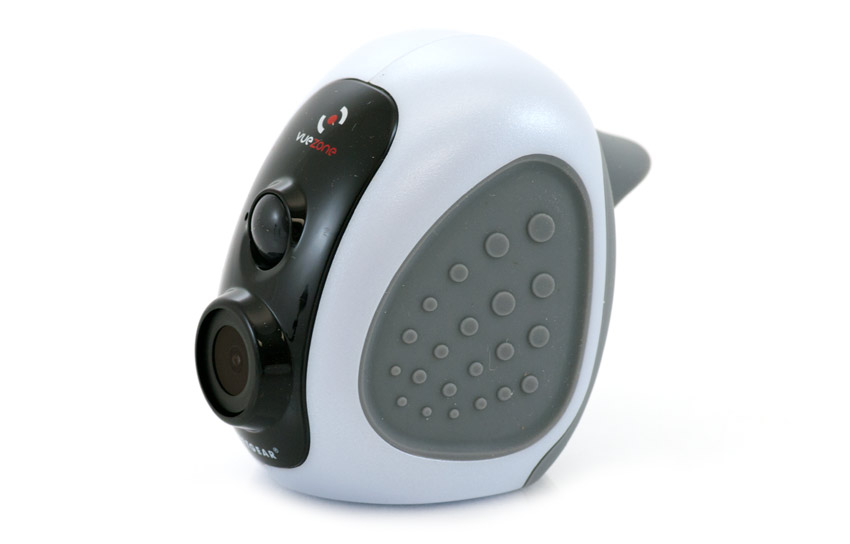 Overall setup took under ten minutes, and that includes fidgeting around with the cameras some to get the views just right. As flexible as the rounded mounting units are, for the perfectionist it takes a little work to get them aligned on a level plane. 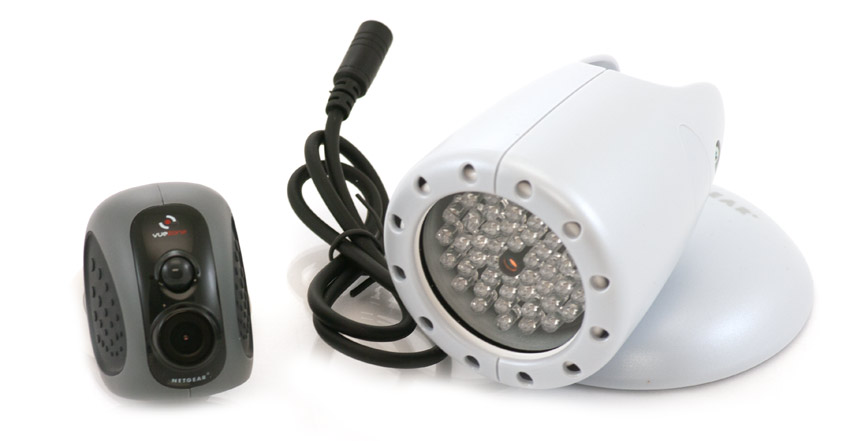 One of the latest enhancements to the system is support for night vision. One of the cameras we deployed for this test was a night vision model paired with its IR light. The need to plug in the light makes deployment a little trickier, but there’s no way around this technical hurdle. The net results are pretty favorable; while users won’t be able to make out faces, the detail is good enough to at least get a pretty good idea as to what’s going on. 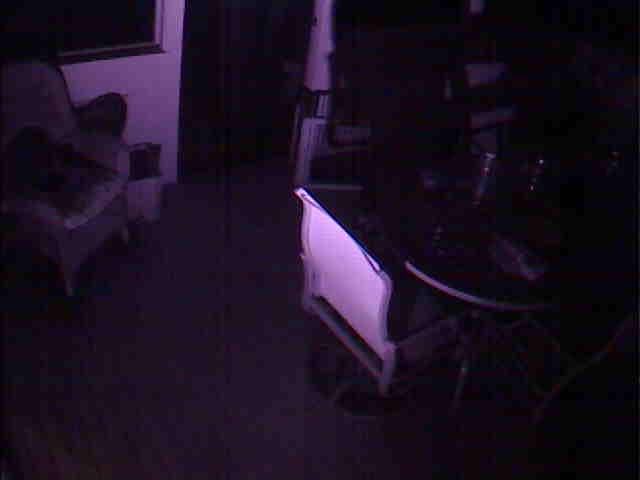 Once the cameras are up and functional, each can be configured with a number of different features. There are two ways to accomplish this – one is via the VueZone online tools and the other is via mobile apps. In our case, we used both an iPad and iPhone to interact with the system in addition to the web tools. While the iOS apps are pretty full-featured, the web interface is substantially easier to use and provides functionality that isn’t part of the iOS app. Some of these features are significant, such as being able to rename cameras and invite users to share the camera feed.

For a user to share the camera feed, the administrator is able to share a link to their camera feed via email. The invited party registers for an account, signs in, and from there they can easily start and stop live feeds, record, etc. The invited party receives the same GUI the administrator views, but unless they already have an account, their functionality is limited to VueZone Basic service. That means that if the person sharing has VueZone Premier with 3 cameras setup, the invited party can only view two as their functionality is limited by Basic service. We also had trouble logging in at the sign in screen with multiple attempts leading to the page continually refreshing and not yielding access.

Below is the default view through the web interface. All three cameras show up in a single pane. From here users can manage the cameras, view the library of saved images or edit settings either globally or for each device.

Each camera has a series of options that can be managed. As noted, the camera name may be edited through the web interface. The system also shares battery life and connectivity strength, along with sharing status, format, motion detection settings and a schedule if one is enabled. The sharing feature is particularly interesting as it opens up the opportunity to patch in a relative, nanny or other relevant third party.

Of course one of the primary benefits of a system like this as opposed to a NAS and cameras is the user doesn’t have to maintain what could become a massive storage repository. The library tab shows all the clips and still shots that have been saved, where they took place, when, and also how big the files are. The system will eventually clean up old files if you exceed quota, but there are tools in place to manage some of that manually by deleting or locking files. The images and video may also be downloaded and saved elsewhere.

Flipping to the iPad app, we get a somewhat disconnected experience when compared to the web interface. Much of the iOS app feels a little underwhelming, as if it were put together as an afterthought. The problem of course is that many users of VueZone will want to use their mobile device to check in on the home. For that, the apps are probably fine, but if you want to do much more advanced management, things get a bit more difficult, confusing or, in some cases, impossible.

The app starts in a live view mode where the cameras can be tiled which is great if you have several of them, or the can be shown as larger views that are stacked on top of each other. The views aren’t immediately live though, the stills displayed when launching the app are recent, but there’s no indication on when they were last updated. Users have to dive into each camera manually to get a live view of what’s going on. 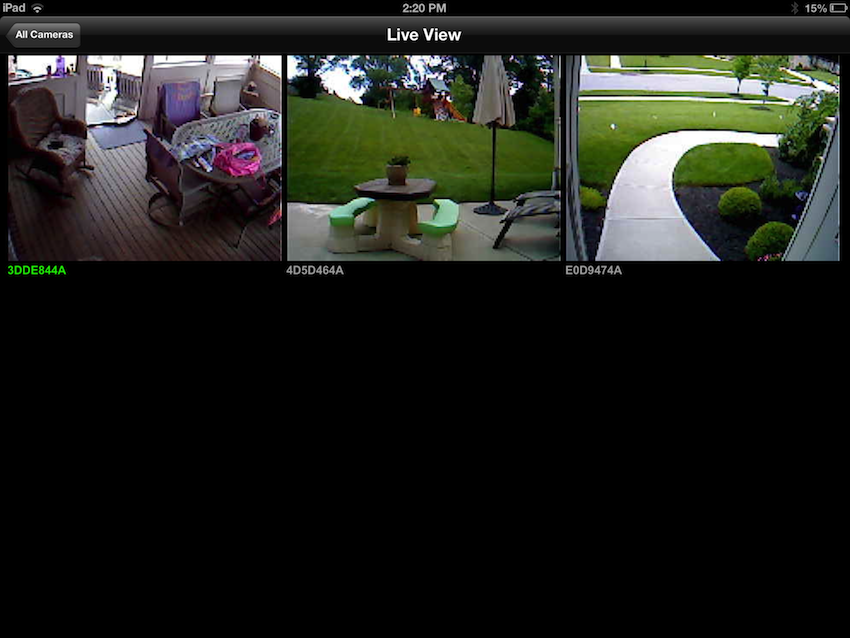 The live view screen is nicely appointed. Below is a front door mount that easily covers a wide viewing area. From here, users can manually record video, take a snap-shot or set a manual digital zoom area of 2X. 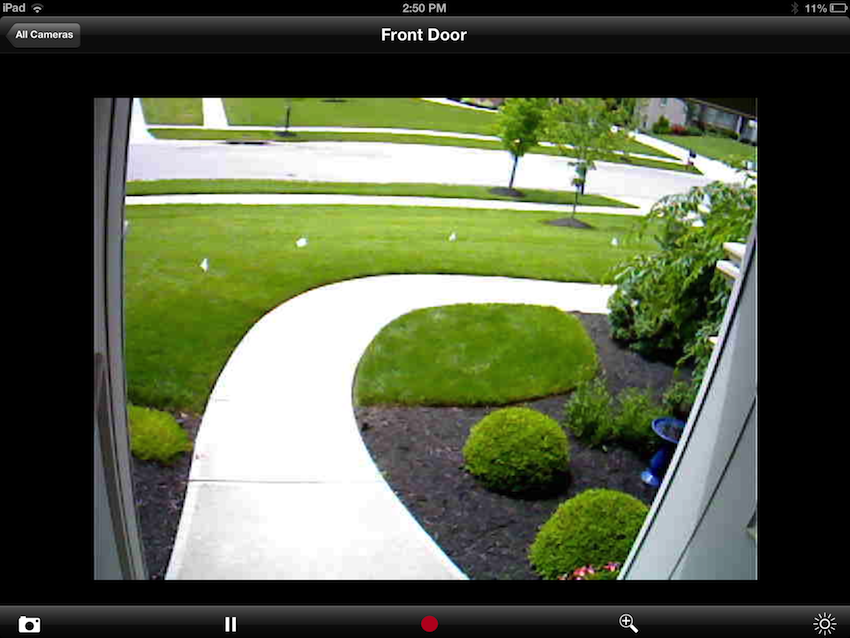 Each camera can also be set up to record events as motion is detected. The cameras can record still shots or videos of up to 60 seconds in length. The system can also be configured to alert you via email or iOS alerts as motion is detected. It’s easy to make a mistake of covering too much ground with the camera though, and then you’ll be getting an inbox full of videos like dump trucks cruising by. We found video to be more useful than the still shots in most cases, as the stills were often too slow in terms of capture speed. We often captured a delivery person’s head for instance as he bent over to set down a package, rather than his approach to the door. 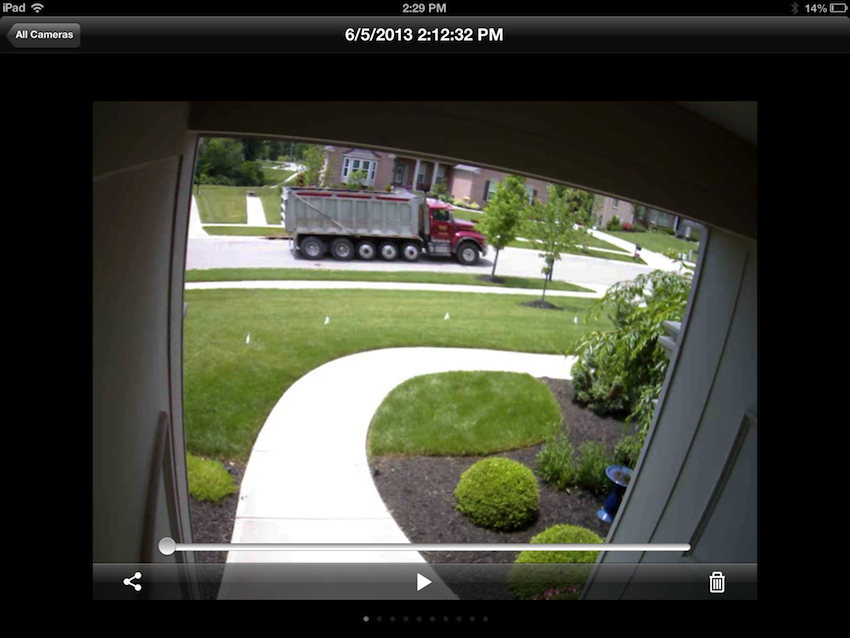 The settings screen for iOS is where Netgear could invest and make many improvements. As noted earlier, some of the management options online do not exist in the iOS app, like managing sharing with other users, scheduling recordings and renaming cameras. While some options are clear in what they do, many others are not, leaving users to guess at the intention. Sensitivity is one of these options. There’s a sliding scale but no identification as to what this scale means or what the end result is for the user. Perhaps if it were slid one way or another, we’d capture more UPS people in the still shots, rather than their caps, but there’s no way of knowing for sure without just guessing. Same goes for the sun/moon setting. If a camera gets morning sun and evening shade, which option is best? Again there’s no guide for the user to optimize the camera settings. 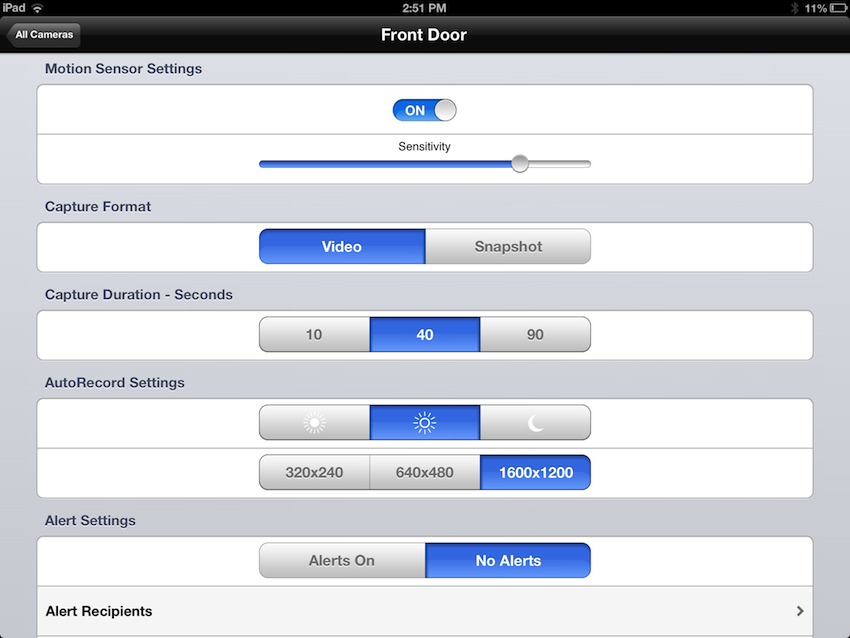 The Netgear VueZone camera system does its intended job well; it gives users a very easy way of setting up video surveillance for their homes or possibly even a small office. Of course there are more robust options in the market like a NAS and higher end video cameras, and Netgear offers those kinds of solutions as well. However, the real benefit of VueZone is the simplicity and cloud-based storage. Going from unboxing to live video streaming and capture on your mobile device or through a web browser takes just a few minutes, which is pretty impressive, and with a starting street price of $200 for a base station and two cameras, the system is pretty cost-effective as well if you just need a small system.

We didn’t run into any issues using the system, and if we’re going to complain about much it’s that some of the settings have little guidance as to what they actually do, like sensitivity, and the iOS app is just average. If Netgear invests a little more into the UI and overall usability of the iOS apps, they could be very nice. As they are now, they’re perfectly usable, just not as refined as the web interface, and they lack functionality that exists on the web site.

The new night vision camera is a nice addition, and the variety of mounting options and accessories like all-weather kits makes deploying the cameras in a wide variety of environments pretty easy. With decent wireless range, it’s easy to mount a camera at the front door, or perhaps somewhere more hidden like in a tree with the all-weather kit. The flexibility of the system is very impressive as a result.

The Netgear VueZone camera system is quick to set up, is extremely flexible and requires no on premise storage. For those wanting a lightweight solution for keeping tabs on their home while on the go, the VueZone gets the job done with ease.