The SanDisk Extreme II, announced today, is a 2.5″ 7mm form factor performance SSD with capacities that range up to 480GB. The Extreme II is naturally the second iteration in the performance SSD line, and SanDisk has brought several changes to market with the new Extreme II. One of the most significant changes is that SanDisk has dropped the SandForce controller, moving to Marvell so they can provision the Extreme II with their own in-house developed firmware. SanDisk has also replaced the 24nm MLC NAND found in the original Extreme with 19nm MLC NAND, keeping in line with NAND die shrinks. Another important change comes in the form factor; the Extreme II shrinks to 7mm down from 9.5mm to meet the growing demand for drives that fit space-constrained applications. Lastly, SanDisk is now offering an additional two years for their warranty which now stands at 5 years.

The SanDisk Extreme II, announced today, is a 2.5″ 7mm form factor performance SSD with capacities that range up to 480GB. The Extreme II is naturally the second iteration in the performance SSD line, and SanDisk has brought several changes to market with the new Extreme II. One of the most significant changes is that SanDisk has dropped the SandForce controller, moving to Marvell so they can provision the Extreme II with their own in-house developed firmware. SanDisk has also replaced the 24nm MLC NAND found in the original Extreme with 19nm MLC NAND, keeping in line with NAND die shrinks. Another important change comes in the form factor; the Extreme II shrinks to 7mm down from 9.5mm to meet the growing demand for drives that fit space-constrained applications. Lastly, SanDisk is now offering an additional two years for their warranty which now stands at 5 years. 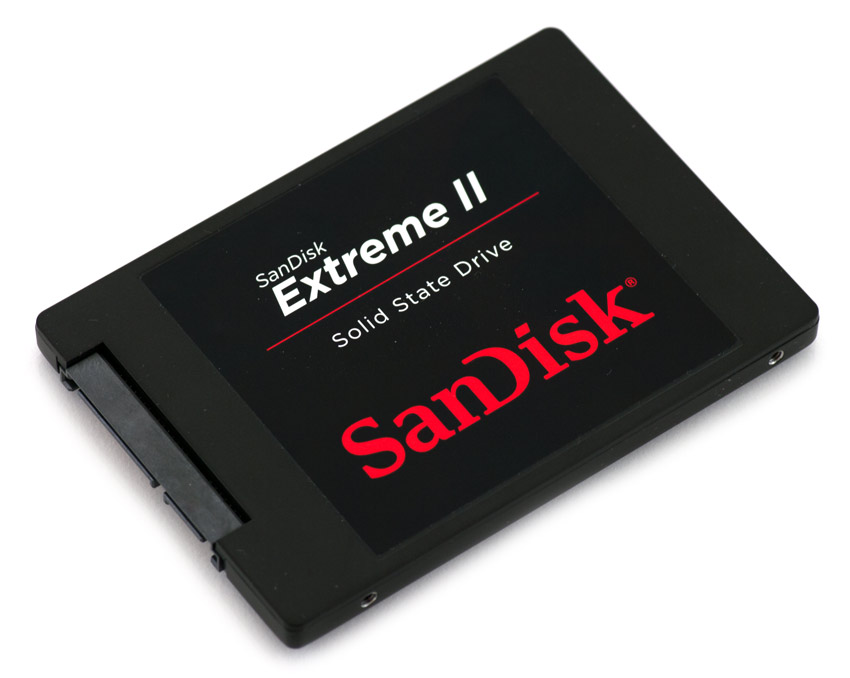 Of all these updates, the move away from SandForce is certainly the one that stands out the most. The switch from SandForce to Marvell, LAMD and other controllers is becoming increasingly popular even though that generally means giving up some degree of performance. SSD vendors are having a more difficult time differentiating, especially on SandForce-based platforms where the firmware is largely static, so going to an alternate controller where the vendors can infuse some degree of control over the firmware gives them more of an opportunity to not only stand out, but to support their drives. As a result Marvell is taking more market share, at least among SSD vendors that lack proprietary controller technology.

Being SanDisk’s highest performing SSD, the Extreme II has a heavy focus on delivering solid transfer rates and IOPS as well as high-end endurance. With support for TRIM and SMART and a MTBF of 2 million hours, the Extreme II features plenty of features for valuable data. SanDisk also rates the Extreme II’s endurance at greater than 80TB written over the life of the warranty – a spec in which they take pride as they rate the drive using a 4k worst-case scenario workload. The Extreme II also provides up to 550 MB/s reads, 510MB/s writes and random read throughput at up to 95,000 IOPS.

Similar to its predecessor, the design of the SanDisk Extreme II features a smooth, all-black surface with two prominent labels. What differentiates the two drives is that the newer Extreme now comes in a thin 7mm form factor. Otherwise, the drives are very similar. On top and bottom, the labels cover most of the SSD; the top label features branding, while the bottom provides drive-specific information. 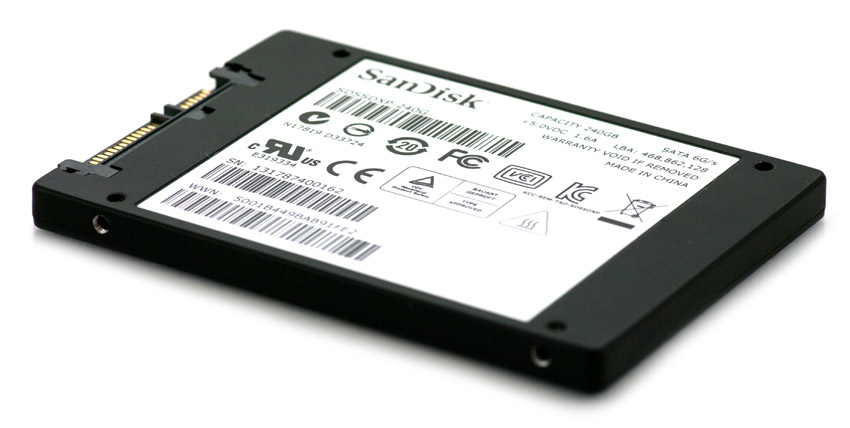 Other notable features include that the sides enable mounting via four screw holes, two per side. The front of the Extreme II looks slightly different from the original because its slimmer size; dropping off 2.5mm is actually quite obvious by comparison. 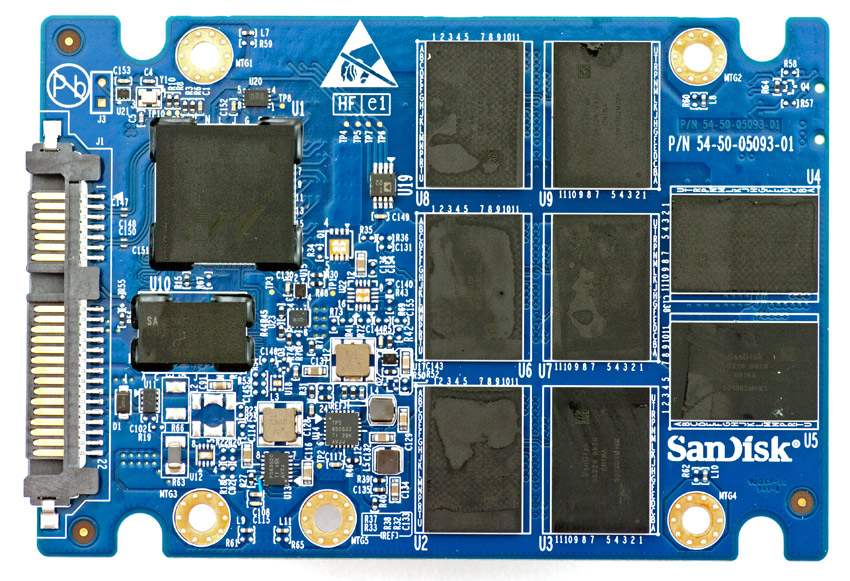 Inside, the SanDisk Extreme II leverages a Marvell 88SS9187 controller with Samsung DRAM as buffer 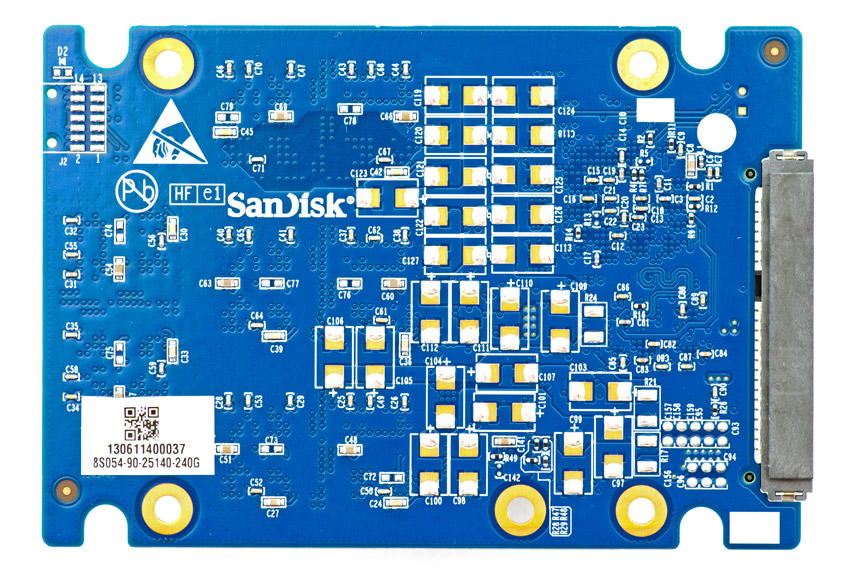 The SanDisk Extreme II utilizes SanDisk 19nm MLC NAND. While not utilized in the consumer version of the Extreme II, it appears that SanDisk is ramping up for a light-enterprise version which would share the same board and come equipped with capacitors for power-fail protection soldered to the pads shown above.

In our first benchmark where we test straight line sequential performance, we measured speeds of 511MB/s read and 477MB/s write. These figures placed the SanDisk Extreme II 240GB SSD at the front of the group for read activity, and just below the Samsung SSD 840 Pro and OCZ Vector for write activity.

Our next test maintains the 2MB transfer size, but this time we are measuring random transfer speeds. The SanDisk Extreme II 240GB fell to the bottom of the group in read activity at 382MB/s, but maintained a respectable write activity mark near the middle of the group at 450MB/s.

In our next test, we measure low queue depth random 4k read and write performance. Here, the SanDisk Extreme II 240GB placed near the top of the group with read activity figures at 32.4MB/s, marginally lower than the Samsung 840 Pro, though its write activity at 68.74MB/s was near the middle of the group.

Our next test scales the queue depth between 1 and 64, showing how well the drive reacts to an increased workload. In a random 4k read setting, the SanDisk Extreme II 240GB scaled towards the top of the group, peaking around 95,000 IOPS. 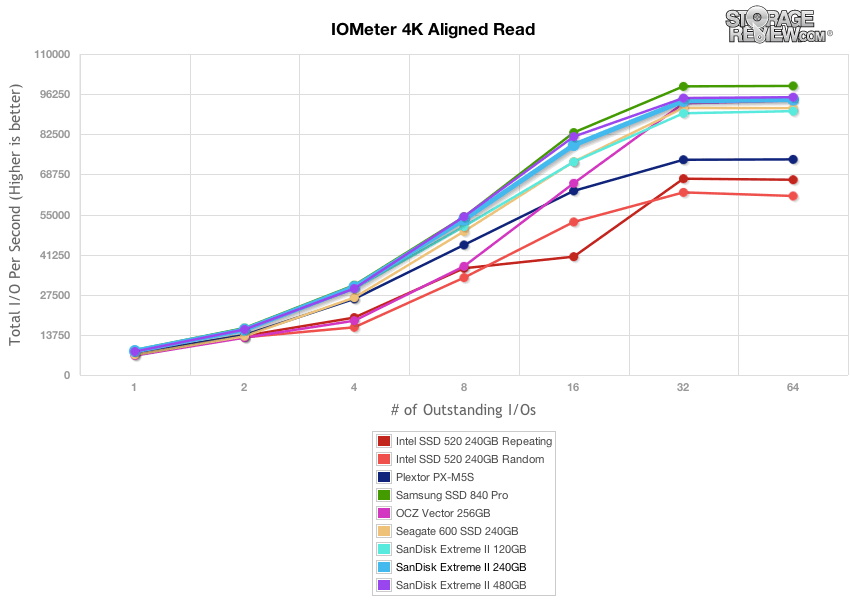 Evaluating random 4k write performance, the SanDisk Extreme II 240GB placed in the middle of the group throughout the queue depths with its greatest performance at about 76,500 IOPS. 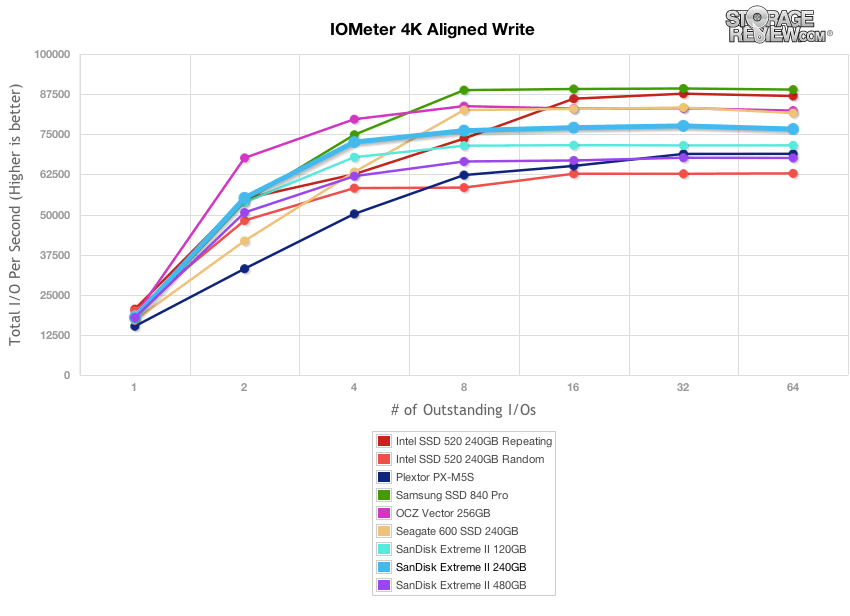 Expanding our QD1 4k test, we look at write latency of each SSD. Lower numbers are better, since it means less wait time for activity to process. Max latency is also important, although that number can change as the NAND experiences wear over time. We measured an average latency of 0.0563ms from the SanDisk Extreme II 240GB, which was near the middle of the group. Its peak latency performance however was best-in-class. 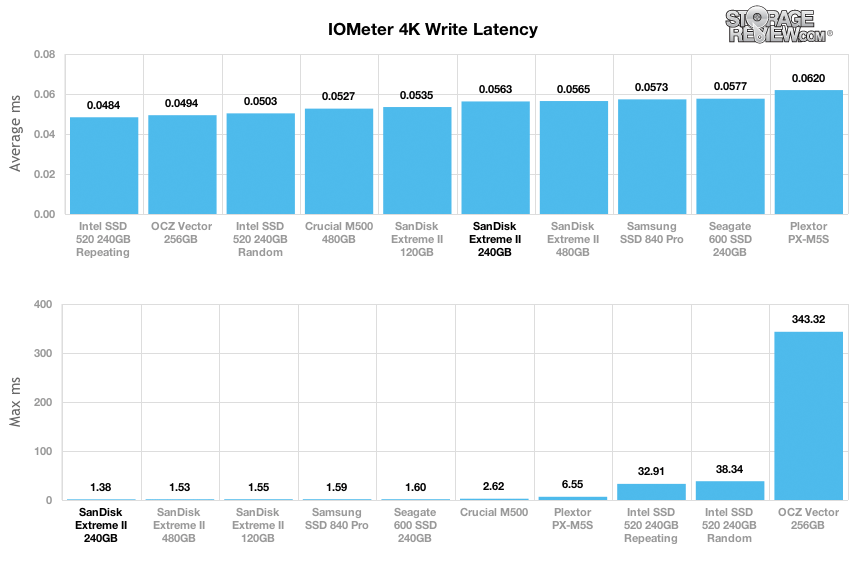 The first profile is our database test with a 67% read and 33% write workload mix primarily centered on 8k transfer sizes. In this test, the SanDisk Extreme II 240GB performed near the bottom middle of the group. 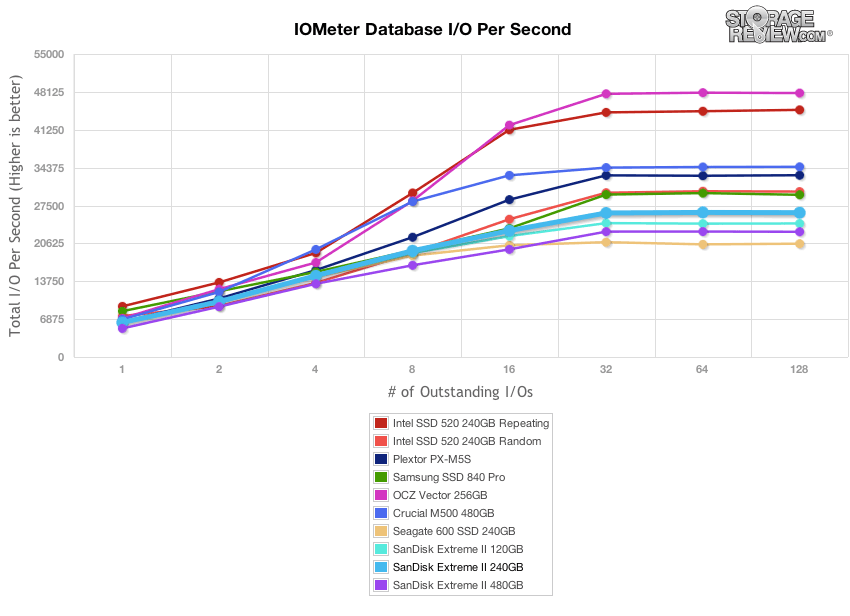 The next test looks at a file server profile with an 80% read and 20% write workload spread out over multiple transfer sizes ranging from 512-byte to 64KB. In this testing, the SanDisk Extreme II 240GB placed near the bottom of the group. 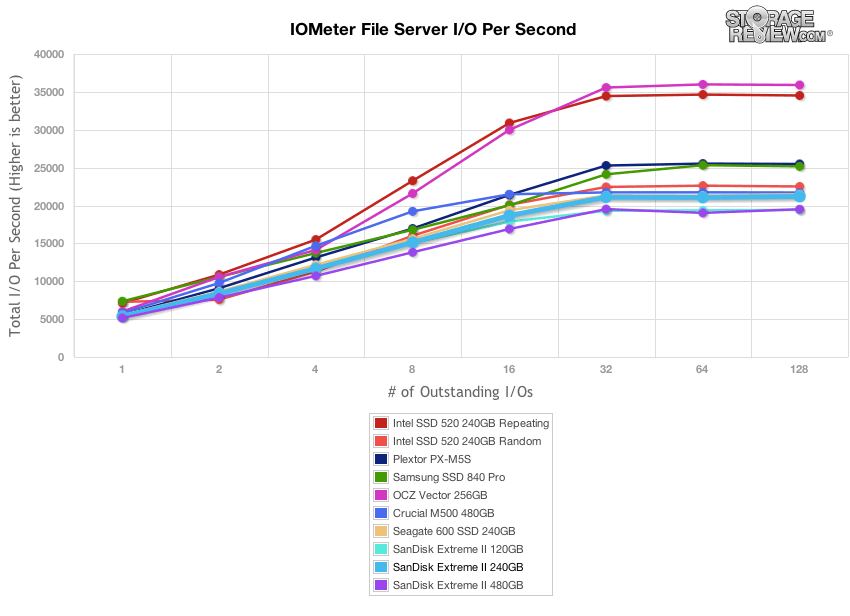 Our web server profile is read-only with a spread of transfer sizes from 512-byte to 512KB. Here, the SanDisk Extreme II 240GB placed in the middle of the group. 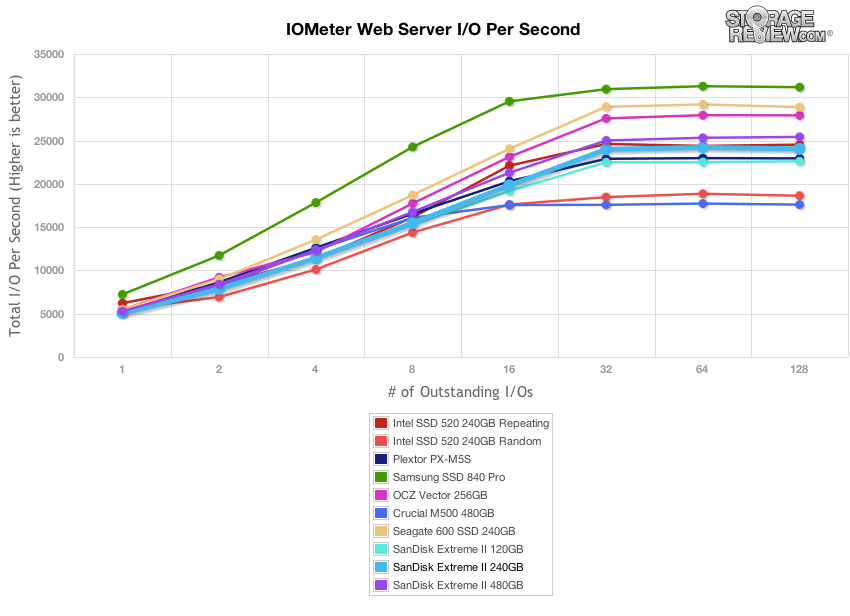 The last profile looks at workstation activity, with a 20% write and 80% read mixture using 8k transfers. The SanDisk Extreme II 240GB performed near the lower end of the group here. 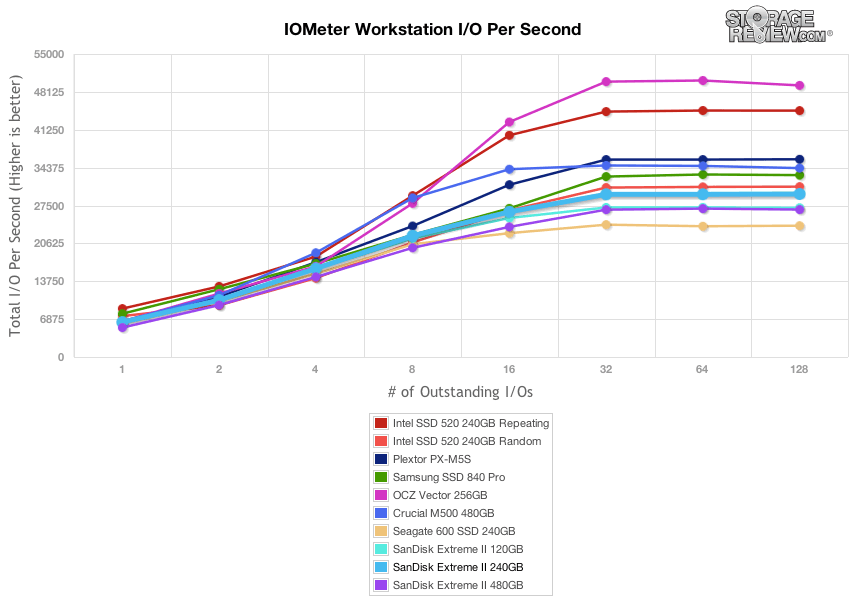 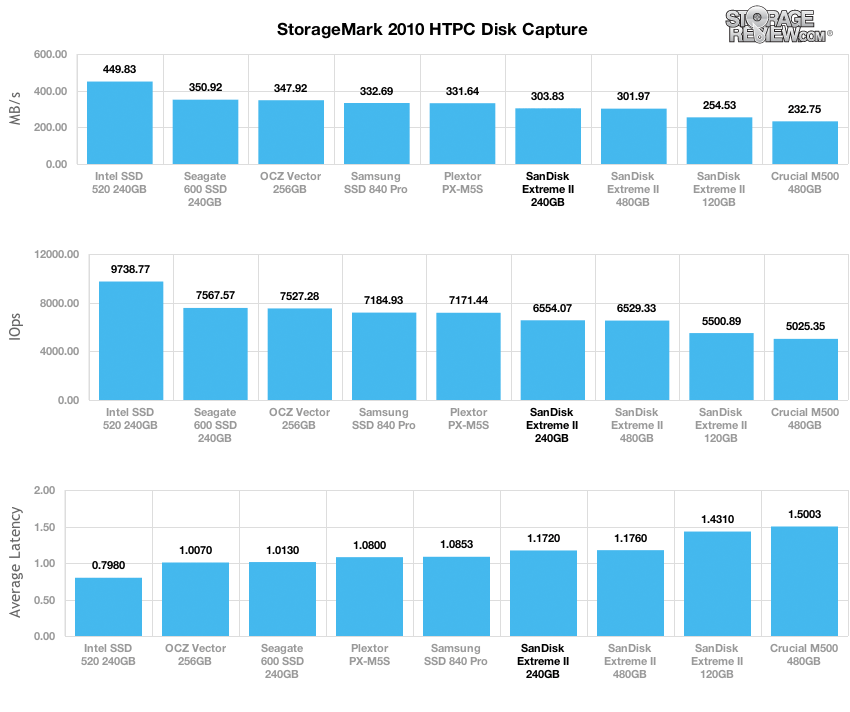 In our HTPC trace, the SanDisk Extreme II 240GB had an average transfer speed towards the lower middle at 304MB/s as well as IOPS near 6,554. 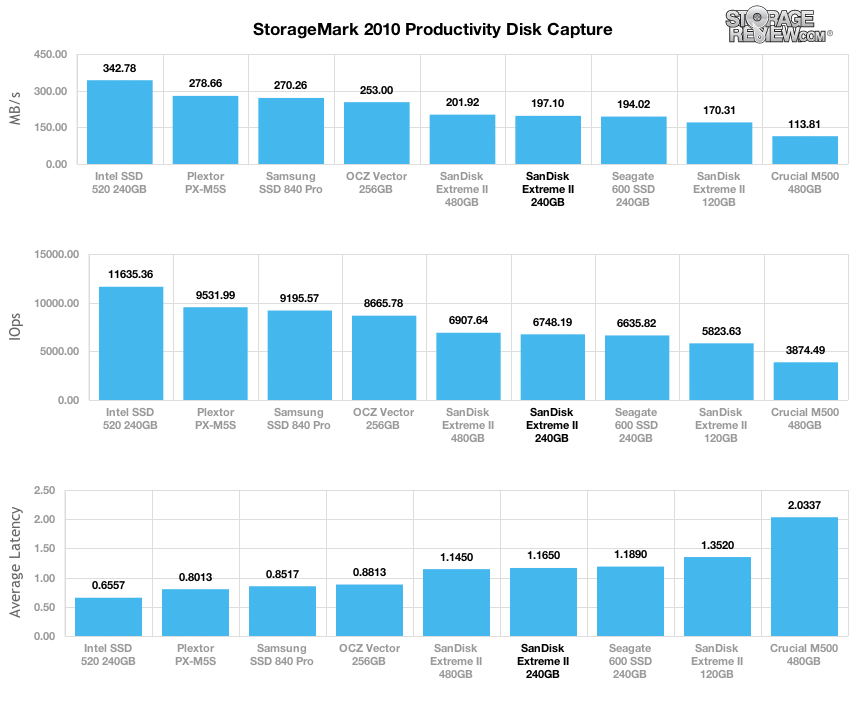 In our productivity trace, the SanDisk Extreme II 240GB tested near the bottom middle of the group at a 197MB/s average speed and 6,748 IOPS. 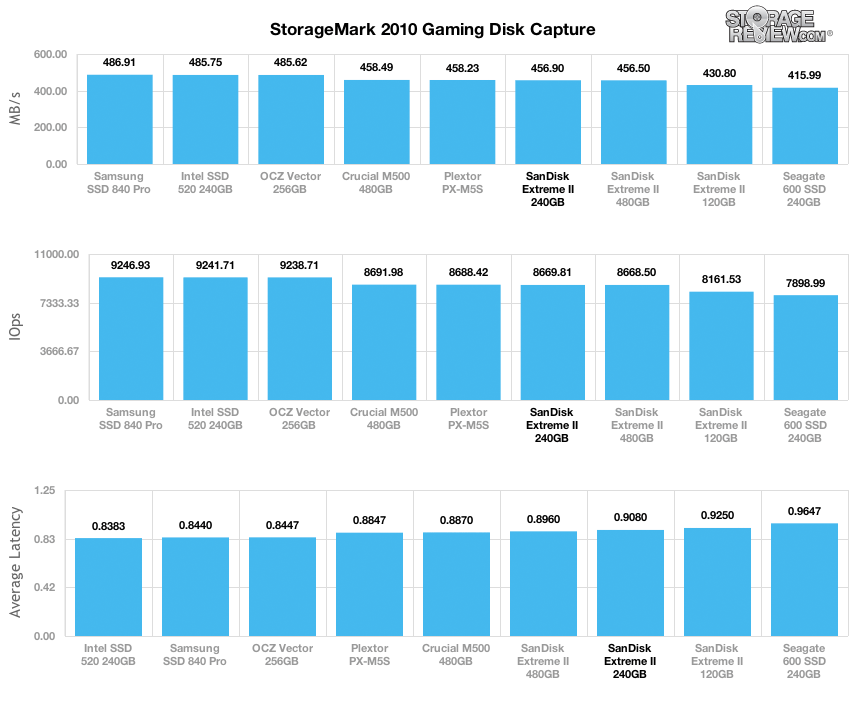 In our read-heavy Gaming trace, the SanDisk Extreme II 240GB delivered a middle of the group 457MB/s average speed and 8,670 IOPS.

The SanDisk Extreme II 240GB included datasheet figures stating that the drive should consume MAX Read/Write power at 2.9W/3.4W for 120GB, 3.5W/5W for 240GB and 3.2W/5W for 480GB. These figures were near spot-on. The drives actually consumed even less power in read activity, and for write activity just the 120GB exceeded the mark, and only marginally – the 240GB and 480GB consumed less power than their rating.

The rest of the figures (Random Read, Idle and Startup) all show low consumption as well.

The SanDisk Extreme II SSD is a 2.5″ form factor, 7mm z-height drive that features 19nm MLC NAND. The drive is designed for enthusiast users interested in gaming, content creation and other high IOPS applications. For the Extreme II, SanDisk diverged from their previous designs that were SandForce-powered SSDs and implemented a Marvell controller instead. This enables SanDisk to utilize in-house firmware for greater control over performance and to enable easier updates. As for endurance figures, the Extreme II provides a minimum of 80TB written over its five-year warranty life and a MTBF of 2 million hours.

When it came to performance, the SanDisk Extreme II SSD faced stiff competition from comparables in the high-performance client SSD market. Still, in our synthetic benchmarks, the Extreme II shined in 2MB sequential testing, 4k Random Read and 4k aligned read activity. Additionally, it provided ultra-low 4k peak latency. However, the Extreme II wasn’t able to maintain that momentum throughout all of the synthetic testing. The SSD fell to bottom half of the group or lower in 2MB random read activity as well as all of the server profiles. The server profiles are read-intensive, weighted with read activity at 2/3 or greater. Then came our real-world testing profiles. In these scenarios, the SanDisk Extreme II 240GB was routinely bested by the competition, generally falling to the back of the group.

While SanDisk clearly gives up some top-line performance by moving off of the SandForce controller, they gain an opportunity to use in-house firmware, which aids in their ability to support the drive. Given the lengthy five year warranty and the impressive endurance numbers quoted, being able to bring more of the drive in-house is clearly significant to SanDisk. With the NAND already part of the family via the Toshiba/SanDisk partnership, the Extreme II is as much owned by SanDisk as possible given that they don’t own SSD controller technology. While it’s hard to measure here, such comprehensive SSD solutions historically offer a better user experience via stability and compatibility. While the enthusiast market will still gravitate toward whatever is fastest, SanDisk is betting the bulk of the market would rather have an affordable drive that works predictably for the five year warranty.

The SanDisk Extreme II is a performance-driven SSD that provides high endurance and a long warranty along with performance that for the most part matches that of comparable SSDs.