A couple of weeks ago we received and review the 1TB version of Crucial’s new MX500 SSD. As we stated then, this new 2.5” drive is being marketed as a drop in replacement for HDDs or a low cost flash option for OEMs. The drive was released in 250GB, 500GB, 1TB, and 2TB capacities and both 2.5” an M.2 form factors (though the M.2 tops out at 1TB).

A couple of weeks ago we received and review the 1TB version of Crucial’s new MX500 SSD. As we stated then, this new 2.5” drive is being marketed as a drop in replacement for HDDs or a low cost flash option for OEMs. The drive was released in 250GB, 500GB, 1TB, and 2TB capacities and both 2.5” an M.2 form factors (though the M.2 tops out at 1TB). 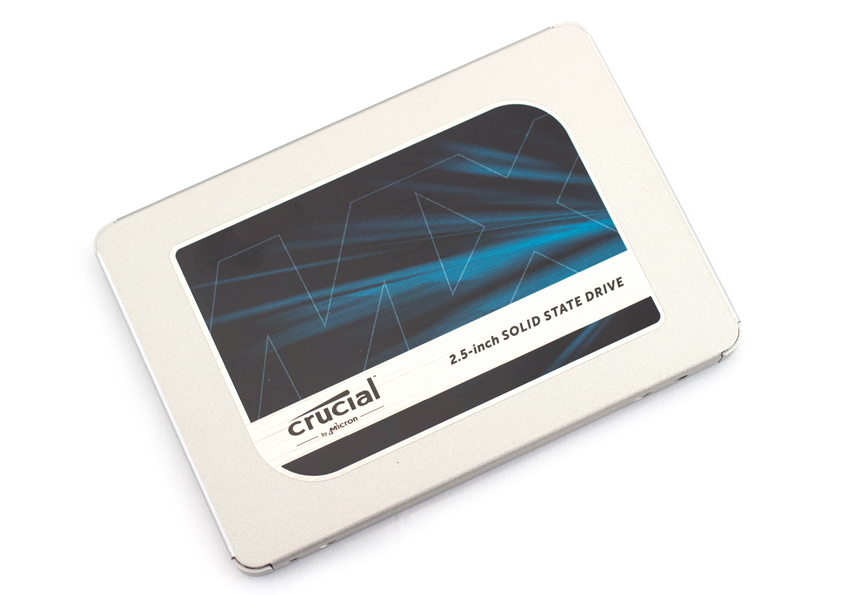 For this review we will be looking at the 500GB version of the drive. For all intents and purposes, this version has the same features of the previously reviewed drive (for that information, follow this link). However we aren’t just running the drive through the same battery of tests we typically do. In this review we are rolling out all new benchmarks for SSD moving forward.

The MX500 500GB, from the outside, looks exactly the same as the rest of the series and has a similar design to most of Crucial’s SSD products. The SSD is a SATA-interface drive in a 2.5” form factor with an aluminum case. The top has branding and the bottom of the drive has a sticker with information such as capacity and model number. 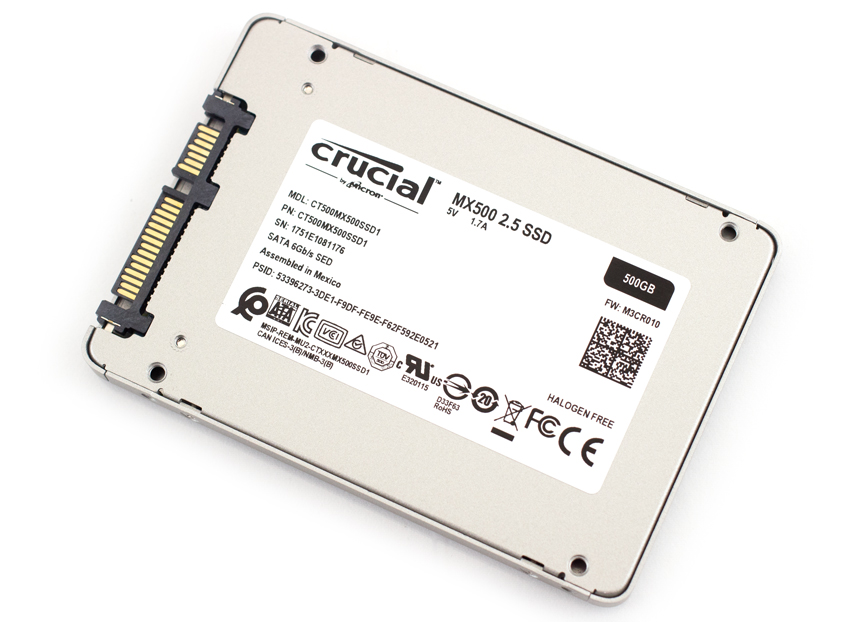 Opening the drive up, we see a Silicon Motion controller and Micron DRAM and NAND packs. 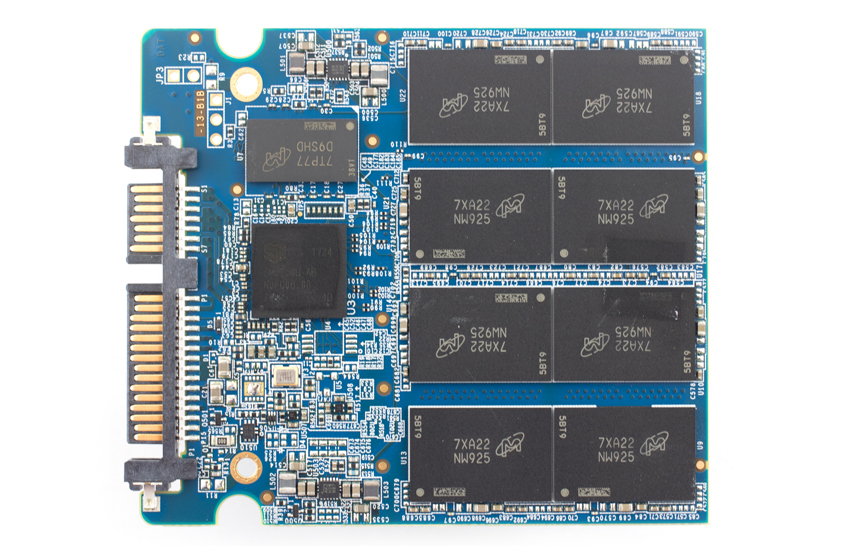 StorageReview has rolled out an updated assortment of tests for end user SSDs, which are designed to look more at IOPS or throughput in relationship to latency. These benchmarks have been honed at a much larger scale for enterprise drives; for client SSDs we decrease the loads to more common workload sizes. Testing is done within VMware ESXi 6.5 with a 20GB test footprint, comprised of two 10GB vdisks that are placed onto a datastore presented off the SSD under load. The test platform leveraged in these tests is a Dell PowerEdge R740xd server. We measure performance through a Dell H730P RAID card inside this server, although with the card set in HBA mode only to disable the impact of RAID card cache. The methodology used better reflects end-user workflow with the consistency, scalability and flexibility testing within a virtualized server offers.

Looking at peak read performance, the MX500 was able to show sub-millisecond latency until it hit about 66K IOPS. The MX500 peaked at just under 72K IOPS with a latency of 3.52ms. Overall this puts it third in sub-millisecond performance (with the Samsung 850 EVO 1TB taking the top spot hitting just over 72K IOPS in under 1ms of latency).

Switching over to peak write performance, the MX500 had sub-millisecond latency performance up until around 56K IOPS. The drive peaked at 62,288 IOPS with 2.03ms putting it second to the Samsung 850 EVO 1TB.

Going to sequential 64K peak read, here the MX500 was able to offer sub-millisecond latency up until about 5,200 IOPS or just under 330MB/s bandwidth. The drive peaked at 7,370 IOPS at 4.36ms latency and a peak bandwidth of 464.52MB/s. This placed the drive fourth overall.

Next we look at VDI including Boot, Initial Login, Monday Login, Patch Update, and Tuesday Steady. For the VDI Boot, the MX500 ran at the front of the pack, neck and neck with the 1TB model. The drive had sub-millisecond latency performance until just shy of 27K IOPS. The drive peaked at 28,940 IOPS with 2.23ms latency. The 1TB model had slightly better performance.

With VDI Initial Login we see the MX500 slip up for the first time. The sub-millisecond performance only lasted until about 7,800 IOPS with the drive peaking at 13,150 IOPS and 4.31ms latency. This places it second to last.

VDI Monday login gave us similar placement for the MX500 500GB. The drive made it to roughly 7,500 IOPS with less than 1ms of latency and peaked at 12,498 IOPS with 2.6ms. It should be noted that the 1TB version of the MX500 was the best performer in terms of sub-millisecond latency.

For the VDI Patch Update the majority of the drives only had sub-millisecond performance into the low 100s of IOPS. The MX500 500GB drive had several latency spikes and peaked at 5,071 IOPS with 945ms for latency making it the poorest performer in this benchmark.

With VDI Tuesday Steady, the MX500 500GB SSD once again trailed the rest of the pack. The drive had sub-millisecond performance up to about 6,000 IOPS and peaked at 12,884 IOPS with 3.78ms latency.

Crucial’s MX500 line of SSDs are designed as drop in replacements for HDD or cost-effective flash for OEMs. The MX500 line comes in capacity ranging form 250GB to 2TB with in 2.5” form factor and 250GB to 1TB in M.2 form factor. The drive comes with everything one would need to swap out an aging hard drive with.

From this review moving forward we will begin leveraging our VDBench test for SSDs both consumer and enterprise. Looking at the tests the MX500 500GB was able to bring some strong performance in some of the benchmarks coming in the top three spots in a few of the tests. In our 4k random benchmark the drive had sub-millisecond performance up to 56K IOPS write and 72K IOPS read. In our 64K sequential benchmarks the drive had sub-millisecond performance up to 5,200 IOPS read and write with bandwidths of 464.52MB/s and 407.25MB/s respectively. Going to our VDI tests the MX500 started off the testing strong in the Boot benchmark before falling off in subsequent tests.

Crucial’s MX500 again shows that it can bring a descent amount of performance and certainly more than an HDD that it is designed to replace. While there are faster and more powerful options on the market, the MX500 500GB can be picked up for roughly $140 and dropped in to replace an HDD giving on older computer new life.

The Crucial MX500 SSD provides good performance and a good price for a drop in and replacement for an aging HDD.