NVELO Drives Storage Caching to the Masses with Dataplex

We’ve spent a lot of time talking about caching this week, from our overview of caching techniques to reviews of the OCZ Synapse and RevoDrive Hybrid. In both cases with the OCZ products, their caching magic is handled by NVELO’s Dataplex software. Dataplex offers behavior-based algorithms to bridge the gap between a high-capacity hard drive or drive array and a high-performance SSD. As we’ve seen in the recent reviews, NVELO has done a brilliant job making the caching not only work in a near seamless way, but they’ve actually delivered on the promise of SSD speeds and hard drive capacity…without a big price tag.

We’ve spent a lot of time talking about caching this week, from our overview of caching techniques to reviews of the OCZ Synapse and RevoDrive Hybrid. In both cases with the OCZ products, their caching magic is handled by NVELO’s Dataplex software. Dataplex offers behavior-based algorithms to bridge the gap between a high-capacity hard drive or drive array and a high-performance SSD. As we’ve seen in the recent reviews, NVELO has done a brilliant job making the caching not only work in a near seamless way, but they’ve actually delivered on the promise of SSD speeds and hard drive capacity…without a big price tag.

In it’s simplest form, the Dataplex software keeps the most commonly accessed hot data on the SSD and the lesser accessed cold data on the hard drive. That’s more or less the definition of any caching solution. What makes Dataplex unique is that it works extraordinarily well at the software level and isn’t terribly expensive for the client space. The software itself is also drive agnostic and doesn’t require any hardware like a RAID card. In its current form, Dataplex is available exclusively through OCZ’s two hybrid offerings, but NVELO certainly has their sights set on growing their business through other distribution agreements in the client computing space and eventually they have their sights set on going head-to-head with the likes of LSI’s CacheCade in the enterprise space. 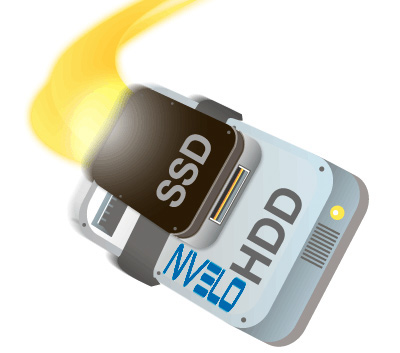 When working with Dataplex, the software install process pairs the SSD with the storage volume. Once this process is complete, the SSD disappears from view. It’s still there of course, but it’s now caching and will remain essentially under the covers for the duration of its use. While we mentioned above the simple example of hot and cold data, NVELO’s solution of course works at a much lower level. Files that are used frequently; say files required to boot the OS, open Outlook and start Photoshop, earn a higher priority in the cache, making it nearly impossible for them to get kicked out. It’s important to recognize that it’s not a simple inventory management system where it’s first in, last out or some other derivation. Dataplex fully customizes the experience or each user, based on their specific activities.

So after using Dataplex for a few weeks and getting into a good caching groove, you install and start regularly playing Call of Duty: Modern Warfare 3. The first game load will be hitting the hard drive. But as these things go, the game gets addicting and you find yourself playing it more and more. Odds are the second time it loads faster than the first and by the third time you’re loading at SSD speeds. While we’ve seen some users and even other reviewers complain about the time it takes for the caching algorithm to work, if you load a certain application hundreds or thousands of times in a drive’s life, waiting two or three loads for it to get cached is insignificant.

Dataplex is also designed to be CPU-friendly, eating between 1-3% depending on your activity. The software is AMD and Intel compatible, but is limited to Windows 7 at this time. It of course works great in desktop PC environments, but there are also several notebooks like the ThinkPad W520 that support multiple drive options, where Dataplex would absolutely soar.

When we reviewed the RevoDrive Hybrid and Synapse, we were limited to synthetic benchmarks only because the Dataplex software wouldn’t allow us to work with the drive in a raw state. That changed recently with some smart thinking and cooperation from NVELO to get our real-world traces working with the OCZ RevoDrive Hybrid and Synapse Cache platforms. Needless to say, the results are very impressive.

To understand why this is important, we try to focus on real-world conditions on drives we test. For the average user, trying to translate random 4K write speeds into an everyday situation is pretty difficult. It helps when comparing drives in every setting possible, but it doesn’t exactly work out into faster everyday usage or better game loading times. For this reason we turned to our StorageMark 2010 traces, which include HTPC, Productivity, and Gaming traces to help readers find out how a drive might rank under their conditions. 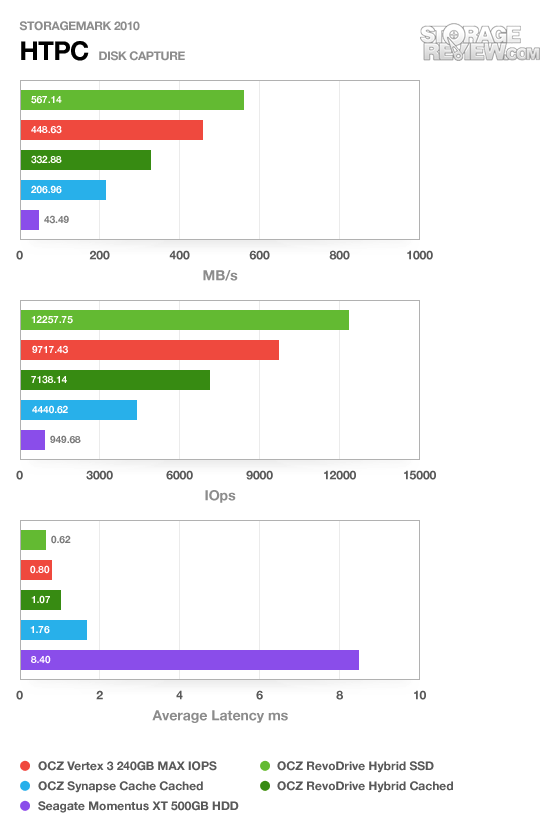 Starting with this benchmark, it shows two things: first is real-world cached speeds compared to a straight SSD come up slower than with straight synthetic benchmarks and the second is watching the benchmark run you see how quickly the caching happens. While not shown on this chart, we could see speeds measure higher on the cached solutions than what appeared running on the bare hard drives alone. By the second benchmark run it was fully cached and operating in its sweet spot. While the Synapse Cache wasn’t able to keep up with the Vertex 3 MAX IOPS, most of this comes down to the difference in NAND flash configurations. The Synapse has slower asynchronous NAND while the MAX IOPS is loaded with much faster Toggle NAND. 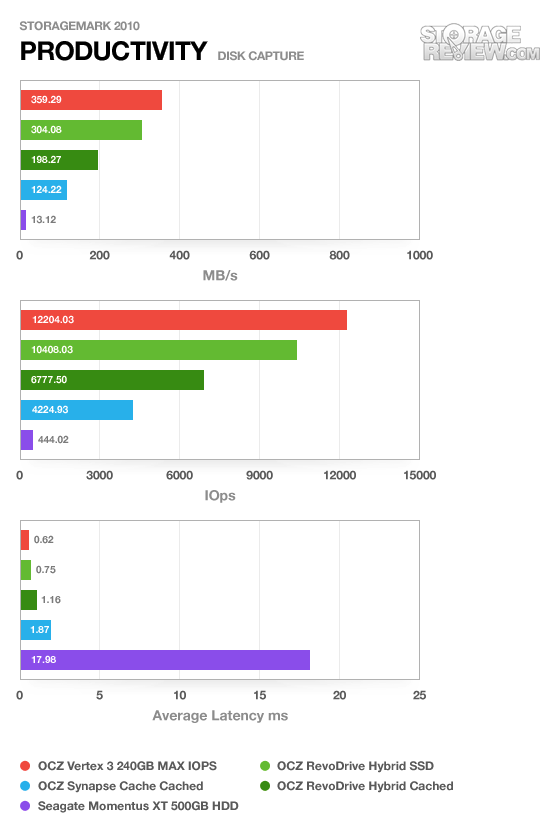 Our productivity trace helps paint a clearer of the real-world cached speeds, which both the RevoDrive Hybrid and Synapse Cache come up under the straight SSD alternative. These speeds are still much greater than other caching solutions like the 500GB Momentus XT, which only scored 13MB/s average in this trace though. The main point to understand is with the RevoDrive Hybrid users get 1TB of usable space to work with versus the 240GB on the Vertex 3 MAX IOPS or the 2TB (or unlimited when the size limitation is dropped) with the Synapse Cache option. The value proposition really comes down to performance per GB per dollar. 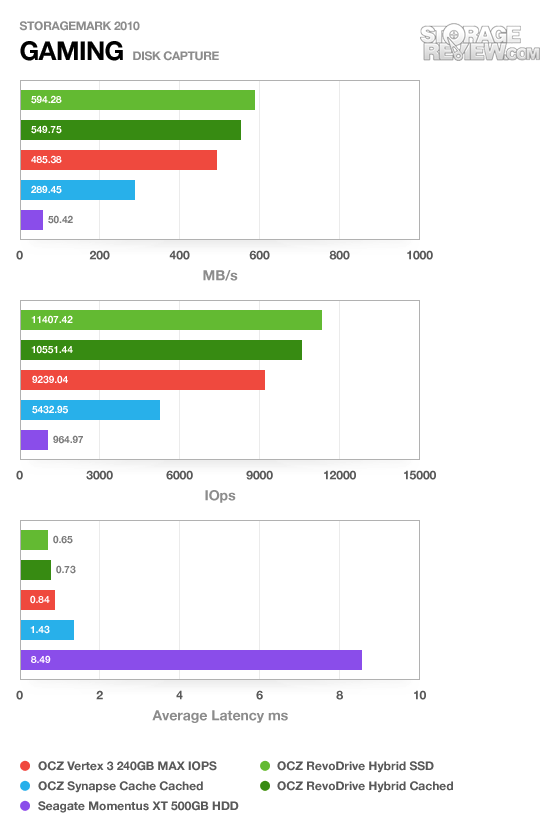 The gaming trace puts a heavy emphasis on read speeds, which if the data is already sitting in cache, you get as close to SSD speeds as possible. This definitely shows through, with the gaps between each solution dropping versus what we saw in the previous two traces. Unlike what we measured previously in our synthetic benchmarks, we find the RevoDrive Hybrid pushing higher speeds than the Vertex 3 MAX IOPS in gaming once cached. The Synapse Cache also fared very well, averaging almost 300MB/s, compared to just 50MB/s average with the Momentus XT.

During each of our traces, comparing the straight SSD to cached SSD/HDD processor utilization showed at most a 2-3% uptick on the Intel Core i5-2300 in our Intel Test Rig. That was the same on both the RevoDrive Hybrid and the Synapse Cache. Another interesting note is that we were able to run each real-world trace several times in a row, then return to the trace that was run first–which still remained in the cache–delivering identical speeds.

To get an idea of how capacity, performance, and pricing works in with each drive, we broke it down by the numbers. We included the cost of each drive solution, its price per capacity, and then worked out how much value the user gets based off its score in our traces. Caching methods have a lot going in their favor since it can spread that high performance value over a larger drive, as it turns out the Synapse was always the best solution for a given scenario.

NVELO’s Dataplex software is pretty sweet, and by extension, so are the OCZ RevoDrive Hybrid and Synapse Caching SSD solutions. The software makes both of these products shine, delivering smart caching technology to the client user in a market with few alternatives. Sure, LSI’s caching software CacheCade is great, but that requires a RAID card and software license, setting you back $650 or more, not to mention drives. When compared to other high performance solutions as well, the Dataplex solutions come out on top on a performance per GB per dollar ratio.

The only downside for consumers is that Dataplex can’t be purchased directly at this time, you have to go through a drive manufacturer or reseller, of which OCZ is currently the only one. On top of that you are limited to Windows 7 at this time, although from the looks of it that’s set to change. NVELO’s posted job listings for device driver engineers fluent in both Windows and Linux environments. NVELO also aims to broaden their portfolio with new partnerships and may someday offer the software on its own. Either way, anyone wanting SSD speeds with hard drive capacities should be all over Dataplex-enabled solutions.