Unveiled during this year’s CES, the new Trion 150 SSD line has finally hit the market. Described by OCZ as the “ultimate HDD replacement” for both mainstream notebooks and desktops, the Trion 150 is specifically designed for first-time SSD buyers who are looking for an affordable way to update their HDD-based system to solid-state technology. The Trion 150 is also the direct successor to the Trion 100, which we found to be a fairly impressive drive for its price point with its excellent real-world performance.

Unveiled during this year’s CES, the new Trion 150 SSD line has finally hit the market. Described by OCZ as the “ultimate HDD replacement” for both mainstream notebooks and desktops, the Trion 150 is specifically designed for first-time SSD buyers who are looking for an affordable way to update their HDD-based system to solid-state technology. The Trion 150 is also the direct successor to the Trion 100, which we found to be a fairly impressive drive for its price point due to its excellent real-world performance. 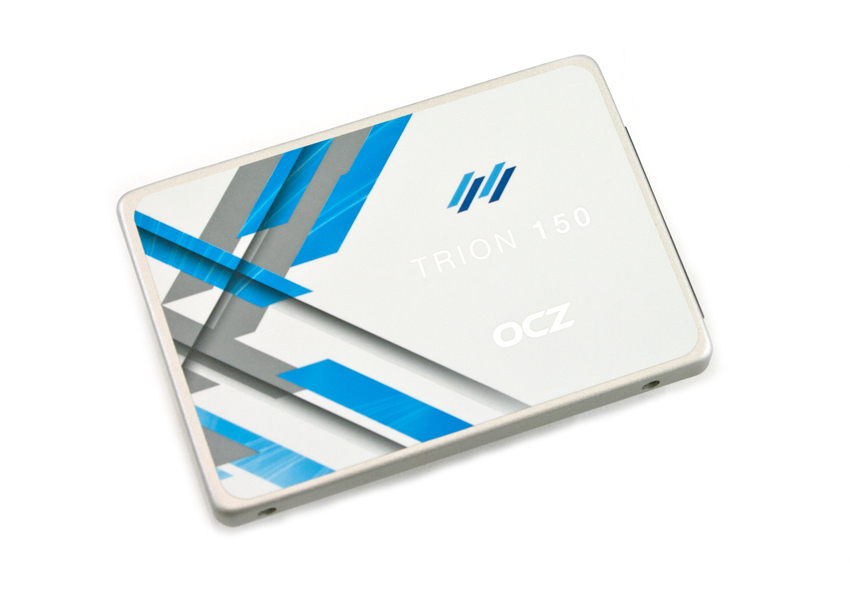 OCZ’s new SSD line leverages Toshiba’s 15nm TLC NAND flash technology (compared to the Trion 100’s a19nm NAND) and is quoted to deliver upwards of 550MB/s in sequential reads speeds and 450MB/s for sequential writes while random write I/O performance is quoted at 91,000 IOPS. Though the specifications are identical to the Trion 100, OCZ claims that users will experience up to a 50% increase in performance in many real world use cases. The new line also has endurance claims of 240TB TBW.

When it comes to warranty plans, OCZ has certainly set the bar high over the past few years with its ShieldPlus program. In essence, this warranty system eliminates the annoyances that are inherent of servicing faulty drives. It does this by removing shipping loops and costs to the consumer; simply provide OCZ support with the SSD’s serial number, and if it is deemed to be effective, you will be sent shipped a brand new drive (no receipt is necessary). This adds even more value to an already inexpensive drive. Overall, the whole package of the Trion 150 is quite attractive

The Trion 150 uses the same color scheme to other OCZ SSDs, though it has updated overall design. Its enclosure is comprised of an all-alloy build in an ultra slim, 2.5 inch form factor using a white/blue/light blue branding that works rather well. It’s very modern looking, which is something you don’t see very often on hard drives, as most of their life cycle takes place inside a computer. 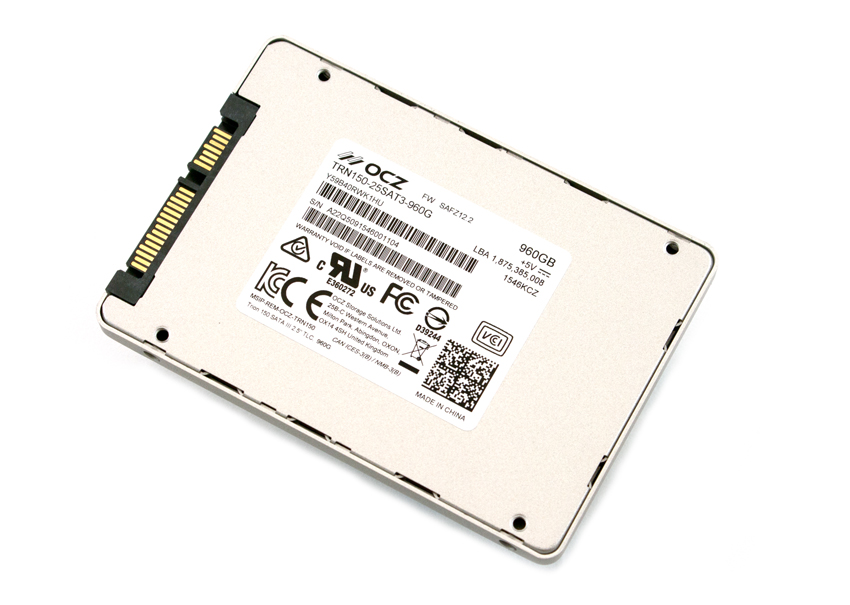 The back panel has a standard label, which includes the norm: serial numbers, model number,PNs, etc. The sides of the drive have two screw holes each for easy mounting while the front of the SSD has a standard SATA power and data interface. 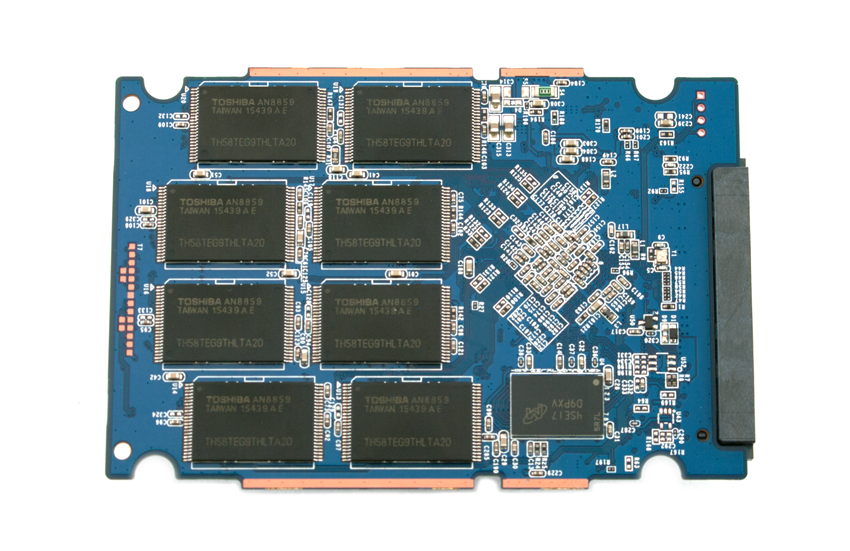 As we stated above, its small form-factor allows enables the new OCZ drive to be used from almost all applications such as ultrabooks and desktop PCs. 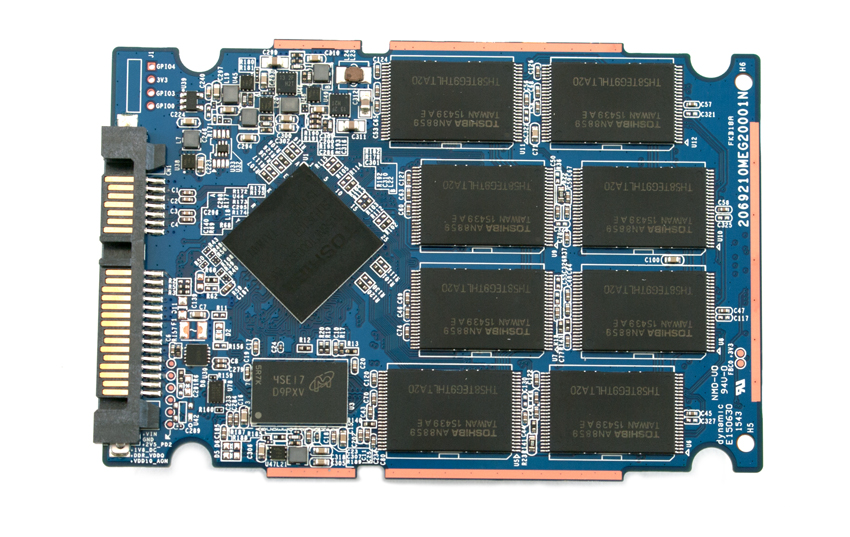 To access the interior of the drive, simply pop the top and bottom pieces of the external case apart. This will reveal the Toshiba controller and Toshiba 15nm TLC NAND.

All consumer SSD benchmarks are conducted with the StorageReview HP Z620 Workstation. We compared the Tiron 150 with the following comparables:

Our 4K write latency benchmark looks at both the average and maximum readings. Here, the OCZ Trion 150 960GB posted an average latency of 0.0401ms with 17.9ms in maximum latency. Again, the 480GB model had slightly higher average latency with 0.041ms; however, it had significantly lower maximum results with 9.66ms. 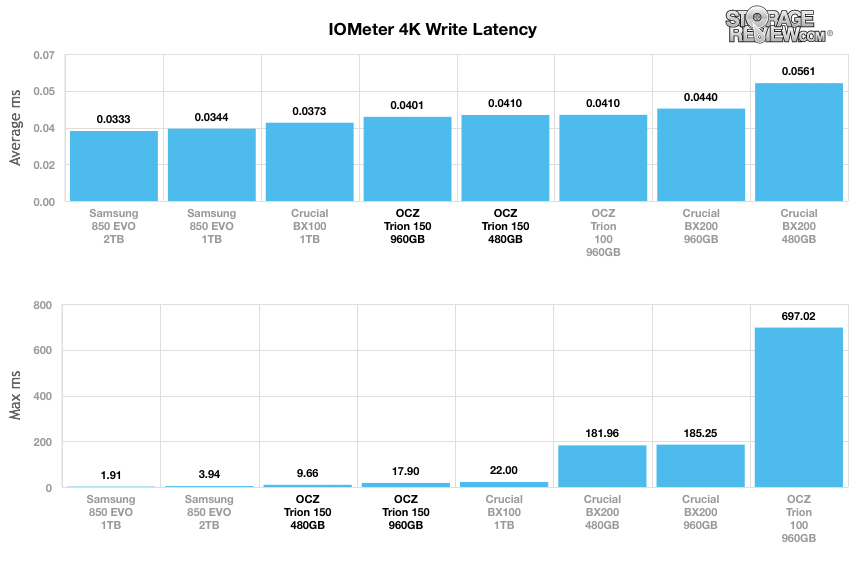 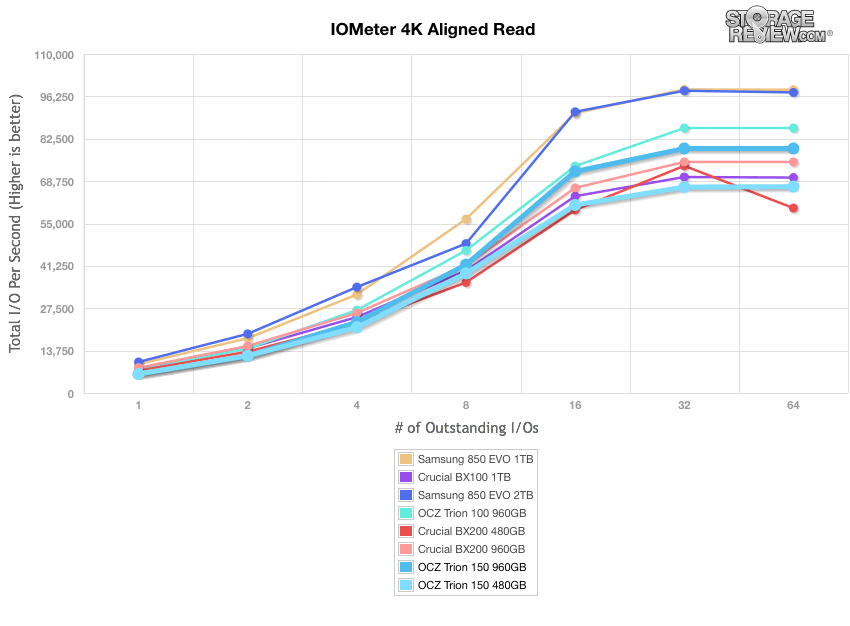 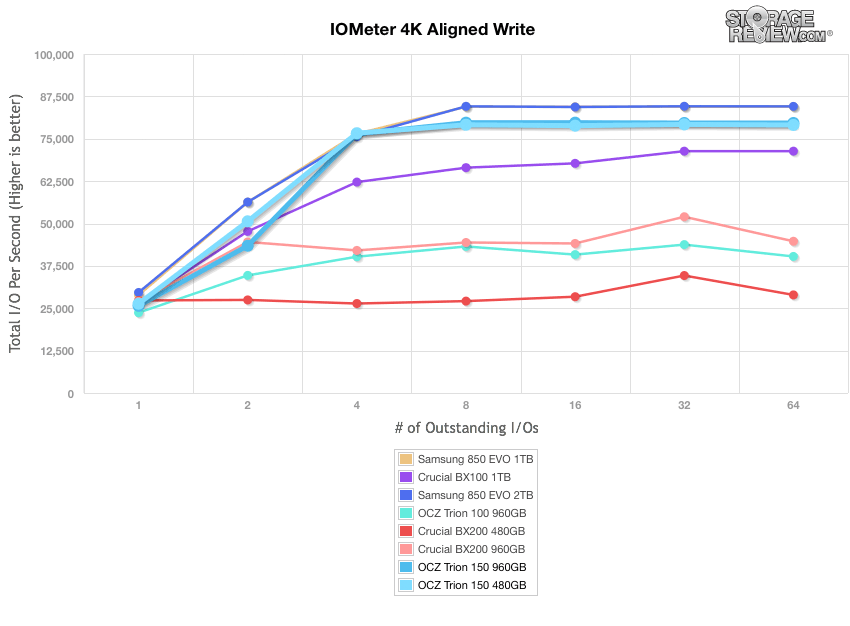 The first is our database profile, which consists of a 67% read and 33% write workload mix primarily centered on 8K transfer sizes. Here, the Trion 150 960GB had the weakest performance among the tested drives with an IOPS of 24,998.2 and 23,857.77 in the terminal for the 960GB and 480GB, respectively. The Samsung EBO 2TB was the runaway winner here. 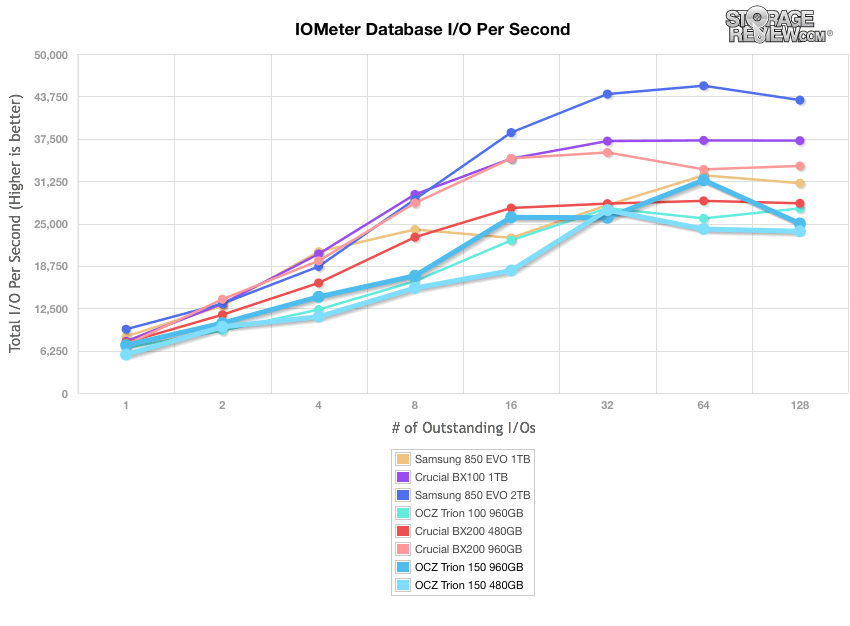 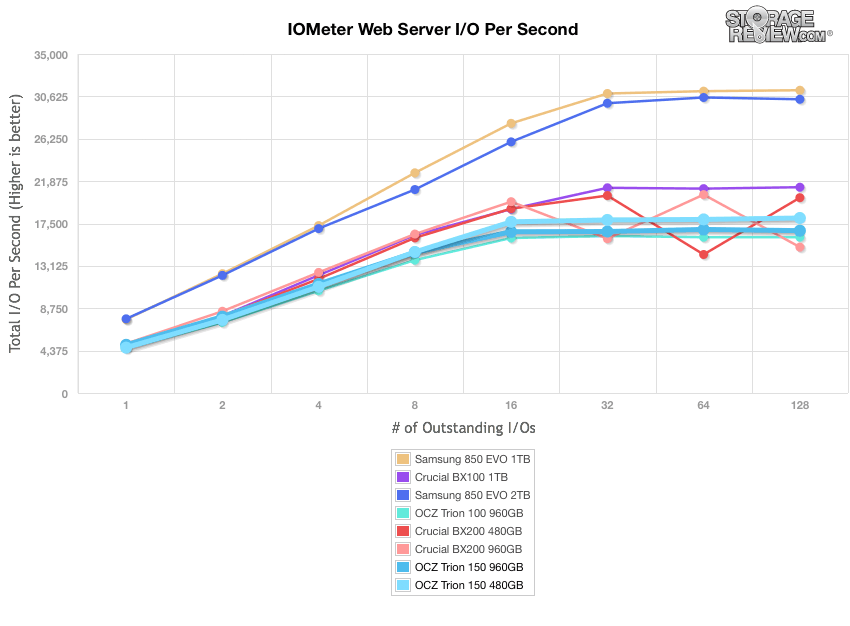 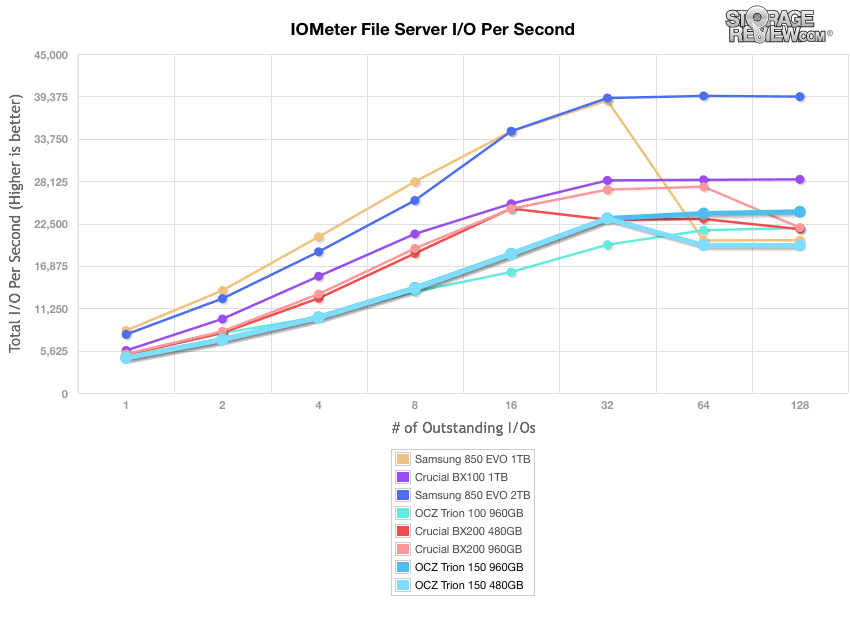 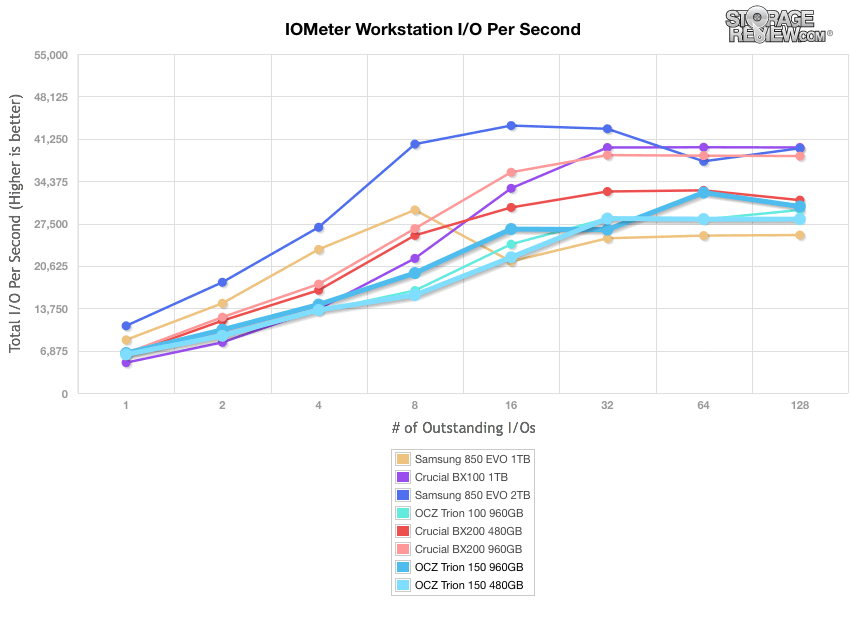 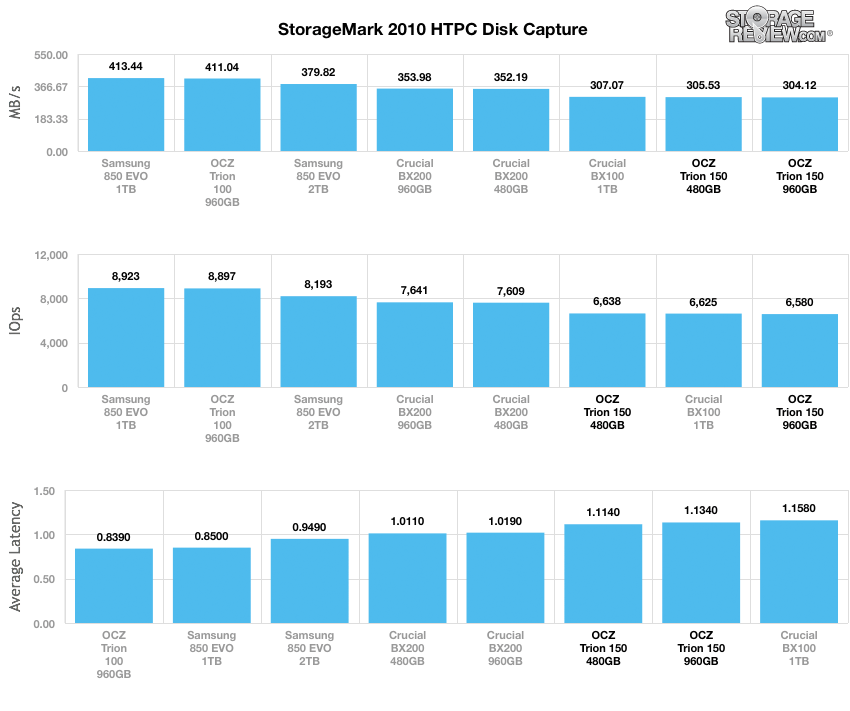 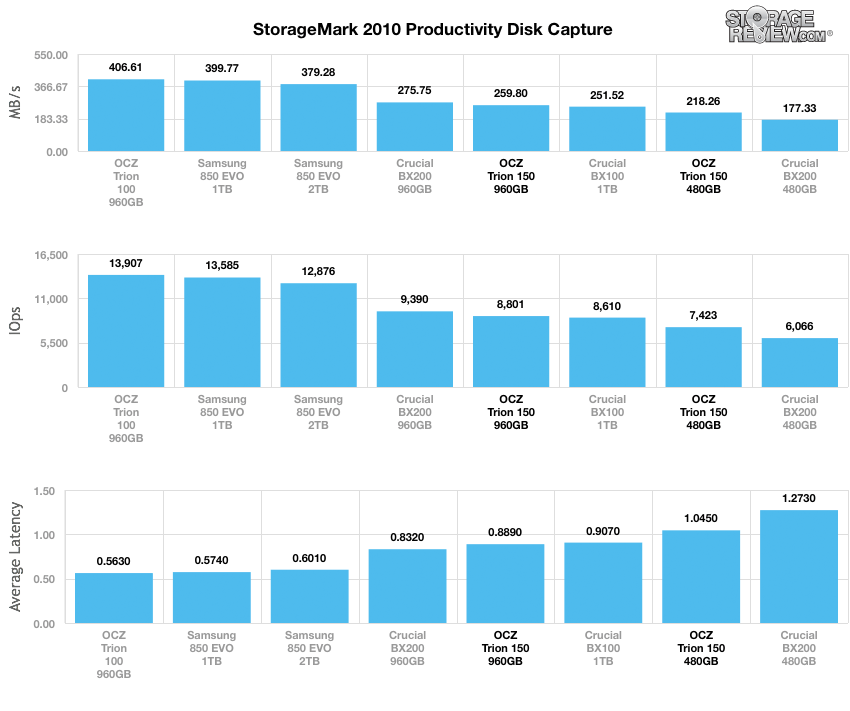 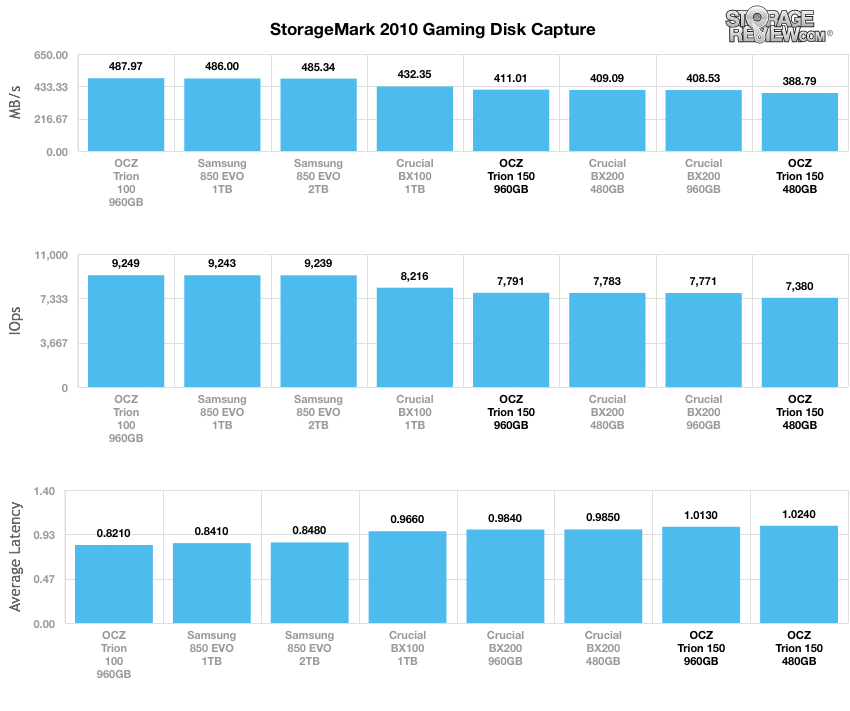 The Trion 150 is one of the least expensive SSD lines out there, bringing reliable solid-state drive technology to laptops and desktops looking for upgrades. It comes in a 2.5″ (7mm) form factor with the standard SATA 6Gb/s interface, Toshiba NAND, and a Toshiba Controller. Though mainstream consumers will likely see a huge increase in performance compared to their previous hard-disk drive setups, it doesn’t quite measure up to the higher-end consumer drives on the market like the Samsung EVO. That being said, OCZ certainly did not design the Trion 150 to compete with those drives in the performance category but rather focused on an ultra-low price tag and power efficiency; even more so than the Trion 100. Many first-time SSD buyers–which is its target demographic–will undoubtedly appreciate this.

You could almost say that OCZ’s ShieldPlus warranty program is worth the price of an OCZ drive alone. Return policies are often a pain for consumers when a product unexpectedly fails; both the wait time and the endless loops of communication. The ShieldPlus program gives OCZ customers a peace of mind that this will not happen: simply give them the SSD’s serial number and, if deemed faulty, they will immediately send you a brand new drive at no cost. The whole process works very well and it’s really nice to see something like this attached to drives as inexpensive as the Trion 150 line.

When looking at the details of its performance, results were a bit underwhelming. With the exception of the 2MB sequential and random transfer rates (which recorded an impressive 505.97MB/s read and 477.25MB/s write and 469.71MB/s read and 398.21MB/s write, respectively, for the 960GB model), the Trion 150 posted numbers that placed it either in the middle or at the bottom of the leaderboard. Though this was certainly expected, it even struggled to keep up with its predecessor, the Trion 100.

Ultimately, however, the Trion 150 performed as we expected. Power consumers who already leverage solid-state technology will undoubtedly avoid this drive; however, there are still many people who will find a ton of value and performance with the Trion 150. No matter how you look at its performance results, OCZ’s new drive will act as a significant upgrade to anyone who still uses HDDs as their main drive and at a very low cost. At a price tag at under $50 for their smallest capacity (120GB) and $270 for their highest (960GB), this is a fantastic price-per-GB ratio and even better than its predecessor, the Trion 100 (the 960GB currently goes for around $290 on Amazon and Newegg). You will also likely see the price being driven down even more later this year.