The OCZ ZD-XL SQL Accelerator is a duty-specific combination of hardware and software designed explicitly, as the name implies, to accelerate SQL databases. ZD-XL leverages an OCZ Z-Drive R4 RM series PCIe application accelerator as the flash storage layer combined with a host application to either accelerate a SQL volume on hard drives or accelerate a SQL database by placing it in flash. Its biggest differentiator though is a third option; if the situation calls for it ZD-XL can do both – accelerate a SQL volume on the flash card and cache large databases that reside on HDDs.

The OCZ ZD-XL SQL Accelerator is a duty-specific combination of hardware and software designed explicitly, as the name implies, to accelerate SQL databases. ZD-XL leverages an OCZ Z-Drive R4 RM series PCIe application accelerator as the flash storage layer combined with a host application to either accelerate a SQL volume on hard drives or accelerate a SQL database by placing it in flash. Its biggest differentiator though is a third option; if the situation calls for it ZD-XL can do both – accelerate a SQL volume on the flash card and cache large databases that reside on HDDs. 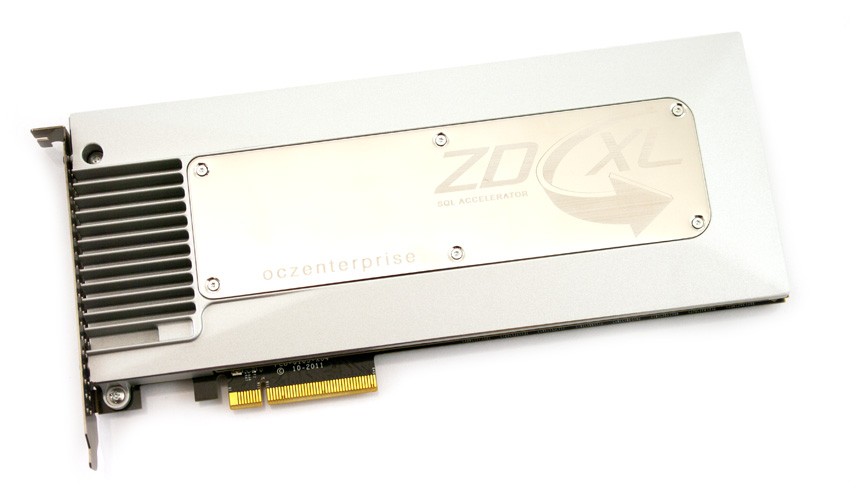 To better understand ZD-XL, let's break the solution into the core components of hardware and software. On the hardware side, as noted, the ZD-XL leverages OCZ's current line of R4 PCIe application accelerators that have the built-in capacitors to prevent loss of data in an unexpected power loss. Structurally there are a few modest design improvements, but in total the card is more or less the same as it's sold bare and in the ZD-XL configuration. On the software side, the card has a specialized firmware that works with a host system driver and ZD-XL software to accelerate SQL workloads. The net benefit is an easy to install and deploy solution that works into an existing SQL deployment with no need to replace what's currently operating. ZD-XL may also be deployed in an HA configuration across multiple hosts, should a more comprehensive solution be required.

In terms of configuring the solution for use, ZD-XL is one of the most flexible acceleration tools in the market. To speed the data path of SQL transactions, ZD-XL does a few things. First off, flash volumes can be created on the card to house tables like tempDB and log files to get the highest IO performance boost from the flash. This is a novel feature that is generally not available in other caching solutions. Most caching applications require consuming the entire cache pool available. Of course ZD-XL's bread and butter is caching hot spots present in databases that are either too large to fit within flash in their entirety, or there are other issues which make placing the databases entirely in flash impractical. The cache algorithm has been optimized for both OLTP and OLAP use cases and is designed to maximize hit ratio for these very different IO patterns. ZD-XL can be proactive as well, storage admins get the benefit of the option to pre-warm the cache when a high-demand workload can be anticipated. In total, the solution is fluid and can be deployed to meet the needs of a variety of SQL-centric environments.

ZD-XL is available in three capacities including a half height, half length form factor in 600GB and full height, 3/4 length 800GB and 1.6TB capacities. The solution comes with a three year warranty and dedicated FAE/FSE support. Our review unit is the 1.6TB capacity.

The OCZ ZD-XL Accelerator utilizes industry-proven Z-Drive R4 with a design overhaul to make it stronger and improve cooling. Both the ZD-XL and Z-Drive R4 use the same twin-board design, although the ZD-XL now includes a sturdy metal cover to improve rigidity as well as shed heat from the board into the server's airflow path. It also gives the product a huge facelift, showing a greater attention to detail as the PCIe Application Accelerator matured since it first launched.

The internal design of the OCZ ZD-XL incorporates eight LSI SandForce SF-2500 controllers, MLC NAND offering up to 40PB of endurance, and power-fail capacitors to flush data in-flight to NAND in the event of a power disruption. The 1.6TB card we're reviewing is a full-height, 3/4-length design, while 300GB and 600GB versions are offered which are a more compact HHHL design.

After installing the software, the card is immediately identified and users are driven through a wizard to configure ZD-XL. The configuration process is designed to be deployed by DBAs that understand SQL and how it's used in their environment. Terminology is therefore customized for this audience and SQL DBAs can be more concerned about performance acceleration than being experts in flash storage and cache tuning. 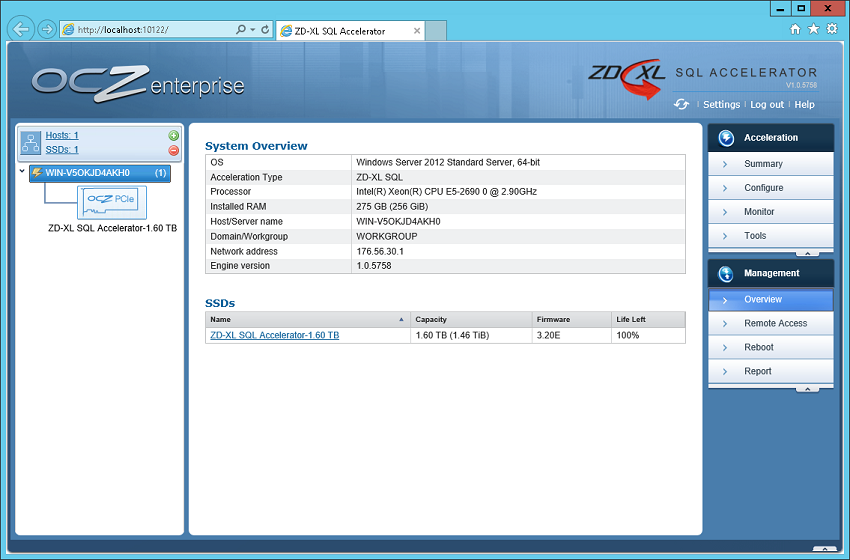 Users are guided through partitioning the card into part flash volume and part cache volume. This process is very unique in the PCIe Application Accelerator, which have traditionally been an all or nothing affair where the SSD can't be used for both purposes at the same time. 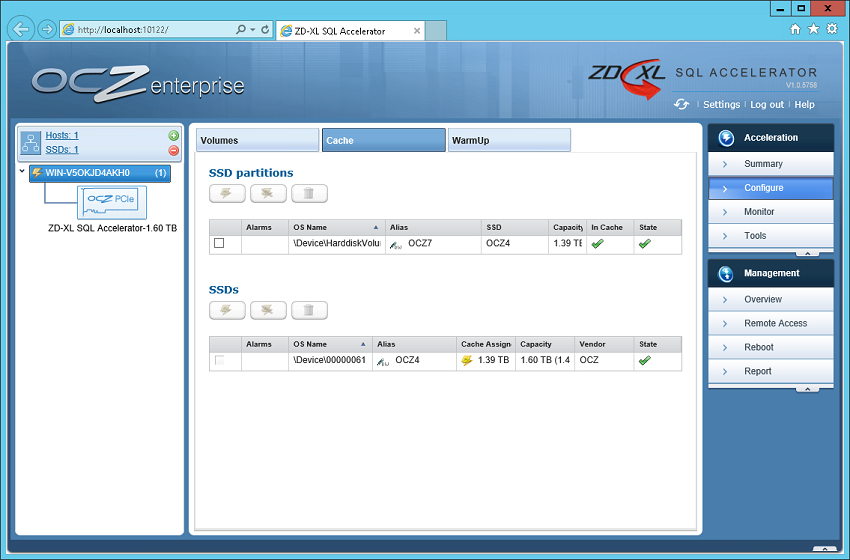 After partitioning the card users are taken through a step where you select the disk volume you want to cache and to select the database activity profile to hone its caching algorithm between OLTP and OLAP. 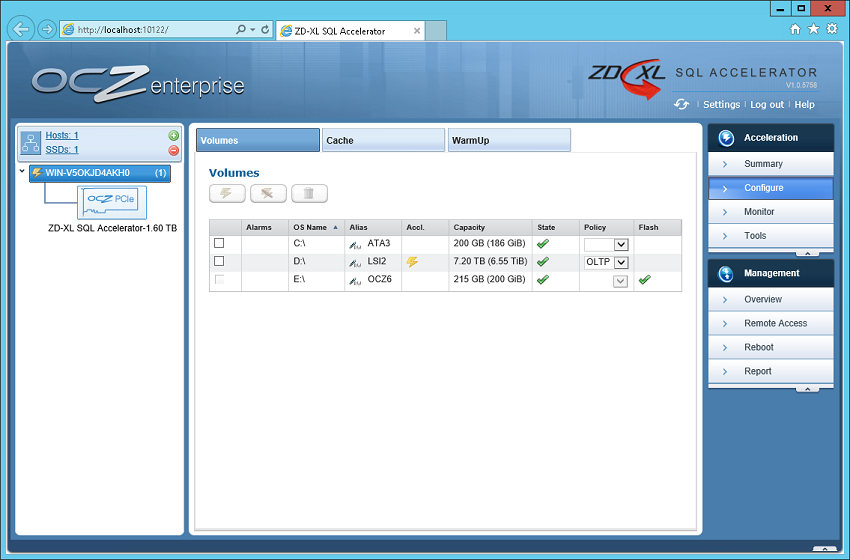 ZD-XL offers a pre-warm feature that lets the admin create an analysis file for each volume that can track activity over a period of time. When the pre-warm routine is run, the cache gets heated up with prospective hot data before the data is actually hot, giving the volume a little boost in performance immediately rather than waiting for the background algorithms to take effect. 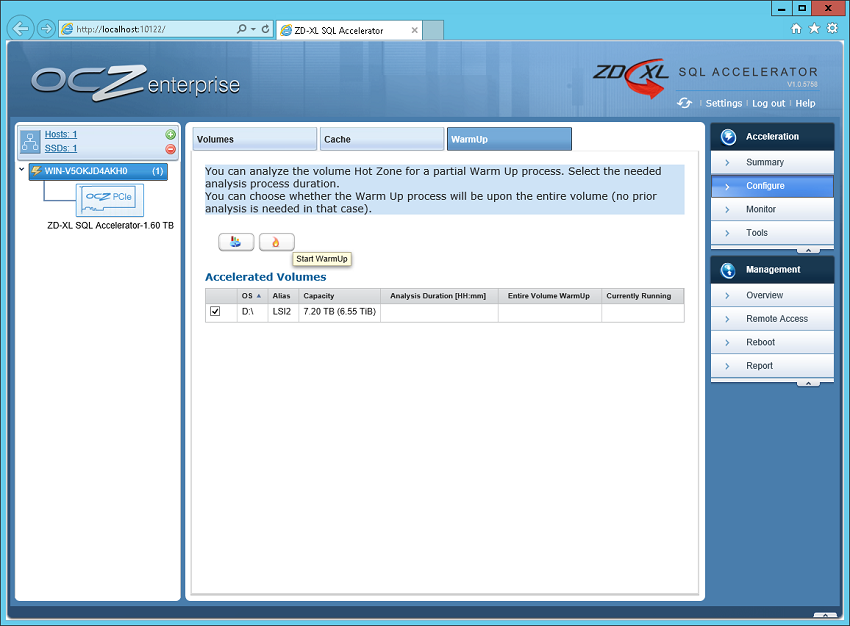 While the pre-warm feature is nice it falls a little bit short on the management side, there's no scheduling option and it's not possible to run more than one warmup routine against a volume. While not official yet, word from OCZ is that they are aware of these feature requests and that we'll likely see an updated pre-warm tool that is more robust in upcoming revisions. Users can also select a "warm volume" option which is a more broad approach to cache the entire volume without having to wait to analyze database activity. 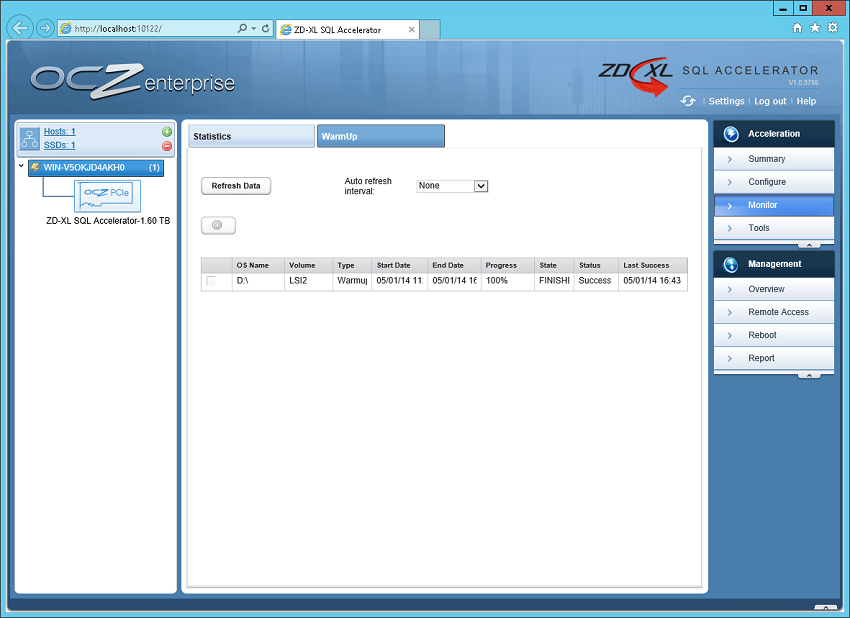 We incorporate details about our lab environment and testing protocols into reviews so that storage administrators and those responsible for equipment acquisition can fairly gauge the conditions under which we have achieved the published results. None of our reviews are paid for or overseen by the manufacturer of equipment we are testing. Additional details about the StorageReview Enterprise Test Lab and an overview of its networking capabilities are available on those respective pages.

In the enterprise market there is a huge difference between how products claim to perform on paper and how they perform in a production environment. We understand the importance of evaluating storage as a component of larger systems, most importantly how responsive storage is when interacting with key enterprise applications. To this end, we've rolled out application tests; in this review we've included our new SQL Server OLTP Benchmark.

Our analysis of the OCZ ZD-XL SQL Accelerator as a flash device includes three profiles comparable to our past enterprise storage benchmarks.

The OCZ ZD-XL SQL Accelerator offers some unique benefits compared to other caching products on the market, which have only let users configure an entire PCIe SSD as a flash device or a caching device, not both at the same time. OCZ was able to design that dual-purpose capability into the ZD-XL, allowing administrators to use some of it to caching certain databases, while allowing the user to still allocate some of it to a flash volume. To show how well the ZD-XL performs in that regard, we measured the performance of a 400GB section of the drive using our synthetic workload generator. 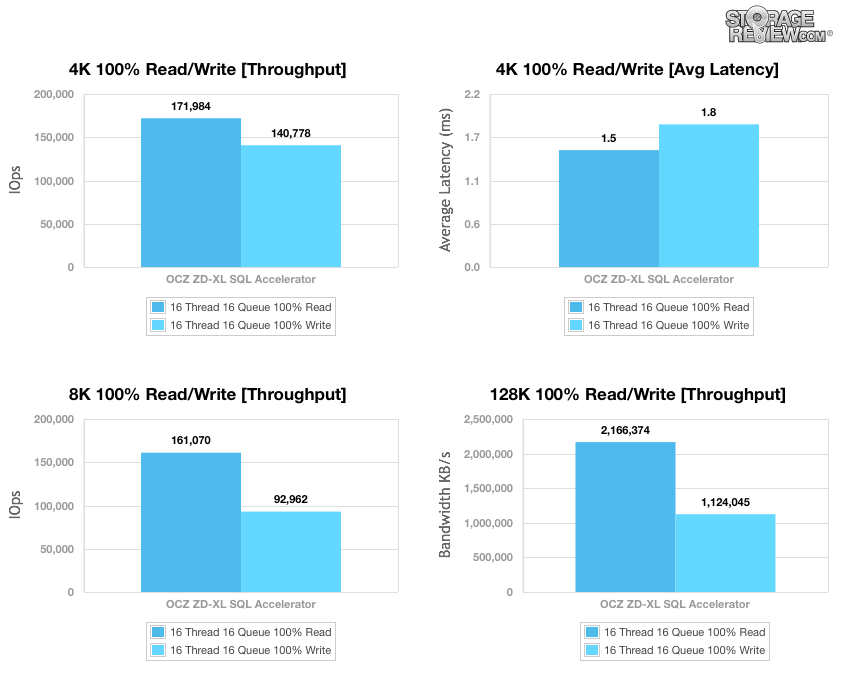 OCZ's ZD-XL SQL Accelerator offers a unique take when it comes to accelerating a very specific workload. In this case it's SQL, but long-term the software could be adapted to accelerate a variety of applications. ZD-XL has two components, the PCIe flash card and the software. While the R4 flash card is very capable on its own, laying in the ZD-XL software is the key differentiator. The software is flexible enough to let storage admins create volumes directly on the card for acceleration at the same time as accelerating SQL databases that are located on higher capacity, but much slower hard drives.

The GUI lets admins quickly decide how to configure ZD-XL for their specific needs; in our environment we set up the software a few times and managed to move along pretty quickly without needing to ask for support. Once ZD-XL is configured, there's little need to revisit the GUI regularly, unless to execute advanced features like the pre-warming of a database. Overall the GUI is functional but a little bit clunky, as these things tend to be, until the user has logged some time on the system. For their part OCZ recognizes the shortcomings and has shown us a preview of what's to come in terms of new functionality and features. Many of these updates address UI and enhancing existing features like the pre-warm option.

Turning to SQL performance, which is clearly the key with ZD-XL, in our OLTP environment we saw an improvement over a WD 10K SAS array by more than 100%. Given going from box to operational is under 30 minutes, there's reason for SQL admins to be enthusiastic about what ZD-XL can offer. Our testing showed the gains scaled under load, which highlights the benefits of injecting just a little bit of flash where HDDs start showing signs of bogging down under the weight of SQL transactions. Of course for those cases where a doubling in performance isn't good enough, ZD-XL allows for a database to be moved entirely within the flash on the PCIe card where performance gains are exponentially higher than just a HDD array.

The OCZ ZD-XL SQL accelerator gives businesses a big bump in SQL performance with modest changes to their existing environment. Performance gains for SQL doubled over 10K HDDs and databases that need more performance can be pinned to the PCIe flash. Given the ease of deployment and flexibility in configuration, ZD-XL is a worthy companion for those looking to get more out of their HDD-based SQL environments.